The Liberal government launch of $10 a day childcare through funding agreements with the provinces is the first new social program in some time. In fact, our polling at the time indicated that the childcare program was the most recalled budget item. The program would presumably benefit current and future young families and ultimately all Canadians by reducing the barriers to full employment among those who want to be engaged in the workforce. So, it is worth exploring how the issue has impacted the campaign.

The first thing that is notable is that the “Making childcare more affordable and available to people who need it” is of relatively low importance. Just 4% choose childcare as a top 2 issue from a list of policy areas.

Young people (under 30 years of age) are only somewhat more likely to say affordable childcare (8%) is a top issue.  It is the one of the top issues of importance for 14% of those with children under 5 years of age. But even among those with young children, reducing the cost of living (37%), making housing more affordable (27%), improving the health care system (24%) and growing the economy (18%) are more likely to be selected as a top issue.

When it comes to the parties and their leaders, Canadians give Trudeau and the Liberal Party the edge on the question of who would be best at making childcare more affordable and available for those who need it. O’Toole and Singh are basically tied. 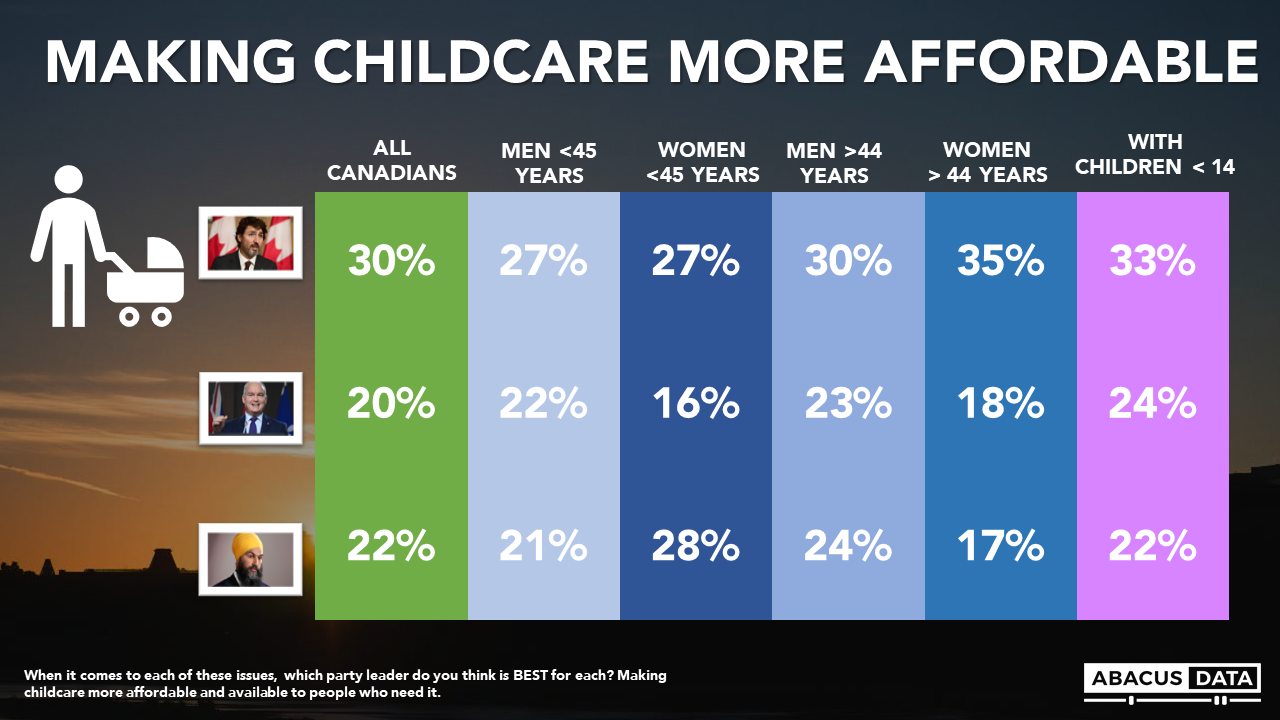 It is striking though that the Liberal Party does not have a bigger advantage among young people or those with children. In fact, Singh and the NDP are tied with the Trudeau and the LPC among women under 45 years of age and the Liberal edge among men under 45 is smaller than for Canadians as a whole. Younger women differ from their older counterparts in leaning more to Singh and less to Trudeau. The Liberal Party edge over the Conservative Party is also narrow among those with children under 14 right now.

While O’Toole and the Conservative Party trail Trudeau on the question of who would be best on the issue, an analysis of their competing childcare proposal highlights how close the parties are on the issue from a voter perspective. The Liberal and Conservative plans for childcare have the same proportion of voters who think that they care about it and are more likely to vote for the party because of it. The Conservative Plan has more people who would vote against the party because of their proposal but it is a modest difference. 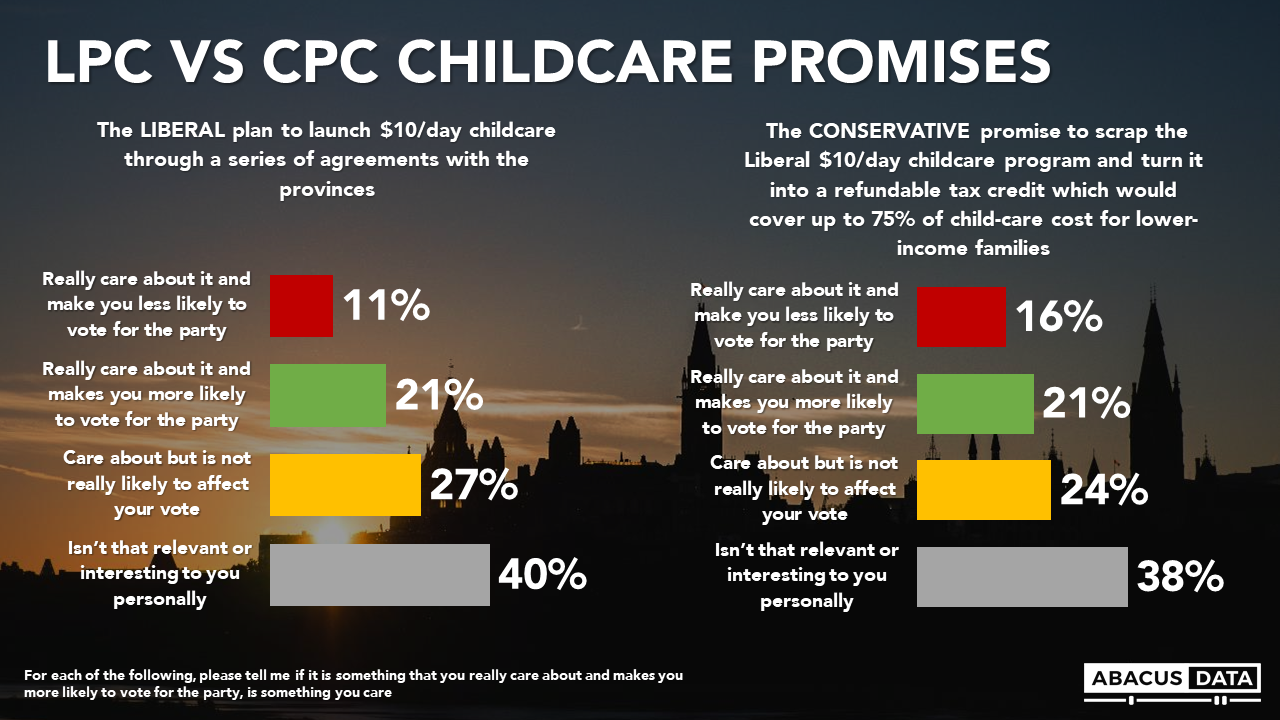 The two plans are also evaluated very similarly by those who have children under 14 years of age. Among those under 45 years of age, gender does not make a large difference in being motivated by either plan. Men under 45 are slightly more likely to be motivated by the Conservative Plan. The gender-age gap is more pronounced among older Canadians as women 45 years and older are much less likely to be motivated to vote Conservative by the tax credit promise. 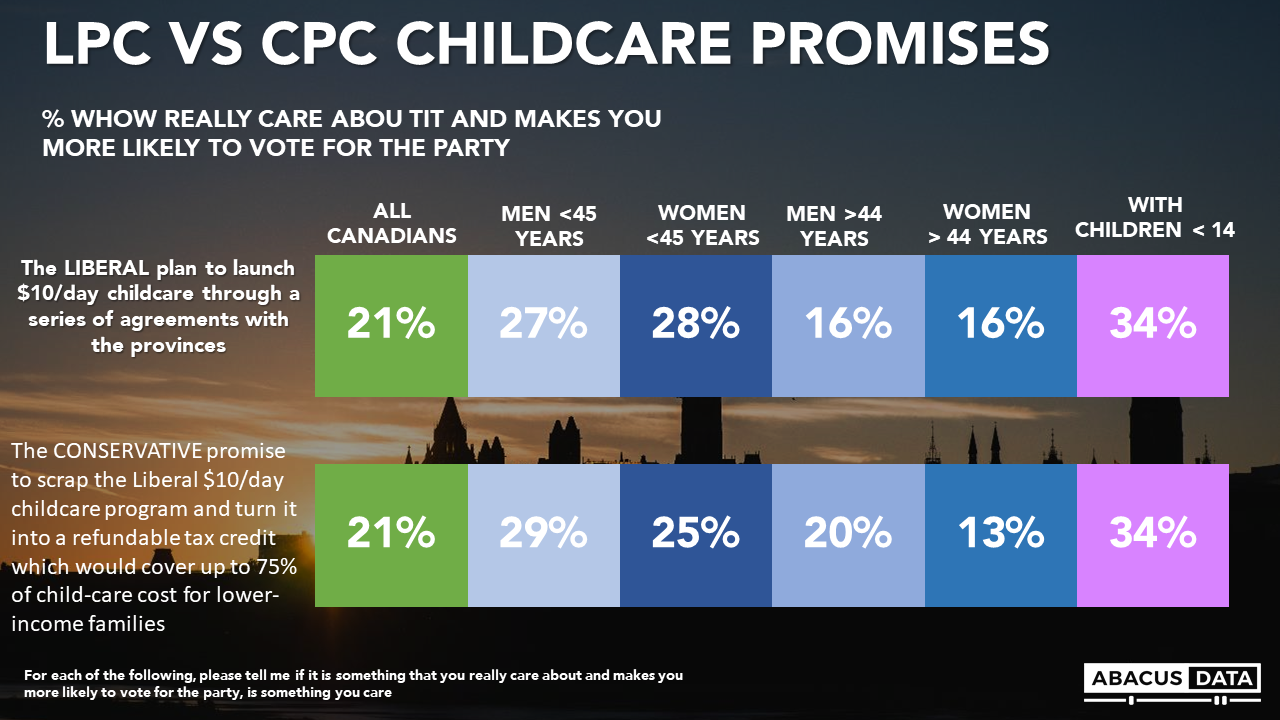 According to Richard Jenkins: The Liberal childcare proposal accomplishes one important thing for the party in the election, which is to establish its social conscience and progressive orientation. The electorate overall thinks the Liberals would be the best on childcare so staking out a position on the issue is on brand and aligns with voter expectations.

The challenge is that few voters are telling us that this is the issue that will define the election for them. And, perhaps surprisingly, the Conservative proposal on the issue performs quite well even among young Canadians. And it is young voters and young families in particular that the Liberals may need to secure their re-election.

Our survey was conducted online with 2000 Canadians aged 18 and over from August 24 to 29, 2021. A random sample of panellists was invited to complete the survey from a set of partner panels based on the Lucid exchange platform. These partners are double opt-in survey panels, blended to manage out potential skews in the data from a single source.

The margin of error for a comparable probability-based random sample of the same size is +/- 2.2%, 19 times out of 20. In Canada the data were weighted according to census data to ensure that the sample matched Canada’s population according to age, gender, educational attainment, and region.