With less than 150 days until Americans choose a President for the next four years, Abacus Data (one of Canada’s most accurate pollsters in the 2019 Canadian federal election) surveyed 1,500 Americans on their feelings about the choice coming up, and also about Canada-US relations.

This is the second in a series of releases this week.

ONLY 42% BELIEVE TRUMP WILL LEAVE PEACEFULLY IF HE LOSES

Most Americans (58%) believe Donald Trump will try to find ways to overturn or ignore the election to stay in office if he loses the vote this fall. This is the majority view in every region of the country, from the Northeast to the Southwest.

Majorities of Hispanic (68%), Black (77%) and White voters (53%) believe Trump would try to hang on. Majorities of Democrats (79%) and Independents (64%) feel this way. A majority of Republicans (73%) say Trump would leave peacefully, but one in four do not believe that. 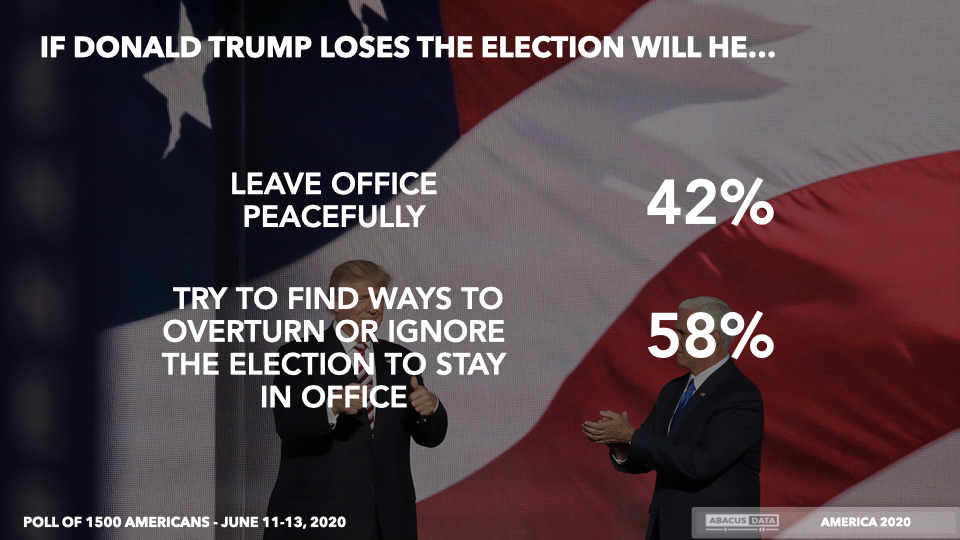 TRUMP SUPPORTERS BELIEVE A LOSS WOULD MEAN ELECTION WAS RIGGED

Just over half (54%) of Republican voters polled believe that if Trump lost this November it would mean the system was rigged against him, rather than because “more Americans wanted him out of office”. Among those who intend to vote for Trump, 57% would see a loss as evidence of a rigged system.

Across the country, a 74% majority would believe a Trump lost was about people wanting a change. White voters (30%) are more than twice as likely as Black voters (12%) to think a Trump loss would mean the election was rigged. 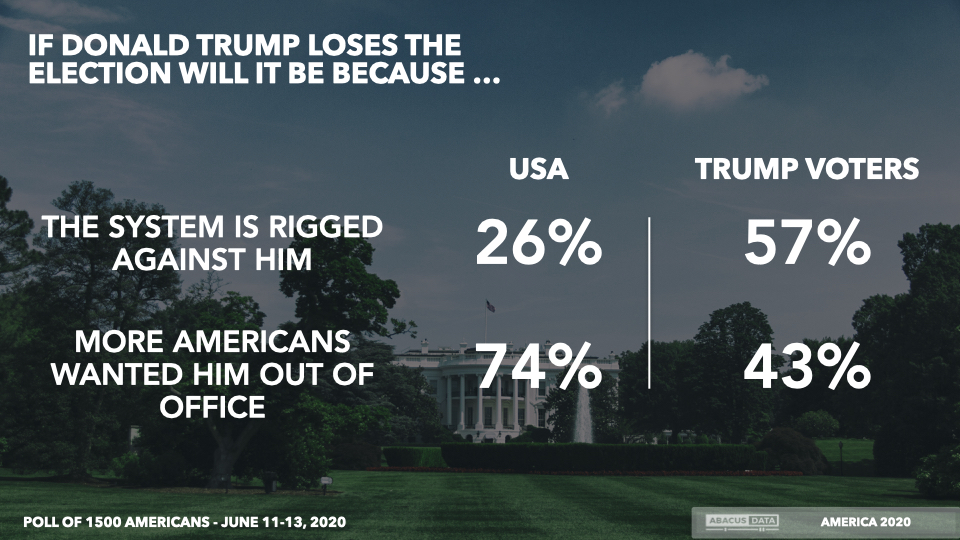 MOST (BUT NOT AN OVERWHELMING MAJORITY) SAY IF TRUMP LOSES AND REFUSES TO LEAVE, MILITARY MUST STEP IN TO FORCE HIS REMOVAL

A remarkably modest majority of those polled (62%) say that if Trump lost and refused to leave office that he should be forced out by the US military. Voters under 30 (74%) are more likely than average to believe this should happen, but voters over 60 are evenly split (50%-50%).

Only 40% of Republicans and 40% of Trump voters believe he should be forced to leave office is Trump loses and refuses to step aside. 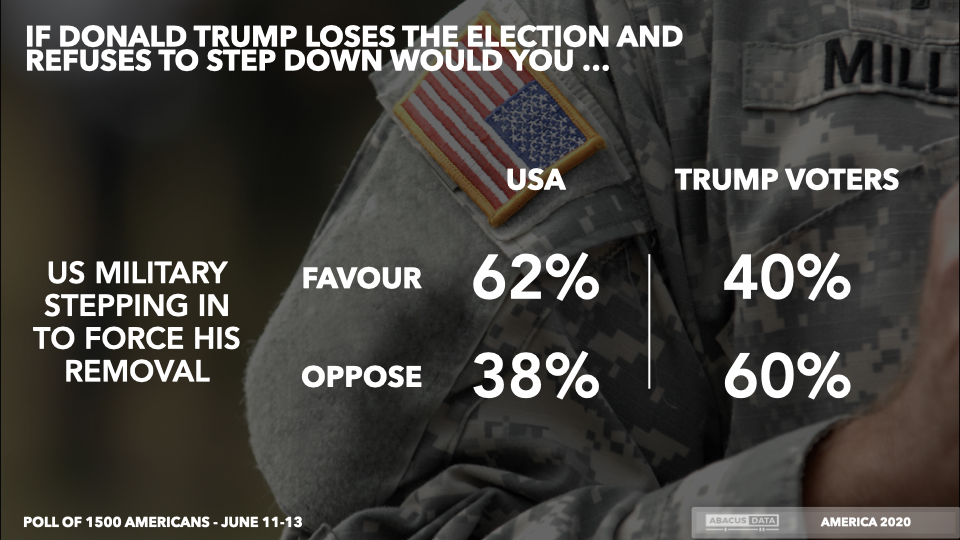 According to Bruce Anderson: “The legitimacy of America’s electoral system is, in the eyes of many voters, under a cloud. Most Trump voters think if he loses, the system was rigged, and a remarkable number would like to see him try to stay on even if the vote totals don’t go his way. That most Trump voters wouldn’t support a forced removal by the military if he lost but refused to leave office is perhaps an even more pointed illustration of the fact that partisanship has the potential to contribute to a further breakdown in the system of rules and laws in the USA.”

According to David Coletto: “Although Donald Trump faces difficult odds for re-election, many Americans are not convinced he will leave gracefully or peacefully if he loses the November election. Our survey further highlights the wide partisan divide in American politics and deep suspicion by most Americans to President Trump’s motives.”

The survey was conducted with 1,500 American adults from June 11 to 13, 2020. A random sample of panelists was invited to complete the survey from a set of partner panels based on the Lucid exchange platform. These partners are typically double opt-in survey panels, blended to manage out potential skews in the data from a single source.

The data were weighted according to census data to ensure that the sample matched the United States’ population according to age, gender, race, educational attainment, and region. Totals may not add up to 100 due to rounding.

Biden ahead by 14 among registered voters; Trump approval below 40%
Tags: 2020 ElectionAmerican politics