With less than 150 days until Americans choose a President for the next four years, Abacus (one of Canada’s most accurate polling company in the 2019 federal election) surveyed 1500 Americans on their feelings about the choice coming up, and also about Canada-US relations.

We will be releasing our Canada-US data over the coming week.

Donald Trump won the last election despite losing the popular vote by 3 points. However, our data suggests he has a bigger hill to climb this year, as he trails the presumptive Democratic nominee by 14 points among registered voters (49%-35%). 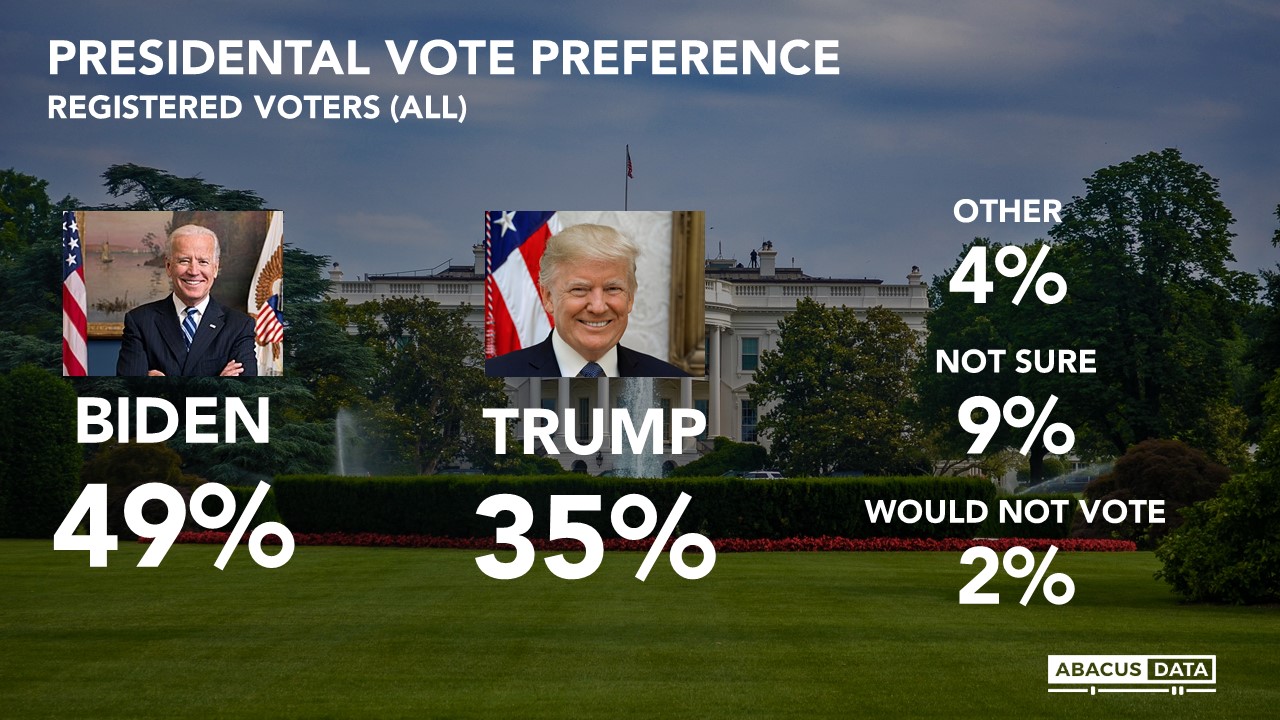 Among those most likely to vote (63% of the sample who say they are certain they will cast a ballot), Biden’s margin is 10-points over Trump (51% to 41%). If voter turnout surpasses that 63% threshold, Biden stands to benefit, as he leads by very wide margins among those who might vote.

Biden’s path to the White House requires reversing Trump’s 2016 success in key battleground states. Here the news is good for the Democrats. In swing states that Trump won in 2016 (FL, IA, MI, NC, OH, PA, WI) Biden leads by 17-points. Biden has a 22-point lead in solid Democratic states while Trump leads by a smaller 2-point margin in typically solid Republican states, although some of those states like Arizona, Texas, and Georgia are closer than in 2016. 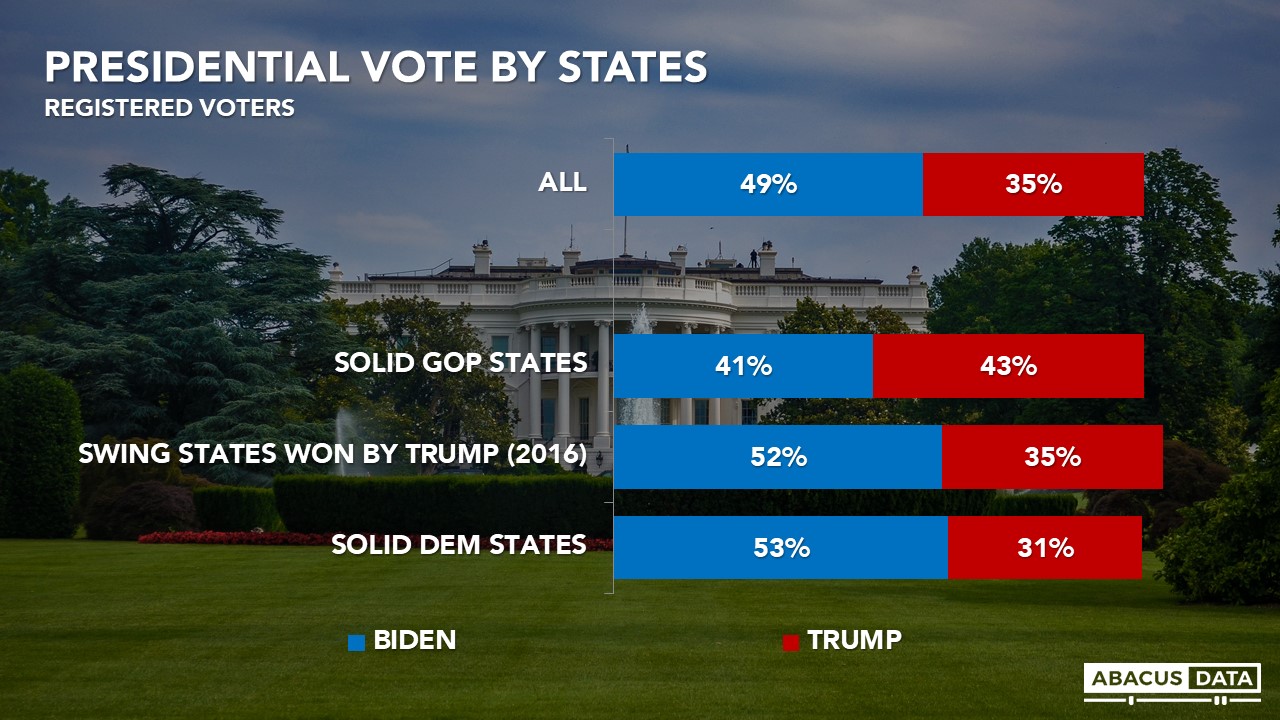 Biden leads by a wide margin among those 50 and under. Trump is competitive among registered voters 51 and older. 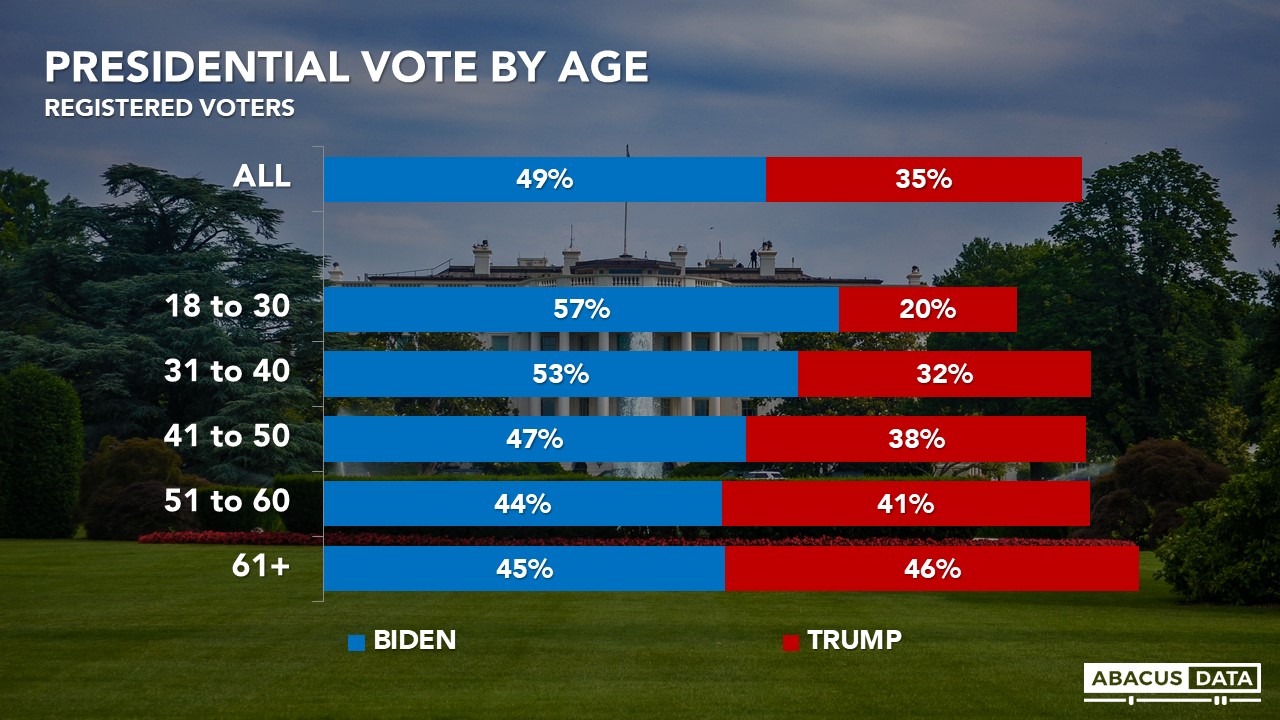 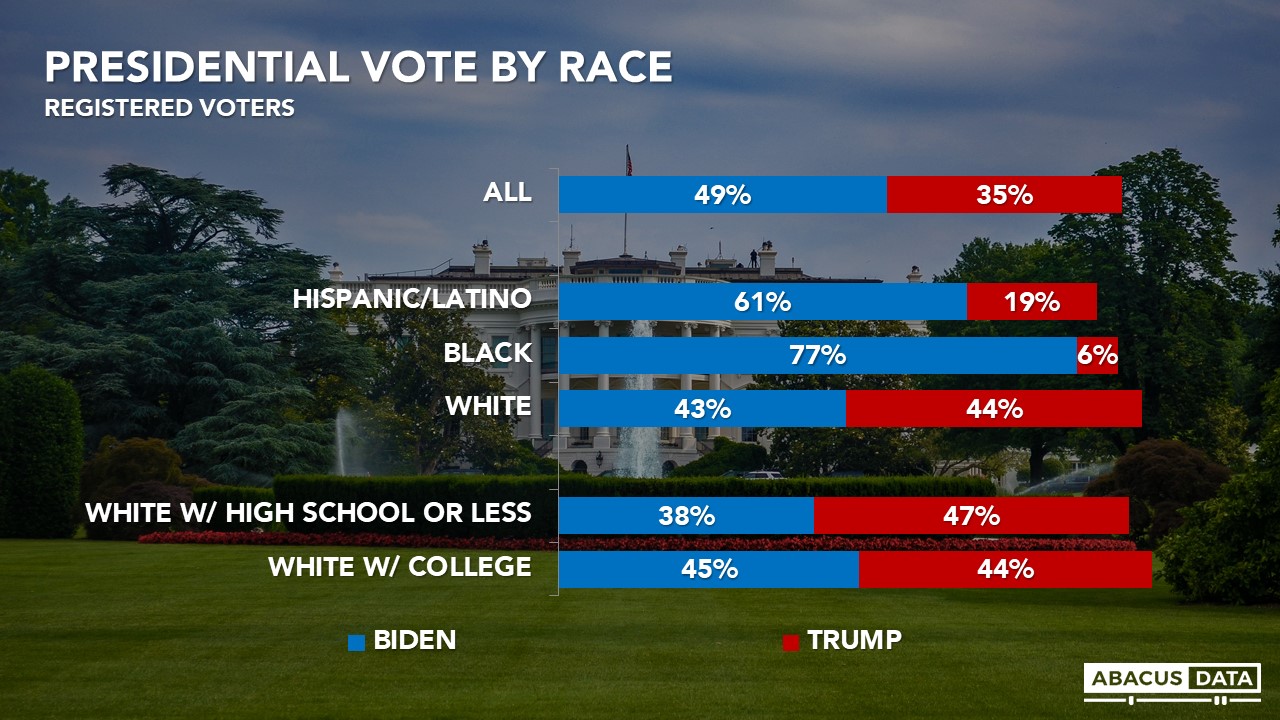 TRUMP LOSING THE BATTLE FOR INDEPENDENT VOTERS; BIDEN HOLDS ONTO CLINTON SUPPORT BUT GAINS AMONG PAST TRUMP VOTERS.

Registered Independents show a 20-point preference for Biden (42%-22%) and also appear more motivated to vote than in 2016.

Among those who did not vote in 2016 but are registered to vote, 49% would vote Biden while only 14% would vote for Trump. 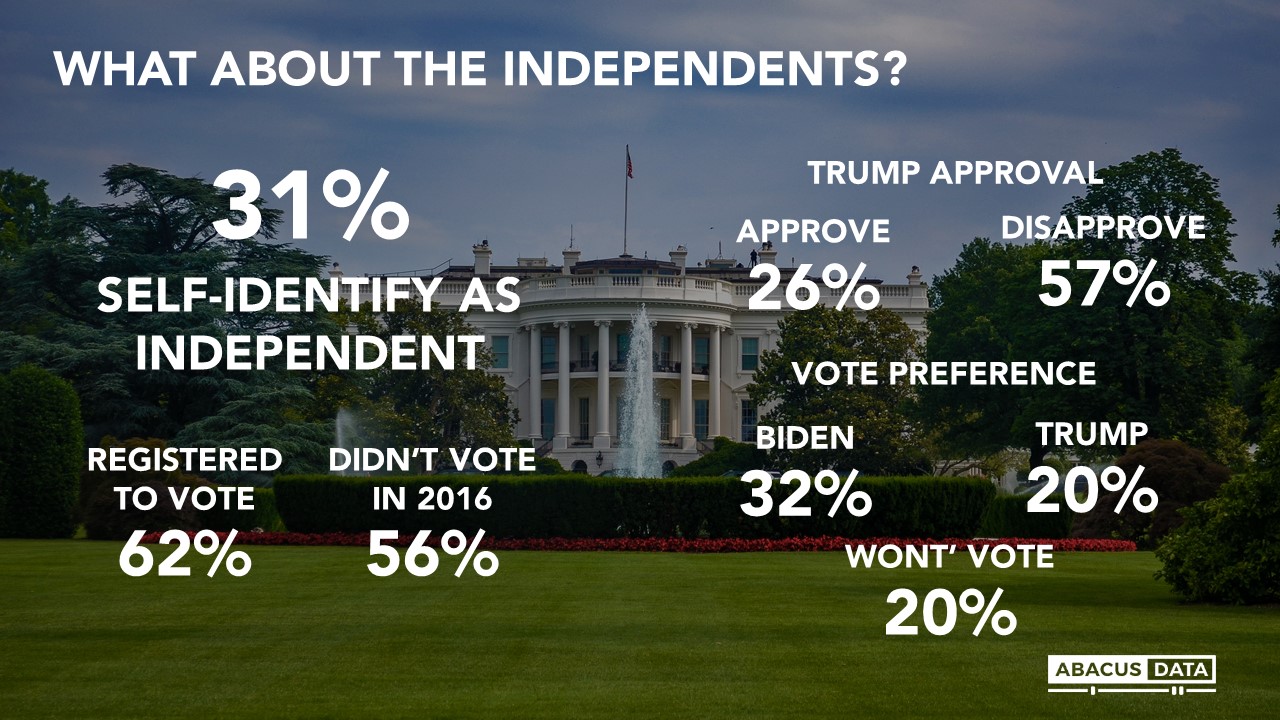 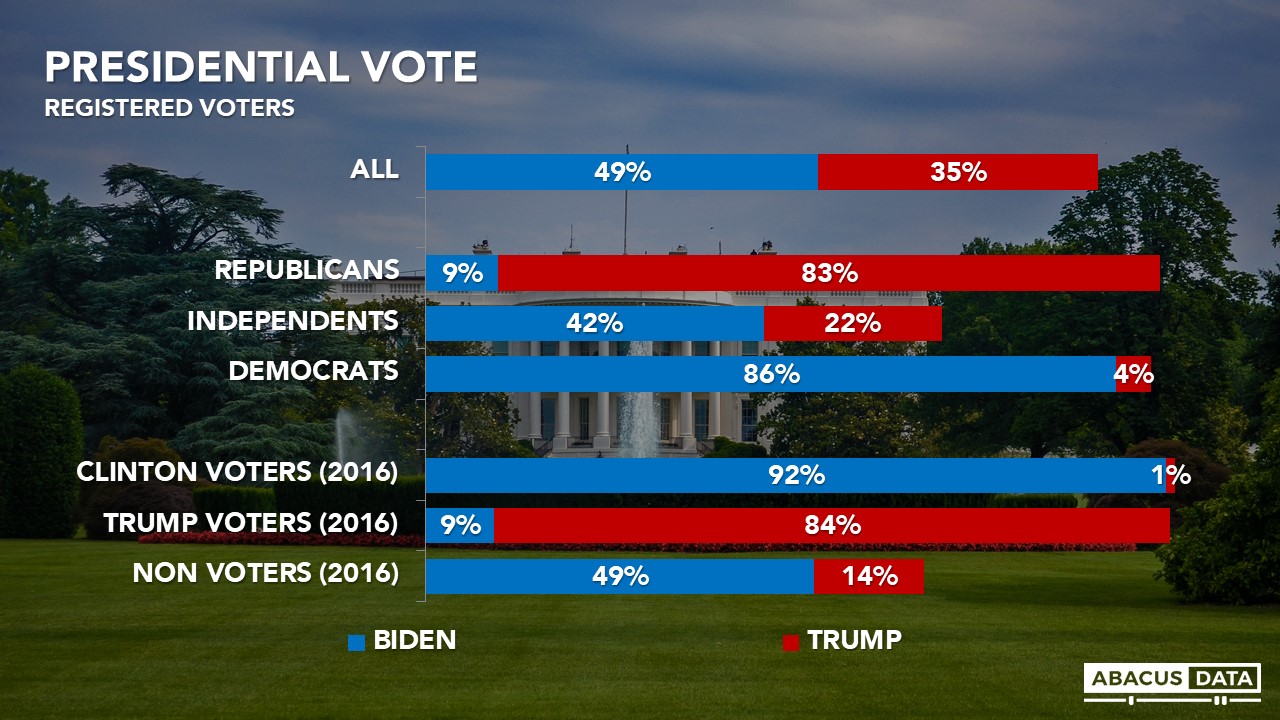 BIDEN PREFERRED, BUT VOTERS DIVIDED ON WHO WILL WIN.

When asked who they thought is likely to win the 2020 presidential election, 39% chose Mr. Biden while 36% chose Mr. Trump. 25% were unsure. 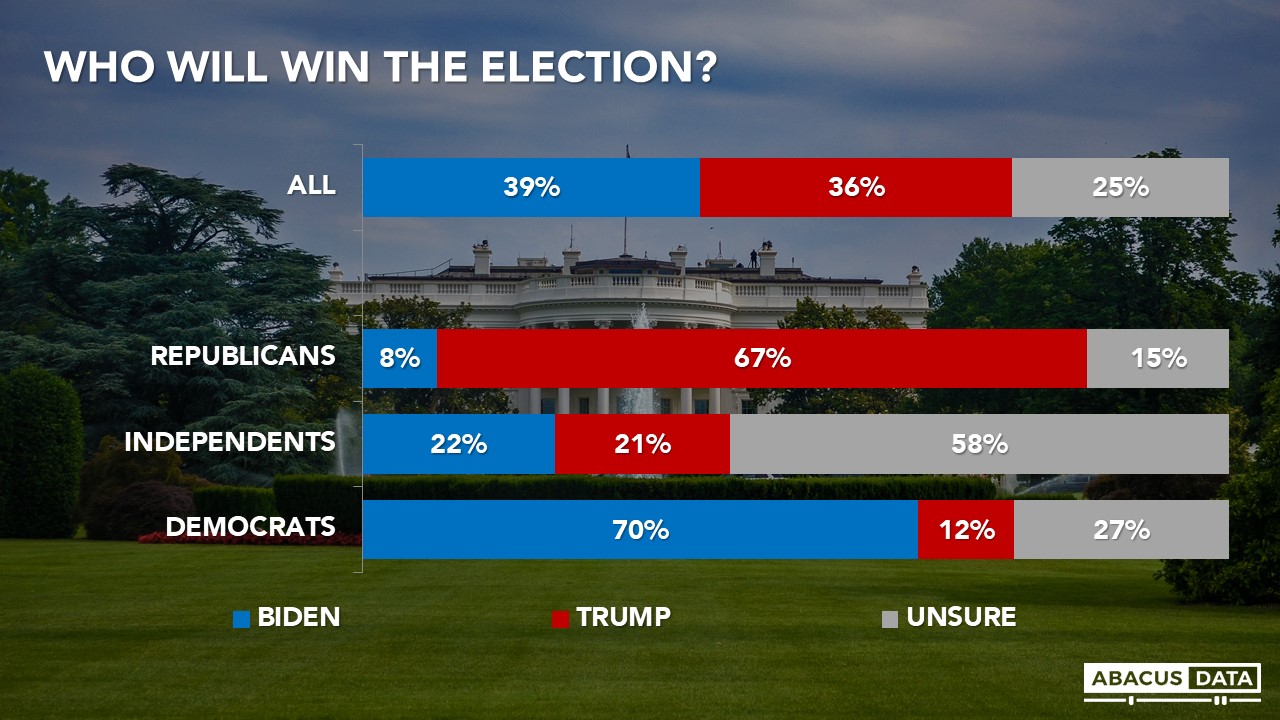 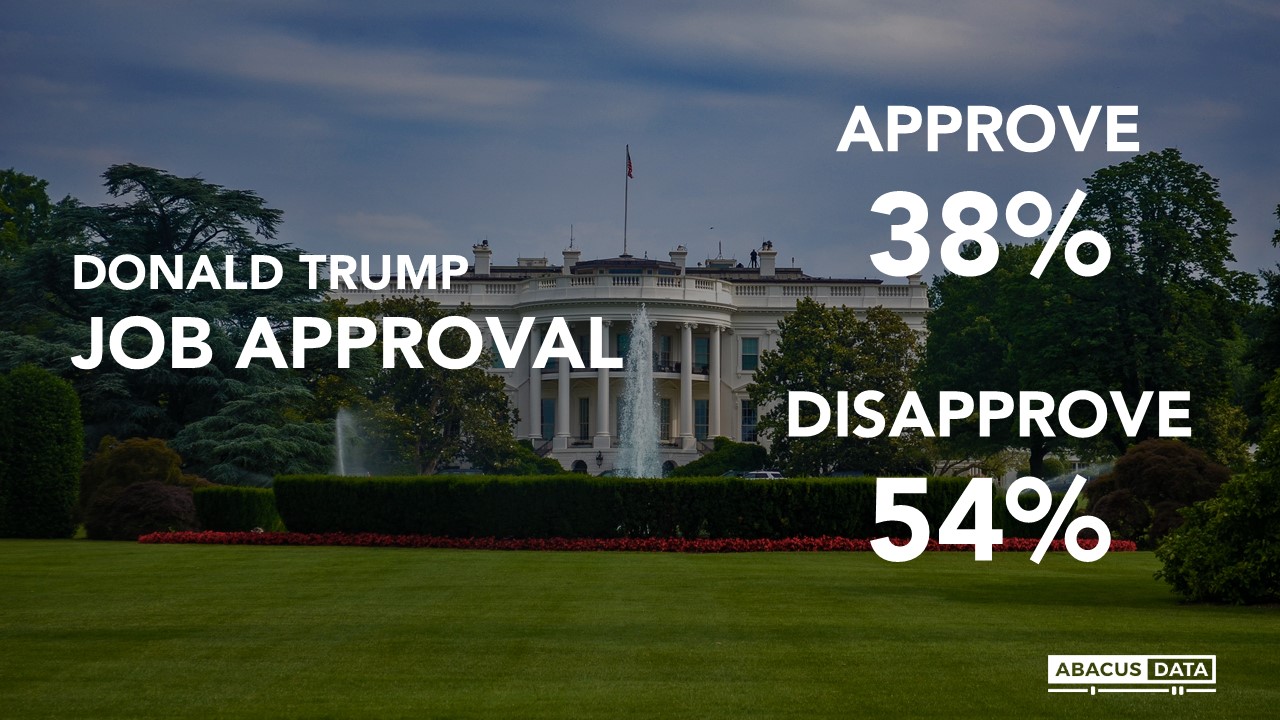 83% of Republicans approve of Trump’s performance compared 13% of Democrats and 26% of Independents. Whites are split with 46% approving and 48% disapproving while Blacks and Latinos overwhelmingly disapprove of the job he’s doing.

Younger Americans are the least likely to approve of Trump’s performance. Only 1 in 4 of those aged 18 to 30 approve, 15-points lower than any other age group. Those aged 61 and over are the most likely to approve, although Mr. Trump doesn’t even get to 50% approval with older voters. 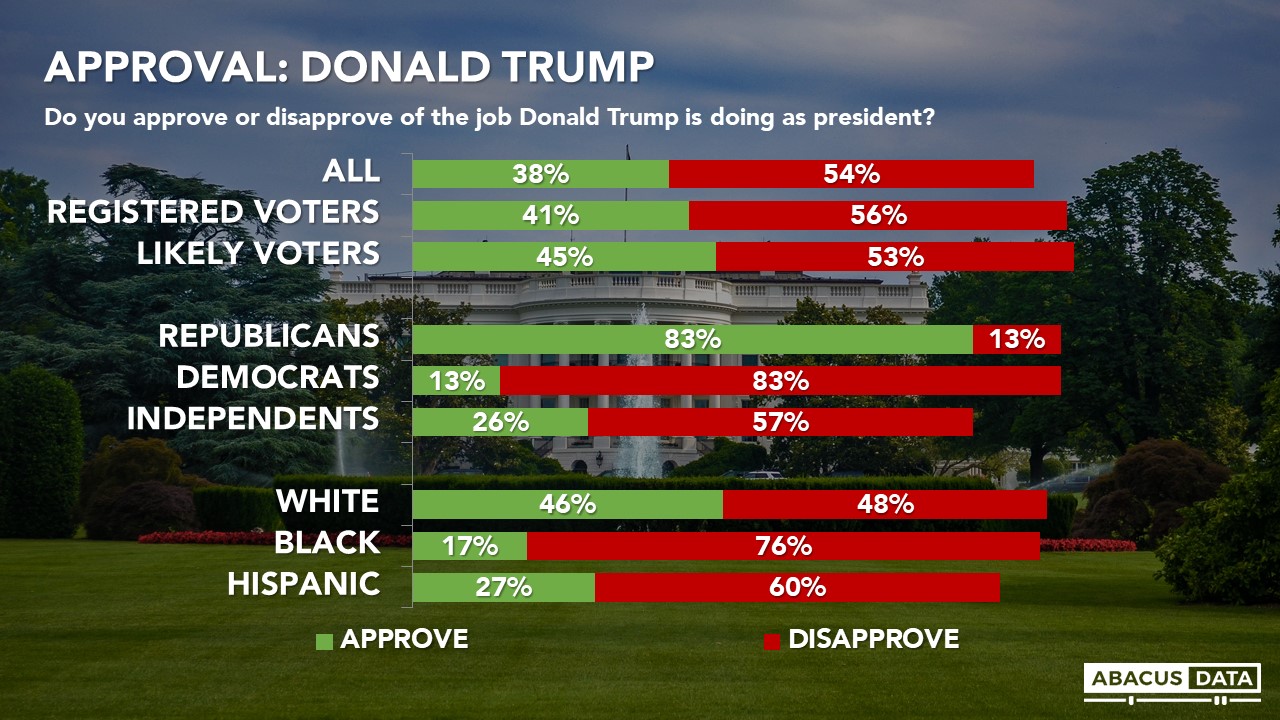 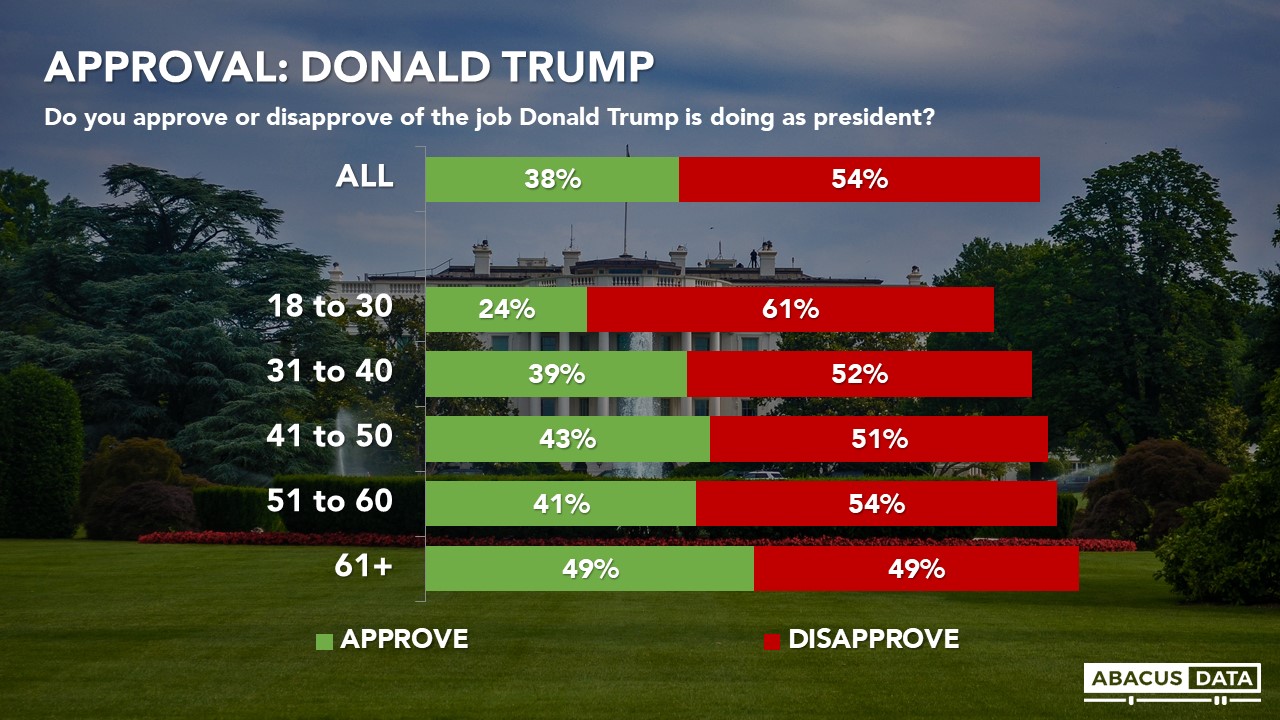 According to Bruce Anderson: “The challenge for President Trump is unmistakable, and with only a few months to go until voters decide on whether he gets a second term there are definitely more headwinds than tailwinds. Throughout his presidency, even with a strong economy for much of the time, he’s struggled to build confidence and his approval level has almost never been above 50%. Today, with a deep recession and a pandemic, patience with his approach is wearing thinner.

Trump has battled with everyone other than the most loyal Republican partisans and as a result has failed to broaden his constituency, while motivating many to work to replace him. Looking at these patterns of opinion, GOP strategists may have concluded that their most plausible path to re-election is not by converting independents or swing voters but finding ways to suppress turnout and/or disqualify voters who want change.”

According to David Coletto: “With an approval rating below 40%, Donald Trump’s re-election chances appear to be quite challenging, 5-months out from Election Day. Democratic nominee Joe Biden has a solid lead among registered and likely voters, is competitive among White voters, leads big in swing states Trump won in 2016, and appears to be benefiting from a motivated electorate that is building towards another blue-wave election like in the 2018 mid-terms.”

The survey was conducted with 1,500 American adults from June 11 to 13, 2020. A random sample of panelists was invited to complete the survey from a set of partner panels based on the Lucid exchange platform. These partners are typically double opt-in survey panels, blended to manage out potential skews in the data from a single source.

The data were weighted according to census data to ensure that the sample matched the United States’ population according to age, gender, race, educational attainment, and region. Totals may not add up to 100 due to rounding.