Here’s what the survey found:

If an election were held now, the Liberals would win 36% of the vote, the Conservatives 29%, the NDP 17%, the Green Party 7% and the BQ at 30% in Quebec. The Liberals are down 3, while the other parties are all within the margin from our previous few polls. 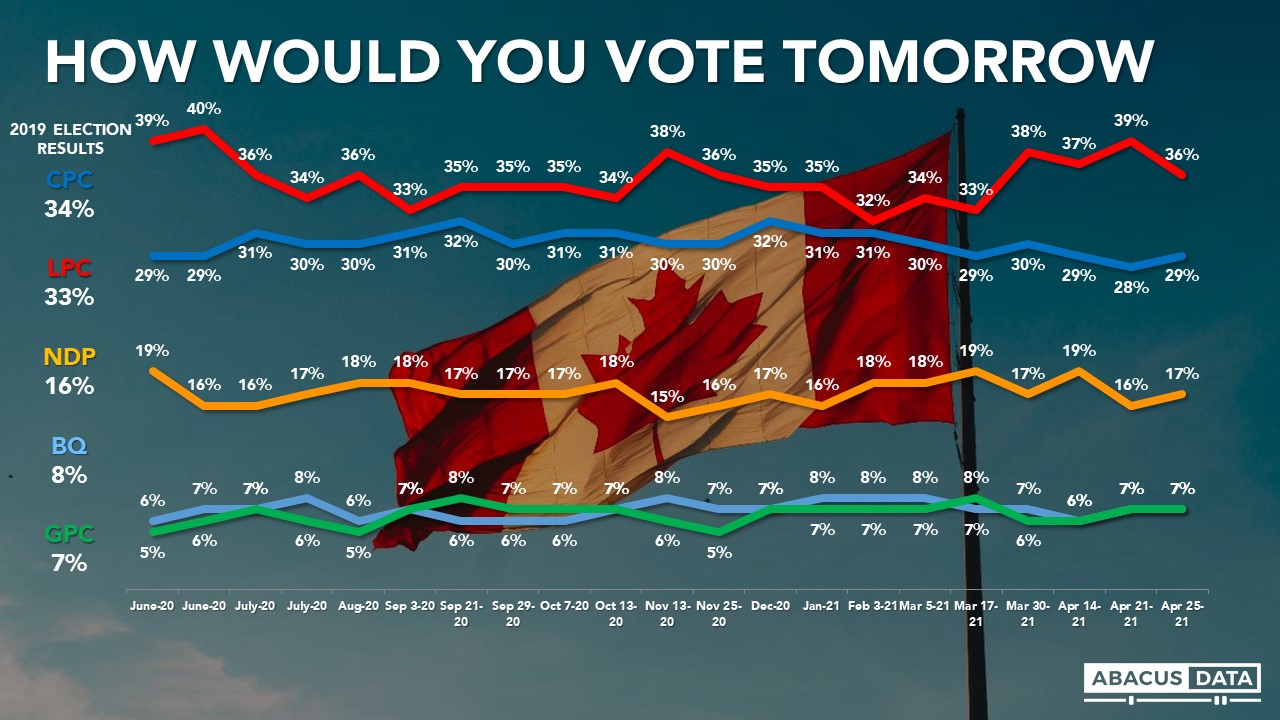 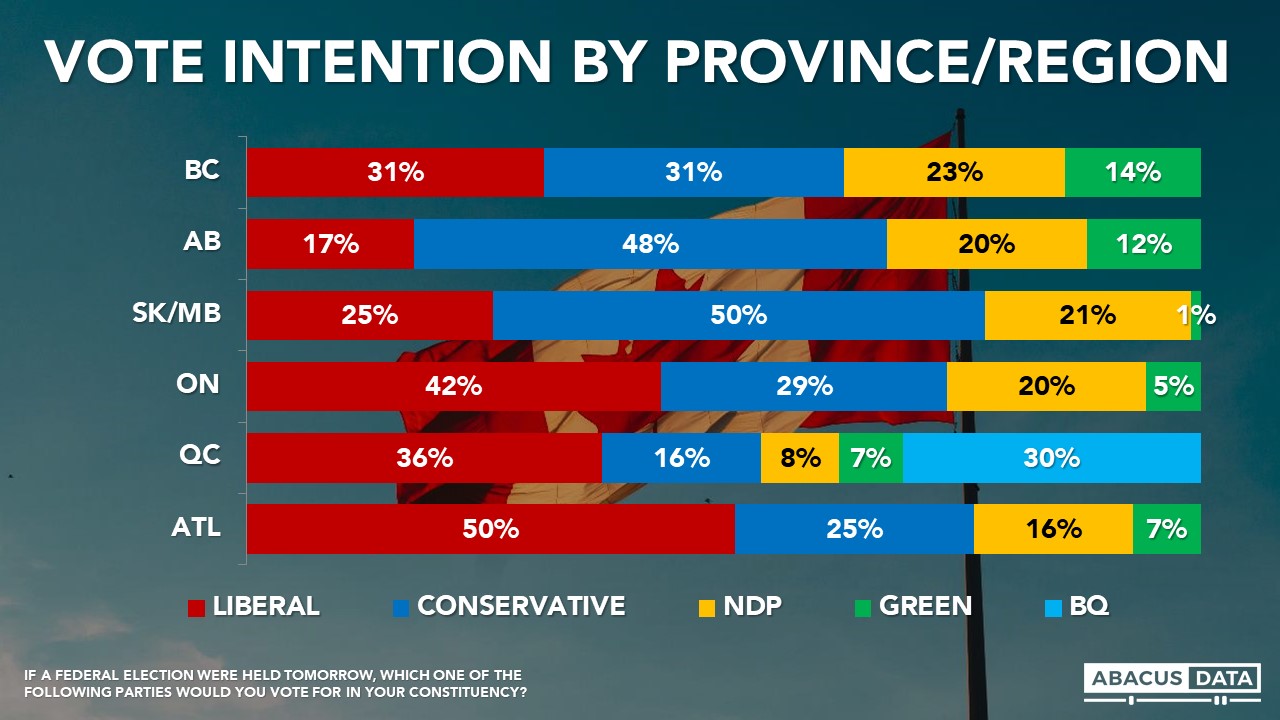 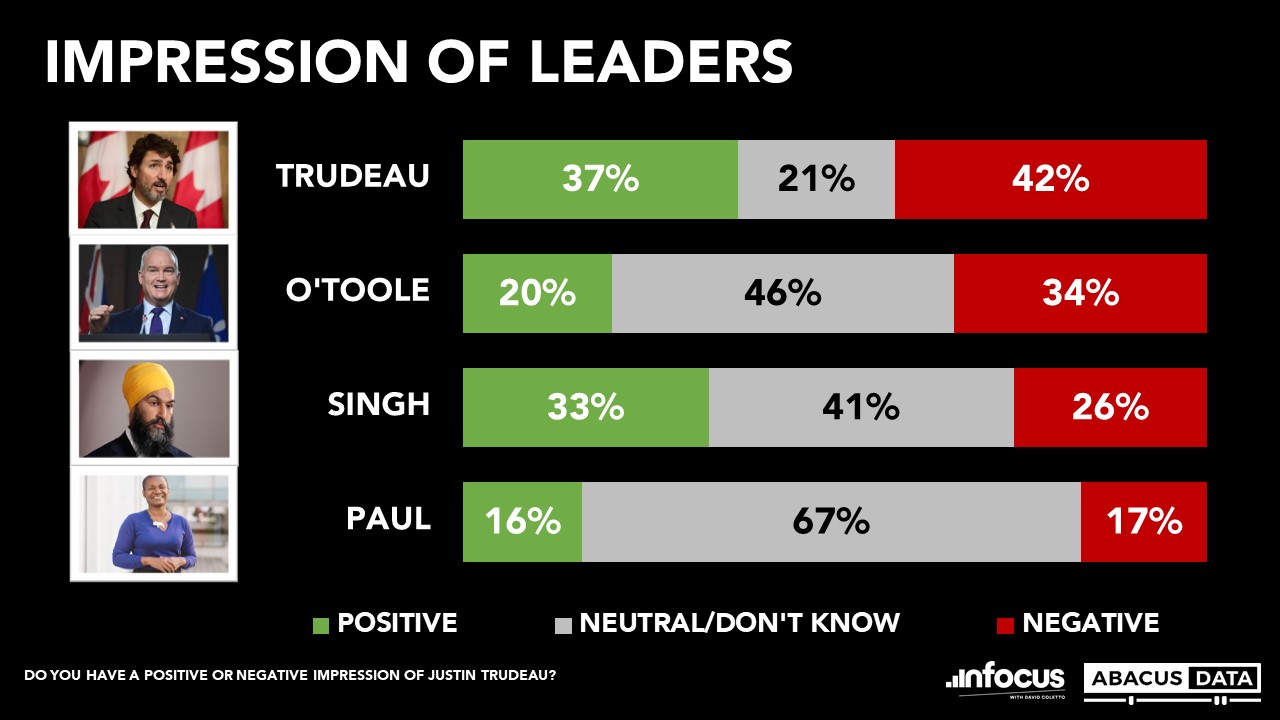 Yves Francois Blanchet, enjoys a +10 net rating in Quebec, which compares to a +5 for Justin Trudeau, -17 for Erin O’Toole, and -3 for Jagmeet Singh and +1 Annamie Paul. 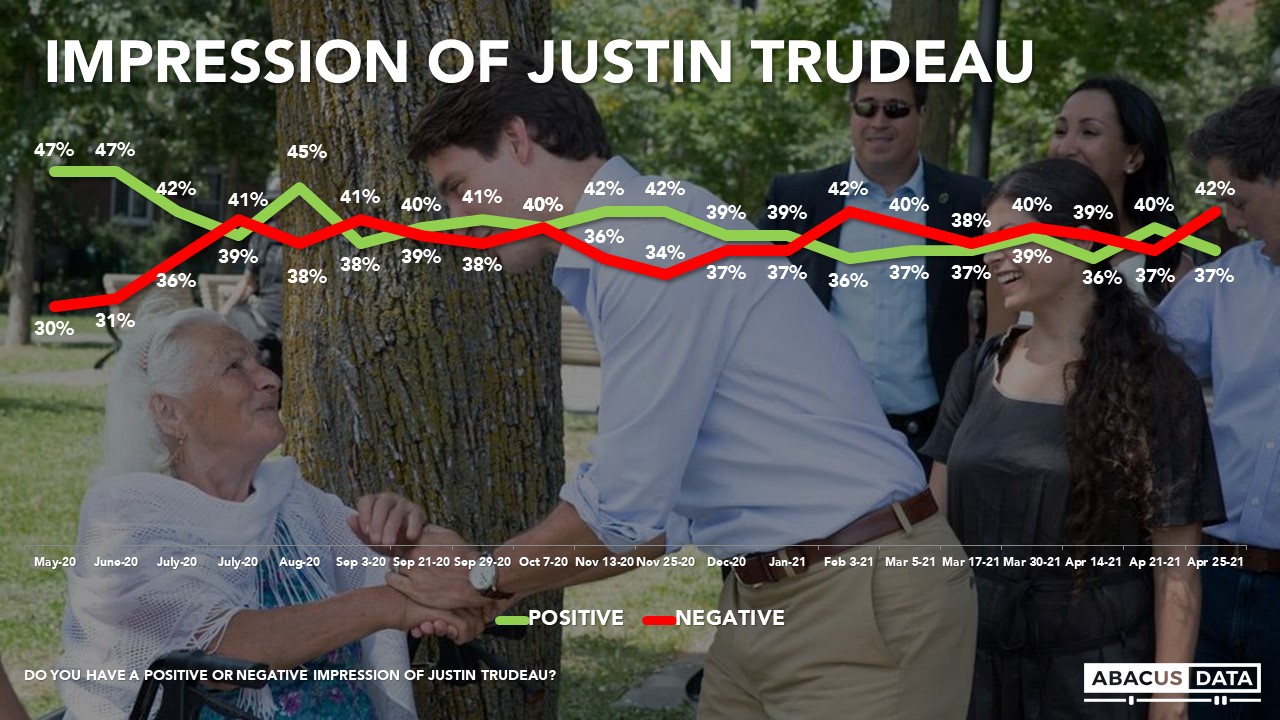 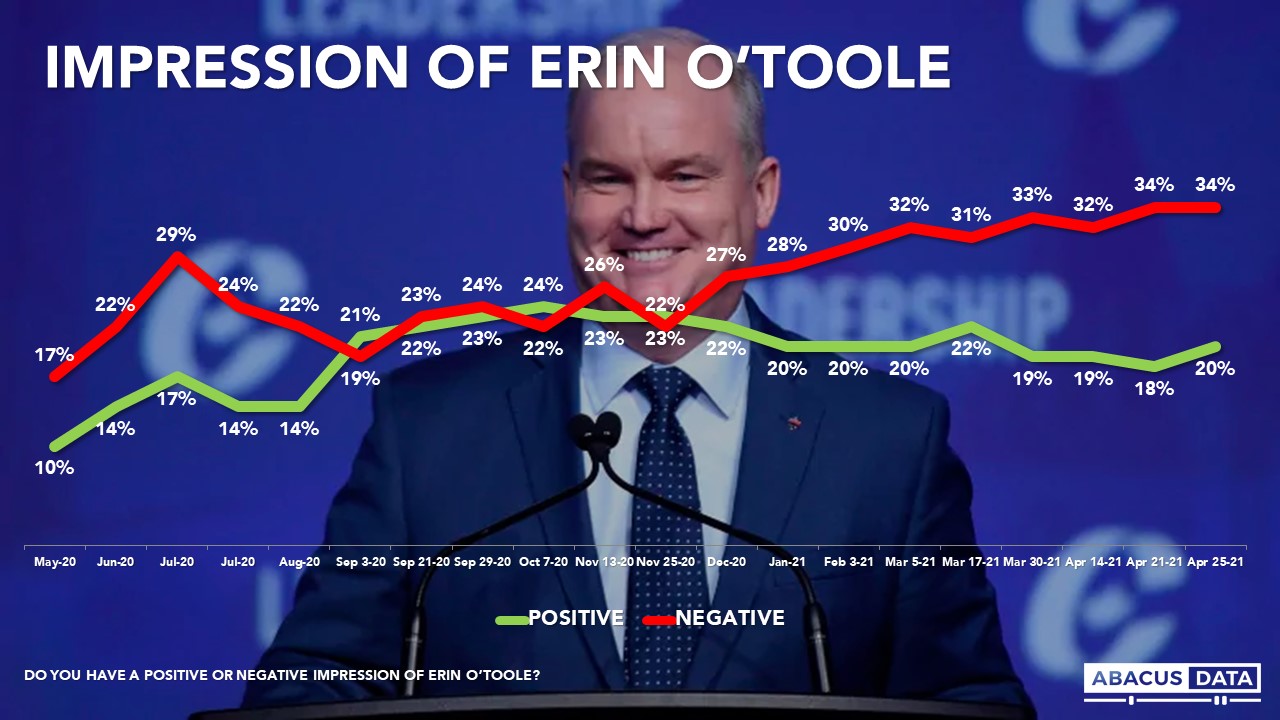 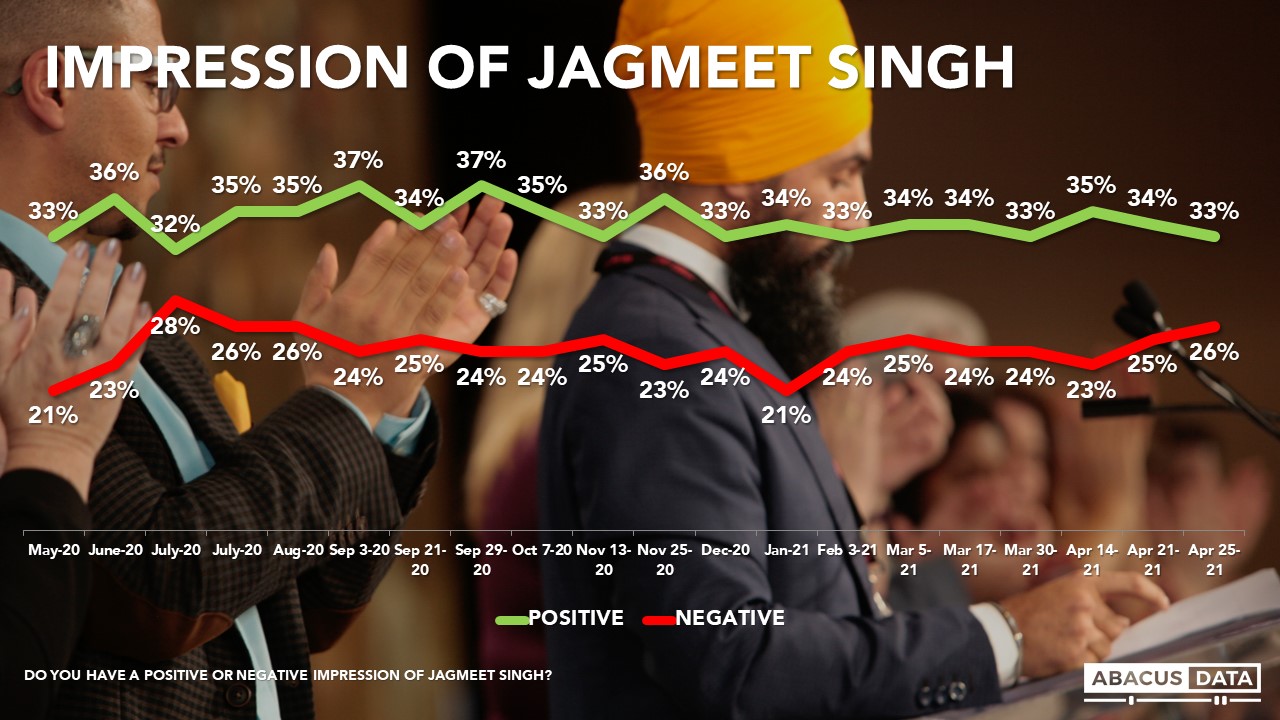 Asked which of the national party leaders they would prefer to see as Prime Minister, 31% picked Justin Trudeau, with Erin O’Toole (18%) and Jagmeet Singh (17%) following. 3% picked Ms. Paul and the same number preferred Maxime Bernier. 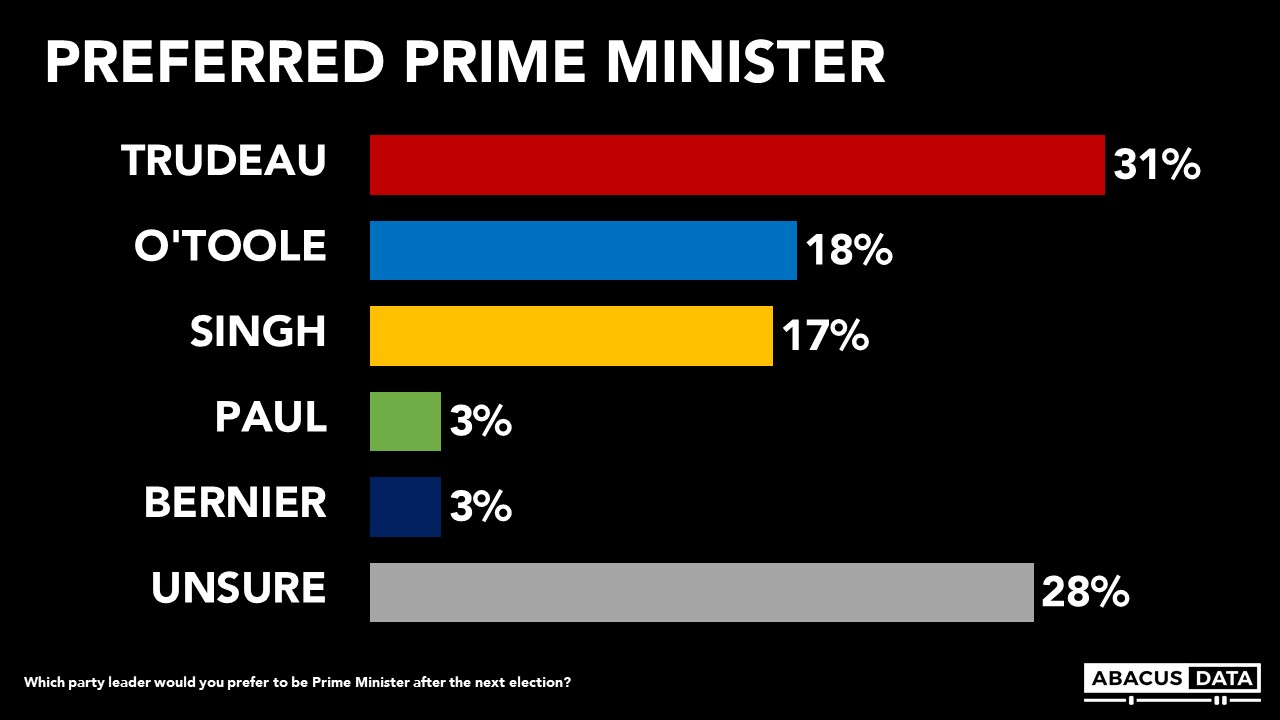 If forced to choose between Trudeau and O’Toole, most would choose Trudeau (60%) over O’Toole (40%). Perhaps most noteworthy is that Trudeau would be the preference of 62% of BQ voters, 55% of Green Party voters, 76% of NDP voters, and 64% of the undecided. 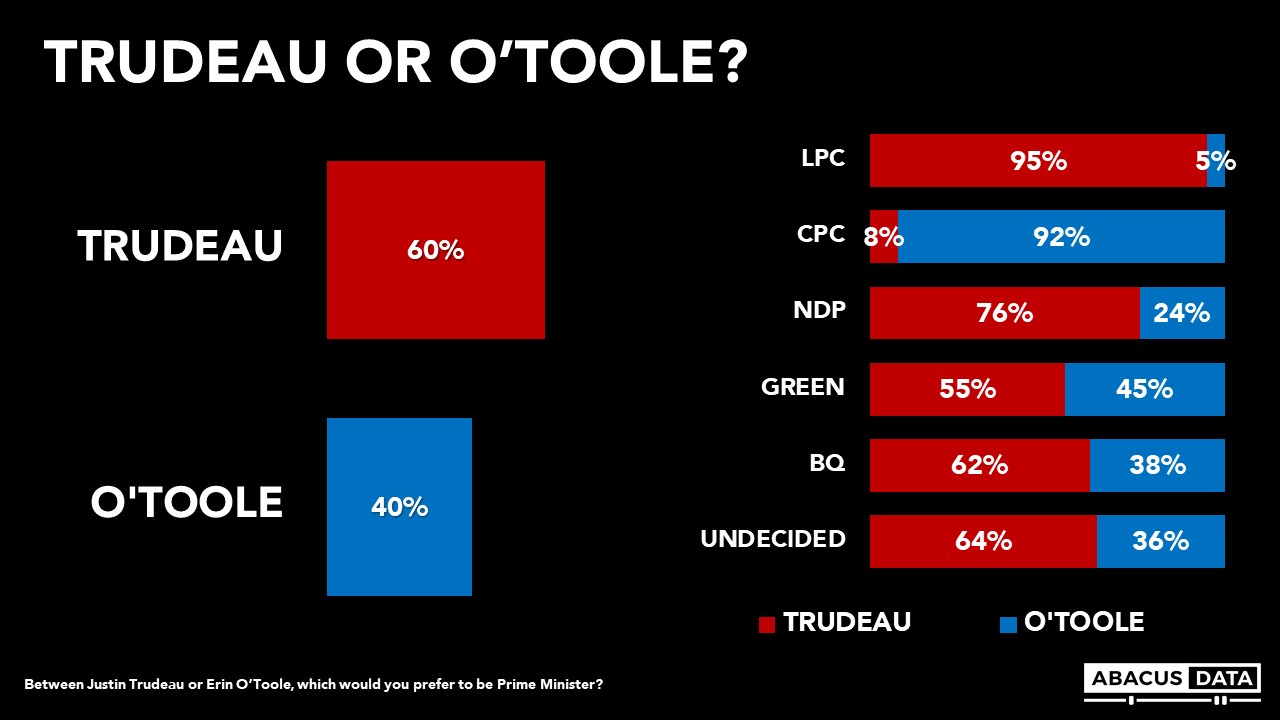 Today, 41% approve of the performance of the federal government, and 42% disapprove. There has been no clear trend on this indicator for several months. 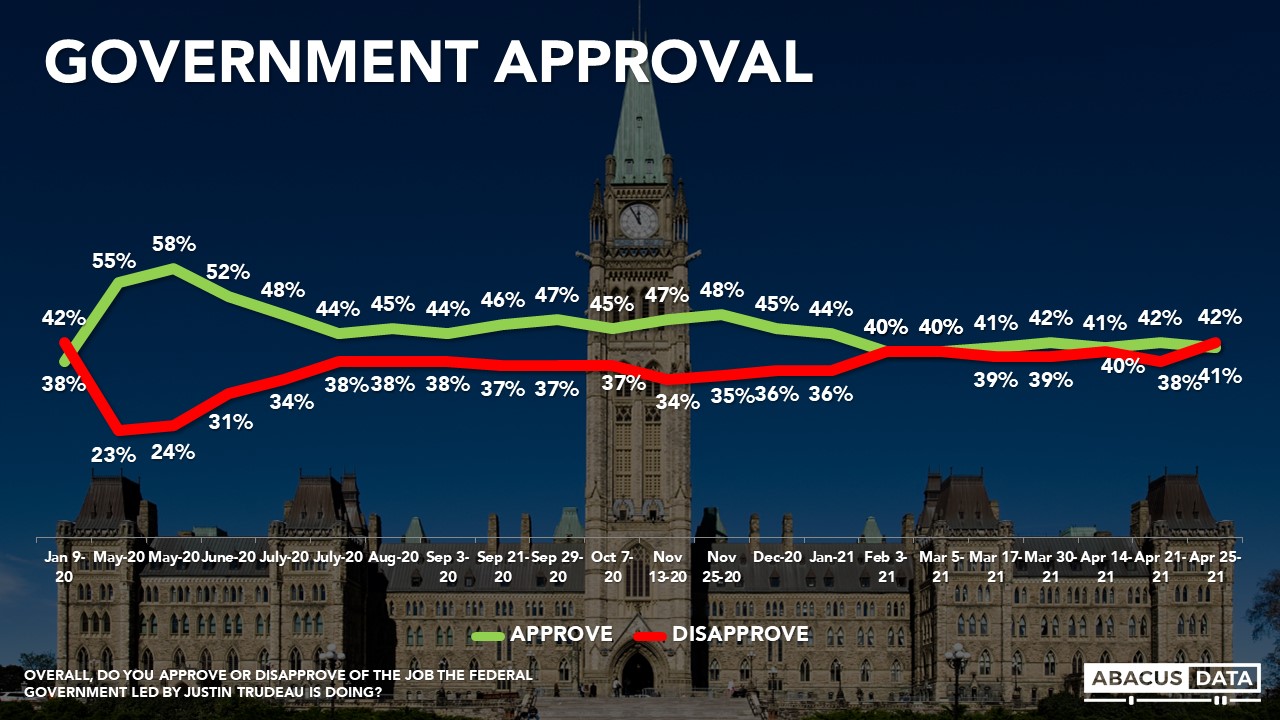 Today, 39% of voters say it’s definitely time for a change in government. Another 27% say “it would be good to have change but doesn’t matter to me that much”. This total of 66% who would prefer to see a change is 3 points less than at the time of the last election, and the intensity of the desire for change is 12 points less.

In total, 34% say they prefer the Liberals to be re-elected, 3-points higher than at the end of the 2019 election campaign. 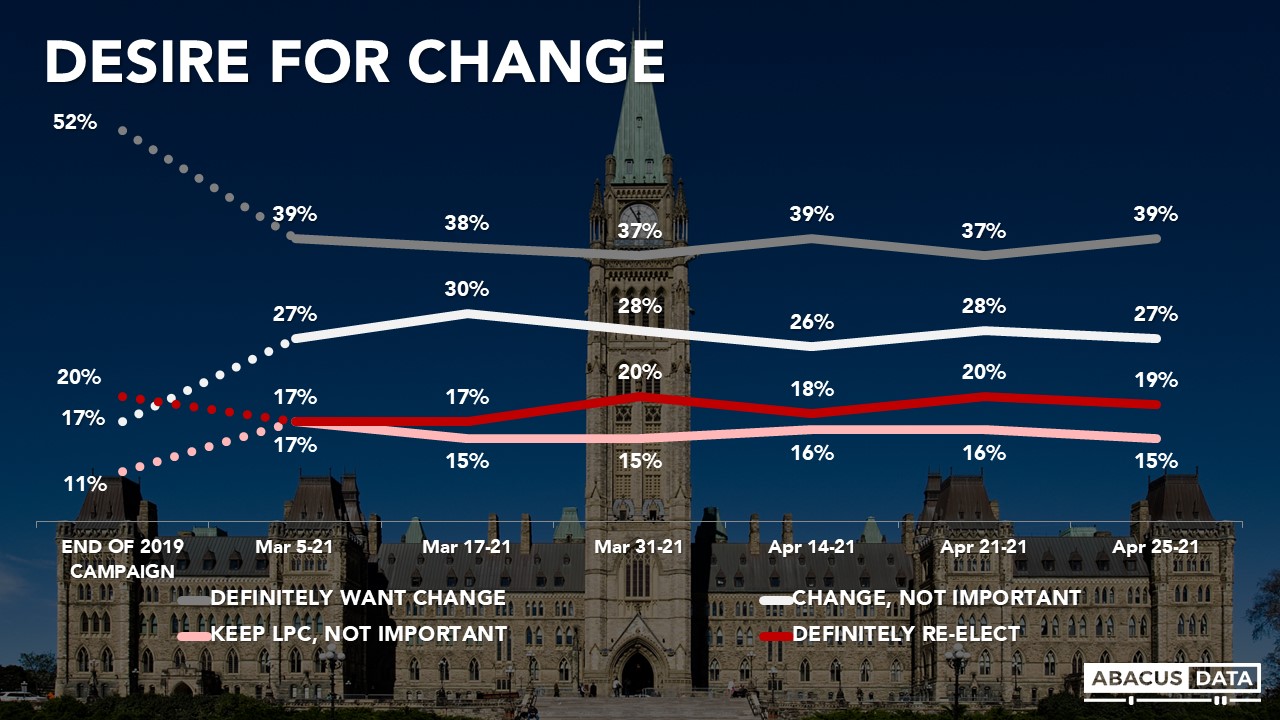 Among the 39% who are “hard change” voters, 20% would prefer Trudeau and 80% O’Toole, reflecting the fact that a notable minority of these voters are more progressive than conservative in their orientation.

According to Bruce Anderson: “As long as the pandemic is with us, politics will not be a preoccupation for most people. The Liberals and Conservatives have both launched policy initiatives but in neither case do these seem to have materially affected the mood of the country. As things currently stand, the Liberals have a decided advantage politically, which isn’t the same as unshakeable, enthusiastic support, but should be viewed as more tentative and subject to change. The message for Conservative leader O’Toole in these numbers continues to be: look for ways to better connect with the mood of worried and hopeful voters without sounding like you are preoccupied with gaining political advantage over your opponents, or prosecuting issues the public sees as marginal given the importance of the pandemic.”

According to David Coletto: “Post-budget, we don’t see much movement in any of the key political tracking questions. The Liberals continue to hold a sizeable lead over the Conservatives built on strength in BC, Ontario, Quebec, and Atlantic Canada.”

Interested in an exclusive polling brief on the road to the 2021 federal election? Find out more

The survey was conducted with 2,201 Canadian adults from April 20 to 25, 2021. A random sample of panelists were invited to complete the survey from a set of partner panels based on the Lucid exchange platform. These partners are typically double opt-in survey panels, blended to manage out potential skews in the data from a single source. 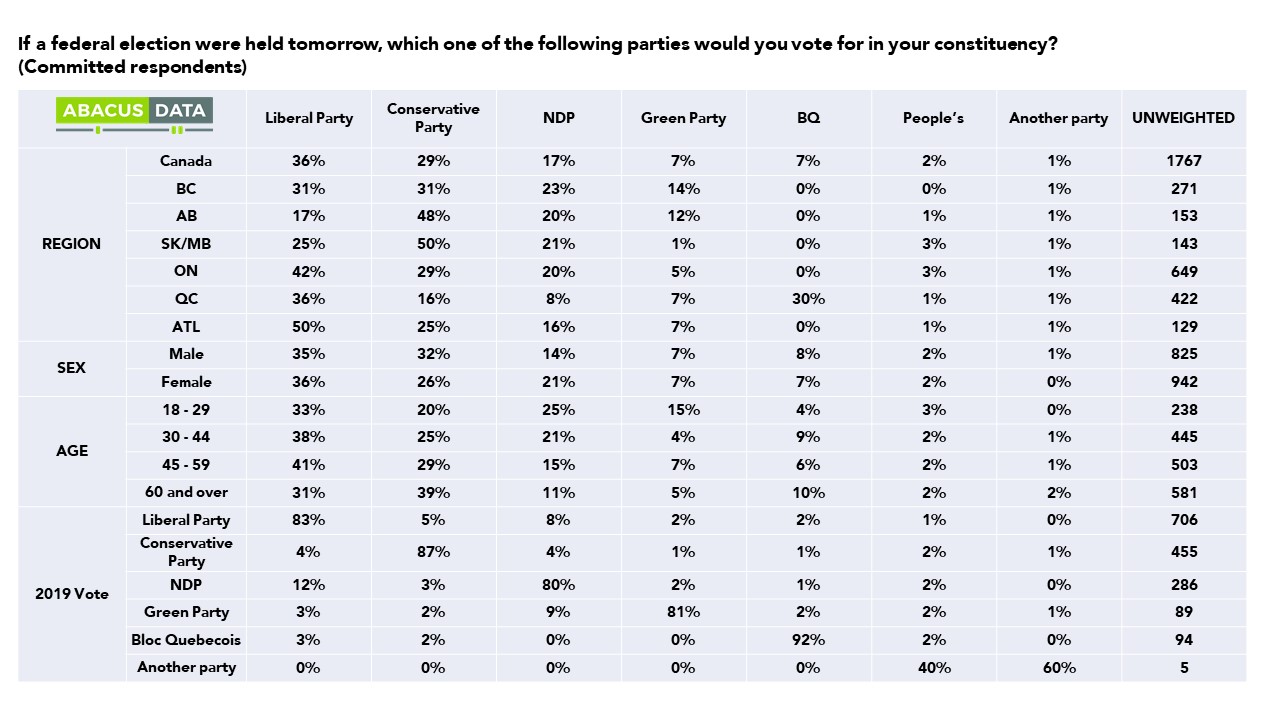 The return to normal travel is delayed, but not cancelled.
2.4 million are vaccine “maybes”, another 2.4 million say “no”. More than 5 million doubt the second...
How Canadians view the federal party leaders
Introducing Carson Miles - an Ottawa-based road cyclist being supported by Abacus Data
2021 is not 2019: Liberals well ahead as Conservative vote hits a new low