LIBERALS HAVE AN 8-POINT LEAD NATIONALLY

If an election were held at the time of the survey, the Liberals would win 39%, the Conservatives 31% and followed by the NDP at 16%, the Greens at 6%, and the BQ at 7%. At the beginning of March, the Liberals and Conservatives were within a point of each other. 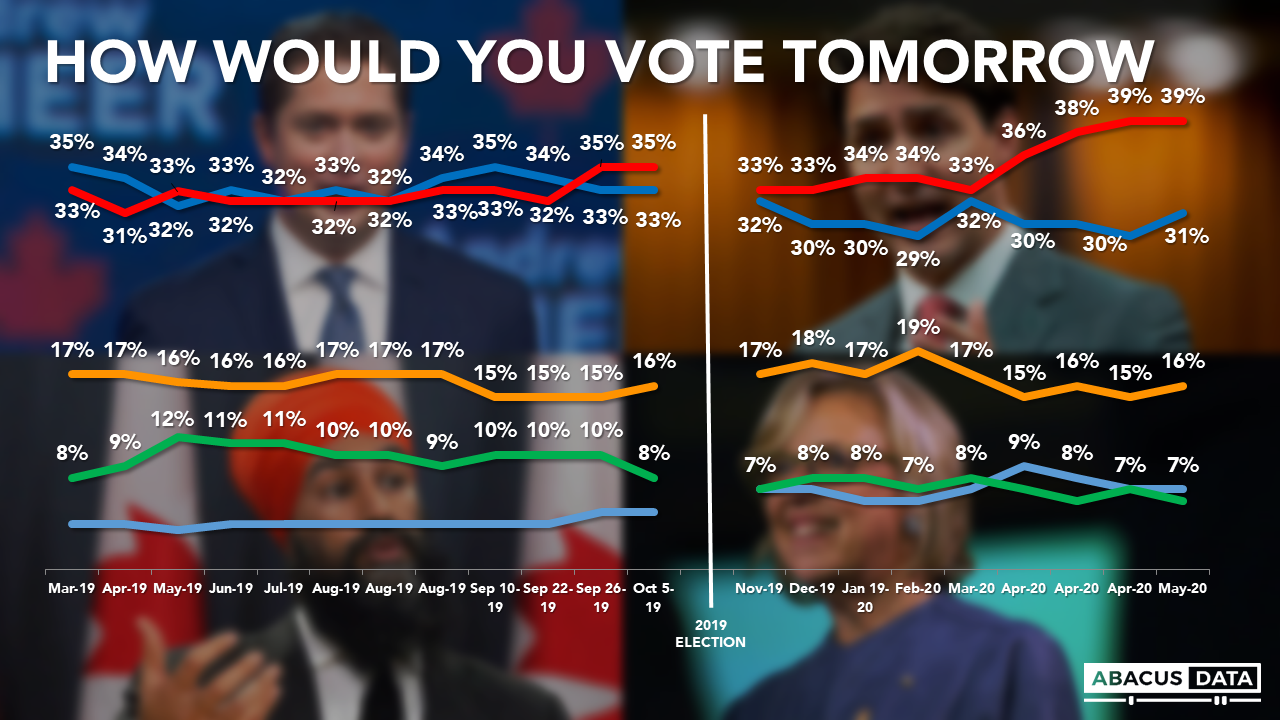 In Alberta and Saskatchewan, the Conservatives have a massive 31-point lead over the Liberals.
In the rest of the country, the Liberals have opened up a 15-point lead. Worth noting, in the run-up to last fall’s election the Liberal lead outside AB/SK was at least 5 points more narrow. Also, compared to a year ago, support for the Green Party is only about half of what it was then. 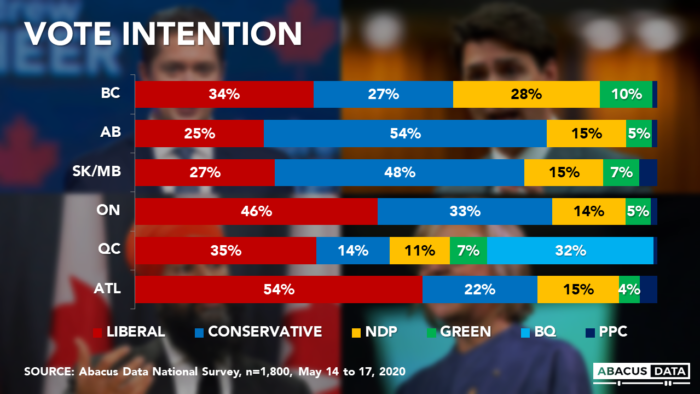 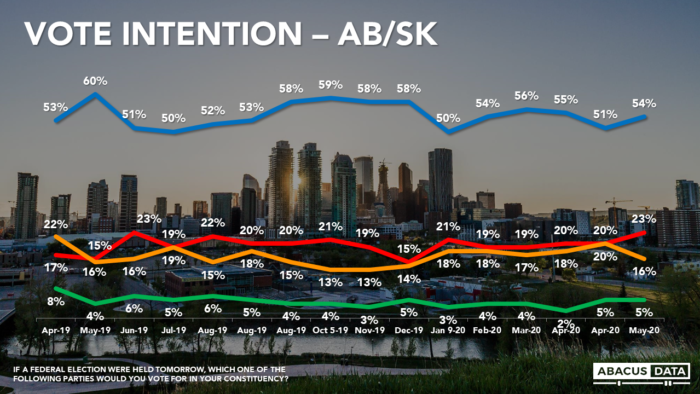 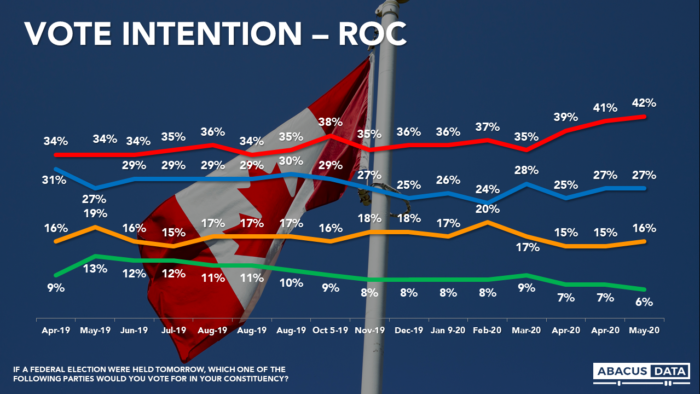 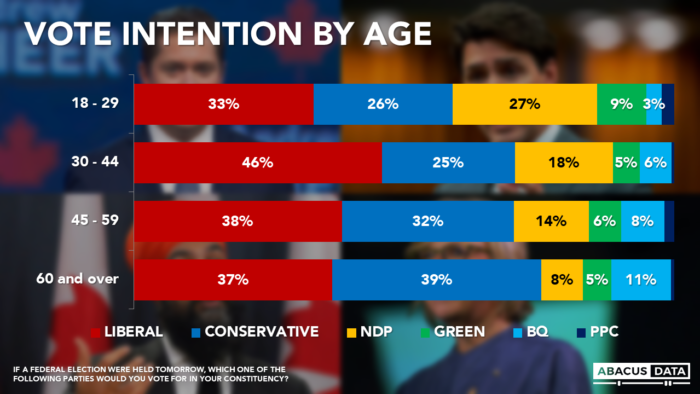 FEDERAL GOVERNMENT APPROVAL IS UP 20 POINTS IN TWO MONTHS 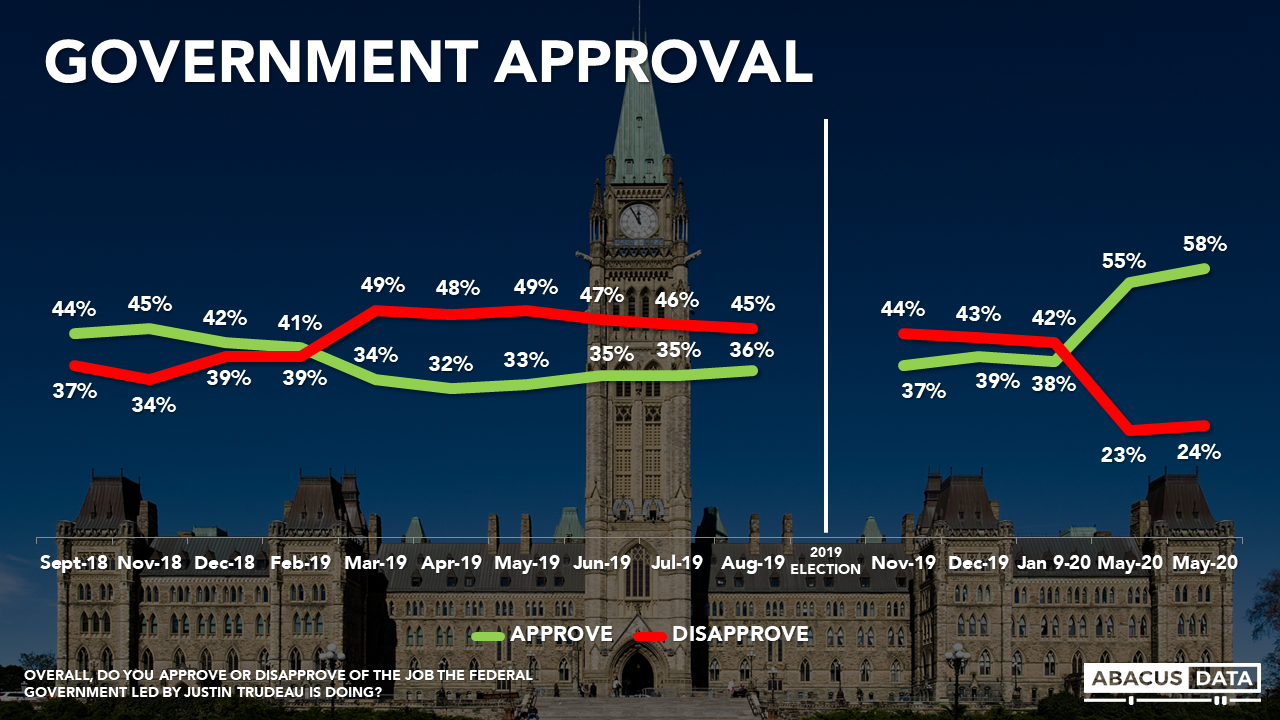 FEELINGS ABOUT PM TRUDEAU IMPROVE 11 POINTS OVER THE SPRING.

Personal approval of Mr. Trudeau is 47% positive, up from 32% in March. Trudeau’s negatives are 31%.

Conservative Leader Andrew Scheer has 17% positive opinion and 47% negative. Worth noting is that even in Alberta, where the Conservatives swept every seat, Mr. Scheer’s positives are 27% and his negatives 40%. Among those who voted Conservative last fall, only 45% indicate a positive view of the Opposition Leader today. 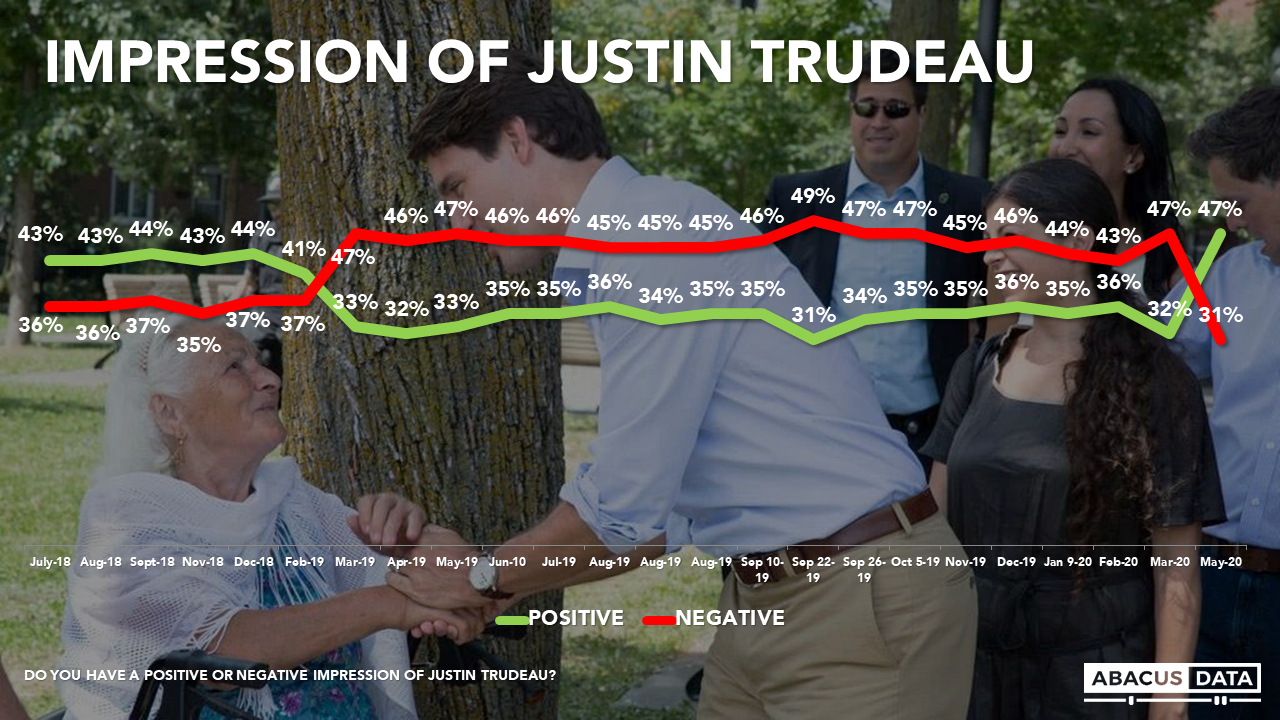 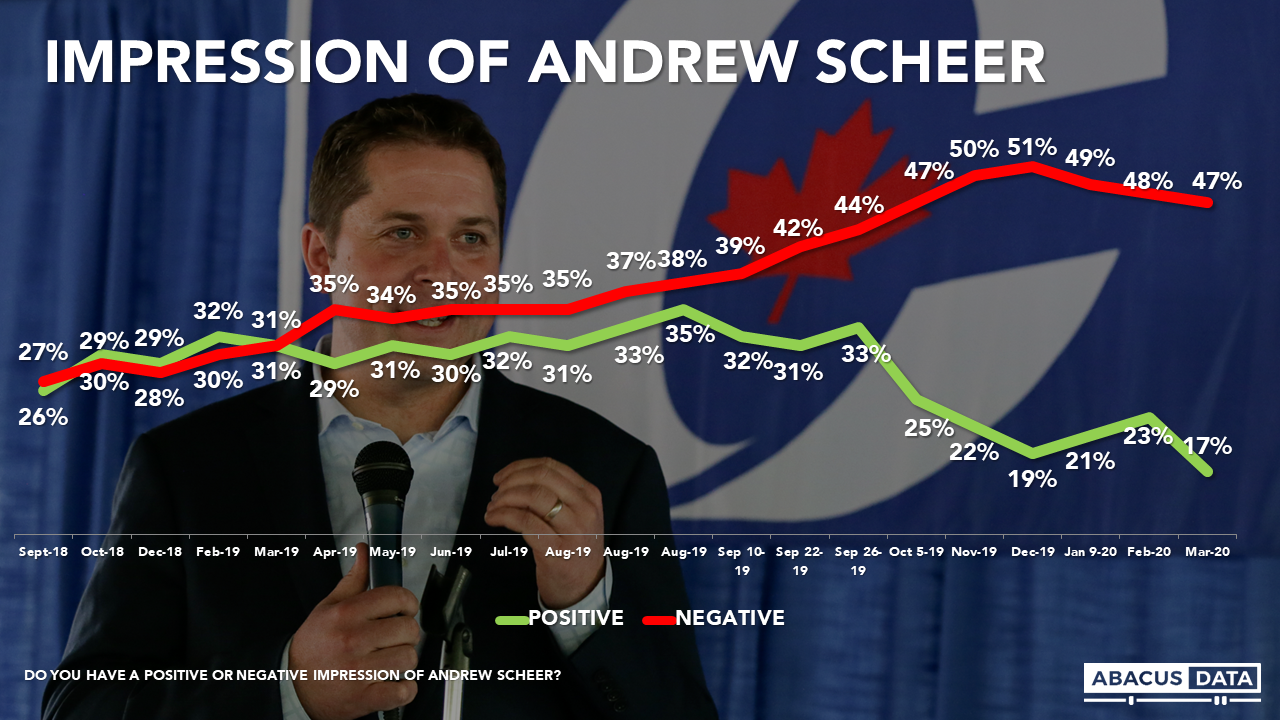 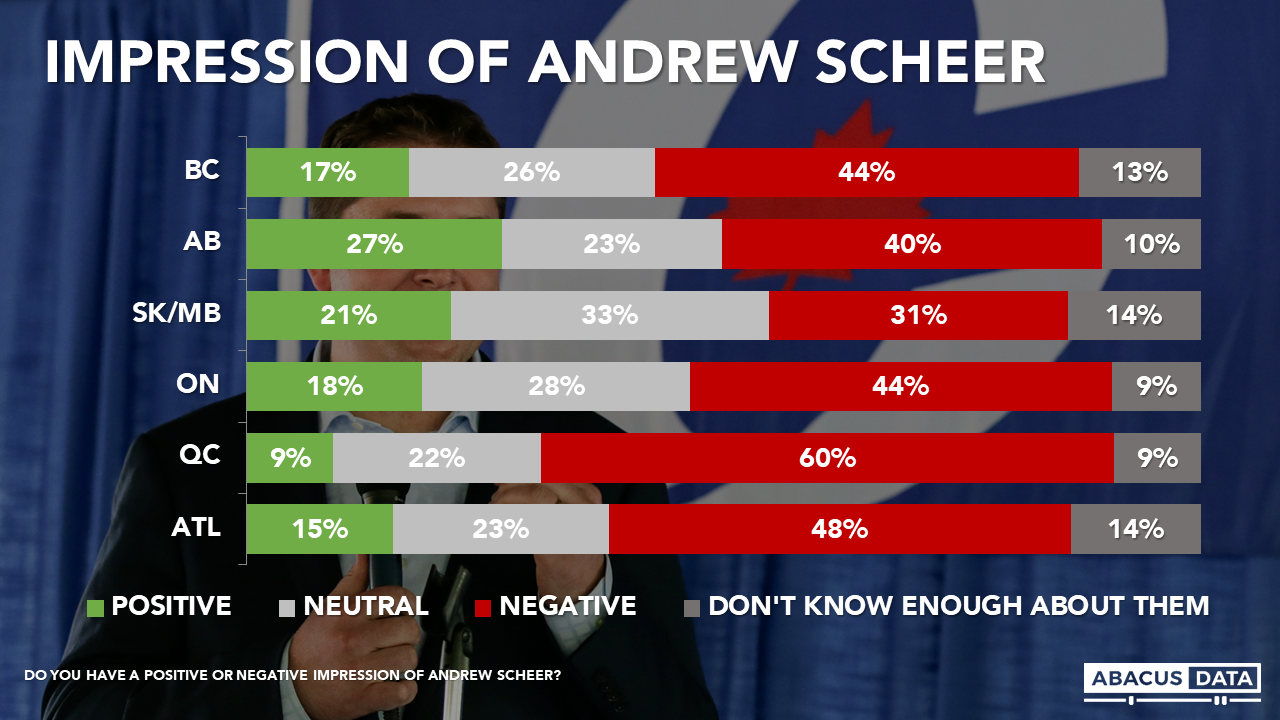 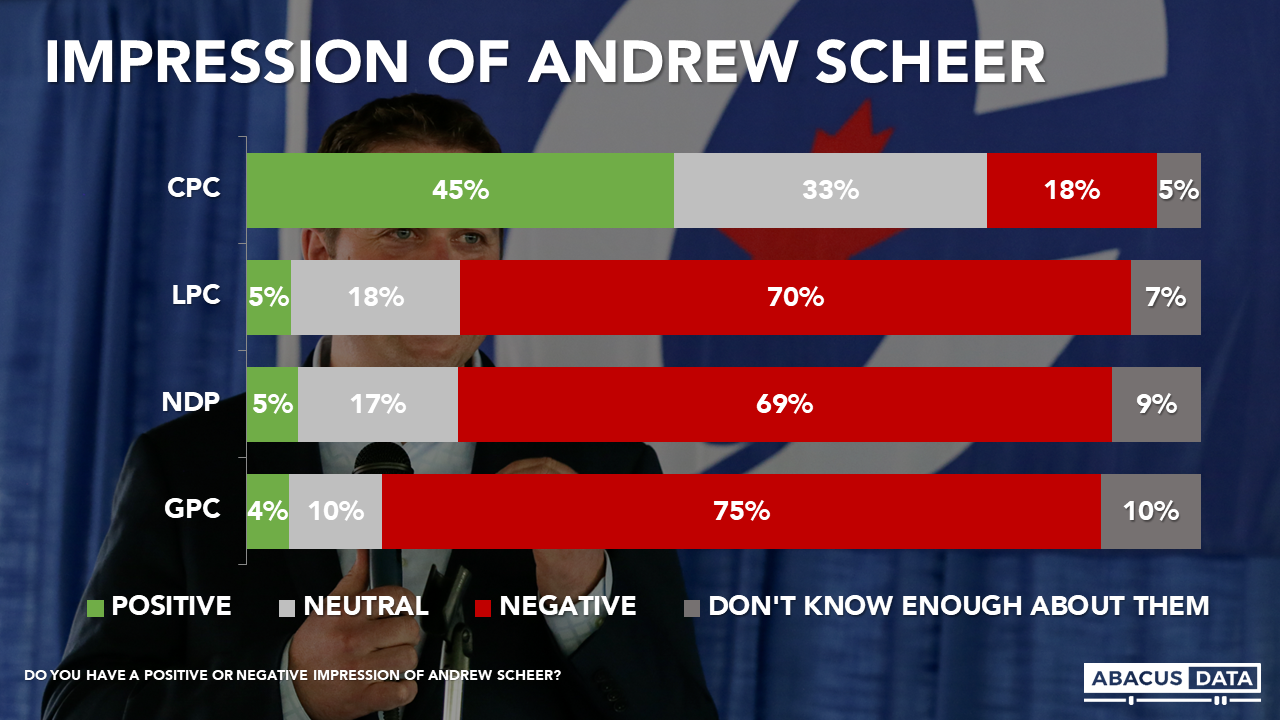 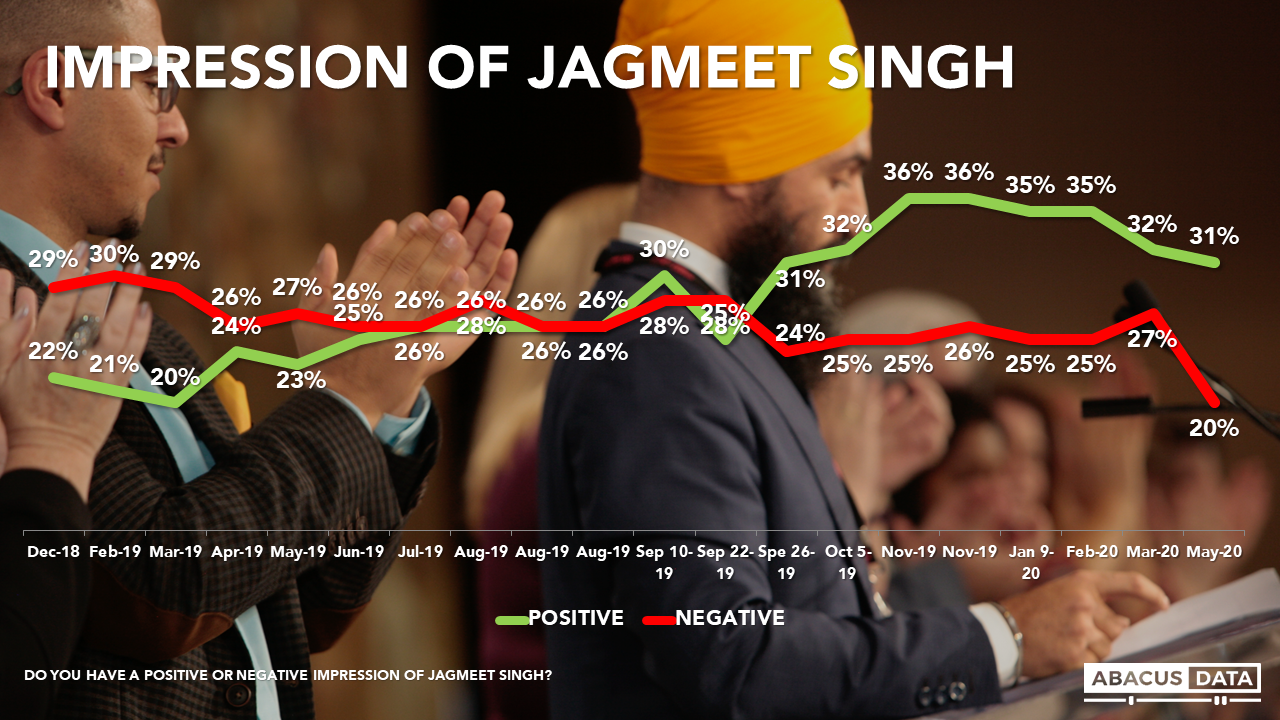 We measured views of both front runners in the Conservative leadership race. For Peter MacKay, 15% of Canadians report a positive view, 24% negative and the rest are neutral or have no opinion. For Erin O’Toole, 10% report positive, and 17% negative views. 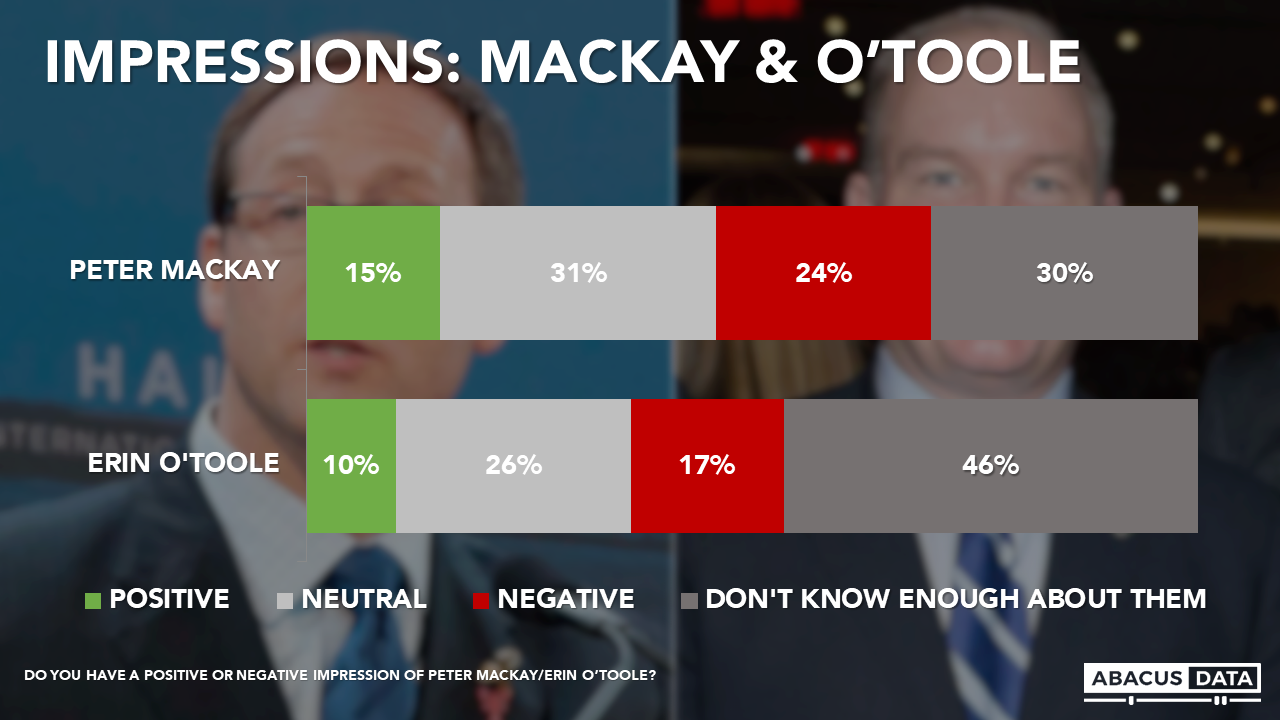 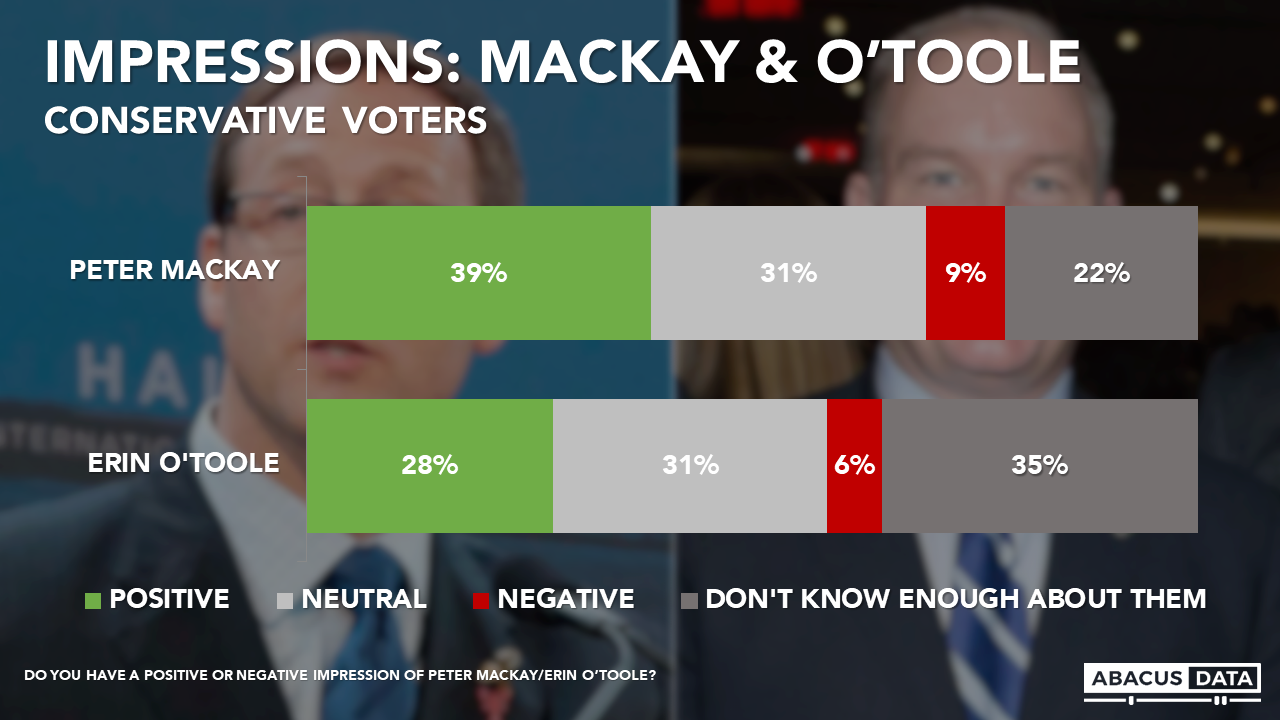 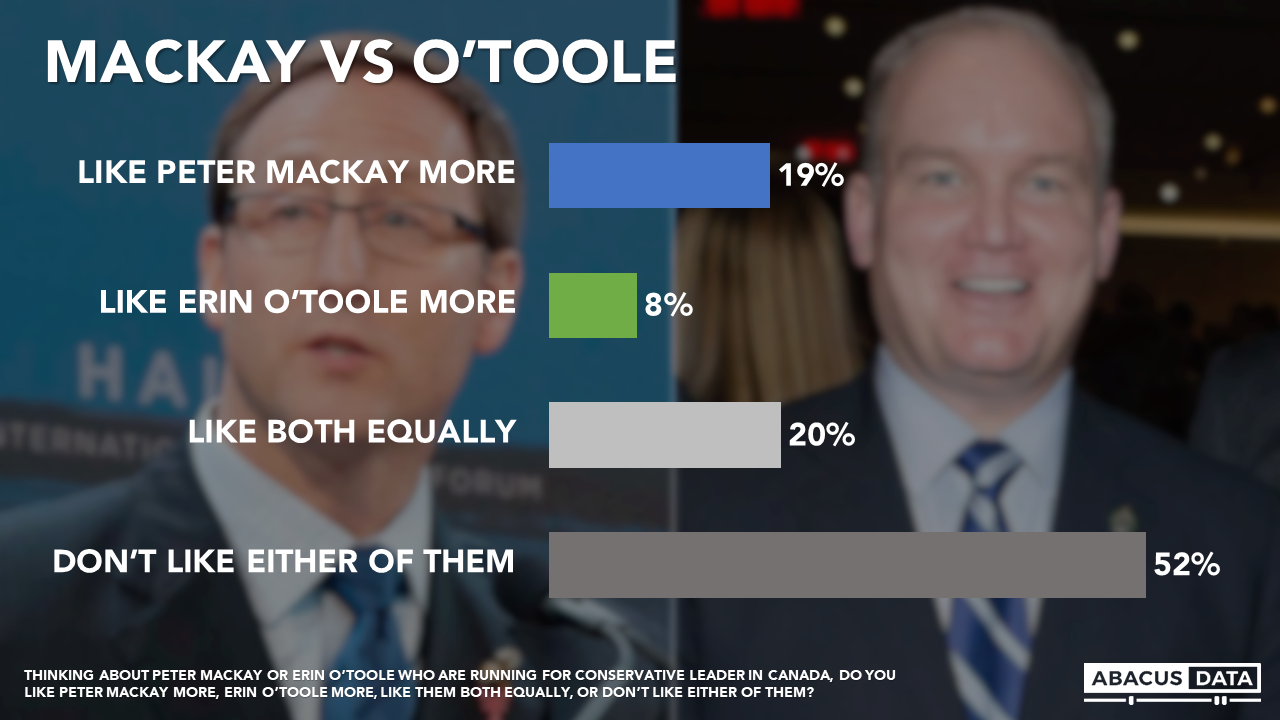 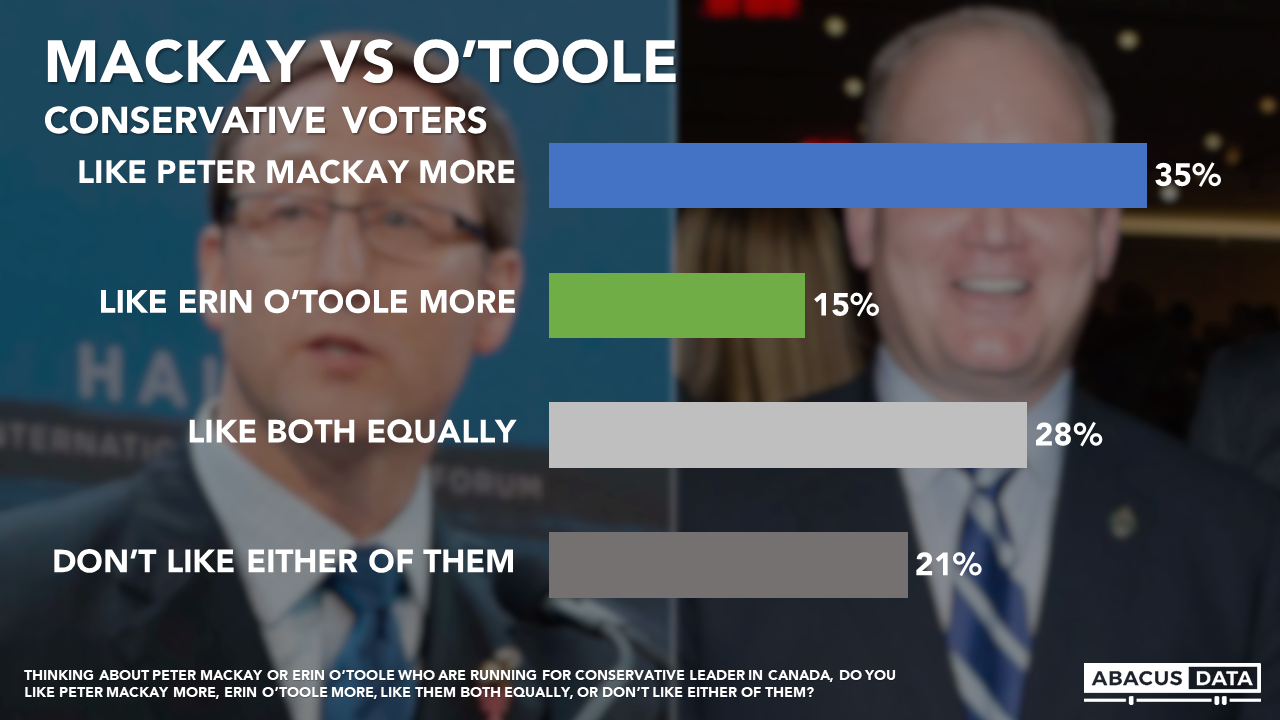 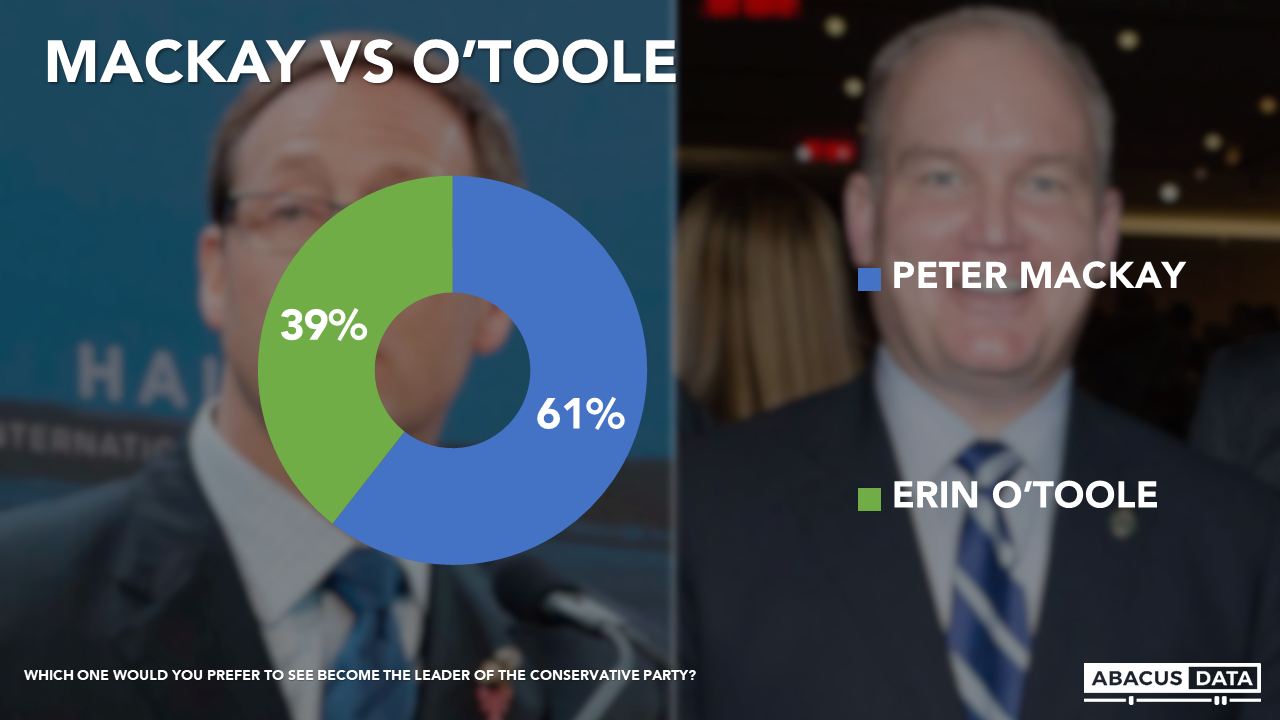 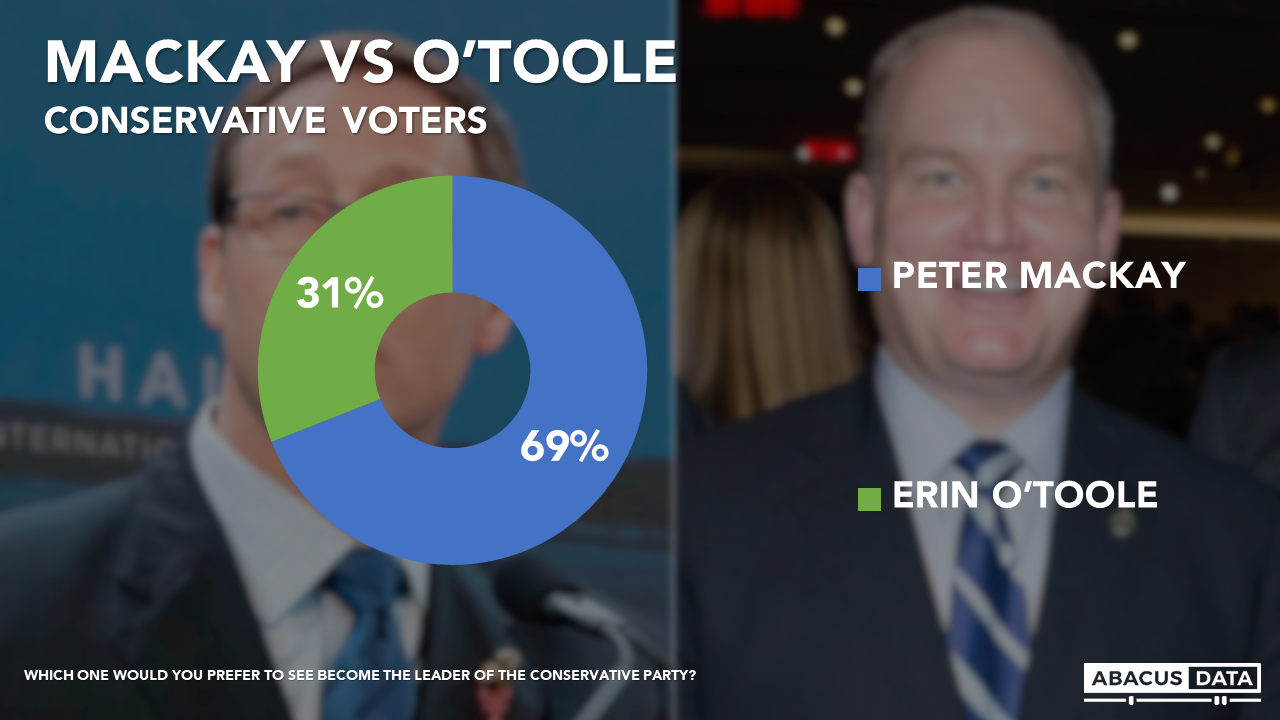 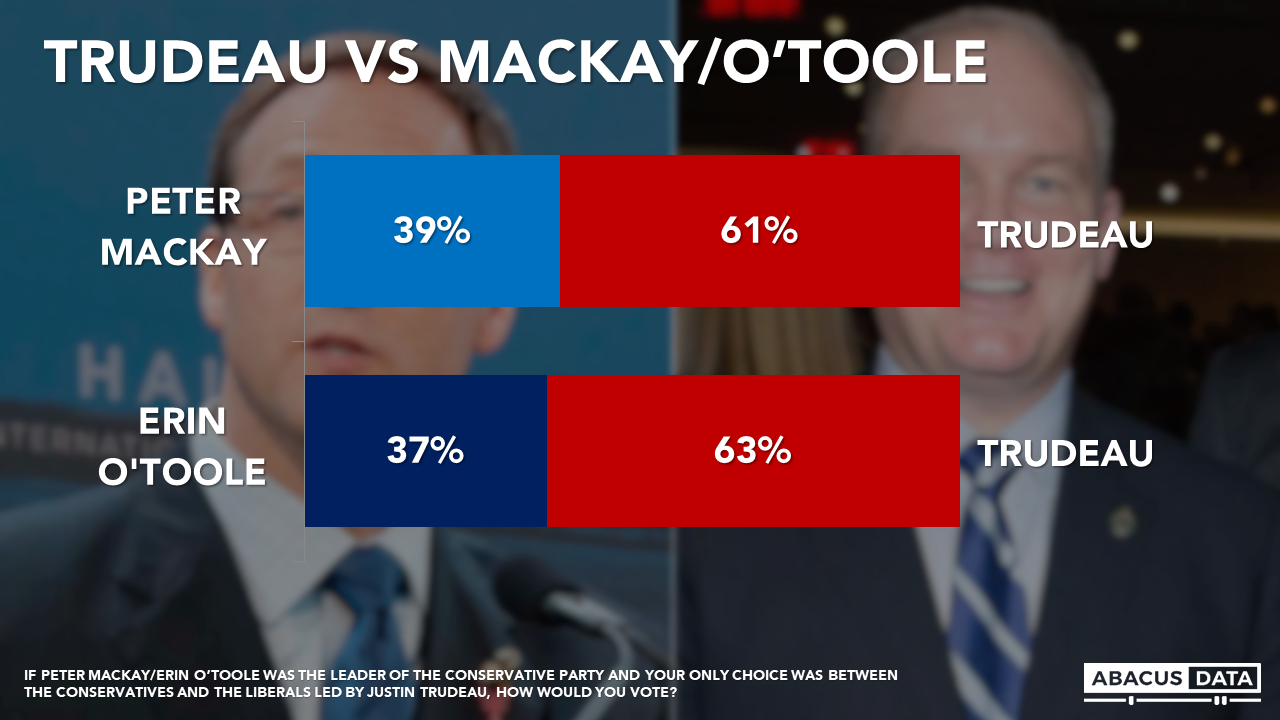 Very few voters want to see an election in the next year. Only 16% say they would like to see one this fall, including 25% in Alberta and 34% among Conservatives. About one in five (19% favour an election next spring, 31% say sometime in the next two years and 33% at the end of a four-year term. 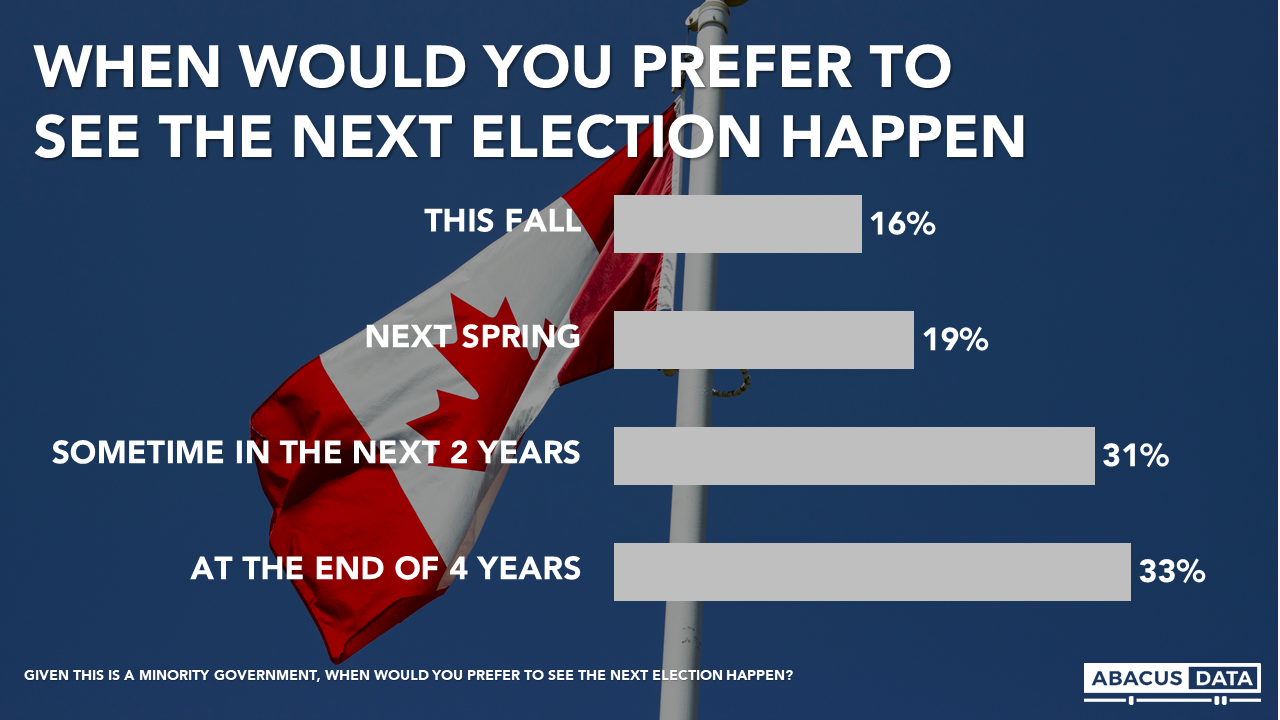 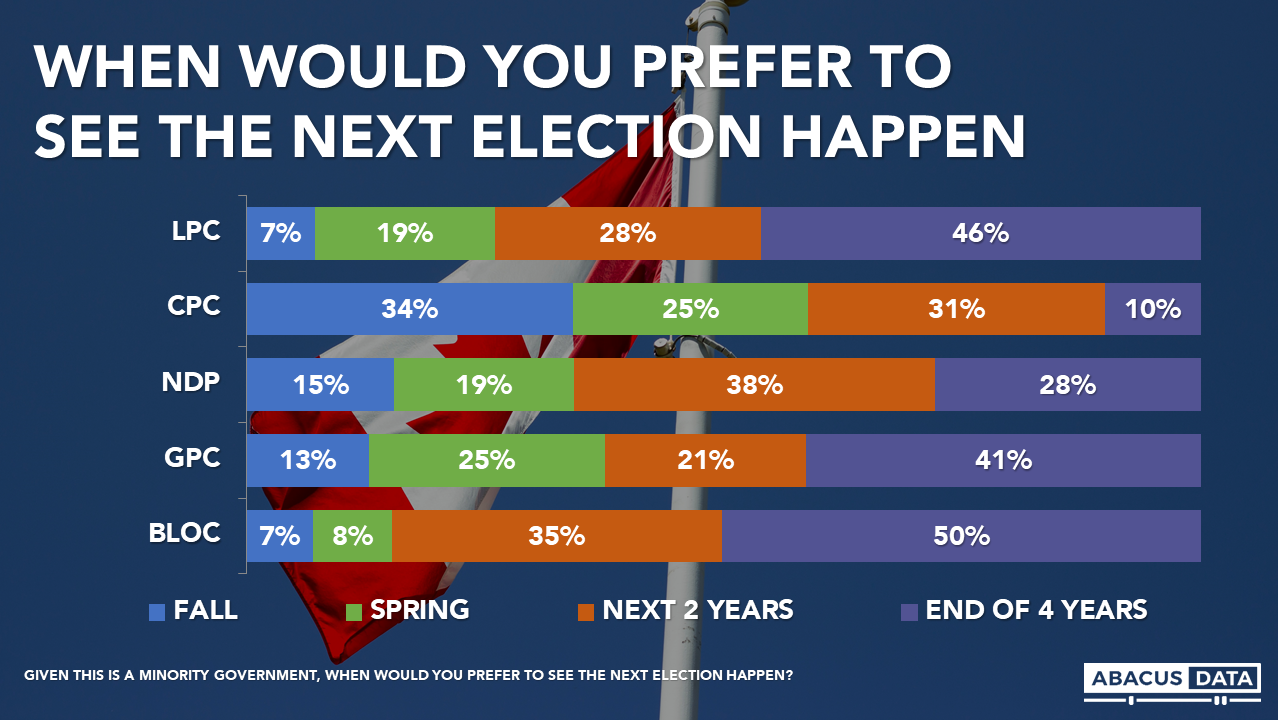 According to Bruce Anderson: “Canadians are not interested in partisan politics right now, they are worried about health and the economy. They want governments to help, and they want governments to succeed. They are adjusting their expectations of government and setting aside some of their frustrations as priorities have shifted.

While Justin Trudeau is recalibrating his government’s agenda, Canadians are showing a positive reaction to his leadership. However the reset has not been successfully managed by Andrew Scheer – perhaps the only expectations of him were to set aside partisanship but he seems to have left many in his own party, and in the CPC stronghold of Alberta feeling uncomfortable with his posturing.

When it comes to the impending change in leadership, the results show that the neither Peter MacKay nor Erin O’Toole are very well known today, and whichever wins, has a chance to develop their image among Canadians as a result.”

According to David Coletto: “In the early months of 2020, approval of the Liberal government looked very much like it did for most of 2019 – more negative than positive. But within two months, the public’s impression of both the Prime Minister and his government have shifted markedly positive. Today, the government’s approval rating is 58%, something we haven’t seen since the days after its victory in 2015.

The Liberals would likely win a majority government with large leads in Ontario, Atlantic Canada, and BC and a solid performance in Quebec.

These shifts may not persist, but as with so much related to the pandemic, is has reset people’s impressions and perhaps the way governments and political leaders will be evaluated.”

David was on CBC’s Power and Politics discussing these numbers and more:

Our survey was conducted online with 1,800 Canadians aged 18 and over from May 14 to 17, 2020. A random sample of panellists was invited to complete the survey from a set of partner panels based on the Lucid exchange platform. These partners are double opt-in survey panels, blended to manage out potential skews in the data from a single source.

The margin of error for a comparable probability-based random sample of the same size is +/- 2.3%, 19 times out of 20. The data were weighted according to census data to ensure that the sample matched Canada’s population according to age, gender, educational attainment, and region. Totals may not add up to 100 due to rounding.