Our latest nationwide survey included a series of probes designed to help understand how the public sees the leaders of the three biggest national political parties.

Here’s what we found.

Today, Mr. Singh is arguably the most popular national political leader, with 38% saying they have a positive view of him, while 26% have a negative view. His image is significantly better among women, younger voters, British Columbians and those with post-secondary education. His standing is noticeably worse than his national average in Quebec and Alberta. Those planning on voting Liberal, Green, and NDP like him, while Conservatives and Bloc voters mostly don’t. 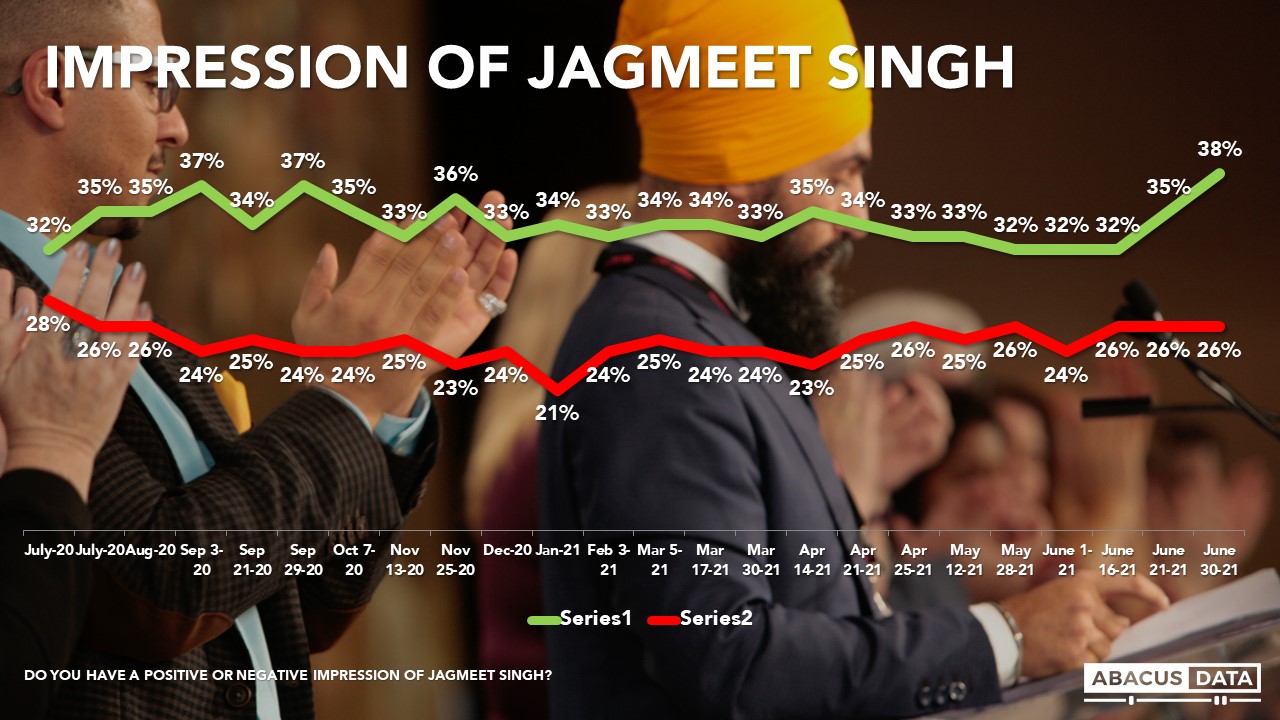 Among those who definitely think it’s time for a change in government, more don’t like what they see in Mr. Singh than like him (positive 33% vs. negative 36%). Among voters on the centre, 32% are positive, while 24% are negative. He’s strong in urban Canada and weaker in rural Canada.

Among those who say they will definitely vote 41% like him, while 27% don’t. 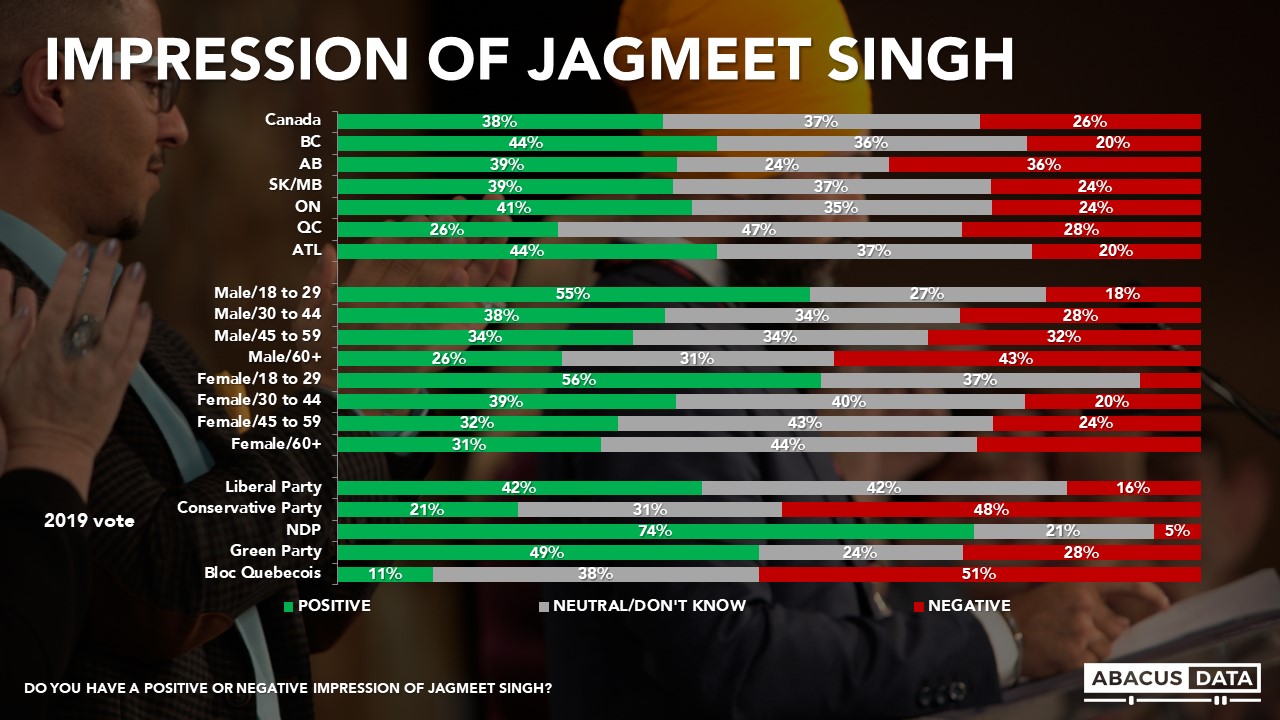 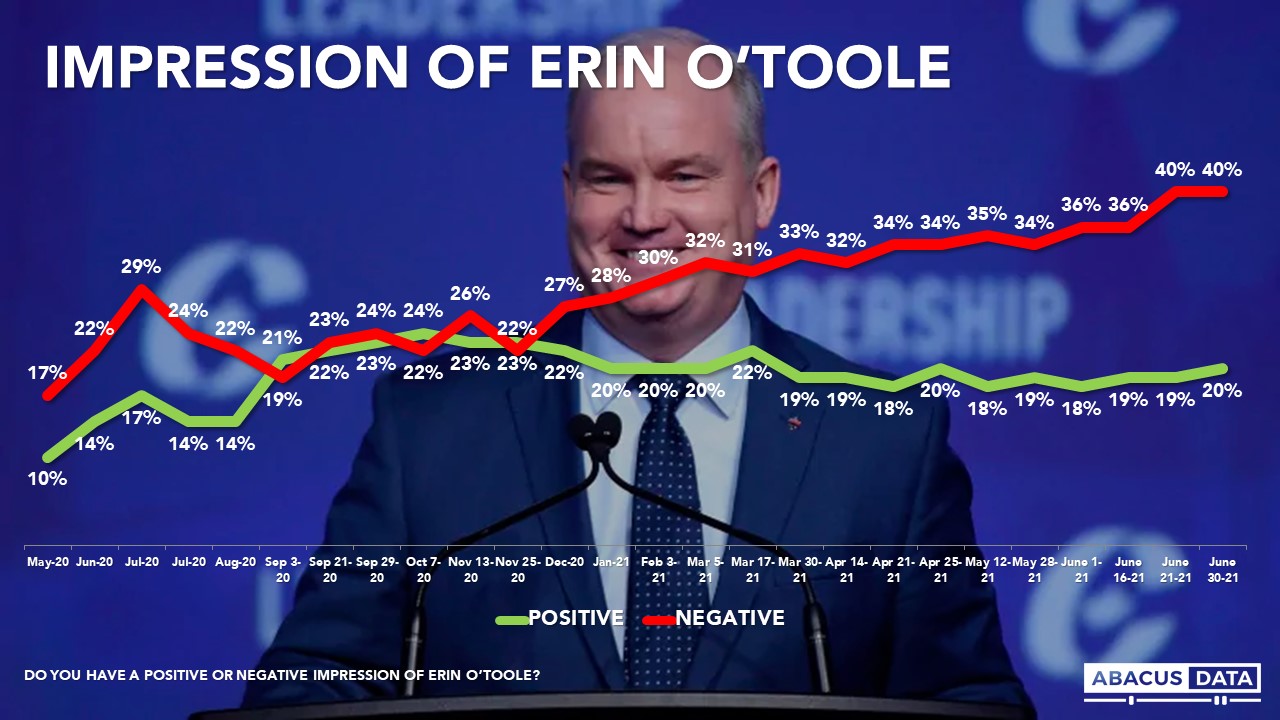 His image is better among men than women, among those with less formal education, people living in Alberta, those in the 45-59 age group, but still is more negative than positive in every one of those cohorts. His best results are in Alberta and worst numbers are in Atlantic Canada, but the balance is negative in every region, including the Prairies. Those planning on voting Liberal, Green, NDP and BQ are pretty negative towards him.

Among those who definitely think it’s time for a change in government, 34% like him, while 29% don’t. Among voters on the centre, 17% are positive, while 32% are negative. His image is roughly the same in urban, suburban and rural Canada.

Among those who say they will definitely vote 23% like him, while 42% don’t. 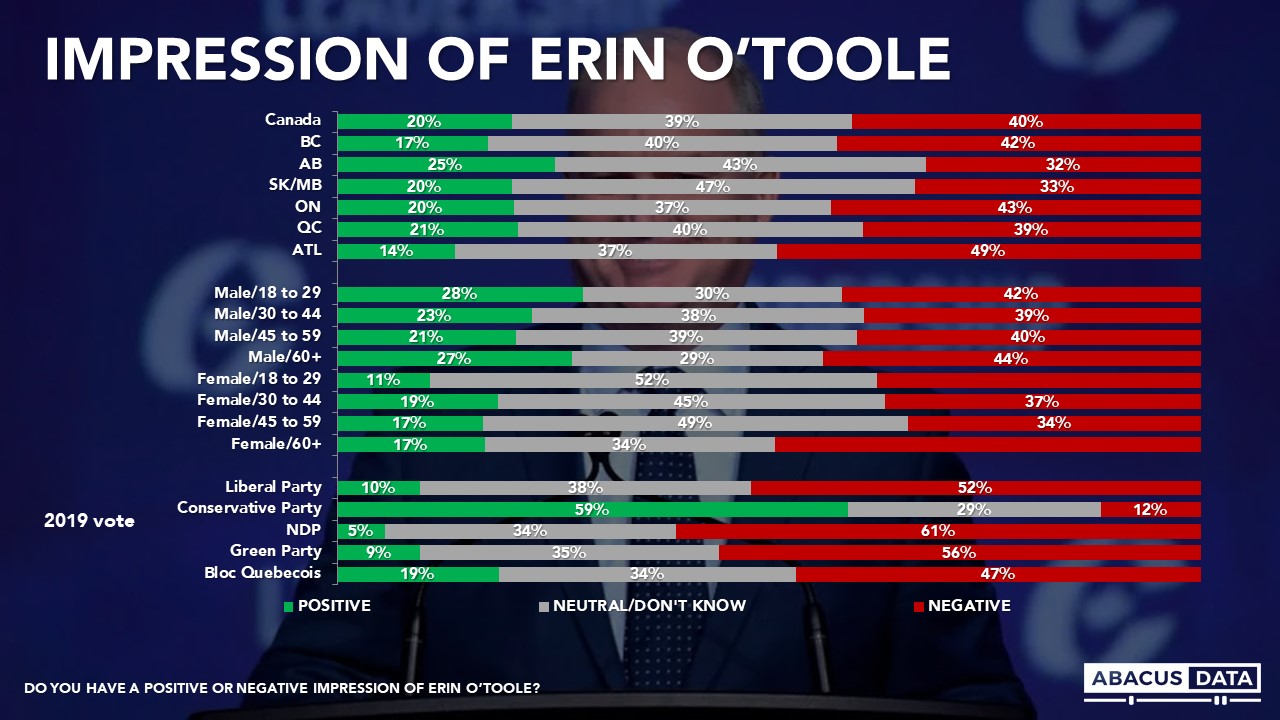 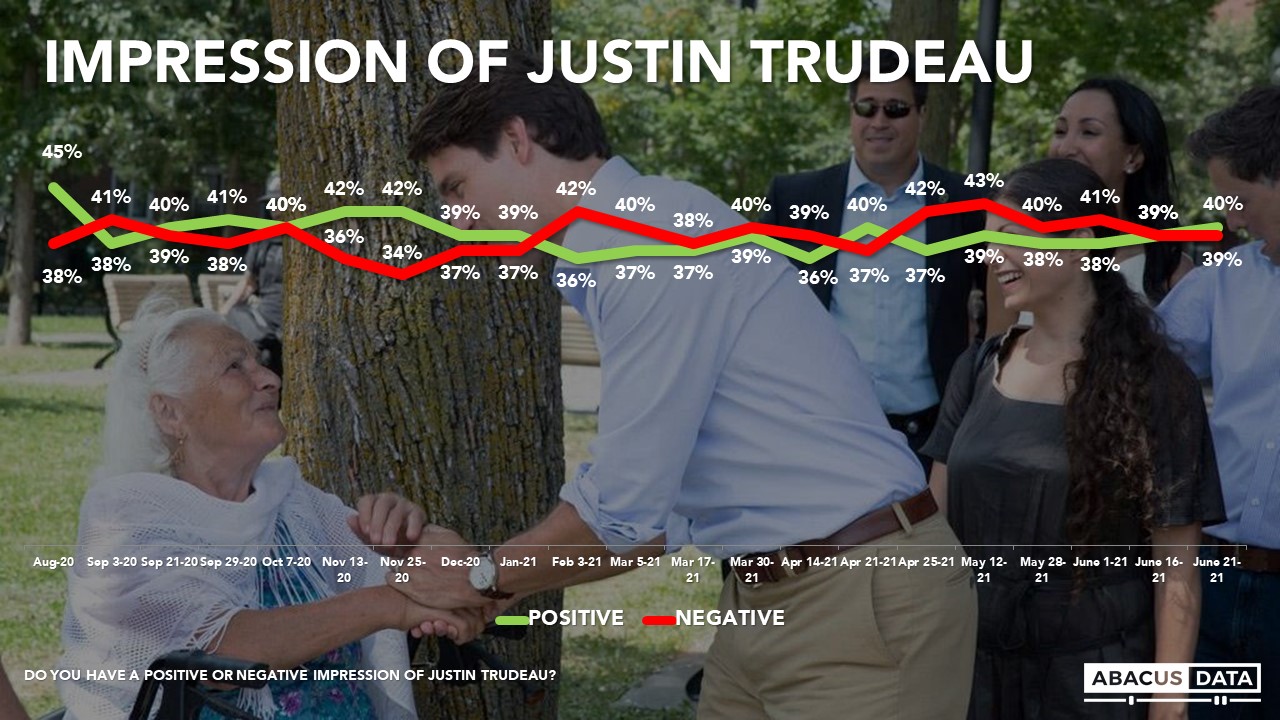 His image is doesn’t vary much by gender or age. His best results are in Quebec and worst numbers are in the Prairies. Everywhere but in the Prairies at least 40% like the Prime Minister. Those with high school education tend not to like Trudeau as much as those with a university education (35% vs. 46%). Those planning on voting Liberal like him, but supporters of all the other parties are more negative than positive towards him.

Among voters in the centre, 37% are positive, while 38% are negative. His image is better in urban and suburban areas than in rural Canada, but the differences are not that large.

Among those who say they will definitely vote 42% like him, while 40% don’t. 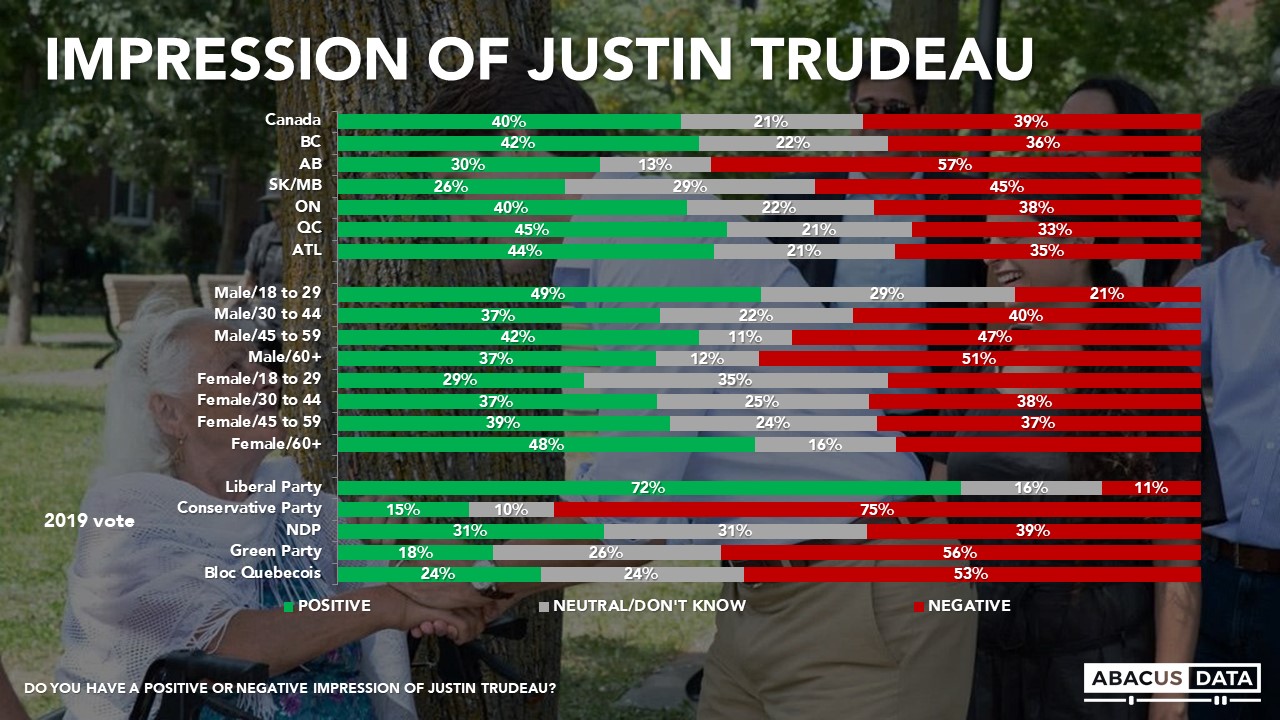 We also asked respondents to assess each leader on several items – asking them which of two words or phrases best describes the leader. A large majority of voters see Jagmeet Singh as someone with good values, an optimist, and modern. Smaller majorities see him as interesting and possessed of great ideas. People are split about whether he gets “people like them”, although 70% of those under 30 think he does. 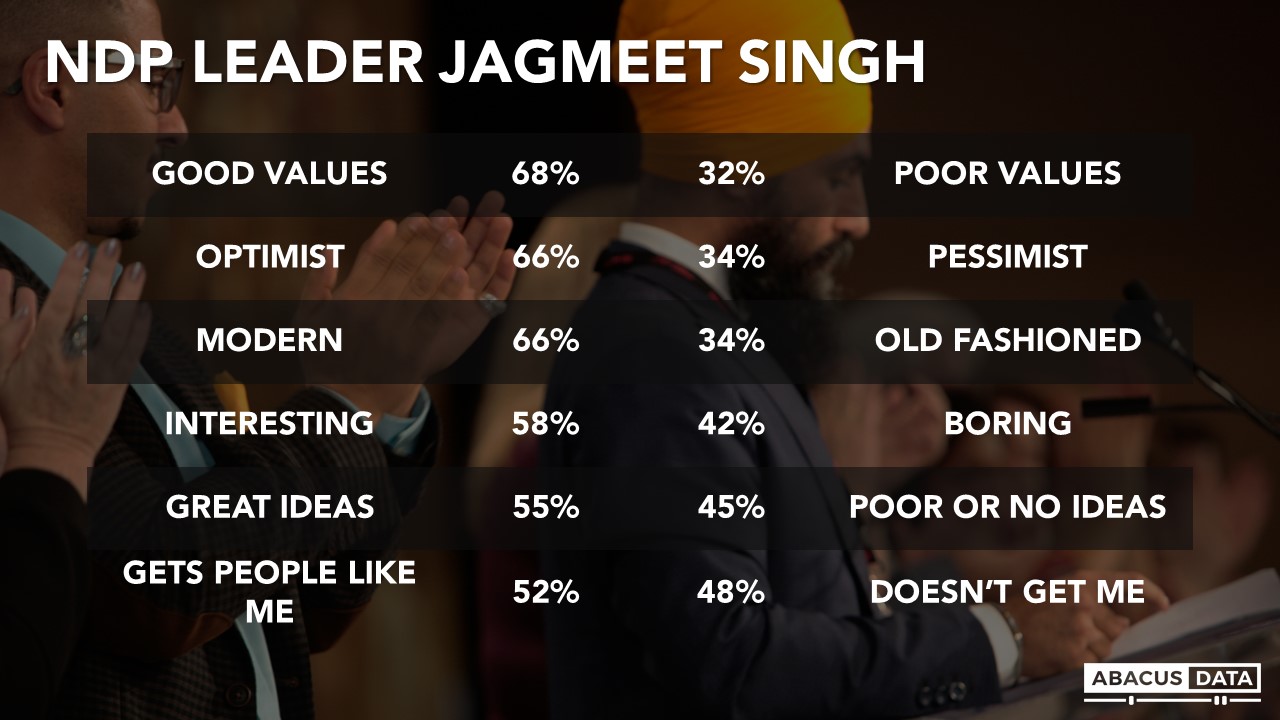 Most voters think Erin O’Toole does not get people like them, is boring, old-fashioned, and doesn’t have great ideas. People are split about whether he has good values and tend to see him as more of a pessimist than an optimist. 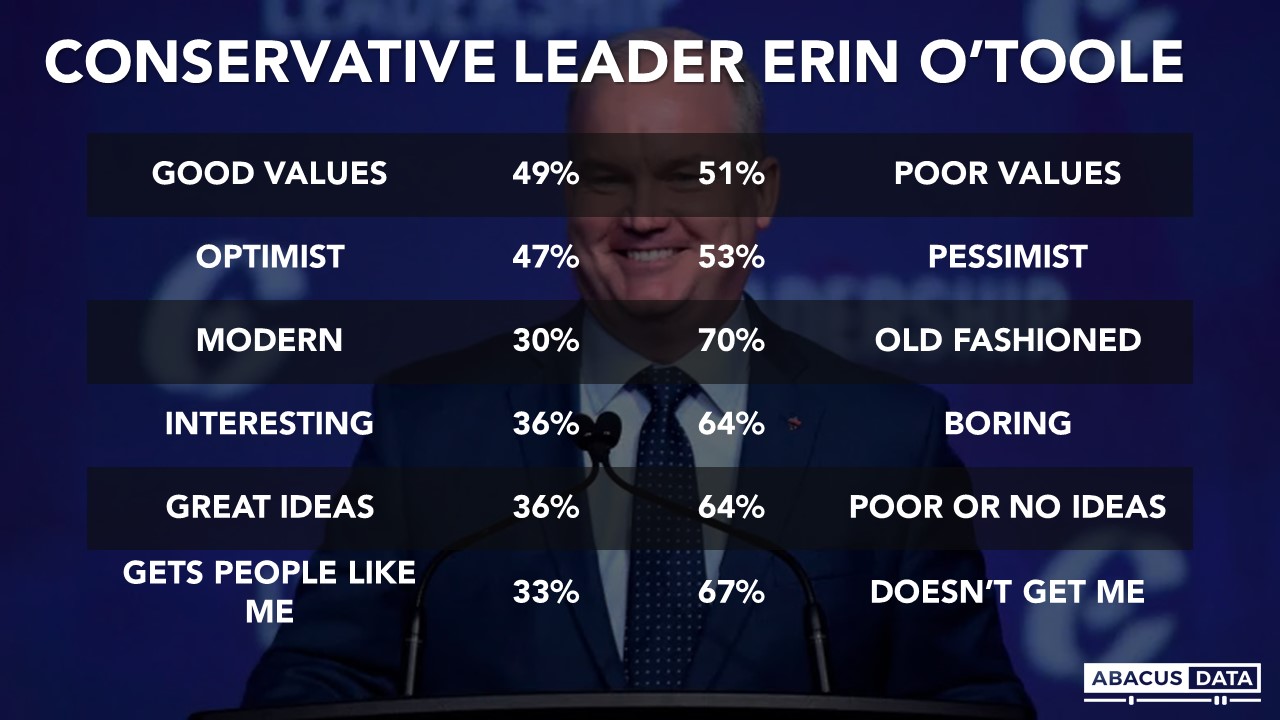 Justin Trudeau is seen by a broad majority as modern and an optimist, and a solid majority as having good values. Just over half see him as interesting, just under half say he has great ideas. A majority don’t think he really gets people like them. 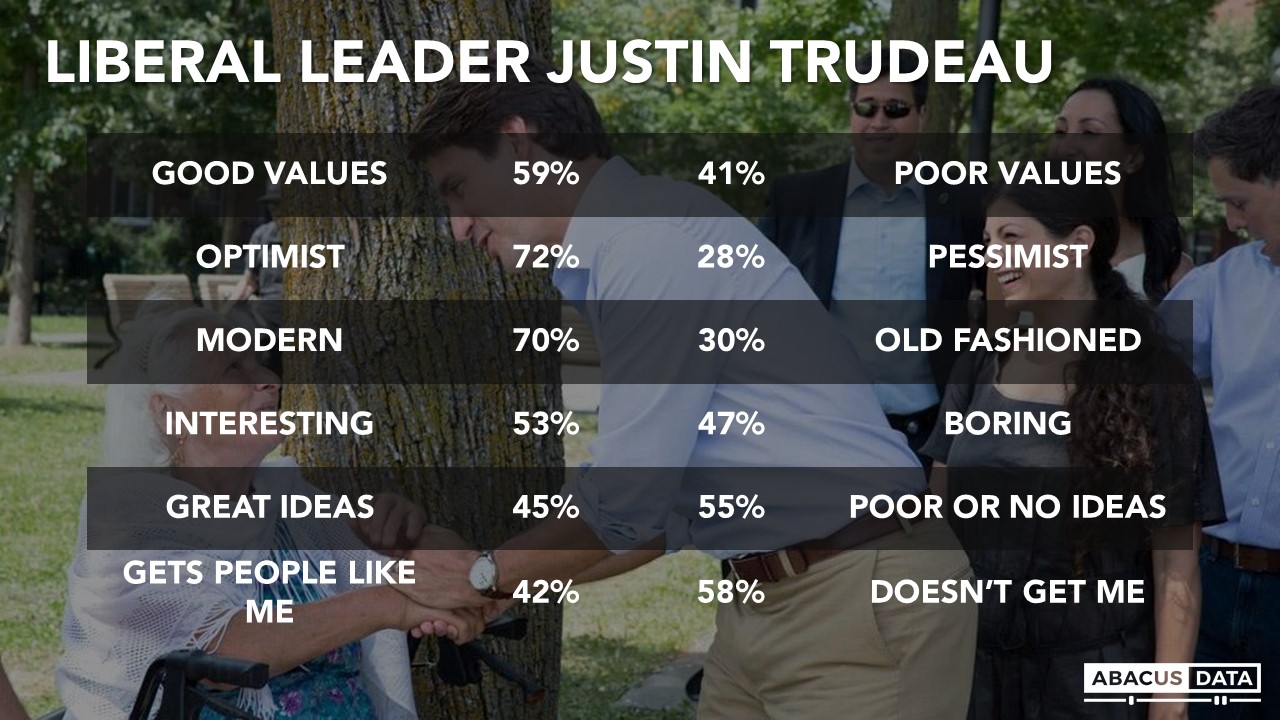 Comparing the three leaders shows that Mr. Singh has a nine-point advantage on good values over Mr. Trudeau, who is 10 points ahead of Mr. O’Toole. Both Trudeau and Singh are widely seen as optimists and modern, but voters are not sure if Mr. O’Toole is an optimist and tend to think he is not very modern.

Trudeau and Singh are relatively competitive in terms of being interesting. Singh has a 10-point advantage on “great ideas”, “gets people like me”.

Mr. O’Toole’s biggest vulnerabilities are a sense that he doesn’t have very appealing ideas, doesn’t really get the majority of voters, and hasn’t seemed interesting thus far. 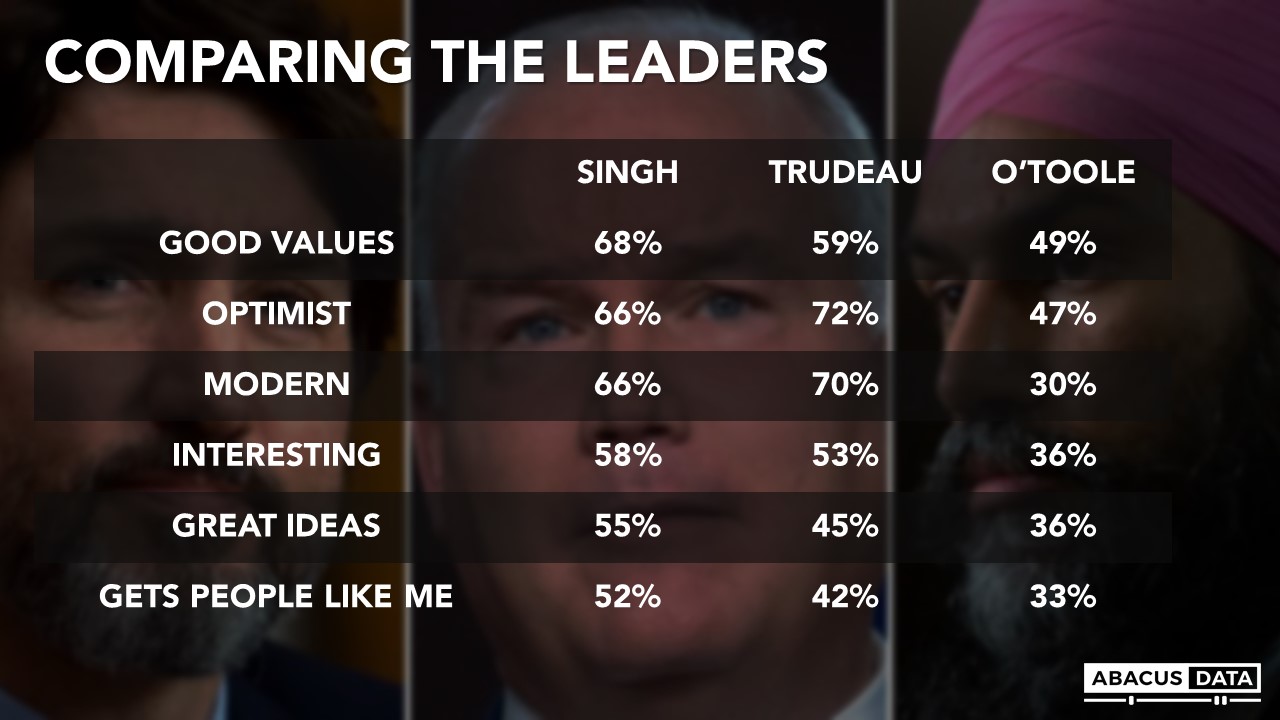 WHAT DO SWING VOTERS THINK?

If we concentrate our analysis on those who say they will definitely vote but haven’t yet made up their mind how they will vote, the data also show a modest advantage for Mr. Singh over Mr. Trudeau, both of whom are better positioned than Mr. O’Toole.

Mr. Trudeau’s biggest gaps relative to Mr. Singh are on “great ideas” and “gets people like me” where the NDP leader is ahead by at least 15 points.

Mr. O’Toole is competitive with Mr. Trudeau on “gets people like me” “great ideas” but neither scores very well with these voters. Mr. O’Toole’s biggest gaps behind Mr. Trudeau are on “modern”, “interesting” and “optimist”. 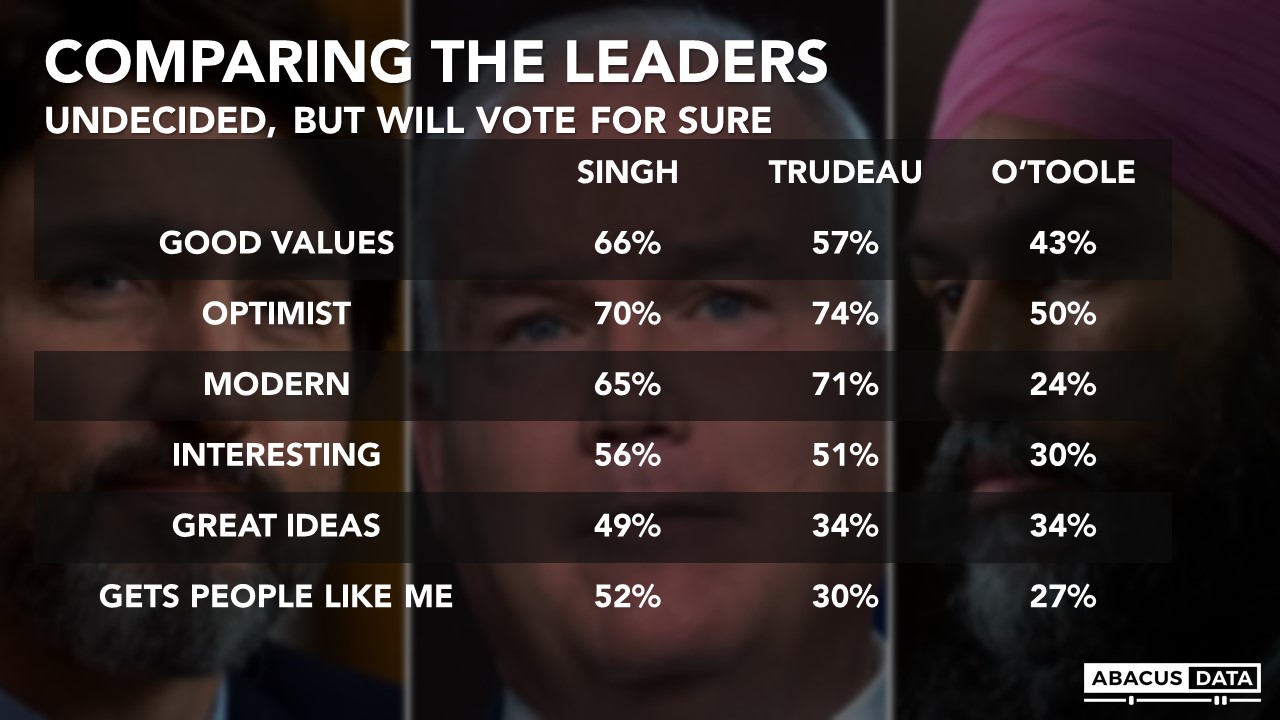 WHAT DO UNDER 30 WOMEN VOTERS THINK?

One of the more interesting voter segments we have been watching lately is women under the age of 30. Among these voters, Mr. Trudeau’s trails Mr. Singh by as many as 30 points on several of these traits.

The Conservative Party has often faced a challenge connecting with this demographic and these results suggest this remains the case. 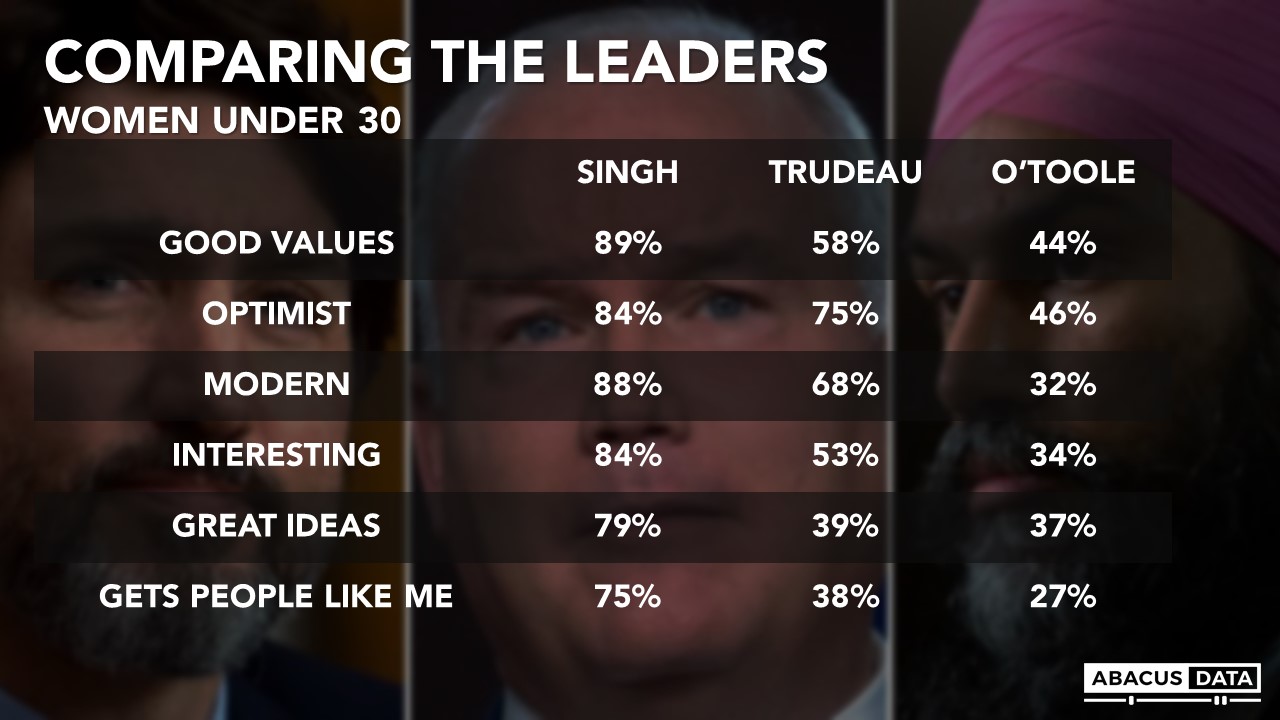 According to Bruce Anderson: “While overall voting intentions do not at this point signal a breakthrough for the NDP, these numbers suggest that one of the variables that can make a party more competitive – a popular leader – is something the NDP has right now.

For the Liberals, the data suggest some negatives have accumulated over the years Mr. Trudeau has been in power but there remains a reasonably robust amount of positive opinion towards the Prime Minister – and quite a bit more favourable impressions that those that exist for Conservative leader O’Toole.

For Mr. O’Toole, while impressions of leaders can change a lot during the course of the campaign, this would need to happen in order for the Conservatives to improve their competitiveness with the Liberals. In some respects, the numbers for Mr. O’Toole reflect a view of the party he leads more than he himself, but if his intention was to present himself as a different kind of Conservative leader, this project is not succeeding so far. With 3 out of 4 voters sensing that he does not get people like them – he has been failing to seem relevant and on point for a lot of people who might otherwise cast a ballot for change.”

According to David Coletto: “How we feel about a party’s leader is one of the most important factors in determining how we might vote. In 2011, Jack Layton convinced many of those who identified as Liberal to vote NDP thanks to their affinity for him and their dislike for Mr. Ignatieff. In 2015, Mr. Trudeau re-established Liberal support due to the optimism, change, and hope he offered and the excitement many voters had for what he stood for.

As we head towards a likely summer election call, our survey data suggest that Jagmeet Singh will start the campaign in a very strong position. He has a solid image built on a sense that he is modern, in touch with voters, and an optimist. His net favourables are the best of any federal leader at the moment.

Mr. O’Toole faces the opposite scenario. He has as many people who dislike him as Mr. Trudeau but half as many who like him. He’s seen as out of touch, old-fashioned, and lacking both charisma and good ideas. Both aren’t necessary to win but usually, a successful candidate has at least one to offer voters. Right now, most Canadians, including those who are on the fence but say they will vote, find few positive things to say about Mr. O’Toole.

Prime Minister Trudeau would start a 2021 campaign in a stronger position than in 2019. More people like him now than back then and the contrasts with Mr. O’Toole are even sharper than they were with Mr. Scheer. Although fewer people are angry and strongly dislike him, 2021 isn’t 2015 as Mr. Trudeau has few supporters with a deep affinity for him to count on. His road to re-election is built on general satisfaction with his performance and a dislike for his chief alternative, Mr. O’Toole.

Campaigns can change perceptions and impressions– especially coming out of a time when opposition leaders haven’t had much profile and voters haven’t really considered their political choices. But this data helps us understand where things stand just as the campaign is likely to start.”

The survey was conducted with 1,500 Canadian adults from June 28 to 30, 2021. A random sample of panelists were invited to complete the survey from a set of partner panels based on the Lucid exchange platform. These partners are typically double opt-in survey panels, blended to manage out potential skews in the data from a single source.

You vaxxed? Millions are asking each other and relationships might hang in the balance
2.4 million are vaccine “maybes”, another 2.4 million say “no”. More than 5 million doubt the second...
2021 is not 2019: Liberals well ahead as Conservative vote hits a new low
Liberal fortunes strengthen; Conservatives shed 5 points in a month
Liberals lead by 5 but NDP makes big gains