By Ihor Korbabicz and David Coletto

The new year brings back a more familiar political reality for Doug Ford, with the Premier’s net popularity dropping from its high of +30 in the early days of the pandemic, to a peak of +35 in August, to just +4 today. Just about four in ten Ontarians have a positive impression of the premier while 35% have a negative one. While still well below the average 50 to 60% disapproval rating we tracked throughout 2019, the trendline suggests things are not moving in the Premier’s favour. 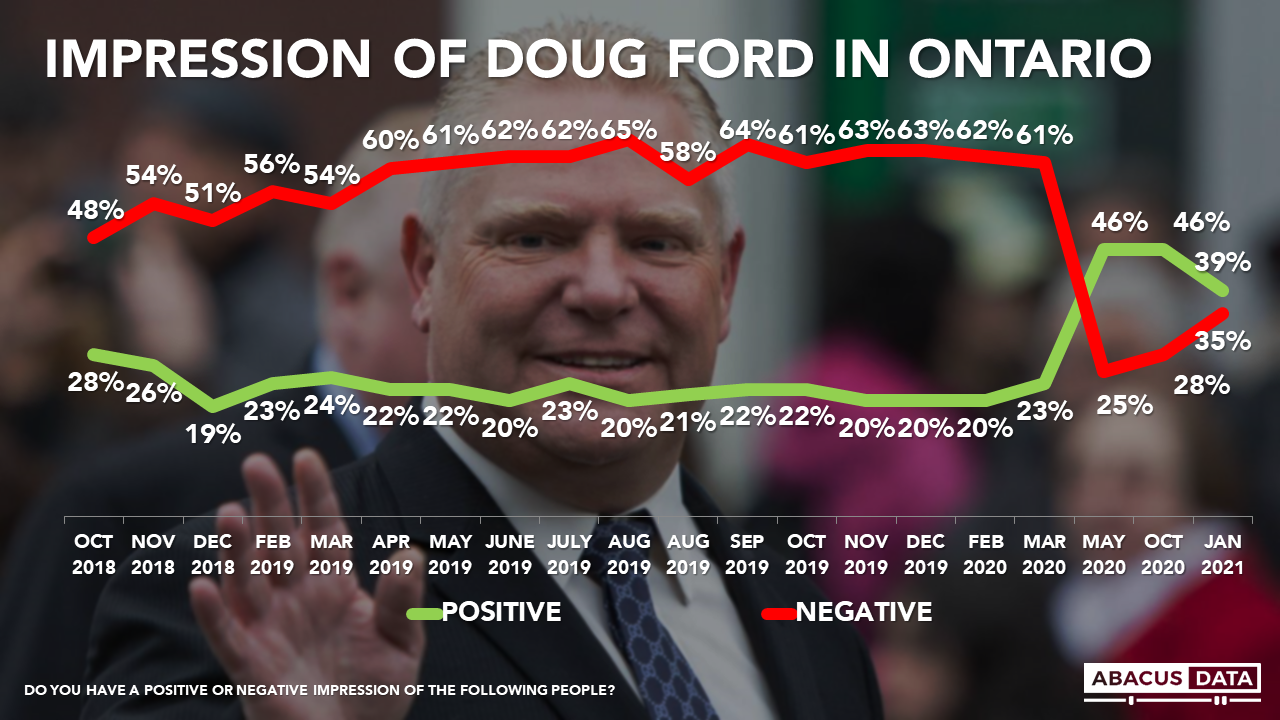 But none of his political adversaries are benefiting from Ford’s weakness, however, with all opposition figures stagnating at previous favourability levels. Four in ten Ontarians continue to not know enough about Steven Del Duca to have an opinion while Andrea Horwath’s image remains mixed, with many still having a neutral view of the long-time NDP leader. Doug Ford continues to be the most popular party leader in the province. 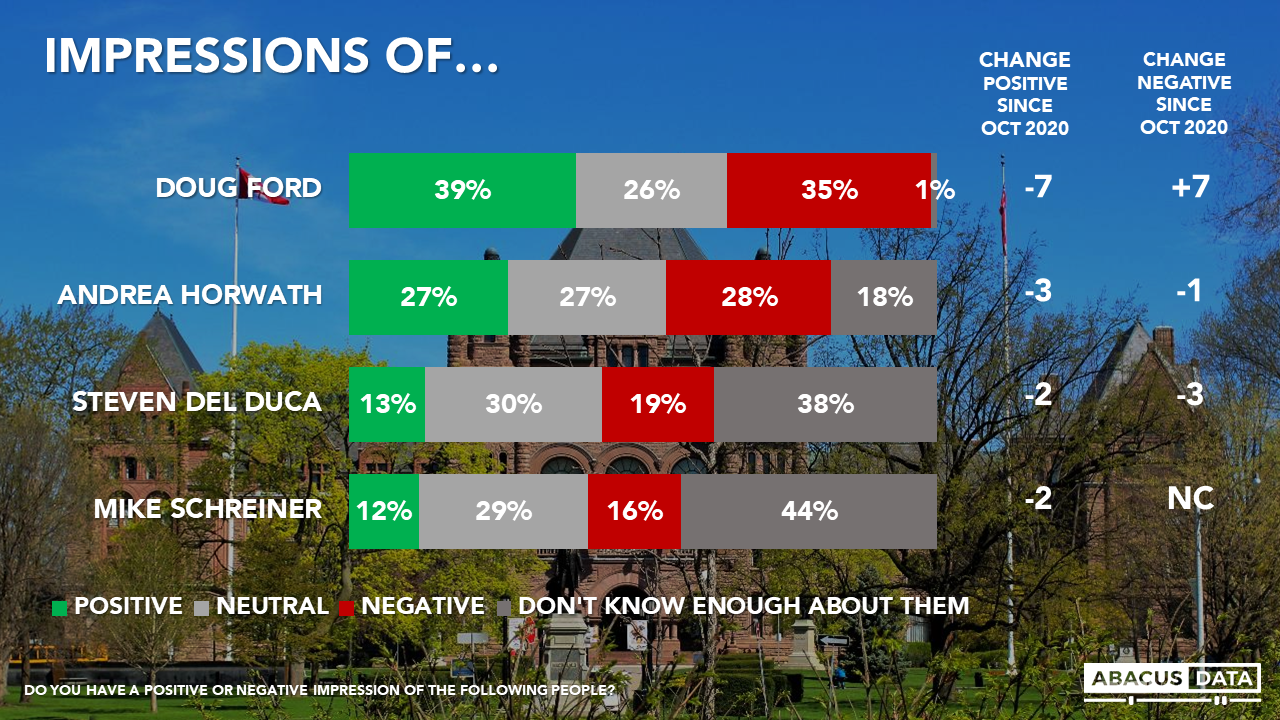 Impressions of the Ford government overall are moving in tandem with the Premier’s image. Since our last survey in October, the provincial government’s approval rating is down 8-points, however, more still approve of the government’s job performance than disapprove. 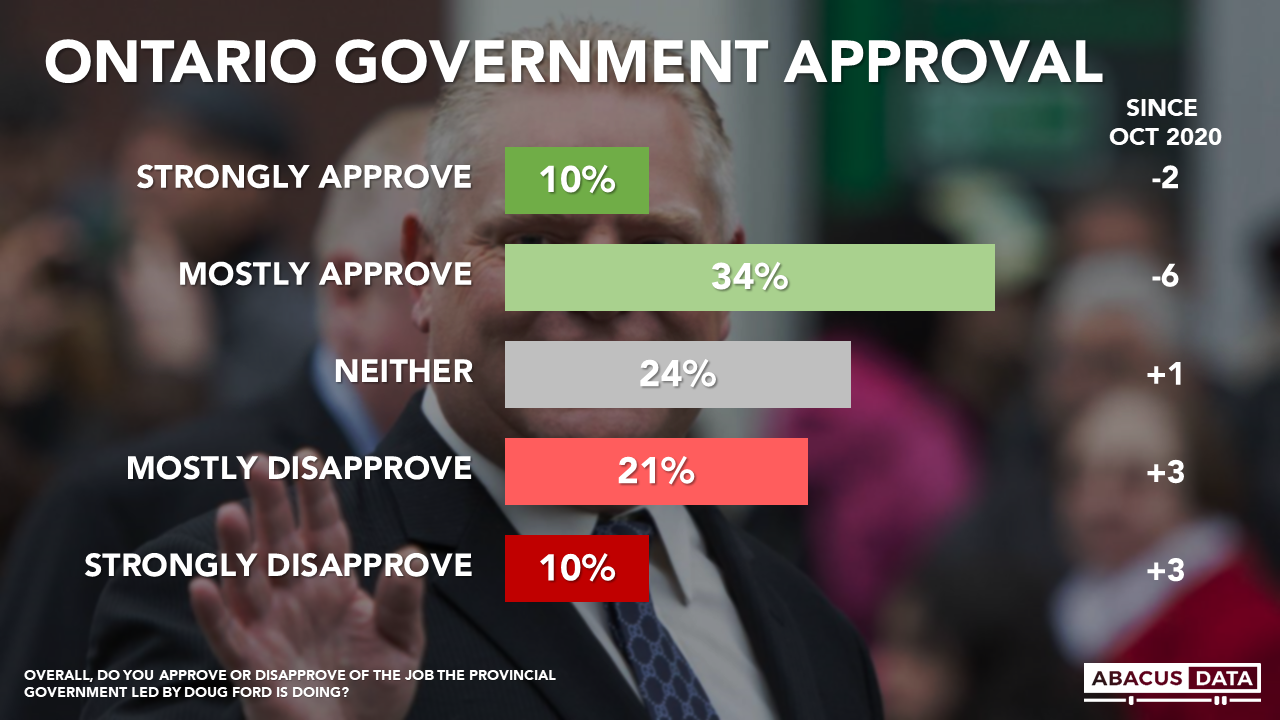 Case in point: Were the election called today, 34% of Ontarians would vote for Doug Ford and the PC Party, 29% would vote Liberal and 25% would vote for the NDP. These figures are all within the error margin of results measured late last fall. 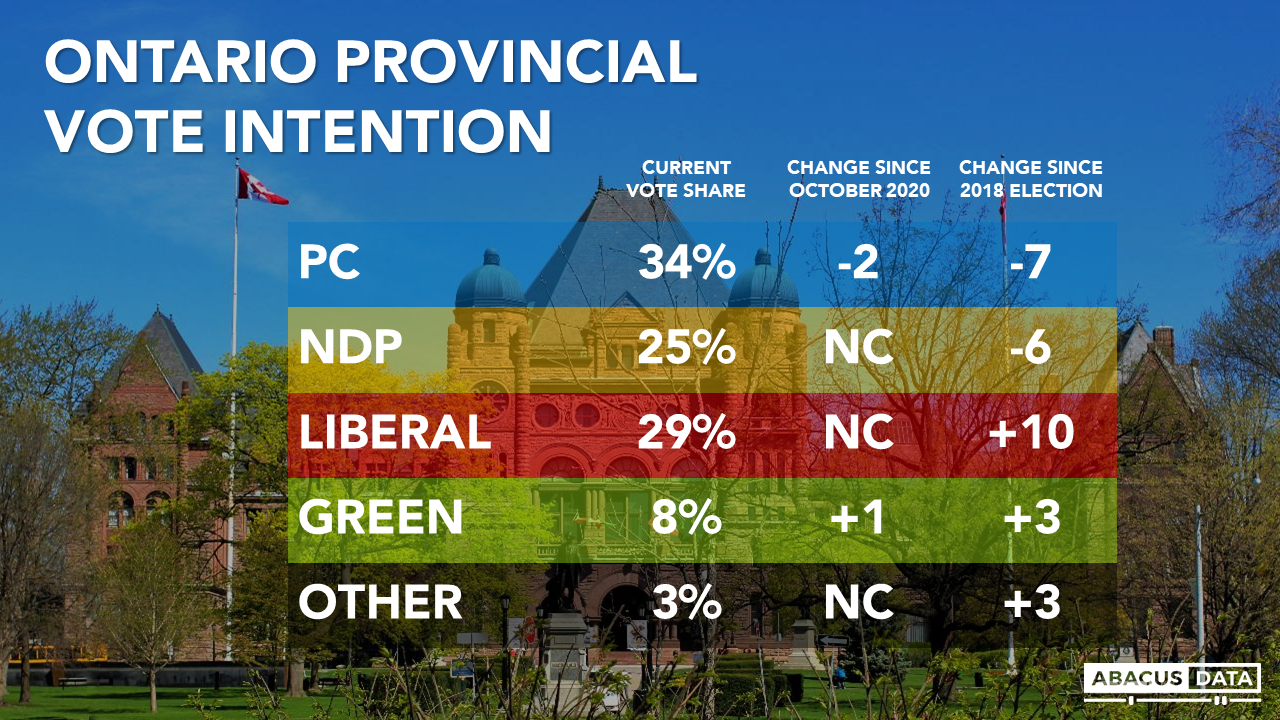 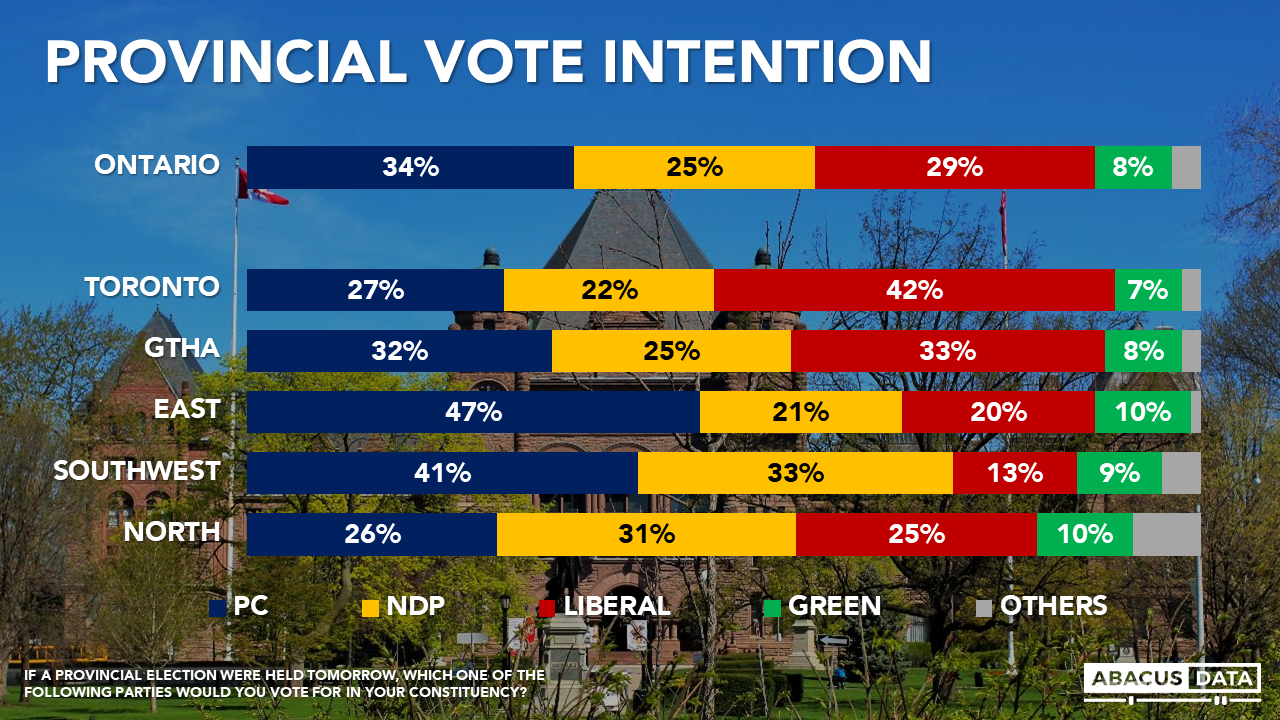 As the rise in the government’s approval rating was tied to its performance around the pandemic, so too is its decline.

Our latest survey finds substantial declines in public assessments of the government’s approach to the pandemic.

Only 37% now believe the Ontario government is in control of the situation today, a drop of 25-points over the past months. The belief that the province has a clear plan, is providing consistent and advice and guidance and is generally making the right decisions have all dropped significantly in the last few months. Most Ontarians still believe the Ontario government is making public health the priority, but even this is only believed by a slim majority (61%). 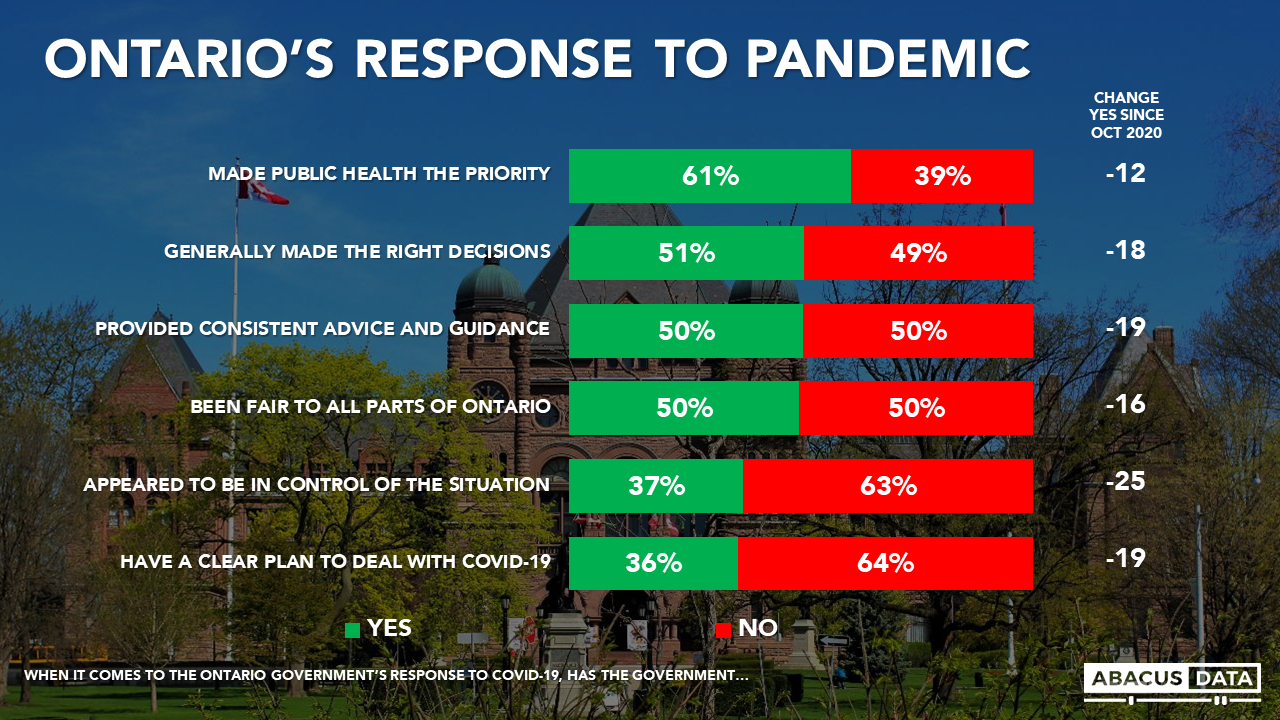 The survey also asked about the government’s COVID-19 performance in specific policy areas. In most of these, a majority felt the government was doing a poor job, especially when it comes to long-term care, reducing the number of people getting COVID-19, dealing with the backlog for surgeries and treatments, and preparing for a second wave. 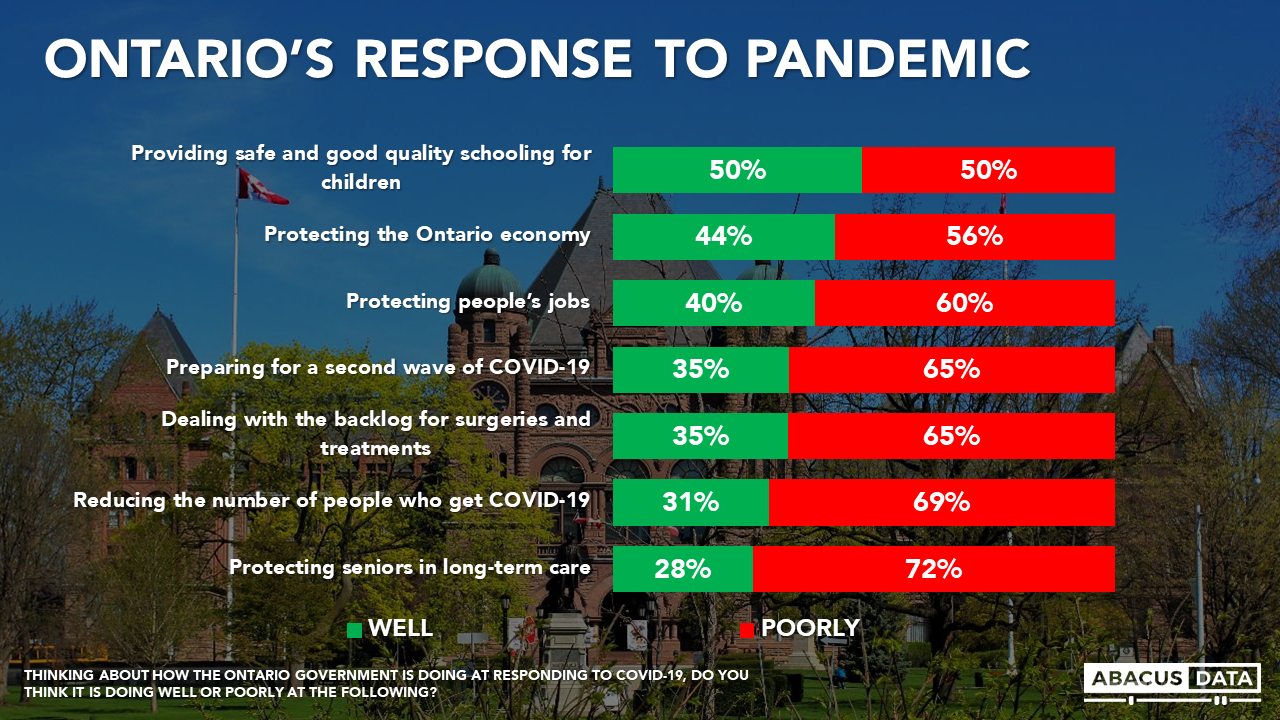 When asked about Doug Ford’s overall response to COVID-19 in general, 27% of Ontarians today believe he has done a bad job and made crucial mistakes, an increase of 10-points since October. Most still believe he has made mistakes but has done as well as can be expected.

When pressed on his performance on the rollout of vaccines specifically, Ontarians give Premier Ford a better assessment than they do of the government’s response in general. 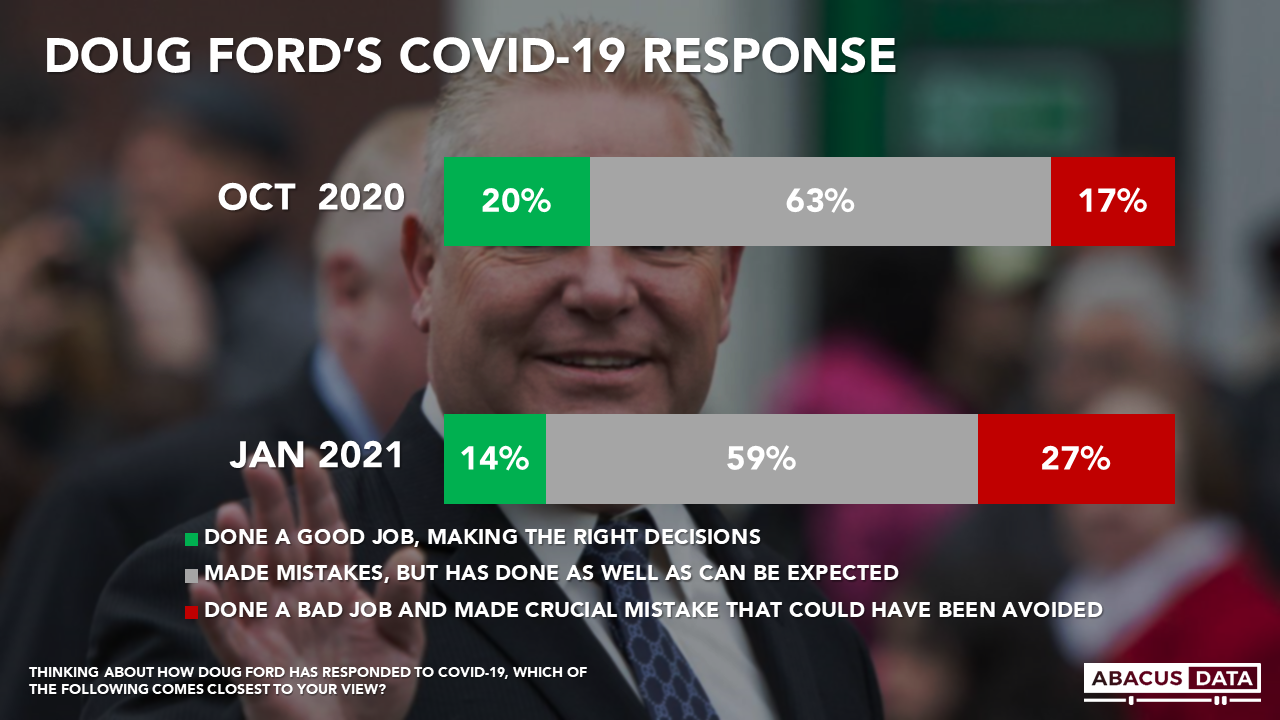 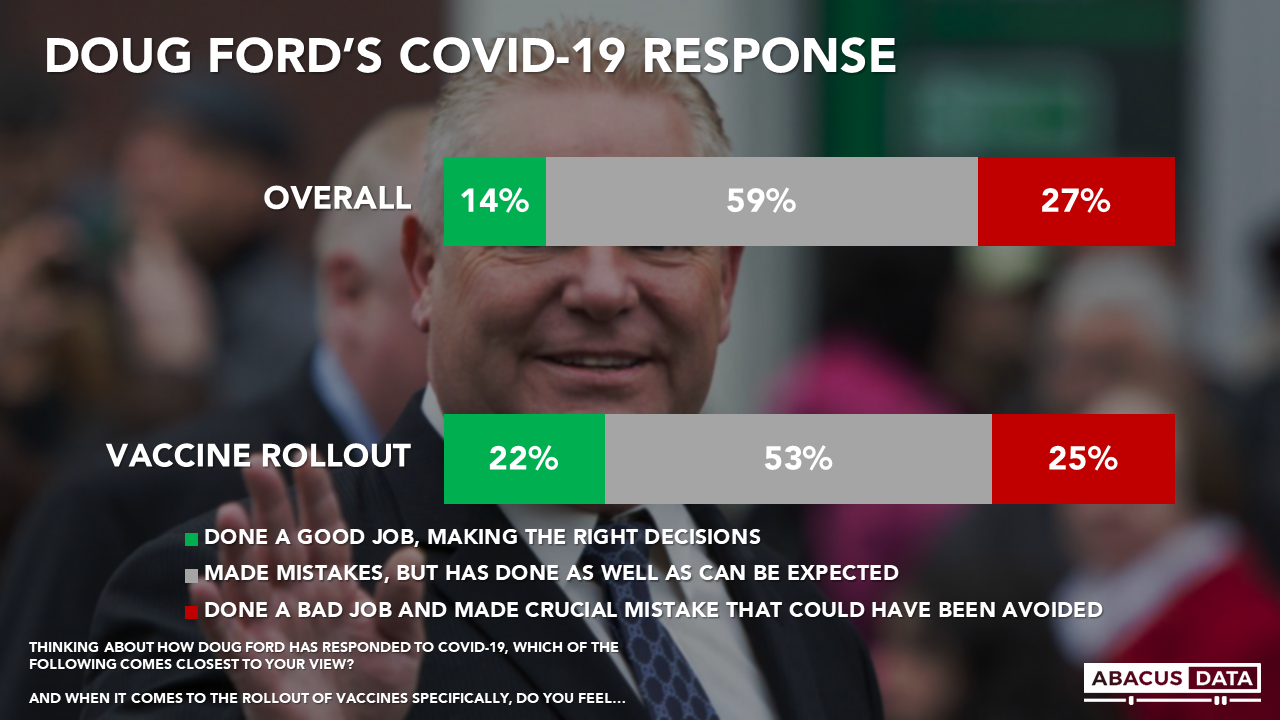 However, Ontarians are split on whether the current state of vaccine distribution is going well or poorly overall, with more leaning towards poor. This is not necessarily a partisan proposition – as many Liberal and PC voters believe it is going well, with a sizable minority of NDP and Green Party voters agreeing. But it is strongly correlated with whether one approves of the provincial government today, and how well they believe the province is doing on COVID-19 more generally. 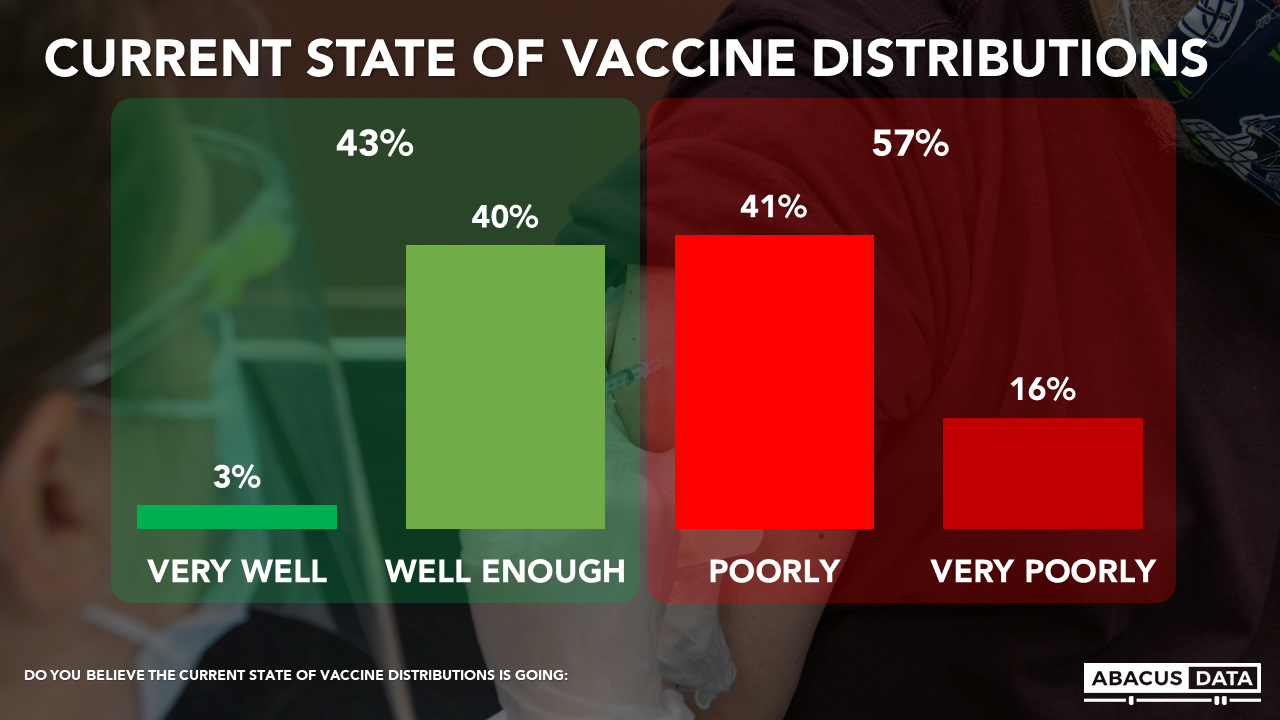 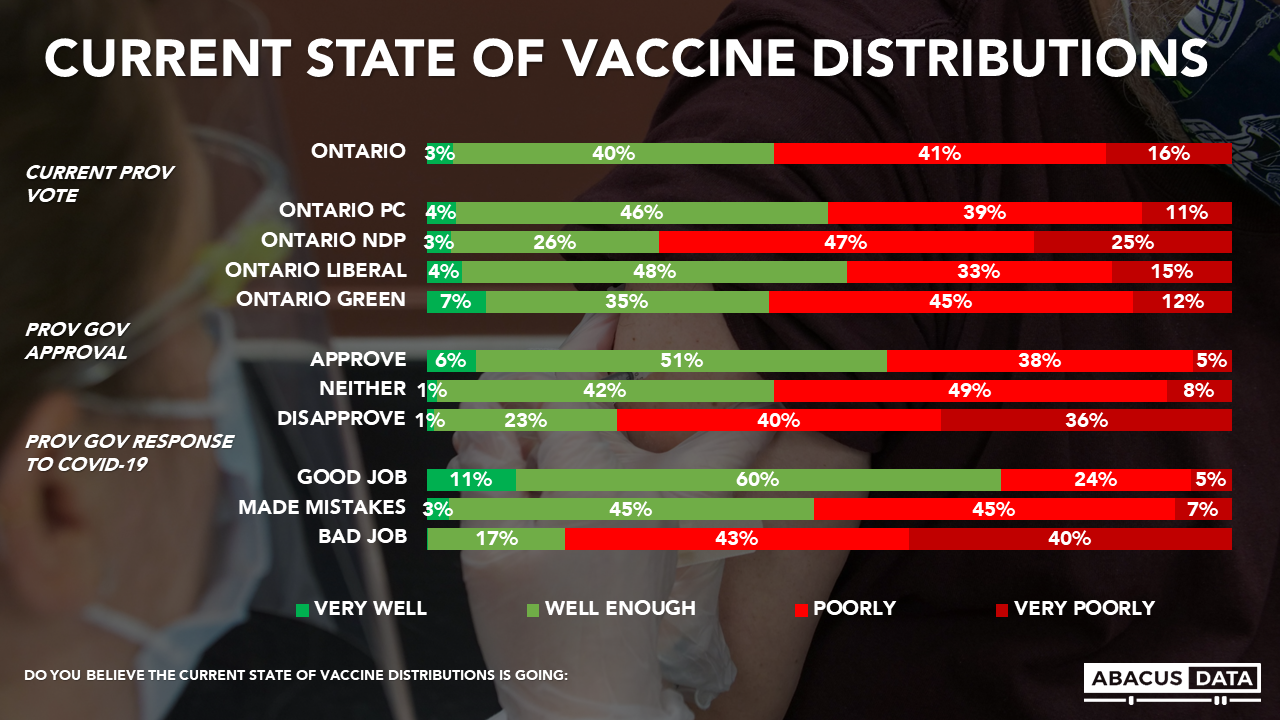 Voters are definitively united on one thing: the clear majority are of the view that politicians and health leaders leaving the country for holidays is completely unacceptable (75%). Most of the remainder either believe it unacceptable but understandable or have no view, rather than thinking it acceptable. 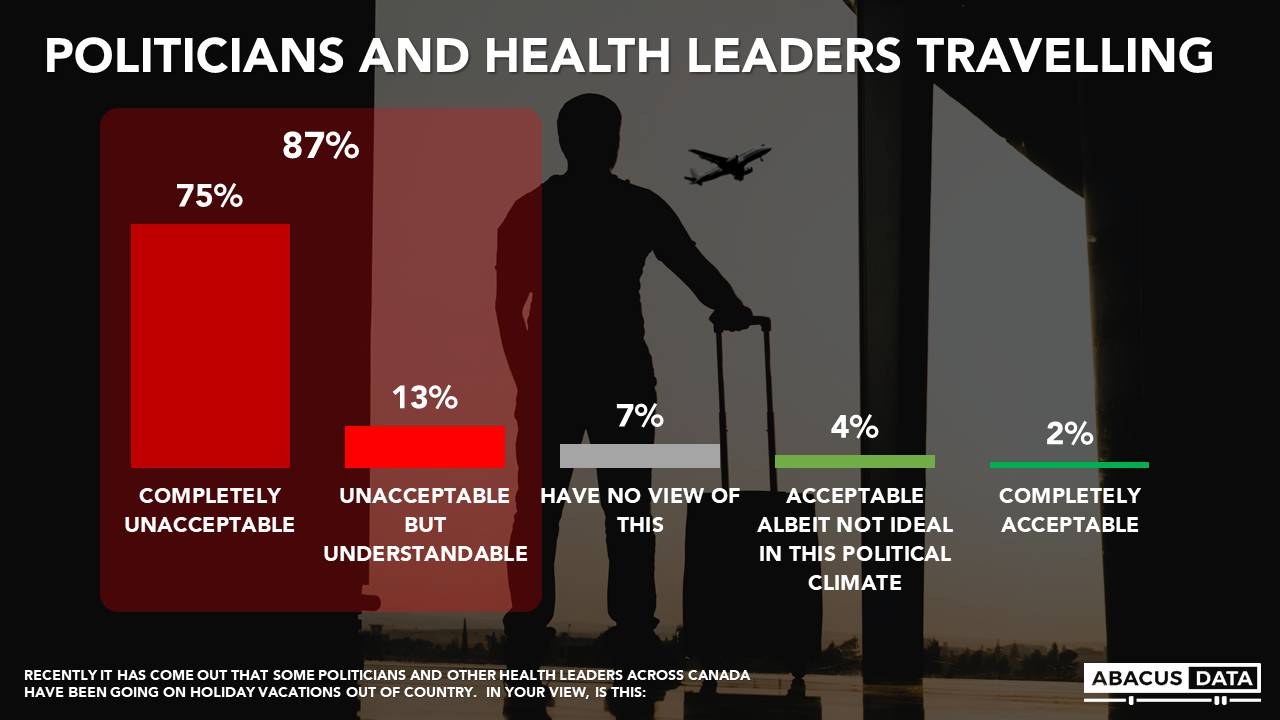 The case of former finance minister Rod Phillips served as a lightning rod for public disappointment. Nine in 10 have heard about the former minister’s vacation to the Caribbean over the holidays. Of those aware, only 37% believe the premier handled the situation well while 49% believe he handled it poorly, with 14% suggesting it was largely out of his hands. 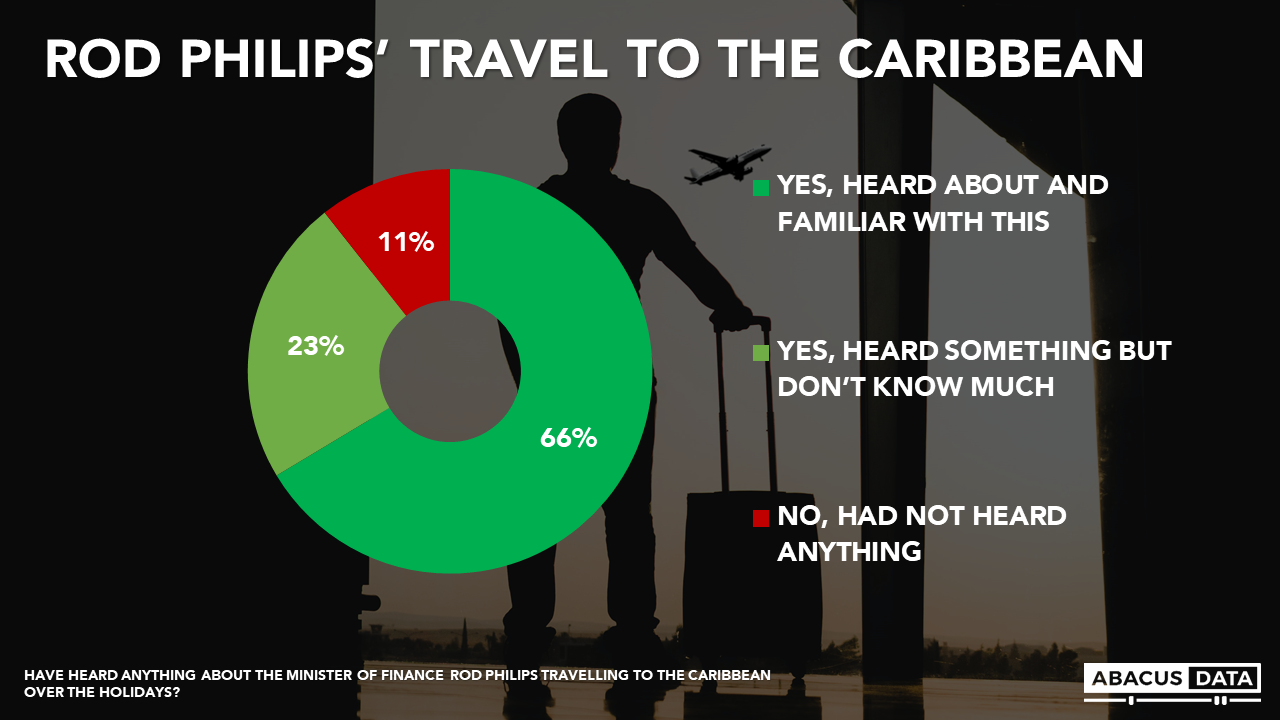 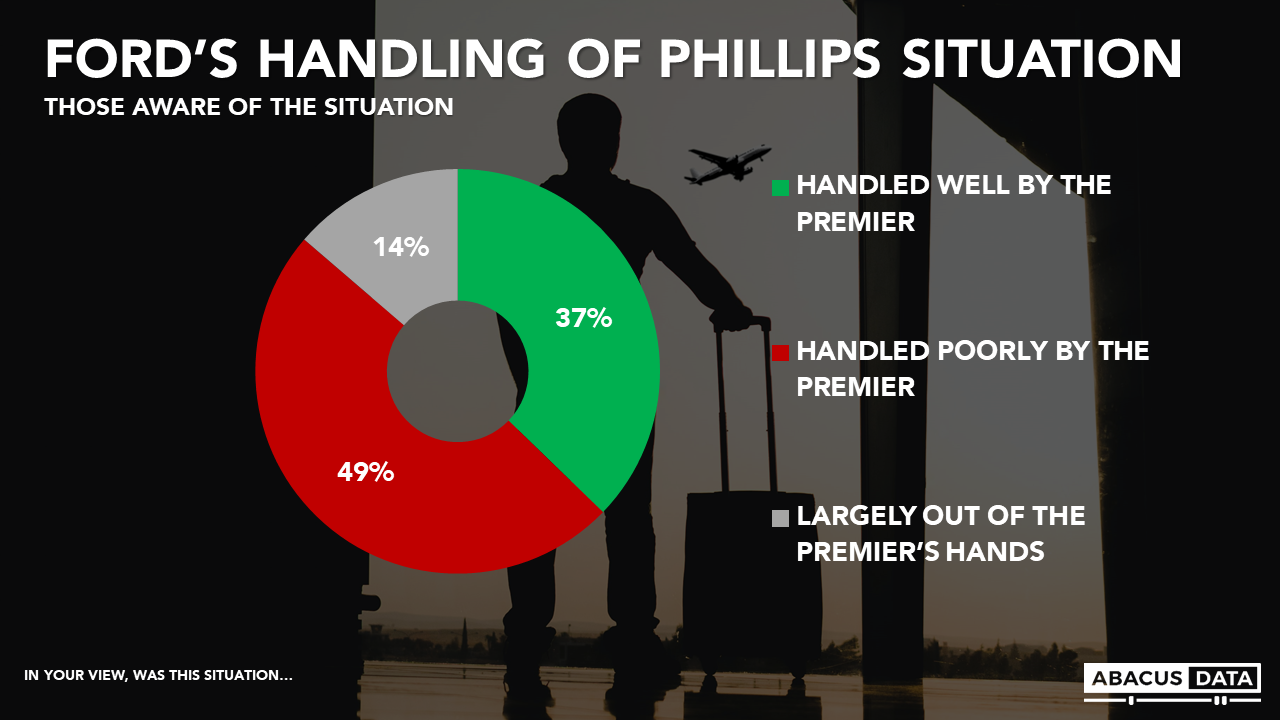 When the sequence of events and Ford’s announcement of his resignation is laid out to them, Ontarians are neatly split in their reaction. Half believe Philips’ resignation was sufficient, four in ten believe it was not nearly enough.

In contrast, a small minority (7%) believe the premier went too far and believe the finance minister should not have resigned at all. Ontarians’ view of this is associated with their existing view of and support for the provincial government in general, though 29% of the government’s boosters believe the reaction was not nearly enough. 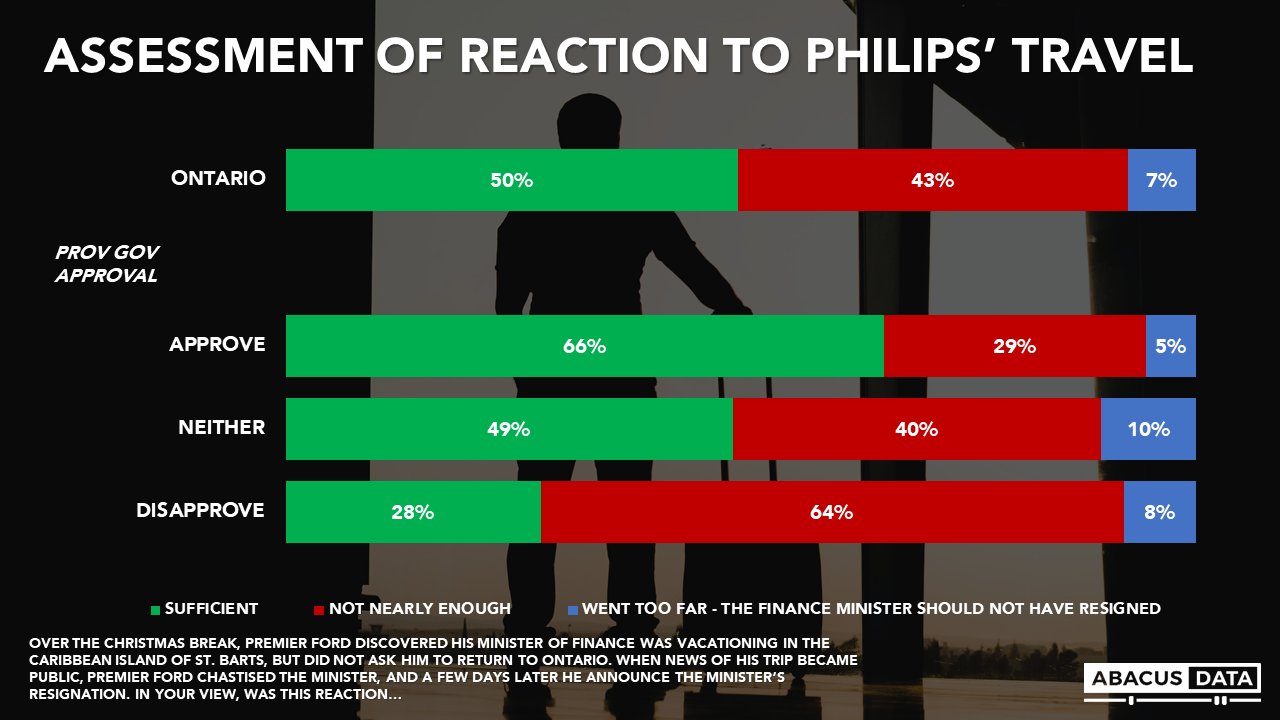 There’s no doubt that a lot of the fundamentals are in decline for the Ford Government. His personal reputation, assessments of his government’s leadership, and assessments of his handling of COVID-19 have all been in a steady decline over the past few months. However, vote dynamics are largely unchanged. The Liberals, steadily in second place, are merely standing in as a reliable placeholder. Most Ontarians don’t know what to think of Del Duca yet.

While Ontarians hunker down and do their best to follow public health guidance, they are paying attention to the political class, and are noticing and are angry about the apparent set of rules they must follow and those followed by some making the rules themselves. Yet, this is where Premier Ford continues to have some resilience – on his motivations. Most continue to believe that despite making some mistakes, he is still doing his best during this challenging period. Despite criticism and frustration over his role in his government’s management of long-term care and school closures, most continue to believe the premier is doing the best he can under difficult circumstances.

While it is impossible to predict the future, we see that should the worst of the pandemic be behind us in this quarter, the Premier Ford just might salvage some of the goodwill he has built over the past ten months. Should things take a turn for the worse – the trajectory is clear. Ontarians are increasingly losing patience over the situation and may come around to assessing the Premier as poorly as they were at the heights of his unpopularity pre-pandemic.

Should this happen, a drop in vote intention and perhaps a consolidation behind one opposition may follow suit.

Interested in a deeper dive on the latest polling in the run-up to a possible federal election? Register today for David’s new webinar series inFocus with David Coletto on February 9, 2021.

The survey was conducted with 793 Ontario residents January 8 to 12, 2021. A random sample of panelists were invited to complete the survey from a set of partner panels based on the Lucid exchange platform. These partners are typically double opt-in survey panels, blended to manage out potential skews in the data from a single source.

This poll was conducted and paid for by Abacus Data.

Ontario PCs lead by 7 even as Ford Government approval drops 8 points
A Premier Ford Reset? Public yet to clue in as negatives hold steady
Arts and culture during a pandemic and what will come next
Tags: COVID-19doug fordOntario politics