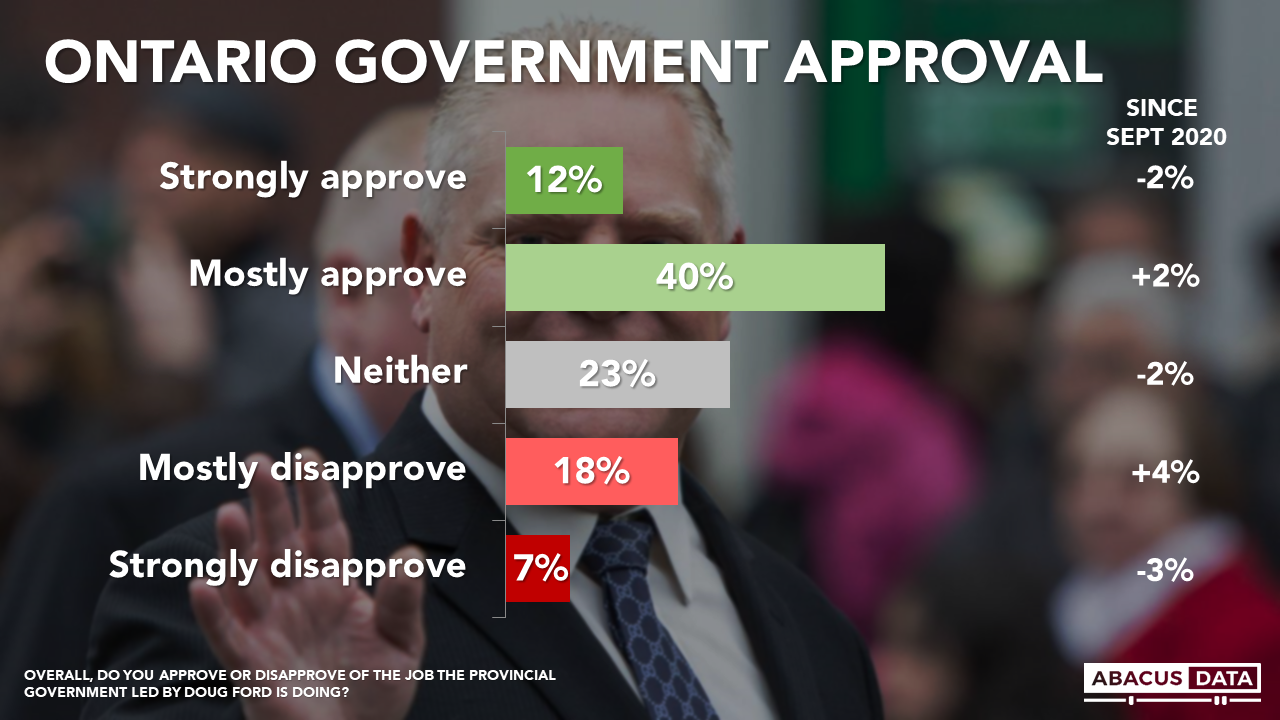 The budget comes at a time when more Ontarians tend to believe the Ontario government is performing well on handling aspects and impacts of the pandemics than doing poorly.

HOW HAS THE GOVERNMENT HANDLED ITS COVID-19 RESPONSE?

Ontarians have mixed views on the government’s handling of the pandemic. More think the Ford government has done well preparing for a second wave (46% to 37%), protecting the Ontario economy (44% to 32%), and reducing the number of people who get COVID-19 (42% to 37%).

The government performs worst when it comes to dealing with the backlog of surgeries and treatments (38% say they are doing badly) and in its handling of long-term care (49% think it is handling the issue badly).

Perhaps more importantly, regardless of how Ontarians see the government on specific criteria, clear majorities believe the Ford government’s intentions are sound. Most believe the Ford Government made public health the priority (73%), provided consistent advice and guidance (69%), responded fairly to all regions (66%), and generally made the right decisions (69%).

Where Ontarians are more tepid is on their perception of what comes next. Just under half (45%) do not believe the government has a clear plan to deal with COVID-19. 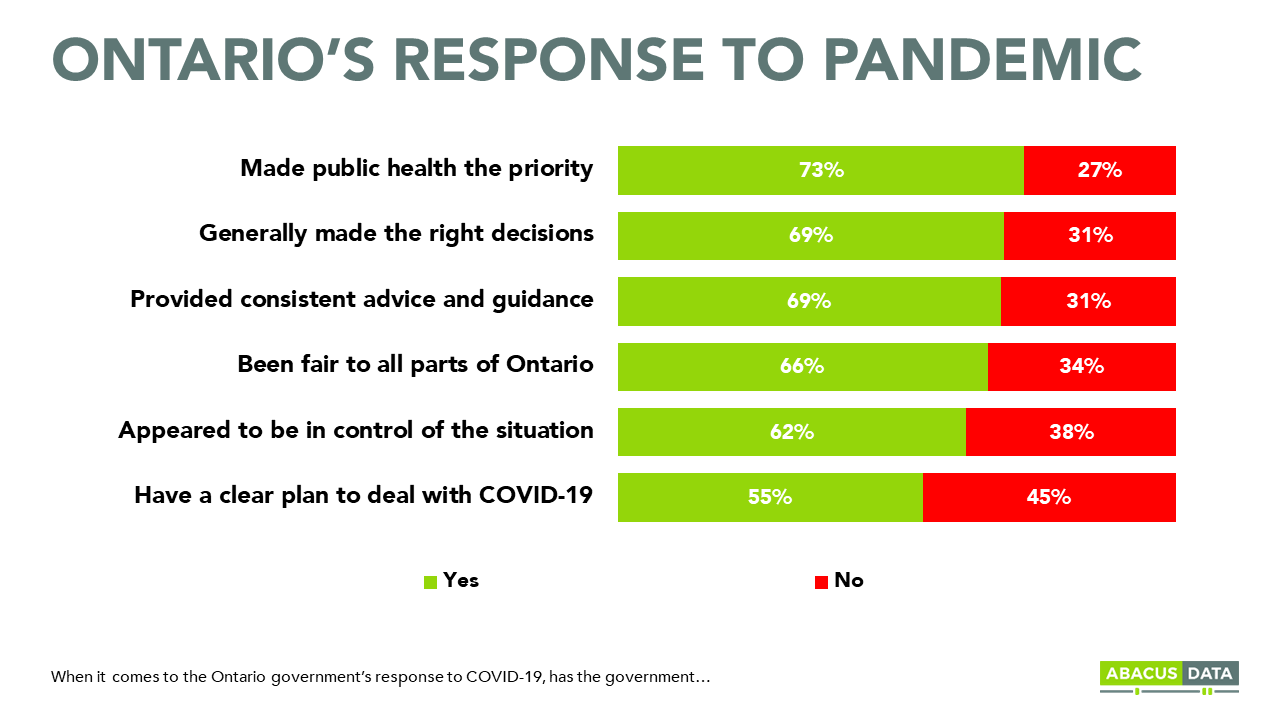 Most Ontarians give credit for the strength of the response to Doug Ford. The vast majority (83%) believe the premier has done as well as can be expected if not better, with only one in five suggesting he has made crucial mistakes that could have been avoided in his handling of the crisis. 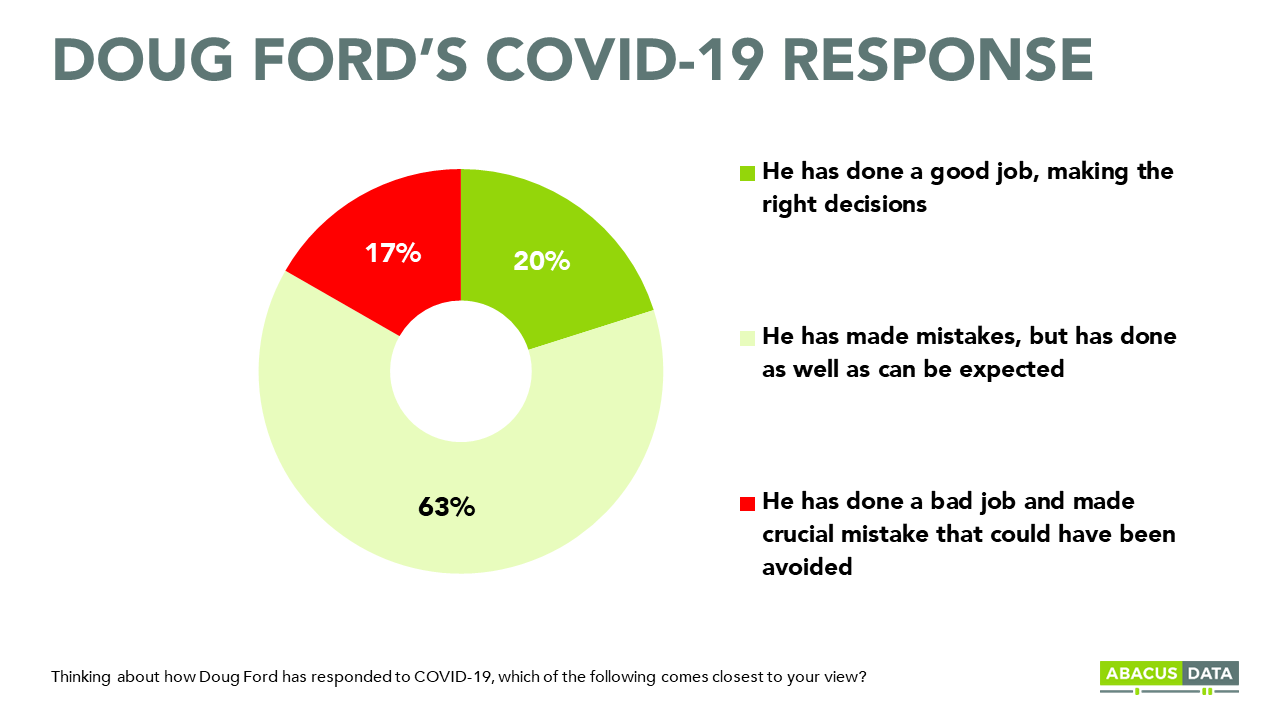 This view is a real asset to the PCs, with the majority of both Liberal and NDP supporters feeling he has done as well as can be expected. 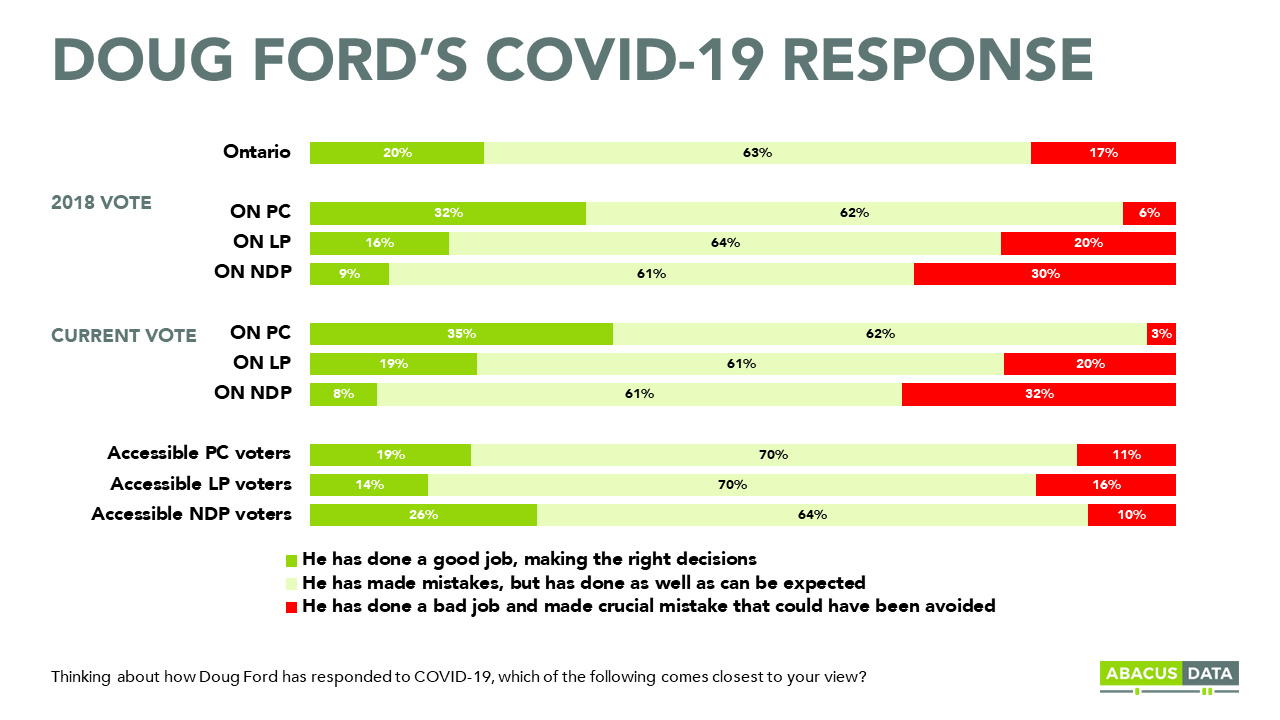 TORIES LEAD BY 7 AS HEADWINDS PUSH NDP INTO THIRD

With the above in mind, it should come as no surprise that the government maintains a lead in vote share. If an election were called tomorrow, 36% of Ontarians would vote PC, steady from our poll in early October. Support for the opposition parties remains divided with the Ontario Liberals at 29% (a 10-point gain from their 2018 total) and the NDP at 25% (down 9 points from their breakthrough in 2018). 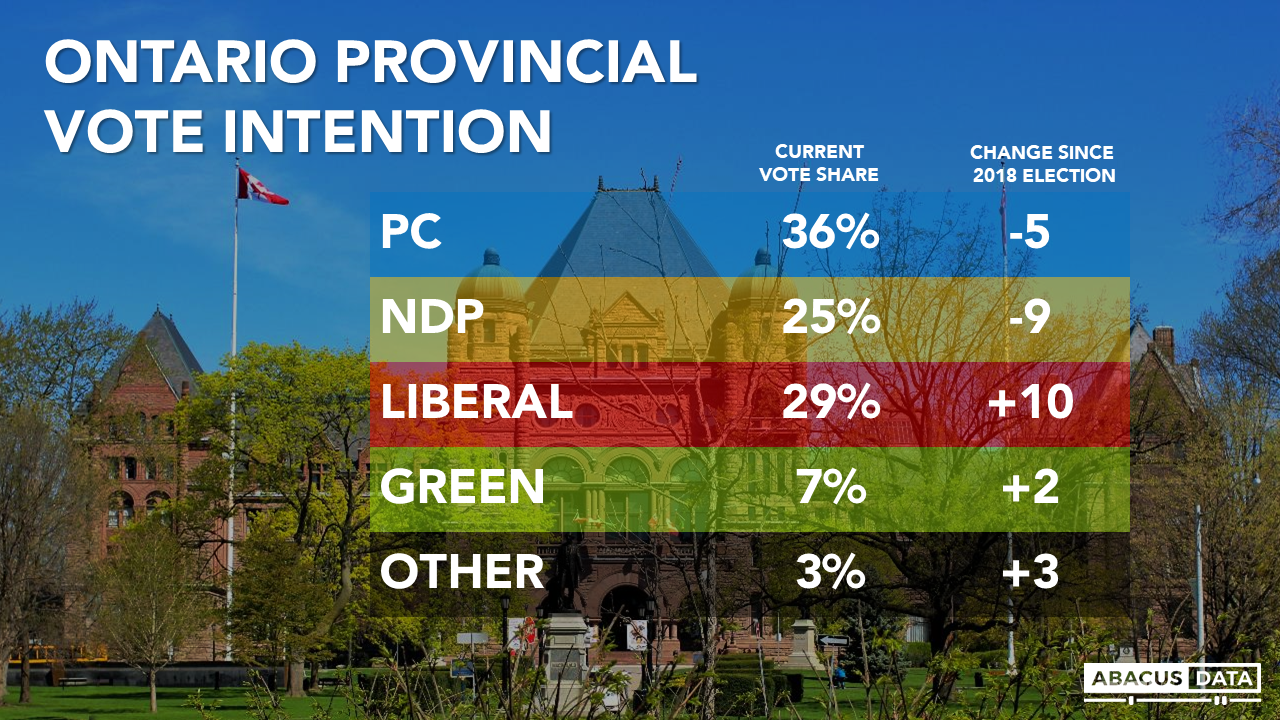 What was a 3-way race in Toronto a few weeks back now looks more of a two-party contest between the Liberals and the PCs, with the PCs leading in every other region in the province. 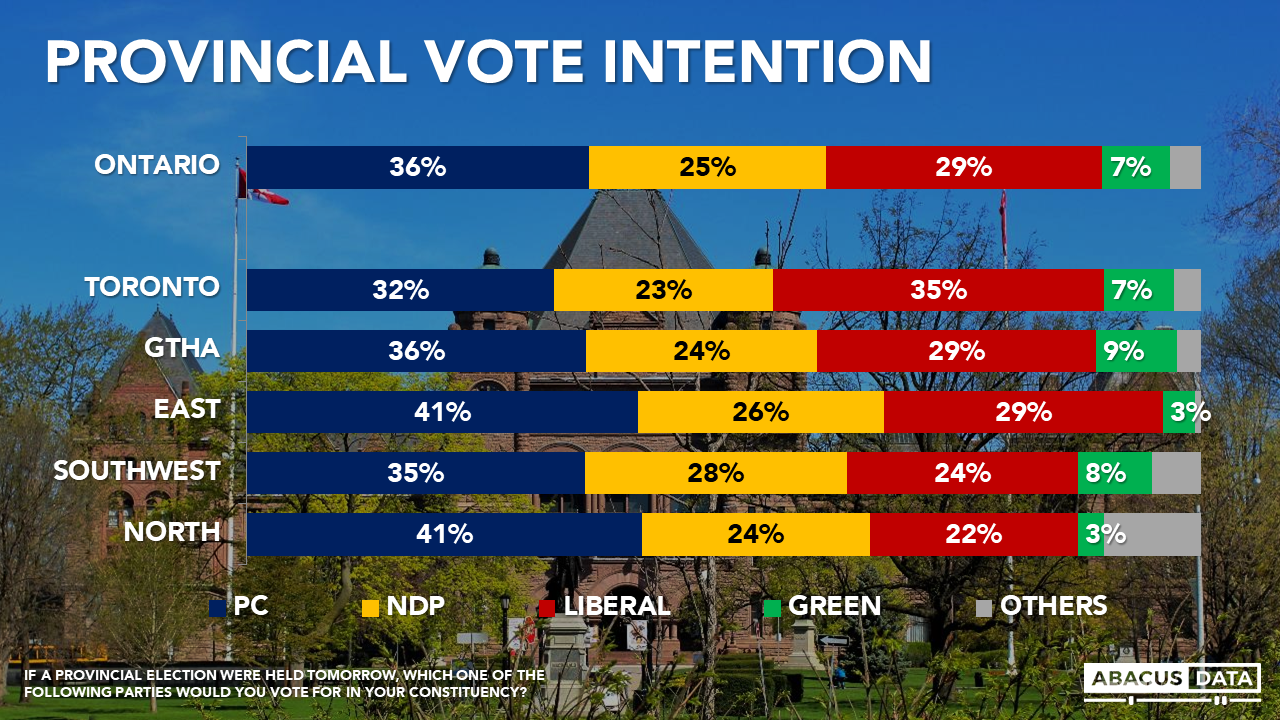 HOW SHOULD THE GOVERNMENT APPROACH THE BUDGET?

In line with the federal government’s signalling last week, most Ontarians do not want the Ford Government to turn off the taps/pullback fiscal supports for the economy and social safety net with this upcoming budget. A clear majority of Ontarians (82%), including most Ontario PC voters (72%), believe that the government needs to do what needs to be done to protect people impacted by the pandemic and public services, even if this means much larger deficits. Only 18% of voters want the government to aggressively limit the size of the deficit. 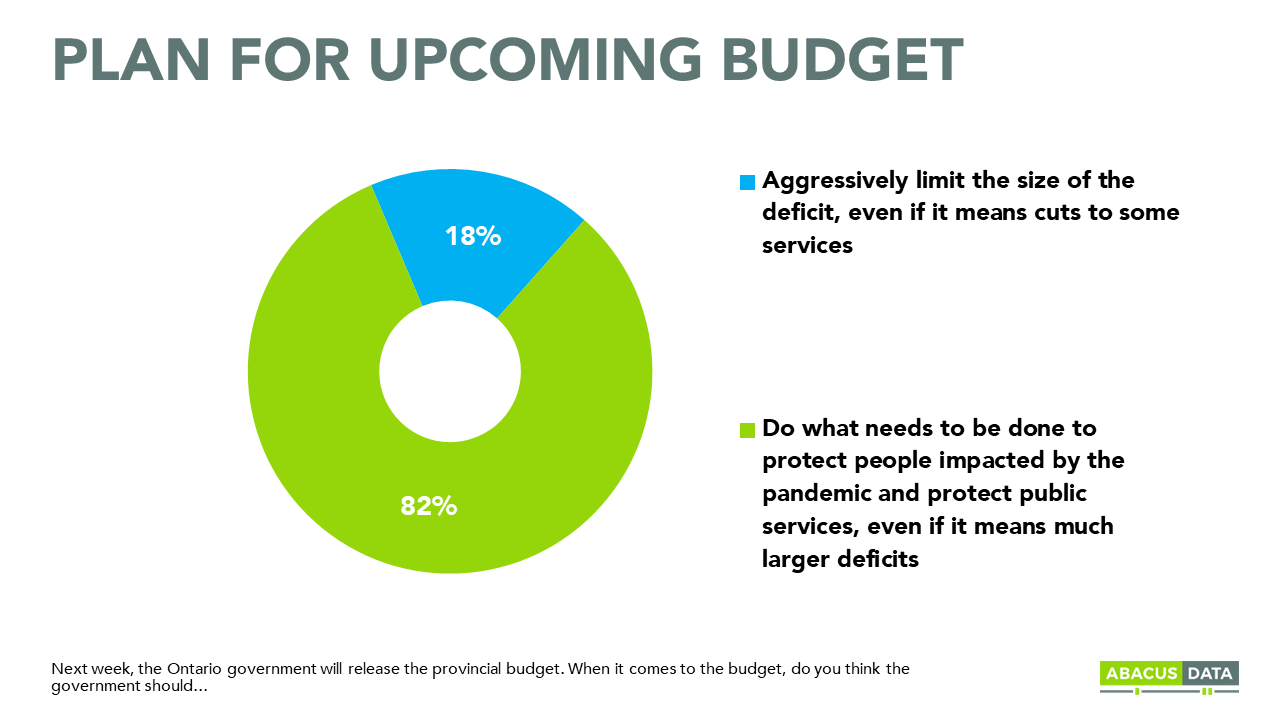 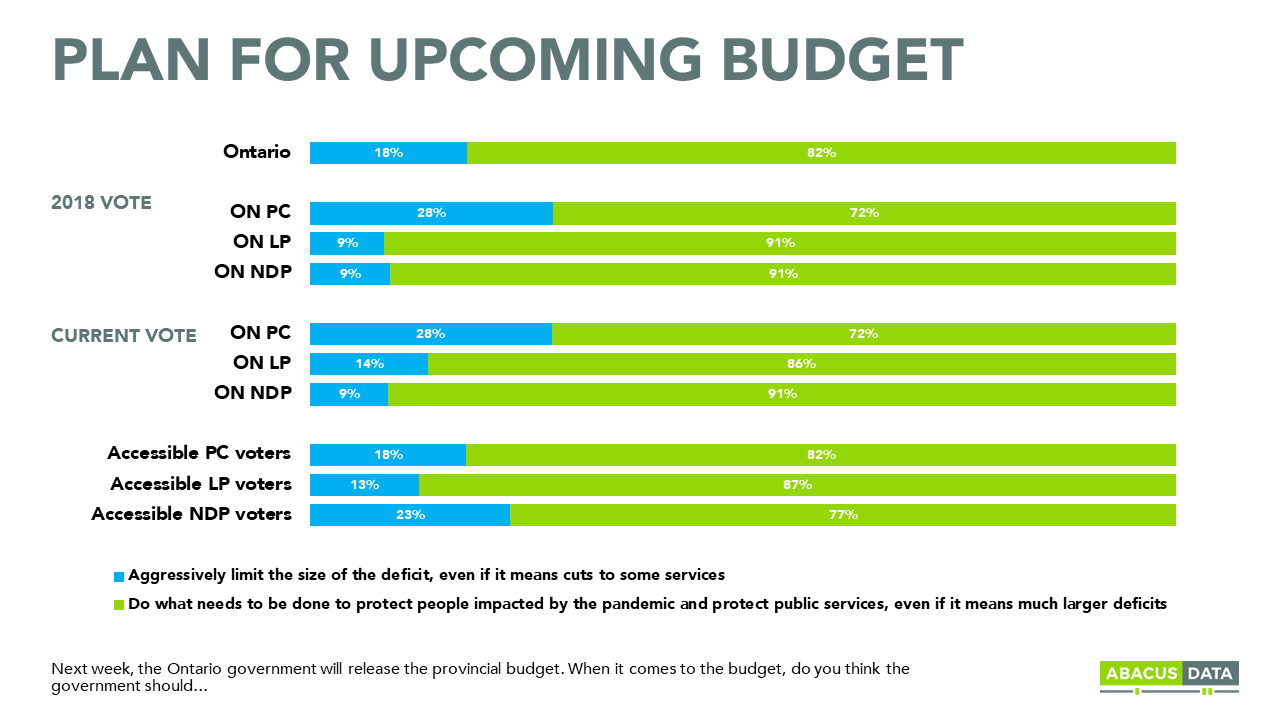 In the same vein, few have an appetite for government layoffs or cuts to employee benefits in service of deficit reduction (29%), regardless of where they sit on the political spectrum. 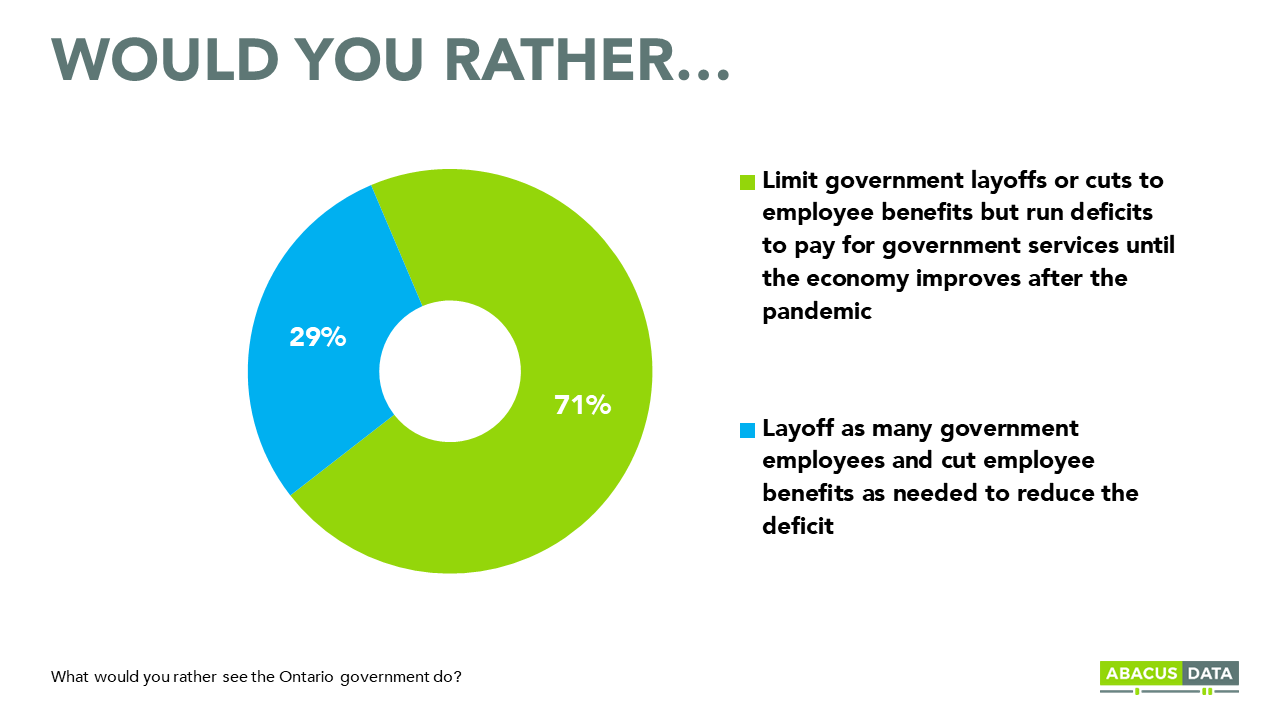 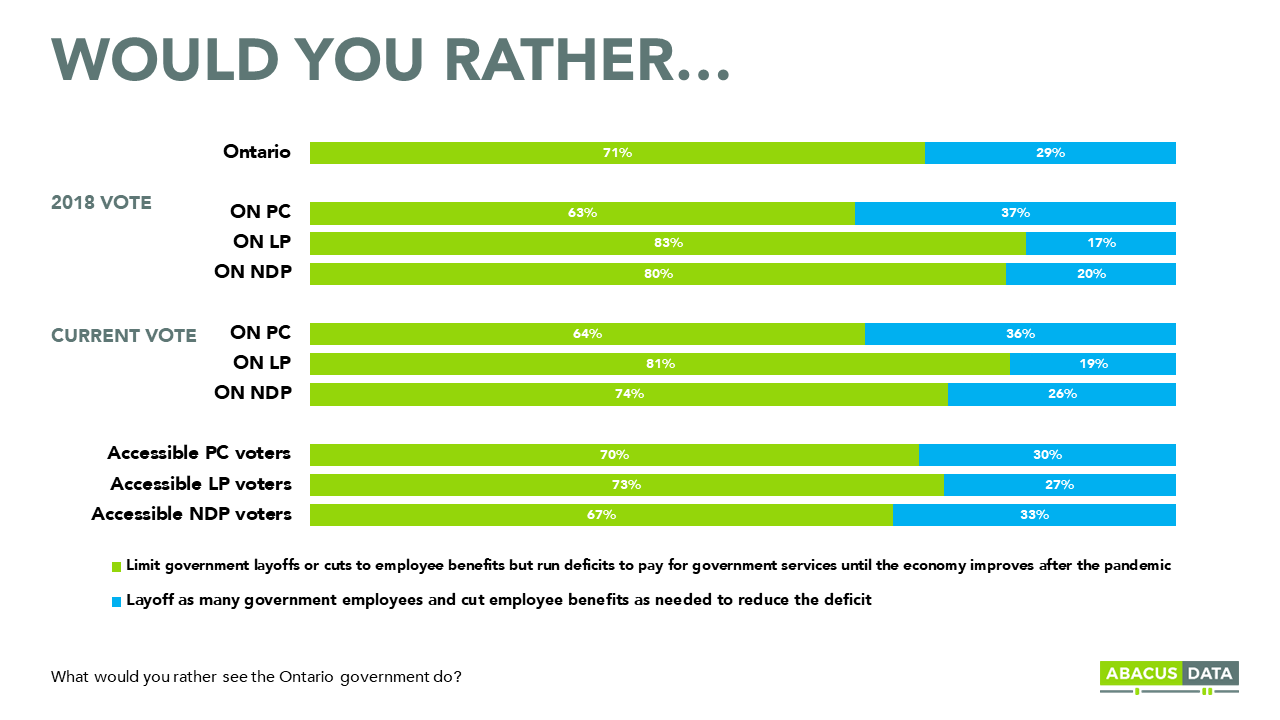 While its handling of the long-term care crisis has made its mark on the government, the provincial government’s approval rating remains in positive territory as it is set to table its first COVID budget.

This goodwill for the Premier’s handling of the crisis appears to be paying ongoing political dividends for both PC vote intention and the strength of the Premier’s personal brand. The budget this week represents an opportunity to bolster that reputation, especially as Ontarians continue to feel anxious about the pandemic and its impact on the health system and the economy. There’s little appetite for deep cuts or austerity currently. Even most PC voters think the government should continue to do what it can to help people impacted by the pandemic.

If political risks exist, it is with the opposition Liberals who have overtaken the NDP as Ontario’s most popular opposition party.  With no clear end to the pandemic in sight and a prolonged and deep economic downturn likely, the Ford government faces challenging times ahead. This offers the Ontario Liberals an opening to present a safe option if Ontarians turn on the government and seek to coalesce around an alternative.

The survey was conducted with 1,000 Ontario residents from October 28th to 30th, 2020. A random sample of panelists were invited to complete the survey from a set of partner panels based on the Lucid exchange platform. These partners are typically double opt-in survey panels, blended to manage out potential skews in the data from a single source.