Our latest national polling data shows that an election held today would see the Liberals with 34% support (up two since from last month), the Conservatives at 30% (down 1), the NDP at 18% (unchanged) and the Greens at 7% (unchanged). 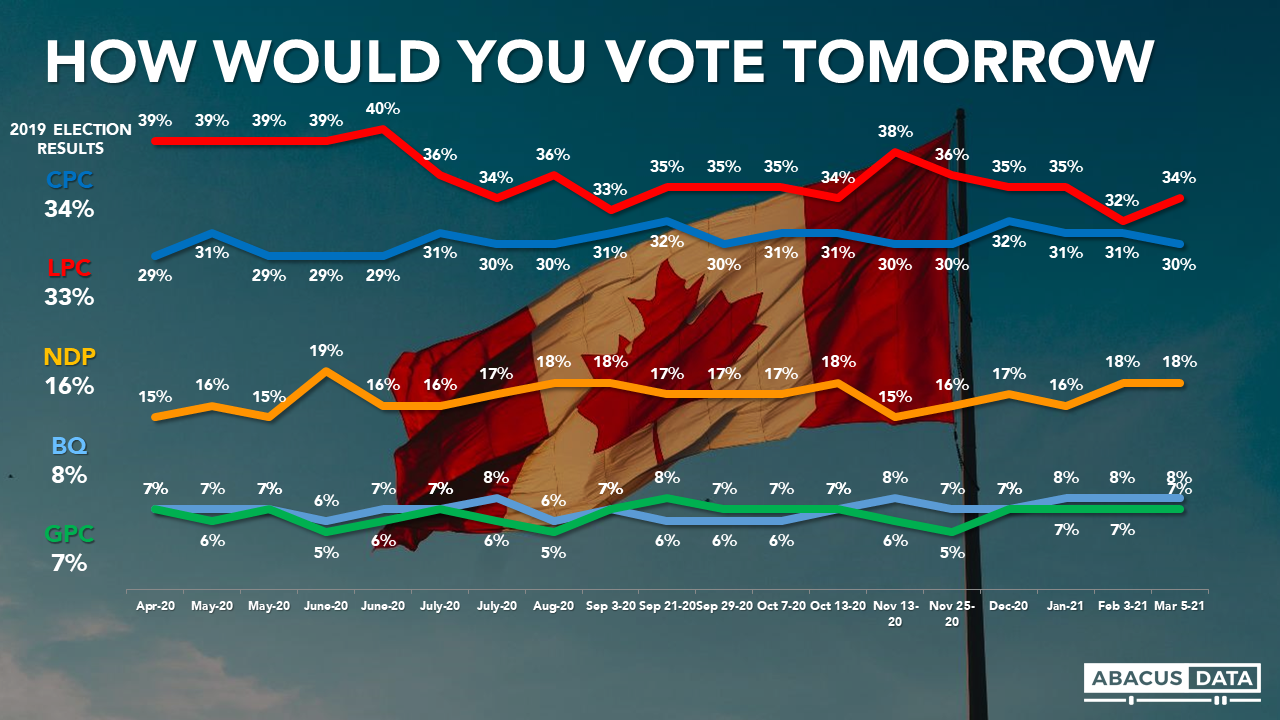 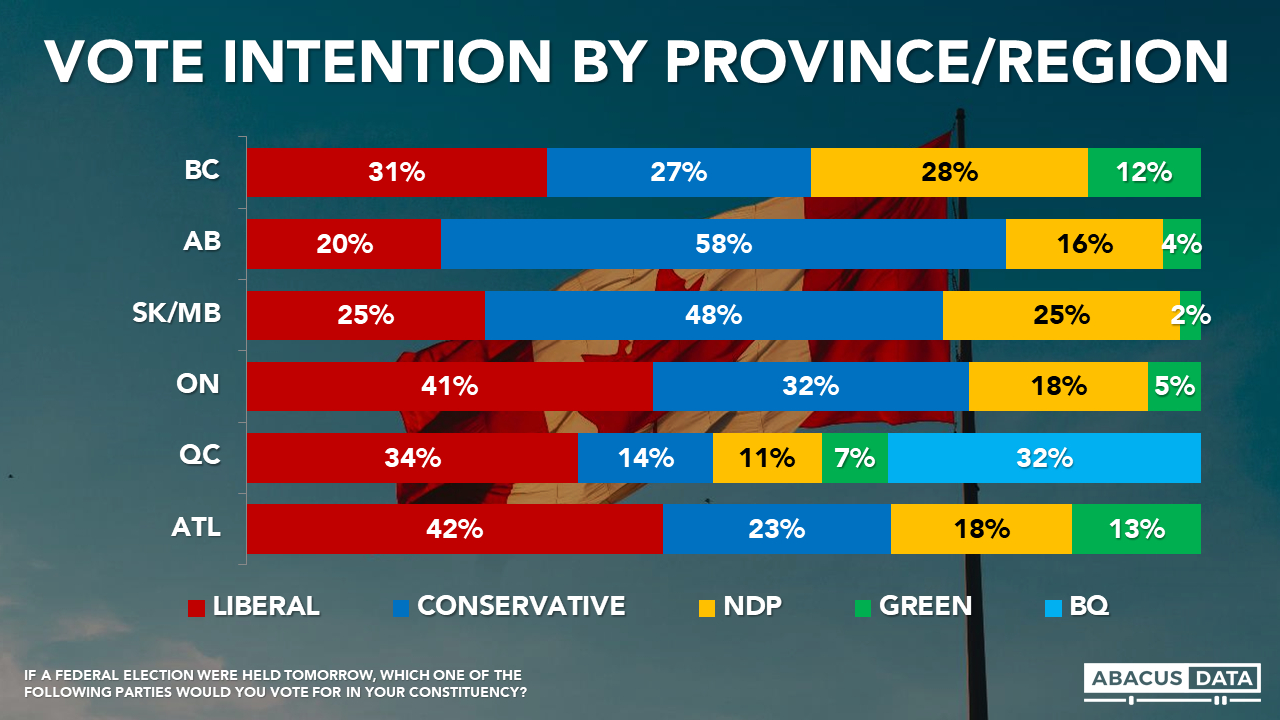 The federal government’s approval rating trended downward at the end of 2020 and into early 2021 but has stabilized with equal numbers approving and disapproving of the government’s overall performance. 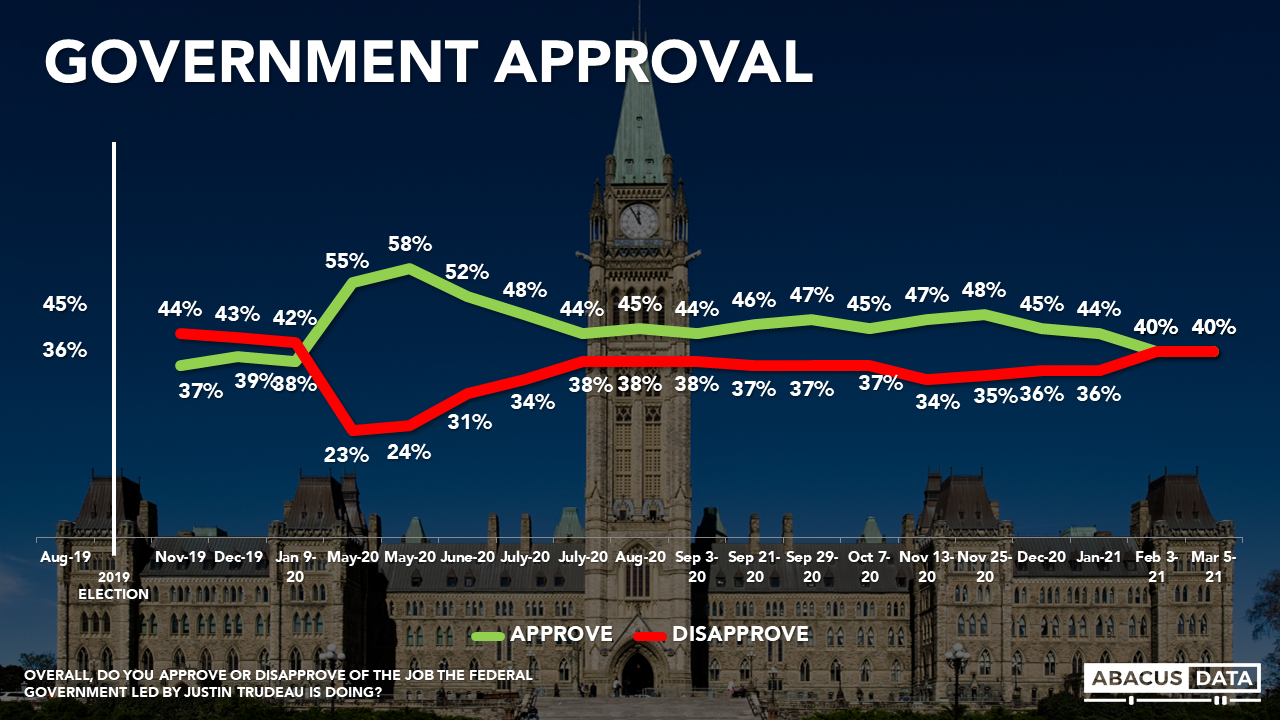 Given that we may see a federal election called in 2021, we gauged the electorate’s desire for change (a question we have asked in past pre-election and election periods). Today, 39% say it’s definitely time for a change in government, while 17% say it’s definitely best to keep the Liberals in office. The remaining respondents are split between either wanting change or keeping the Liberals in office but not feeling strongly about that opinion.

The desire for change today is substantially lower than it was in 2019.

In the run-up to and at the end of the 2019 election, just over 50% of voters felt it was definitely time for a change; today, that number is 39% 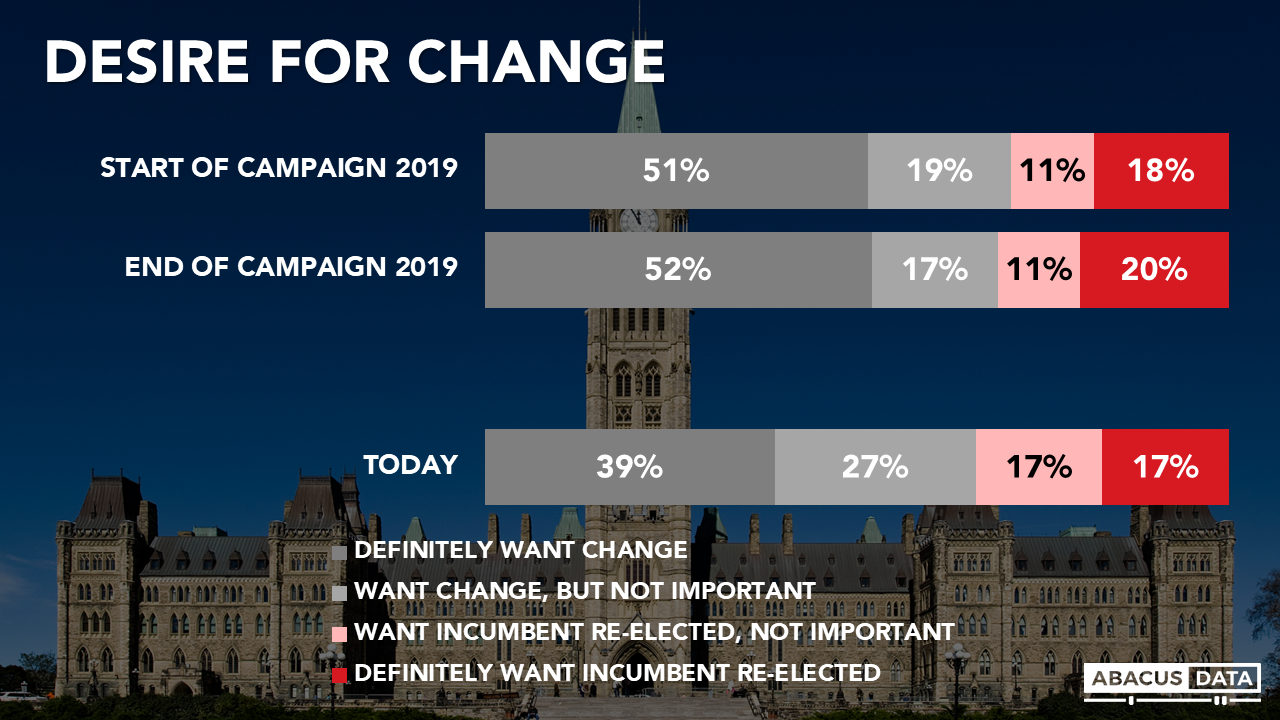 Impressions of Prime Minister Trudeau have held steady from last month. 37% have a positive impression while 40% have a negative view. For comparison purposes, in the final days of the 2019 campaign, 38% had a positive view while 45% had a negative view of the Liberal leader. 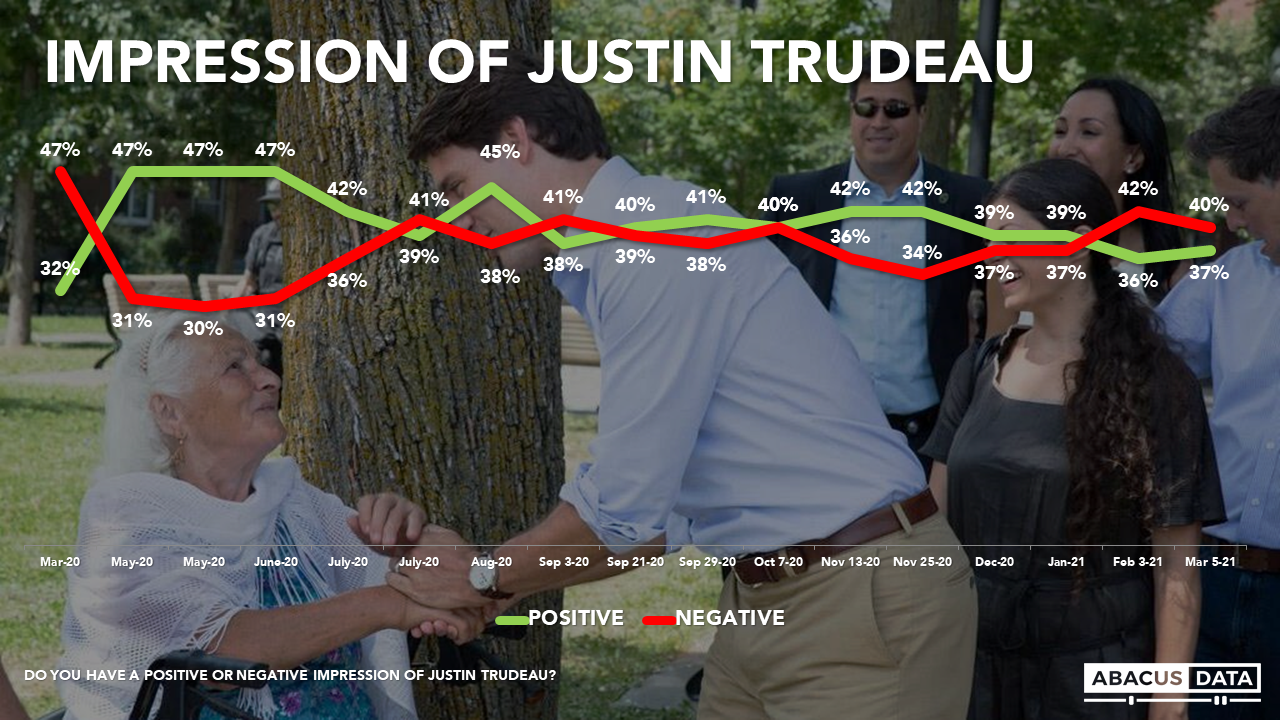 Conservative Leader Erin O’Toole sees his negatives rising for the 4th straight wave in our research. Today, 32% have a negative view of him, while 20% view him positively. This is the highest negative we’ve measured for Mr. O’Toole since we started tracking his public image. 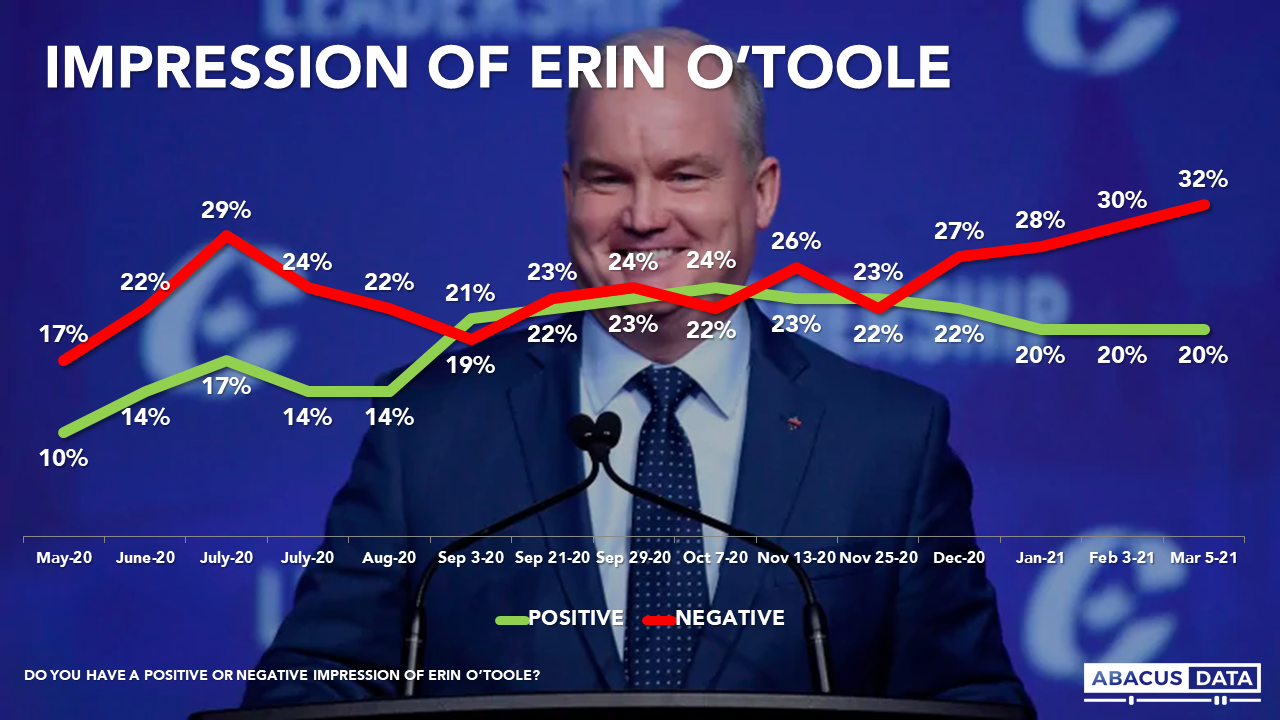 For Mr. Singh, impressions of him have remained relatively consistent over time. One in three Canadians has a positive view of the NDP leader compared with 25% who view him negatively, mostly unchanged since last month. 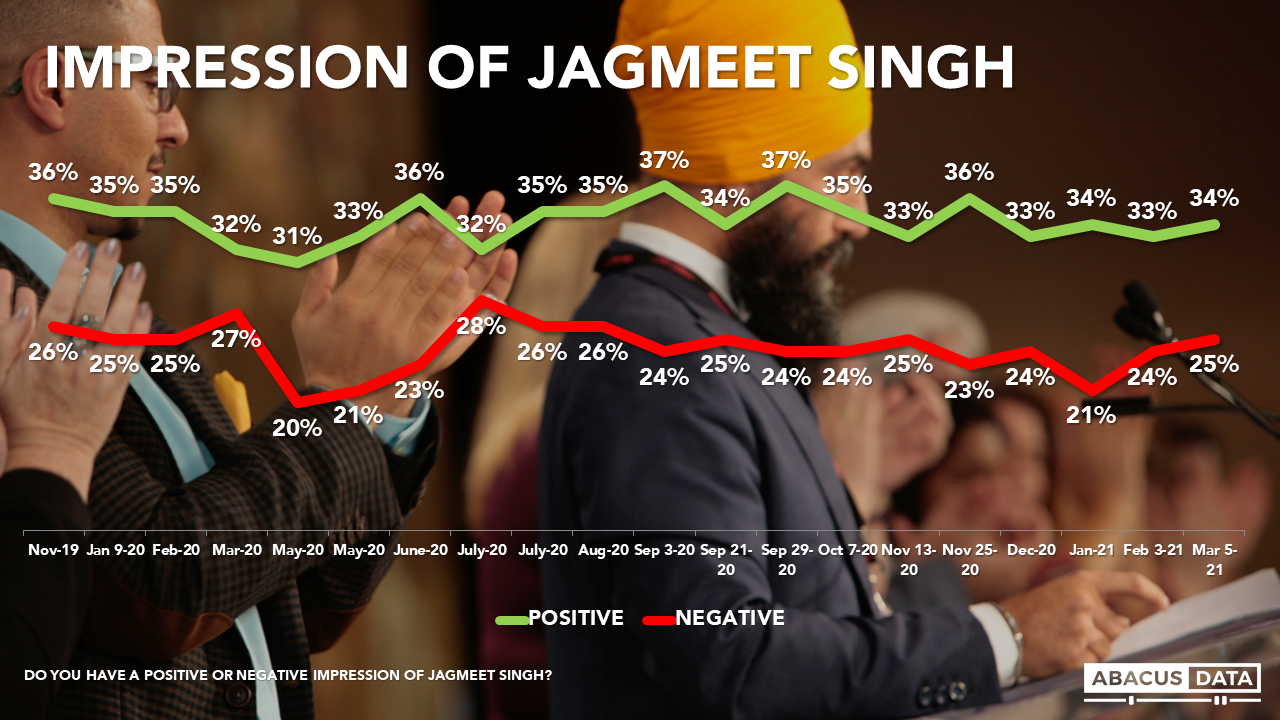 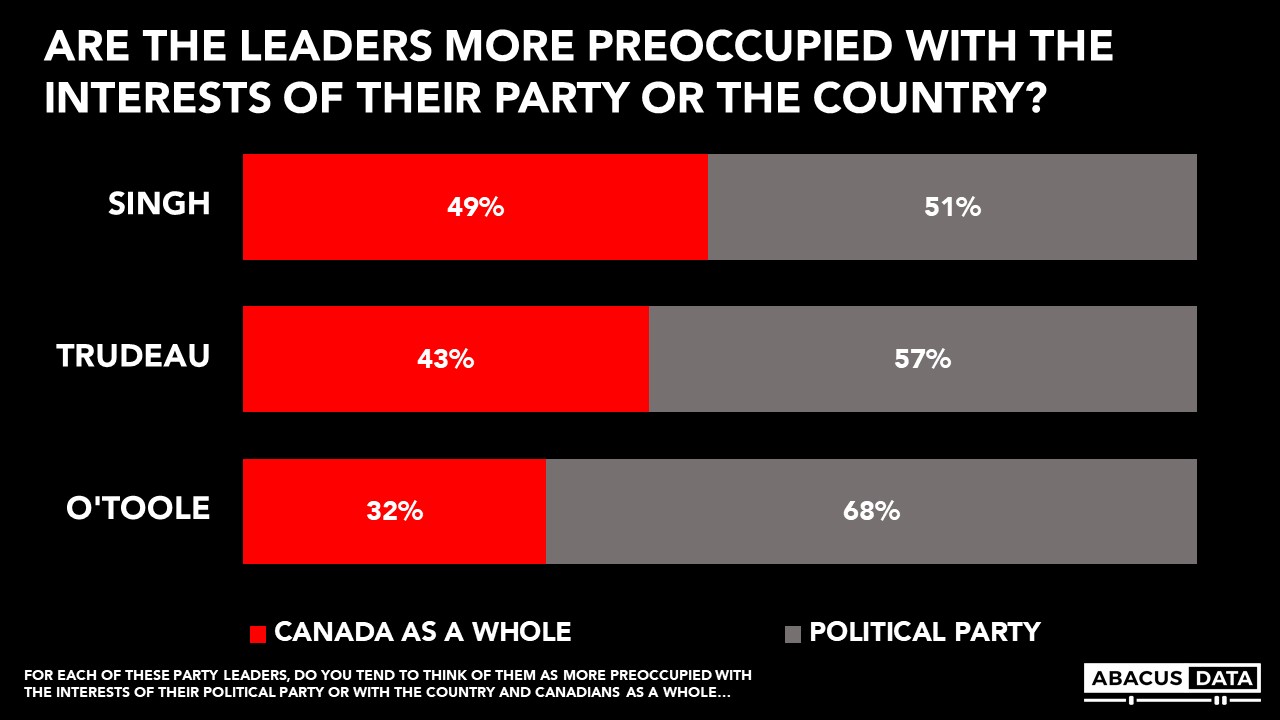 The perceived level of partisanship for Mr. O’Toole is more problematic because of its impact on accessible Conservative voters. Among Liberal and NDP accessible voters, clear majorities feel those leaders are more preoccupied with the country rather than their party. Less than a majority of those open to voting Conservative feel that way about Mr. O’Toole. 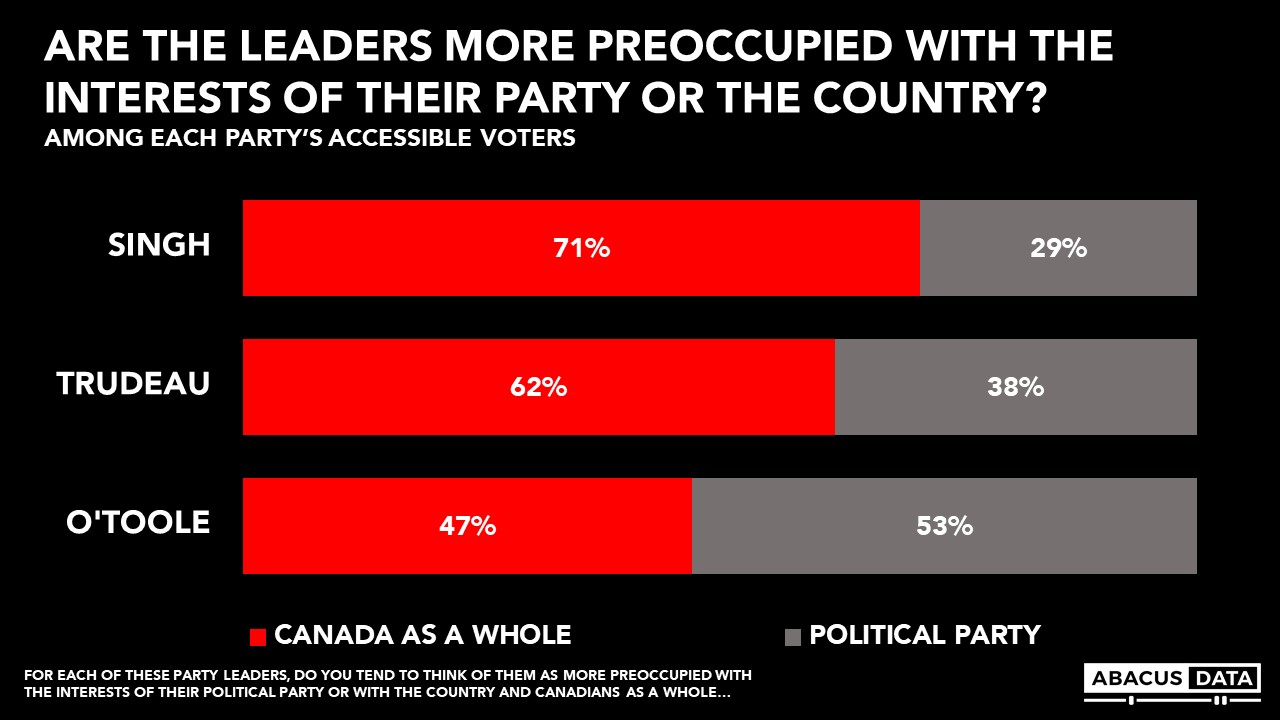 Our survey also asked respondents to rate the federal government’s performance on a series of COVID-19 related areas. We have asked many of the same questions since January. 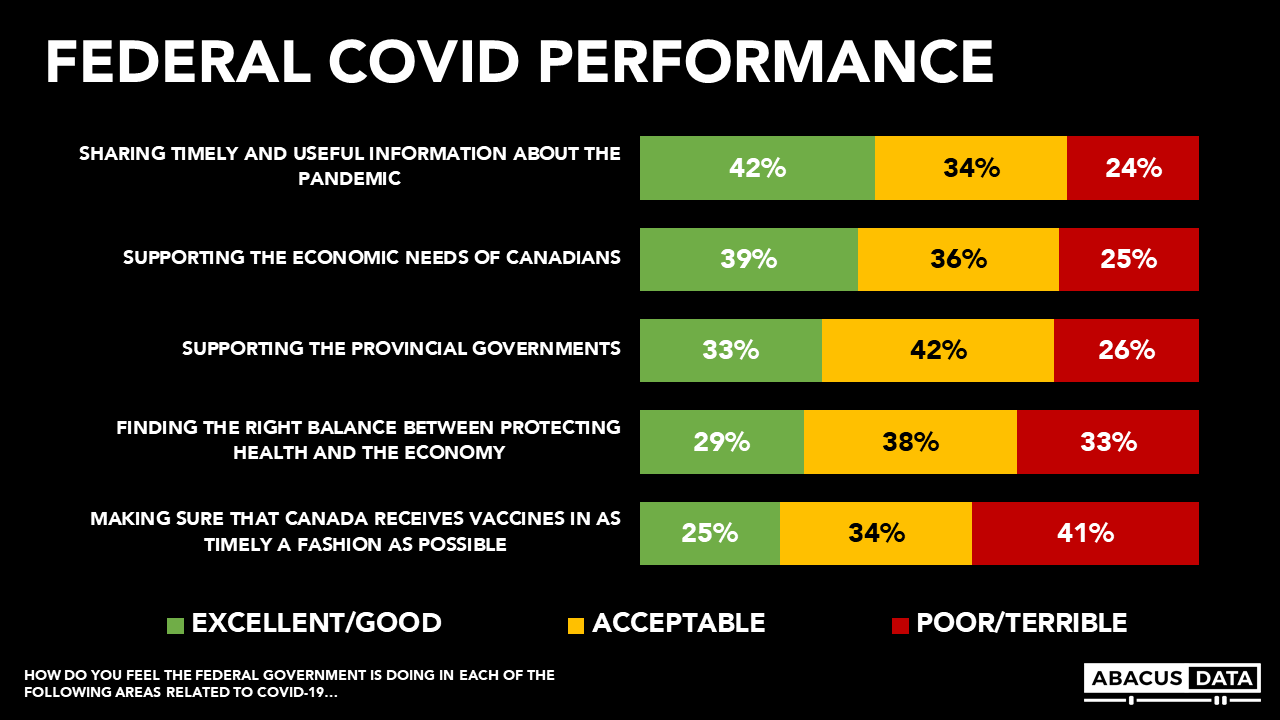 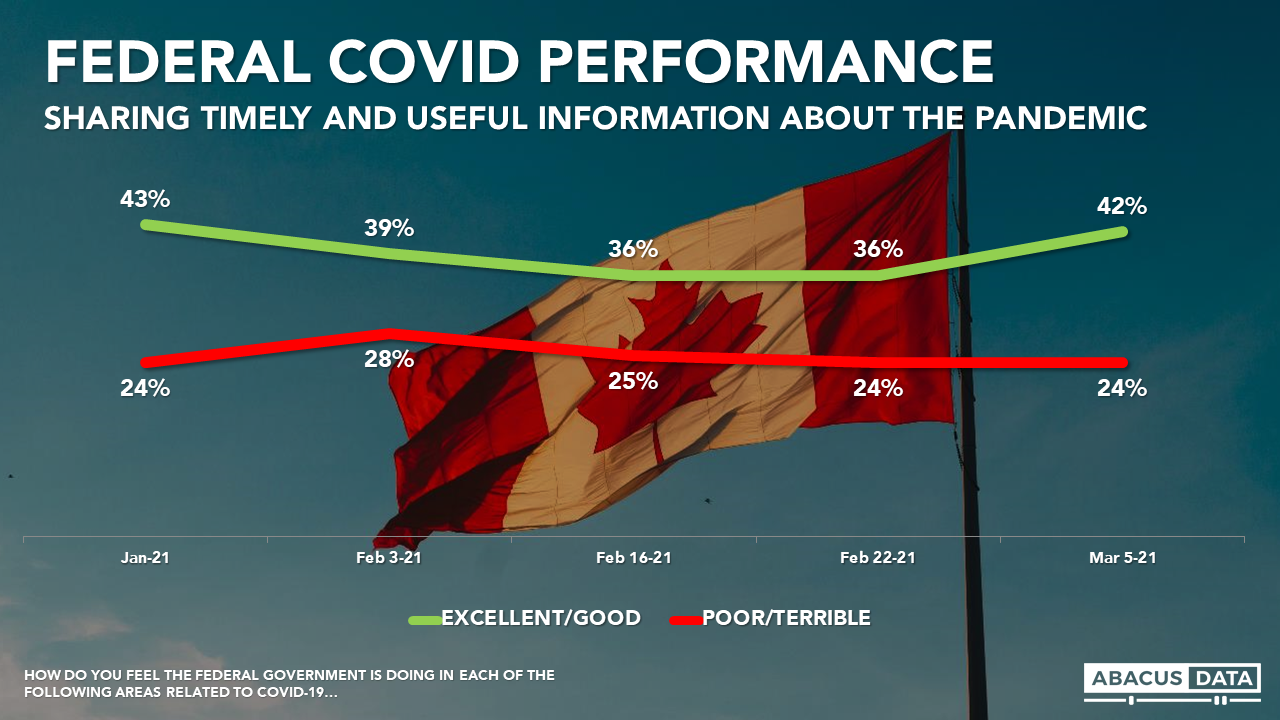 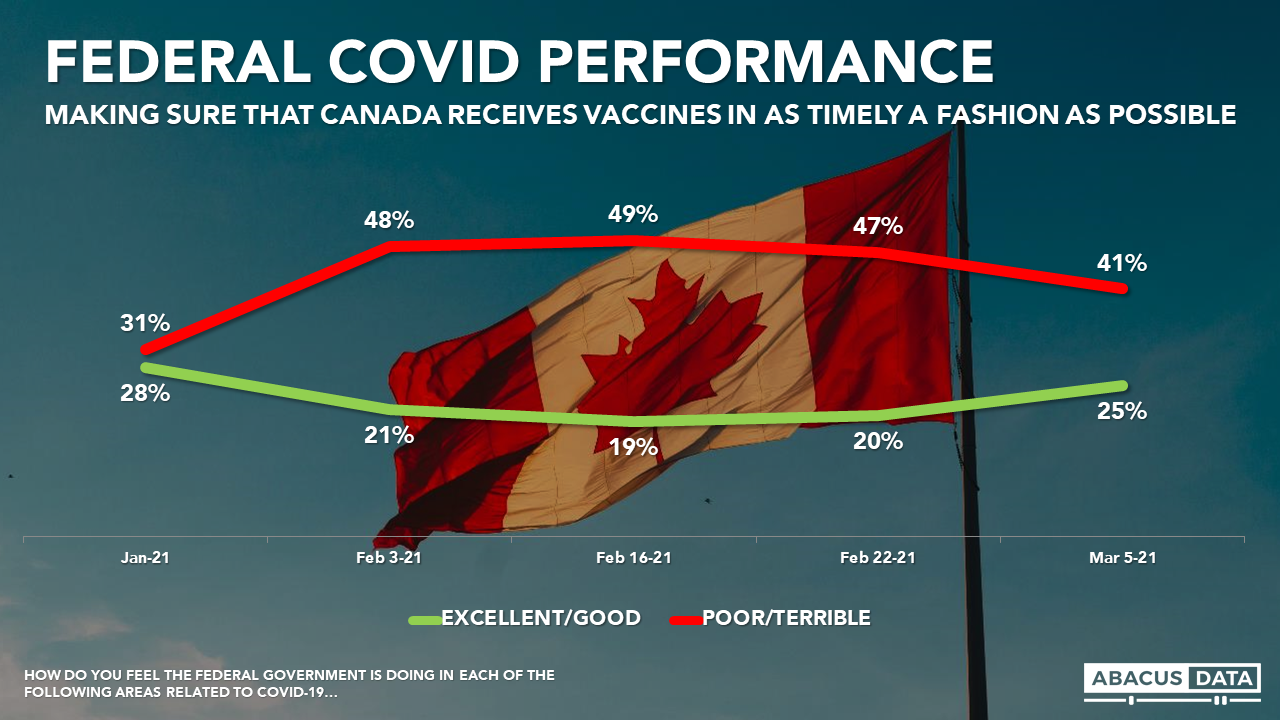 Finally, the overall mood of Canadians has improved over the last few weeks. More today feel the country is headed in the right direction than did since October. Moreover, optimism about the direction of the United States and the world is at the highest points in over a year of tracking. 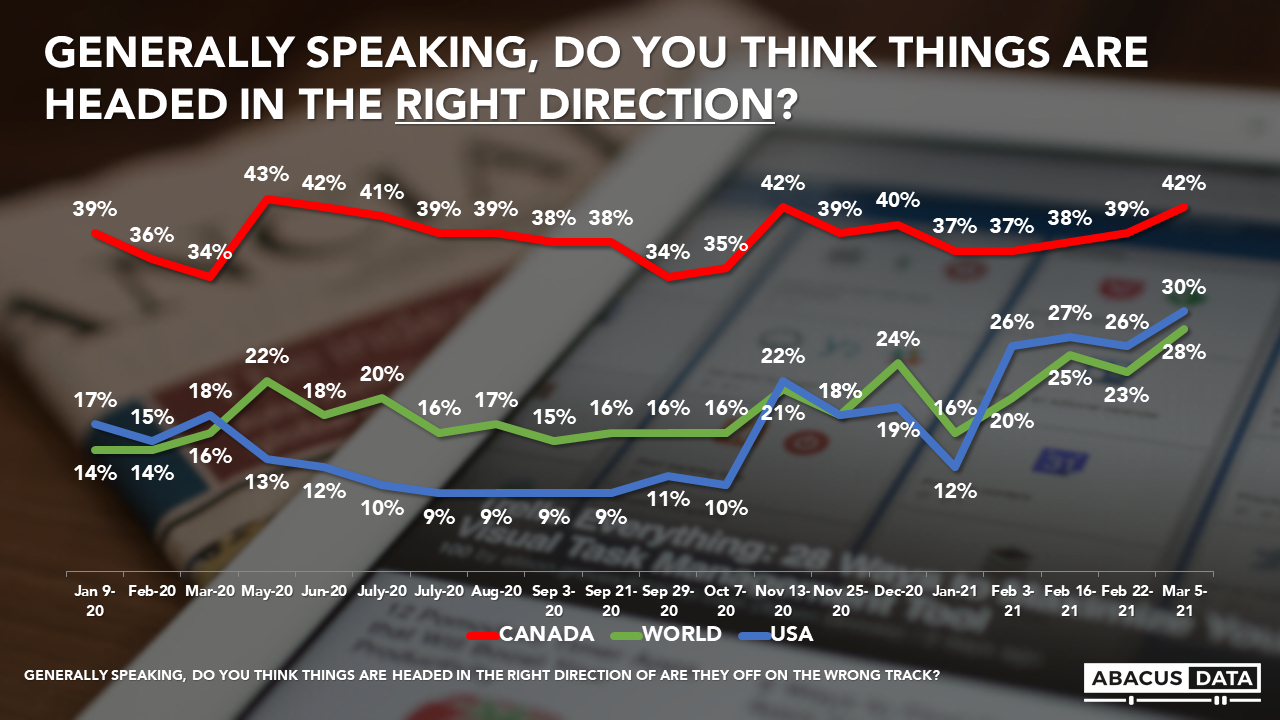 According to Bruce Anderson: “There is a tentative quality to public opinion, not surprising given the dramatic headwinds of the last year. Having said that, this survey is indicating a modest improvement in public mood – and Friday’s announcements about accelerating vaccines might only serve to add to the trend these numbers signal. One of the major lessons emerging from the pandemic is that the public doesn’t much like partisanship at the best of times, but really dislikes it in the worst of times. Mr. O’Toole seems to have figured out how to be noticed – which is one of the big challenges for any opposition leader – but he’s being noticed for taking positions with are grating on many people, because he focuses on his desire to win an election when most other people are clearly not interested in that conversation”.

According to David Coletto: “The political environment for the governing Liberals has improved since our last report in early February. The Liberals have regained a clear lead over the Conservatives. Impressions of the government’s handling of the pandemic, especially vaccine procurement, are improving, and the desire for change is considerably lower than it was at the start and end of the 2019 election campaign.

As the Conservative Party rolls out an ad campaign to introduce its leader to Canadians, these numbers reiterate the challenge facing Mr. O’Toole: his negatives continue to rise, more think he’s focused more on the interests of his party than the country, and the desire for change is doing little to push his party’s support up.”

The survey was conducted with 2,000 Canadian adults from March 2 to 5, 2021. A random sample of panelists were invited to complete the survey from a set of partner panels based on the Lucid exchange platform. These partners are typically double opt-in survey panels, blended to manage out potential skews in the data from a single source. 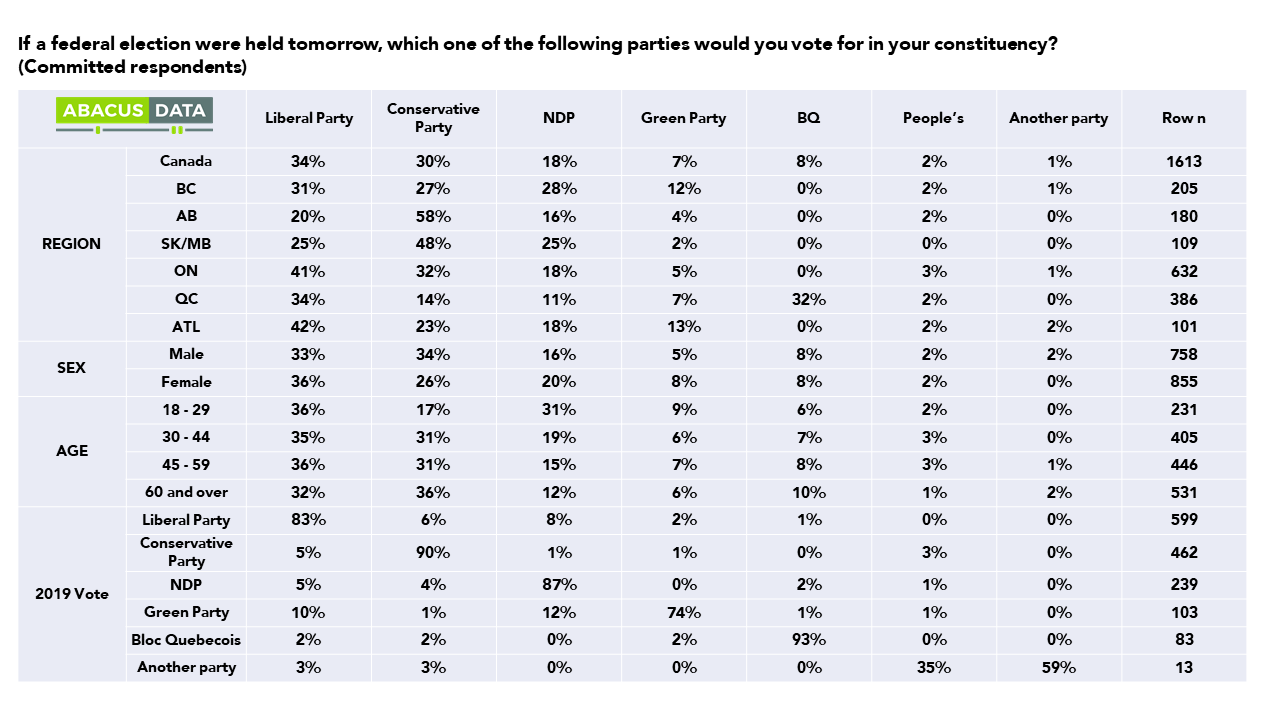 How are Canadians celebrating (or not) Christmas this year?
Canadians want a recovery that is ambitious, fair, and makes the country more self-sufficient.
Tory support plummets after rocky spring: Survey
Tags: Canadian politicsCOVID-19Erin O'TooleJagmeet SinghJustin Trudeau