We just completed a national survey of 2,000 Canadian adults (from March 25 to 30). Here’s what the survey found: 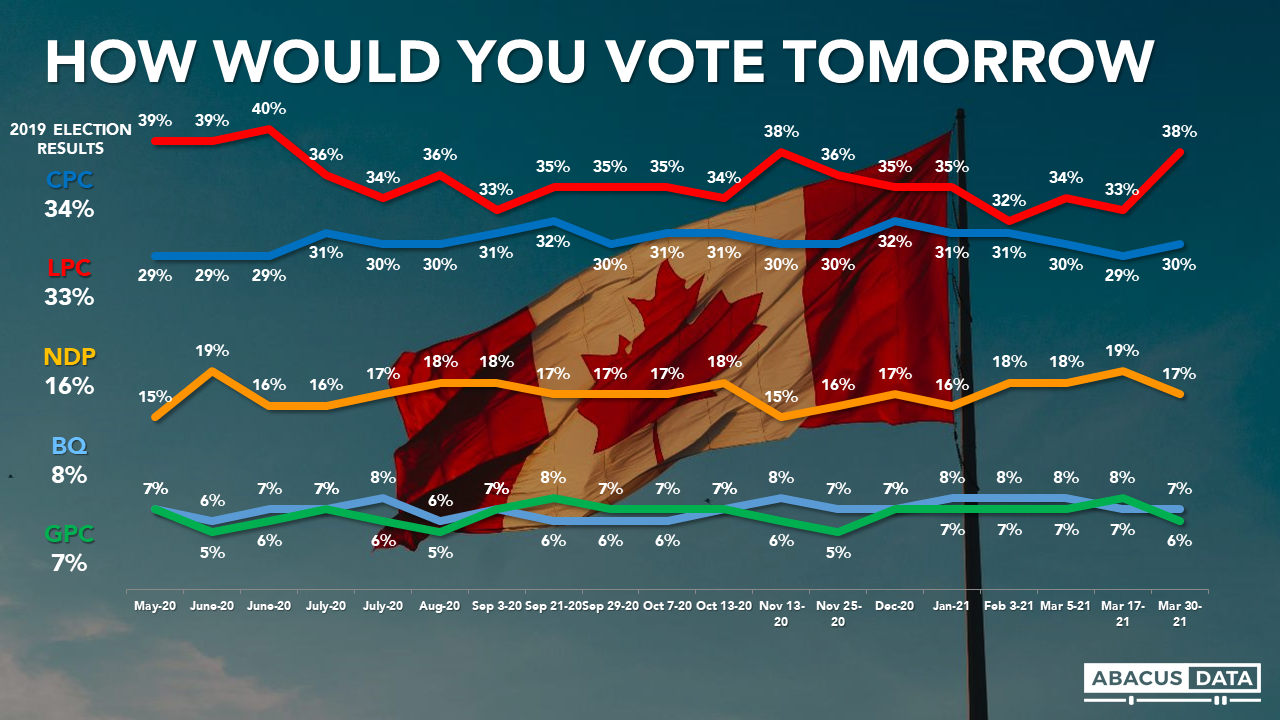 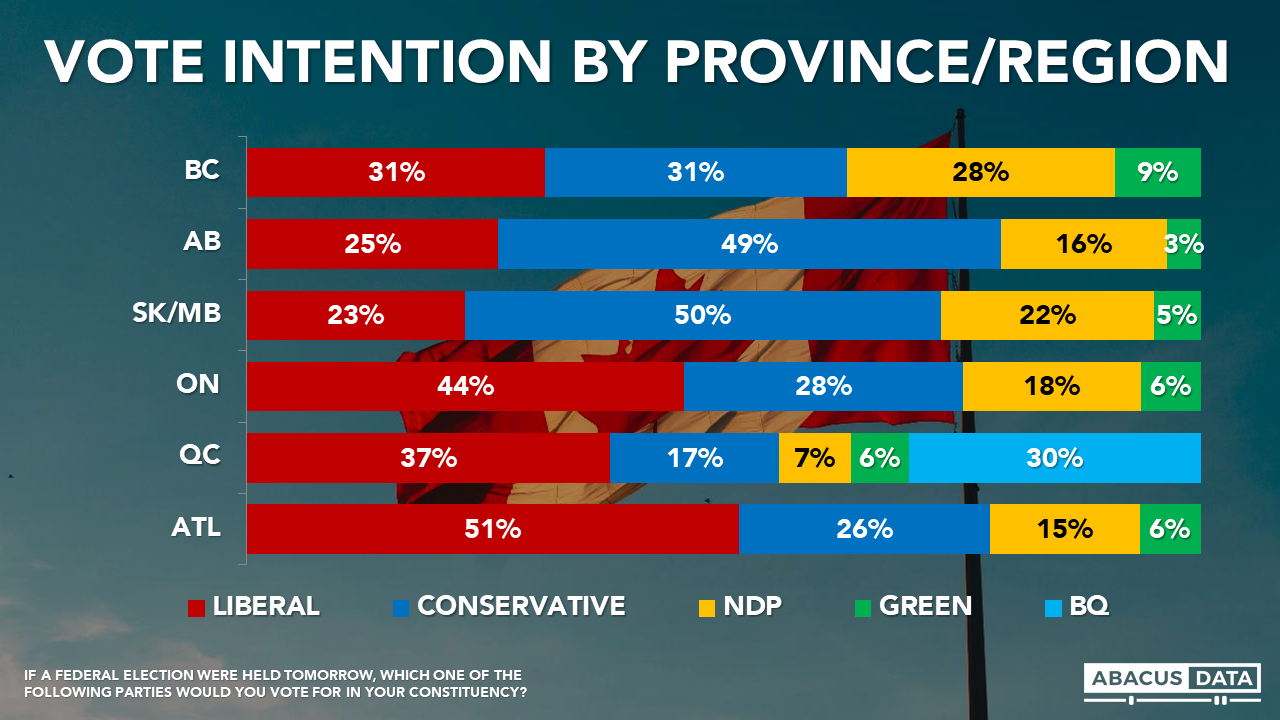 Erin O’Toole enjoys a positive impression among 19% and finds negative impressions among 33%, for a net score of -14 and the worst rating we have registered since we started tracking. His net score is -14 in BC, +8 in Alberta, -20 in Ontario, -16 in Quebec and -25 in Atlantic Canada. 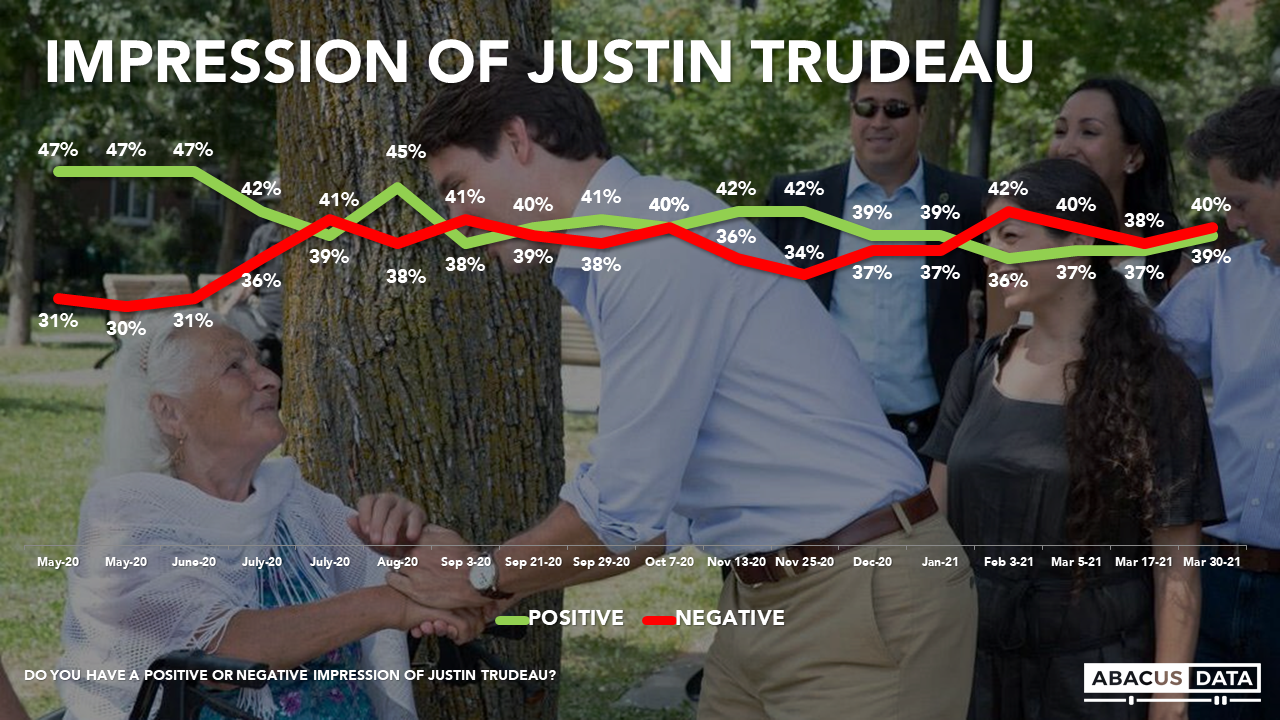 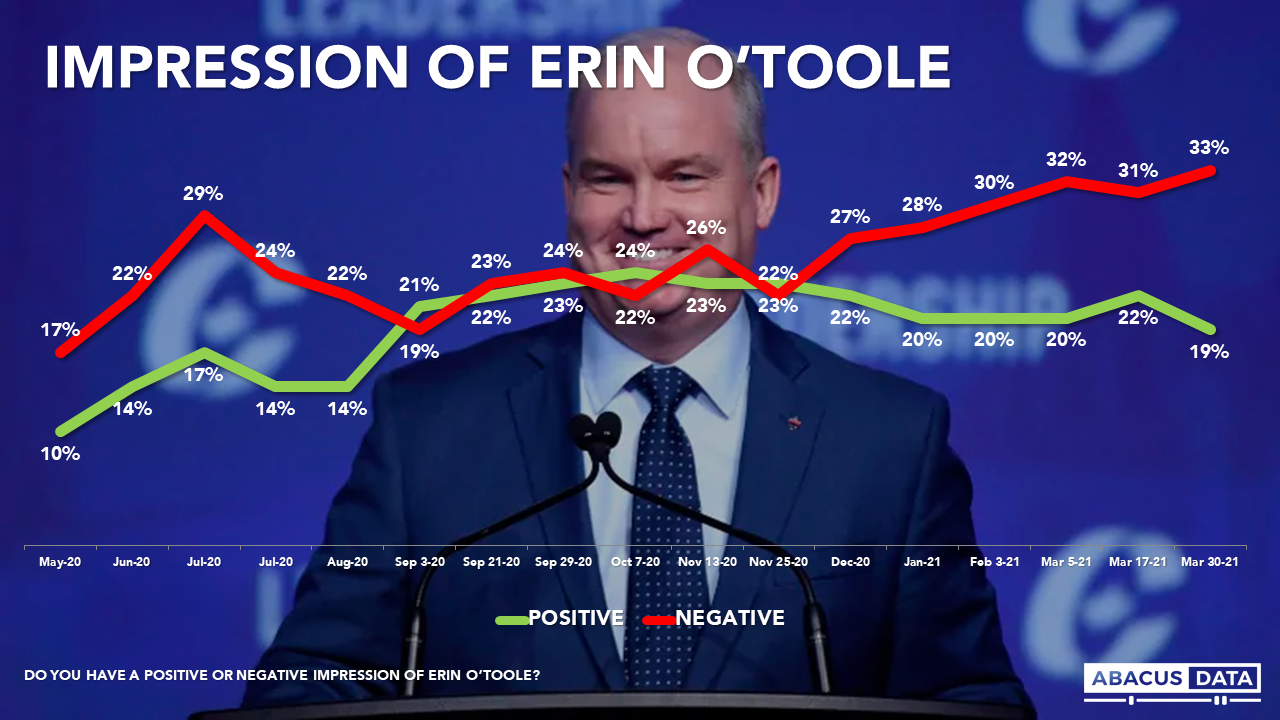 Given the rise in Mr. O’Toole’s negatives, we compared net impressions by key groups today with where his net impression was the month after he was elected Conservative Party leader. The most noteworthy swings have been in Ontario (-2 to -20), BC (+1 to -16), and among those 45 and older (from +6 to -16). Mr. O’Toole has lost popularity among those who self-identify as being on the left (a 15 point drop), centre (an 11 point drop), and right (14 point drop) of the spectrum. 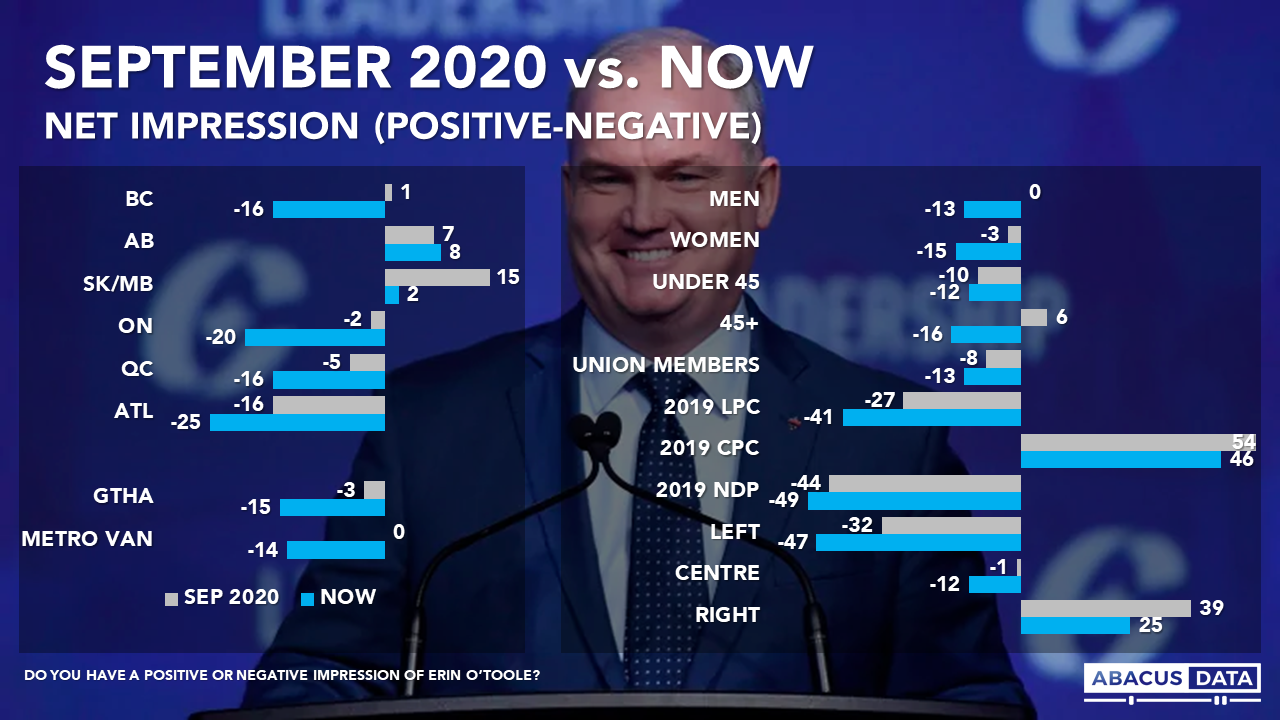 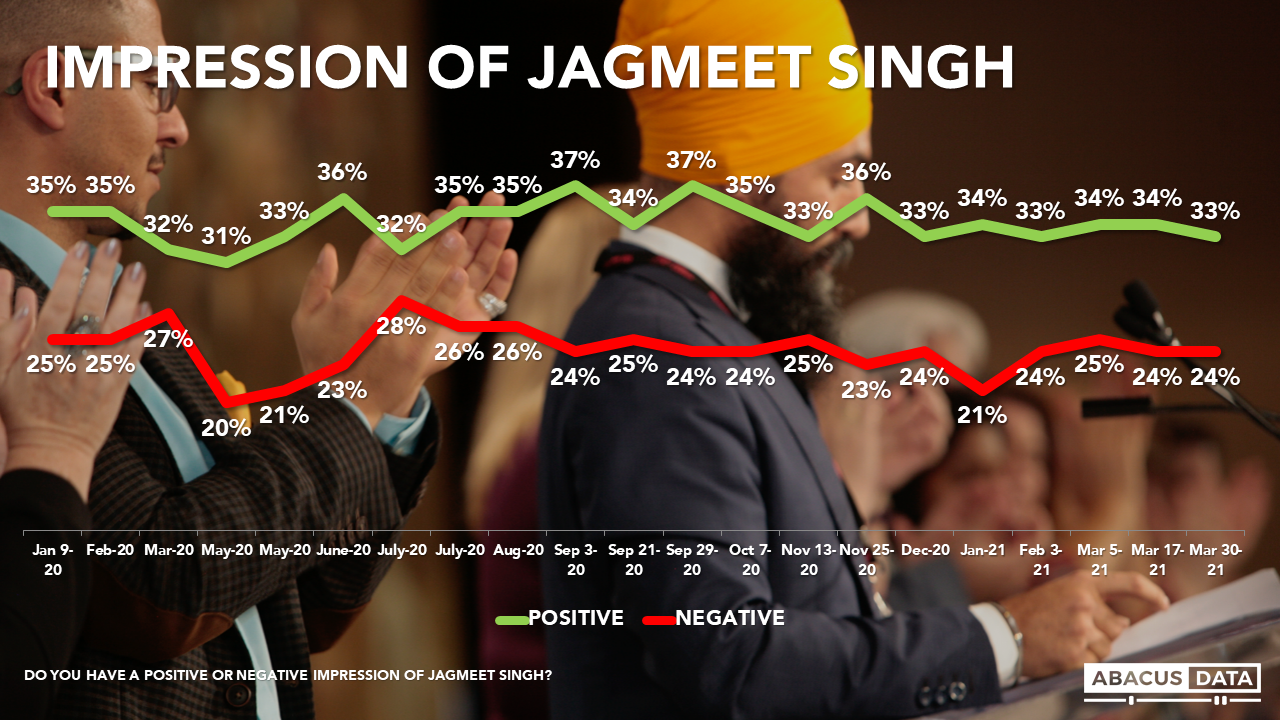 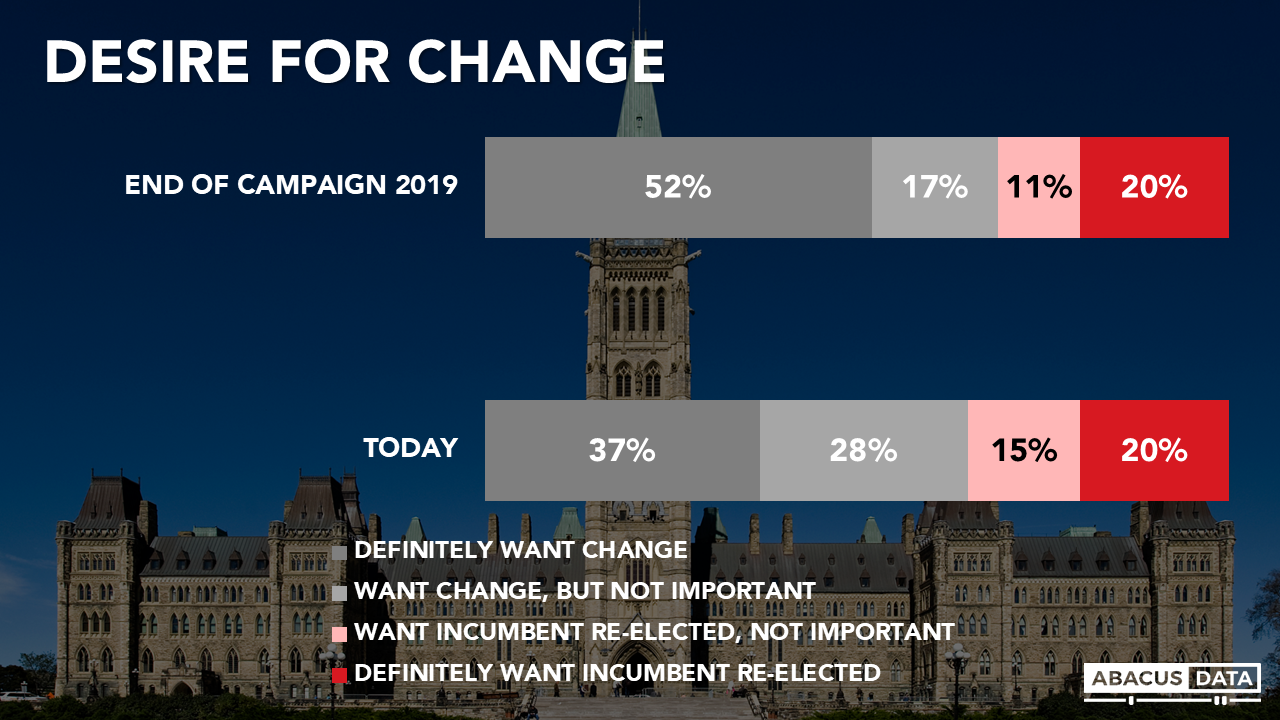 FEELINGS ABOUT THE PANDEMIC

We find concern about the pandemic is growing again, even as vaccines arrive in larger quantities. One in three (34%) say over the past few days they have become more worried (up 9 since early March) while 17% say they are less worried (down 3). Regionally, there isn’t much variation except in Atlantic Canada where residents are less likely to report rising fear.

There also isn’t much variation by current party support. At least 30% of Liberal, Conservative, NDP, Green, and BQ supporters say they are getting more worried about the pandemic. 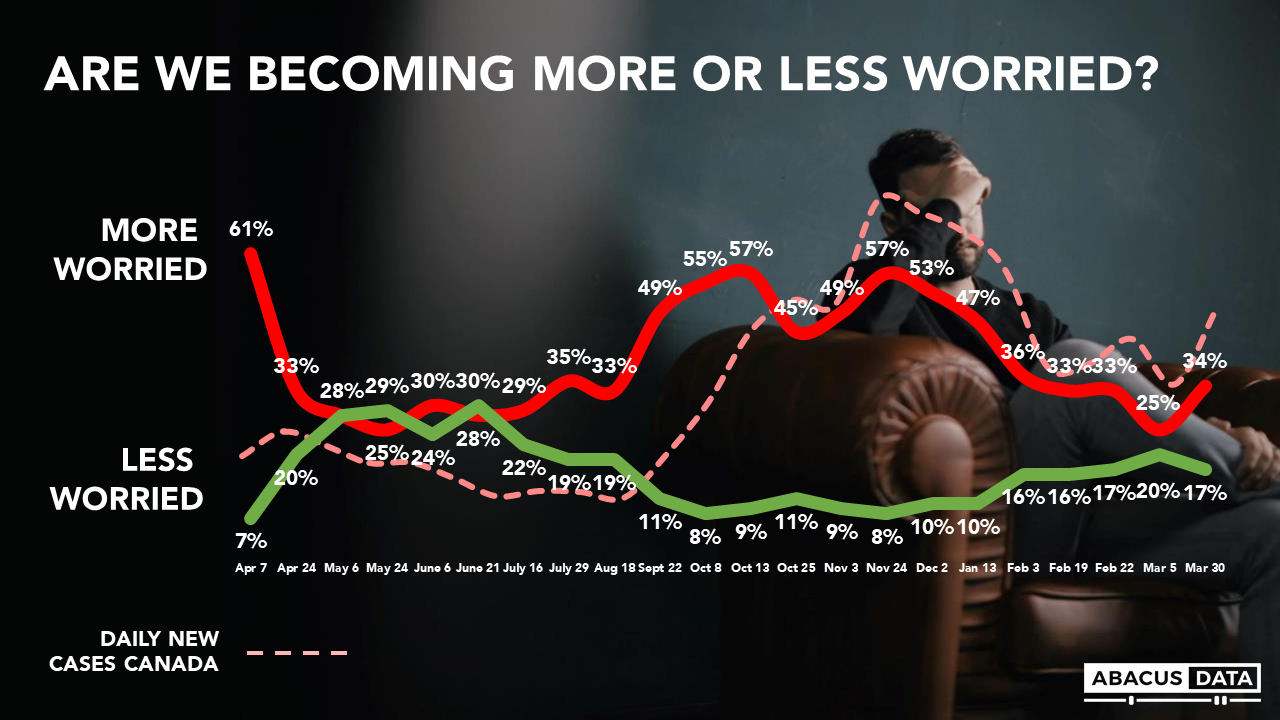 According to Bruce Anderson: “It may not be a coincidence that Liberal support is up at the same time as more vaccines are arriving in Canada – it’s too early to tell what the effect will be of this new phase of the pandemic. Having said that, it’s clear that the pandemic is the major preoccupation for people and it’s likely that more people are starting to imagine a post-pandemic reality, even if there is plenty of near-term anxiety about variants of concern.

The Conservatives might have hoped for a bounce coming out of their policy conference and instead the challenge for Erin O’Toole is probably a bit worse than it was heading into that event. There are a considerably fewer motivated Conservative voters than there were in 2019 and he personally has been losing ground across the spectrum, probably his most notable challenge being in BC and Ontario, and also among Conservatives who are less enthusiastic about him than when he was first elected as leader.

According to David Coletto: “The Liberals have opened up the largest lead since October 2020 with critical advantages in Ontario and Quebec. Erin O’Toole continues to struggle to connect with Canadians as his negatives continue to rise.

The Liberals are now the clear favourites: they have a sizeable lead in the horserace, the desire for change remains much more muted than back in 2019, and none of the opposition parties are gaining any traction.

Although the Liberals would likely win a majority if an election held today, rising anxiety about the pandemic and a third wave would make calling a spring election risky and challenging for the Liberals to navigate. For the opposition parties, there’s little here to entice them to bring down the government over the federal budget which means if the parties are basing decisions on the public mood, we won’t see an election until at least later this year.”

The survey was conducted with 2,000 Canadian adults from March 25 to 30 2021. A random sample of panelists were invited to complete the survey from a set of partner panels based on the Lucid exchange platform. These partners are typically double opt-in survey panels, blended to manage out potential skews in the data from a single source. 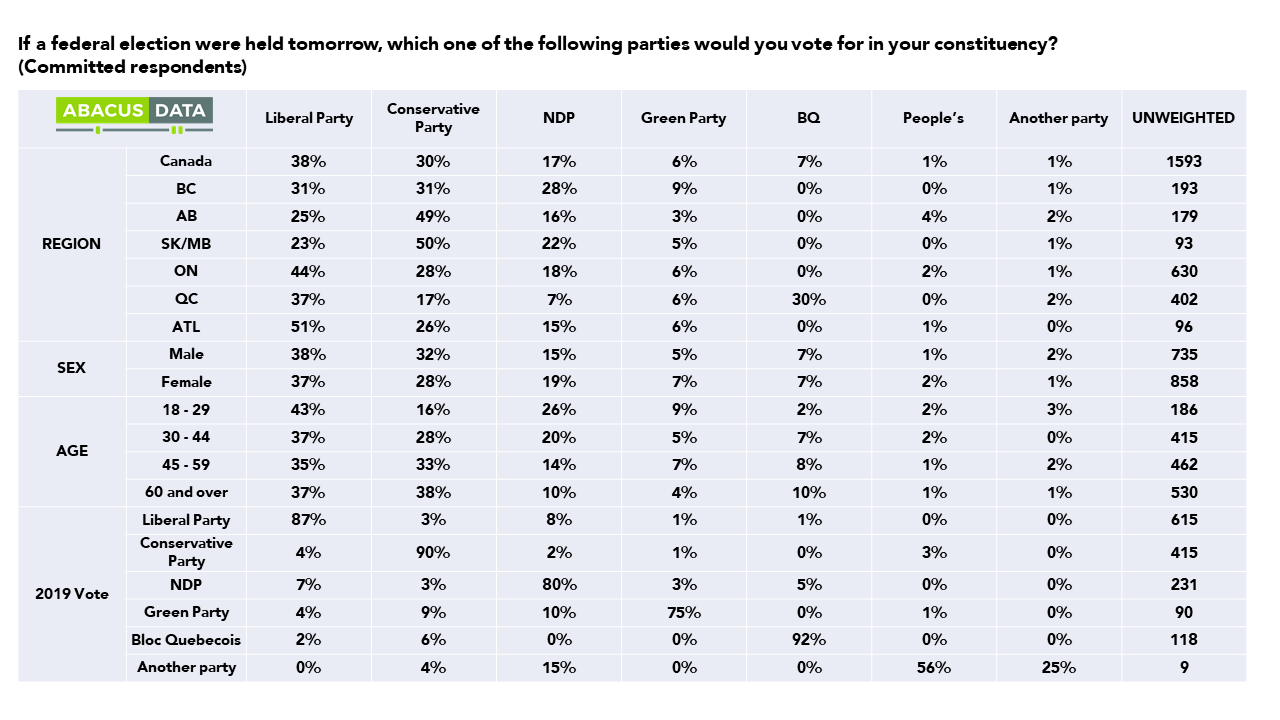