An election today would see the Liberals (33%) and Conservatives (31%) in a virtual tie in terms of national support. The NDP is further back with 18%, a level they have maintained for many months now. 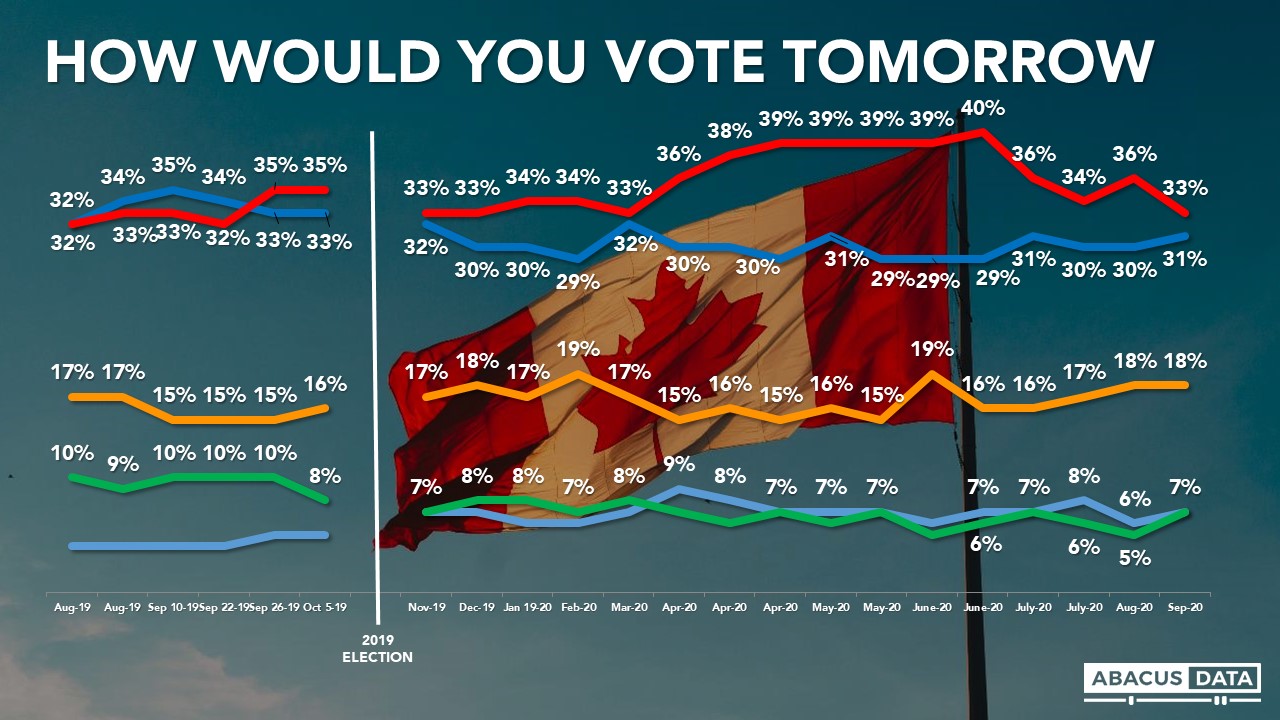 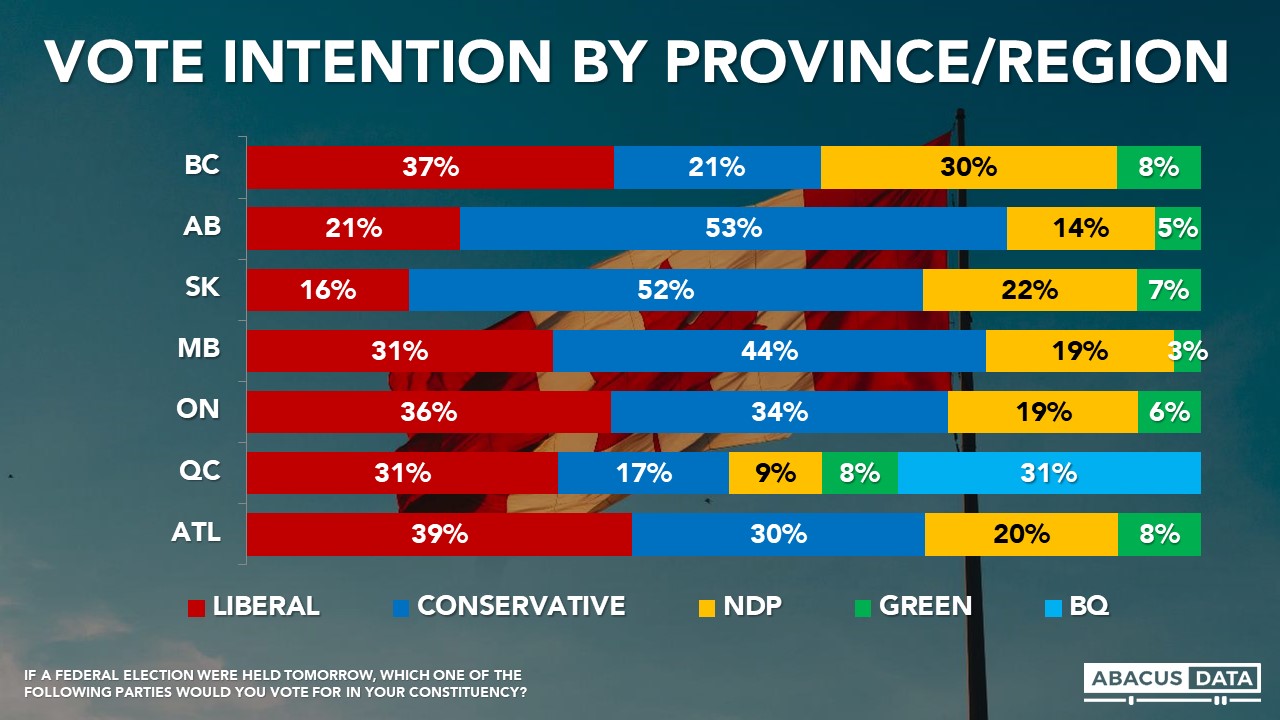 The narrowing of the gap between the two front running parties is most notable in Ontario. It coincides with the Conservatives’ selection of Erin O’Toole, an Ontario Member of Parliament, as their new leader. During the same period, we see a 7-point rise in favourable opinions of Mr. O’Toole. For the first time since we began tracking sentiment towards Mr. O’Toole, positive impressions (21%) outstrip negative (19%) views of him. In Ontario, Mr. O’Toole’s positives increased by 10-points in a few weeks, from 11% last month to 21% today, the largest shift in any region of the country. 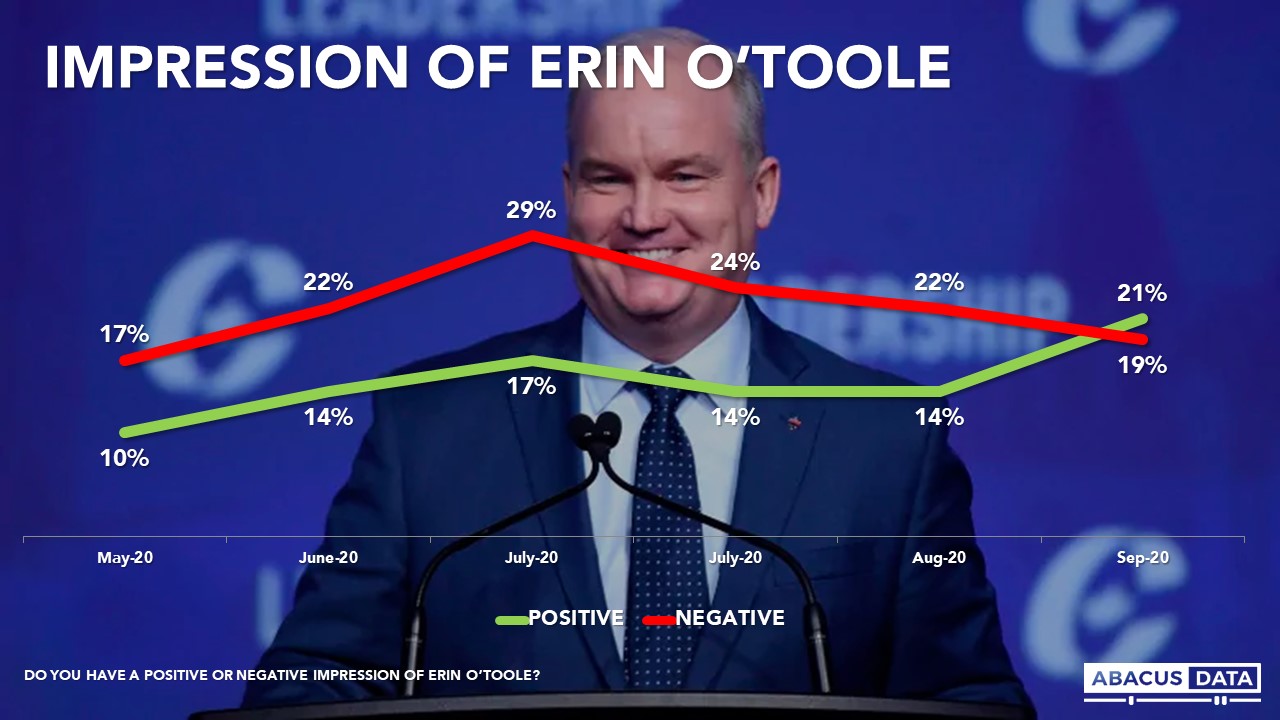 Impressions of Prime Minister Trudeau sagged during this measurement period, with positives dropping 7 points and negatives up 3. Views of NDP leader Jagmeet Singh are showing signs of improvement over time, with his positives edging upward over the summer to 37%, the highest positive number we have ever registered for Mr. Singh. 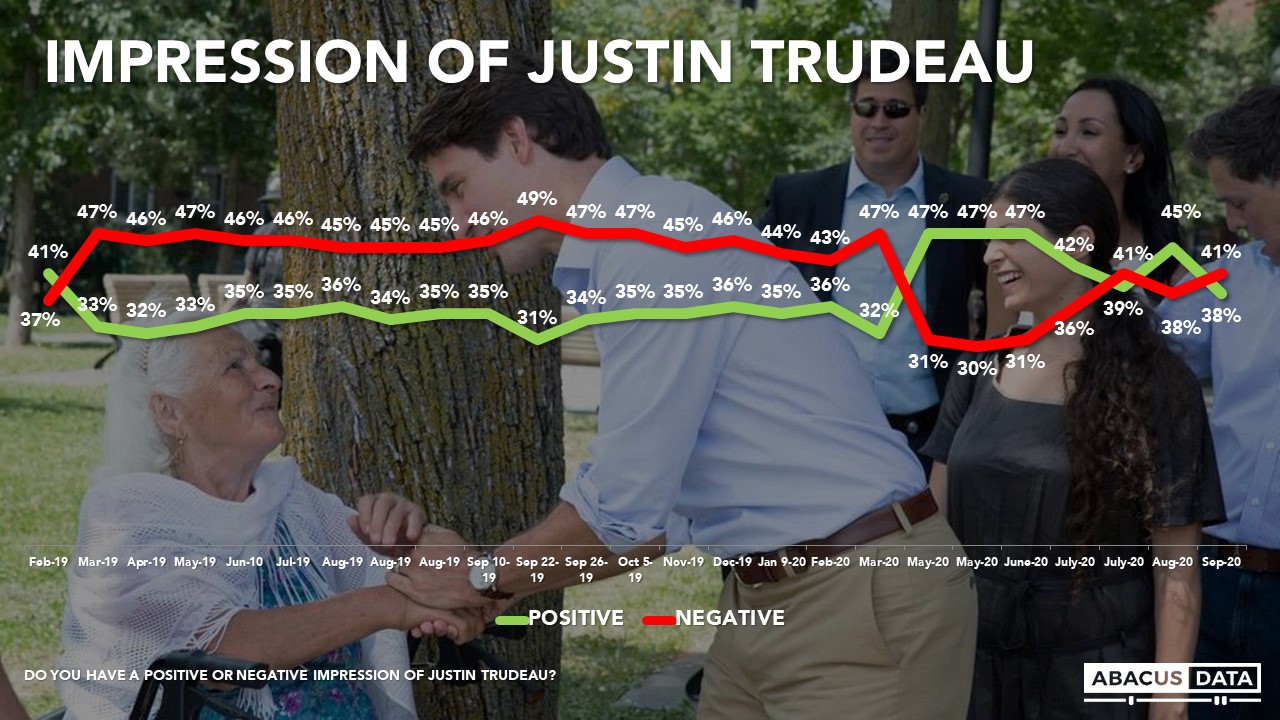 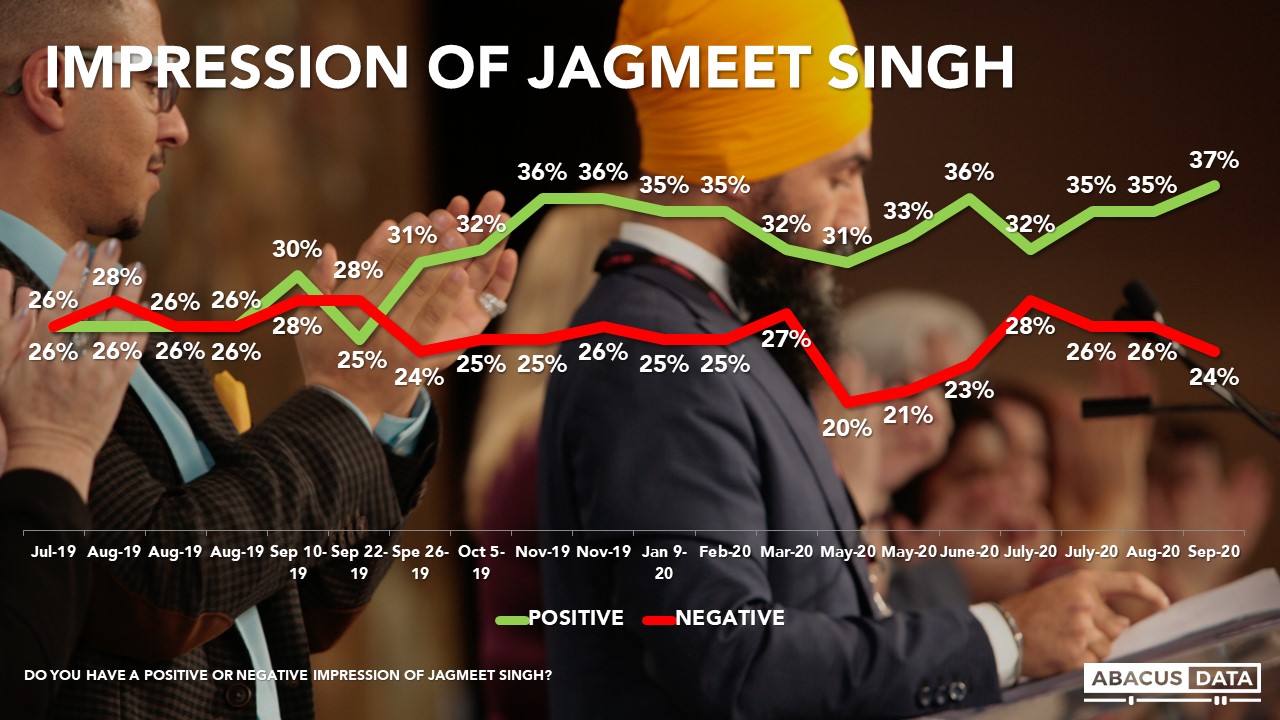 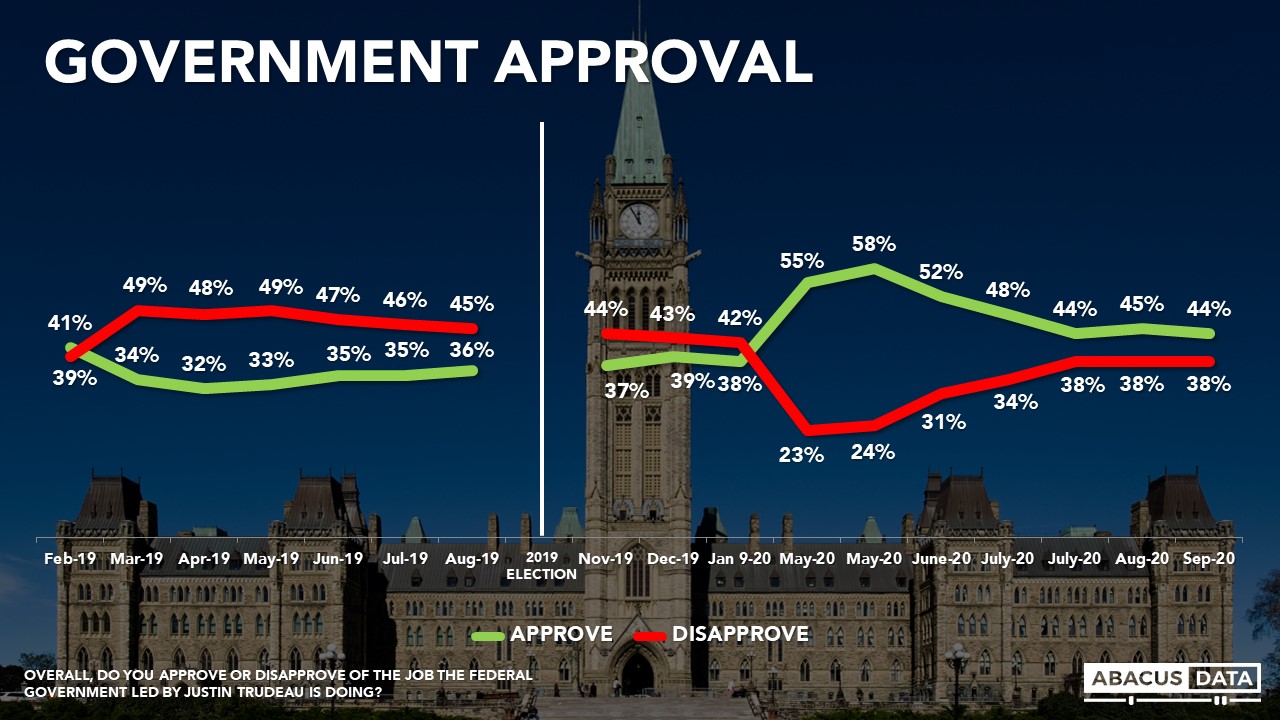 Three of four people who voted Liberal last fall approve of how the government is doing, while 12% disapprove. Conservatives hold almost opposite views with 74% disapproving and 14% approving. New Democratic and Green voters are evenly split with 42% approving of the federal government and 36% disapproving while Bloc voters in Quebec are more likely to disapprove than approve by more than a 2 to 1 margin. 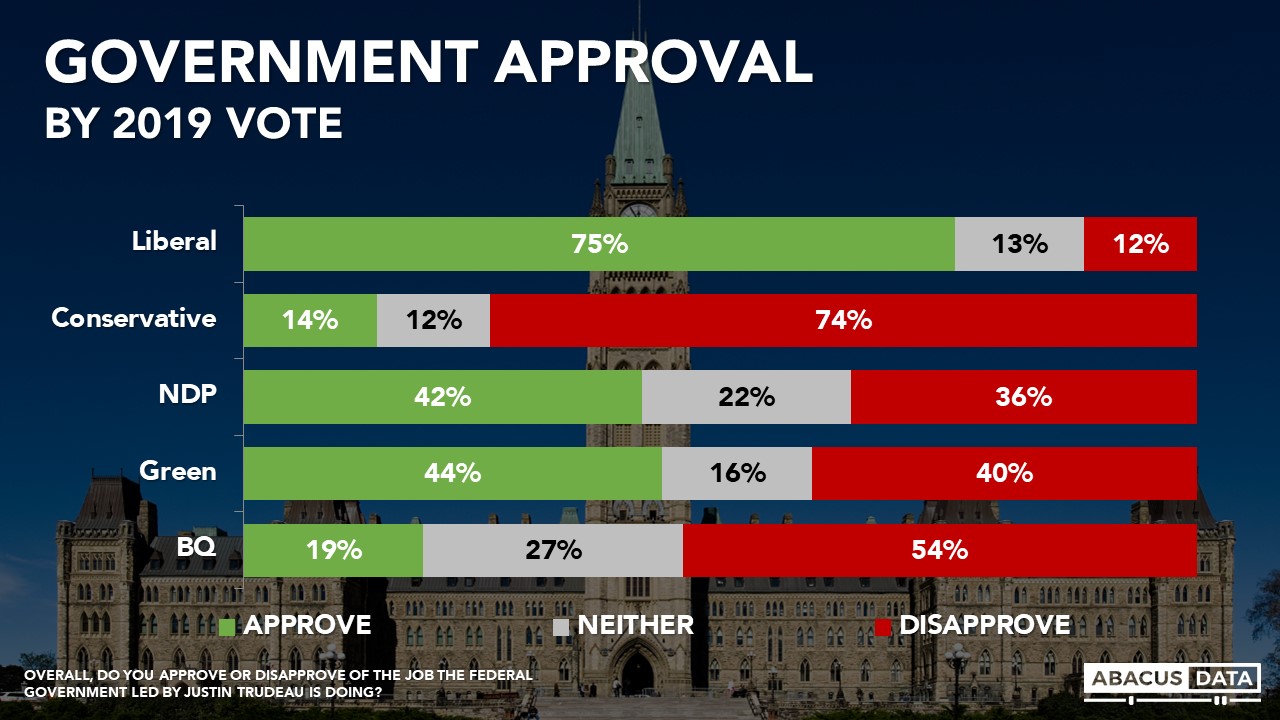 According to Bruce Anderson: “Andrew Scheer’s unpopularity has been removed as a political factor, and the signals are that Erin O’Toole is beginning his life as Conservative Party leader in a highly competitive position. Scheer was disliked by 47% of voters; O’Toole is disliked by only 19%. The narrowing of the gap indicates that support for the Liberals was to some degree anyway built on dislike for Scheer, and the Liberals now need to assume they are locked in a race that feels more head to head, than ahead by a length.

These numbers also suggest that a not insignificant proportion of Liberal voters are less than enthused about the performance of the government and while the government used to be able to count on broad support from NDP voters – this too has softened. BQ voters are attitudinally looking more like Conservative voters in their feelings about the federal government. None of this looks like the mood of people who see a clear agenda from Ottawa, and probably reflects a sense that the agenda has seemed somewhat diffuse and defensive for weeks.

We’ll dig into more details about how different issues are affecting choice in our next release or two.”

According to David Coletto: “The political environment in Canada appears to be highly competitive as the Liberal government aims to reset the agenda with a Throne Speech later this month.

The Liberals and Conservatives are essentially tied while the NDP support slowly crept up to 18%. Close to its high point over the past few months.

First, Erin O’Toole’s first days as Conservative leader appear to have started well. His positives are up 7-points while his negatives are down.

Second, I’d watch Quebec carefully. Views of Mr. Trudeau and the Liberal government are quite polarized in the province, and the BQ is now tied with the Liberals there.

Third, Jagmeet Singh’s numbers continue to improve. More people have a positive view of the NDP leader today than they have at any point in our tracking.

Finally, Liberal vote share is down while the government’s overall approval rating has remained steady. Only about half of those who approve of the federal government say they would vote Liberal if an election were held today. 16% would vote NDP, 9% would vote Conservative, 5% Green, while 11% say they are undecided.”

The survey was conducted with 2,289 Canadian residents from August 28 to September 3, 2020. A random sample of panelists were invited to complete the survey from a set of partner panels based on the Lucid exchange platform. These partners are typically double opt-in survey panels, blended to manage out potential skews in the data from a single source. 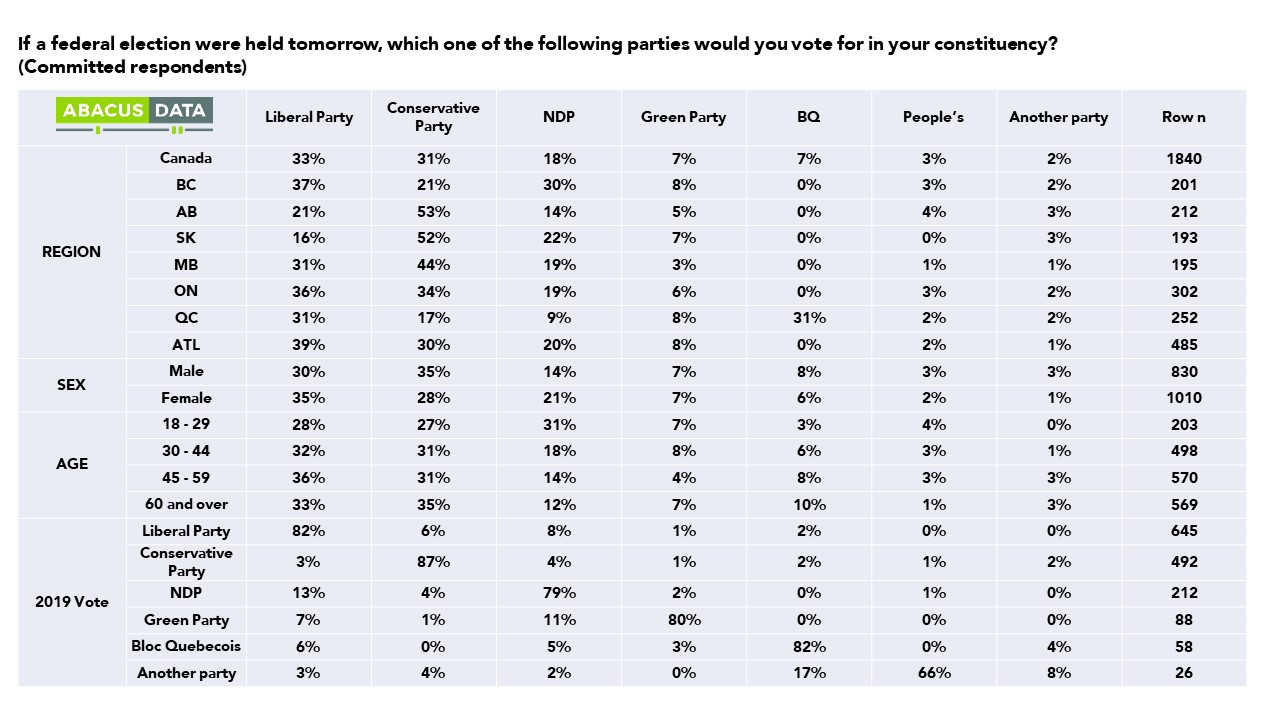 Up For Grabs: Federal Election 2015 a Toss-Up
One thing COVID-19 isn't doing? Widening partisans divisions in Canada
The numbers don't lie. The Conservatives have a Millennial problem they have to deal with.
Tags: Canadian politicsErin O'TooleJagmeet SinghJustin Trudeau