After several weeks of downward pressure caused by the WE Charity matter, Liberal support is showing some signs of recovery.

An election today would see the Liberals (36%) with a 6-point margin over the Conservatives (30%) and the NDP further back with 18%. 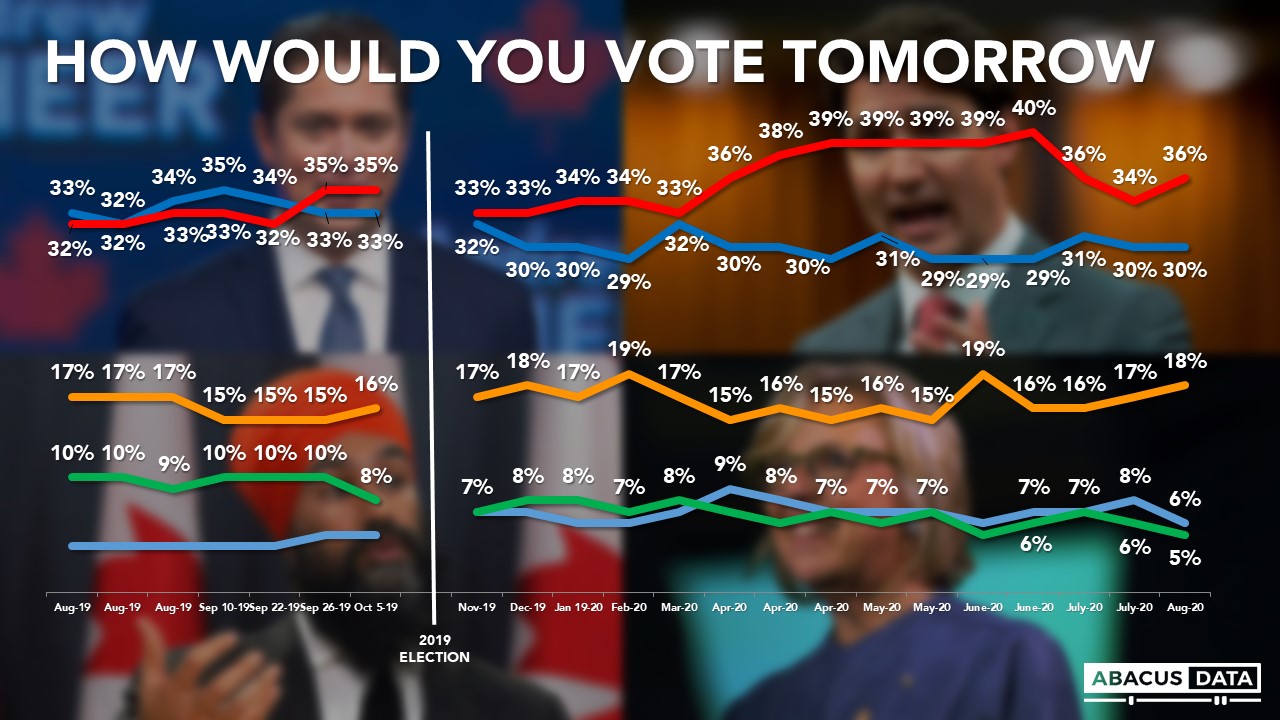 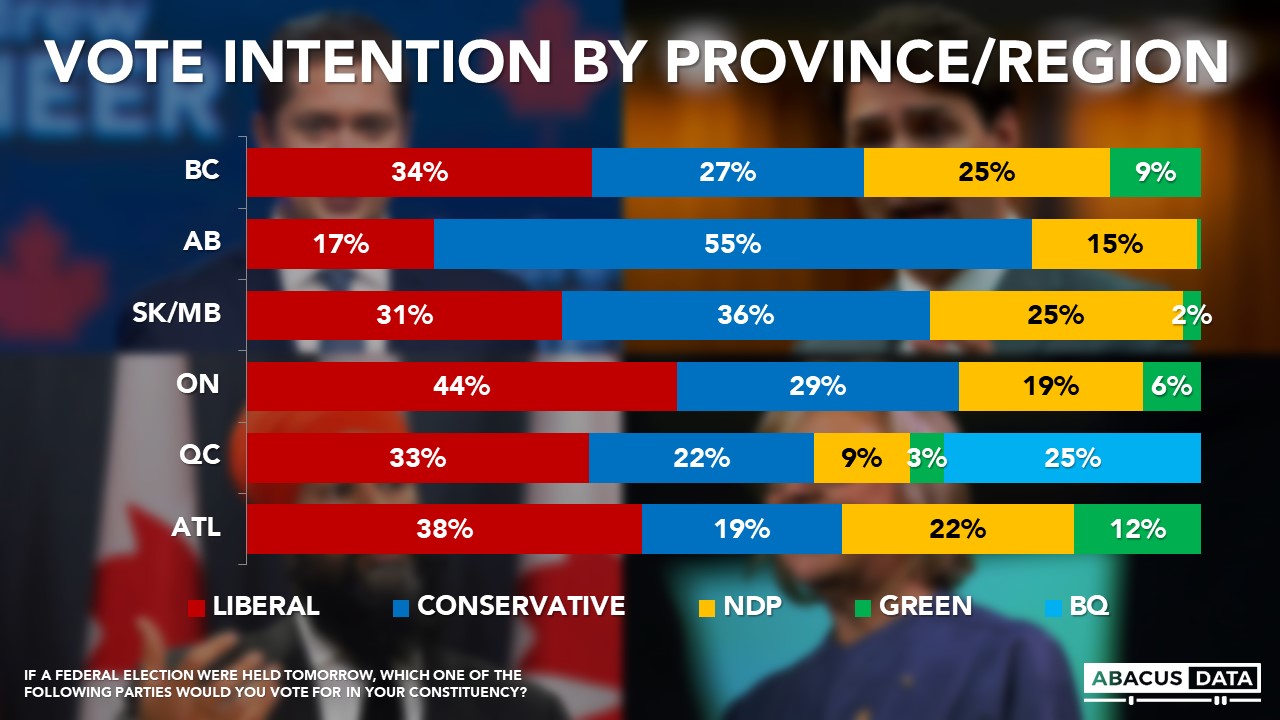 Impressions of Prime Minister Trudeau also improved from our last measurement, by 4-points. As he prepares to leave the leadership of the Conservatives, impressions of Andrew Scheer remain decidedly more negative (47%) than positive (21%). Views of NDP leader Jagmeet Singh are stable at 35% positive and 26% negative. 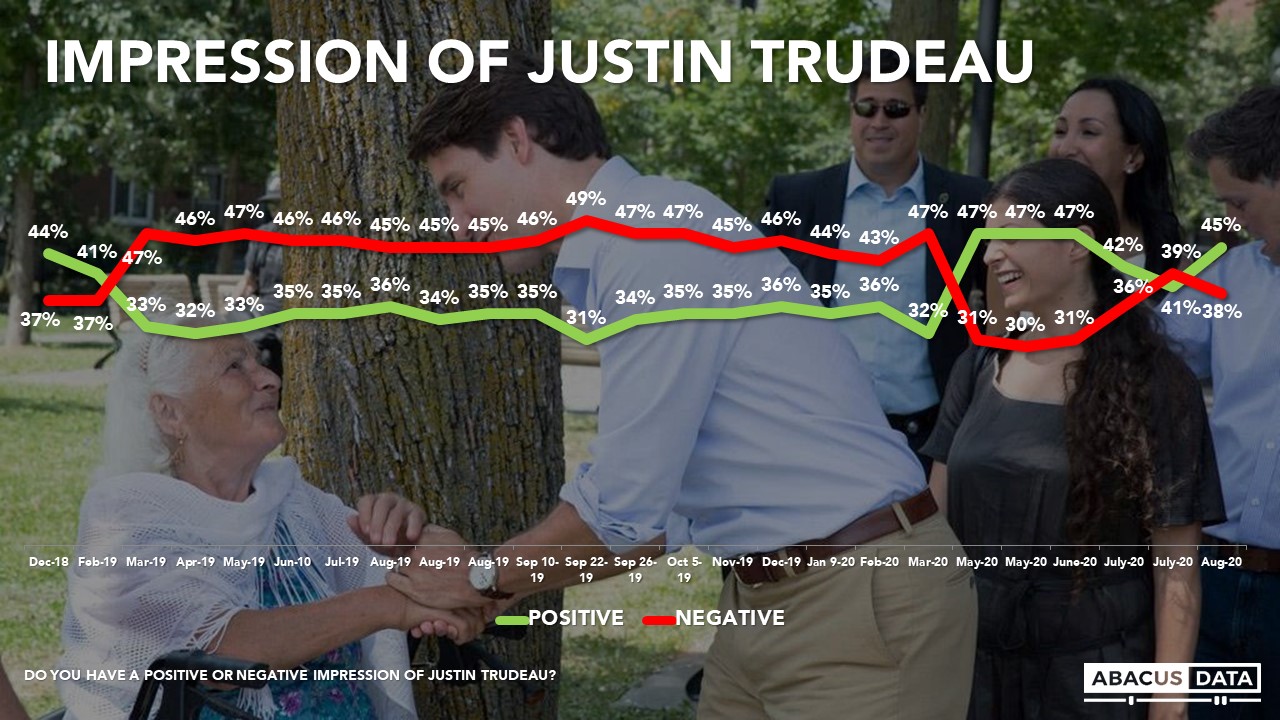 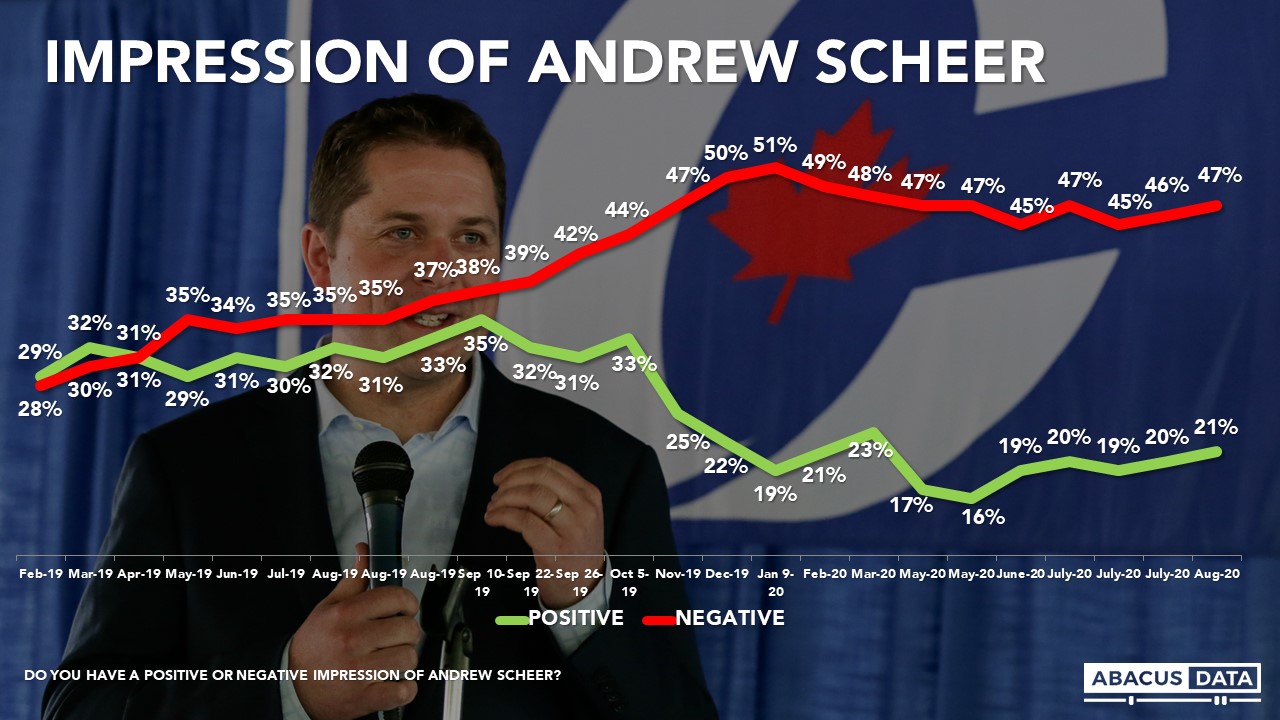 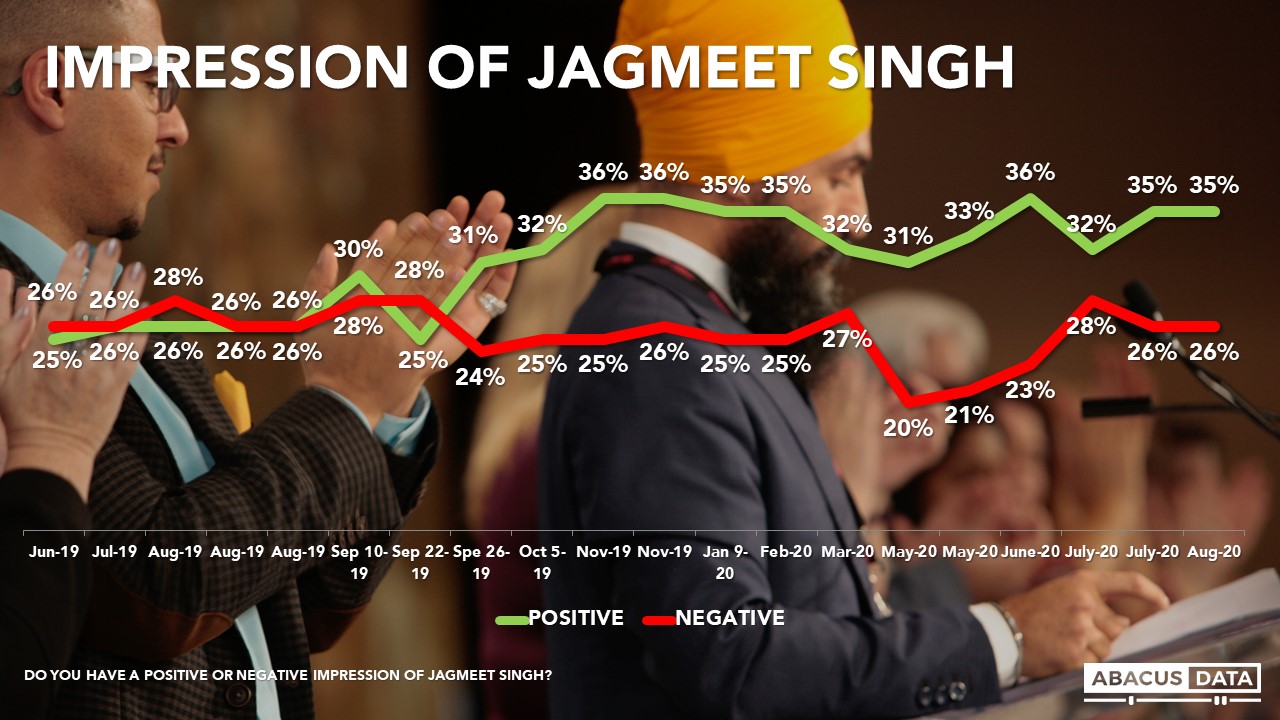 Approval of the federal government had been declining for three straight measurement periods. Still, that decline has stopped in this survey, with 45% saying they approve of the job Ottawa is doing and 38% disapproving. A year ago, in the wake of the SNC scandal, those numbers were the reverse, with 36% approval and 45% disapproval. 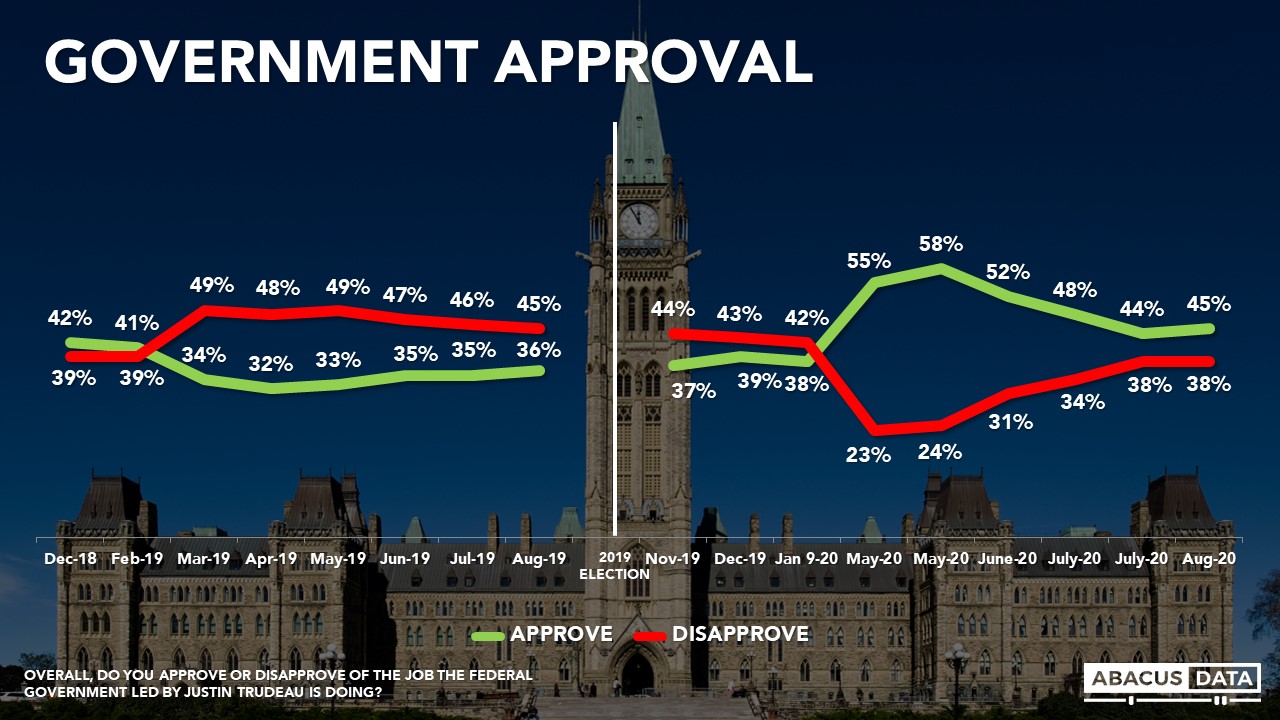 The accessible voter pool for the Liberals has not been materially affected by the WE matter, with 53% saying they would consider voting Liberal, compared to 46% for the NDP and 44% for the Conservatives. 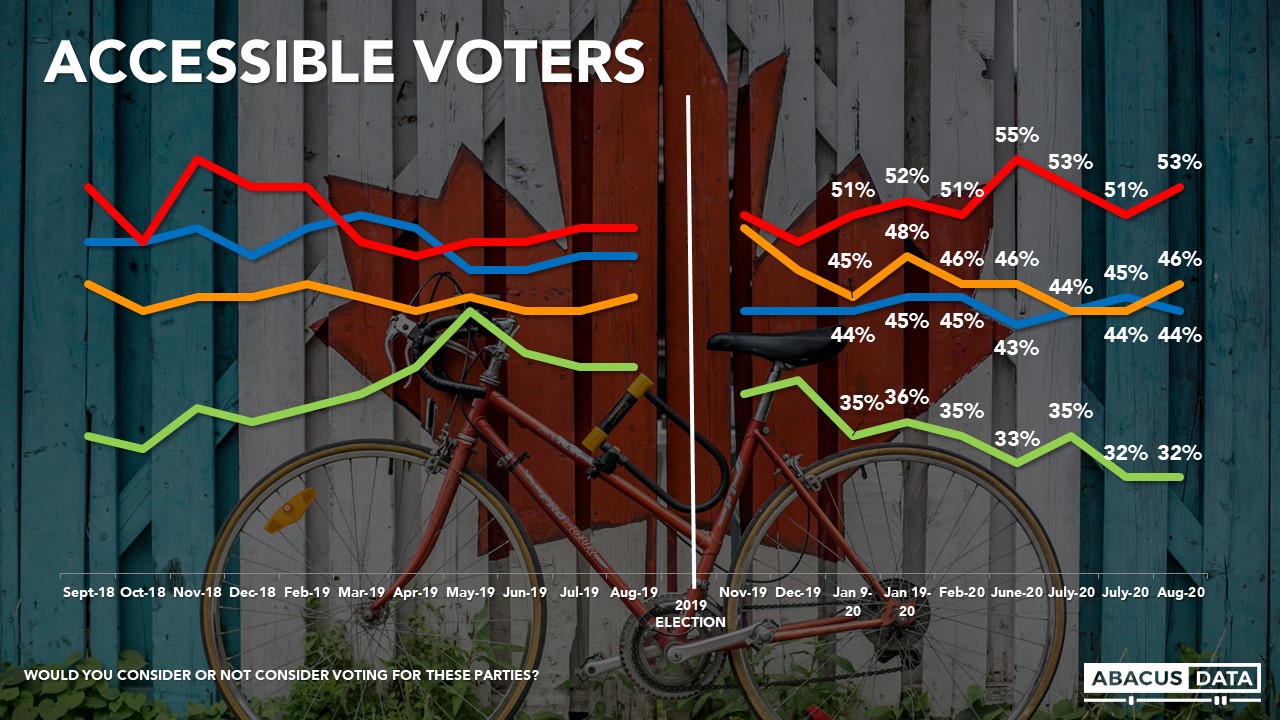 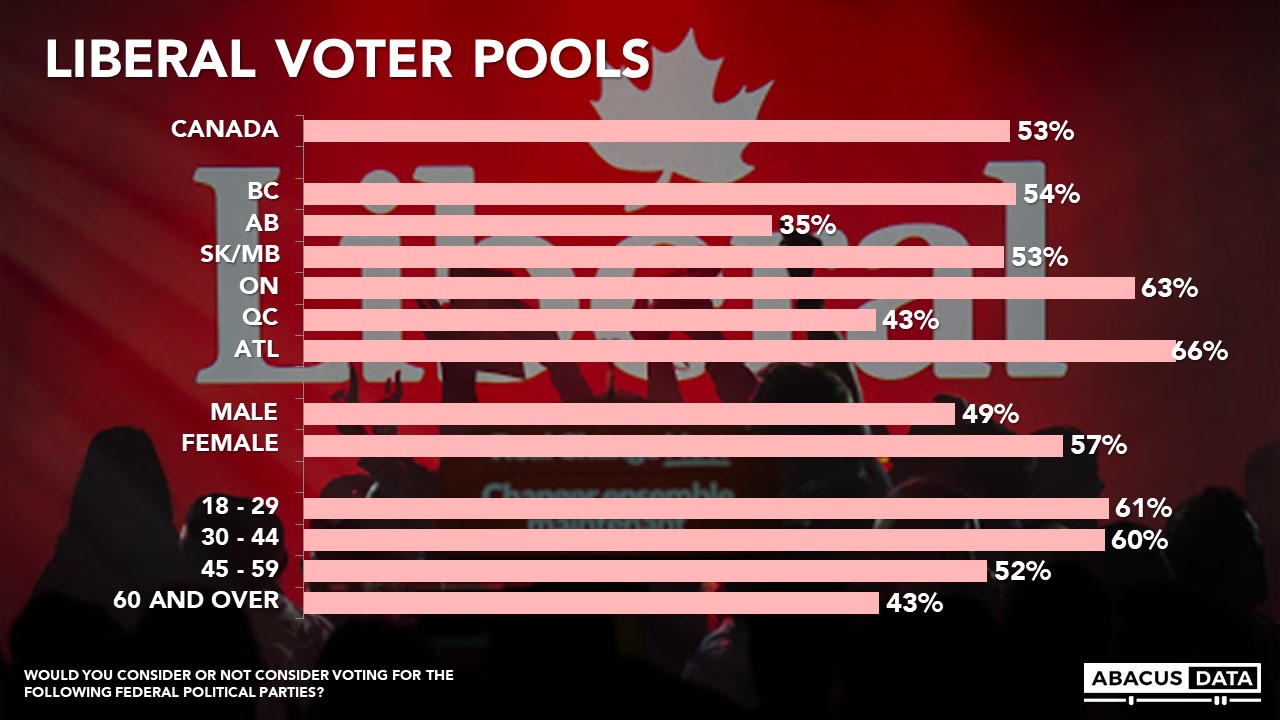 For the Conservatives, their accessible voter pools are massive advantages in the Prairies. Only 32% of Quebecers would consider voting Conservative. 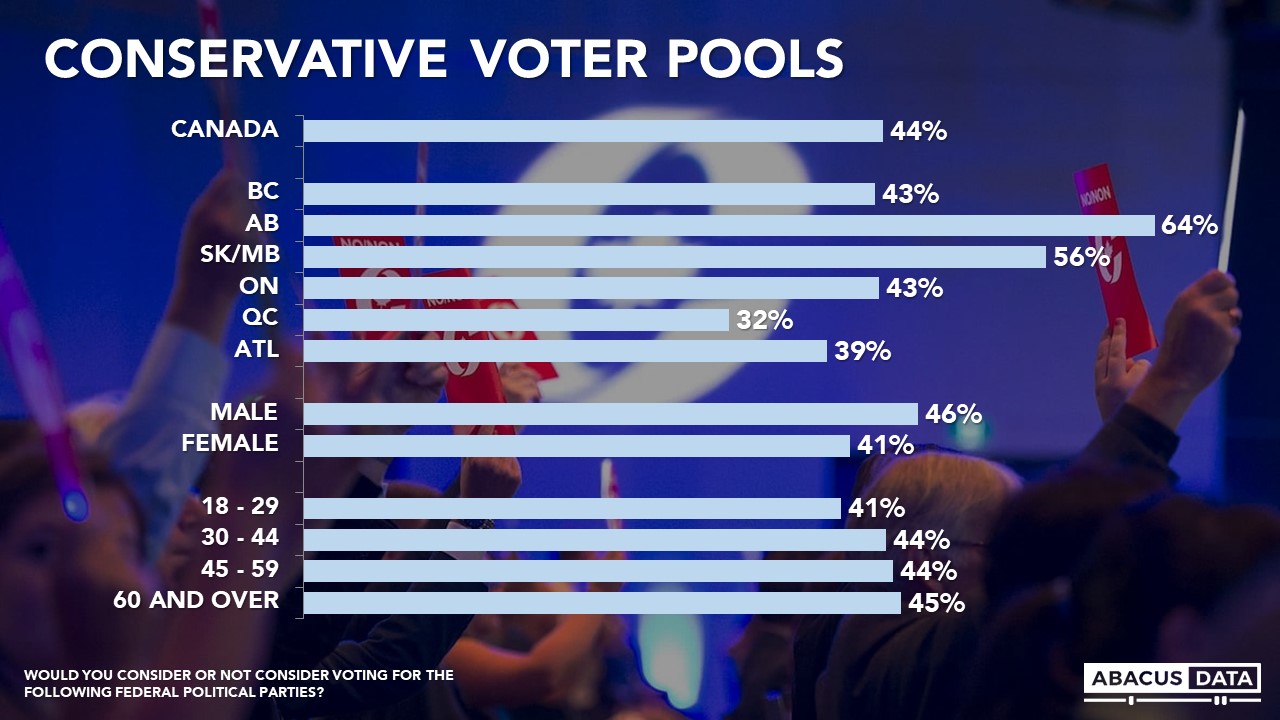 The NDP finds more extensive accessible voter polls in BC, Atlantic Canada, and Ontario, where about half of people in those regions open to voting for the party. Only 1 in 3 Quebecers are open to voting NDP. More importantly, while the voter pools for the Conservatives and Liberals are relatively consistent across age groups, the younger Canadians are much more open to voting NDP than older Canadians. Only 30% of those aged 60+ would consider voting NDP, half as many as those aged 18 to 29. 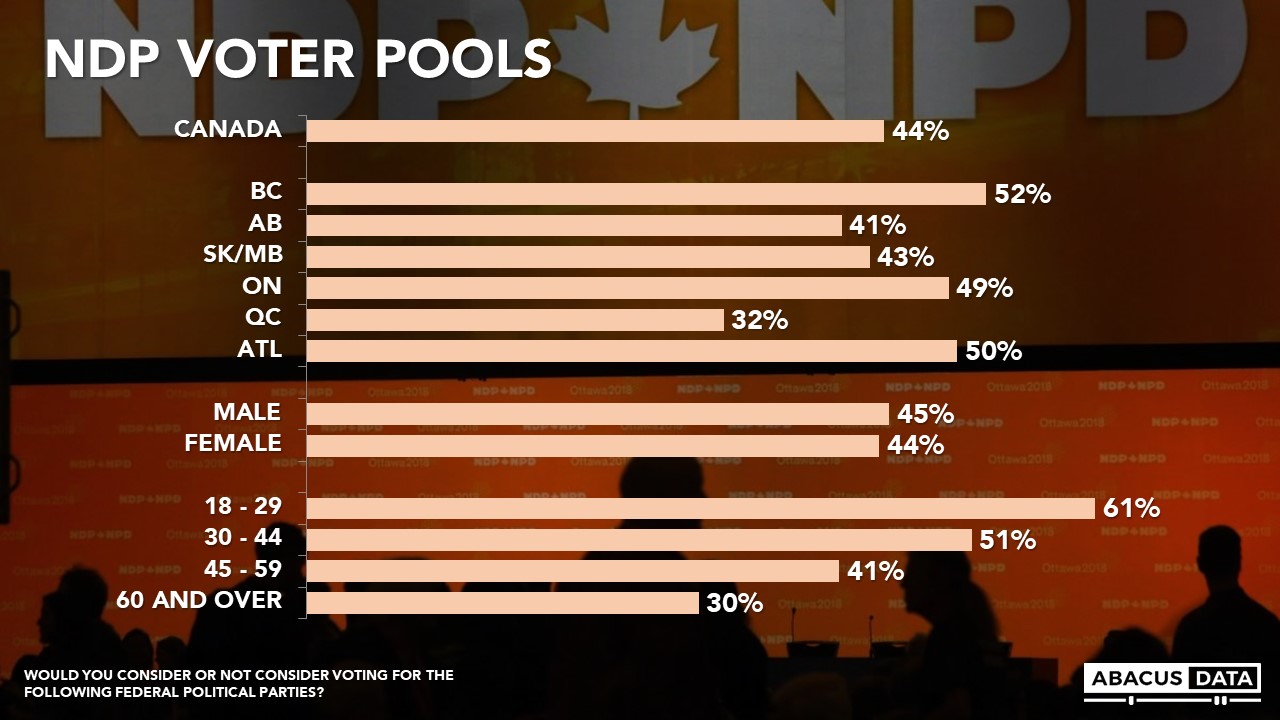 According to Bruce Anderson: “Canadians generally seem to have returned their focus to everyday life, enjoying what’s left of the summer, managing life during COVID, the return to school, the future of the economy, the election in the US. The Conservatives have an opportunity to re-set their party with a change of leaders in the next week, but so far, many Canadians are not looking for a fundamental change in direction. Anxiety is high about many things, but skirmishing in Ottawa is not at the top of that list of things for many people, it seems.”

According to David Coletto: “The bleeding from the WE controversy seems to have stopped, and Liberal support has rebounded, giving the incumbents a healthy lead over the Conservatives. The Prime Minister’s image has improved over the past few weeks.

As the Conservatives select their new leader this week, the party finds itself in one of its weaker positions over the past decade. It continues to have a smaller accessible voter pool than either the Liberal or New Democratic parties. Andrew Scheer remains the most unpopular national party leader. Whoever becomes Conservative leader will have a lot of work to expand the party’s appeal. Despite all the challenges the Liberals have faced over the past few months, the party’s support is stuck in the low 30s.”

The survey was conducted with 1,500 Canadian residents from August 14 to 19, 2020. A random sample of panelists were invited to complete the survey from a set of partner panels based on the Lucid exchange platform. These partners are typically double opt-in survey panels, blended to manage out potential skews in the data from a single source. 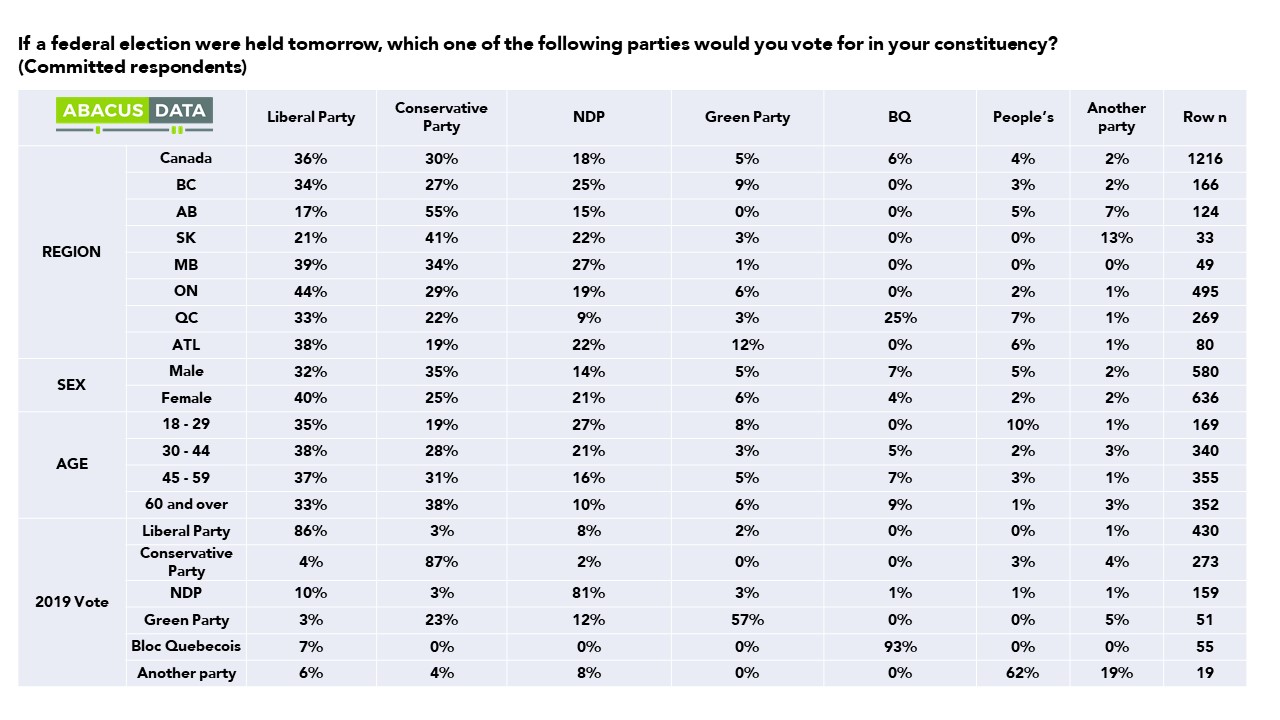 Liberals and Conservatives neck and neck as the race to 2019 takes shape
Conservatives and Liberals locked in dead heat. Eve Adams defection reactions mixed.
Will Max Bernier be a spoiler for the Conservative Party?
Tags: Canadian politics