2020 was a year to remember, or perhaps to forget.

It started with rail blockades, wildfires in Australia, and Ukrainian International Airlines Flight 572 being shot down in Iran that killed 55 Canadians and 30 permanent residents. A few weeks later, the Coronavirus was spreading around the world and starting in mid-March through the rest of the year, much of the country was facing serious restrictions on economic activity and social lives.

Given this unprecedented time, we were keen to track public attitudes and we interviewed more Canadians for our surveys than we have in any of our ten previous years in the business.

In this report, we do a quick comparison of some key tracking metrics comparing our first national survey in January 2020 with our last one in December 2020.

2- None of the federal political parties find much more support than they did in January with the Liberals holding a slight advantage over the Conservatives at the end of 2020.

3 – Pessimism about the near term future of the economy is elevated compared to January, but personal financial confidence is remarkably similar to what we say at the beginning of the year.

Here’s a review of where things stand today.

Direction of the Country 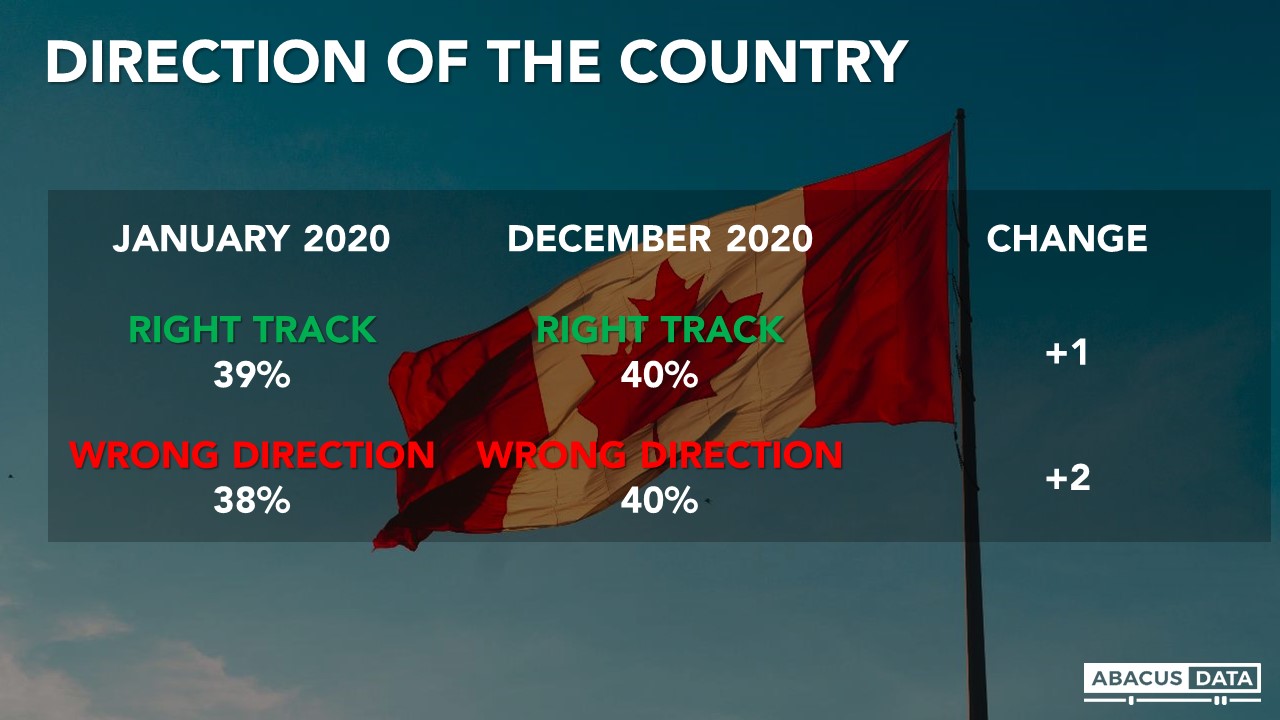 More Canadians approve of the job performance of the federal government today than they did back in January. 45% approve, up 7 from January while 36% disapprove, down 6. 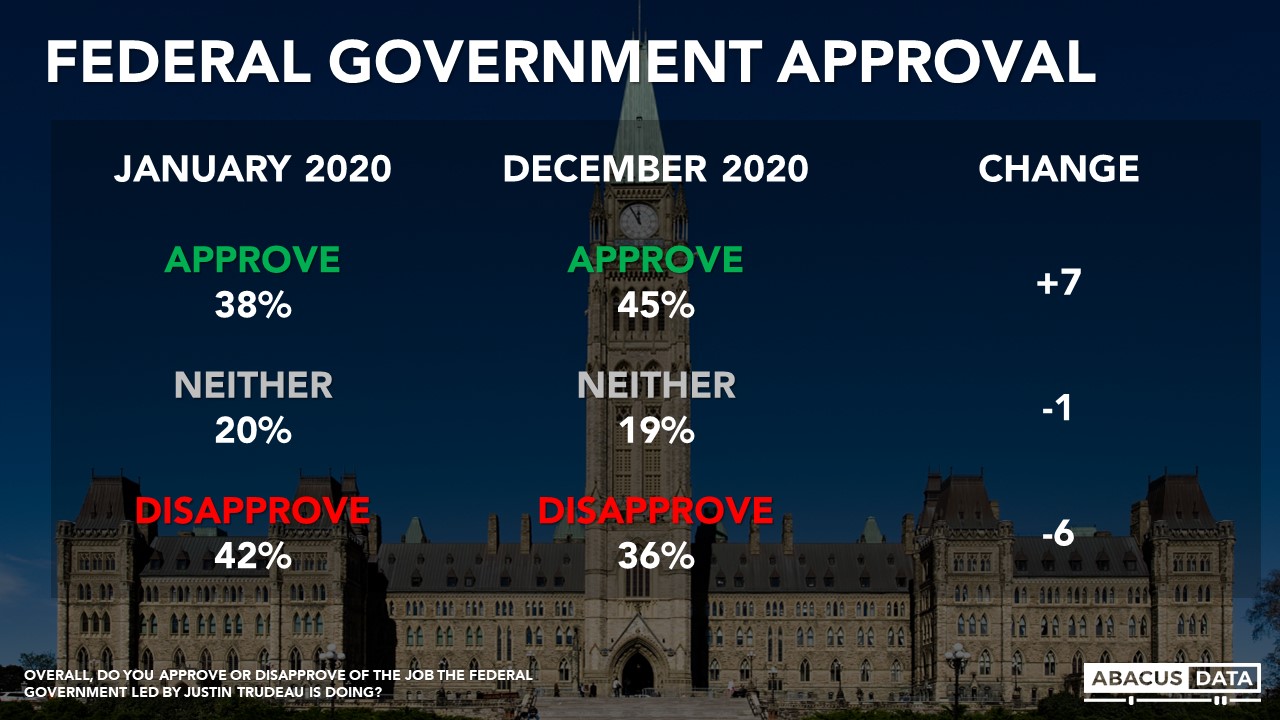 Mr. Trudeau’s personal image is improved since the start of the year. In January, 35% had a positive impression of the Prime Minister. Today’s it is up 4-points to 39%. His negatives are down 7 since January (44% to 37%). 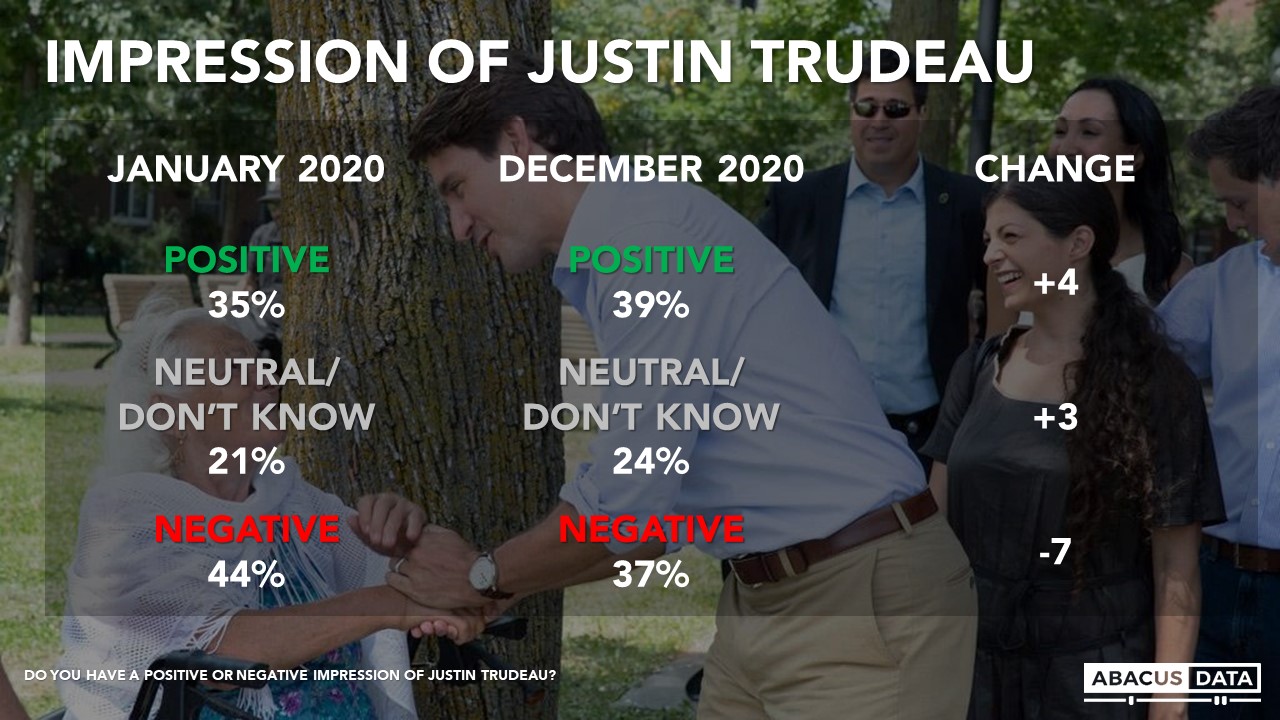 When the year started, Andrew Scheer was Conservative Leader and was viewed negatively by Canadians. Erin O’Toole, the new Conservative leader finds himself with negatives much lower than those of Scheer, while his positives are slightly higher (22% vs. 19%). 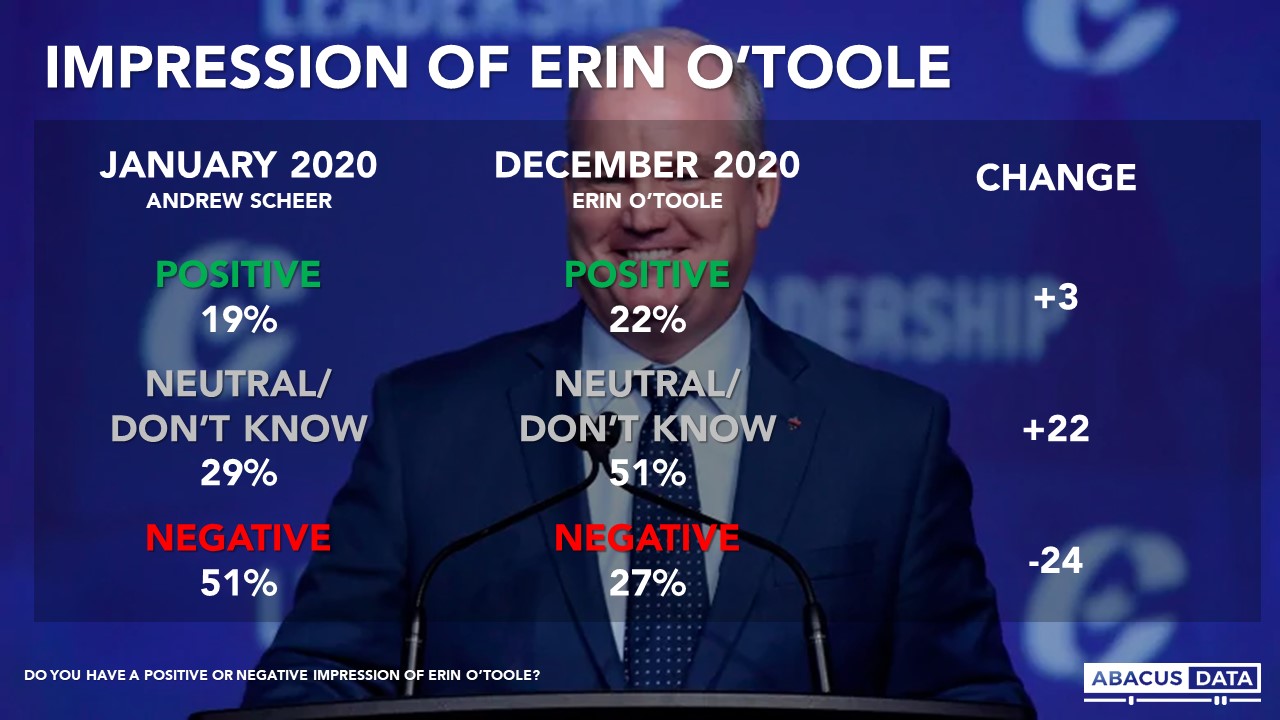 Views of Mr. Singh haven’t changed much since the start of the year. In January he had a +10 rating. Today it is +9. 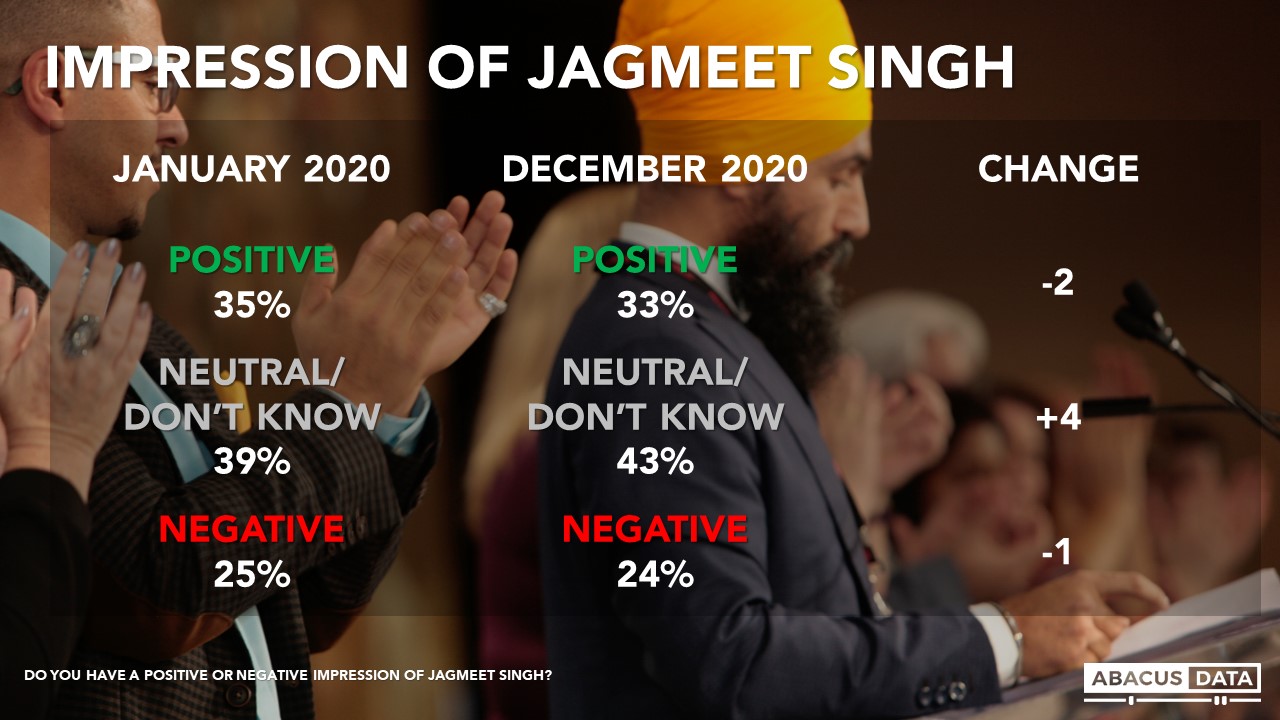 If an election was held at the time of the survey, the Liberals would hold a slight advantage nationally. The Liberals are ahead of the Conservatives by 3-points (35% to 32%) while the NDP is in third at 17%. Compared with January, there has been almost no change in national vote intention. 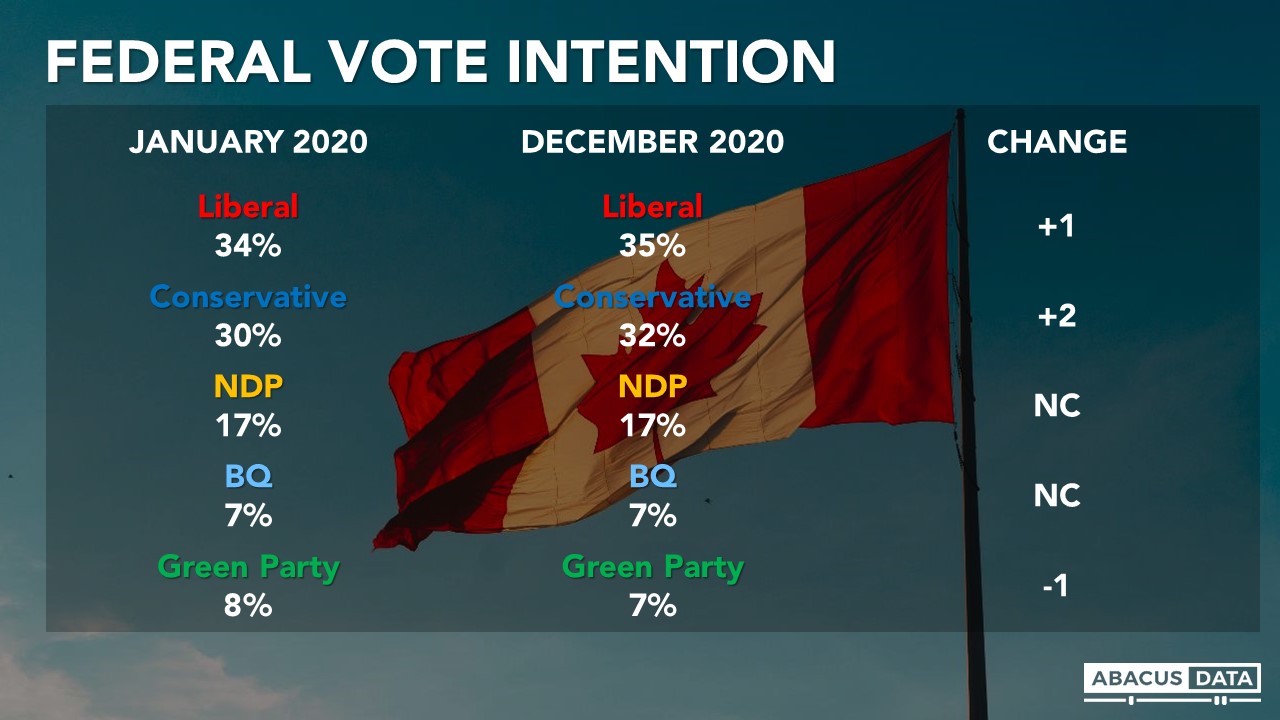 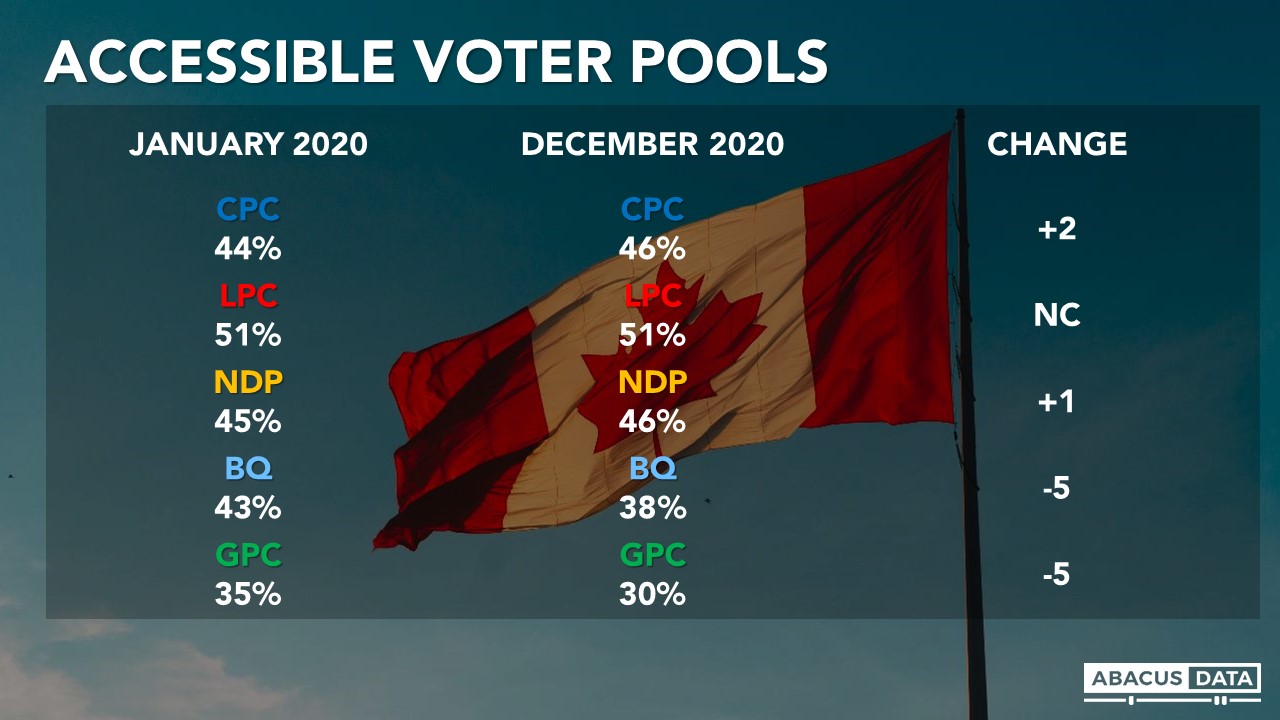 Today, 48% describe the current economic conditions in Canada negatively compared with 29% at the start of the year. 1 in 4 feel positive, down 15-points since January. 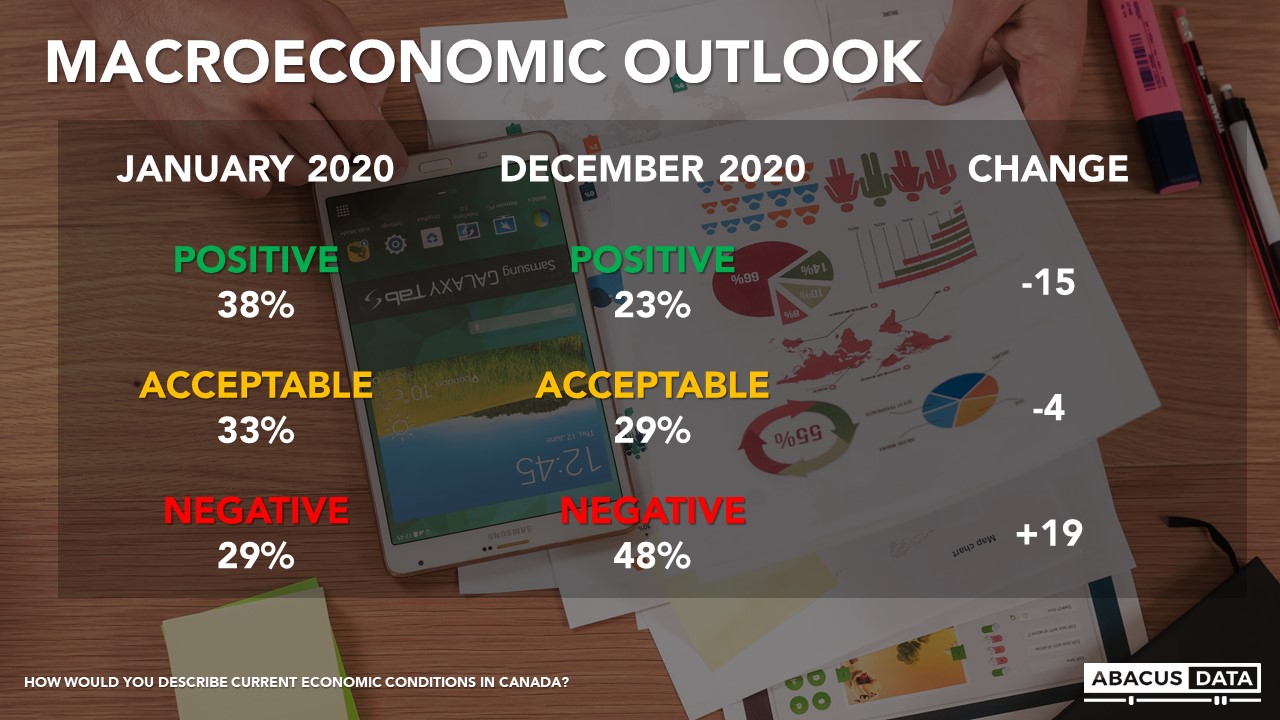 Despite the weaker macroeconomic outlook, the same percentage of Canadians as in January feel confident about the personal financial situation. In fact, those who describe their financial situation as “worried” is 3-points lower than at the start of 2020. 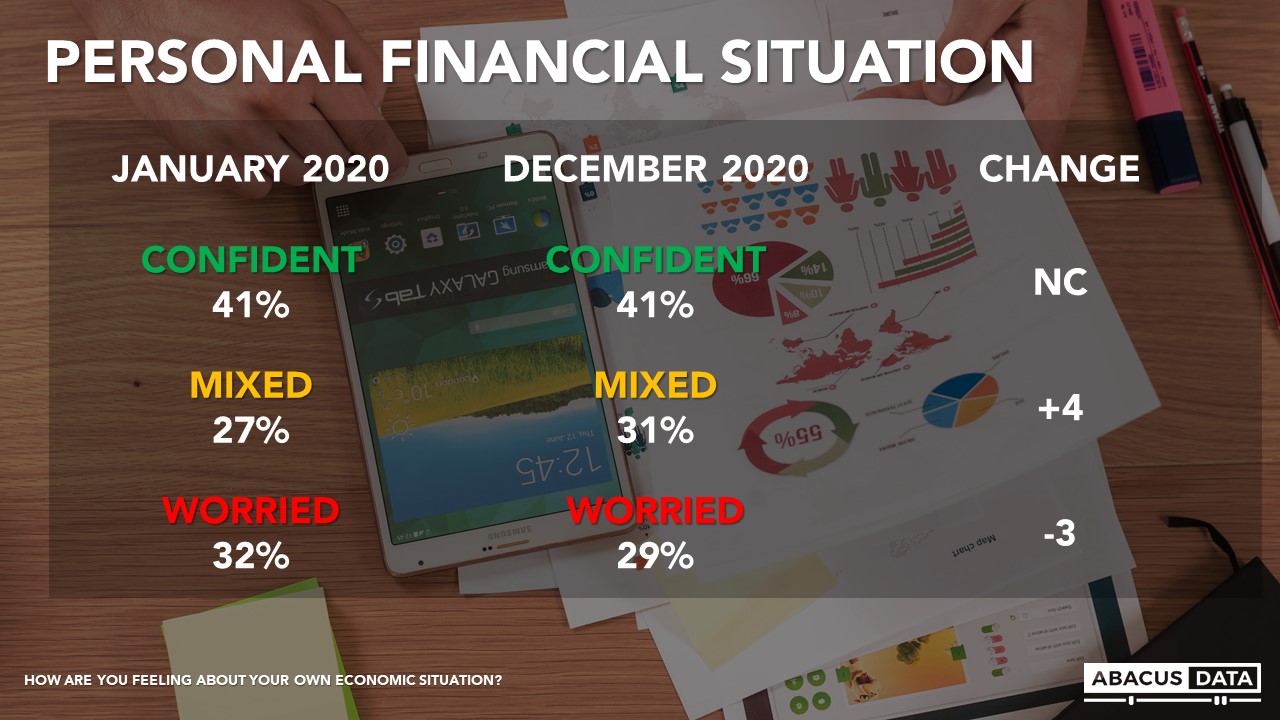 Provincial Economic Outlook in Next 12 Months

When asked how their provincial economic will do over the next 12 months, 40% think it will be in recession, 28% think it will grow, while 32% say neither recession nor growth. This outlook is more negative than it was at the start of 2020. 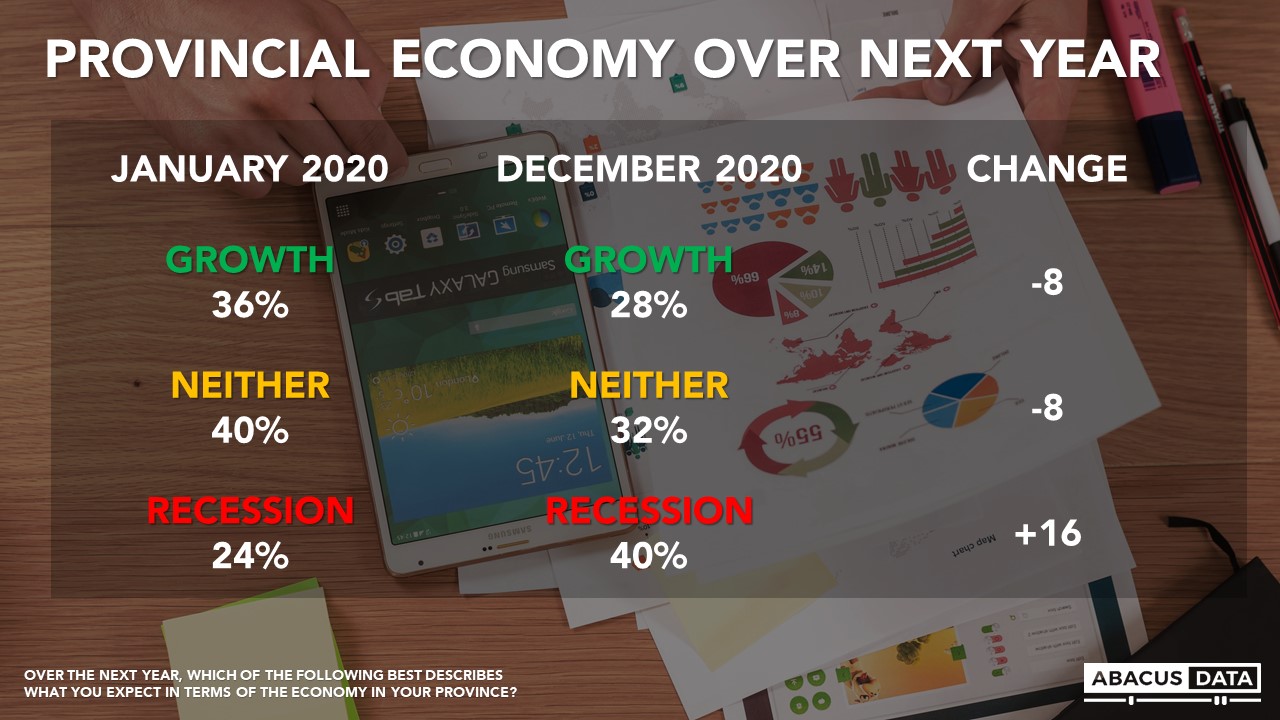 According to Bruce Anderson: “The numbers in one sense reveal that many people have suspended their interest in politics as they have grappled with the pandemic and the economic and health fallout.  Still, to the extent that some inferences can be taken, the ones that stand out for me are first that the WE matter, a massive increase in the deficit, the various pressures and tensions that come with the pandemic the Trudeau government enjoys more public confidence today than it did in January, only 3 months after re-election.

Second, replacing the unpopular Andrew Scheer with Erin O’Toole erased a major negative for the party – but to date, there has been no increase in accessible voters, current support for the party, and not much to show in terms of building enthusiasm for Erin O’Toole personally.  His strategy of brittle attacks on Trudeau personally, a heavy emphasis on China-bashing but without really making it clear how a vote for China-bashing would help the average Canadian, and closing the year with attacks about vaccine availability which may be backfiring as vaccines arrive, should perhaps give the Conservative leader pause to reflect on whether Canadians are looking for something different from the opposition leader.

Finally, the attitudinal resilience of Canadians is unmistakable in these numbers.  People enter what should be a better year with a reasonable – and frankly remarkable – level of personal economic confidence.  Optimism may have been much lower were it not for efforts to cushion the effects of the pandemic, and while some difficult months lie ahead, Canadians are, tentatively perhaps, showing faith that the country will have better days before too much longer.

“For parties planning election strategies, national numbers are less important than the regional races, and in particular those regions that are up for grabs. Looking at the data from that standpoint reveals some positive indications for the Liberals. Across the rest of Canada apart from Alberta and Saskatchewan, (where the Liberals have no seats and thin prospects at best) approval of the Trudeau government finished the year 8 points better than the January level, and Justin Trudeau’s personal rating went from a -3 to a +8. In the rest of Canada, the Liberals started the year with a 10 point lead and finished with an 11 point lead.

The Conservatives – in order to win an election – need to make up ground in places other than Alberta and Saskatchewan. Replacing Scheer who had a -36 rating in the rest of Canada with O’Toole who has a -8 rating, may help but to date, this has not translated into a boost in support, which was 26 in January and 27 at the end of the year.”

According to David Coletto: “After one of the most unprecedented years in most Canadians lifetimes, it’s remarkable how little has changed in terms of aggregate public attitudes about our political leaders and the direction of the country. That being said, as we enter 2021, there are some notable shifts.

The Prime Minister and his government start the new year with more goodwill and general approval than when 2020 began. More view Mr. Trudeau positively than negatively after facing the reverse for most of 2019.

Despite severe economic, health, and social disruptions caused by the pandemic, Canadians are as optimistic about the direction of the country as they were at the start of 2020 and as many feel confident about their personal economic situation as did before it all started.

Despite two new federal party leaders, immense government intervention in the economy and a massive deficit, the overall vote intention numbers remain remarkably consistent. Today, the Liberals would likely win again although the likelihood of a Liberal majority, in my view, is a coin flip.”

The survey was conducted with 2,200 Canadian adults from December 14 to 18, 2020. A random sample of panelists were invited to complete the survey from a set of partner panels based on the Lucid exchange platform. These partners are typically double opt-in survey panels, blended to manage out potential skews in the data from a single source.

When the economy "re-opens", what will it take for people to come back in?
NDP facing headwinds as support drops in Quebec.
Follow Up to "Politics Anyone?": Gender Differences by Age Group
Tags: Canadian politicsCOVID-19Erin O'TooleJagmeet SinghJustin Trudeau