Elections can often come down to voters choosing the party or leader best able to handle the issue they care most about it. This is the basis of the Valence Politics model that Canadian political scientist Harold Clarke and his co-researchers have been using for years to explain voting behaviour.

Yesterday, my colleague Oksana Kishchuck reported on some interesting data about what is driving voters’ decisions. On average, respondents said that more than half of their vote decision would be based on (1) which party was best on the issue they cared most about and (2) whether the party could actually deliver on its plan.

1. Which party and leader do you think would do the best job at each of the following issues?

2. Which two of these are most important in you deciding how to vote?

We will continue to track these two questions over the campaign and in our post-election survey, but here’s a quick snapshot of what we are seeing as week 2 of the campaign ended.

As we have reported in earlier bulletins, the top issues in this campaign for voters are the cost of living, healthcare, climate change, and housing. The economy, the deficit, and getting more people vaccinated round up the top 7. 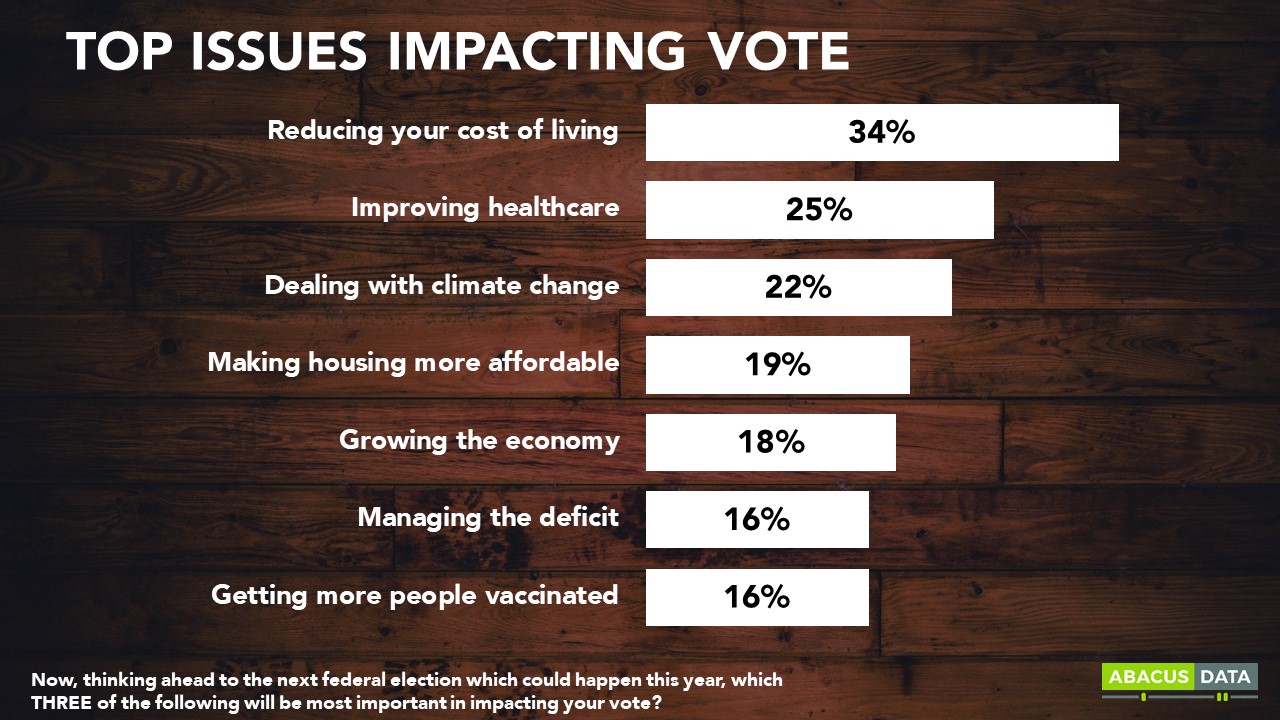 Reducing the cost of living was more likely to be a top issue for those aged 30 to 59 but crossed the political spectrum with at least 30% of Liberal (30%), Conservative (34%), and NDP (33%) supporters putting it in their top 2 issues.

Climate change was a more important issue for those under 30 (31%) than those older (20%). NDP (30%) and Liberal (28%) supporters were far more likely to rate it as a top issue than Conservative supporters (8%)

Further down on the list of issues were protecting public services, running an ethical government, Indigenous reconciliation, and making childcare more affordable. Only 3% said that dealing with the crisis in Afghanistan would be a top 2 issue determining their vote. 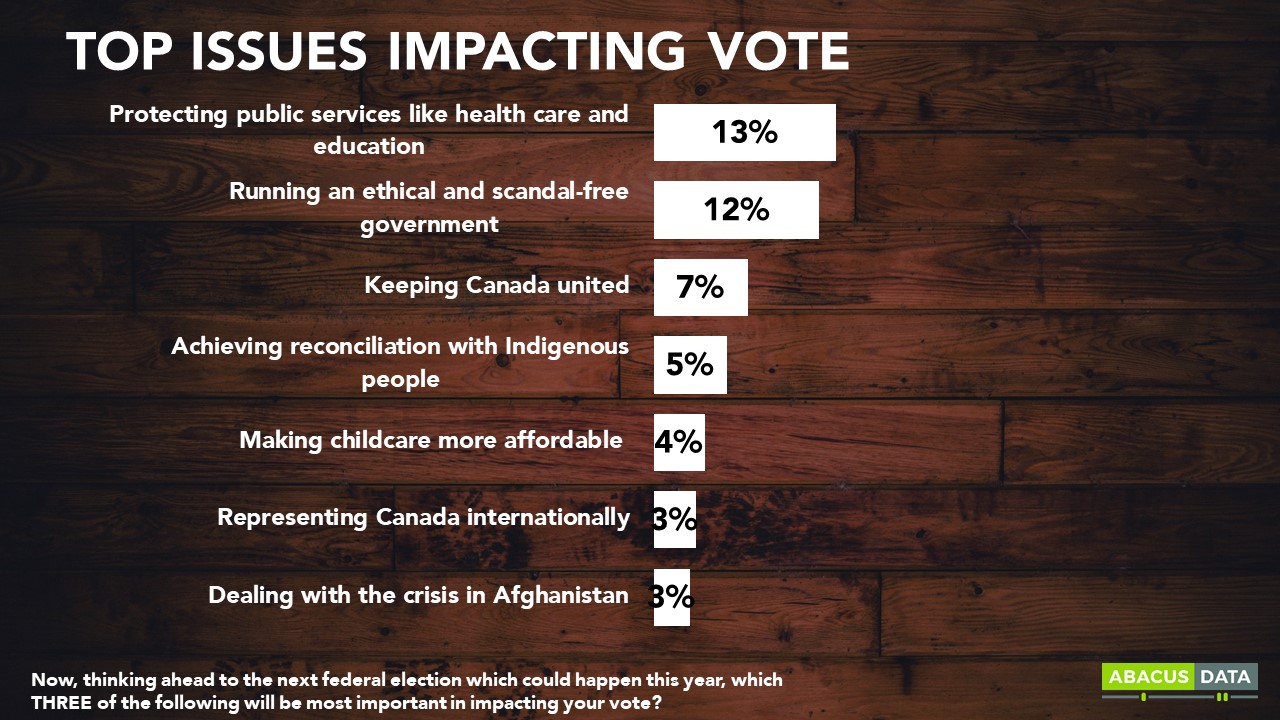 So which party and leader are doing best on these same issues?

Mr. O’Toole and the Conservatives lead on: reducing the cost of living, growing the economy, managing the deficit, and running an ethical government. 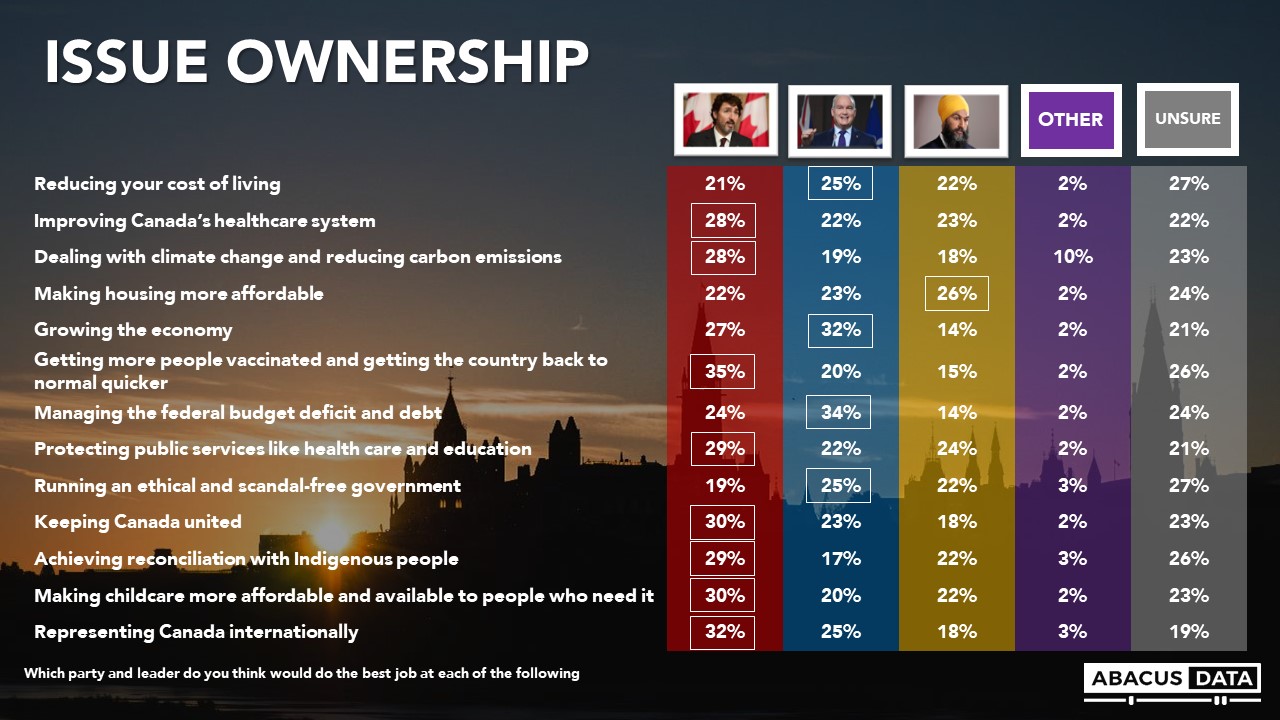 But a deeper look shows that on the five top issues, the margins between the parties on a few are very close.

For example, on reducing the cost of living, there’s only a 4-point gap separating the three parties and 27% say they are unsure. On improving the healthcare system, Mr. Trudeau is ahead, but only by 5-points over the NDP and 6-points over Mr. O’Toole.

On housing affordability, the NDP leads by the narrowest of 3-points ahead of Mr. O’Toole and Mr. Trudeau.

Since the campaign started, perceptions on issue ownership haven’t changed too much. Mr. O’Toole has made gains almost uniformly across the board, while Mr. Trudeau has seen a small increase in his handling of healthcare and protecting public services. These two issues have been part of the conversation last week in the campaign. 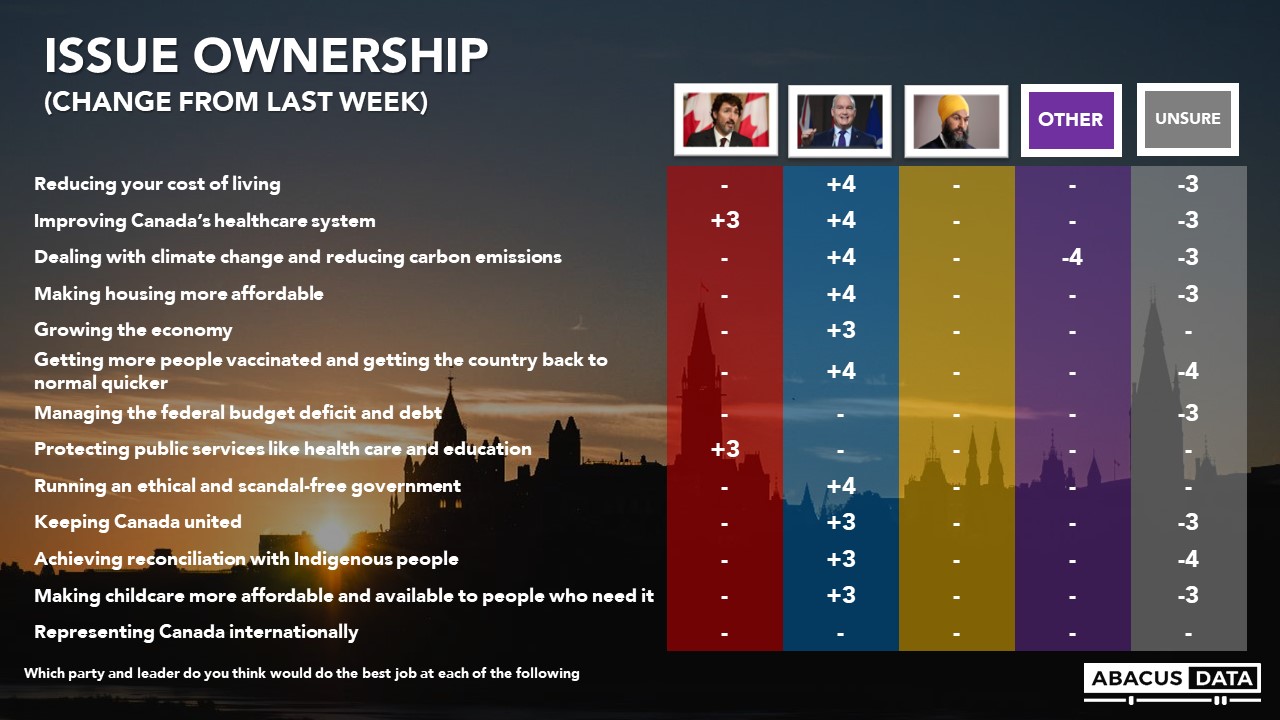 So far, the campaign hasn’t fundamentally changed how voters see the parties handling the main issues or which issues are more salient. The Conservatives and Erin O’Toole have made some progress across the board which is likely a reflection of the improvement in the Conservative vote share and Mr. O’Toole’s personal numbers as well.

The leaders’ debates next week may help clarify some of these questions for voters but given how close the race is right now, gaining even a small advantage on the key issues may be determinative.

This data also shows that the Liberals will want to frame the final two weeks of the campaign as much around climate change, healthcare, and protecting public services. The Conservatives, as they have already done, will want to focus on the economy and reducing the cost of living while the New Democrats should continue to press on housing affordability while also defending against strategic voting tied to worries about healthcare, social issues, and climate change.

Our survey was conducted online with 2000 Canadians eligible to vote from August 24 to 29, 2021. A random sample of panellists was invited to complete the survey from a set of partner panels based on the Lucid exchange platform. These partners are double opt-in survey panels, blended to manage out potential skews in the data from a single source.

The margin of error for a comparable probability-based random sample of the same size is +/- 2.2%, 19 times out of 20. The data were weighted according to census data to ensure that the sample matched Canada’s population according to age, gender, educational attainment, and region.