Our latest national polling data shows that an election held today would see the Liberals with 32% support (down 3 points from last month), the Conservatives at 31% (unchanged), the NDP at 18% (up 1) and the Greens at 7% (up 1). 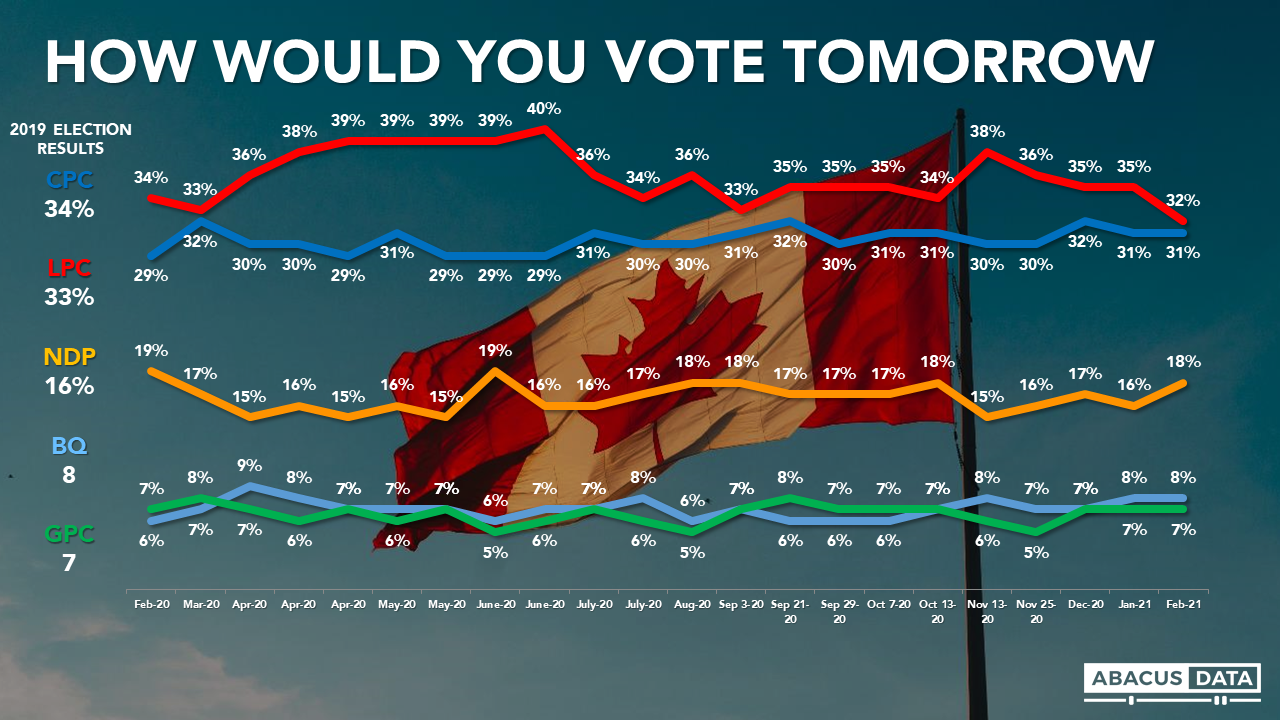 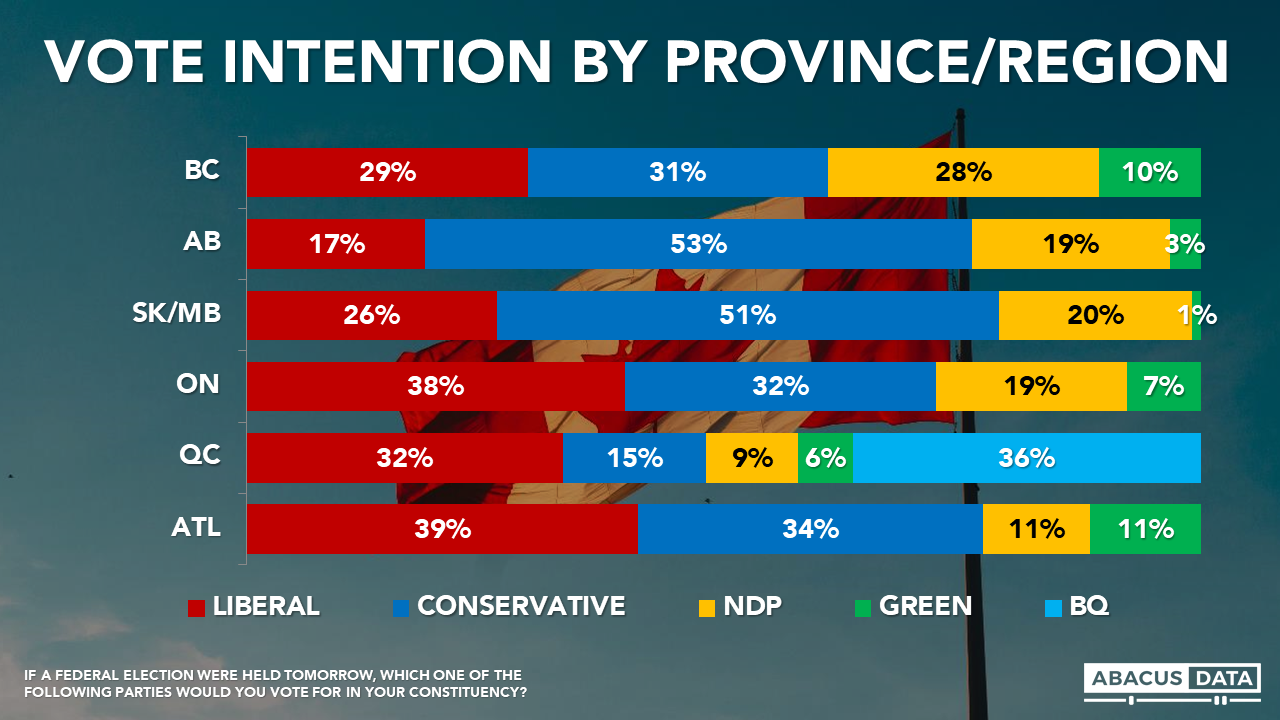 The federal government’s approval rating trended downward since late 2020. Today, equal numbers approve and disapprove of the government’s overall performance, the first time the numbers had met since before the pandemic began in March 2020. 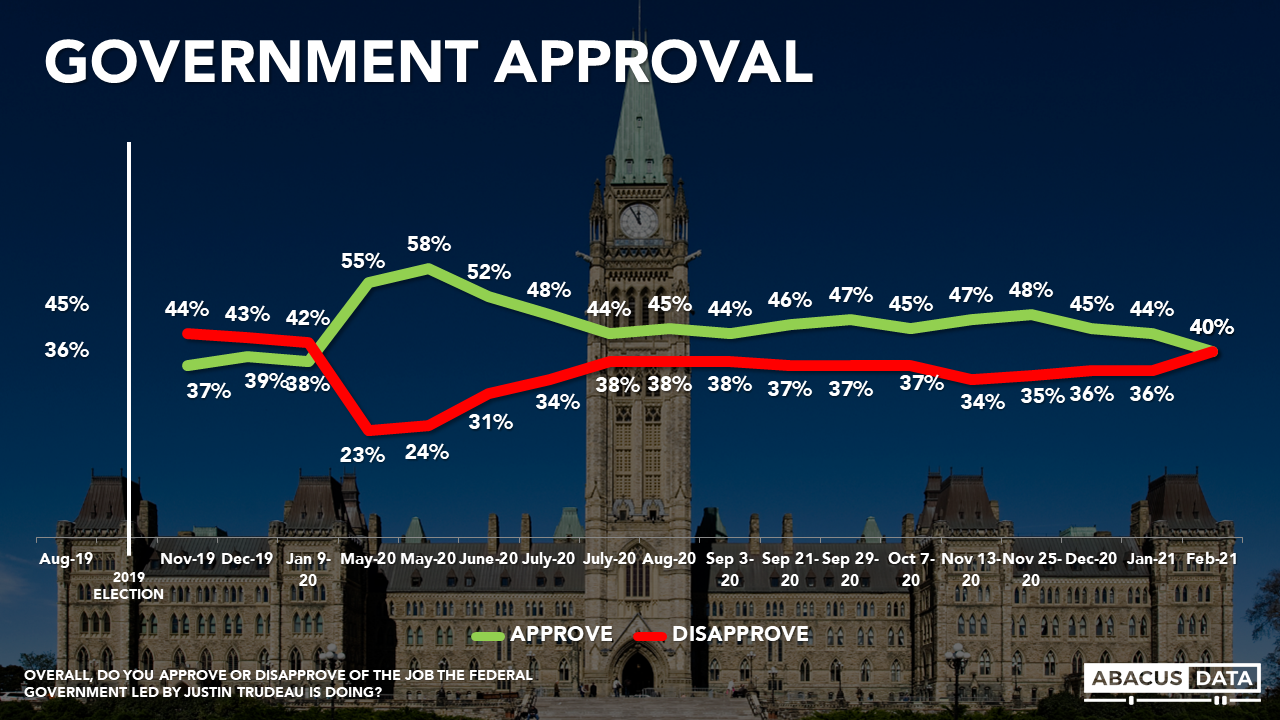 Along with a negative shift in the government’s approval rating, we also find a rise in the Prime Minister’s negatives. Today, 42% have a negative view of Mr. Trudeau compared with 36% who view him positively. Compared with last month, his negatives are up 5 points while his positives are down two. 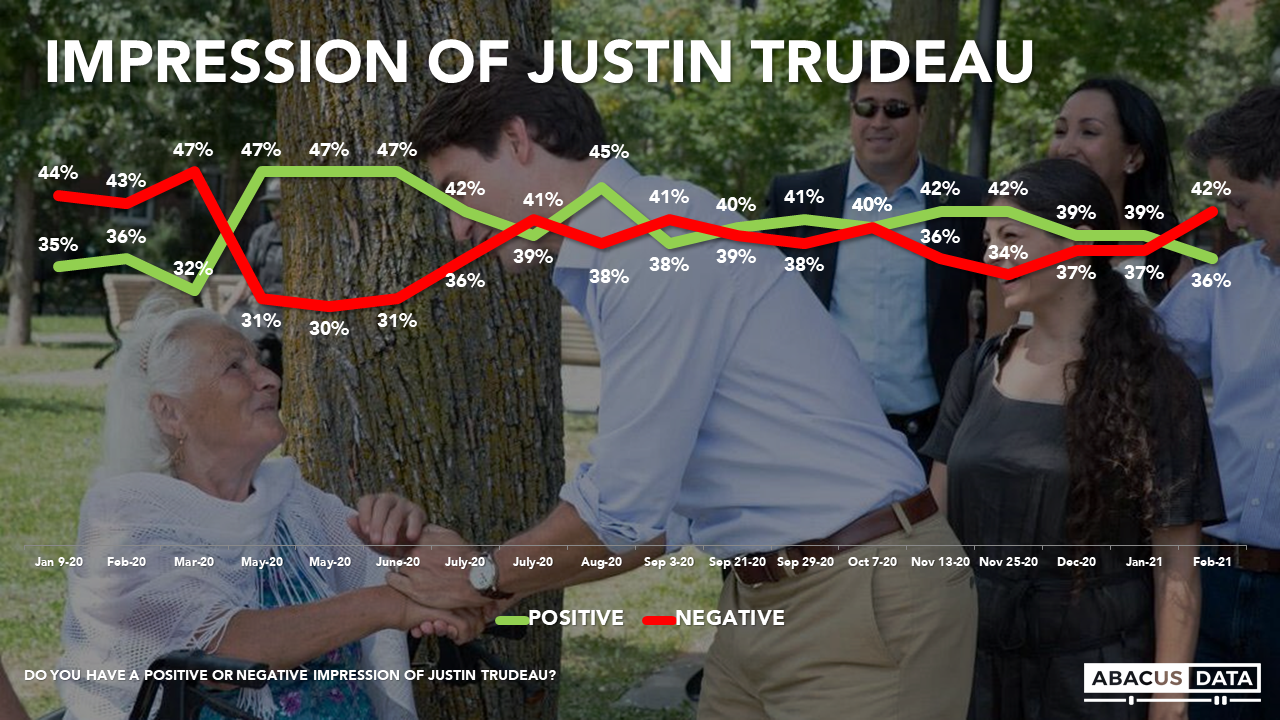 Conservative Leader Erin O’Toole’s negatives have also increased over this period. Today, 30% have a negative view of the Conservative leader while 20% view him positively. This is the highest negative number we’ve measured for Mr. O’Toole since we started tracking his public image. 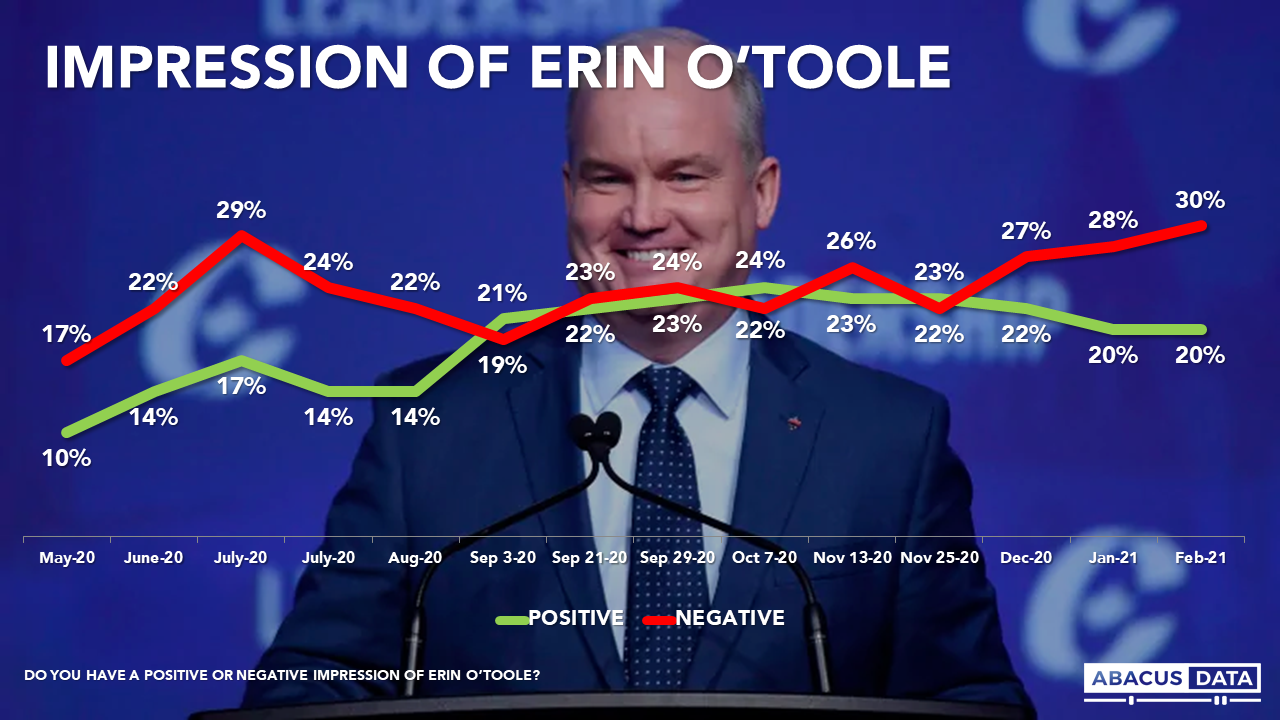 For Mr. Singh, impressions of him have remained relatively consistent over time. One in three Canadians has a positive view of the NDP leader compared with 24% who view him negatively (a slight increase of 3-points since last month). 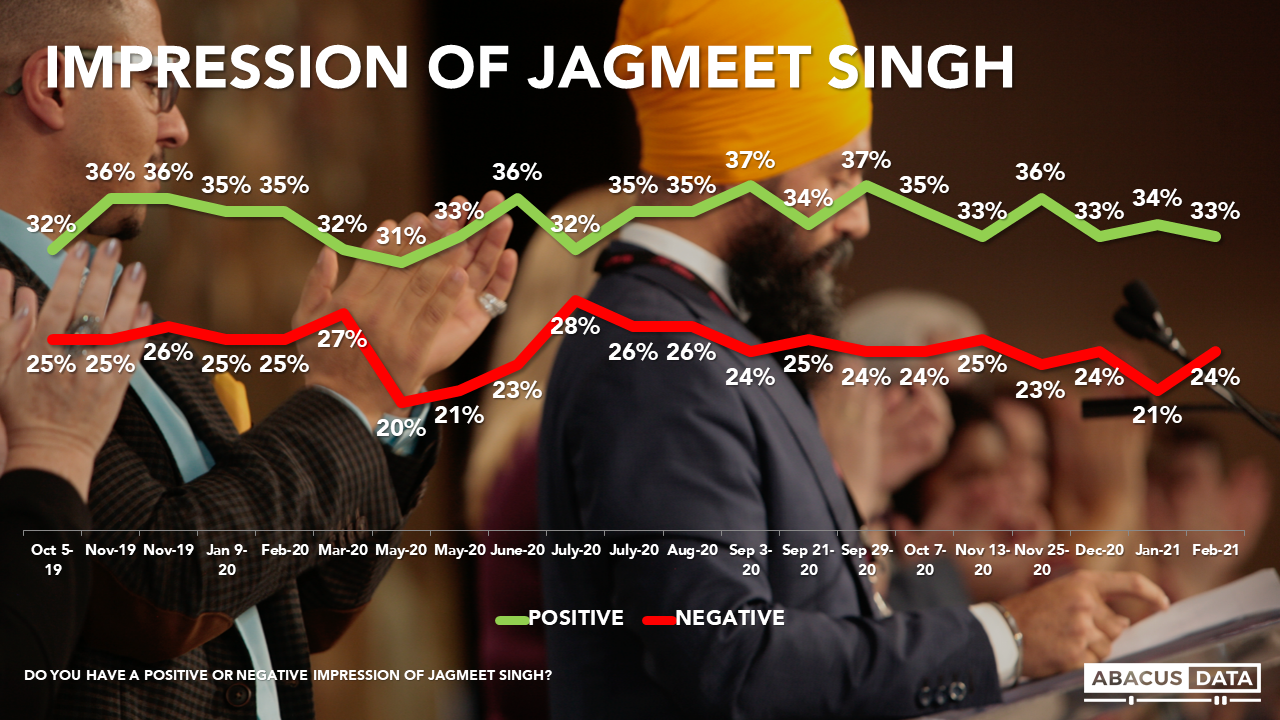 Our survey also asked respondents to rate the federal and provincial governments’ performance on a series of COVID-19 related areas. We asked the same set of questions on a survey in mid-January.

The public’s evaluation of the federal government’s performance in all areas has weakened, with the greatest shift in its handling of vaccines. While most Canadians continue to give the government positive or mostly positive assessments of its handling of the vaccine procurement and rollout, the delays and vaccine shortages over the past few weeks have come at a cost.

Today, 25% think the federal government is doing an excellent or good job ordering the vaccines that Canadians needed while 33% think it is doing an acceptable job. Over 4 in 10 give the government negative marks, an increase of 19-points since mid-January.

We find a similar shift in views on the government’s performance getting vaccines in as timely a fashion as possible. On this measure, positive assessments are down 7-points (21% say excellent or good), while negative reviews are up 17%.

In other areas of its COVID-19 response, the federal government continues to get strong assessments in how it shares information, supports the economic needs of Canadians, and supports the provincial governments. 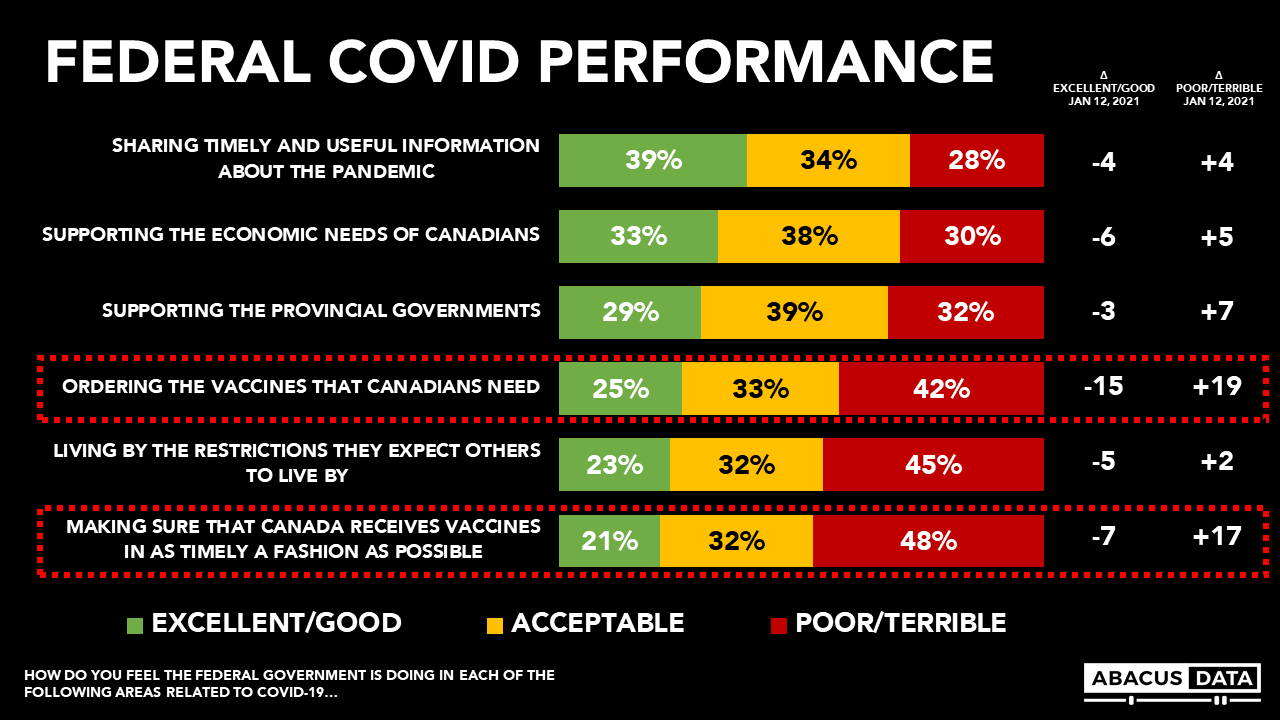 The political risk for the Liberal government on the vaccine rollout becomes apparent when you consider that about 1 in 3 2019 Liberal voters give the Liberals negative ratings on its vaccine performance thus far. While most of these respondents haven’t shifted their voting preferences, it has caused a softening of their impressions towards the government, the Prime Minister, and the Liberal Party. We find downward pressure on all of these core measures, 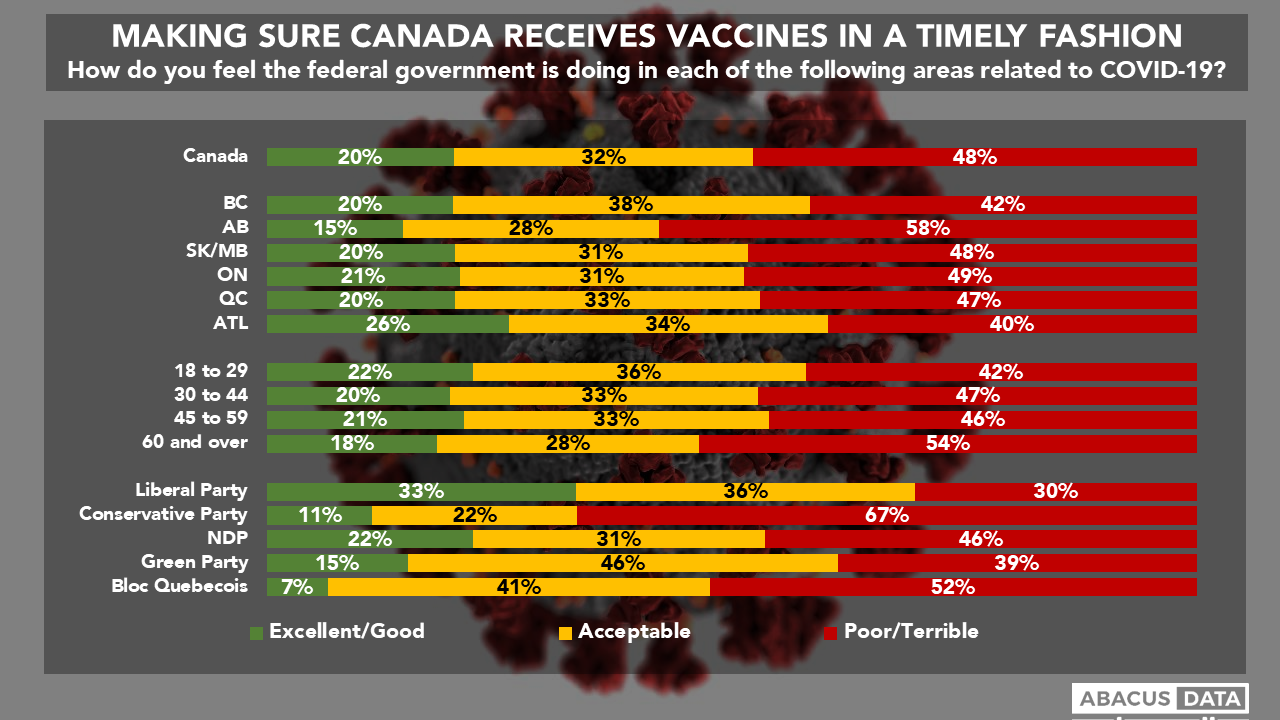 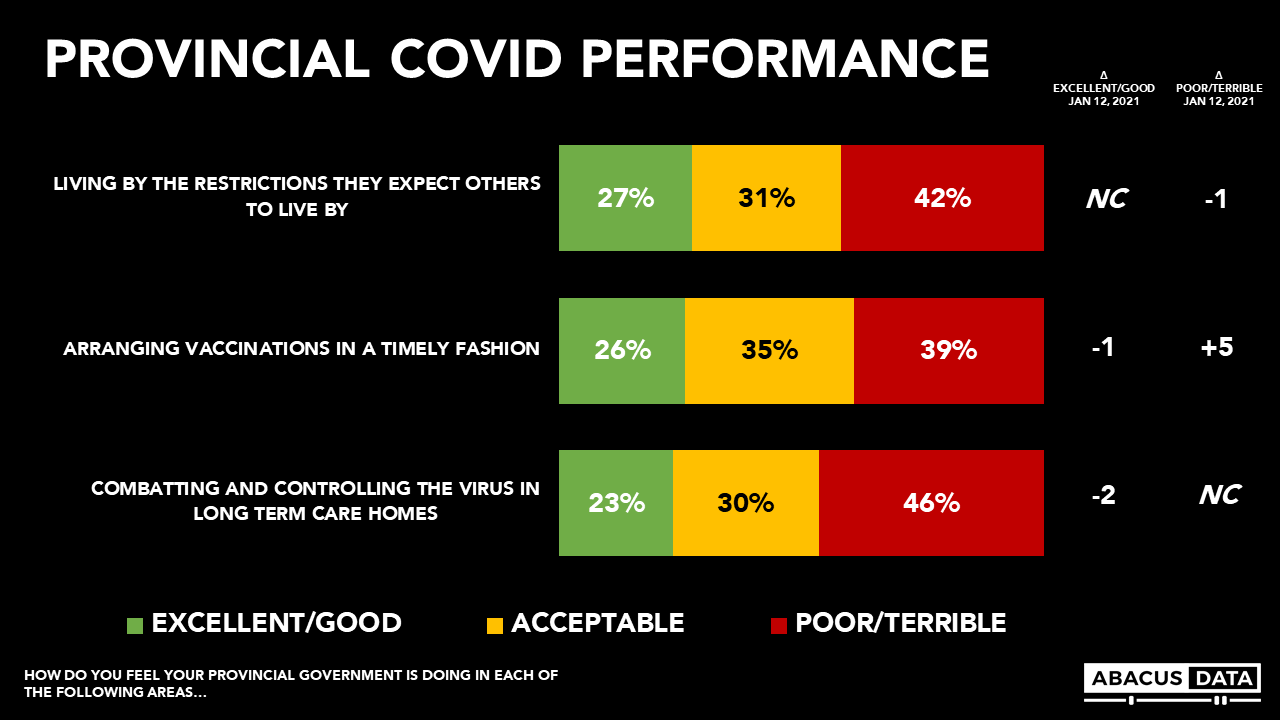 When it comes to vaccination rollout at the provincial level, we find those in the Prairies and Ontario to have more negative assessments of their provincial governments than those in Atlantic Canada, Quebec, or BC. 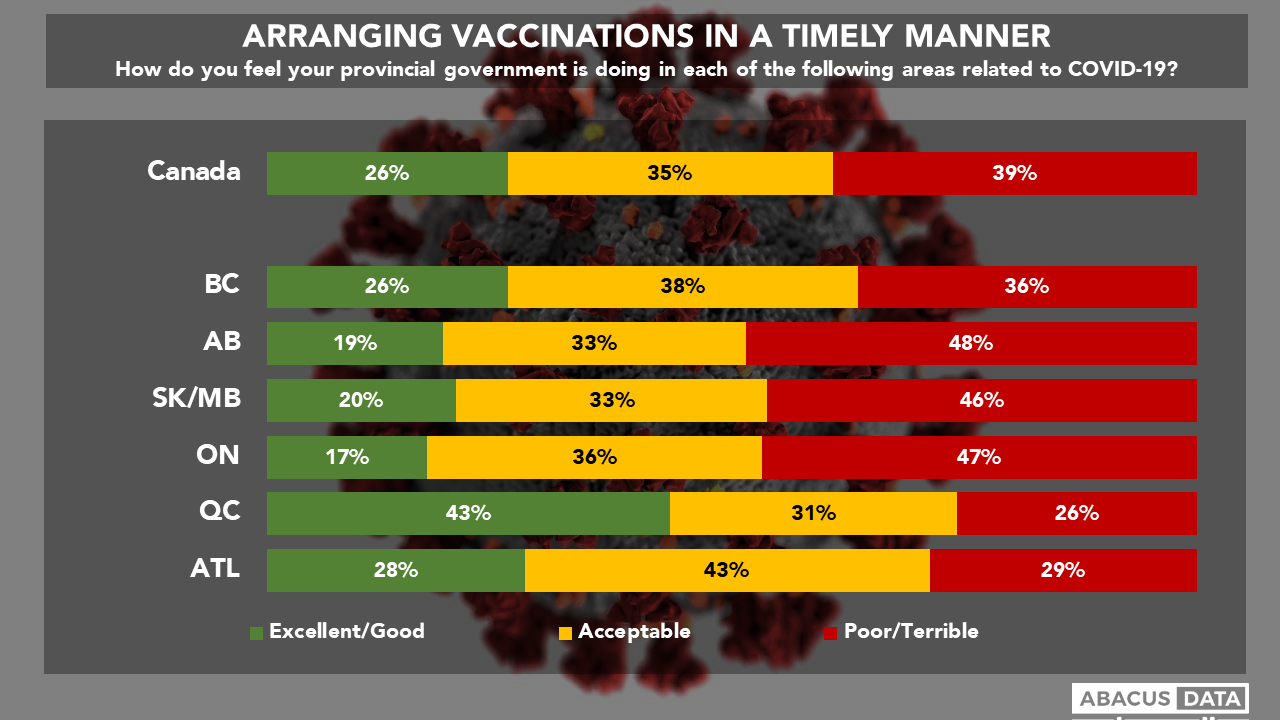 According to Bruce Anderson: “Now that vaccines are being shipped and administered, a great deal of coverage and public interest has been devoted to the question of how quickly how many doses will be available in Canada. Stories about competition for doses, production delays, and the sense of uncertainty this leads to are naturally creating some degree of frustration and anxiety.

Whether it will carry a political price for the government is, to my eyes, too early to tell – since vaccinations weren’t available only weeks ago, and most people had expectations that were for being vaccinated in the second and third quarters rather than earlier. For now, the question is measuring confidence or a lack of confidence in the vaccine program. That confidence has come under pressure as unexpected delays crashed into the sense of relief and enthusiasm people were starting to allow themselves to feel.”

According to David Coletto: “Delays in the delivery of vaccines appear to have hurt the Liberals. Government approval, the Prime Minister’s image, and vote share are all down over the past few weeks. Simultaneously, negative perceptions of the government’s handling of the vaccination file have risen sharply.

These shifts underscore the political risk in the vaccine rollout. It is putting pressure not only on the federal government but provincial governments as well. For the first time since the pandemic started, as many Canadians disapprove of the federal government’s performance as approve – a signal that the relentless focus on vaccinations, delays, and procurement has hurt the governing Liberals.

But at the same time, none of the opposition parties seemed to benefit from all of this. Mr. O’Toole’s negatives increased over the same period, and the Conservative vote share didn’t budge an inch. Mr. Singh and the NDP have seen a small uptick in support but nothing that fundamentally changes their position vis-à-vis the Liberals.

It is still early in the vaccine rollout, and perceptions can change as more vaccines arrive in Canada. But this snapshot gives us insight into the politics of vaccinations and the political cost to those perceived to be failing to meet expectations.”

The survey was conducted with 3,930 Canadian adults from January 29 to February 3, 2021. A random sample of panelists were invited to complete the survey from a set of partner panels based on the Lucid exchange platform. These partners are typically double opt-in survey panels, blended to manage out potential skews in the data from a single source.

The margin of error for a comparable probability-based random sample of the same size is +/- 1.6%, 19 times out of 20. 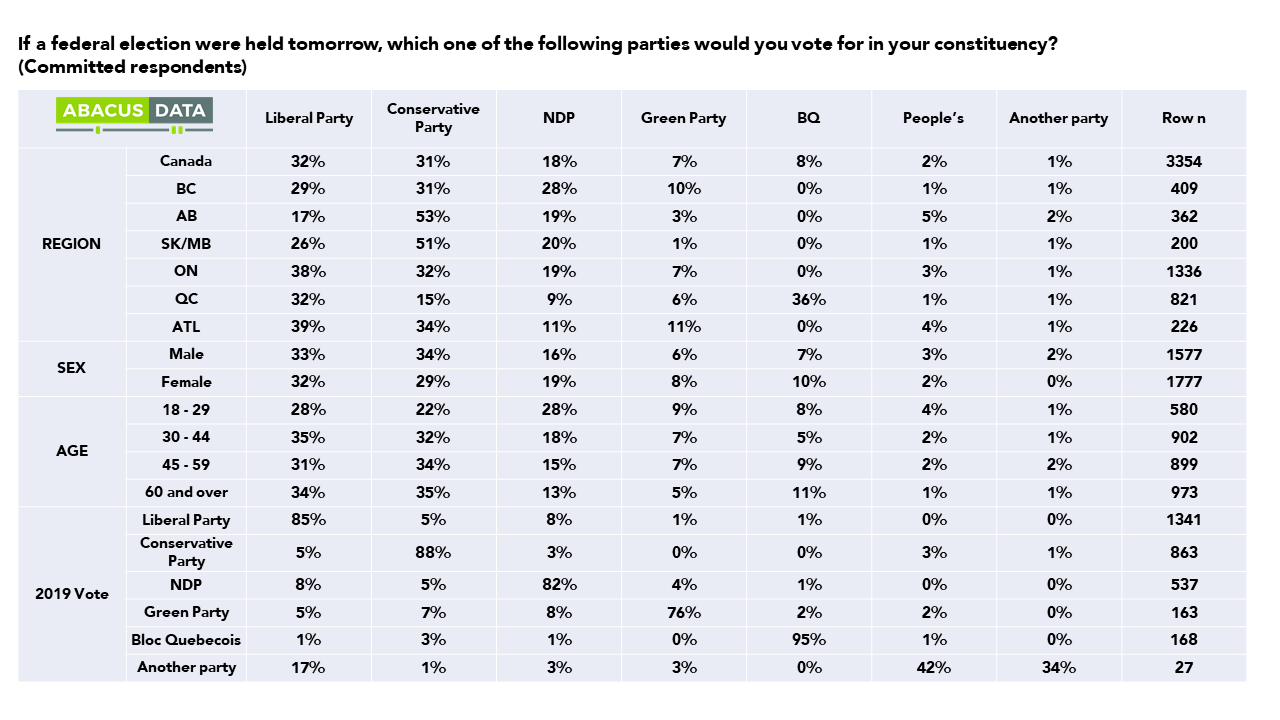 One thing COVID-19 isn't doing? Widening partisans divisions in Canada
Arts and culture during a pandemic and what will come next
Conservatives and Liberals end 2014 neck and neck as Harper's personal numbers improve
Tags: Canadian politicsCOVID-19Erin O'TooleJagmeet SinghJustin Trudeau