We just completed a national survey of 1,981 Canadian adults (from April 9 to 14). Here’s what the survey found: 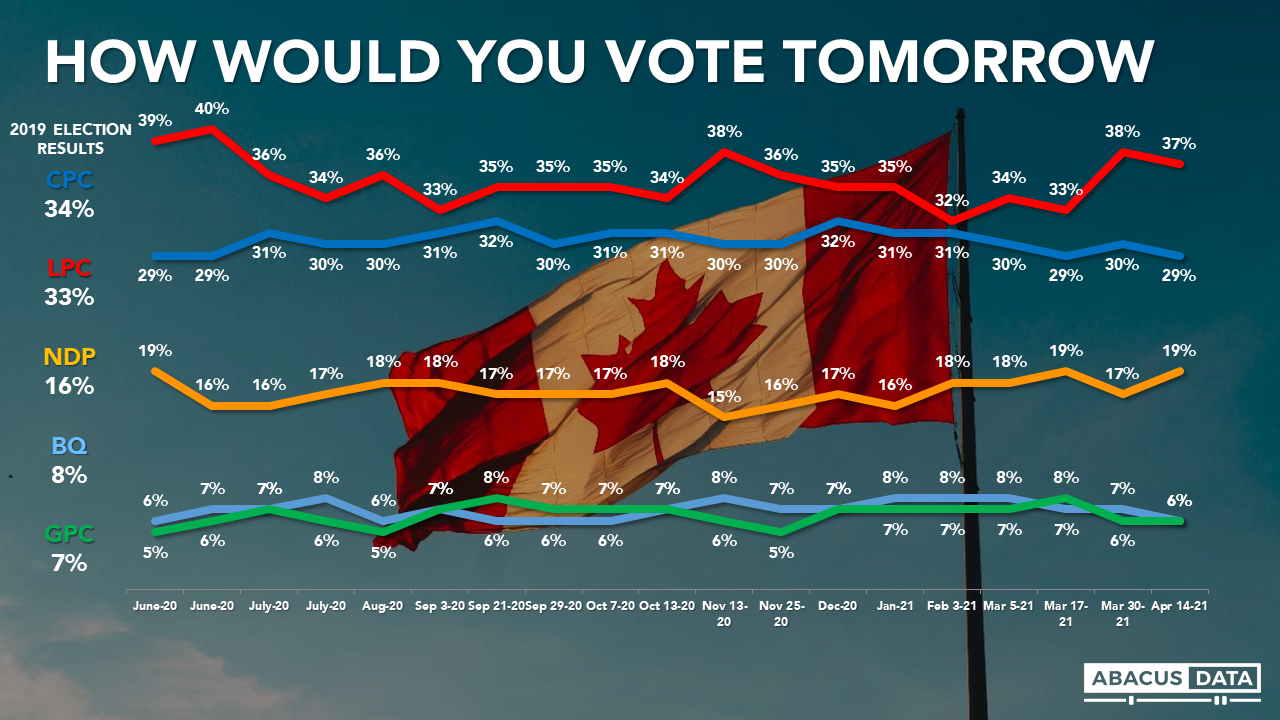 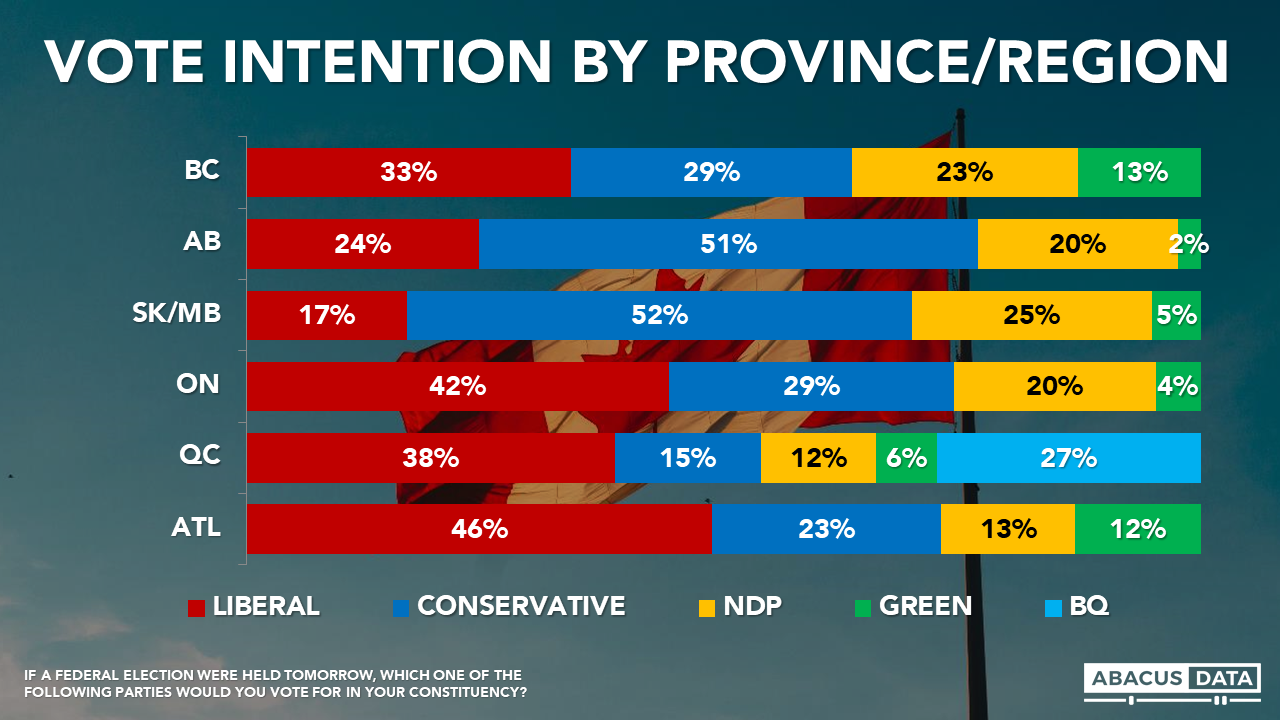 Compared to the results in our last wave of surveying we see a modest improvement for Mr. Singh and no statistically significant change for the other two party leaders. 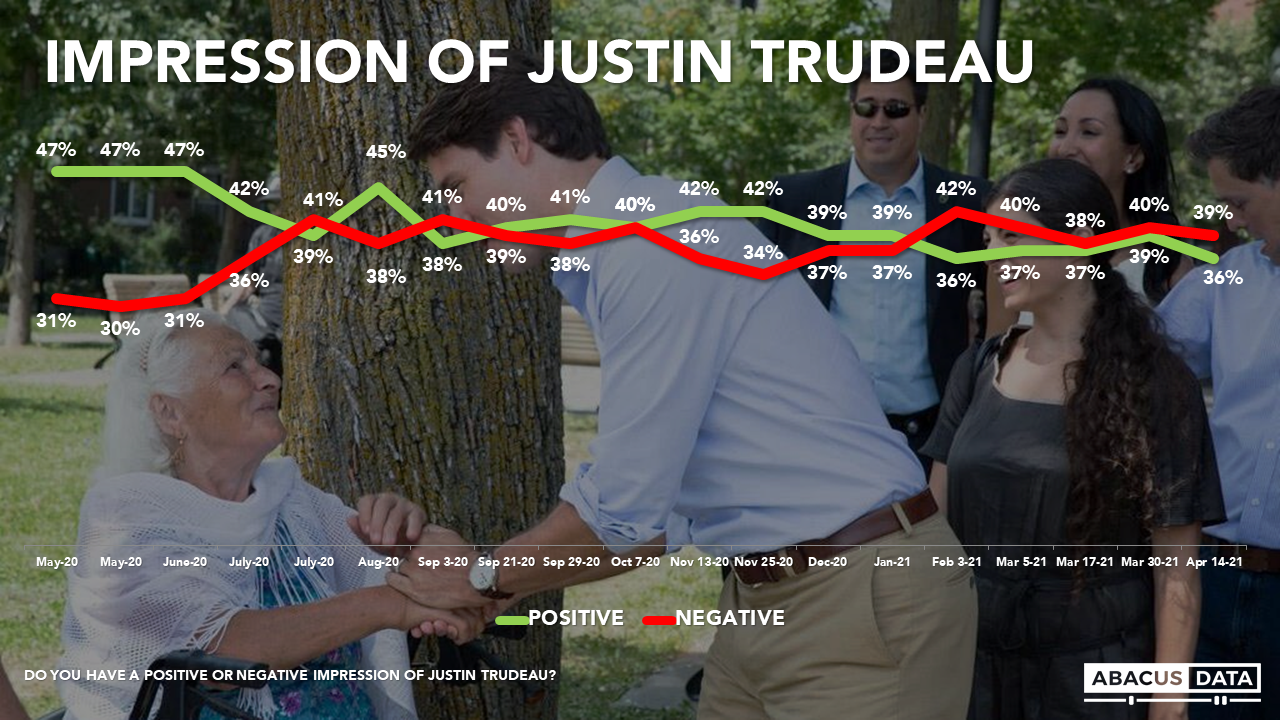 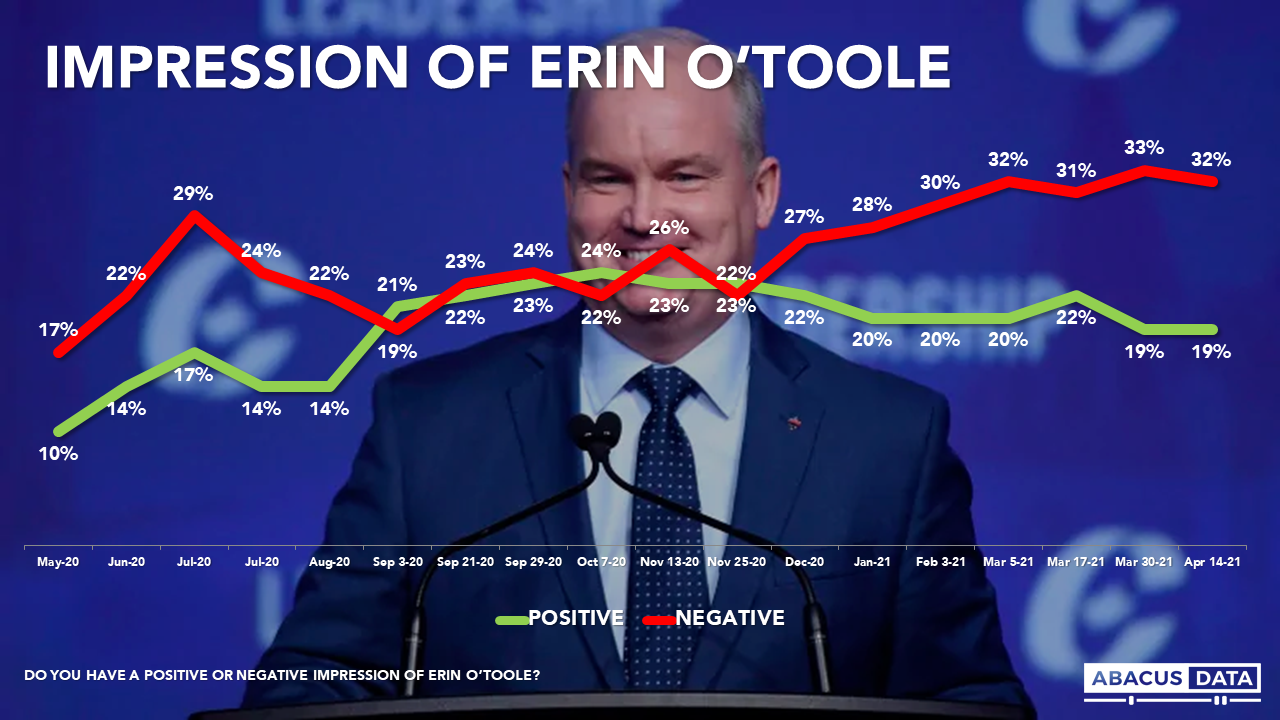 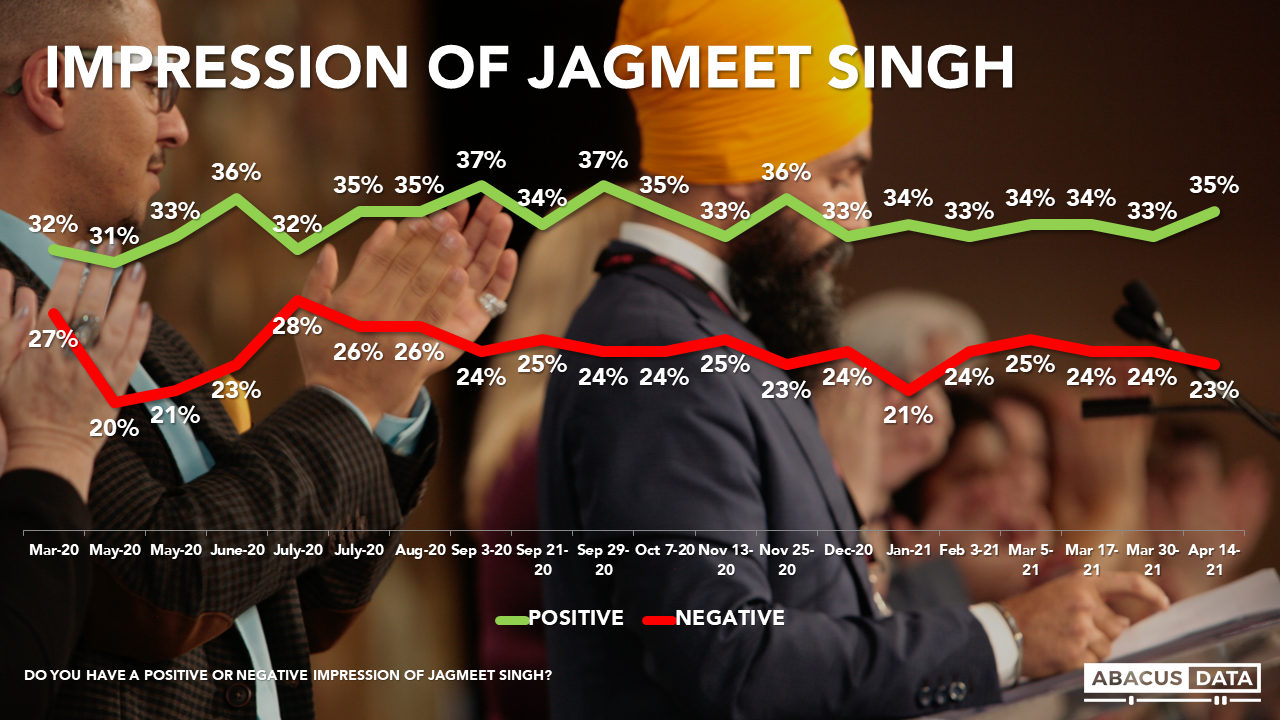 Today, 39% of voters say it’s definitely time for a change in government. Another 26% say “it would be good to have change but doesn’t matter to me that much”. This total of 65% who would prefer to see a change is 4 points less than at the time of the last election, and the intensity of the desire for change is 13 points lower.

In total, 34% say they prefer the Liberals to be re-elected, 3-points higher than at the end of the 2019 election campaign. 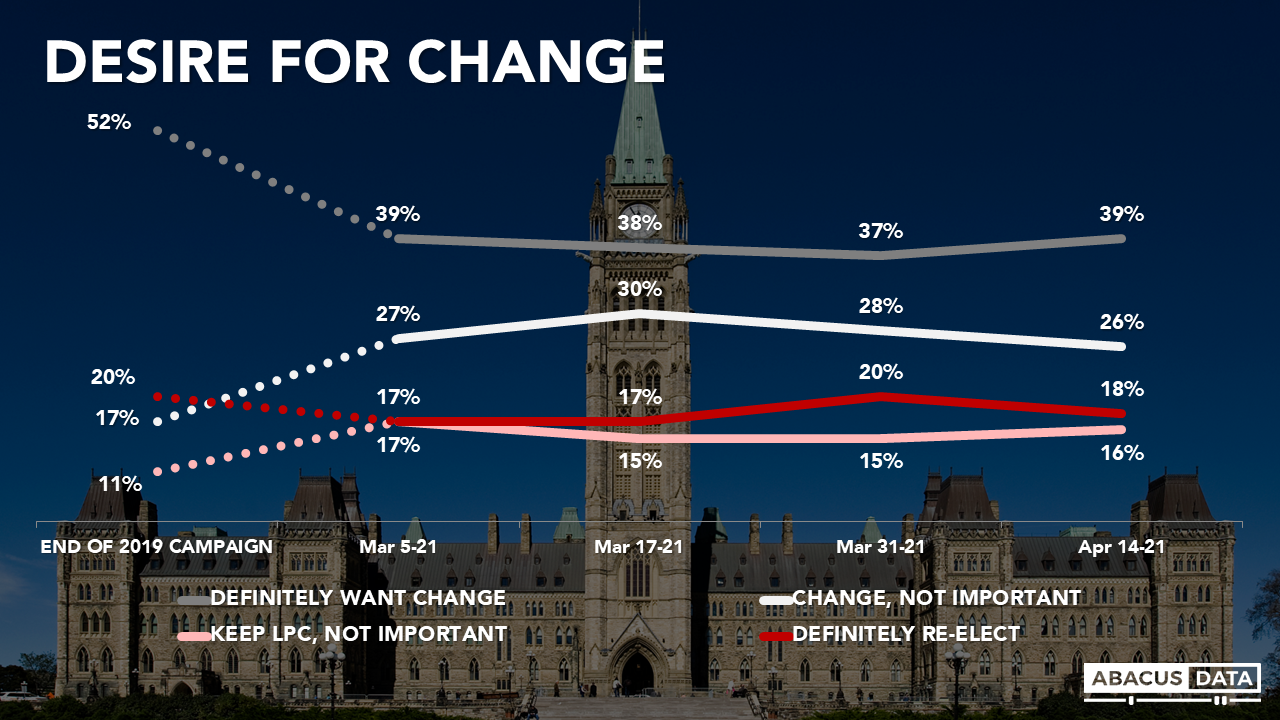 Among the 39% of respondents who definitely want change, the Conservatives would win just over half of those votes (55%) with the rest splitting this way: 21% NDP, 7% Green, and 7% BQ.

Among the 26% of respondents who have a softer preference for a change, the NDP (29%) would win a bigger share of those votes than the Conservatives (21%), the Green Party (11%) and the BQ (9%). While expressing a preference for a change in government, 28% would Liberal given the alternatives as they see things today.

Concern about the pandemic is growing again, as new daily case counts, ICU patients, and lockdowns impact much of the country. Forty-three percent (43%) say over the past few days they have become more worried (up 9 since the end of March and up 18 since early March). 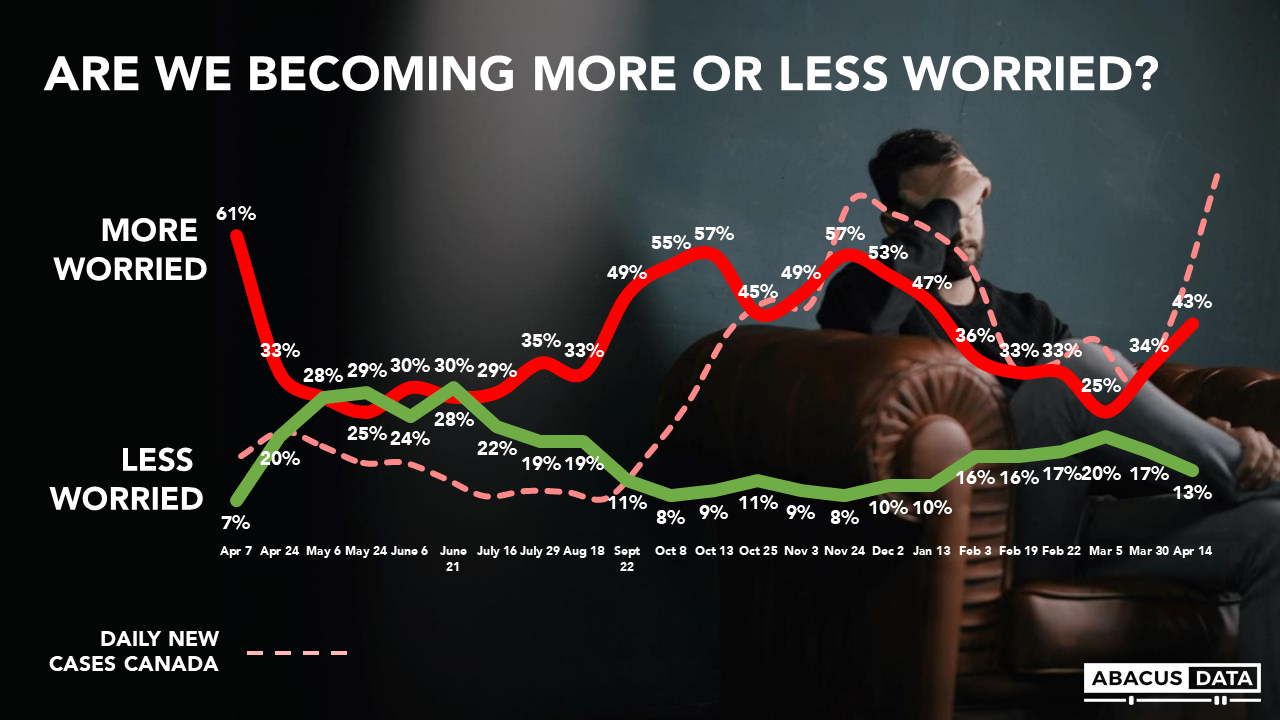 Since early March, concern about getting COVID personally is up 3-points, worries about there not being enough hospital beds if needed is up 8-points, and concerns about new strains spreading is up 6-points.

Also of note, 38% of those who have received at least one vaccine shot say they are worried about getting COVID themselves.

With the evidence of risk that younger people face with the new variants, concern about getting COVID is now highest among those aged 18 to 29. 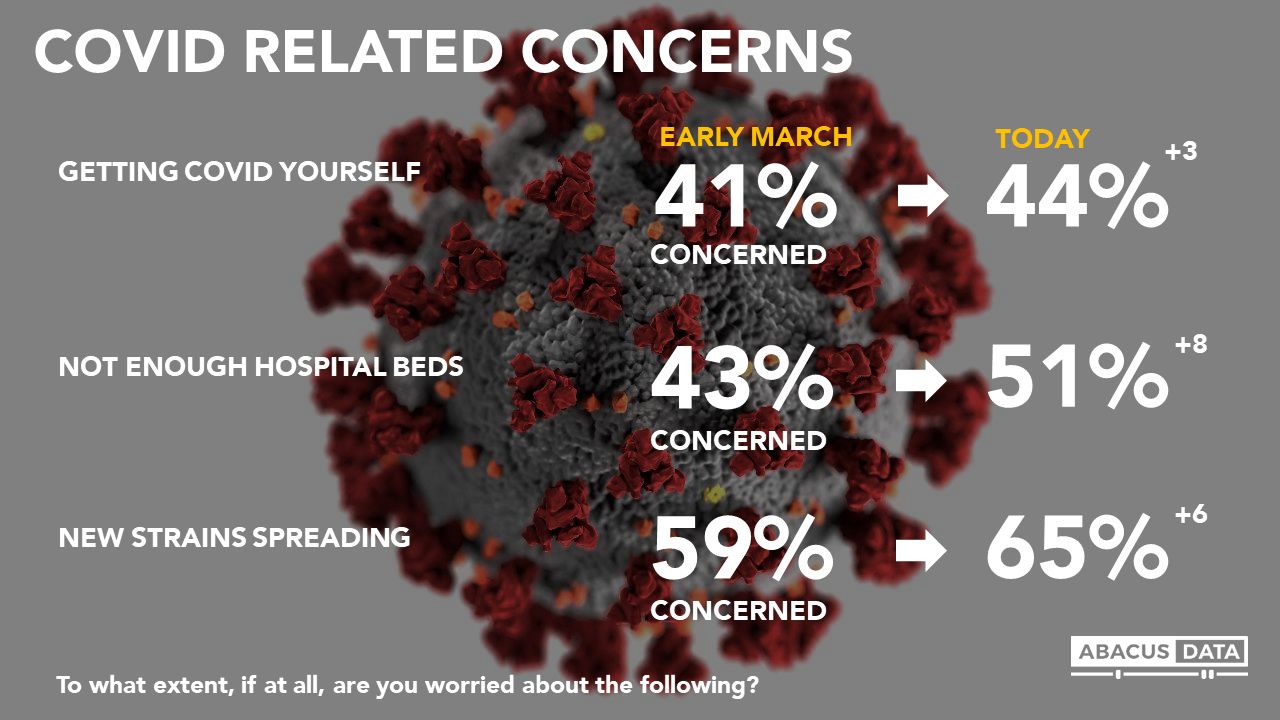 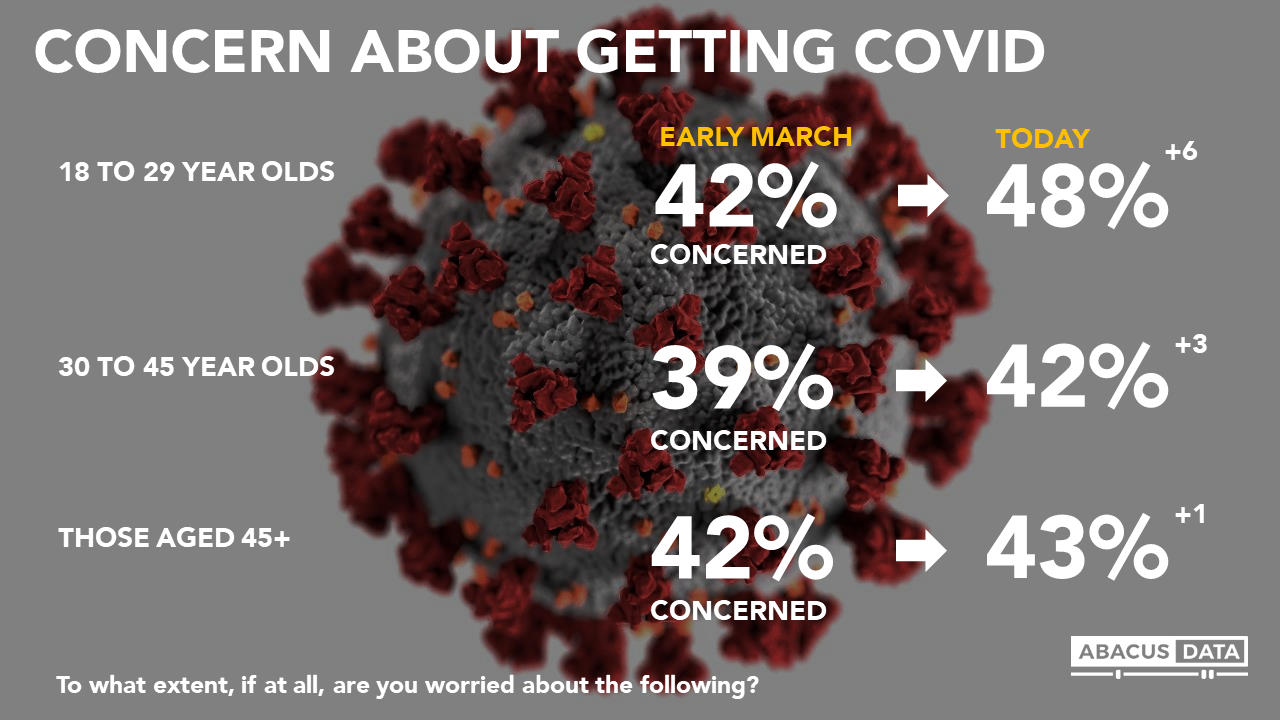 According to Bruce Anderson: “Pandemic not politics – that’s the public expectation in terms of the focus of political leaders right now. A tired and anxious population is unlikely to show any signs of happiness during this latest wave, realistically, we are more measuring levels of frustration and impatience than appreciation and support. Within that context, the federal government is – if not pleasing many – not driving voters away.

Despite the economic, health and other challenges brought on by the pandemic, the Conservatives have – so far – failed to make the case that changing governments is urgent or that they would do a better job than the Liberals. In some ways, the bigger risk for Mr. Trudeau is bleeding of support to the NDP, whose leader has little scar tissue and who may be able to take advantage of the unique circumstance where every social program can seem more important, urgent and affordable. As the federal budget looms, this may be the more important battleground to watch than the one featuring the Liberals and Conservatives.”

According to David Coletto: “As we head towards Canada’s first COVID budget, the public’s mood has become far more anxious and concerned about the pandemic. Despite about 1 in 4 Canadians receiving at least one shot of a vaccine, fear about getting the virus is higher than it was in early March.

Although people’s views on the pandemic have shifted over the past few weeks, we find stability in our political outlook. The Liberals continue to hold a sizeable 8-point lead over the Conservatives. The federal government’s handling of the pandemic remains generally positive although frustrations about the speed of vaccinations are rising with both the federal and provincial governments.

The desire for change remains largely unchanged from our last wave which is making it difficult for either Erin O’Toole or Jagmeet Singh to gain any traction. For Mr. O’Toole, he remains the most unpopular leader in the country – as measured by his net approval. For Mr. Singh, the country’s most popular leader – solid images in BC, Ontario, and Atlantic Canada have not translated into increased support.

However, Mr. Singh’s popularity is worth keeping an eye on. A big mistake by Mr. Trudeau or a poor public reaction to next week’s budget could create an opportunity for Mr. Singh and the NDP to seize on. But until more people feel that a change in government is really needed, getting people to give the NDP a look will be a challenge.”

Interested in an exclusive polling brief after the federal budget? Find out more

The survey was conducted with 1,981 Canadian adults from April 9 to 14, 2021. A random sample of panelists were invited to complete the survey from a set of partner panels based on the Lucid exchange platform. These partners are typically double opt-in survey panels, blended to manage out potential skews in the data from a single source. 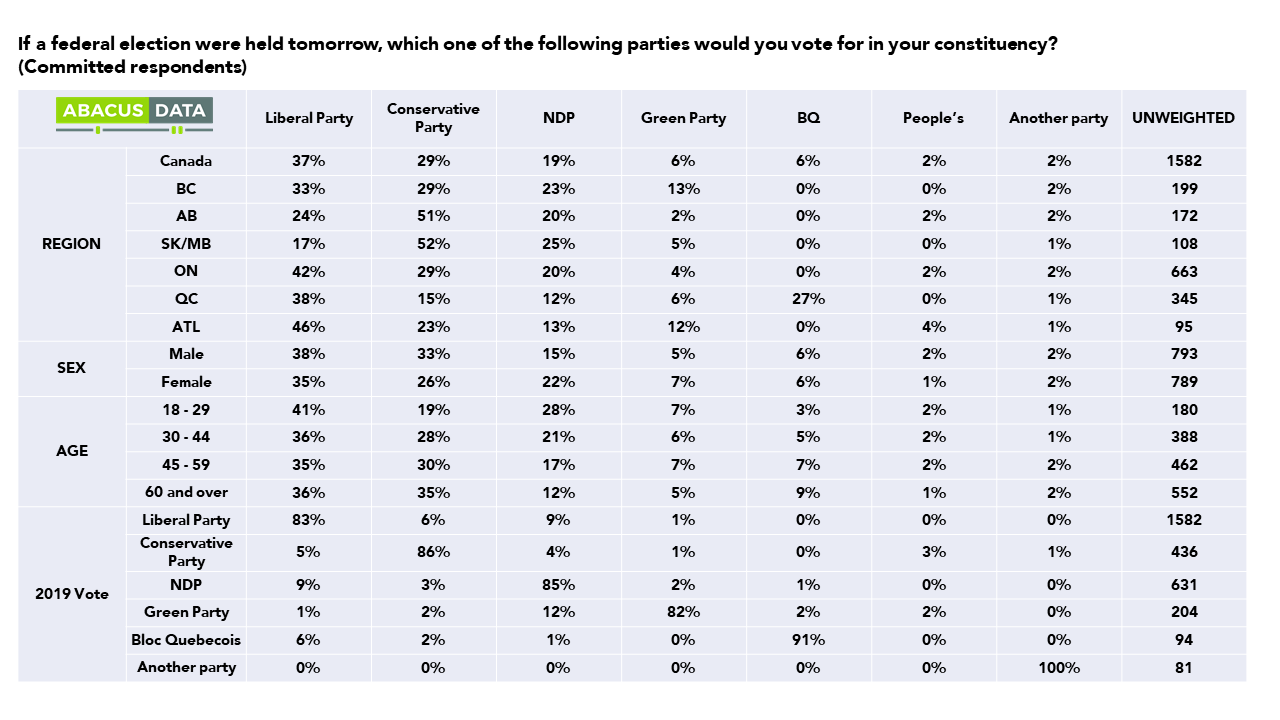 You vaxxed? Millions are asking each other and relationships might hang in the balance
2.4 million are vaccine “maybes”, another 2.4 million say “no”. More than 5 million doubt the second...
How Canadians view the federal party leaders
2021 is not 2019: Liberals well ahead as Conservative vote hits a new low
Liberal fortunes strengthen; Conservatives shed 5 points in a month