ABOUT 6 IN 10 APPROVE OF OTTAWA’S APPROACH TODAY

Given the health concerns and economic challenges facing the country, it is remarkable that satisfaction with the federal government’s performance has spiked upwards in our latest polling. But perhaps even more remarkable is that the divisions that marked polling in recent years are muted. People are more likely to share a common view than they were, and than might have been expected. 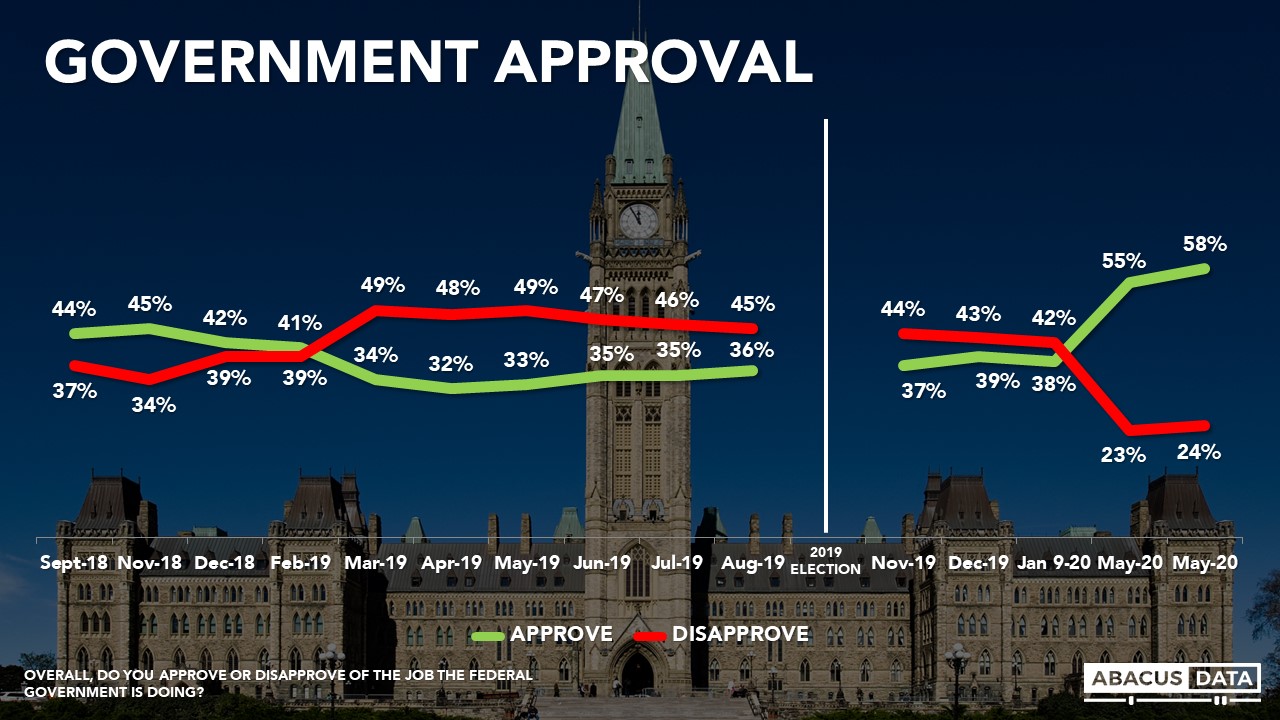 Majorities in all age groups approve of Ottawa’s performance. In each of the four most populous provinces, the plurality or majority view is approval: in Alberta, 46% approve and 39% disapprove. Remarkably, 3 in 10 Conservative voters say they approve of the Trudeau government’s performance. 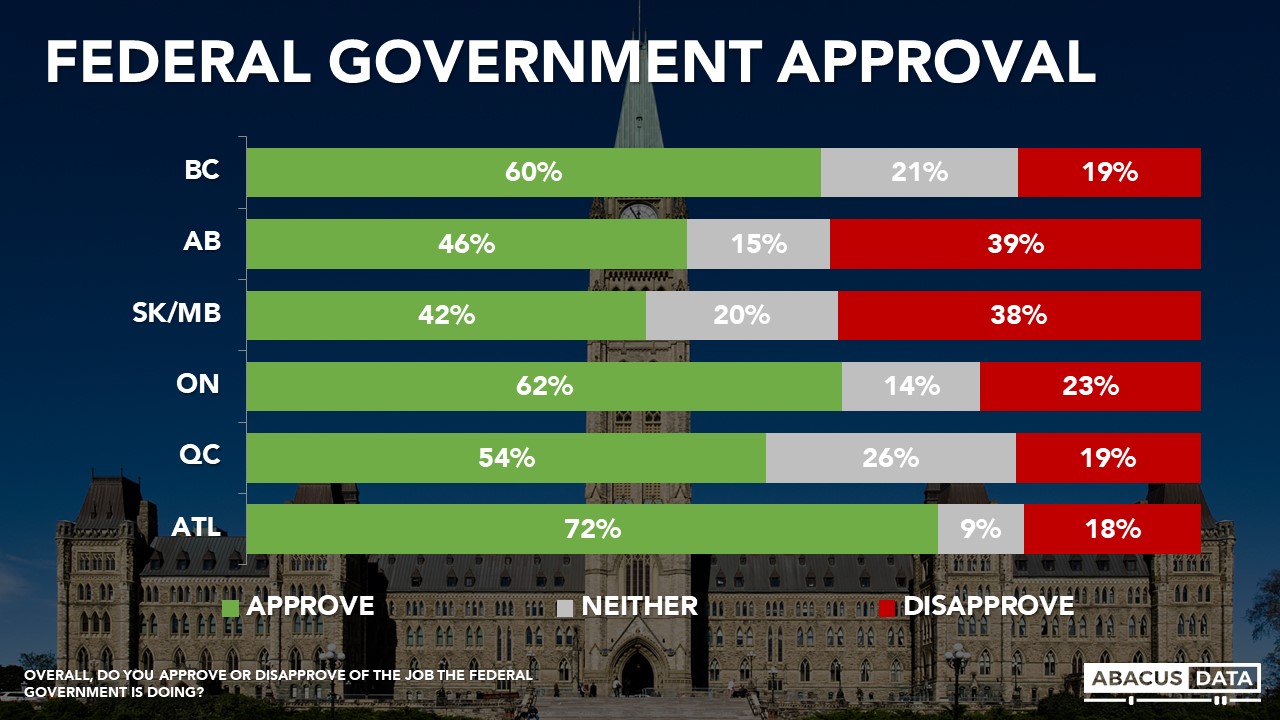 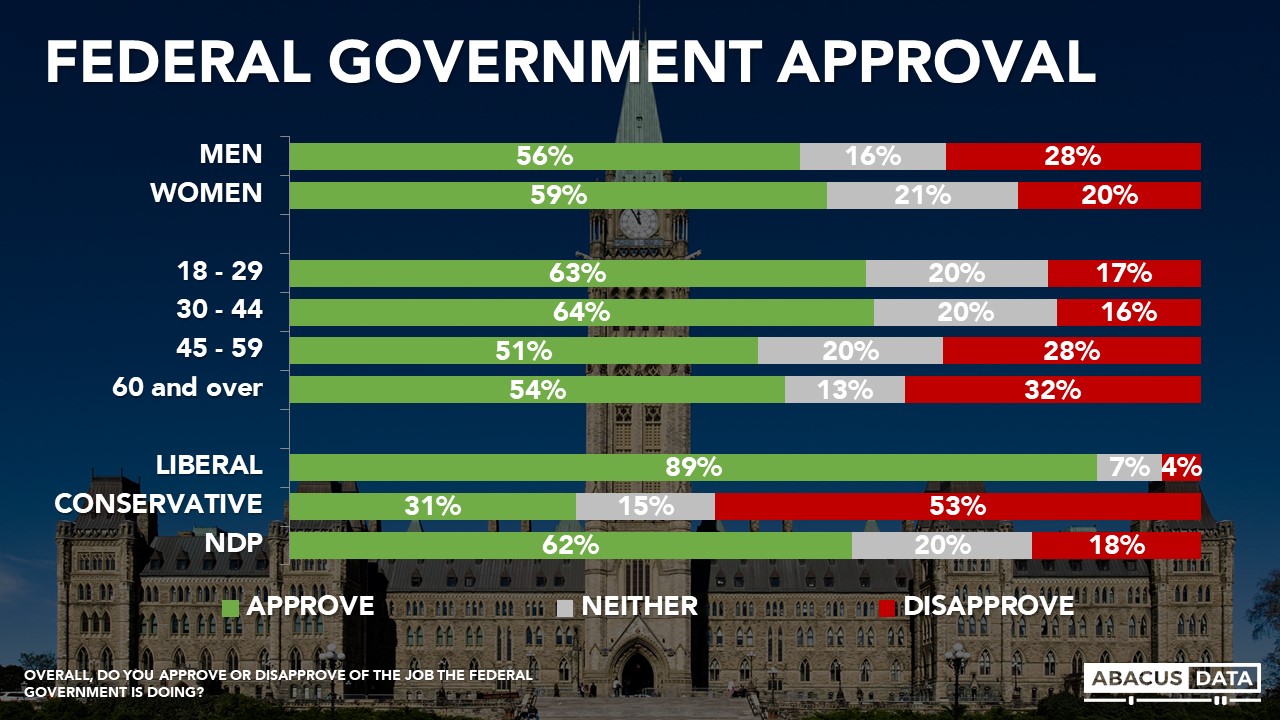 GOOD OR ACCEPTABLE RATINGS ON ALL 8 ITEMS TESTED

The strongest positive reactions to the choices made by the Trudeau government are for efforts to help those who are hurting due to the COVID19 pandemic. But more than 75% also give the government acceptable or good marks for communicating with Canadians, representing Canada internationally, handling relations with the USA, being accessible and accountable.

Despite high unemployment, 71% say the government is doing an acceptable or good job in handling the economy. And despite deficits soaring to unprecedented levels, only 38% give Ottawa a negative rating for fiscal matters. On climate change, only 28% express frustration. 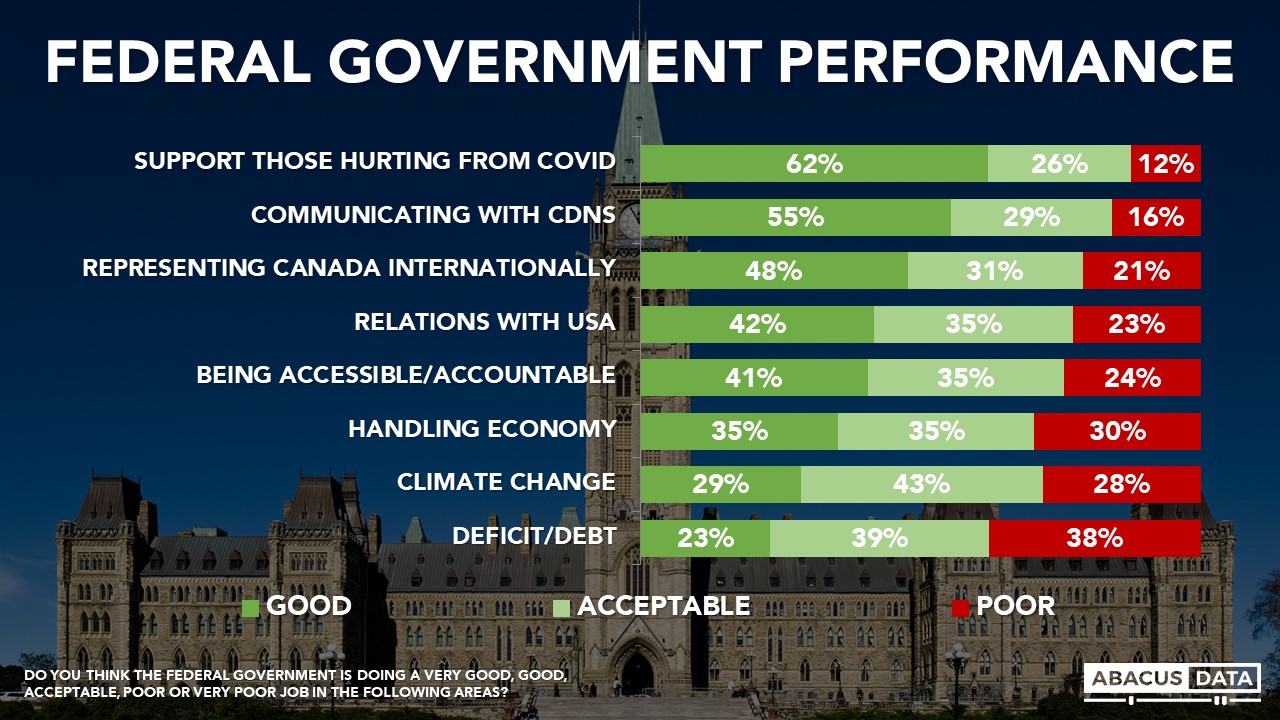 IS COVID19 DRIVING WEDGES OR BRINGING PEOPLE TOGETHER?

Among the more interesting findings in this polling during the COVID19 crisis is that differences by generation, region, partisanship seem to be softening rather than hardening. As the next several charts indicate:

• Majorities of all parties’ supporters give the government acceptable or good marks for handling climate change, one of the issues that tend to find strong pressures from both the left and right sides of the spectrum. In Alberta, despite Ottawa’s decision to press on with carbon pricing increase, only 33% register unhappiness with federal performance on this issue. 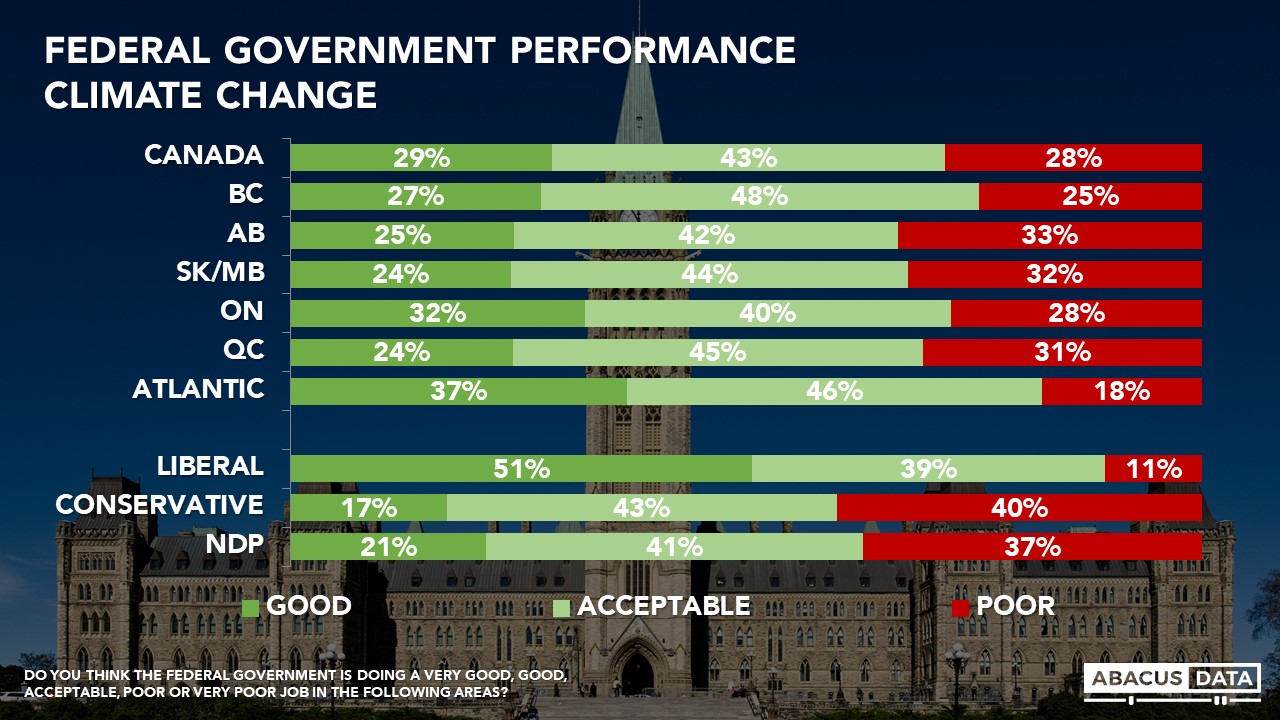 • On the economy, a major theme of the Conservative leadership candidates Peter MacKay and Erin O’Toole, only 55% of Conservative voters give the Trudeau government a failing grade right now. Only 40% of Alberta voters are critical of Ottawa’s economic approach. 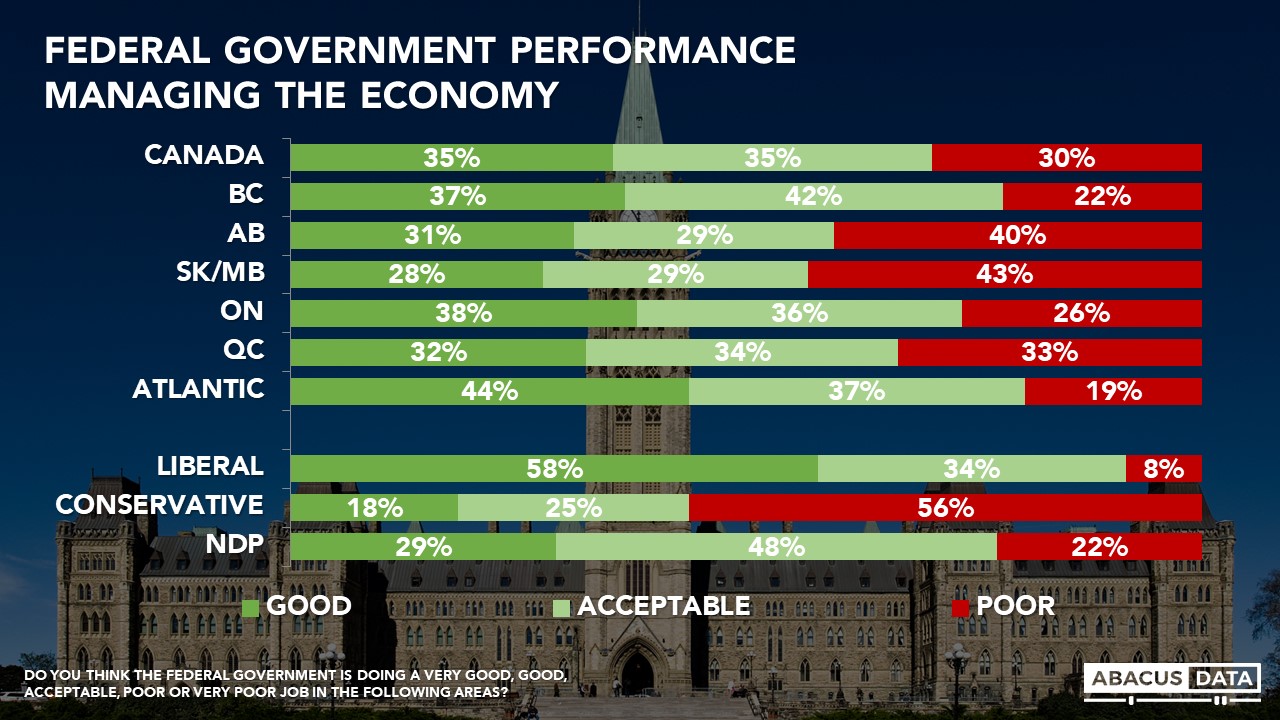 • The deficit does show strong differences along partisan lines, as is usually the case. However, a third of Conservative voters and half of Albertans give Ottawa a passing grade. 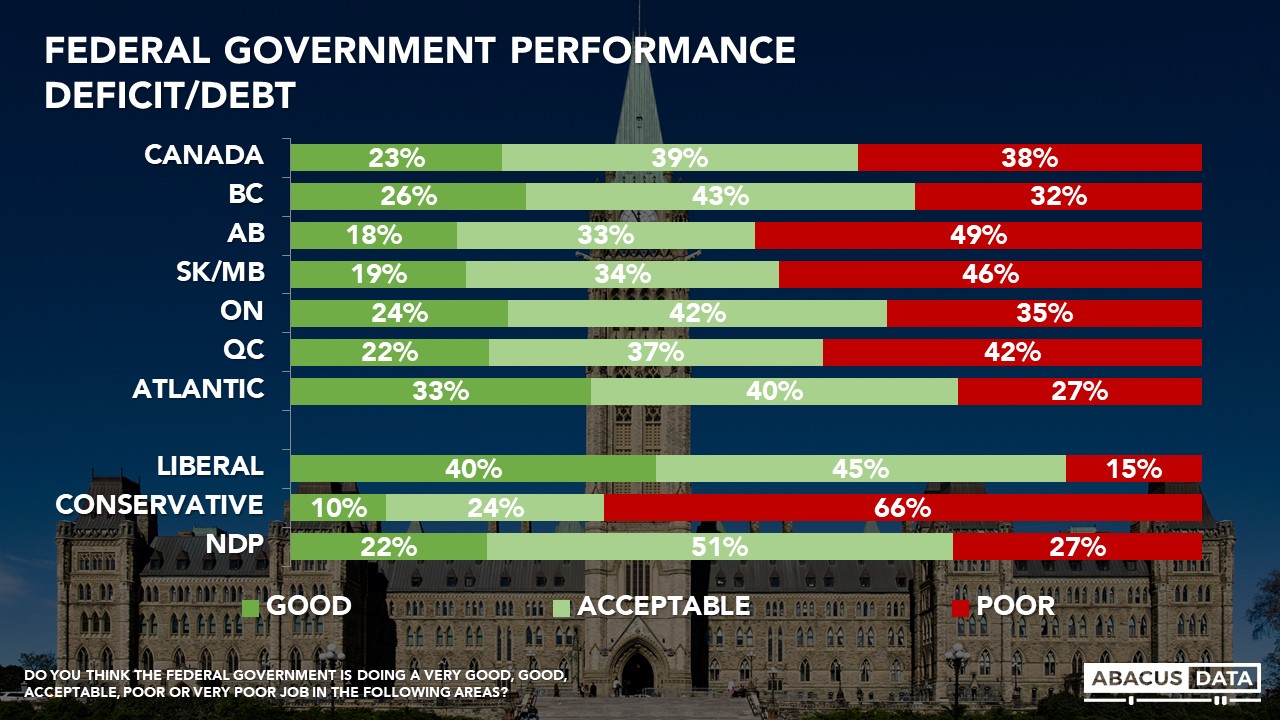 • The government’s response to helping people with needs around Covid19 is undoubtedly contributing significantly to this narrowing of divisions. Dissatisfaction on this point is only 12% nationally, only 24% among Conservatives and only 20% in Alberta. 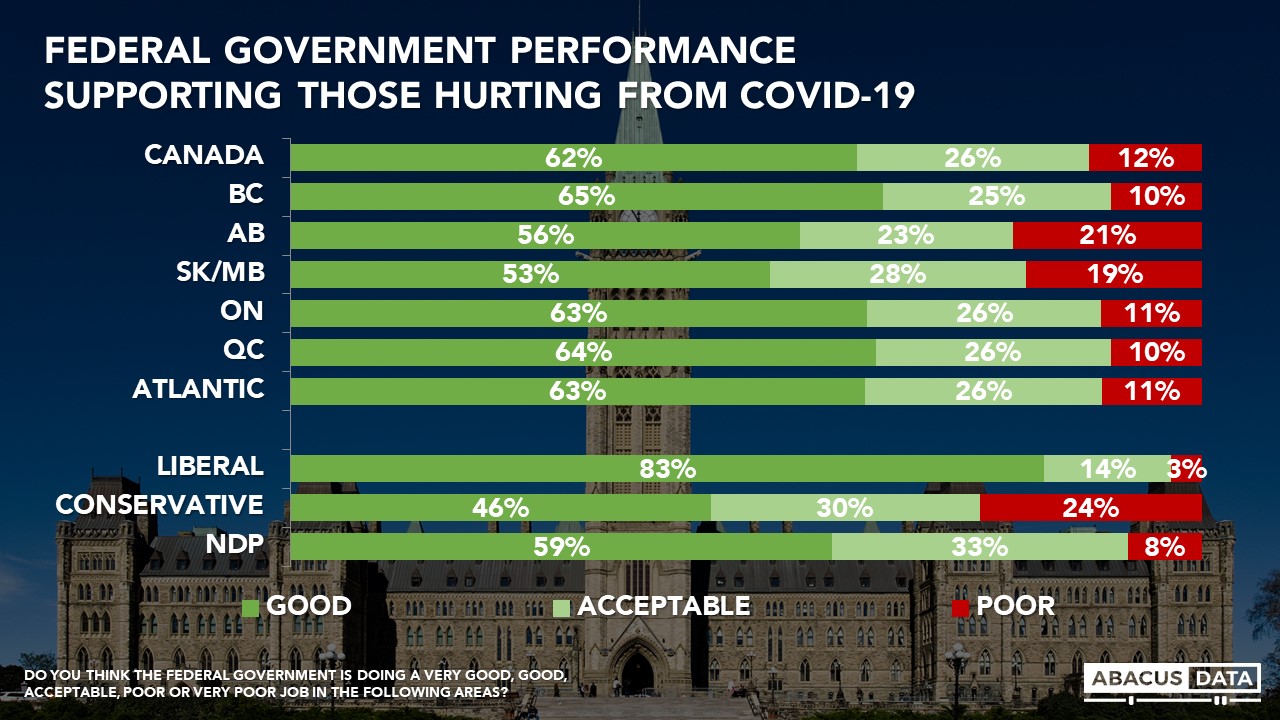 “Around climate, deficits, pipelines and several other issues, the last couple of years had been revealing deeper cracks within Canadian political sentiment. The scale and urgency of the COVID19 crisis could easily have exacerbated divisions. However, for the present anyway – it’s hard not to notice a reduced amount of friction and tension around the choices the federal government is making. People are prioritizing help with the economic and health aspects of the crisis and that in that context they are less inclined to be critical of the work of government on other files”.

The survey was conducted with 1,800 Canadian residents from May 14 to 17, 2020. A random sample of panelists were invited to complete the survey from a set of partner panels based on the Lucid exchange platform. These partners are typically double opt-in survey panels, blended to manage out potential skews in the data from a single source.

The margin of error for a comparable probability-based random sample of the same size is +/- 2.3%, 19 times out of 20.
The data were weighted according to census data to ensure that the sample matched Canada’s population according to age, gender, educational attainment, and region. Totals may not add up to 100 due to rounding.