Our latest national polling data shows that an election held today would see the Liberals with 35% support (unchanged from last month), the Conservatives at 31%, the NDP at 17% and the Greens at 6%. 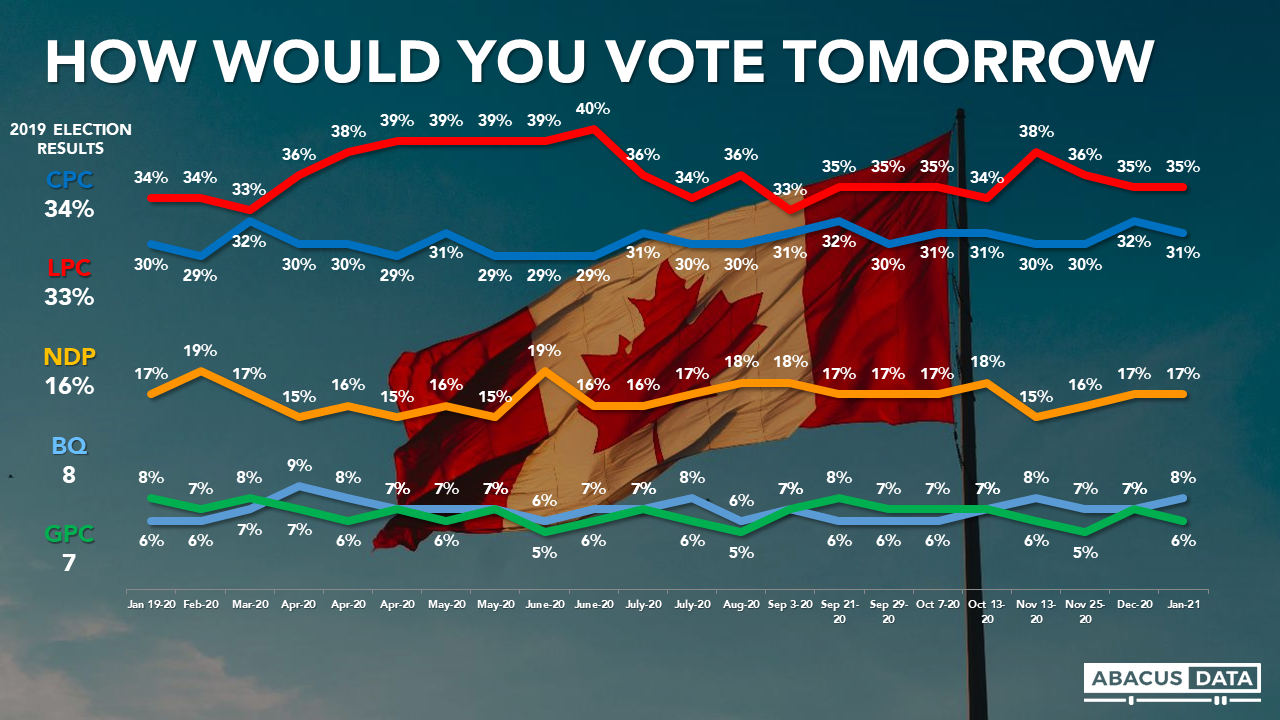 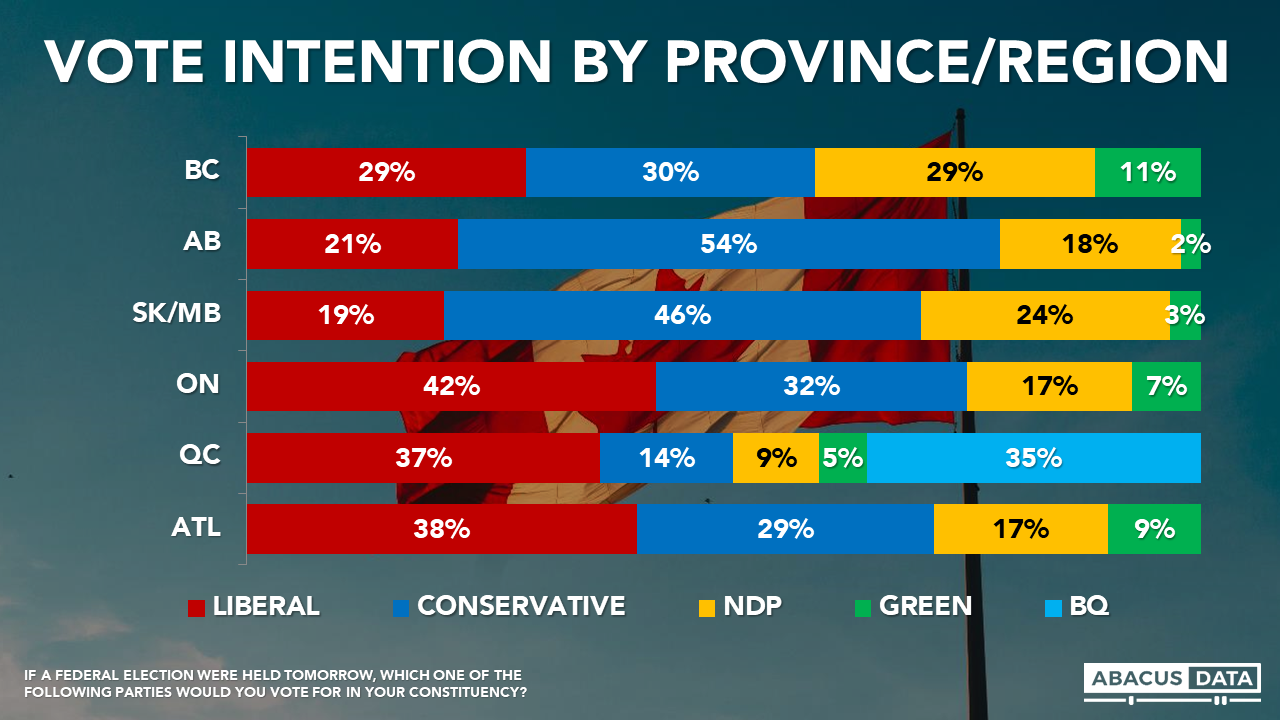 We also track the accessible pool of voters each major party has – that is, the percentage of Canadians who say they would consider voting for the party. Half of Canadians say they would be open to voting Liberal (53%), 8-points more than the Conservatives (45%) and 9-points more than the NDP (44%). The Liberals have consistently had more than half of the electorate open to voting for them while the Conservatives have ranged between 43% and 47% for all of 2020 and now into 2021. 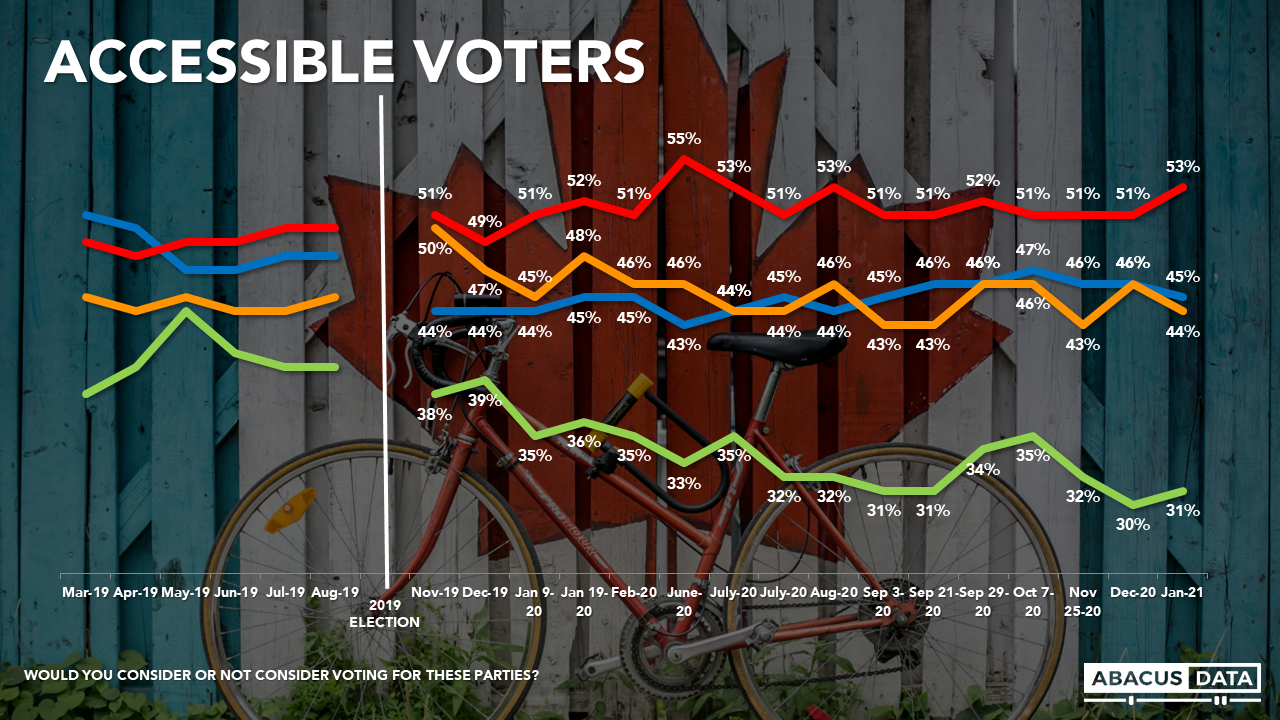 The federal government’s approval rating has held fairly steady for the past few months. Today, 44% approve while 36% disapprove, similar to what we found last month. Over 3 in 4 2019 Liberal voters approve of the government’s performance as do 1 in 5 Conservative voters, 42% of NDP voters, and 37% of Green voters. 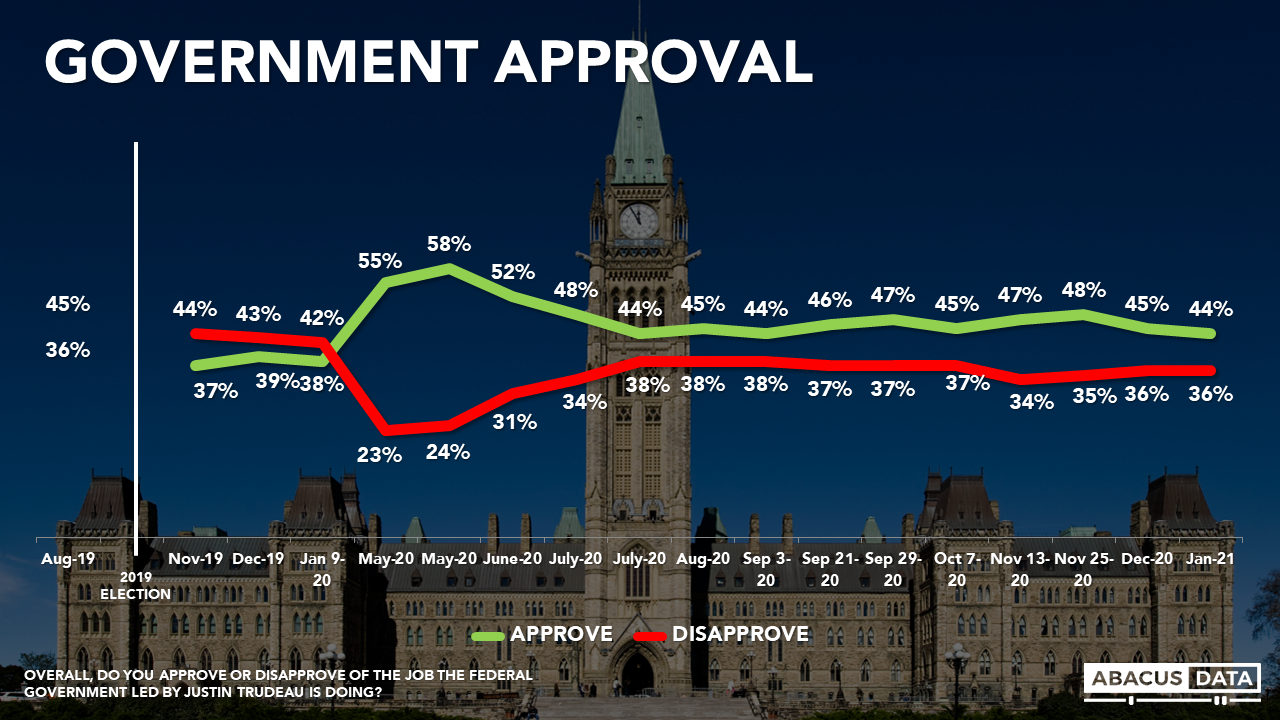 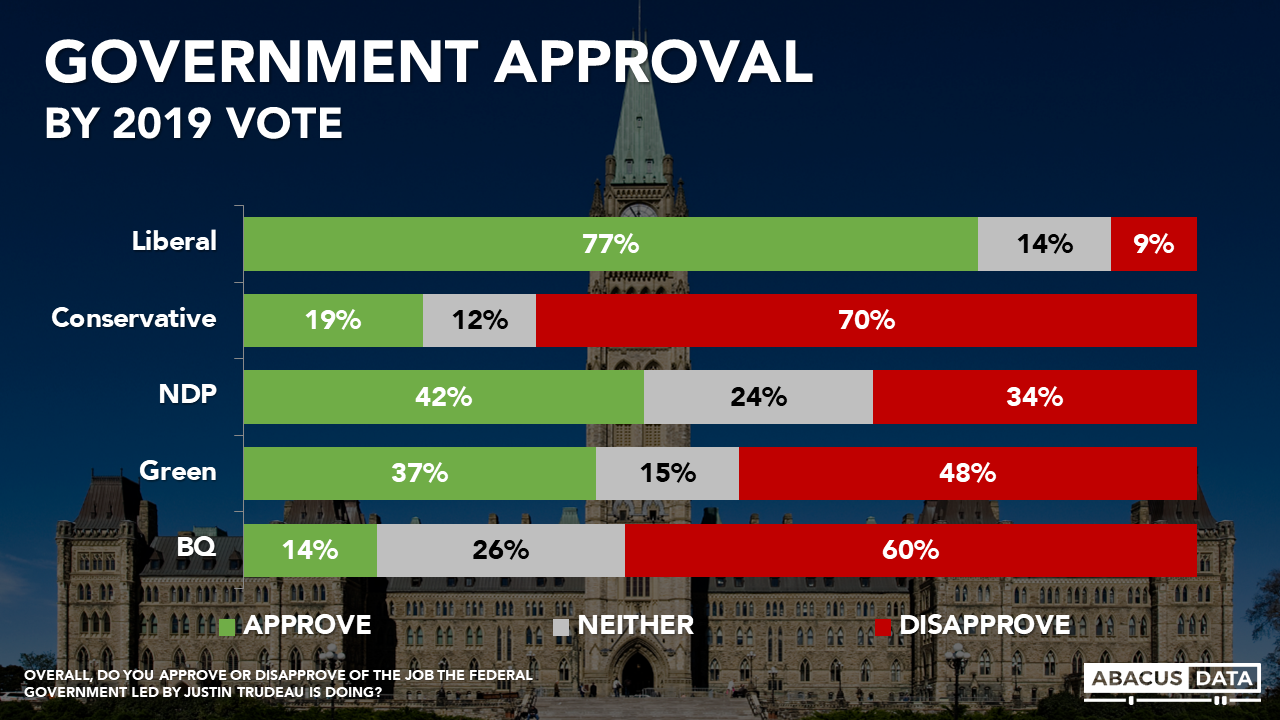 Canadians are split on their views of Prime Minister Trudeau. 38% have a positive view while 37% negative. In contrast, Conservative Leader Erin O’Toole has a net negative impression with 20% having a positive view and 28% negative. NDP Leader Jagmeet Singh’s negatives have declined to the lowest level since May with 34% viewing him positively and 21% negatively. 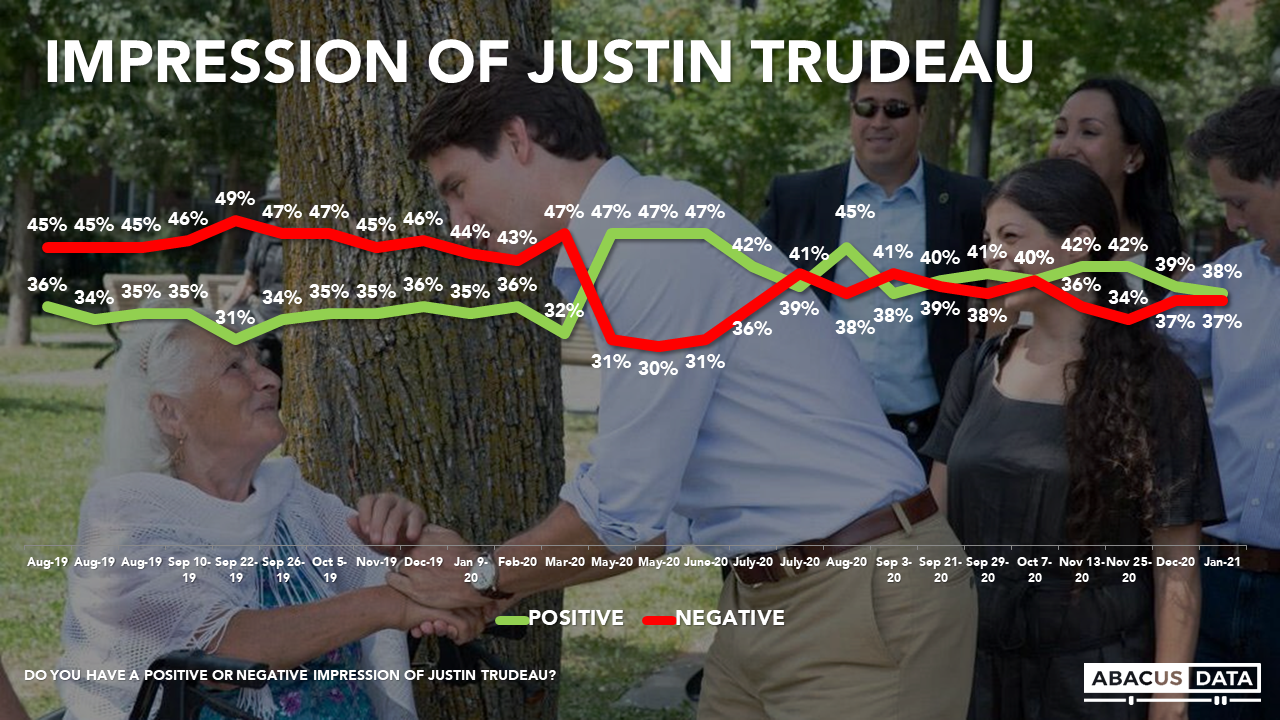 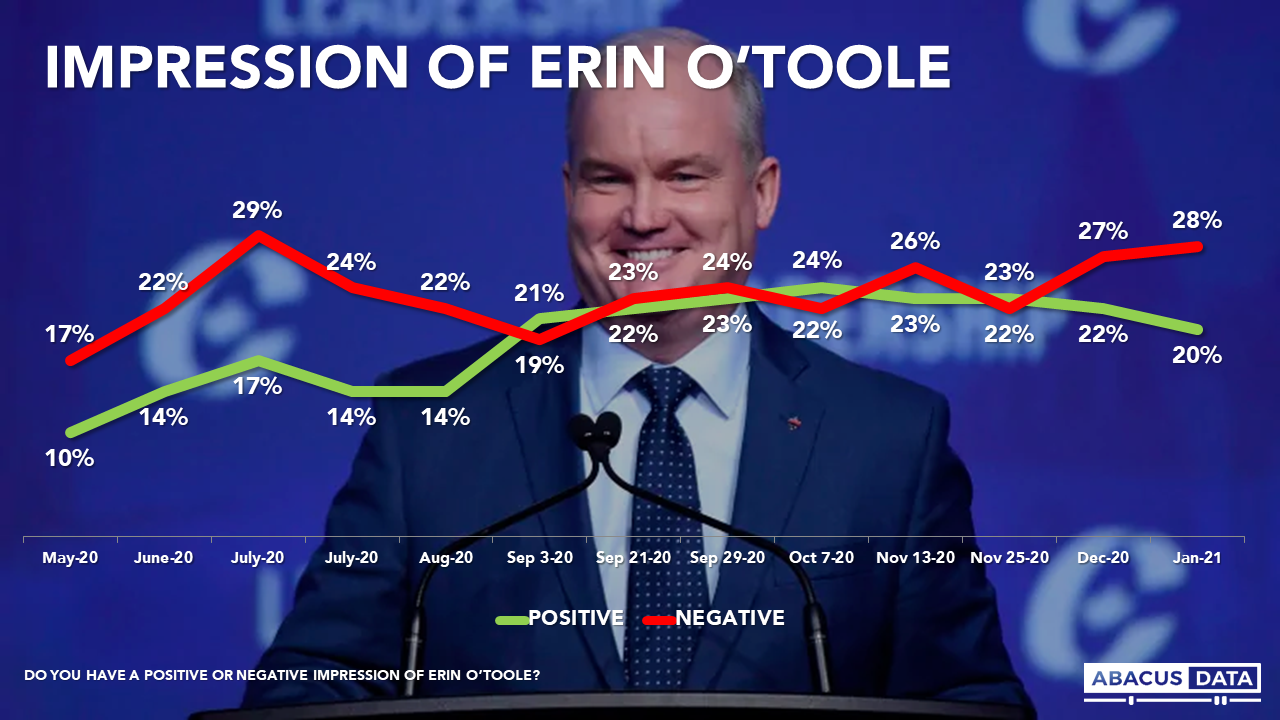 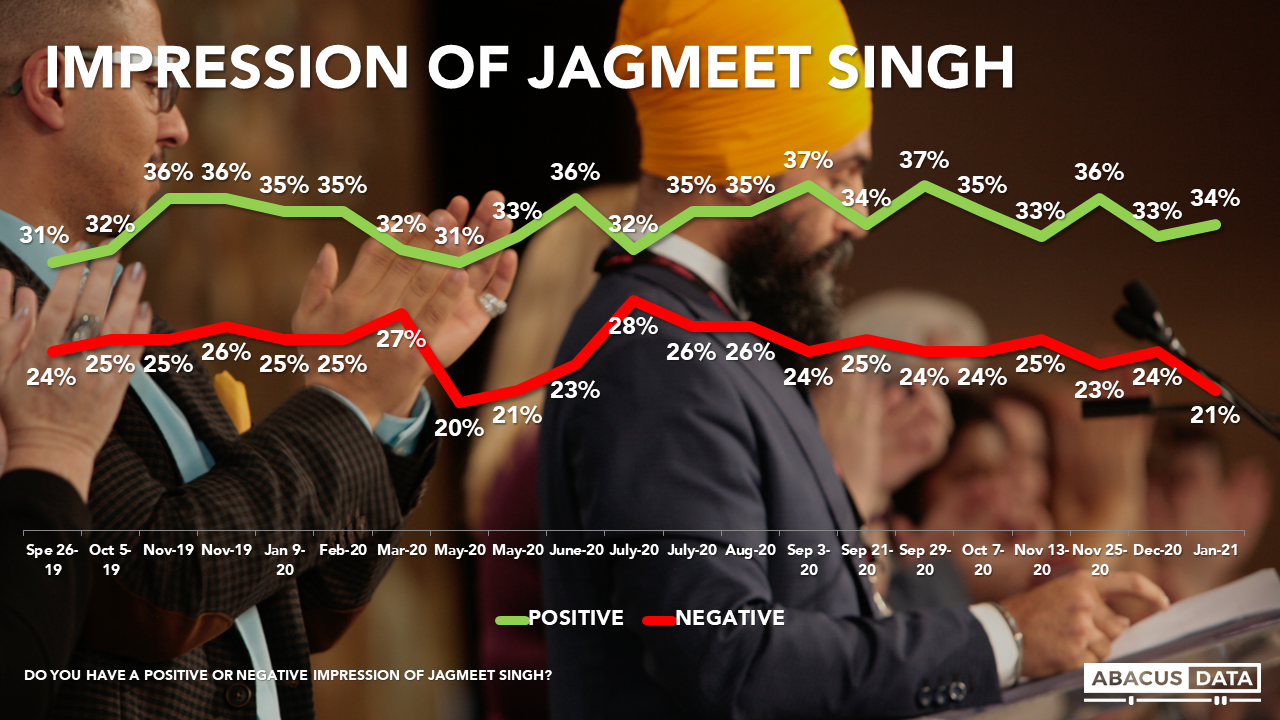 Our survey also asked respondents to rate the performance of the federal government on a number of measures. On all but one (managing the deficit/debt) a majority feel the government is doing a good or acceptable job. The government gets more positive evaluations for supporting those in trouble because of COVID-19, representing Canada internationally, and communicating with Canadians.

Negatives are highest when it comes to managing the deficit/debt, handling the economy, and being accessible and accountable. 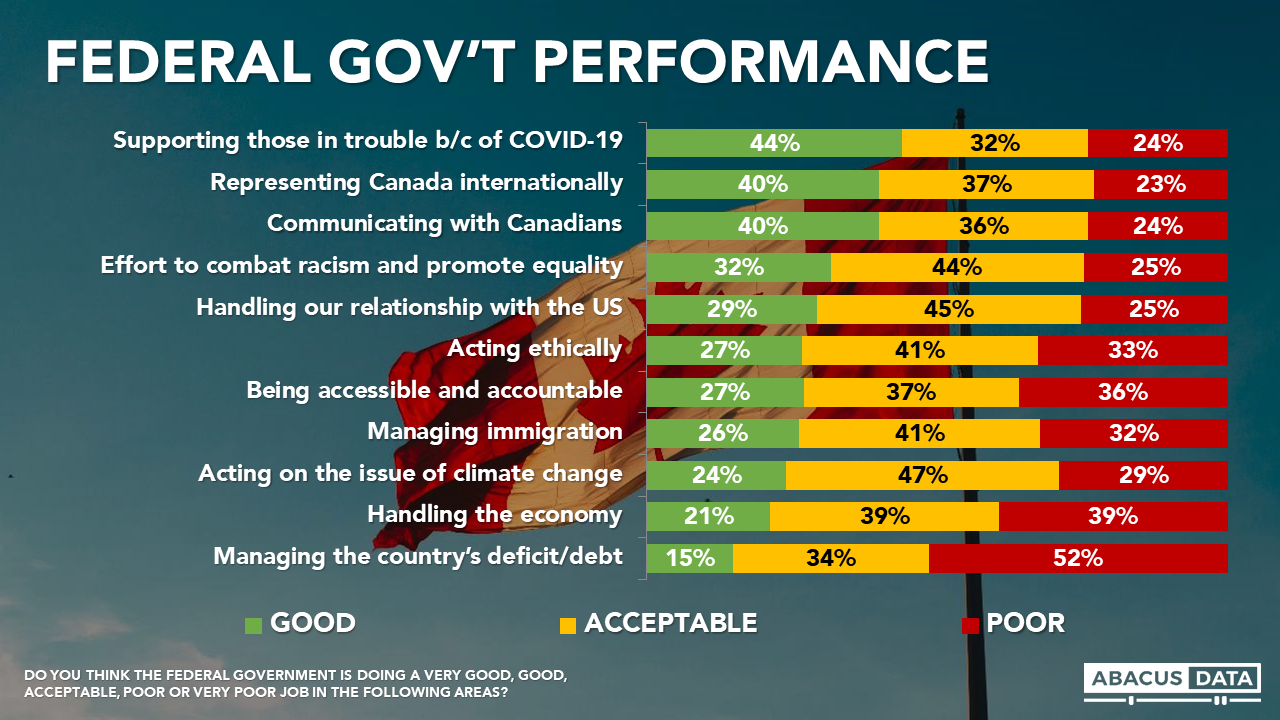 According to Bruce Anderson: “We know that most people are not paying much attention to partisan politics, preoccupied as they are with the health and economic pressures caused by the pandemic.

But even within that context a couple of things do stand out. Liberals would likely be re-elected with these numbers but the current splits in Quebec might mean they fall short of a majority, so that is a key battleground to watch.

Second, events in the United States are making it a more difficult time than ever perhaps to convince many centre and centre left voters in Canada to warm to conservative politics – and this may be the biggest challenge Erin O’Toole faces. At the time of the last election the accessible voter pools for the Liberals and Conservatives were almost equal – now a significant gap has opened up in favour of the Liberals.

Mr. O’Toole has failed to muster much frustration with the Liberals on policy issues – with only 39% unhappy with economic policy, only 24% unhappy with COVID support, and only 52% unhappy with fiscal management (despite record deficits). A protracted effort to paint the Trudeau government as unethical still finds only 33% offering a negative rating. The Liberals announced new climate and clean fuel measures which Conservatives attacked as costly and misguided – but still, only 29% are unhappy with Ottawa’s handling of the climate file.

From my standpoint, this signals that Conservatives are not finding much success in attacking Trudeau or his government’s policy approach and may not unless Canadians have some sense of what Conservatives would do differently and better if they were in office.

While policy platforms often don’t capture much attention or drive voting behaviour in this situation without laying out alternatives more clearly, significant numbers of voters may default to a worry that the nativist current they see running through conservative politics in the US would be part of what they would get if Canada’s Conservative Party were to win.

We have run a lot more questions to delve into the different threads of conservatism among Canadians and will be publishing those findings in the days ahead.”

According to David Coletto: “As we start 2021, the public opinion landscape in Canadian politics looks similar to most of the end of 2020. More approve of the federal government than disapprove, Mr. Trudeau’s image is stronger than after the last election but weaker than in the early months of the pandemic. Mr. O’Toole’s negatives are starting to rise while Mr. Singh’s image hasn’t changed much over the past 12 months at all.

The Liberals hold a 4-point lead nationally but have a 10-point lead in Ontario, are competitive in Quebec and BC, and hold a wide-advantage in Atlantic Canada. The Liberals continue to hold the upper-hand on the Conservatives who have barely budged beyond a narrow band of 30% to 32% since the last federal election. With a higher approval rating than before the election and an electorate not likely really thinking about vote choice at the moment, the Liberals still have room to grow and convert goodwill into votes.

The survey was conducted with 2,000 Canadian adults from January 8 to 12, 2021. A random sample of panelists were invited to complete the survey from a set of partner panels based on the Lucid exchange platform. These partners are typically double opt-in survey panels, blended to manage out potential skews in the data from a single source. 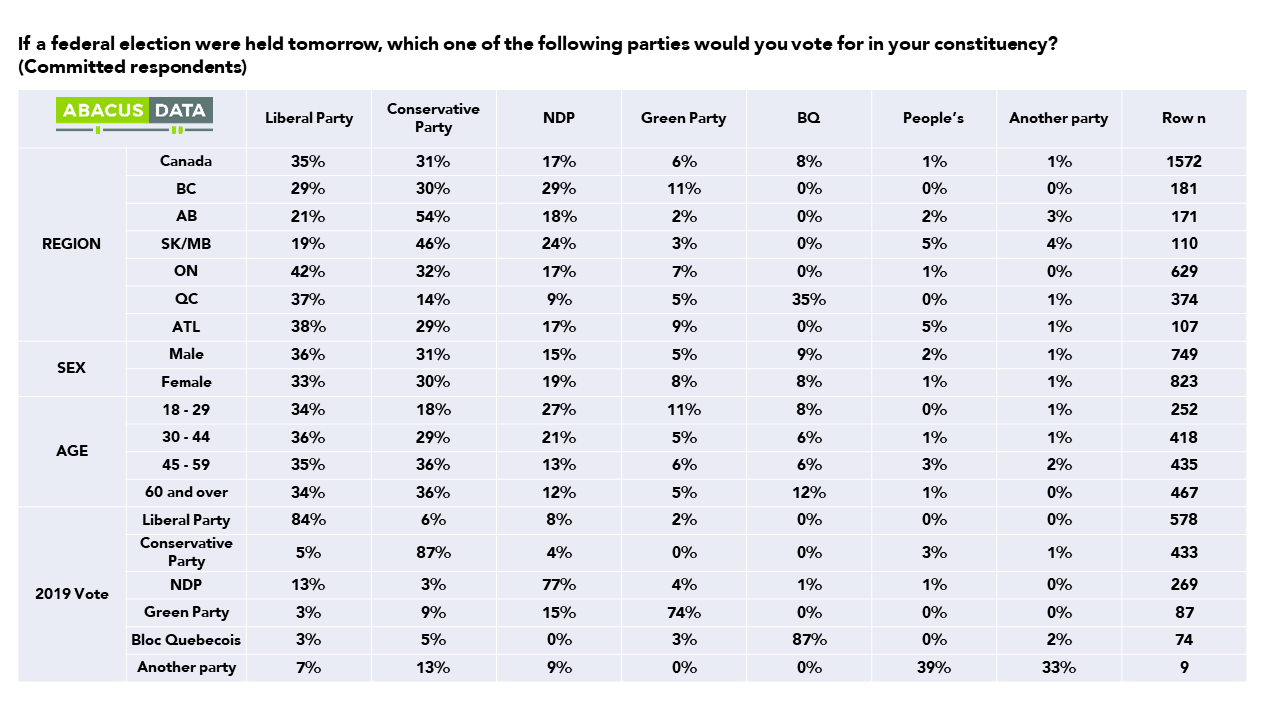 Liberals and Conservatives neck and neck again
Vaccine acceptance is on the rise
Post budget, Liberals lead by 7 nationally