We just completed a national survey of 2,692 Canadians eligible to vote in the current federal election (September 1 to 4, 2021). 62% of the interviews were done after the TVA French-language debate on Thursday evening. We will have a new release out on Tuesday with a large sample to assess the TVA debate.

Here’s what we are seeing in our most recent survey: 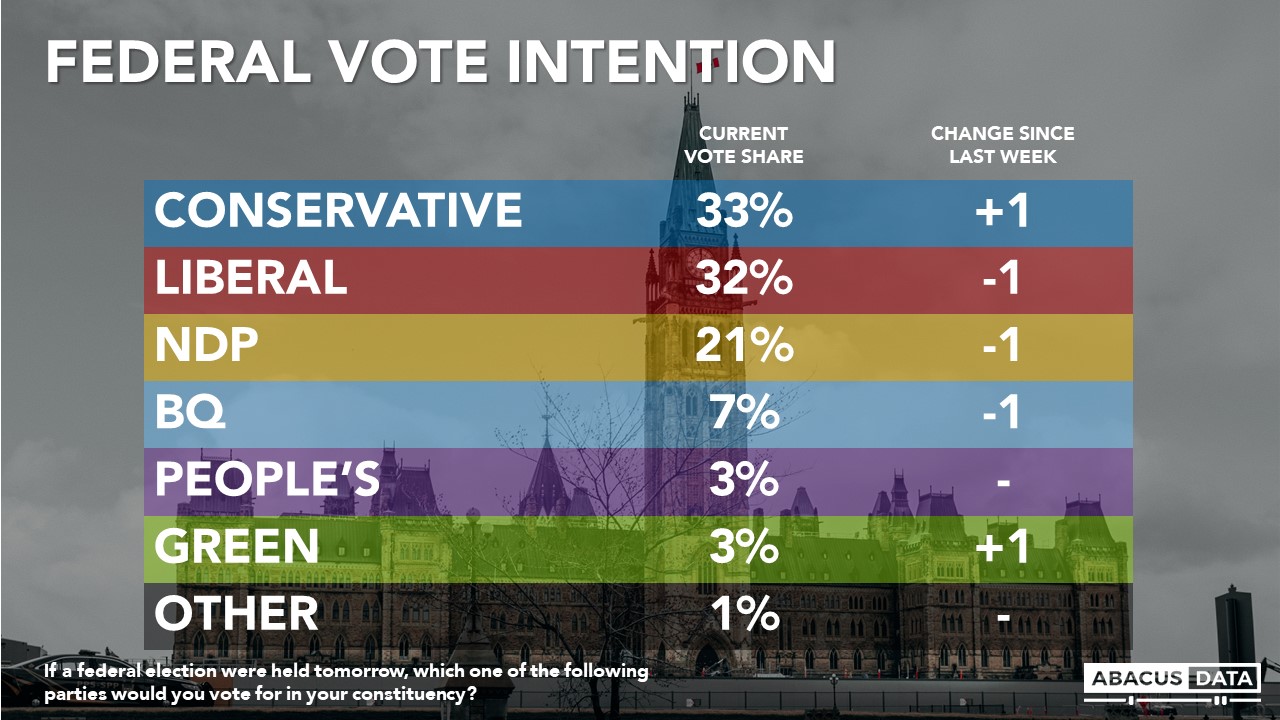 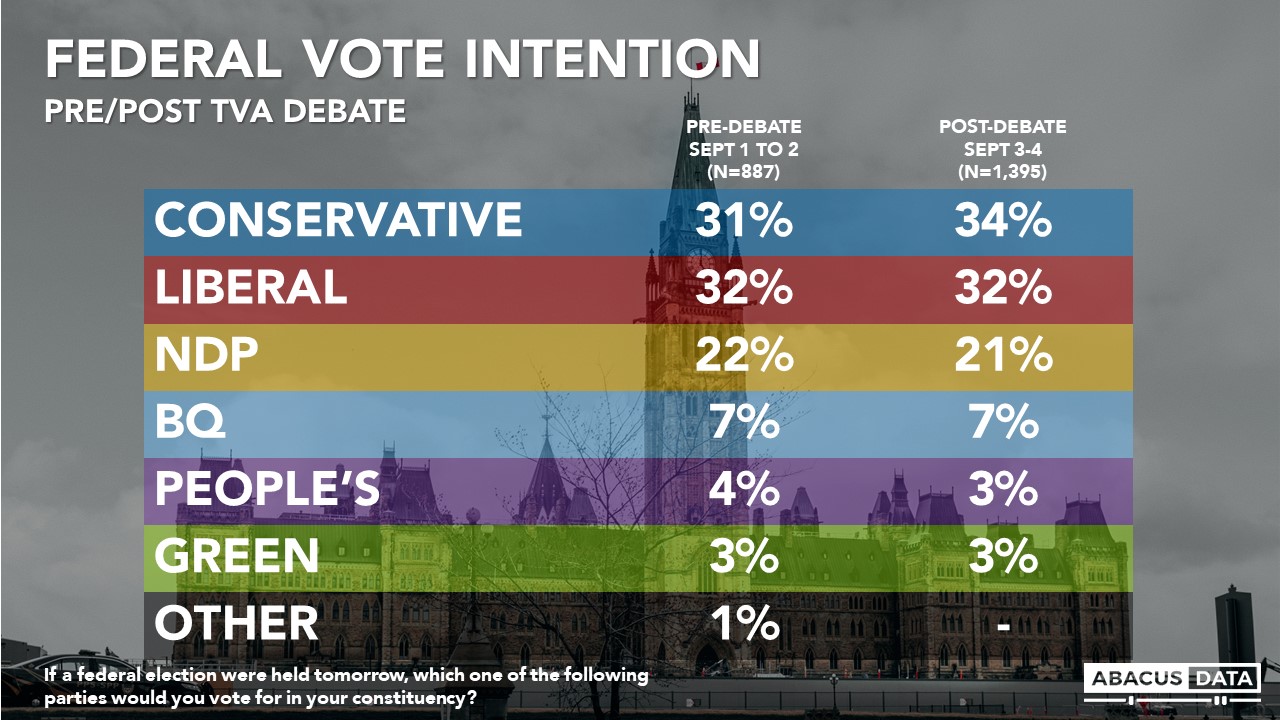 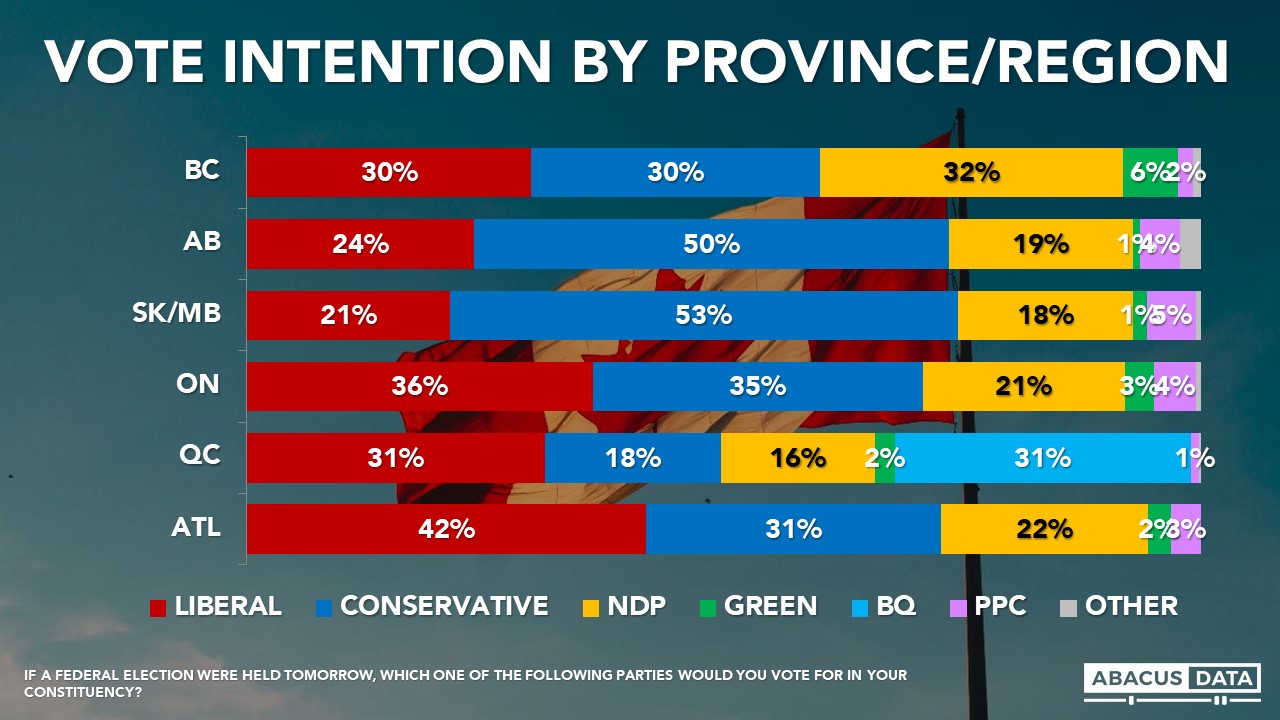 • In Manitoba and Saskatchewan, the Conservatives lead with 53% followed by the Liberals at 21% and the NDP at 18%

• In Ontario, the Liberals and Conservatives are statistically tied (36% LPC vs. 35% CPC) with the NDP at 21%. Last week we had the Liberals ahead by 7 in Ontario. 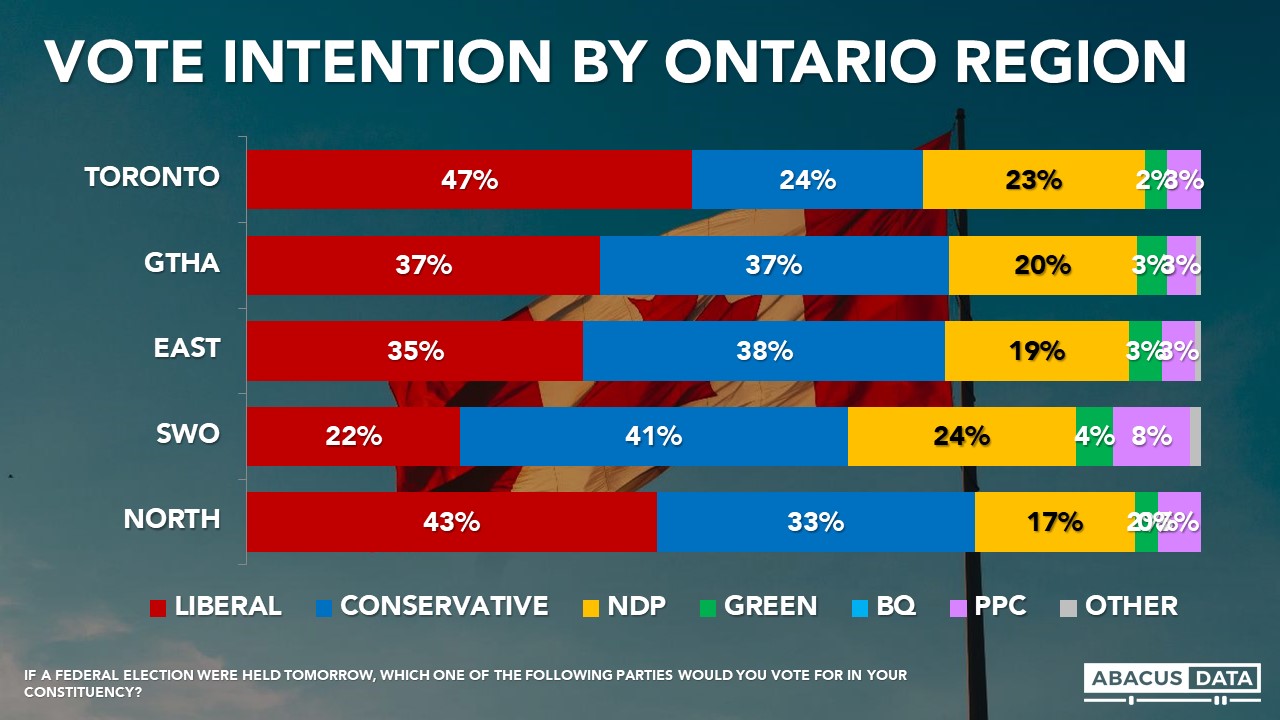 • In Quebec, we see the BQ and LPC tied at 31% followed by the Conservatives at 18% and the NDP at 16%. When we compare the sample pre- and post-TVA debate, differences are within the margins of error. In our next release, we will have a larger sample of people who watched the debate and can report a clearer picture of how it might have affected attitudes. 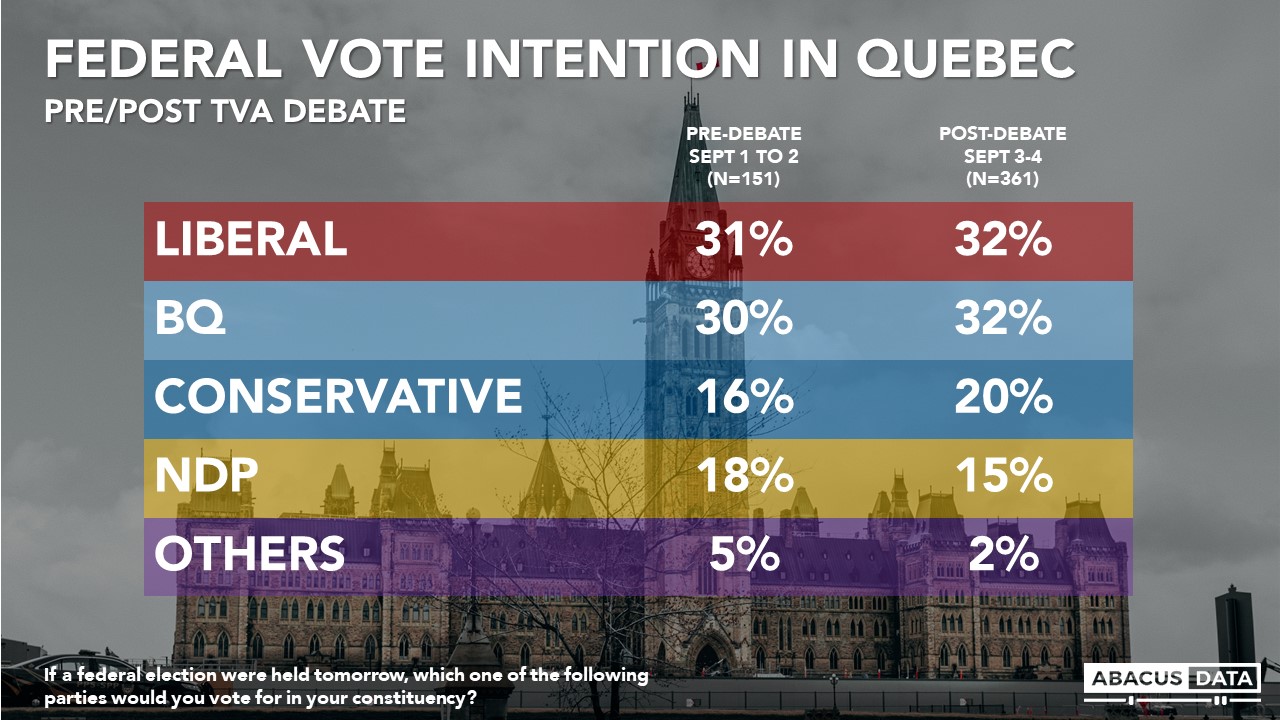 Although the Liberals and CPC are statistically tied among all decided respondents, the Conservatives continue to have a 3-point lead among those who are most likely to vote. Among the 69% of respondents who said they would definitely be voting, the Conservatives have 35% compared with 32% for the Liberals and 20% for the NDP. This is largely unchanged from last week. 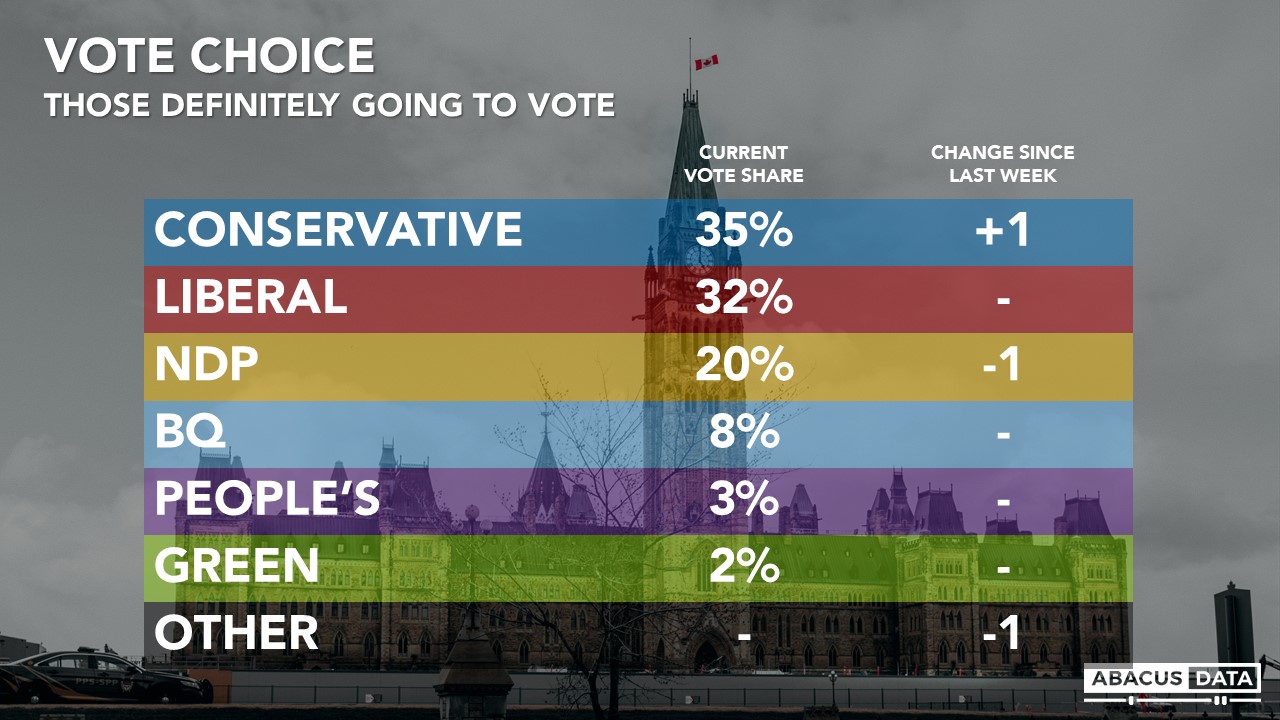 TODAY VS. 2019: HOW WELL ARE PARTIES HOLDING THEIR VOTE.

The Conservatives are holding 87% of their 2019 vote, the rest has been scattered with no more than 4% going to any other party. 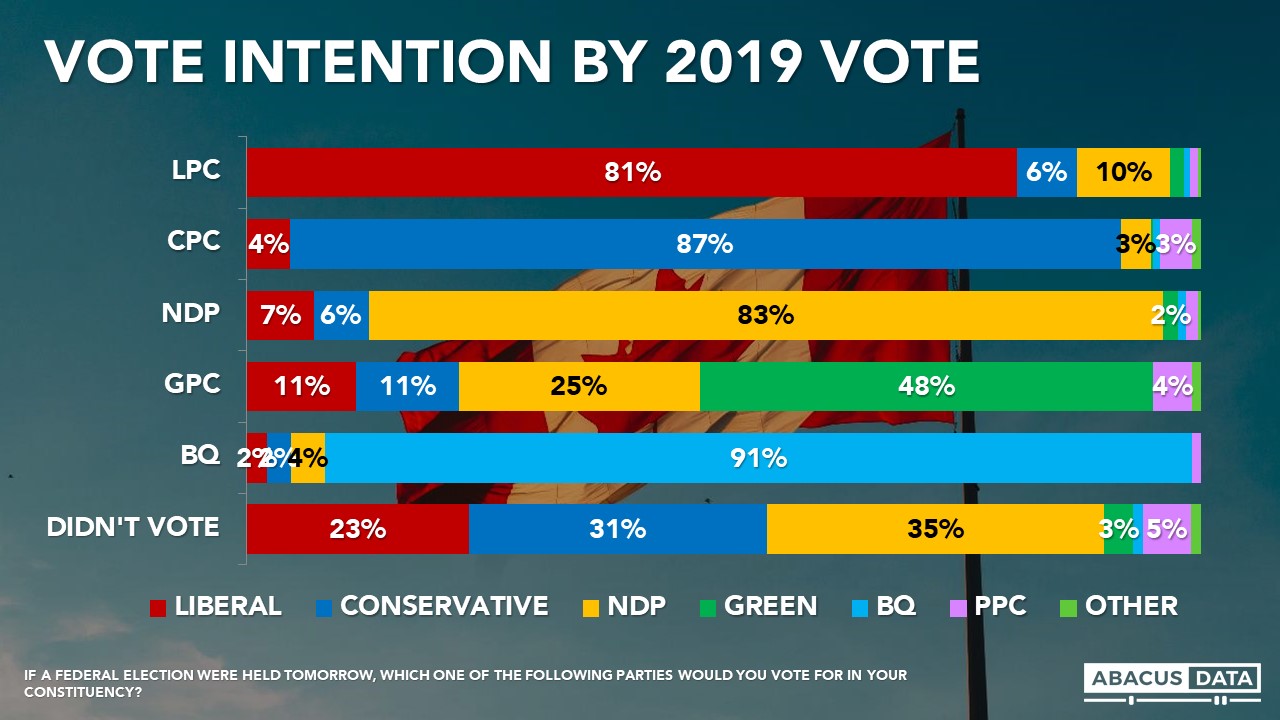 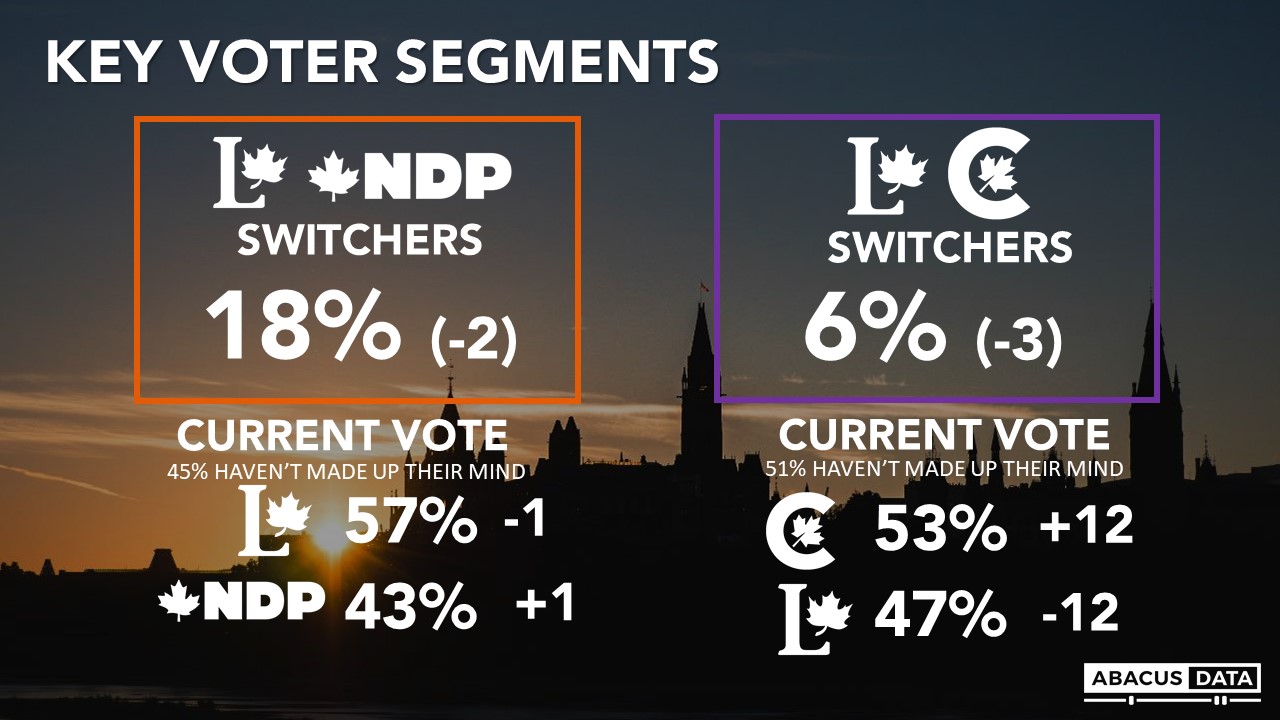 Today, 33% of those with a vote preference say their vote could still change (down 5 points in a week, and 7-points in two weeks. NDP and Green supporters are the most likely to be open to switching. Overall, 25% of Conservative supporters might change compared with 32% of Liberal voters, 25% of BQ supporters, and 46% of NDP voters. 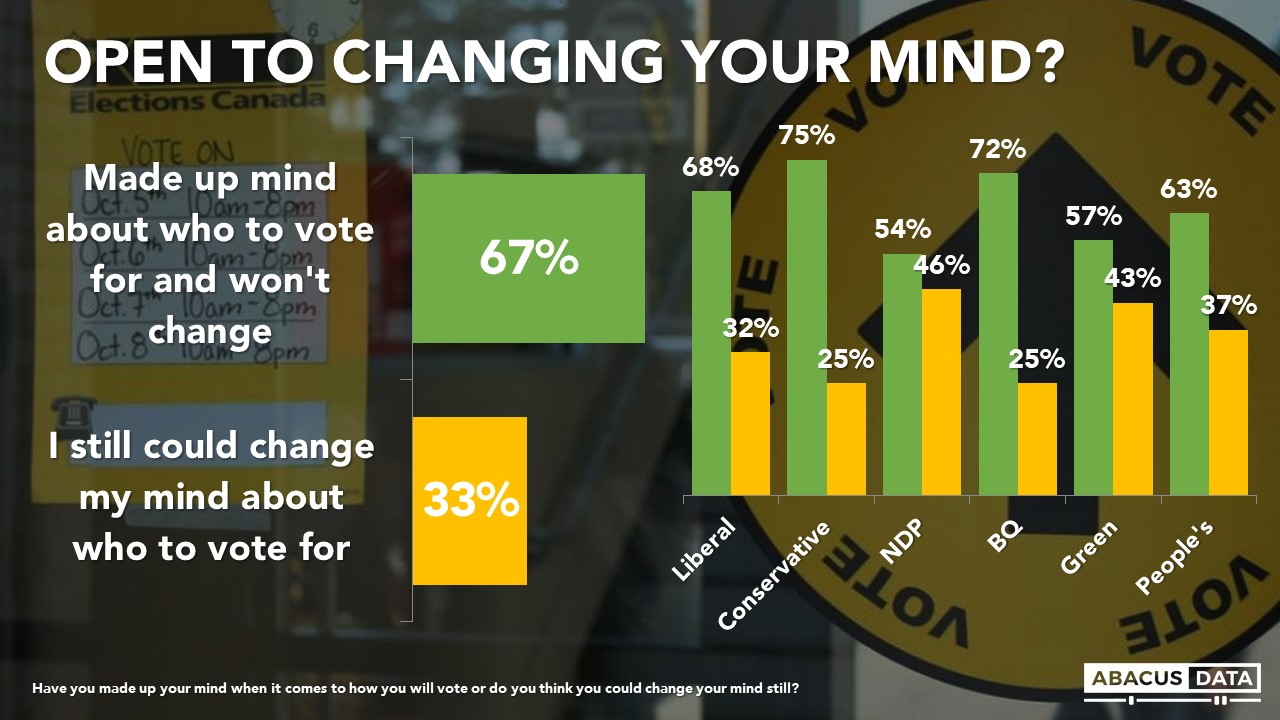 Asked which of four (most likely based on today’s numbers) outcomes they would prefer, 58% would prefer a Liberal victory (31% majority, 27% minority) while 44% would prefer a Conservative win (13% minority, 28% majority). Compared with last week, preference for a Liberal government is down 2-points, and over the past two weeks, it is down 5-points.

Among BQ voters 56% would prefer the Liberals win, compared to 44% who would like the Conservatives to come out on top.

Among Liberal/Conservative switchers two thirds (64%) would prefer to see the Liberals win. 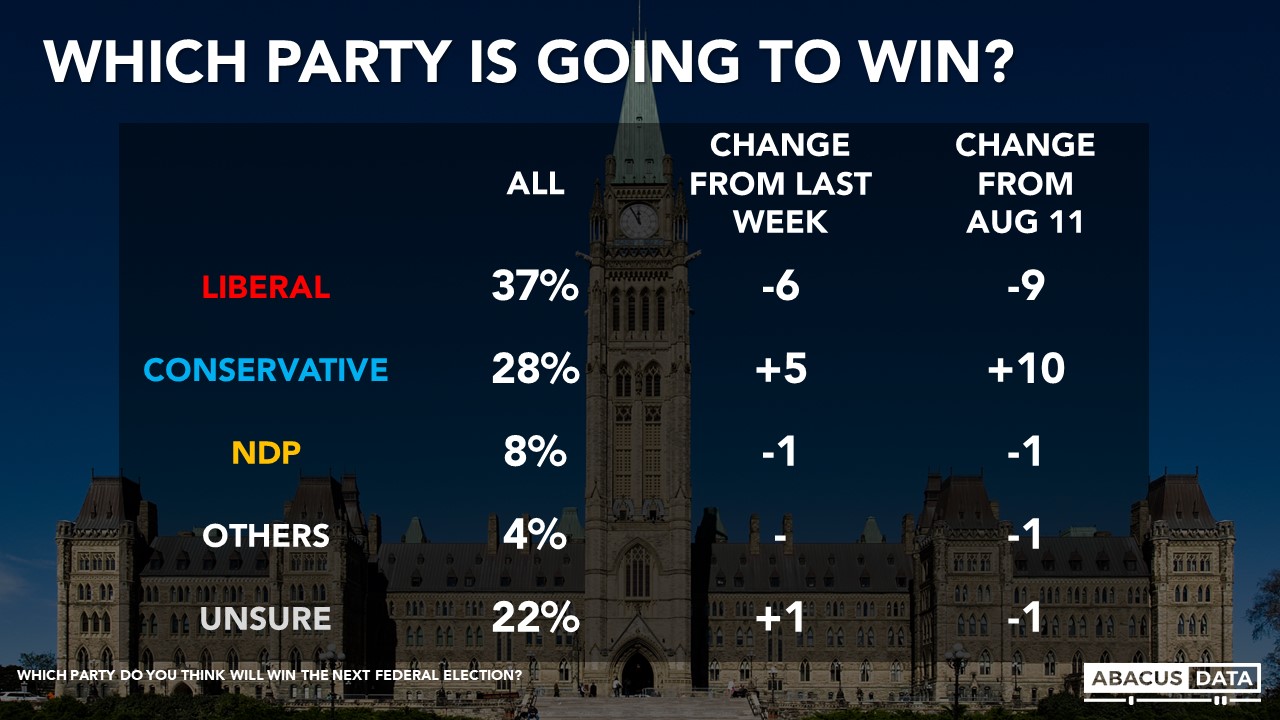 Those who would prefer the LPC to win but think the Conservatives are going to win makes up 4% of the electorate – doubling from last week. Among this group, 43% would vote NDP, 33% Liberal and 12% Conservative. 9% would vote Green and 3% BQ.

Justin Trudeau enjoys a positive impression among 38% and negative impressions among 44%, for a net score of -6. This is unchanged from last week. Regionally, Mr. Trudeau’s net favourables are -5 in BC, -27 in Alberta, -33 in SK/MB, -2 in Ontario, 0 in Quebec, and +6 in Atlantic Canada. Among Liberal/NDP switchers Trudeau is +67. Among Liberal/Conservative switchers he is +43. 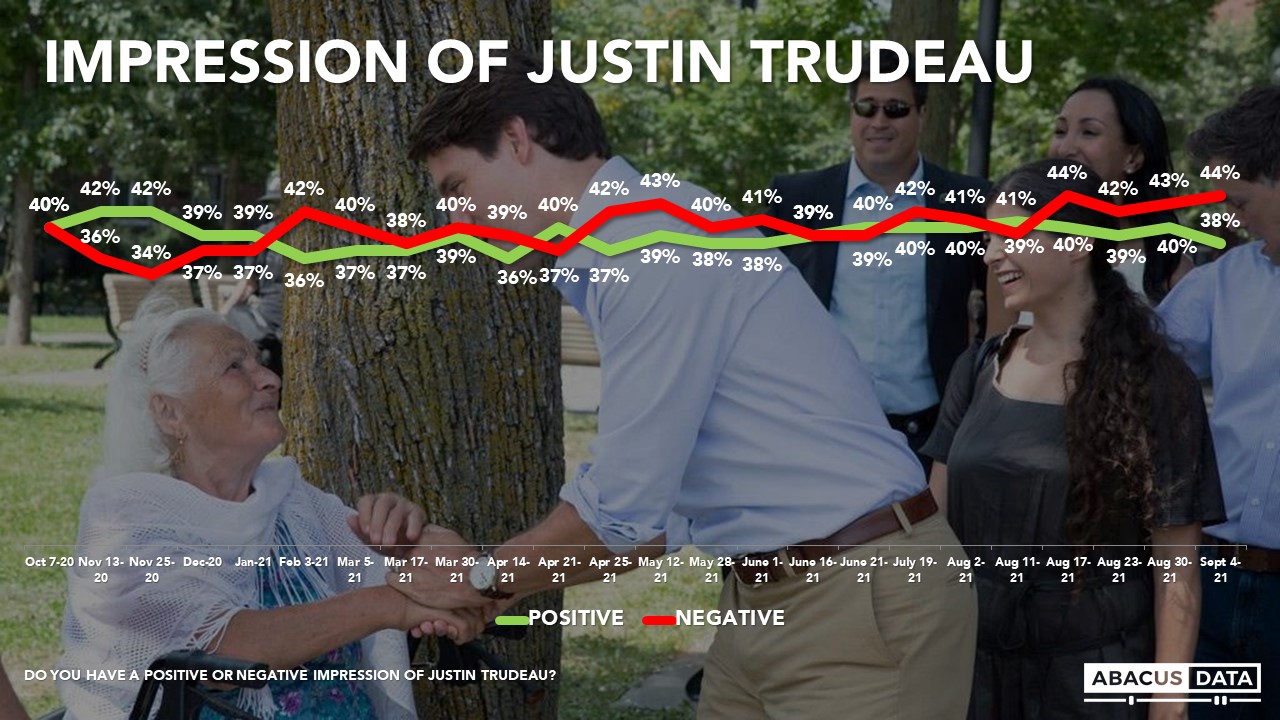 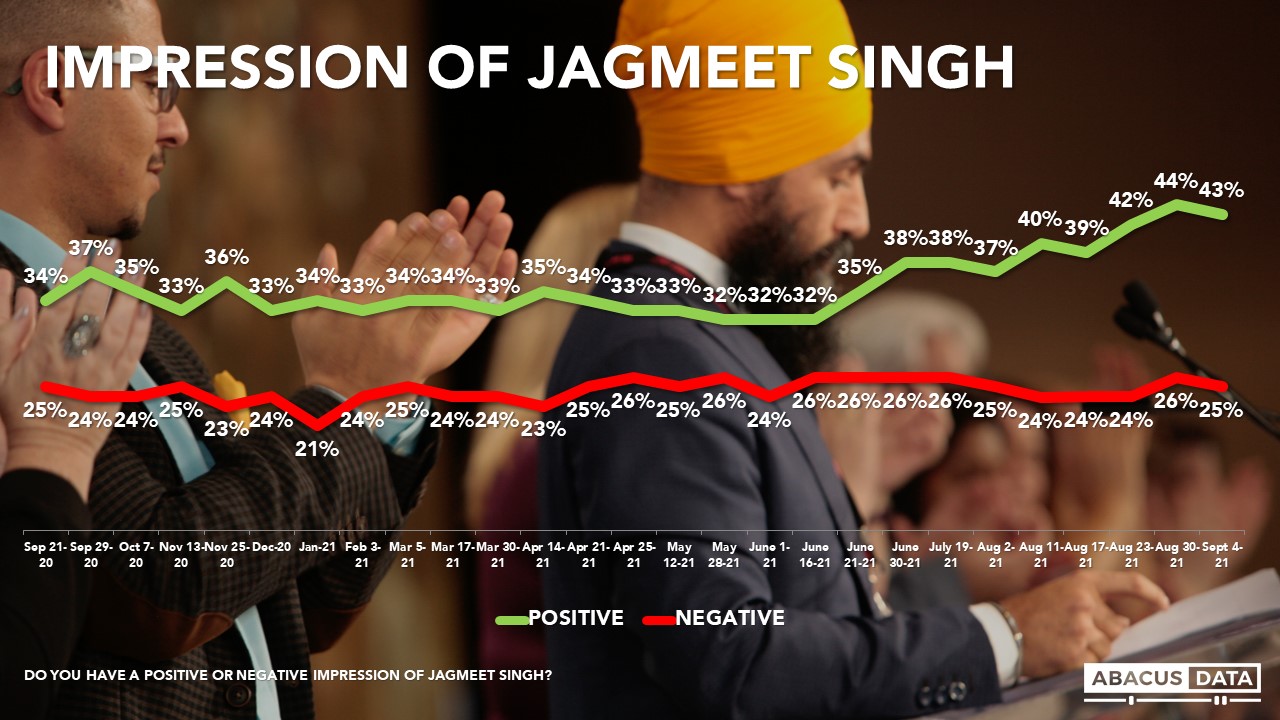 Today 30% have a positive impression of the Conservative leader Erin O’Toole (+1 from last week) while his negatives are at 40% (-2) for a net score of -10, showing another week of gains. 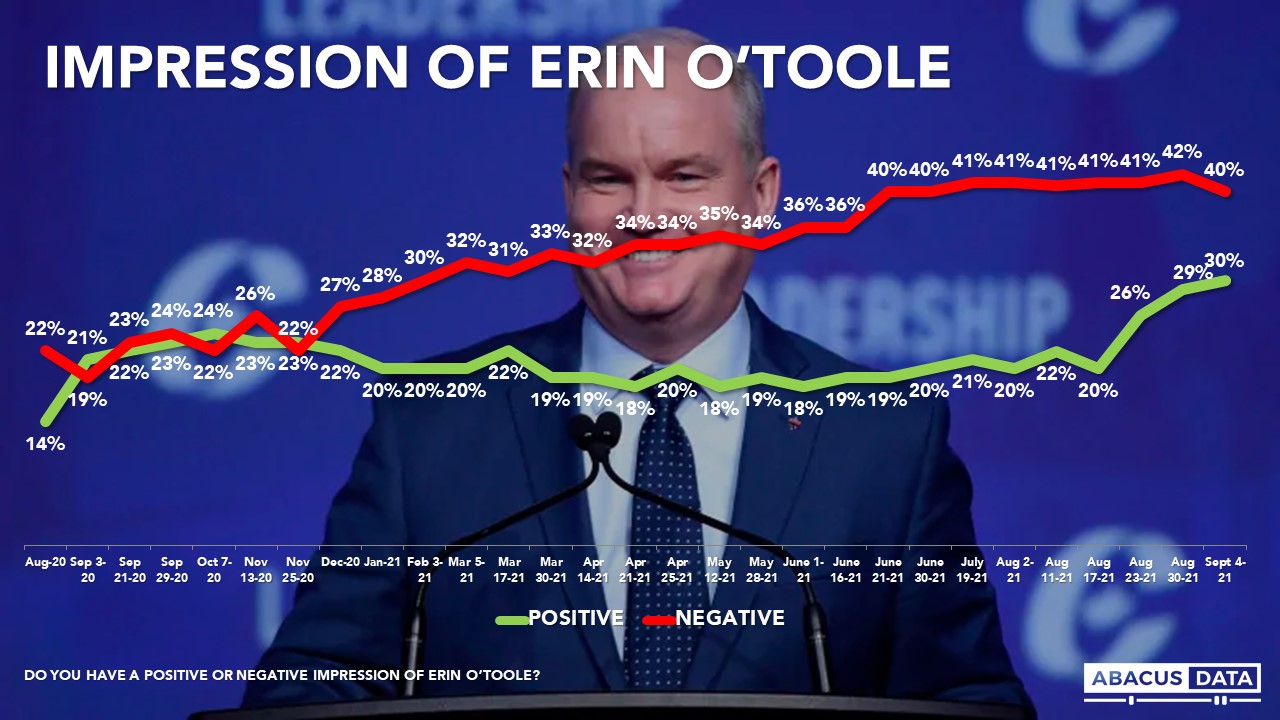 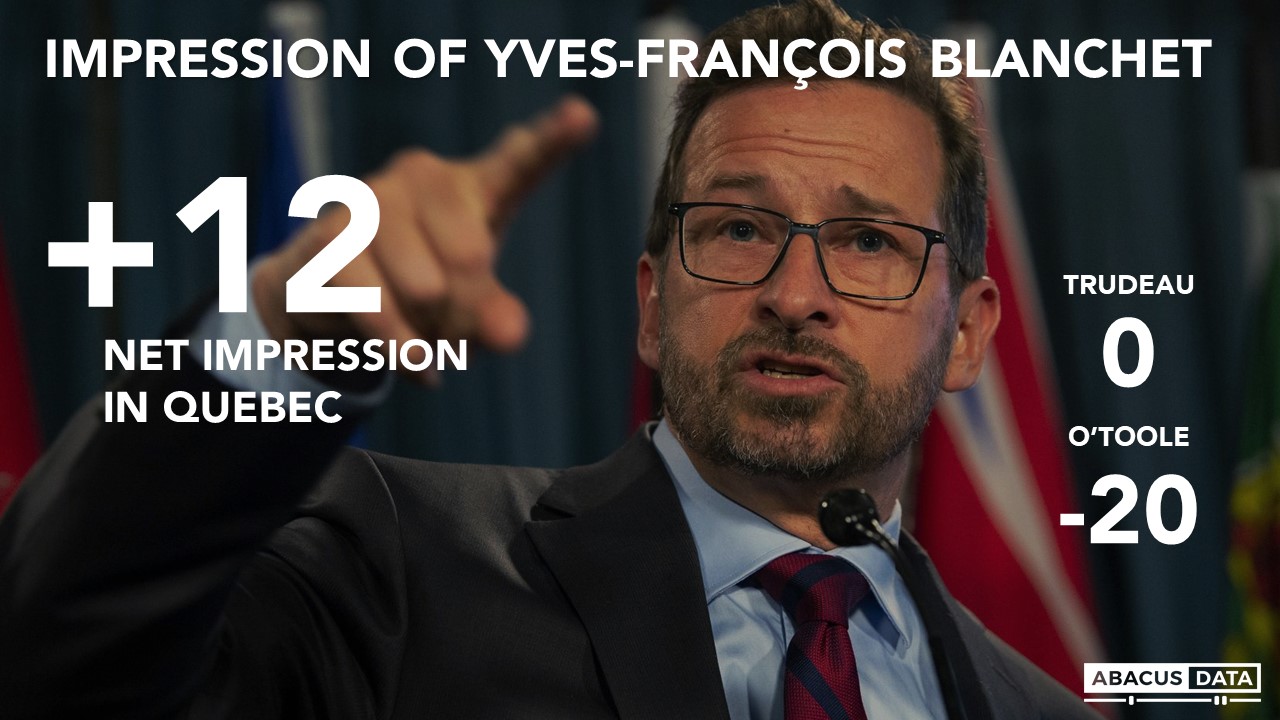 • Justin Trudeau: 19% (unchanged) say their impressions are improving, 42% (+1) declining, for a momentum score of -23, similar to last week. Among LPC/NDP switchers, his momentum score is +7 and among LPC/CPC switchers it is -19 (a big swing from last week). Among those who voted Liberal in 2019, 22% say their impression of Mr. Trudeau has declined since the start of the campaign. 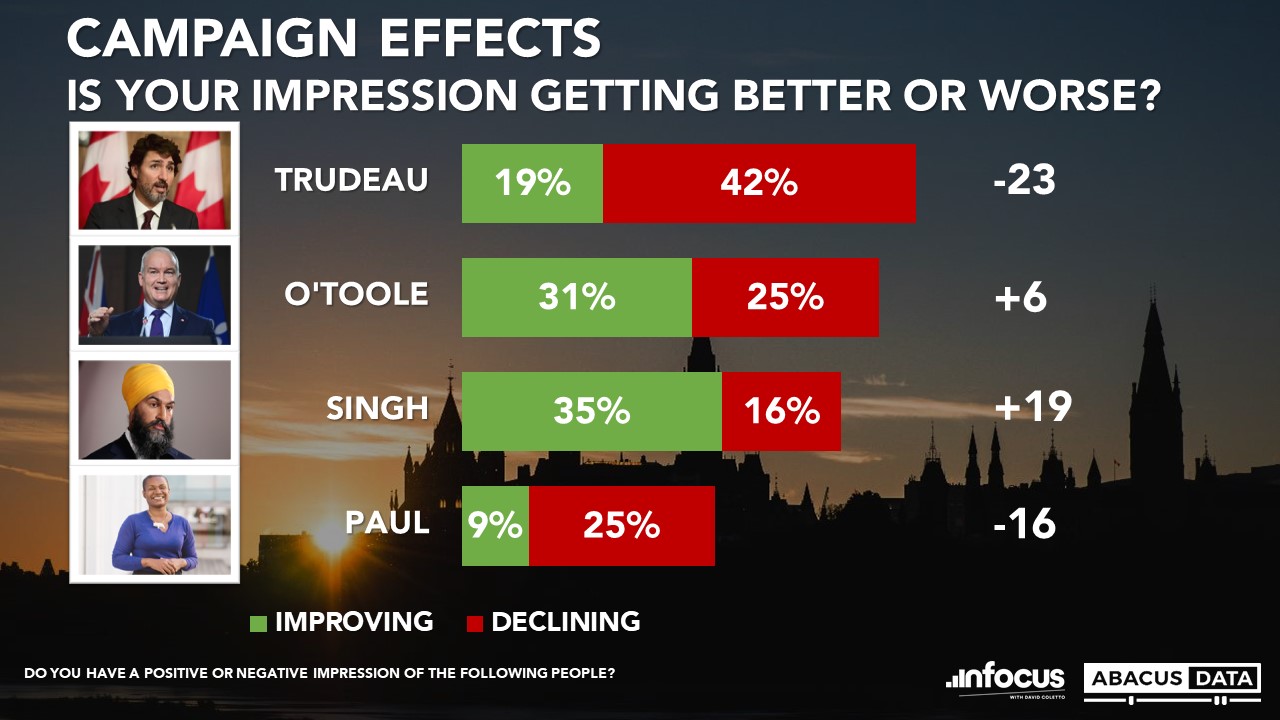 The rise in the desire for change we were seeing in previous weeks has halted. Today, 48% definitely want to see a change in government (unchanged from last week) while another 23% say it would be good to have a change, but it is not really that important to them, for a total of 71% who would prefer a change in government. This outlook is almost identical to the feelings we measured in the run up to the 2019 election. 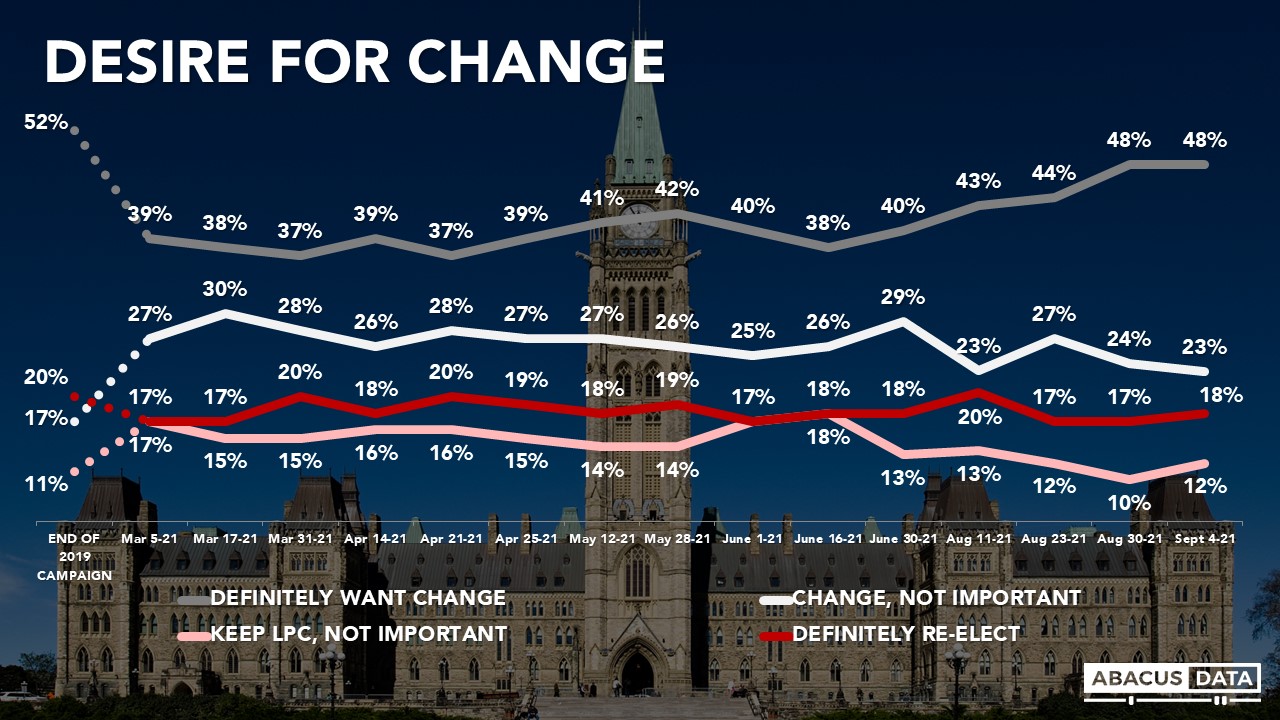 The vote preference by change group is important to understanding the election. Among those who say they want change but it isn’t important (23% of the electorate at the moment), the Liberals and NDP are statistically tied (NDP 34% vs. LPC 32%) with the Conservatives in third. As long as the Liberals can win a large share of this group, they can be re-elected.

But if those in this group migrate up to “definitely want change”, it’s far less likely they will vote Liberal. As perceptions about the competitiveness of the election shift, the split in these groups could also change. 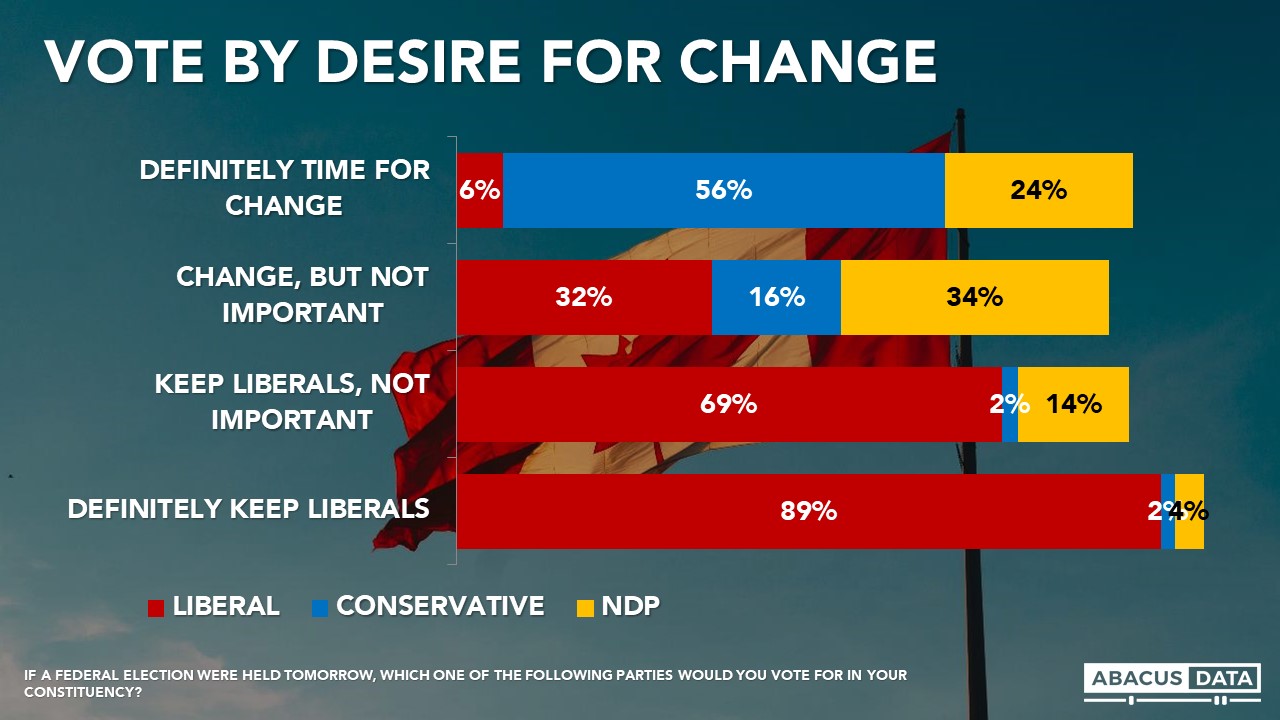 Today, 36% of voters would prefer Justin Trudeau be PM after the election, 32% would prefer Erin O’Toole, and 25% Jagmeet Singh. This is the exact same split as last week. 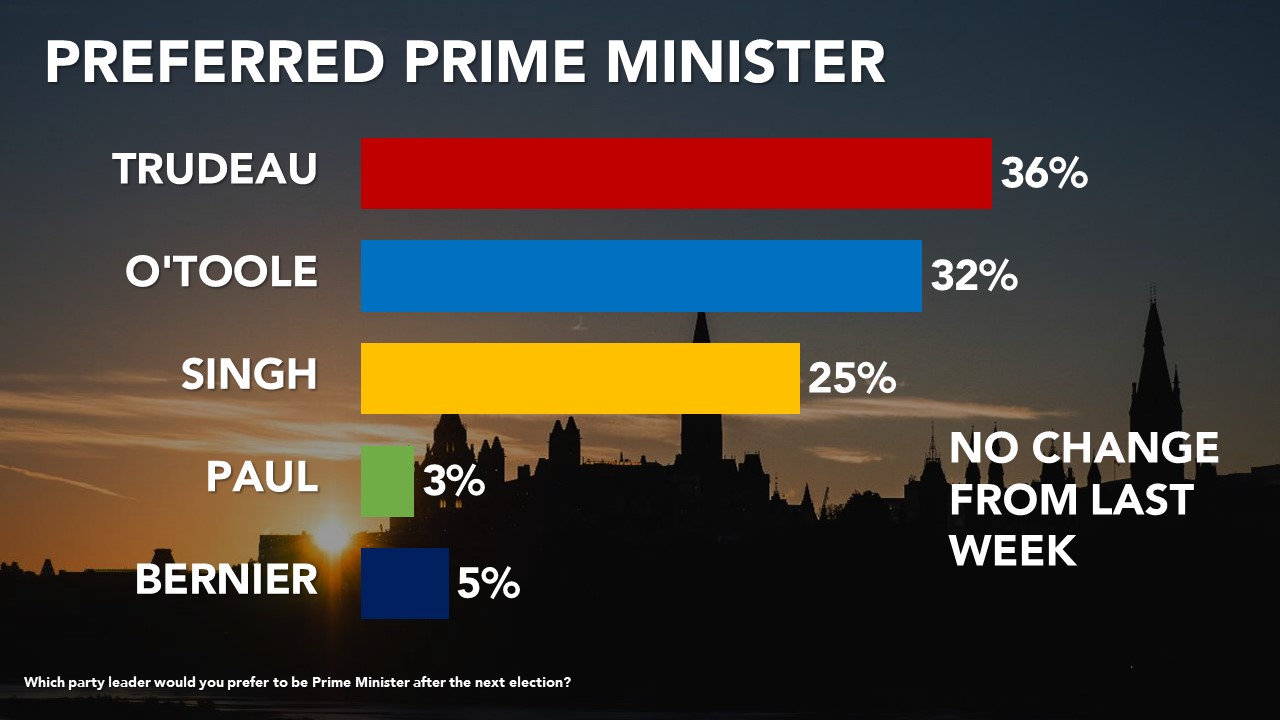 According to Bruce Anderson: Today’s results would probably produce a very similar House of Commons to the one which was just dissolved. But it is very unlikely that there will be no movement in the next 16 days as more debates and more advertising kick in. There are two groups to watch in my view.

• The 23% who want change but who don’t feel that strongly about it – if a third of them vote NDP as they currently intend to do, then the Liberals could be defeated by the Conservatives on Election Day.

• The 18% who say they will either vote Liberal or NDP, among whom 45% say they will currently vote NDP, but among whom 98% prefer the Liberals to win over the Conservatives. As three of four NDP voters prefer a Liberal government they likely hold the key to whether the country will elect one on September 20.

The campaign has gone well for Erin O’Toole personally and he has improved his party’s chances. With debates beginning and advertising becoming more plentiful and more pointed, the level of scrutiny about a Conservative victory and what it means will be higher and more persistent, especially as Canadians think it is more possible.

NDP-leaning progressive voters will likely be attentive to what a Conservative government could mean for issues ranging from climate change and pipelines to guns to childcare to health care and vaccinations.

With almost 10 million voters saying their current preference isn’t locked in, the election trajectory is far from certain and the outcome unpredictable.

According to David Coletto: “We continue to see only slight changes in vote intention and impressions on most metrics we track as week three of the campaign comes to a close. The Conservatives and Liberals remain statistically tied although the Conservatives have a slight lead among those most likely to vote. Impressions of the leaders haven’t changed much since last week.

However, we are seeing some important shifts in other perceptions. For example, far more people today believe the Conservatives will win the election. More still think the Liberals will win but the gap has closed substantially over the past three weeks.

The Conservatives are making some gains among Liberal/Conservative switchers, but they haven’t fundamentally altered the electorate. Those open to voting Conservative is stuck at 44%, the same as last week. And so, while the Conservative campaign has been successful in re-engaging its 2019 coalition, I don’t see any evidence yet that it is expanding its audience and building a coalition that can win the election outright.

The Liberal vote share has been stuck in the low 30s now for three straight weeks. Mr. Trudeau’s negatives are rising slowly but importantly for the Liberals, the desire for change has halted its weekly rise in our tracking. Right now, more people still would prefer Mr. Trudeau as prime minister over Mr. O’Toole but that margin has shrunk somewhat from last week.

And finally, while Mr. Singh continues to have the best net impression among the national leaders, the NDP vote is stuck in the low 20s. In fact, it seems to have reversed gains made earlier. There’s still a lot of people who say they are open to voting NDP (48%) but converting them beyond 20-22% seems to be a challenge. The biggest risk for the NDP remains the threat of strategic voting, especially as more and more people come to realize that the Conservatives are able to win the election.

So far, the TVA leaders’ debate doesn’t seem to have fundamentally altered the race in Quebec but we will have more to say on that on Tuesday.”

The survey was conducted with 2,692 Canadian adults eligible to vote from September 1 to 4, 2021. A random sample of panelists were invited to complete the survey from a set of partner panels based on the Lucid exchange platform. These partners are typically double opt-in survey panels, blended to manage out potential skews in the data from a single source.

The margin of error for a comparable probability-based random sample of the same size is +/-1.9%, 19 times out of 20. 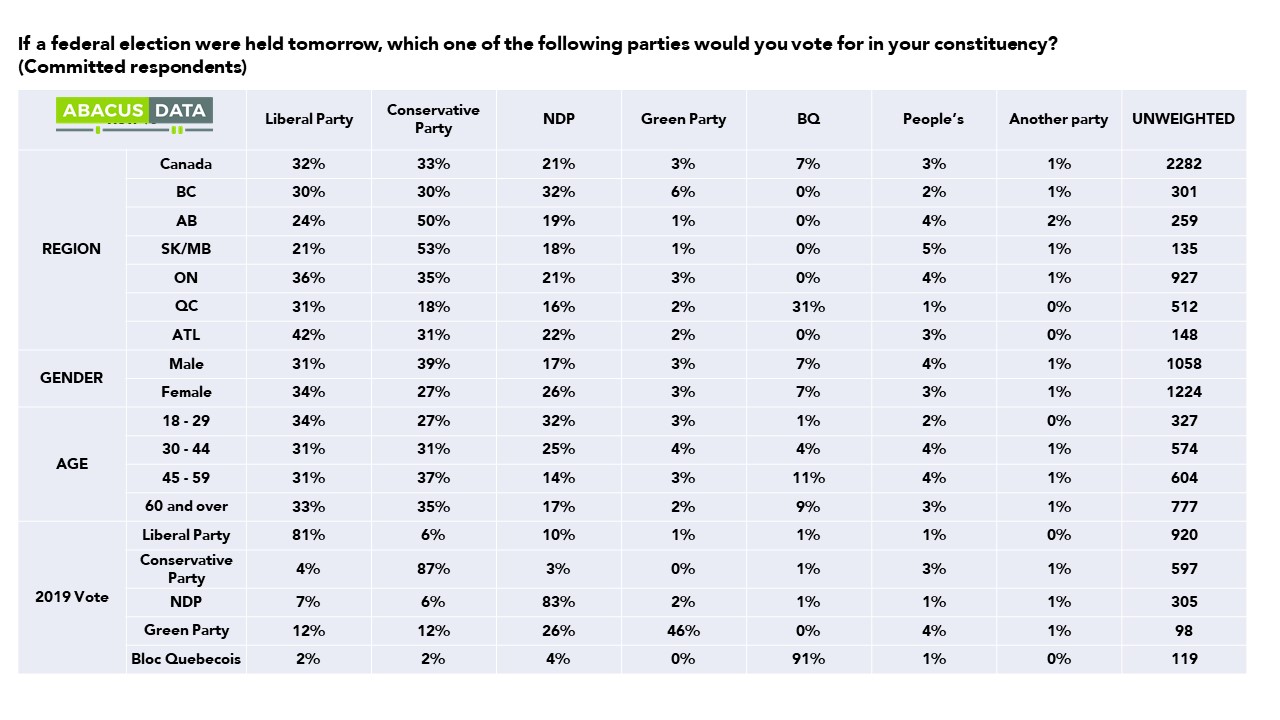 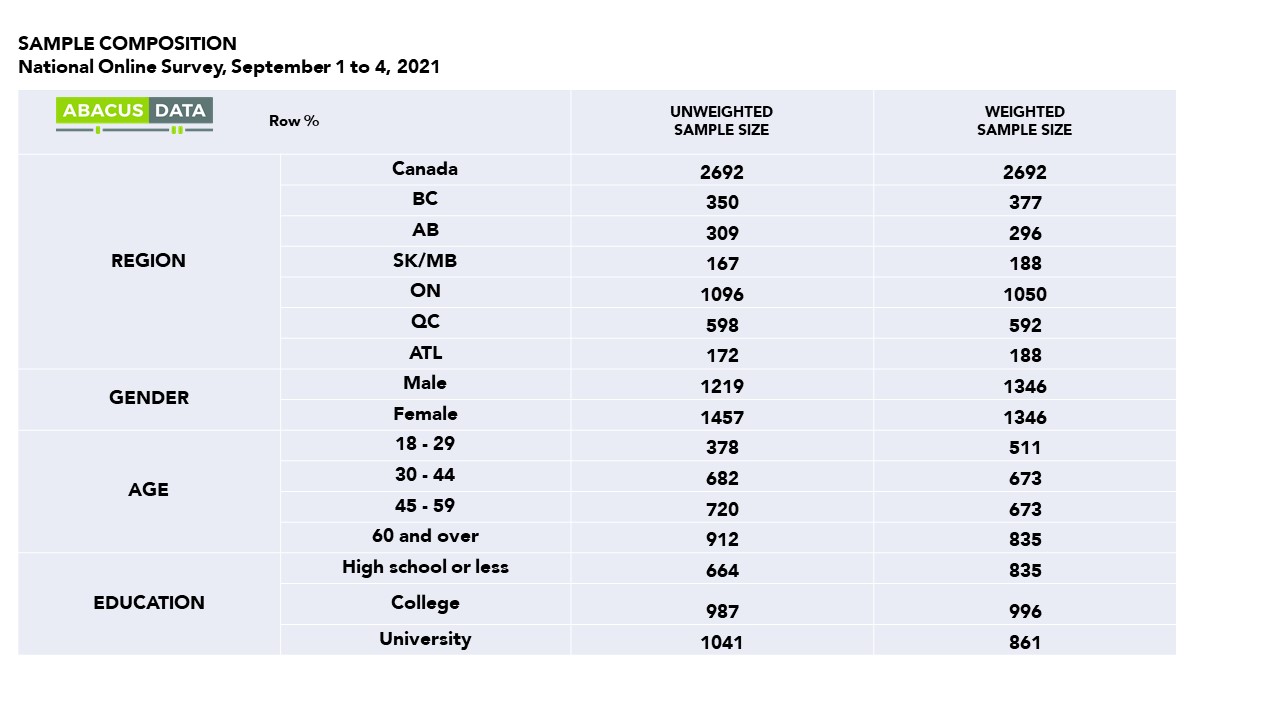