As we head towards a likely election call in the next few weeks, here’s our latest look at the Canadian political environment.

HOW WILL CANADIANS REACT TO AN EARLY ELECTION CALL?

While only a minority prefer an election now, the vast majority (83%) won’t be upset at Mr. Trudeau if he asks the Governor General for an early election.

When asked, “If the Prime Minister asks for an election to be held this fall saying he would like to give Canadians a chance to select the government they want to take the country forward, how would you feel about this?” 38% say they would be happy to have a chance to cast a ballot and help choose the government to take us forward, 44% would prefer not to have an election but it isn’t something that would affect how they vote, while 17% say they would be upset at Mr. Trudeau because an election seems unnecessary. 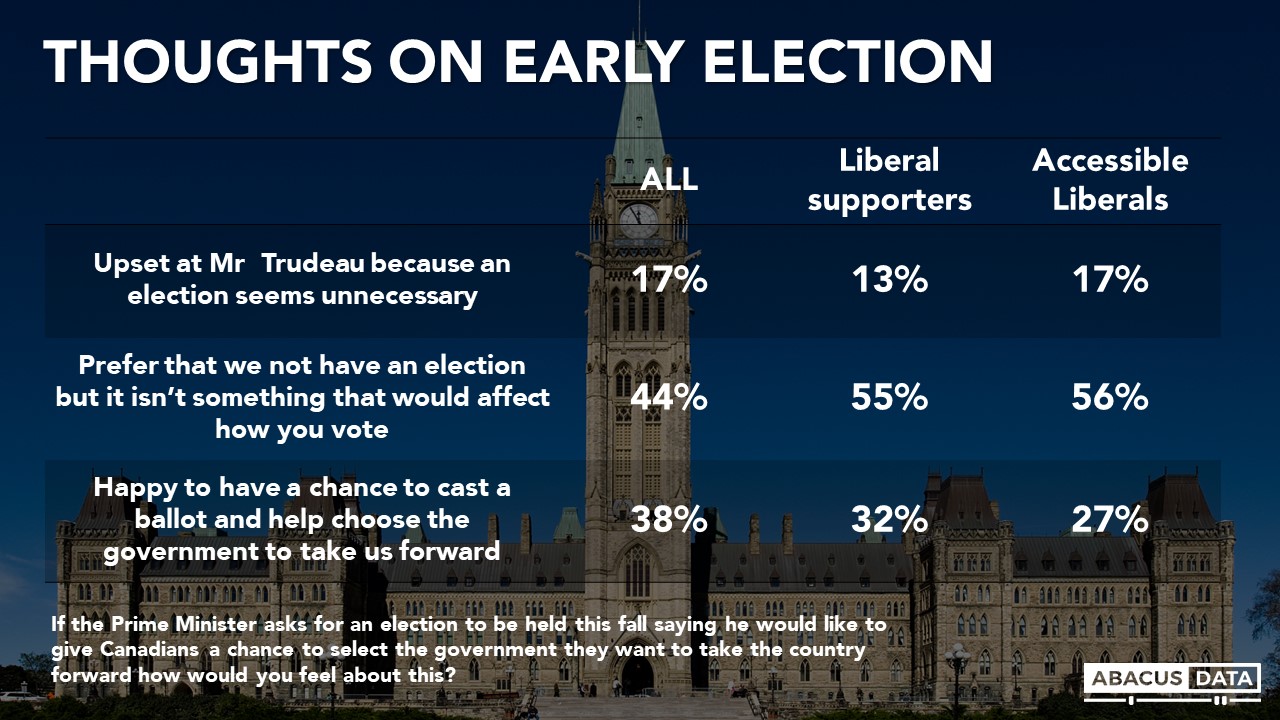 WHAT IF THERE’S A 4TH COVID WAVE?

We asked how people would react if a fourth COVID wave happens during an election campaign. Two-thirds (66%) say it wouldn’t have any effect on how they vote, 20% would be angry enough not to vote Liberal while 14% say they would be more likely to vote Liberal because they feel they have don’t a reasonable job already managing the pandemic.

Those who say they would be angry enough not to vote Liberal include 10% of current Liberal supporters and 20% of accessible Liberals. 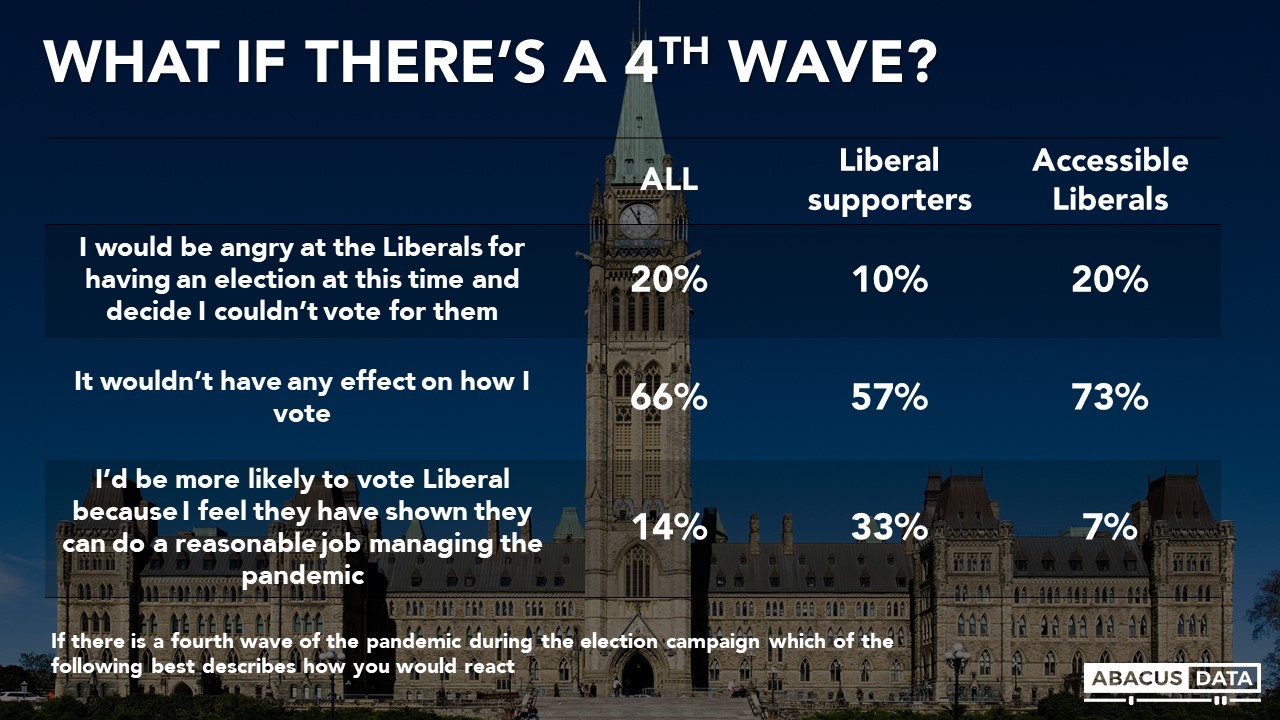 MOOD OF THE COUNTRY

In contrast, views about the direction of the US and the world more generally have turned more negative. While 38% of Canadians felt the US was headed in the right direction in June, today 25% feel the same way – a 13-point swing likely related to the rapid increase in COVID-19 cases in the US among the large unvaccinated population. 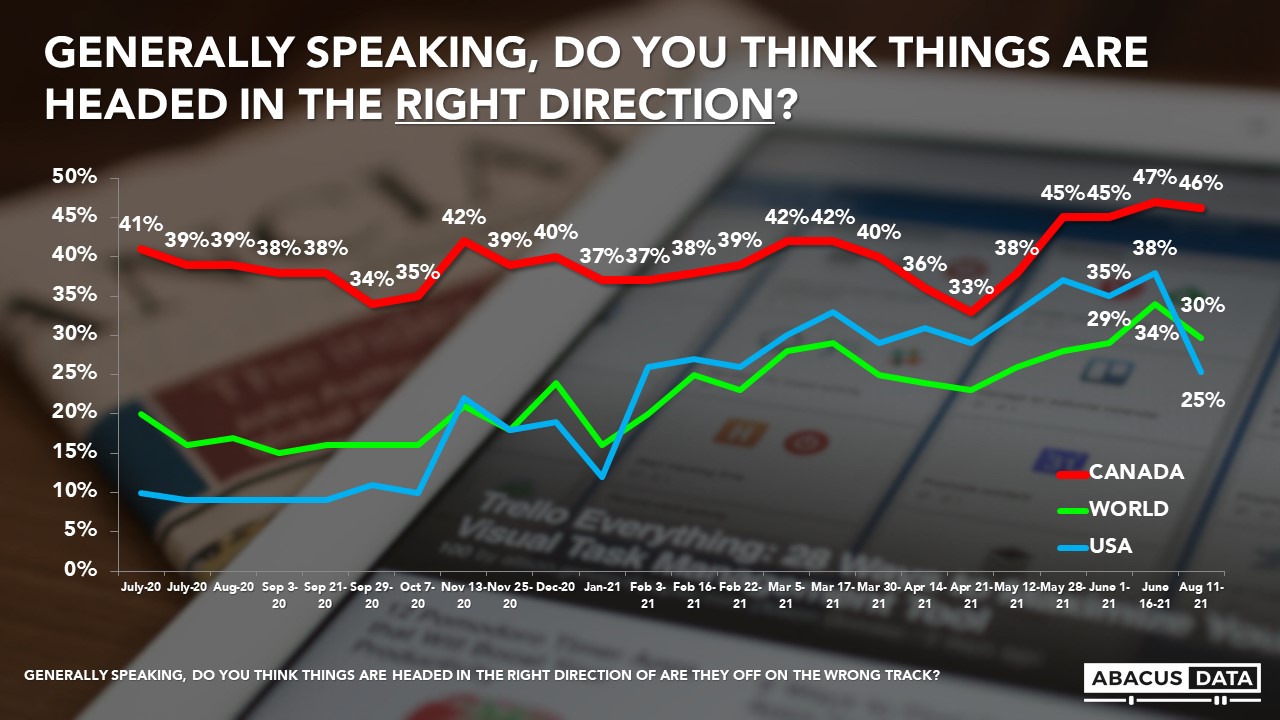 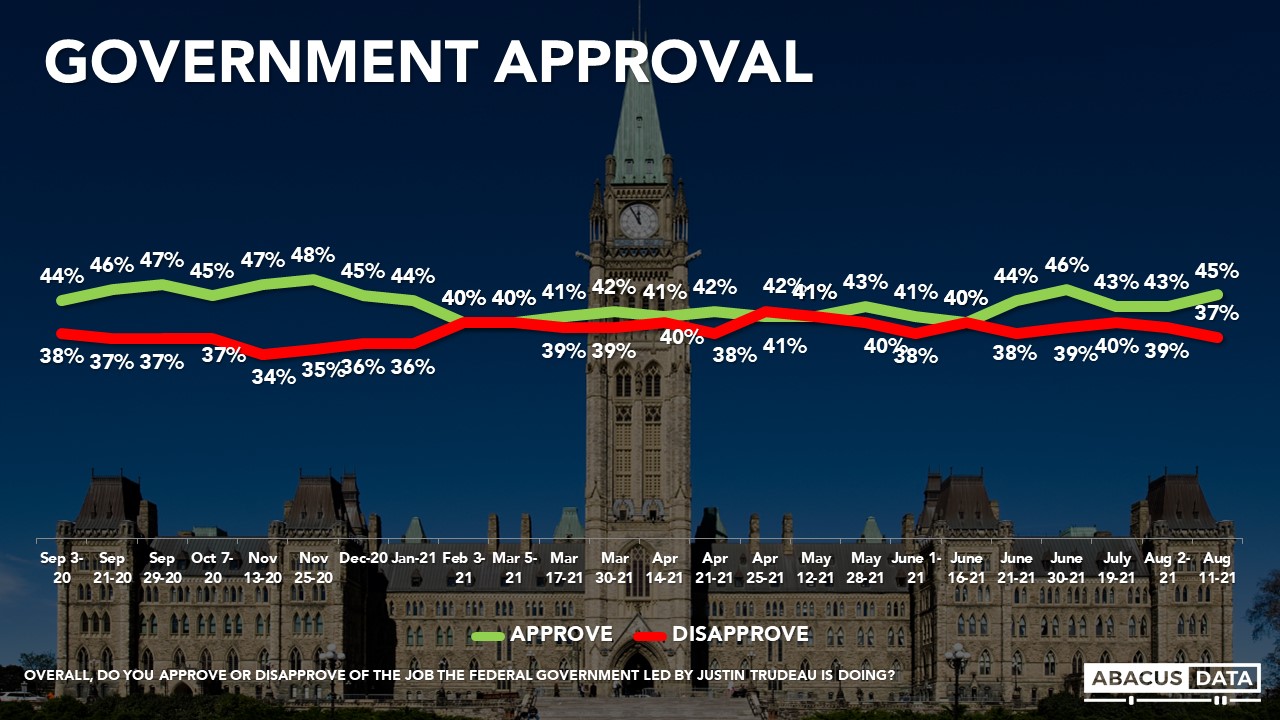 Over the past few months, the desire for change has inched up but is still far below views held at the end of the last campaign in 2019.

Today, 43% say it’s definitely time for a change in government while another 23% think it would be good to have a change (66% want change), but it’s not that important to them. In contrast, 20% say it’s definitely best to keep the Liberals in office while another 13% would like to keep the Liberals but say it’s not that important to them (33% want Liberals re-elected).

To put this in context, the strong desire for change is 9-points lower overall today than when Canadians voted on Election Day in 2019 (43% vs. 52%) – an election in which the Liberals won the most seats in the House of Commons. 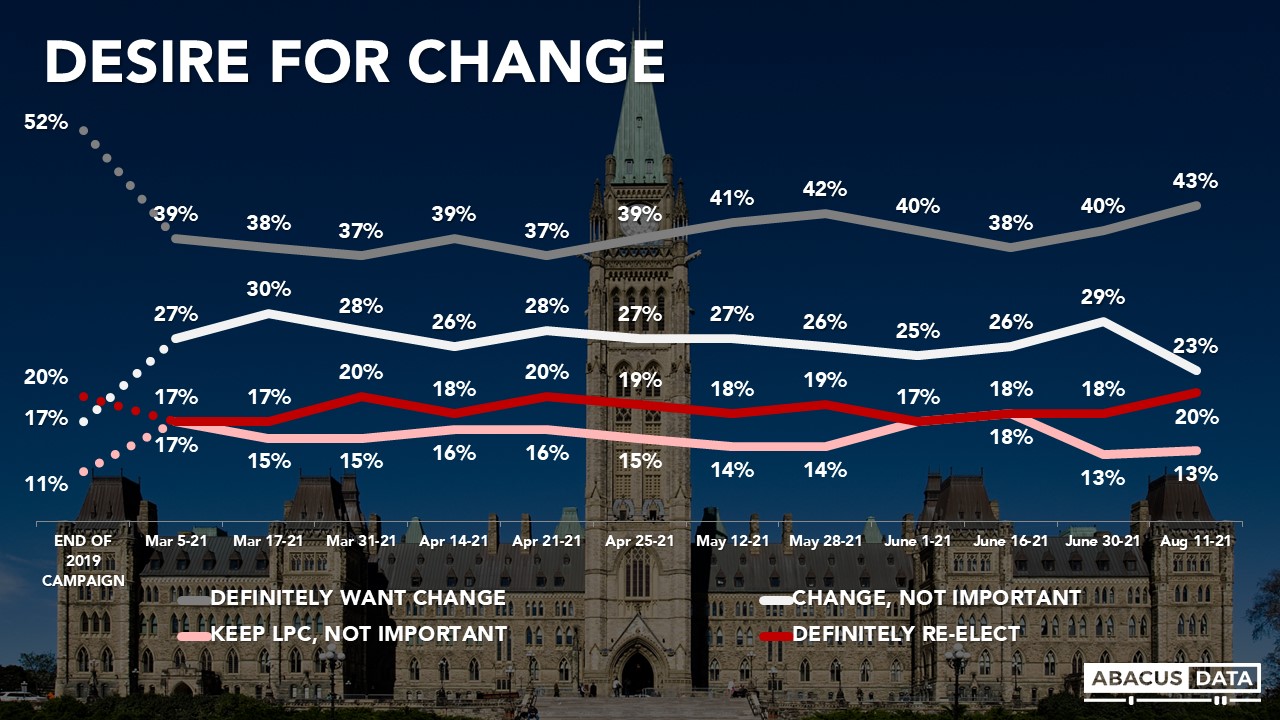 Mr. Trudeau is more popular with women (+7), Atlantic Canadians (+19), Ontarians (+8), and those who self-ID as a racialized Canadian (+20). Among Liberal supporters he is +83 and among Liberal accessible voters (those open but not currently voting Liberal) he is +23. 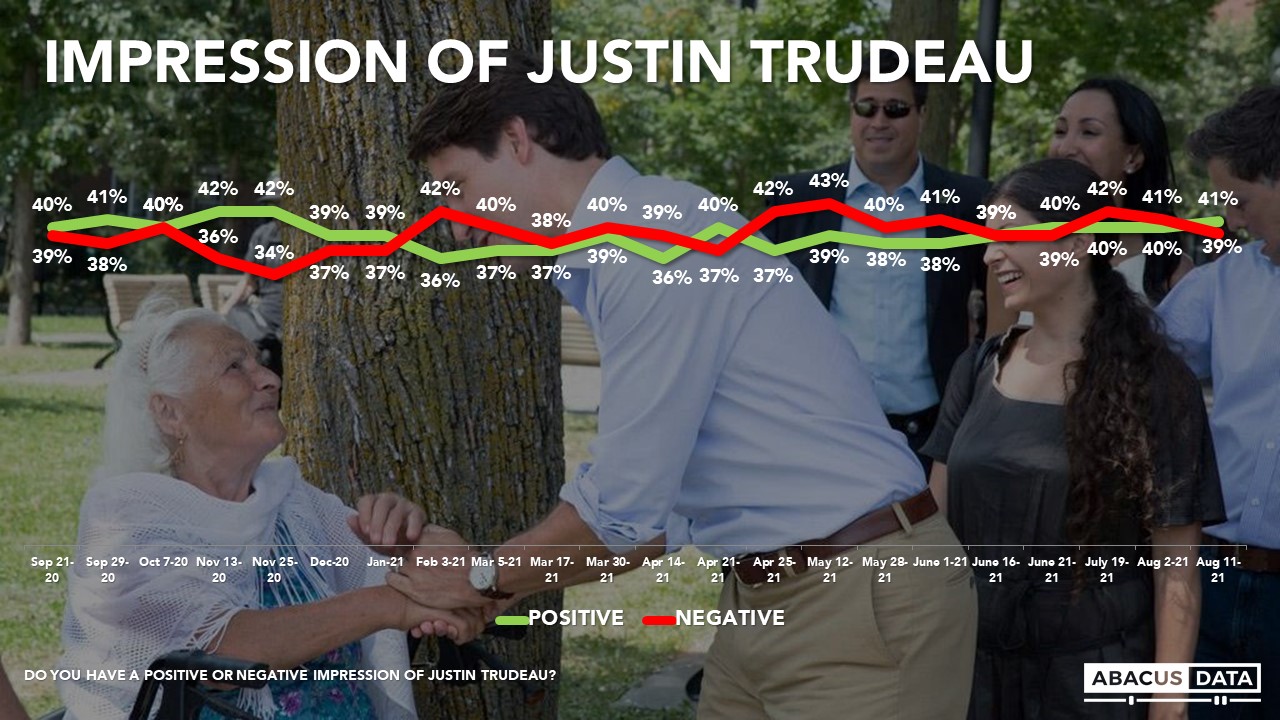 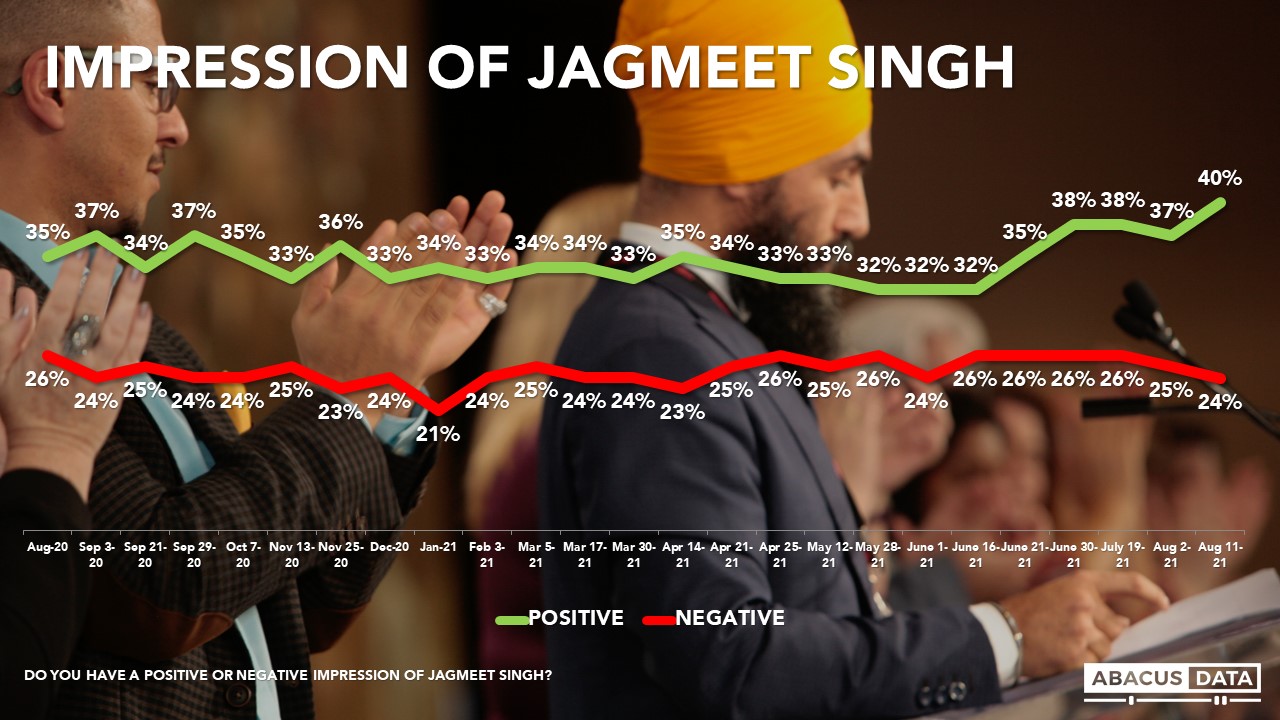 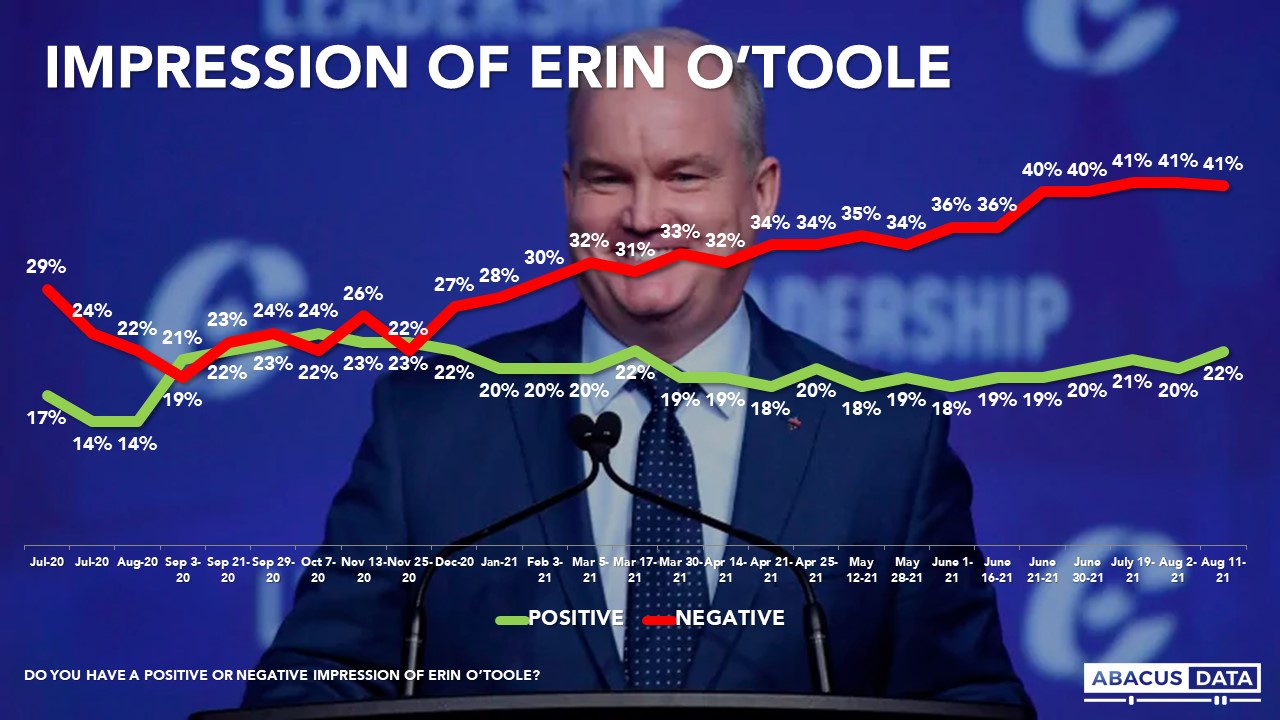 In short, the Liberal and NDP leaders are both in stronger reputational shape than they were in 2019 and the Conservative leader is in a worse position. Trudeau has improved by a net 11, Singh by a net 19 and O’Toole is a net 16 worse than where Scheer was at. 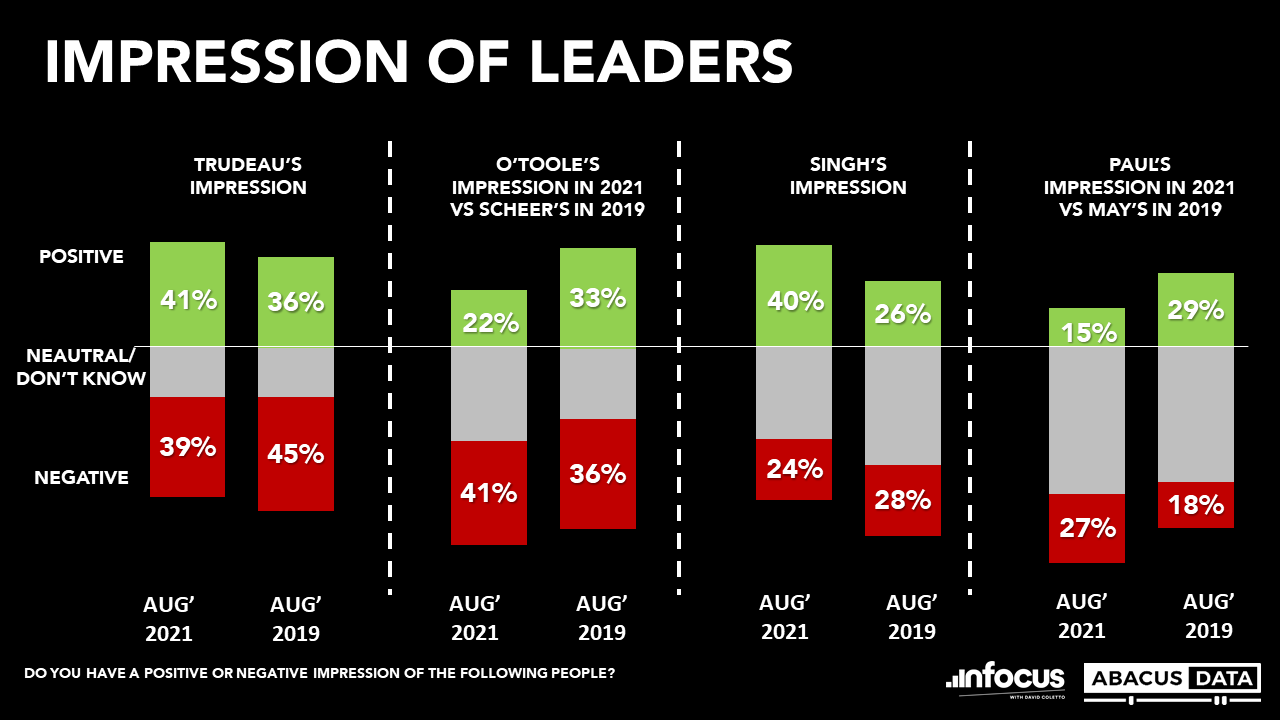 HOW DOES THIS TRANSLATE INTO VOTE INTENTION?

If an election were held now, the Liberals would win 37% of the vote, the Conservatives 28%, the NDP 20%, the Green Party 5% and the BQ at 22% in Quebec (15-points behind the Liberals and down 9 points since earlier this month). The People’s Party captures 4% of the vote, the highest we have had in our tracking while the Maverick Party is at 0% nationally but registers a bit in Alberta (1%) and MB/SK (2%). 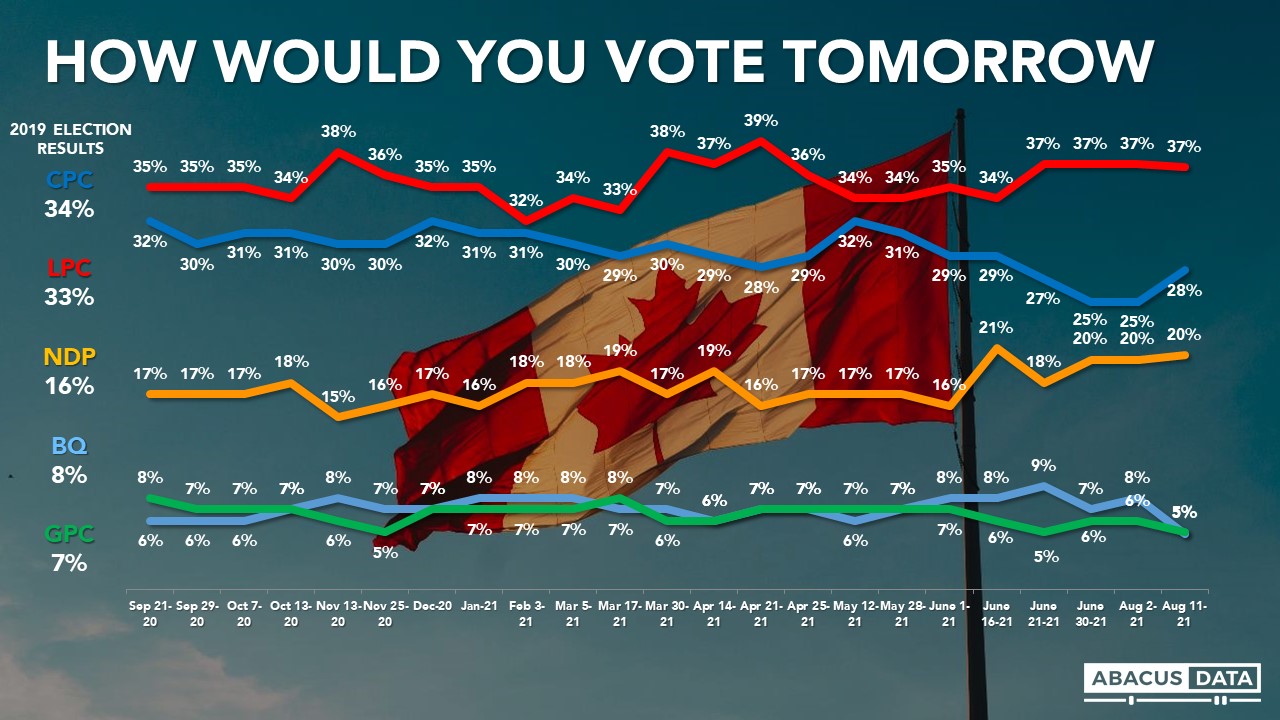 • In Manitoba and Saskatchewan, the Conservatives are only slightly ahead of the Liberals (36% to 31%). 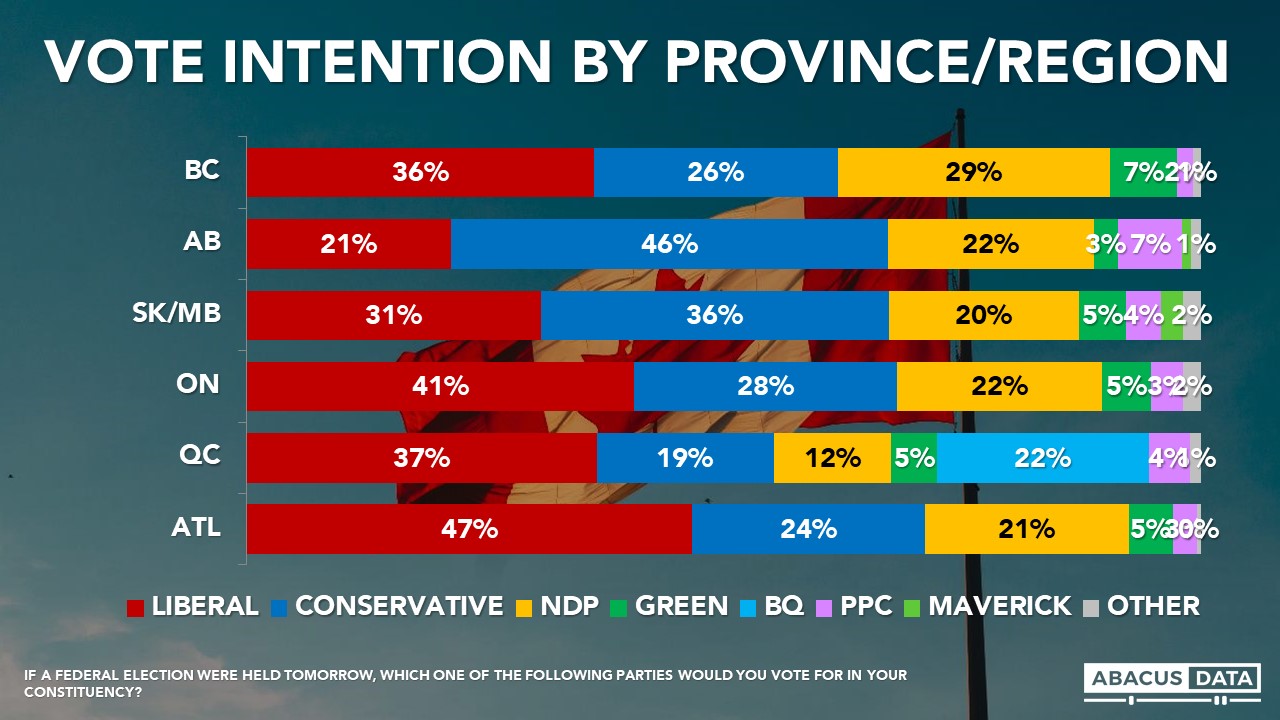 We are also resuming testing levels of motivation, by asking people how likely they are to turn out and cast a ballot on election day. Among the 77% of respondents who said they would definitely be voting, the Liberals lead by 9 as well: 38% Liberal, 29% Conservative, 20% NDP, 5% BQ and 4% Green. 4% would vote for the People’s Party.

WHAT IMPACT COULD THE PEOPLE’S PARTY AND MAVERICK PARTY HAVE? 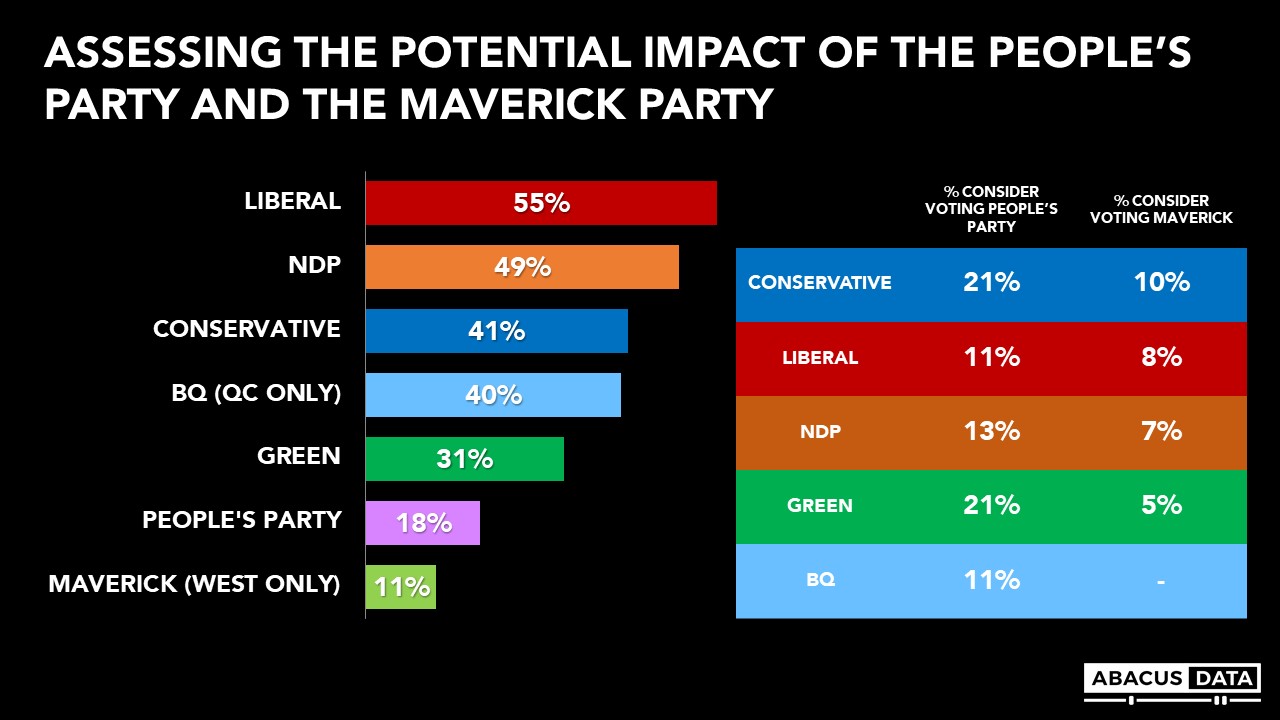 WHAT OUTCOME WOULD PEOPLE PREFER? 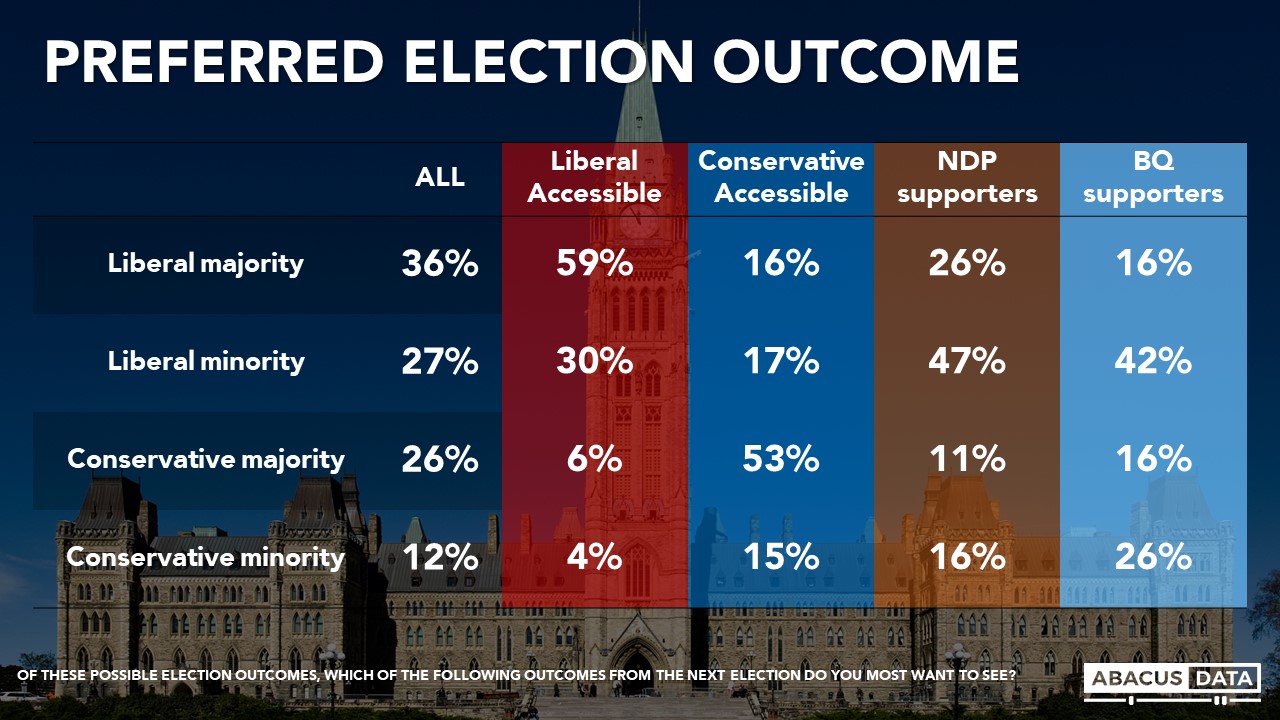 WHICH PARTY DO CANADIANS THINK WILL WIN?

Almost half of Canadians surveyed think the Liberals are going to win the election (45%) while 18% think the Conservatives will win and 9% think the NDP. 23% are unsure.

• Among Conservative supporters, 61% think the CPC will win while 20% think the Liberals will.

• Among Liberal supporters, 86% think the LPC will win while 4% think the Conservatives will. 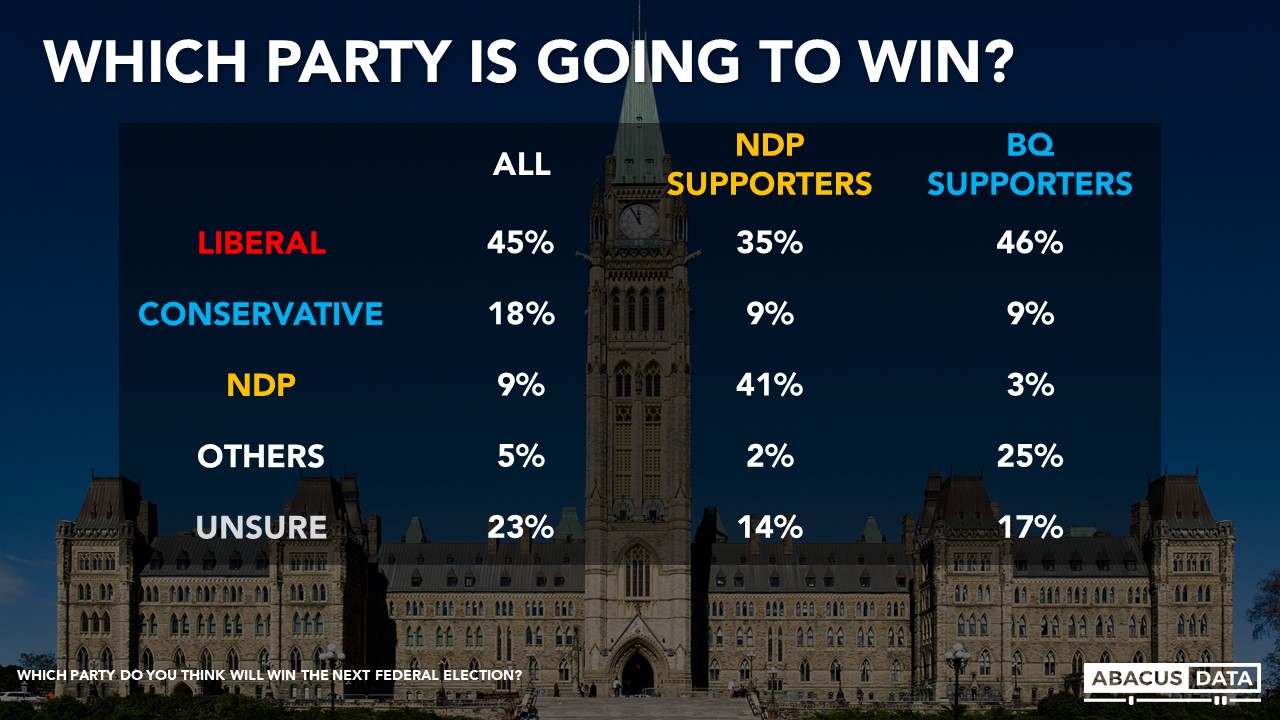 According to Bruce Anderson: “Canadians don’t particularly want an election, but mostly won’t take umbrage at the prospect of one. The big questions for me are these:

How splintered is the Conservative coalition and is it/will it be as motivated as it has tended to be since the time of Stephen Harper? Fighting over marijuana legalization, carbon pricing, SNC Lavalin all seemed more rallying than umbrage with China and the other current points on offer from the Conservatives. Conservatives will have the most money but will they have the most motivated voters, especially given one in five of them think the Liberals will win?

Is the likeability of Jagmeet Singh going to translate into seats? Recently it seems the Liberals may have been working pretty hard to close off risks on the left and appeal to progressive voters who were disappointed in them. Will those voters mark a ballot for a strong NDP caucus or stay home, or vote Liberal?

Voters don’t usually reward governments but it’s hard not to imagine that the general satisfaction with the direction of the country and the handling of the pandemic is not part of the math that gives the Liberals the lead today. Will this election be as much about Justin Trudeau the leader as 2015 or 2019, or more about the policy direction he proposes and the lack of a strong desire for change.?

According to David Coletto: “If the federal election campaign kicks off this weekend, the Liberals remain in a strong position not only to win the most seats, but perhaps win a majority.

Few say they would be upset with the Prime Minister for the early election call (including only 13% of Liberal supporters) so the risk of backlash from an election seems small.

The mood of the country has not been this positive in years, fewer disapprove of the federal government’s performance than at any time in 2021, the desire for change remains much lower and dislike for Mr. Trudeau is far less intense. When the 2019 campaign started, the Liberals trailed the Conservatives by 4. Today they lead by 9.

But that doesn’t mean a Liberal victory is a forgone conclusion. There are a few things I’d watch closely.

The first is whether the NDP can capitalize on the goodwill Mr. Singh has developed. He’s the most popular leader and the NDP’s pool of accessible voters is larger today than when the 2019 campaign started. Perhaps more important, people think the Liberals will win giving those inclined to vote NDP freedom to vote NDP given the chance of a Conservative government seems so low.

Second, while Mr. O’Toole’s personal numbers are quite weak, many still don’t know much about him giving him an opportunity to introduce himself to people for the first time and try and change some people’s views of him. He starts the campaign well back and a short campaign may not give him enough time to catch up – but I wouldn’t completely count him and the Conservatives out at this point.

Finally, tracking interest in the campaign will be critical to understanding likely turnout. Who is more motivated and who will turnout? What impact will early voting and mail voting have? We will continue to track that over the campaign to better understand the impact of turnout on the outcome.

The survey was conducted with 3,000 Canadian adults from August 6 to 11, 2021. A random sample of panelists were invited to complete the survey from a set of partner panels based on the Lucid exchange platform. These partners are typically double opt-in survey panels, blended to manage out potential skews in the data from a single source.

The margin of error for a comparable probability-based random sample of the same size is +/- 1.8%, 19 times out of 20. 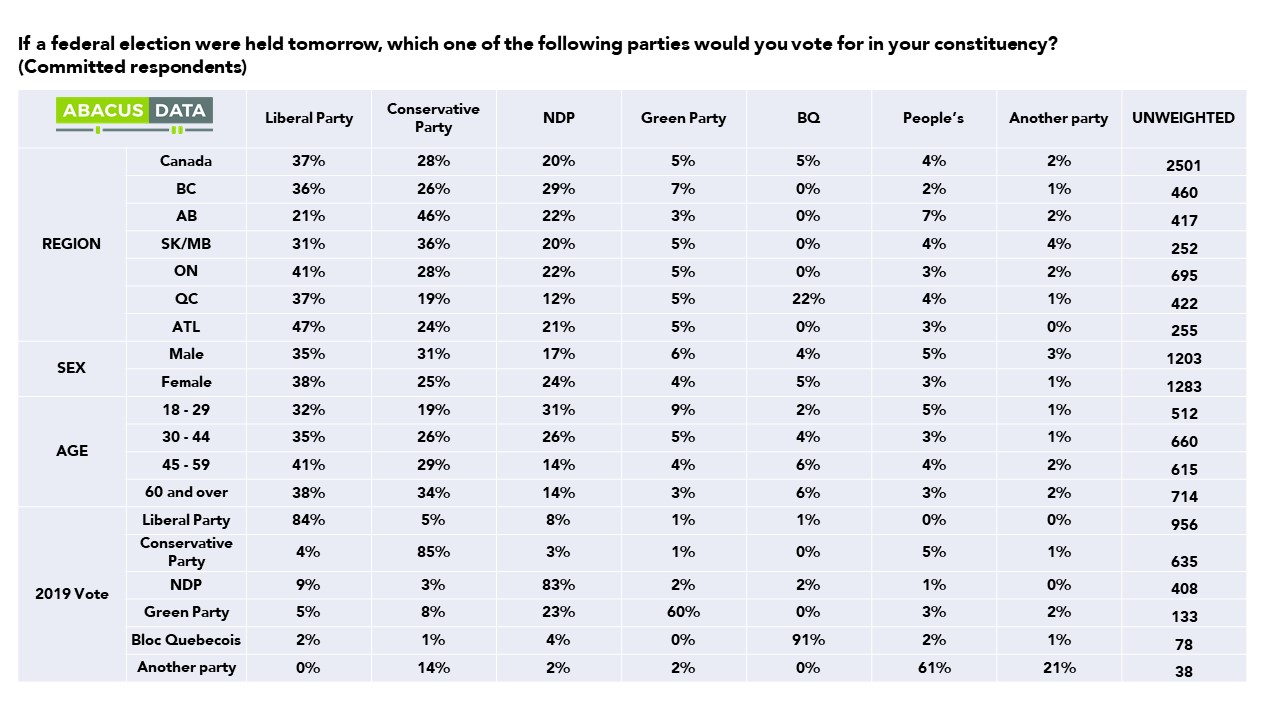