After the first week of the campaign, here’s what we are seeing: 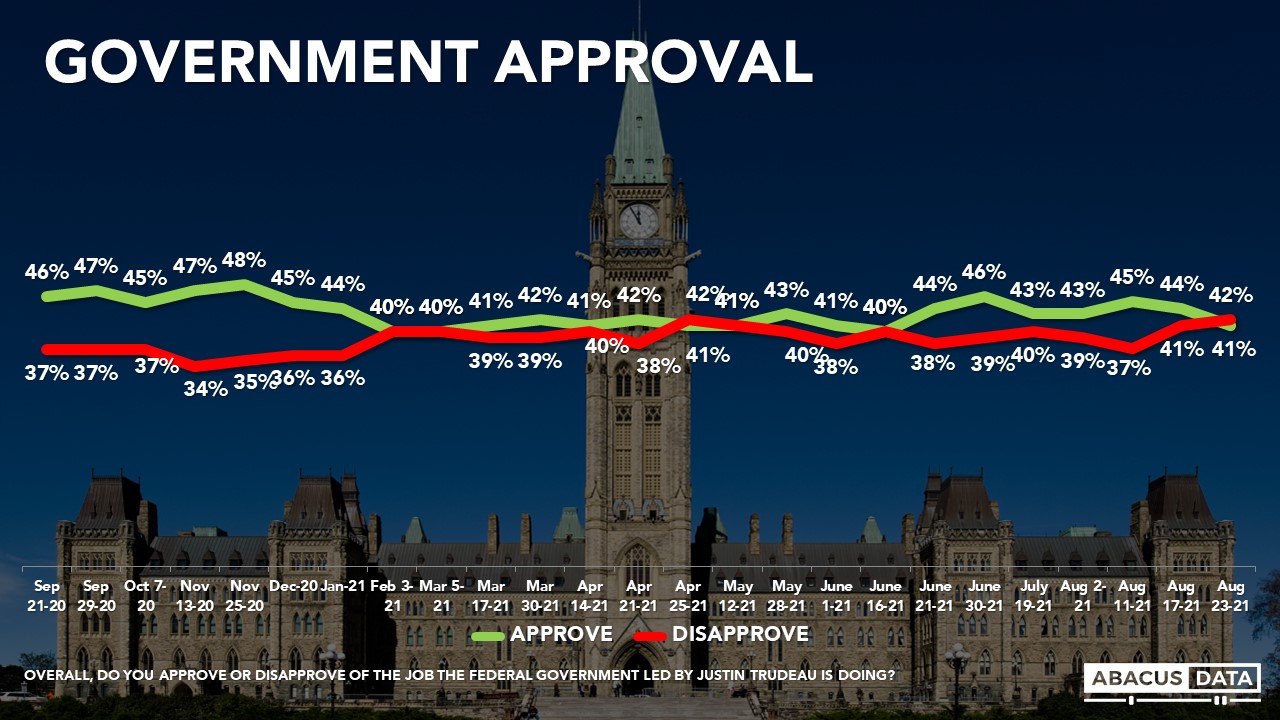 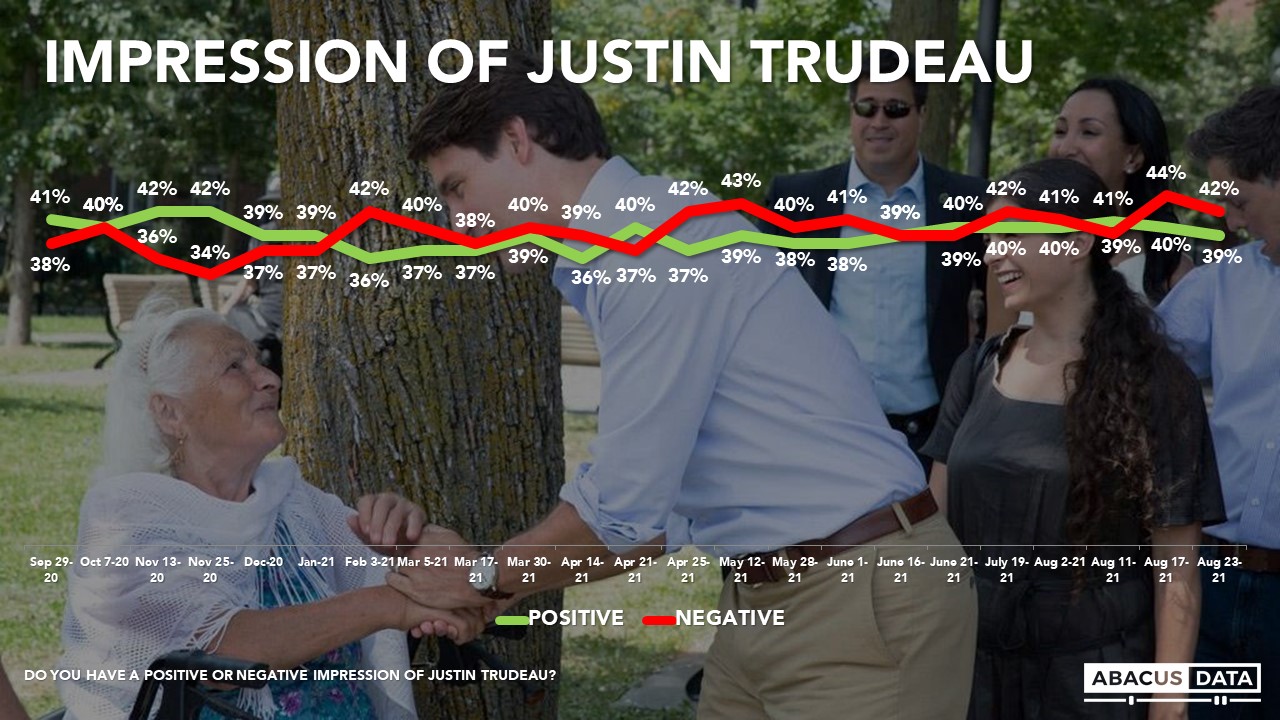 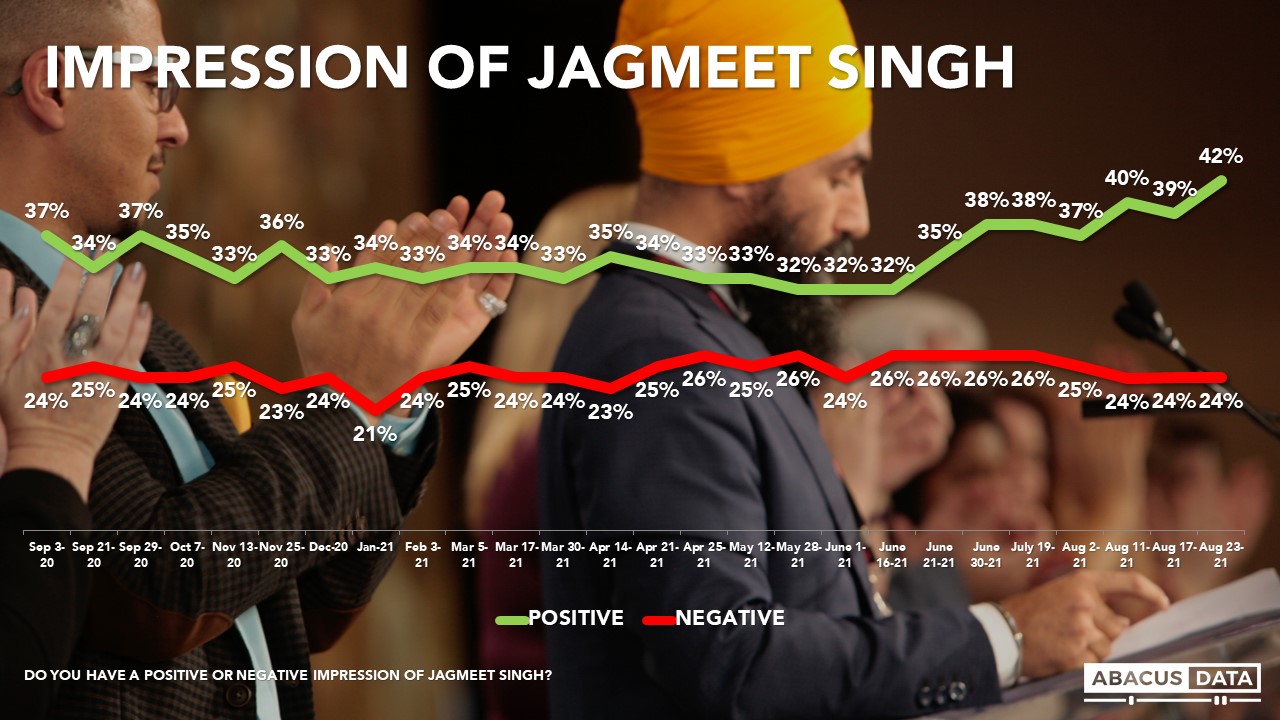 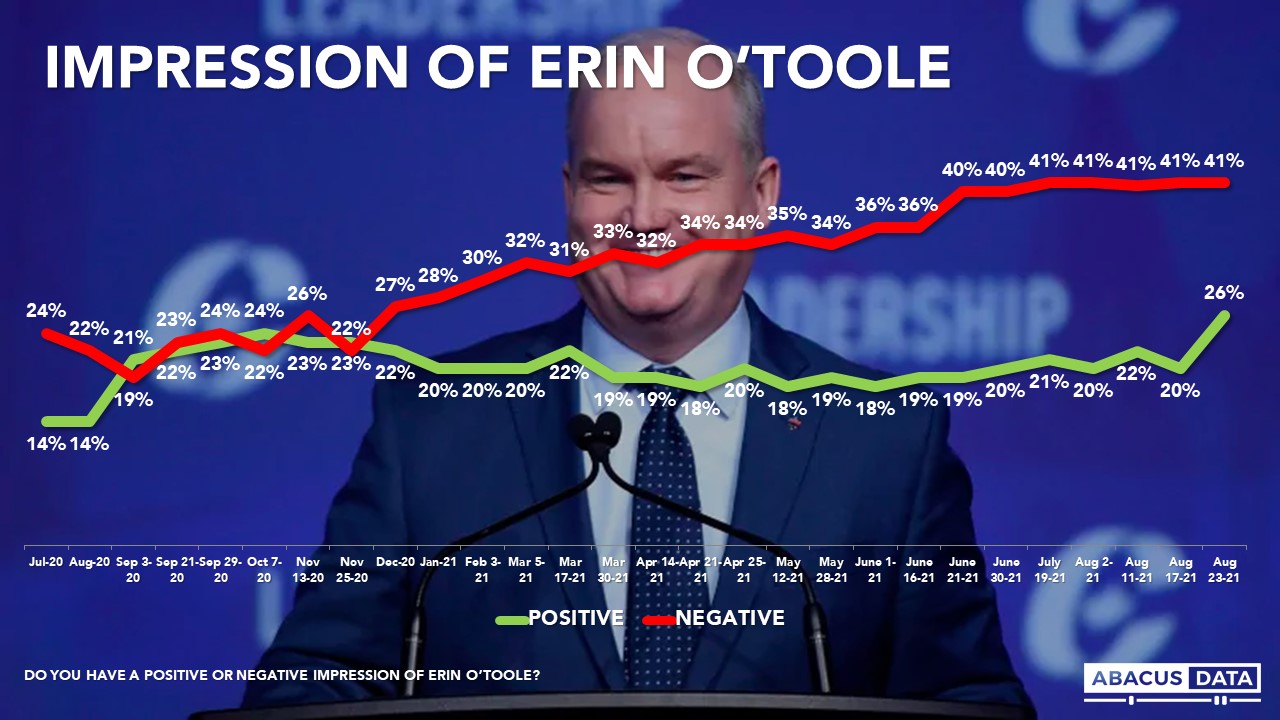 • Justin Trudeau: 20% say their impressions are improving, 36% declining, for a momentum score of -16. Among those open to voting Liberal but not currently supporting the party, 18% say their views of Mr. Trudeau are improving while 25% say they are declining (score -7).

• Jagmeet Singh: 32% say their impressions are improving, 16% declining, and 52% not changing for a momentum score of +16. Among those open to voting NDP but not currently supporting the party, 41% say their views of Mr. Singh are improving while 5% say they are declining (score +36).

If the election were today: 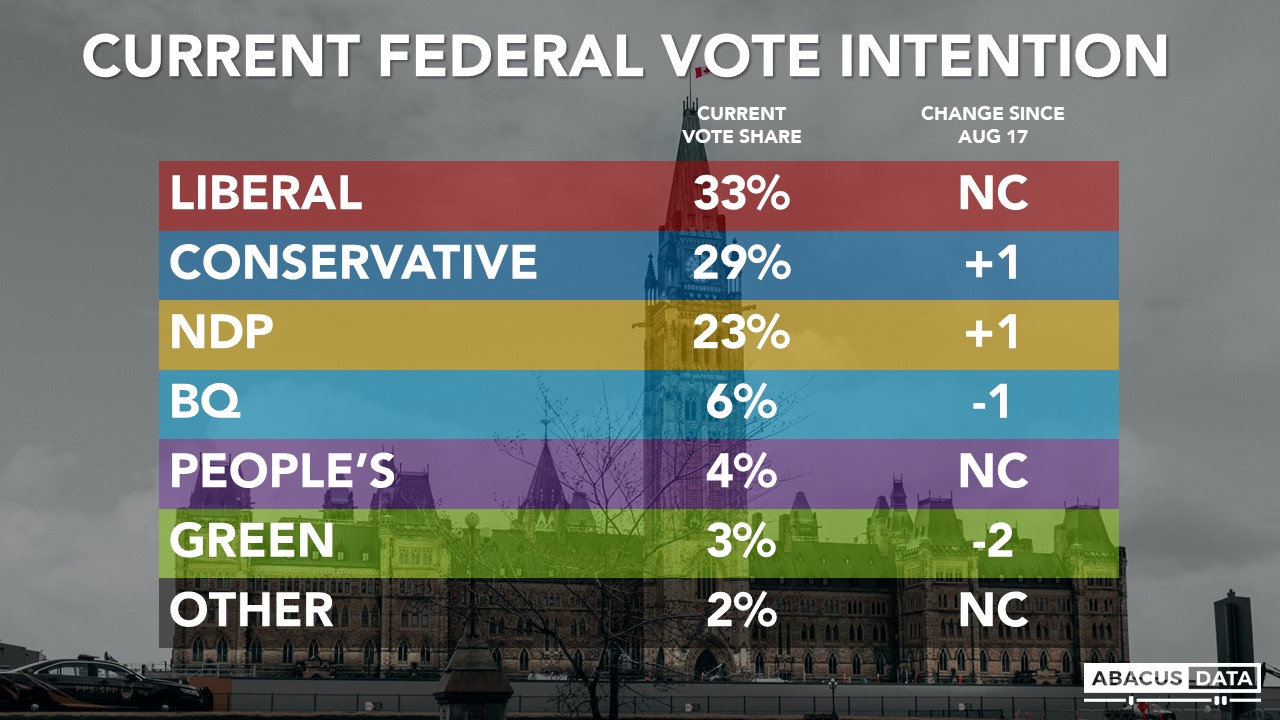 • In Manitoba and Saskatchewan, the Conservatives lead by 9 over the NDP and Liberals. 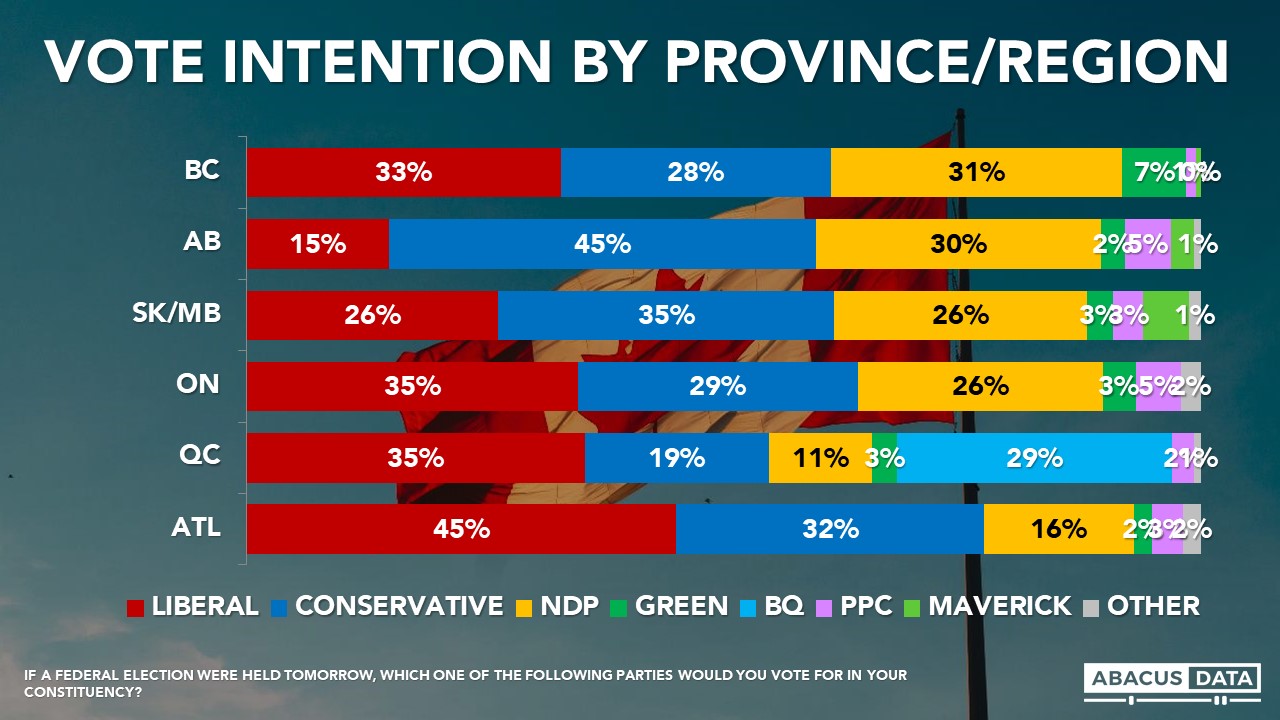 Some additional breakouts that are worth noting: 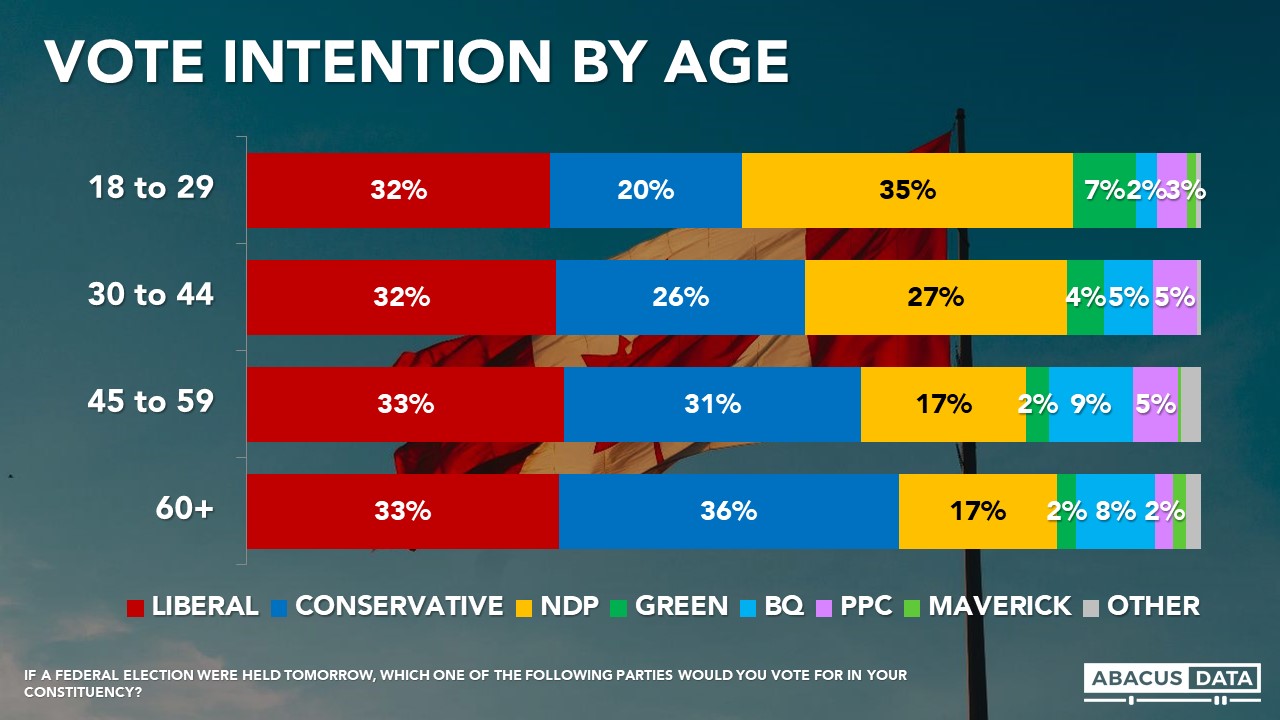 • Among union members, 38% would vote Liberal, 28% Conservative and 21% NDP. The NDP does slightly better among those who are not unionized.

VOTE BY THOSE WHO SAY THEY DEFINITELY WILL VOTE

Among the 72% of respondents who said they would definitely be voting, the Liberals and Conservatives are tied at 31% with the NDP at 22%. The BQ is at 7%, the People’s Party at 4%, and the Greens at 3%. 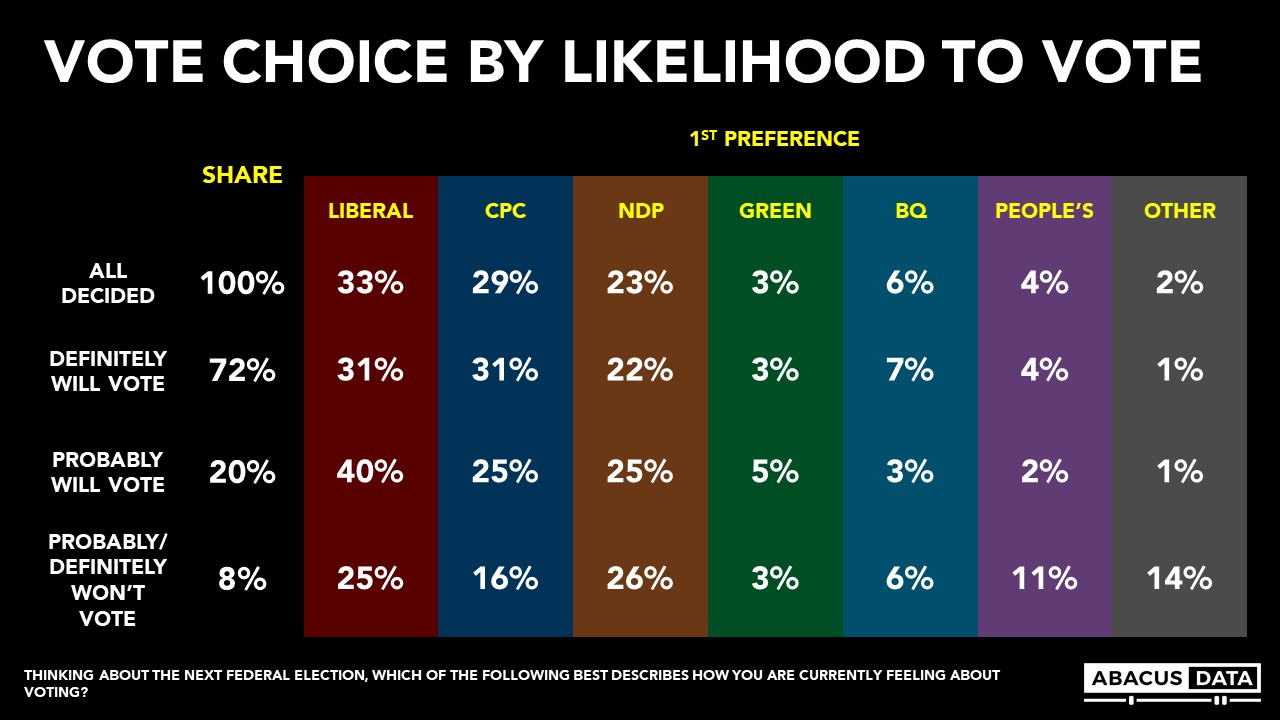 Right now, 60% of decided voters say they have made up their mind and won’t change while 40% say they could still change their mind about who to vote for. 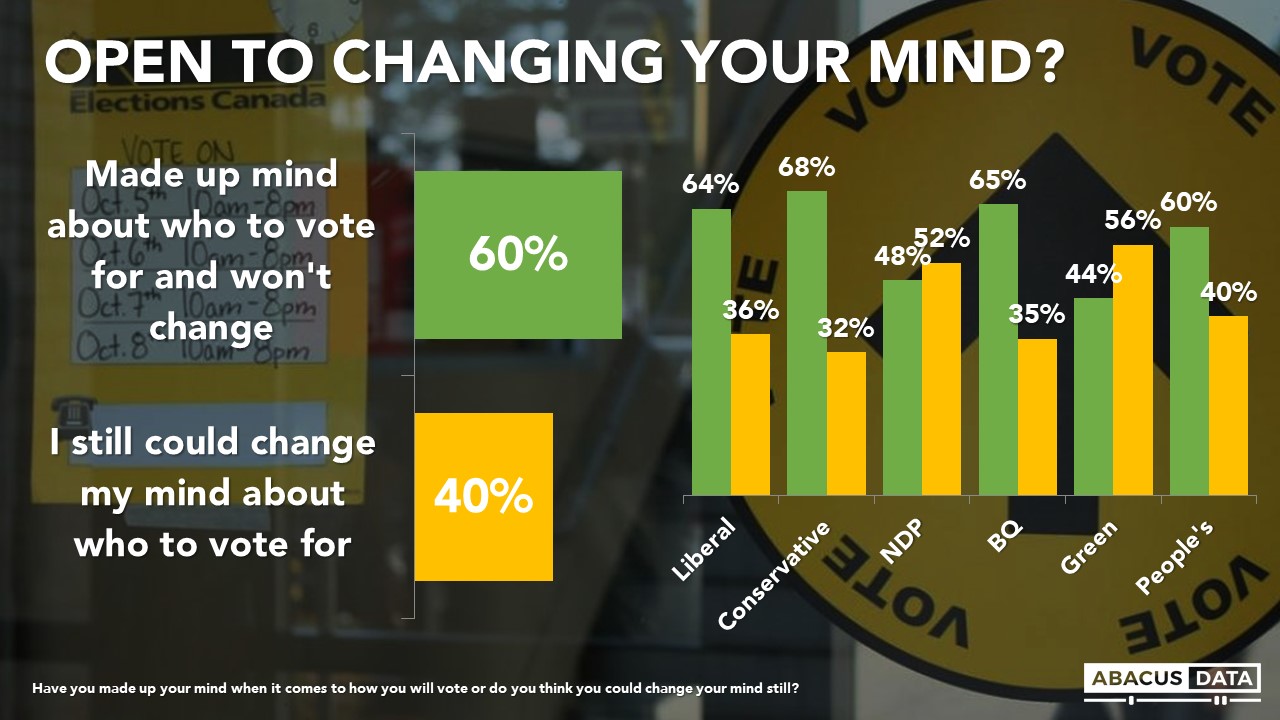 To understand the potential shifts in the electorate over the final four weeks of the campaign, we identify two key voter groups: LPC/CPC switchers and LPC/NDP switchers.

76% think the Liberals are going to win the election versus 14% who think the NDP will win. 7% are unsure.

When asked to select the top two issues from a list, 30% selected cost of living, 29% selected climate change, 24% improving the healthcare system and 20% selected making housing more affordable. 16% said getting more people vaccinated and getting the country back to normal quicker was a top 2 issue for them.

62% have a positive impression of Mr. Trudeau compared with 42% for Mr. O’Toole although 44% have a neutral opinion of Mr. O’Toole.

When asked to select the top two issues from a list, 29% selected improving Canada’s health care system, 28% picked growing the economy, and 26% reducing the cost of living. 18% said getting more people vaccinated and getting the country back to normal quicker while 14% picked climate change and reducing carbon emissions.

A CLOSER LOOK AT ONTARIO

In Canada’s most populous province the Liberals hold a 6-point lead over the Conservatives (35% to 29%) which is unchanged from last week. The NDP is not far behind at 26%.

Some other insights to consider:

• Leader Impressions: While positive impressions of Mr. Singh are largely consistent (before election call 43%, today 42%), those with positive views of Mr. O’Toole in Ontario are up 3 (21% to 24%) and Mr. Trudeau’s positives are down marginally by 2-points (43% to 41%).

• Desire for Change: There has been no change in the more intense desire for change in Ontario. Before the campaign, 43% of Ontarians definitely wanted a change in government, the same number as today.

When asked how they think they will vote in this election, 34% said they planned to vote in person on Election Day, 28% planned to vote at an advance polling location before election day, while 21% intend to vote by mail. 17% were not sure yet.

Among those who say they will definitely be voting in the election, 38% plan to vote in person on Election Day, 31% at an advance poll, and 18% by mail. 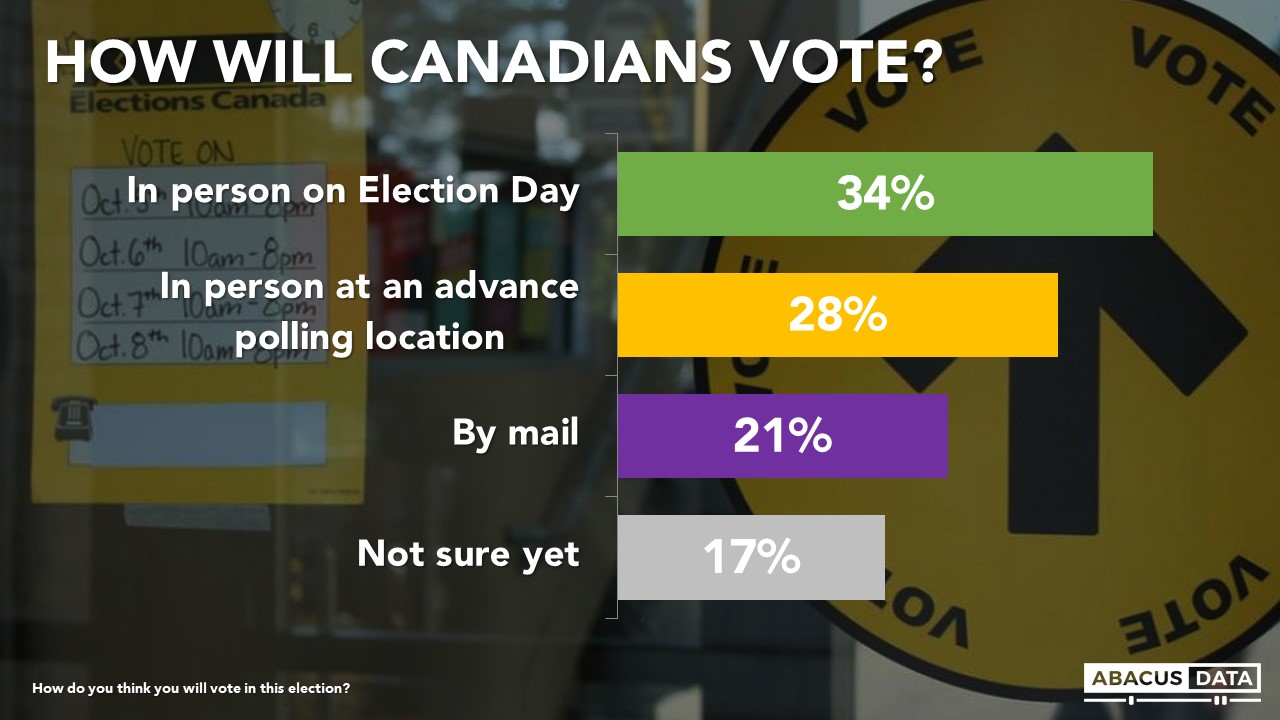 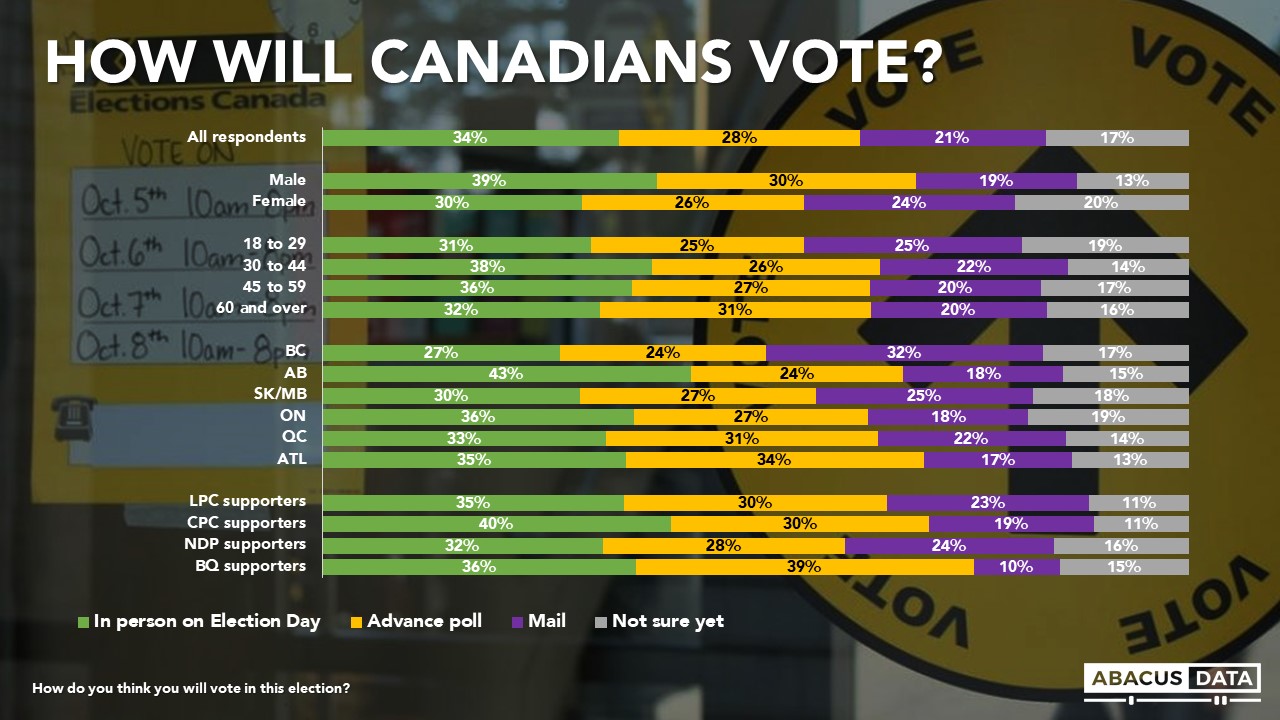 According to Bruce Anderson: “Voters are signalling that now that the hypothetical election is an actual election, they will consider their choices carefully, and are open to persuasion. There’s no doubt that younger voters in particular are showing high levels of interest in the NDP as we’ve reported on for a few months and this trend is continuing. Erin O’Toole is out of the gates well, but still has an image deficit relative to his competitors and Conservative vote intention is hobbled a bit by the presence of the People’s Party on the ballot.

The Liberals see competition from the Conservatives among older voters and from the NDP among younger voters. Clearly there is more to be gained or lost with progressive voters, with so many NDP and Green Party voters unsure if they really want a change in government, and definitely preferring a Liberal to a Conservative outcome. It’s too early to read much into the public mood about any specific thing that has happened in the campaign, but it’s not too early to know that a lot of different outcomes are possible, and winning the vote will take real effort and getting those ballots cast will also require an unusual effort by the campaigns.”

According to David Coletto: “After week one of the campaign, the Liberals continue to hold a five-point national lead over the Conservatives and not a lot has changed in many of the metrics we regularly track like mood, desire for change, government approval, or leader impressions.

Mr. O’Toole seems to have made the most progress over the first week as his positives are up 6-points in a week. Although, the Conservative vote share remains below 30%.

Based on our momentum numbers, Mr. Singh likely had the best week with Mr. O’Toole not far behind. Mr. O’Toole seems to have made a lot of progress over the first week as his positives are up 6-points in a week but he still has a wide affinity gap that he will need to close quickly. The NDP are inching up, especially in Ontario, but the Conservatives are still stuck below 30% in our tracking.

If voters want this election to be about affordability, housing, the economy, and climate change, the results of this survey give us some insight into how those potential ballot questions are playing out.

Right now, neither Mr. Trudeau nor Mr. O’Toole has an advantage on the economy. Mr. Singh has a slight advantage on housing, while the Liberals and Mr. Trudeau lead on who voters think is best on climate change.

But when it comes to affordability and reducing the cost of living – the NDP, Liberals, and Conservatives are all within three points of each other and none of them have a clear advantage on the issue more voters say will drive their vote than on any other.”

The survey was conducted with 2,000 Canadian adults from August 17 to 22, 2021. A random sample of panelists were invited to complete the survey from a set of partner panels based on the Lucid exchange platform. These partners are typically double opt-in survey panels, blended to manage out potential skews in the data from a single source.

The survey was commissioned and paid for by Abacus Data Inc. 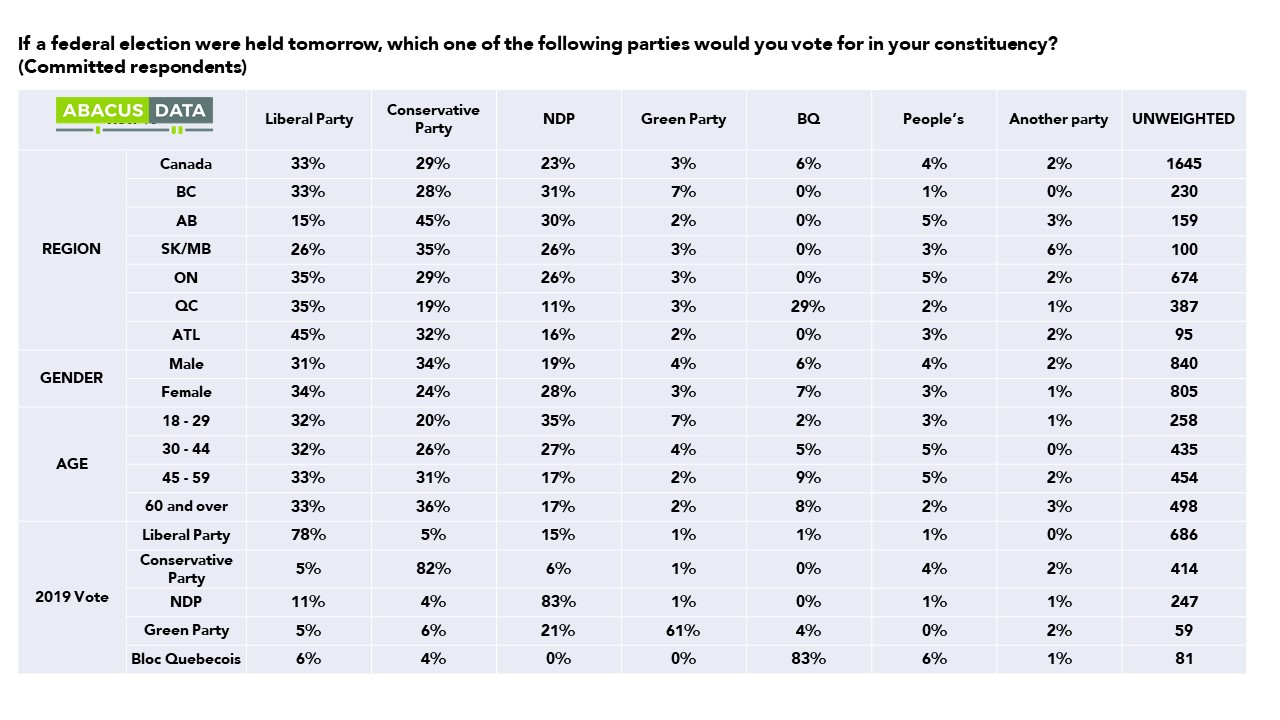 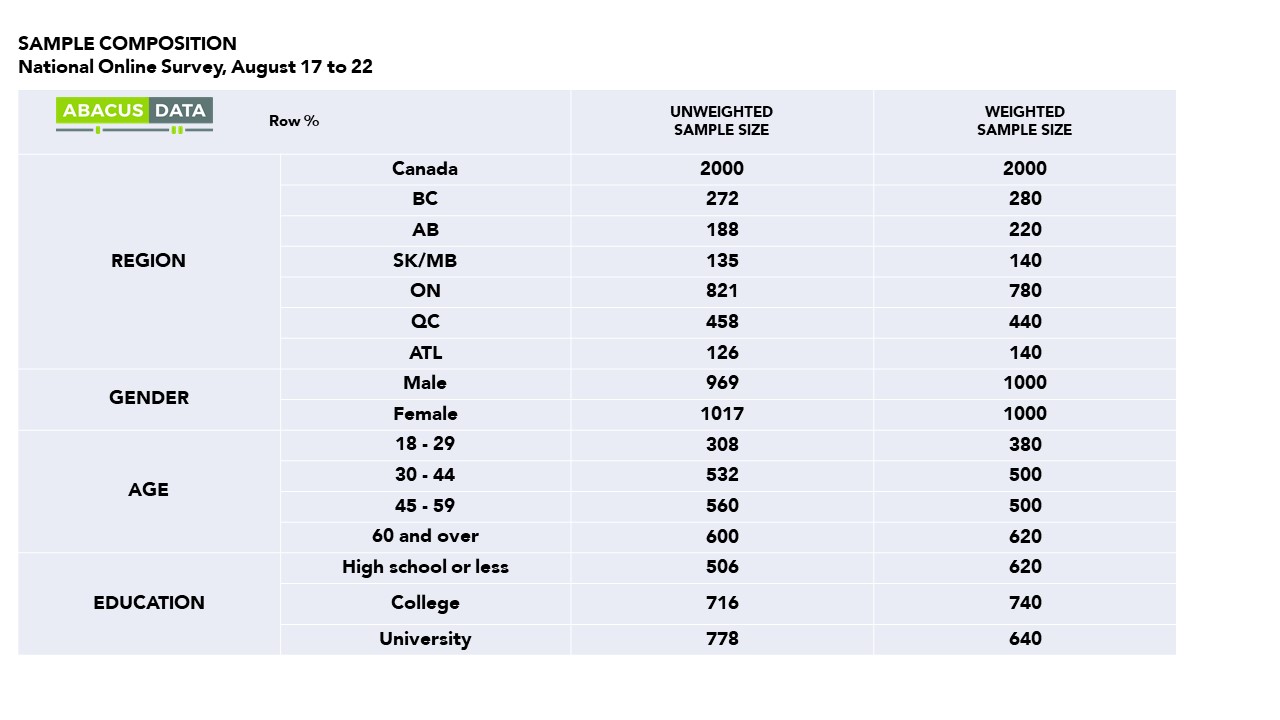