We just completed a national survey of 1,500 Canadian adults (August 12 to 16) with about 30% of the interviews done after the election announcement on Sunday.

Here’s what we are seeing:

MOOD OF THE COUNTRY

Views about the direction of the US and the world also have become more negative since last week as events in Afghanistan and the 4th wave in the US dominate news coverage. 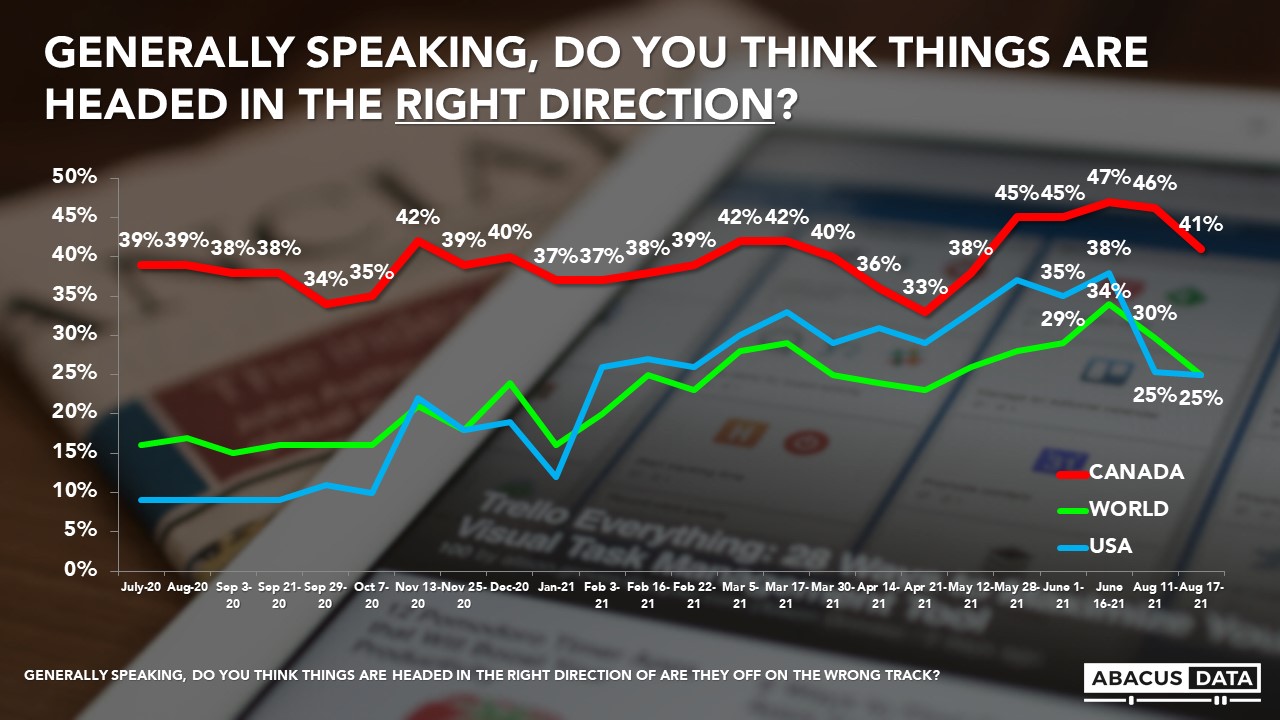 FEELINGS ABOUT THE PANDEMIC

This downward shift in mood is likely attributable to growing concerns about the COVID-19 pandemic. When asked whether they are getting more or less worried about the pandemic over the past few days, 38% say they are getting more worried – up 5-points in a week, and 23-points in a month. Today, 24% believe the worst of the pandemic is still to come (a 9-point increase in a month). 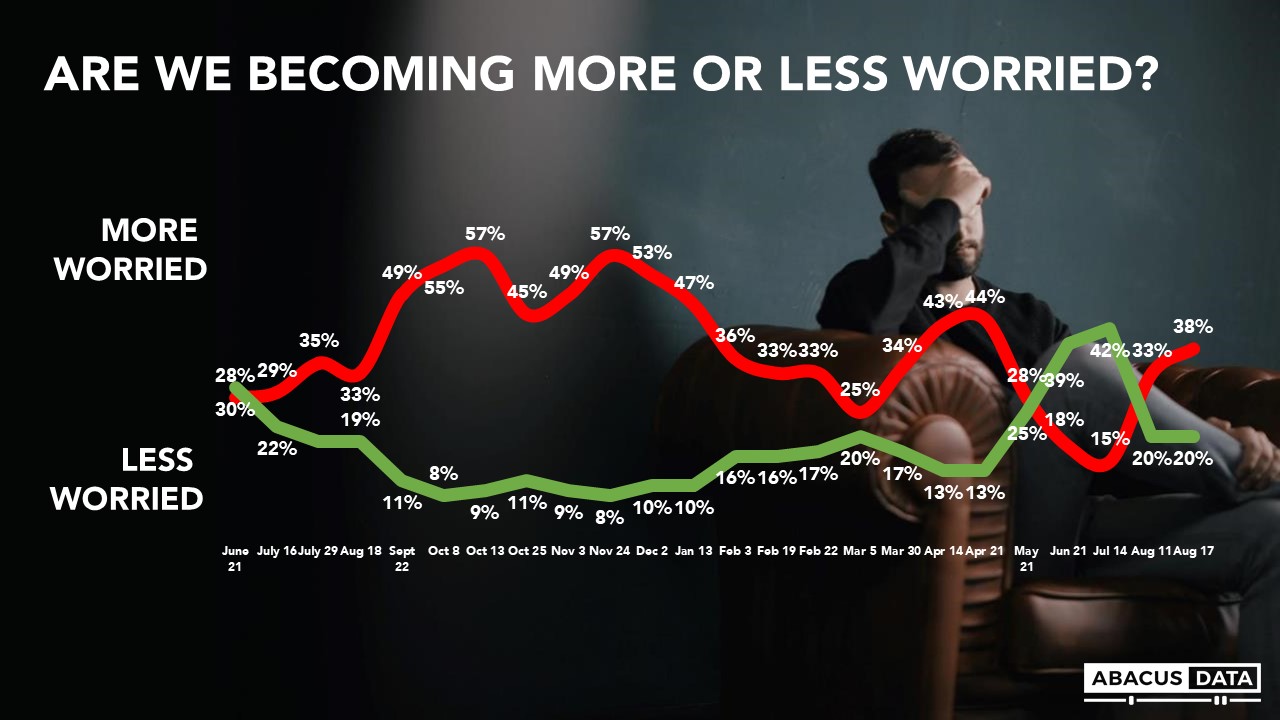 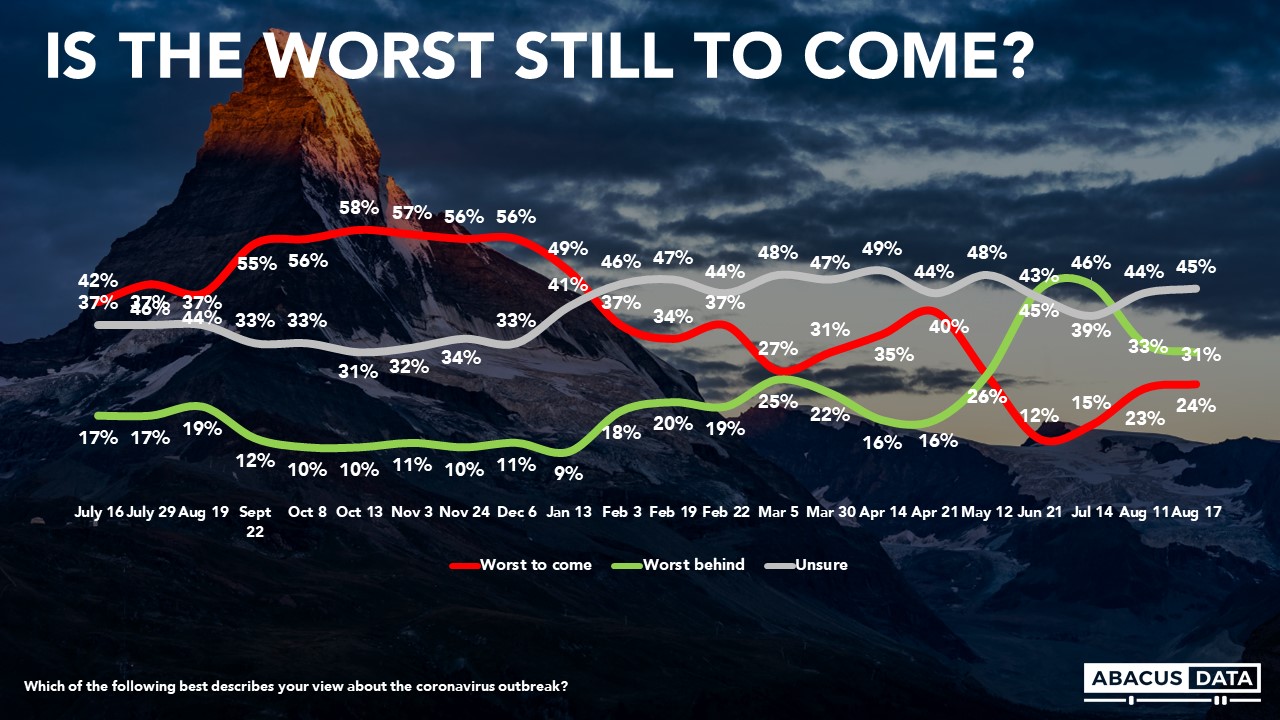 Today 44% approve of the job being done by the Trudeau government, while 41% disapprove – a 4-point increase in those disapproving over the past week. 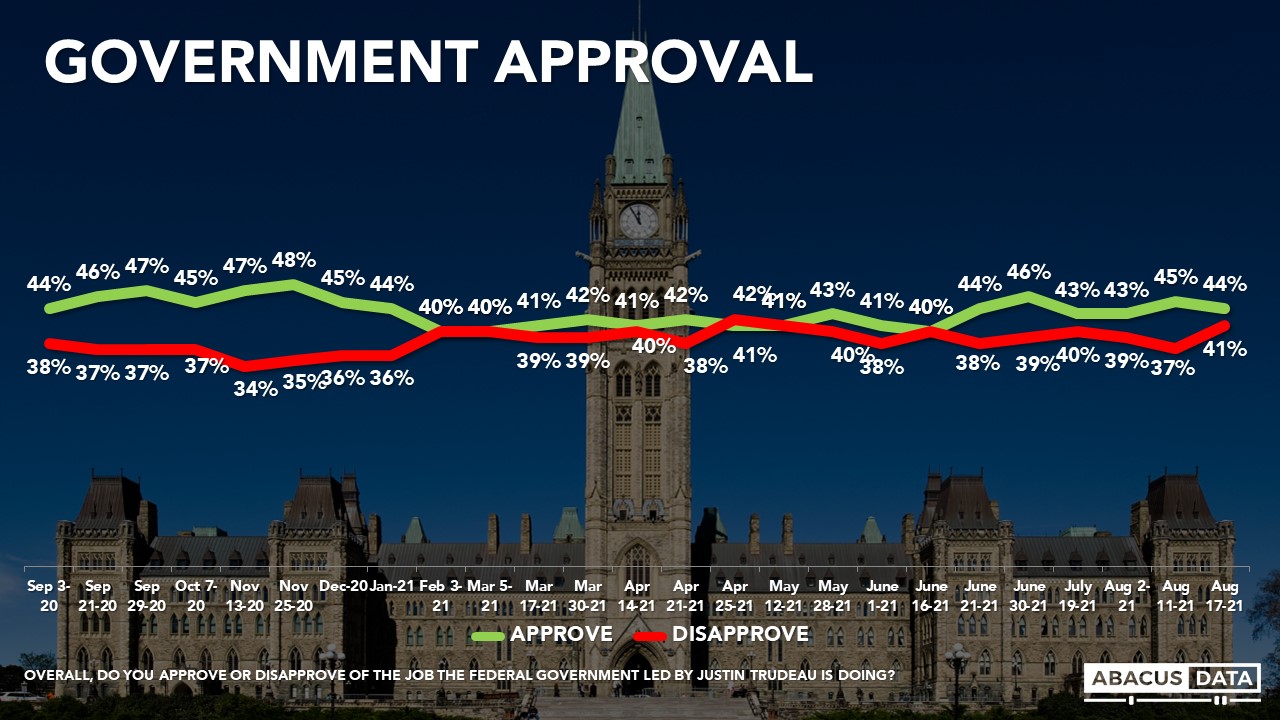 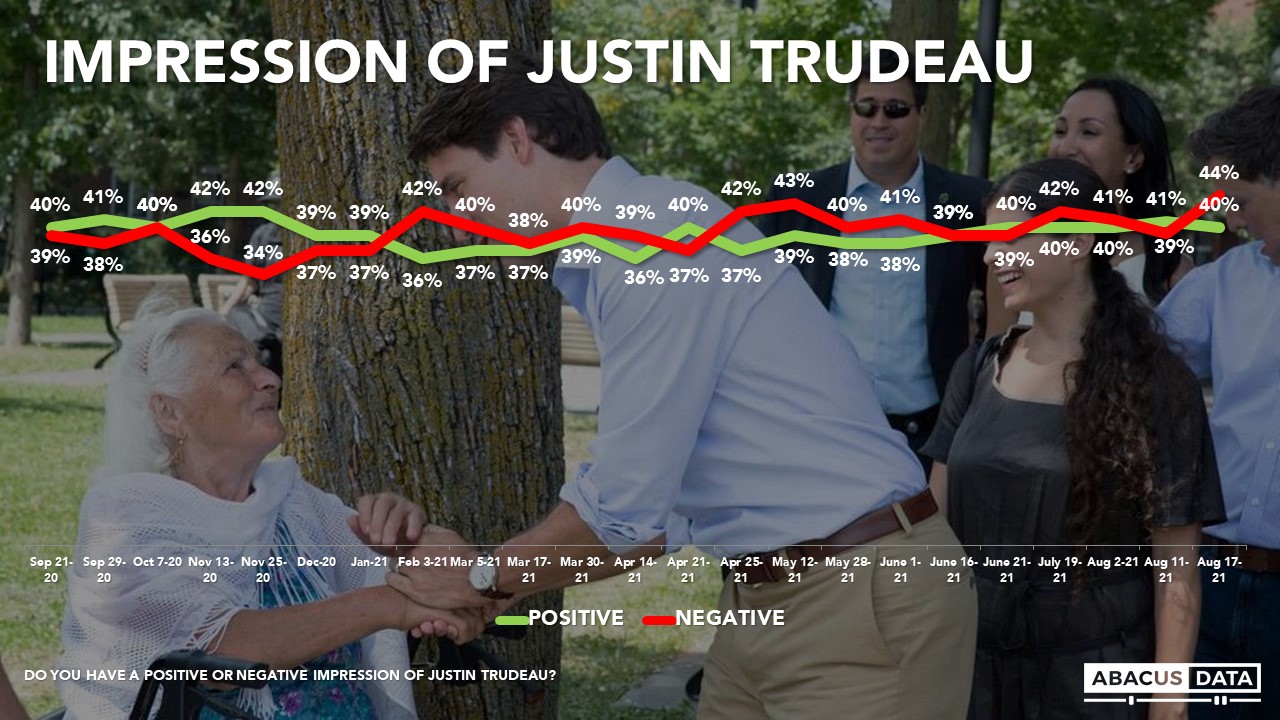 Jagmeet Singh enjoys a positive impression among 39% and finds negative impressions among 24% for a net +15. Impressions of Mr. Singh are largely unchanged from last week. 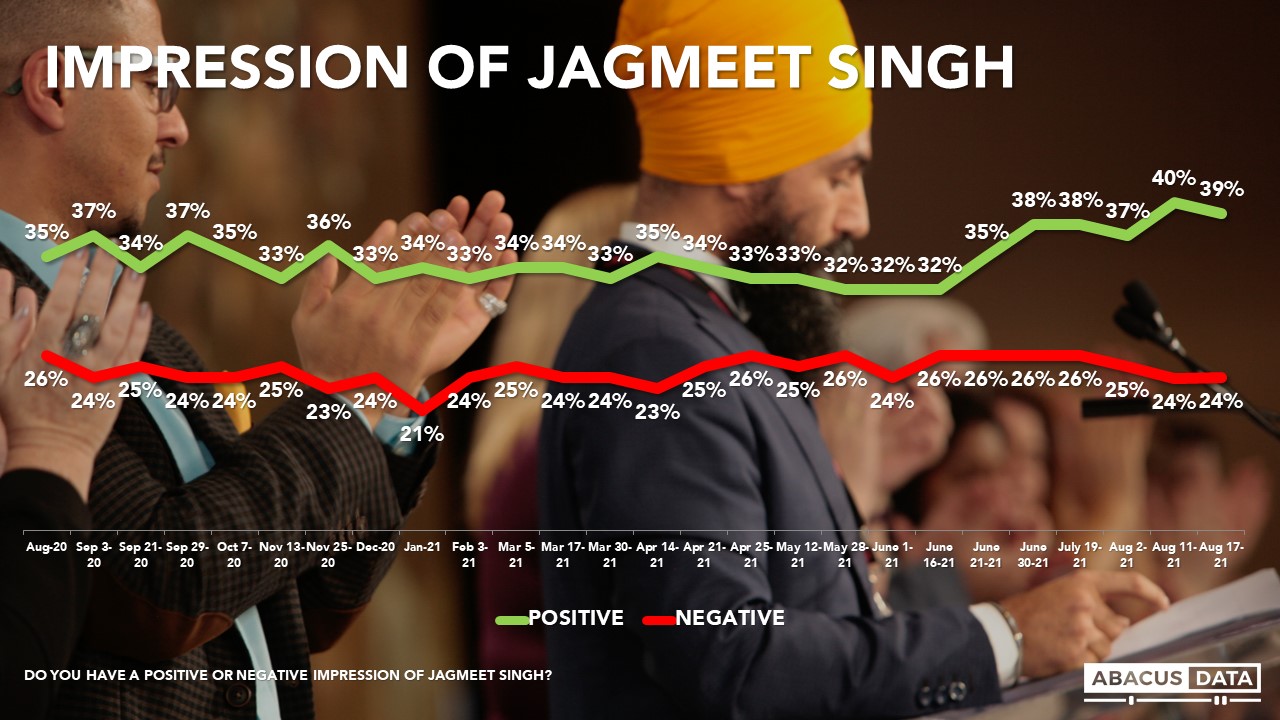 Erin O’Toole enjoys a positive impression among 20% and finds negative impressions among 41%, for a net score of -21. Impressions of Mr. O’Toole are also largely unchanged from last week. 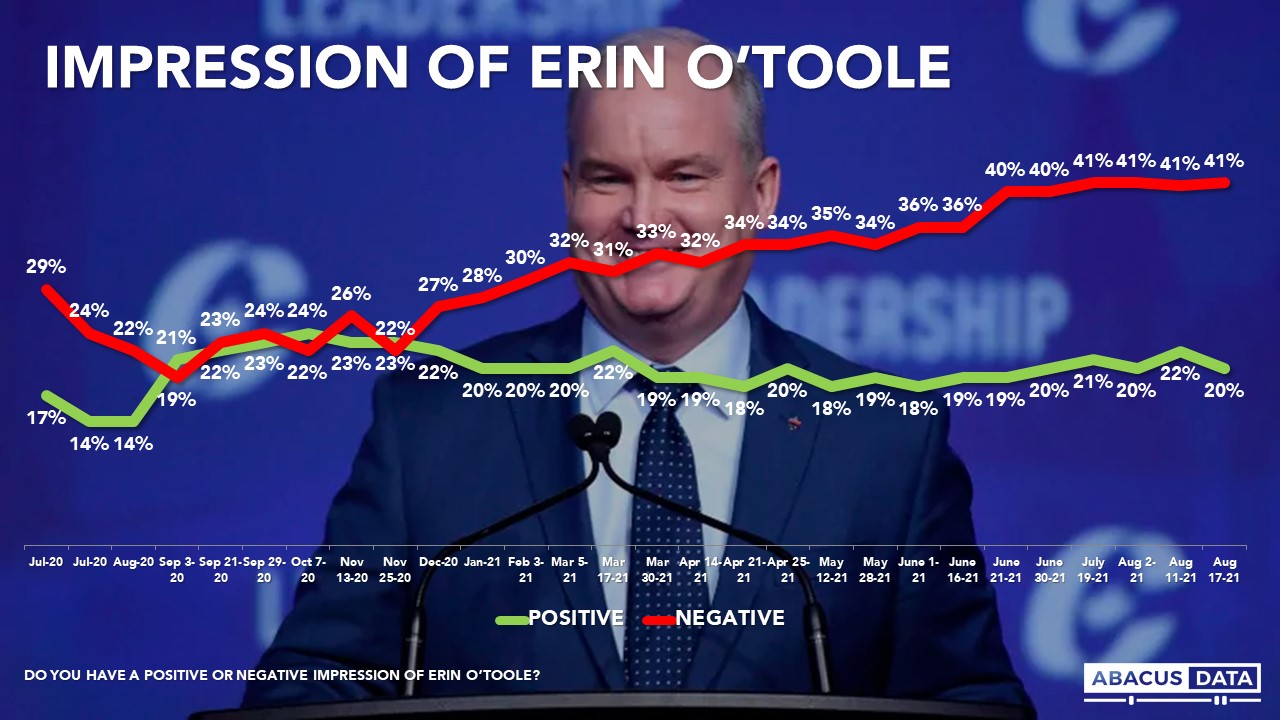 HOW DOES THIS TRANSLATE INTO VOTE INTENTION? 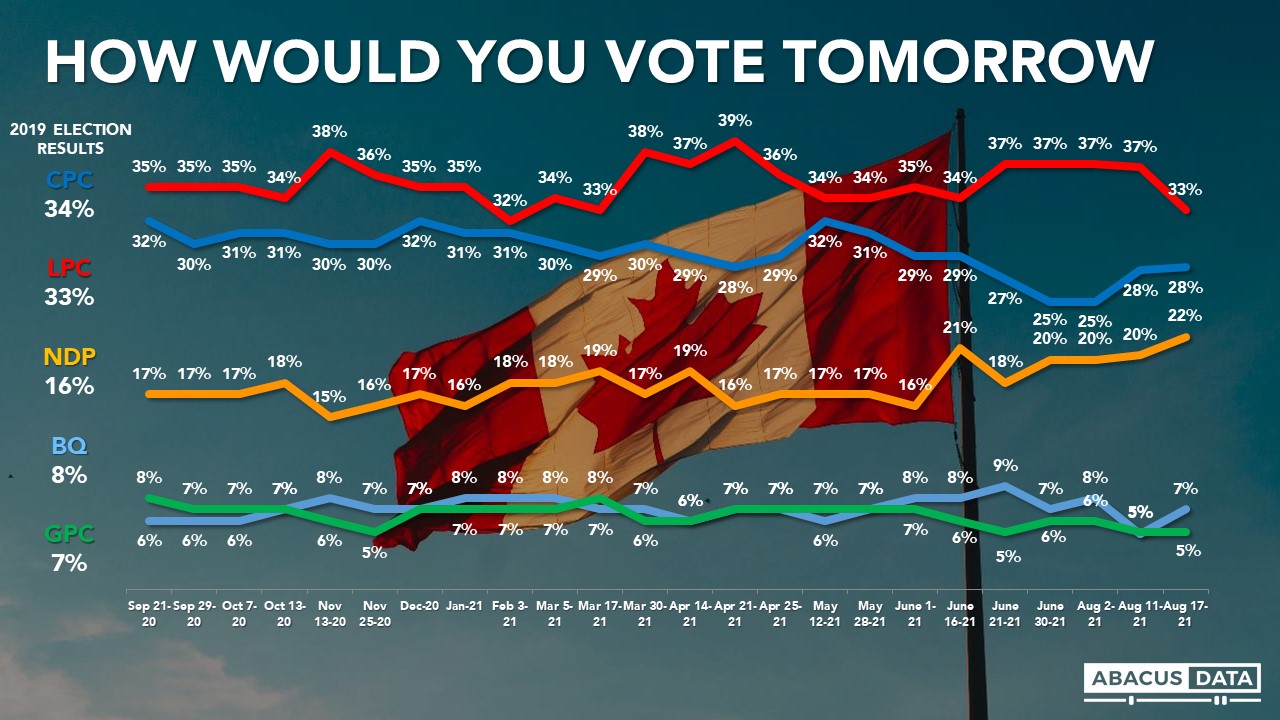 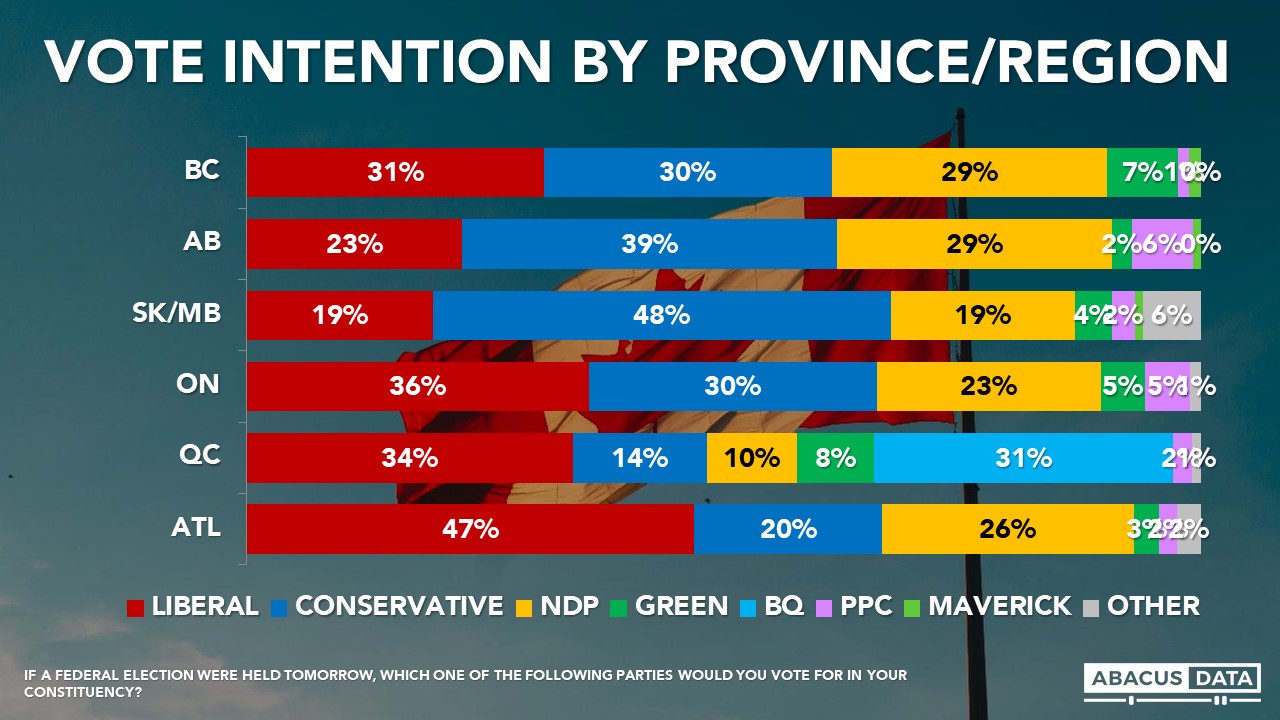 We are also testing levels of motivation, by asking people how likely they are to turn out and cast a ballot on election day. Among the 70% of respondents who said they would definitely be voting, the Liberals lead by a 3-point margin: 33% Liberal, 30% Conservative, 21% NDP, 8% BQ and 4% Green. 3% would vote for the People’s Party.

According to Bruce Anderson: “We’ll evaluate events on a continuous basis during this sprint to Election Day. At this point, I’m hesitant to conclude anything about a shift in mood, we’re in the middle of summer, engagement levels are uncertain, and parties and leaders have only begun to make their pitches. I’ll continue to watch for the same things – will Jagmeet Singh be able to turn interest in him into capturing Liberal votes in key battleground regions, will Erin O’Toole be able to overcome hesitancy about his party and himself personally and will Justin Trudeau make a persuasive and galvanizing case for the policy choices he’s advocating especially around vaccines and affordable child care.

According to David Coletto: “Within a few weeks, a 12-point Liberal lead has shrunk to a 5-point lead as the race in Ontario and BC has tightened. The NDP has gained a few points while the Conservatives remain stuck just below 30%.

Given that only a portion of this survey was done after the election call, it’s too early to say whether the opposition parties’ criticism of the early election call is having much impact, but there’s some indication that the rise of COVID-19 cases is increasing anxiety and the mood of the public seems to be shifting.

This shift may ultimately play to the Liberal Party’s advantage as previous research has found most think the government has handled the pandemic well and support for vaccine mandates is strong across the country. It might expose it to concerns about holding an election during the 4th wave of the pandemic.”

The survey was conducted with 1,500 Canadian adults from August 12 to 16, 2021. A random sample of panelists were invited to complete the survey from a set of partner panels based on the Lucid exchange platform. These partners are typically double opt-in survey panels, blended to manage out potential skews in the data from a single source.

The survey was commissioned and paid for by Abacus Data Inc. 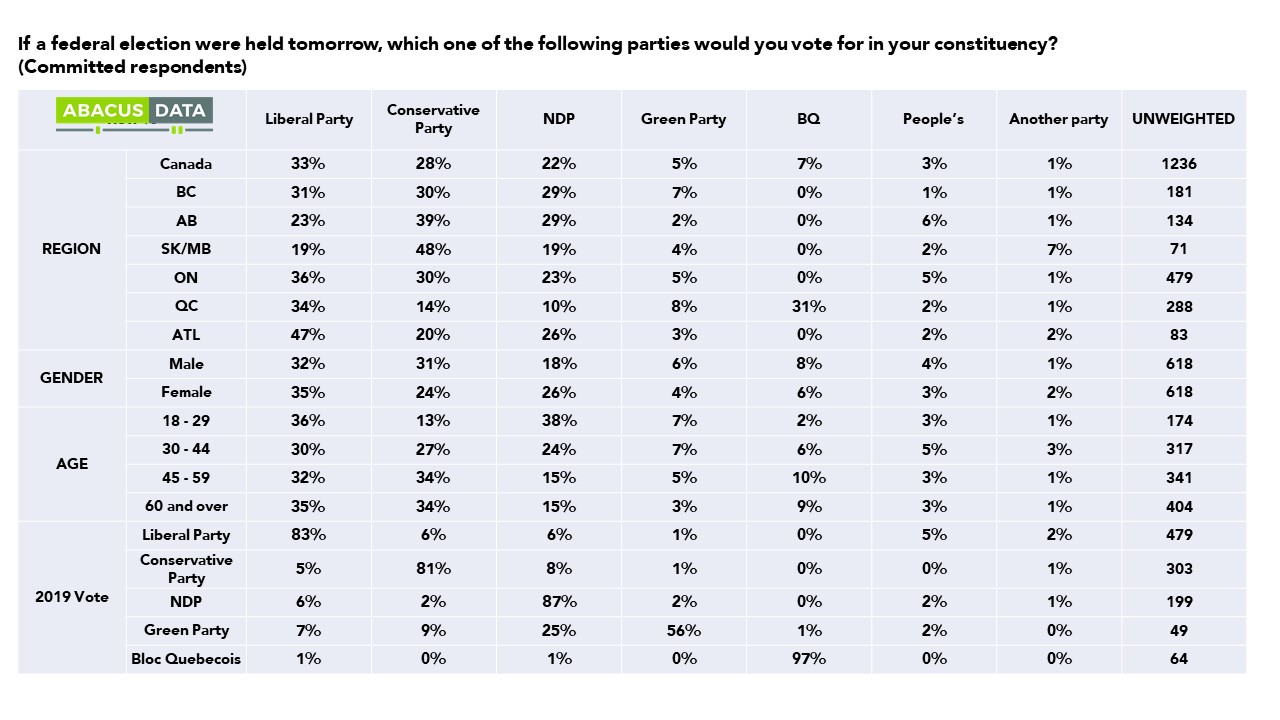 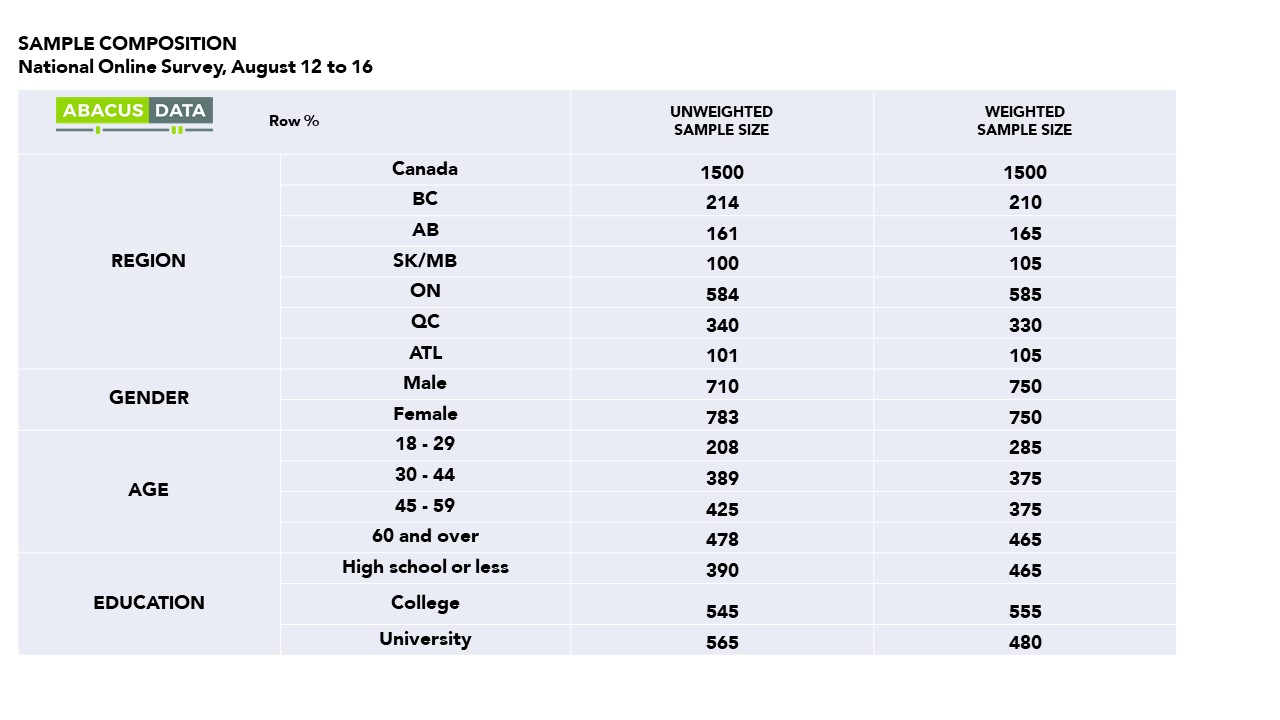