We just completed a national survey of 2,875 Canadians eligible to vote in the current federal election completed entirely after last Thursday’s TVA debate. Fieldwork was carried out from Friday to Monday. 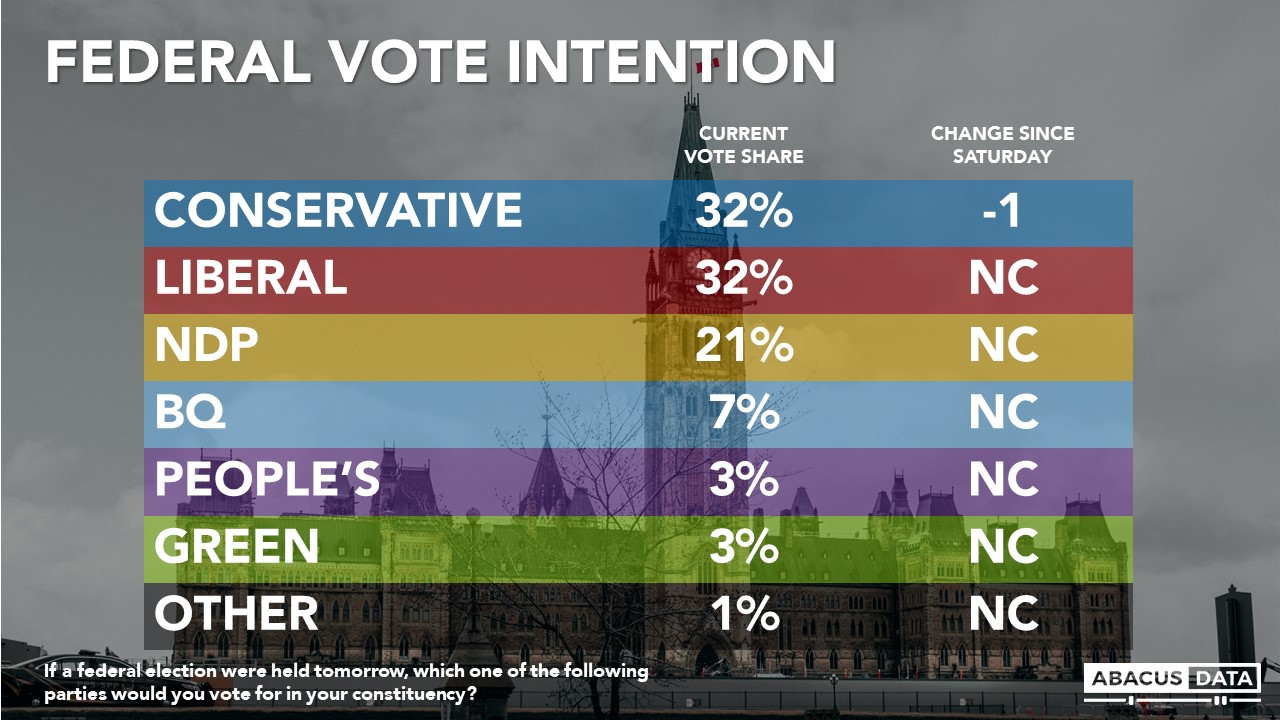 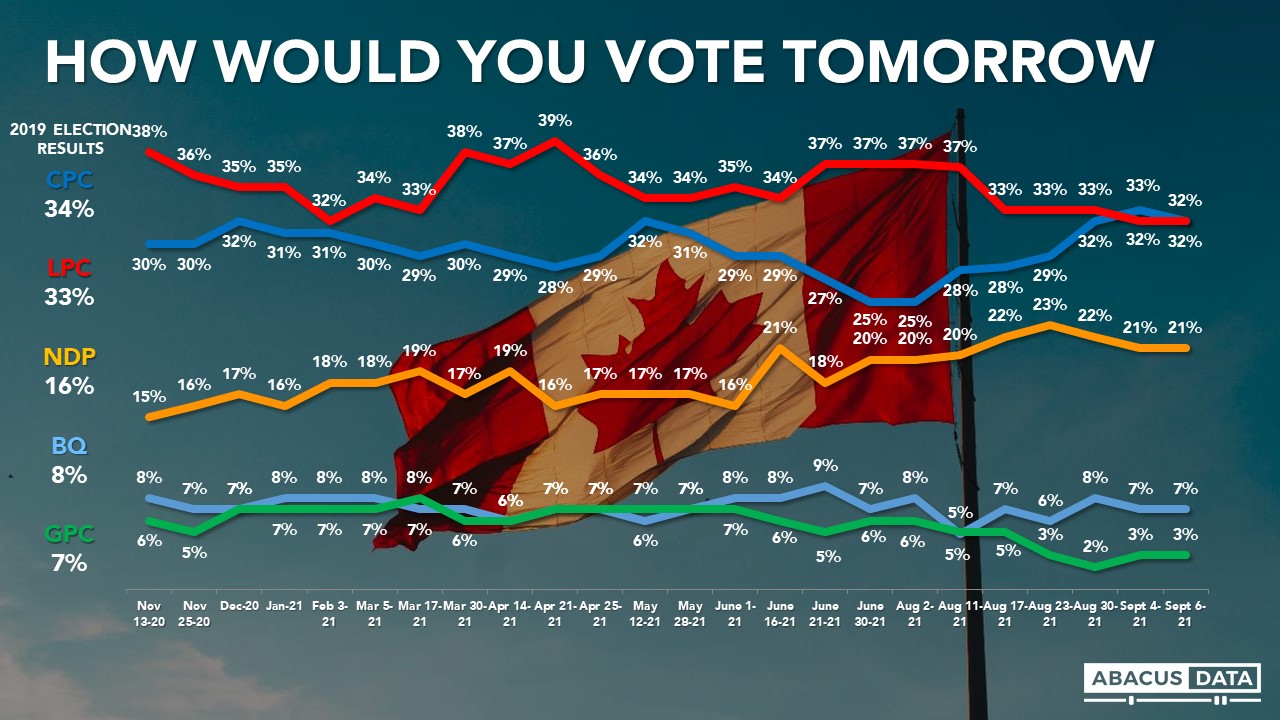 • In Manitoba and Saskatchewan, the Conservatives lead with 46% followed by the NDP at 24% and the Liberals at 24%.

• In Quebec, we see the LPC and BQ are neck and neck (32% to 31%) with the Conservatives at 21% and the NDP at 13%. Since our last full sample done before the debate in Quebec at the end of August, the Liberals are up 3 while the BQ is down 3 but this change is all within the margin of error. 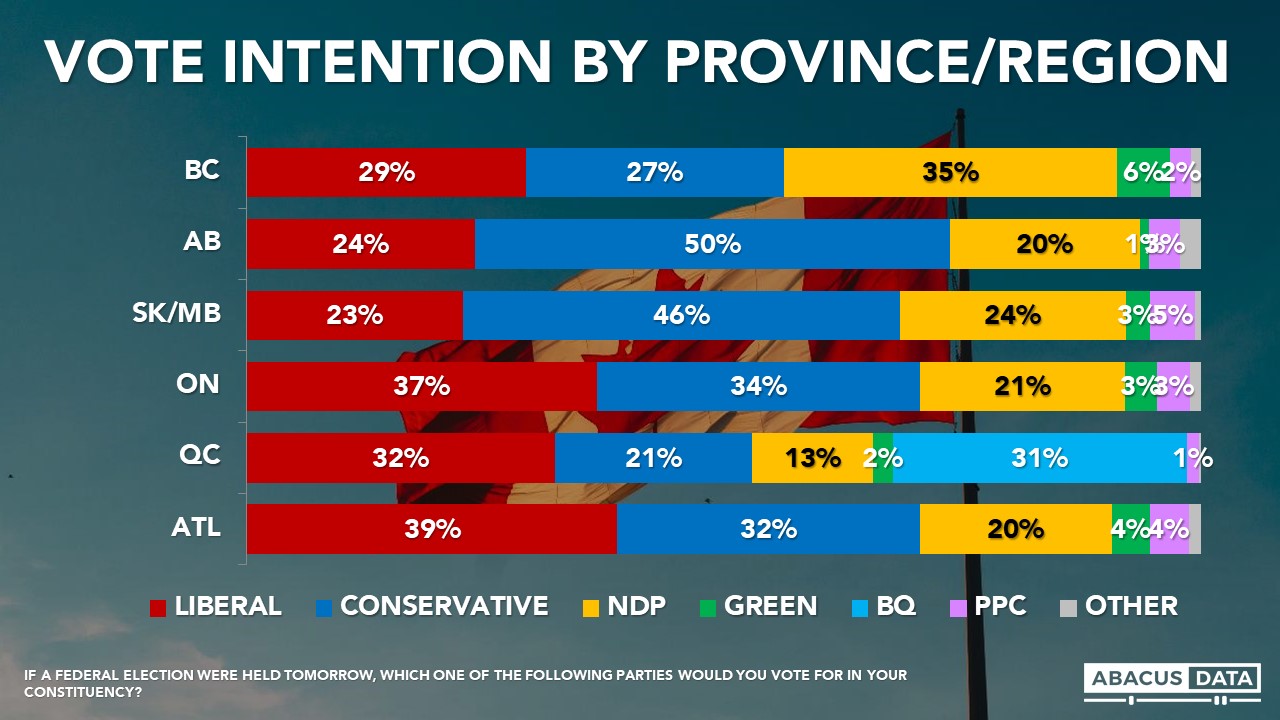 The Conservatives continue to have a marginal 2-point lead among those who are most likely to vote. Among the 69% of respondents who said they would definitely be voting, the Conservatives have 34% compared with 32% for the Liberals and 21% for the NDP. This is largely unchanged from our last poll. 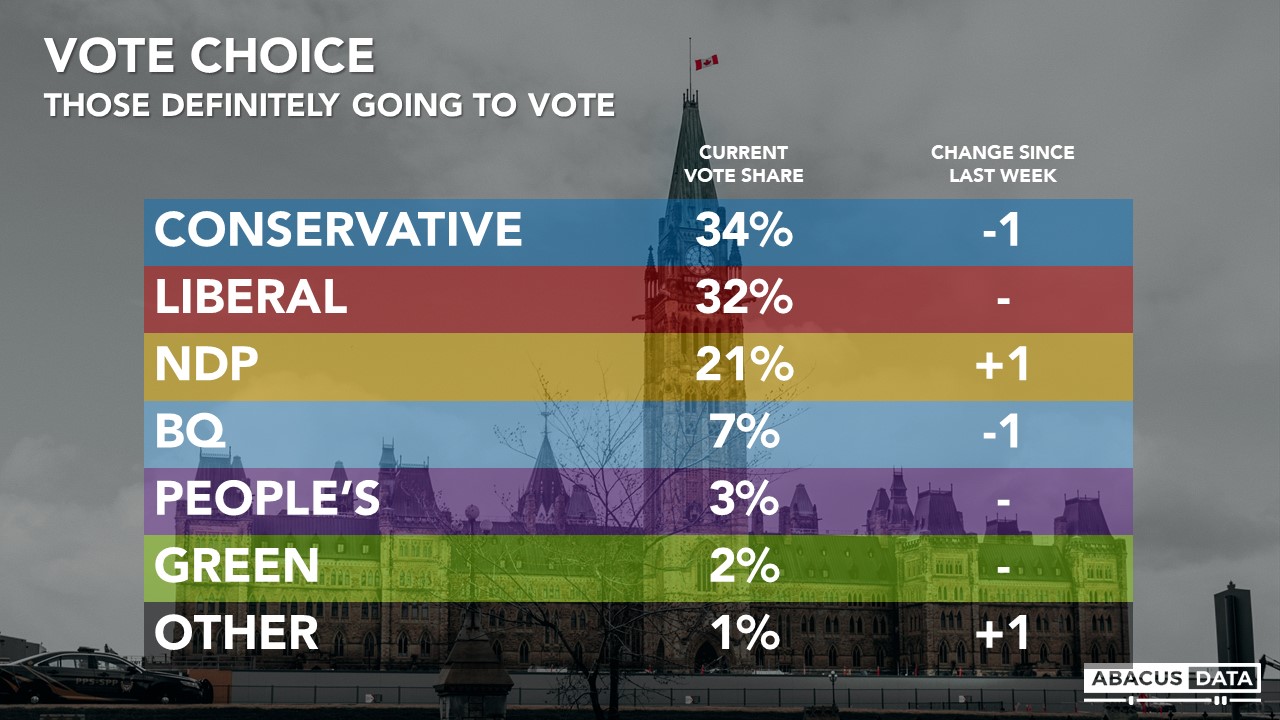 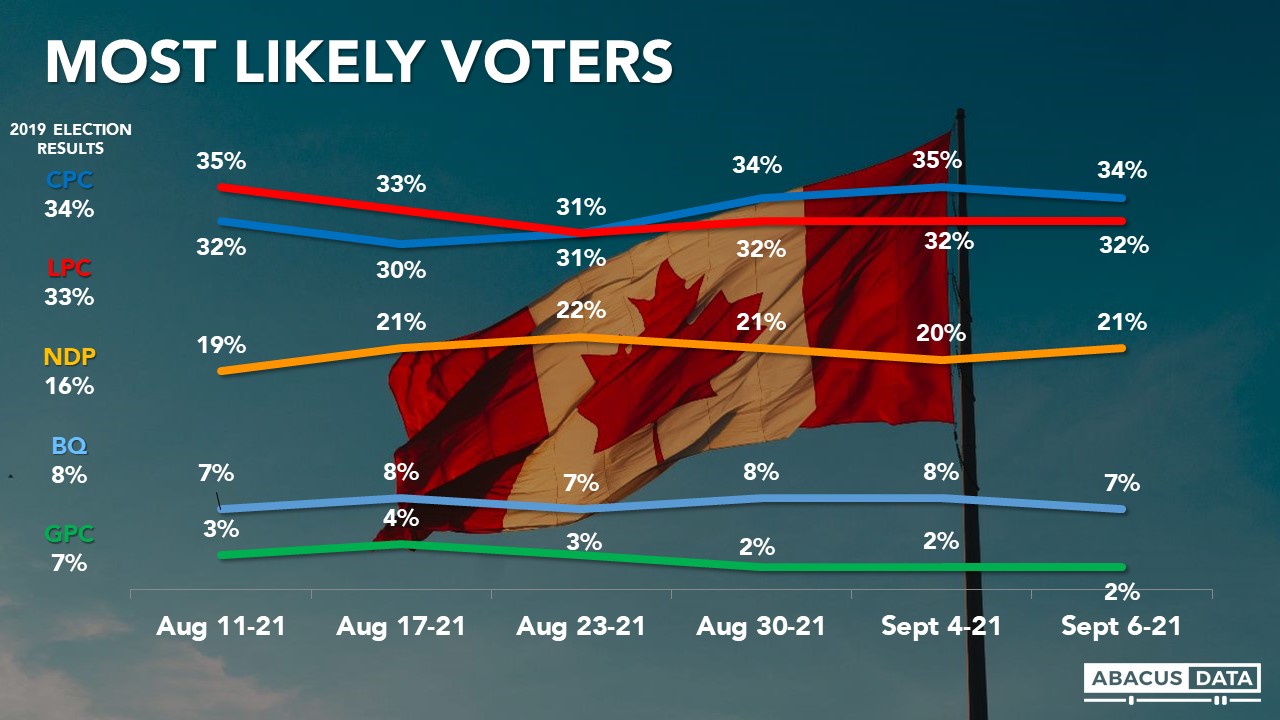 In Quebec, 48% of respondents said they watched all (20%) or some (28%) of the leaders’ debate on TVA Thursday night. Another 27% said they heard about it from others while 25% did not hear anything about the debate.

Outside Quebec, 6% said they watched all of the debate, 15% watched some of it, while 33% heard something about it from others or the news. 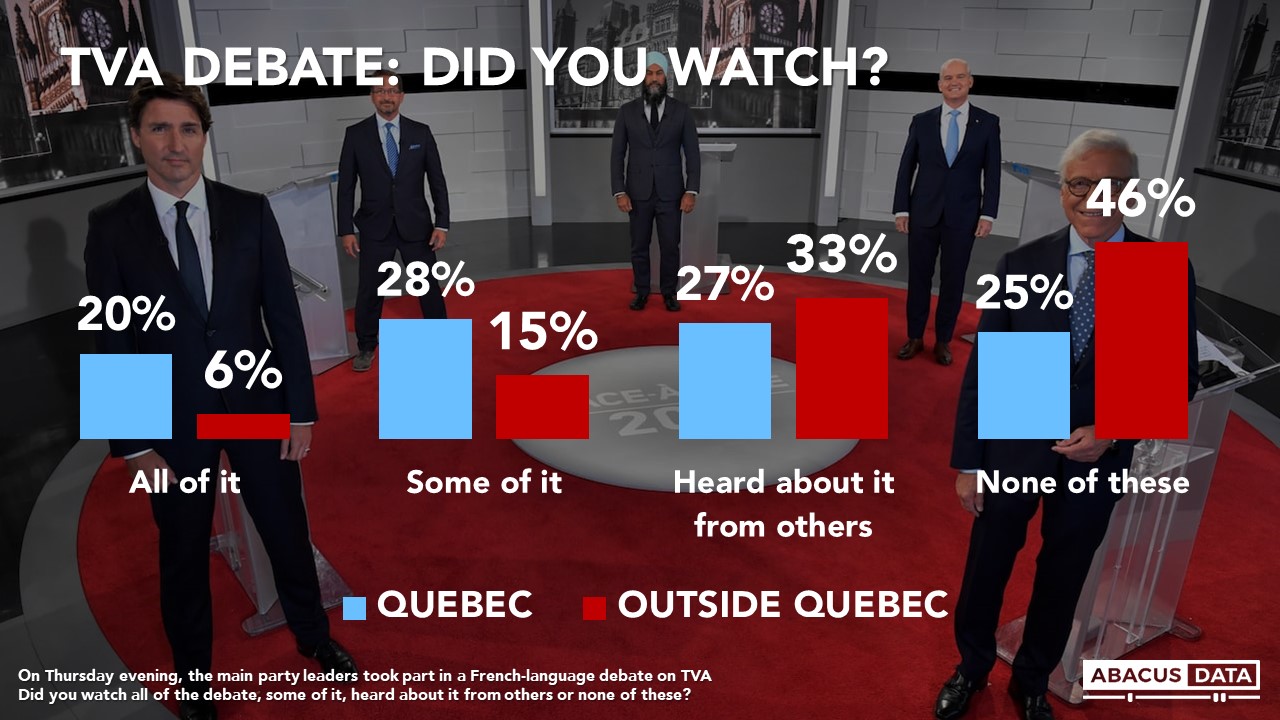 It appears the audience for this debate was slightly larger than in 2019. In a survey we did post-debate in 2019, 14% said they watched all of it, 27% watched some, while 37% heard something about it from others.

Those who watched or heard something about the debate were asked whether each leader made a positive or negative impression. 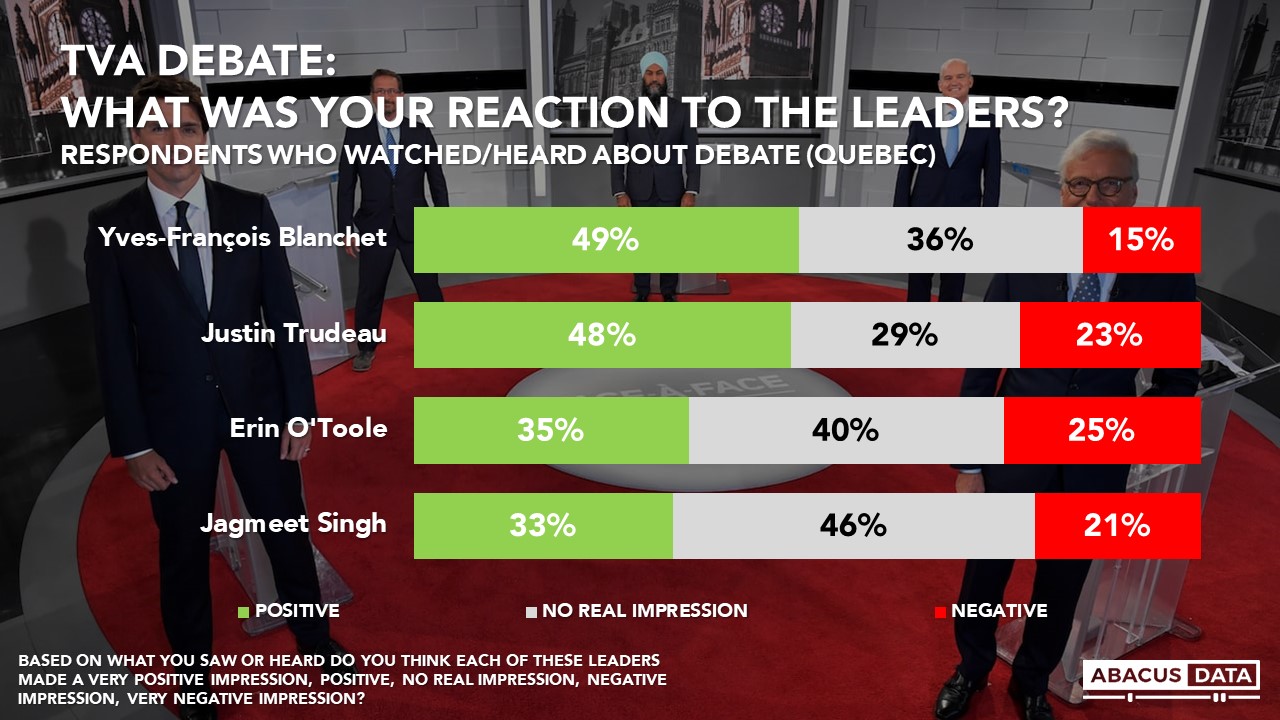 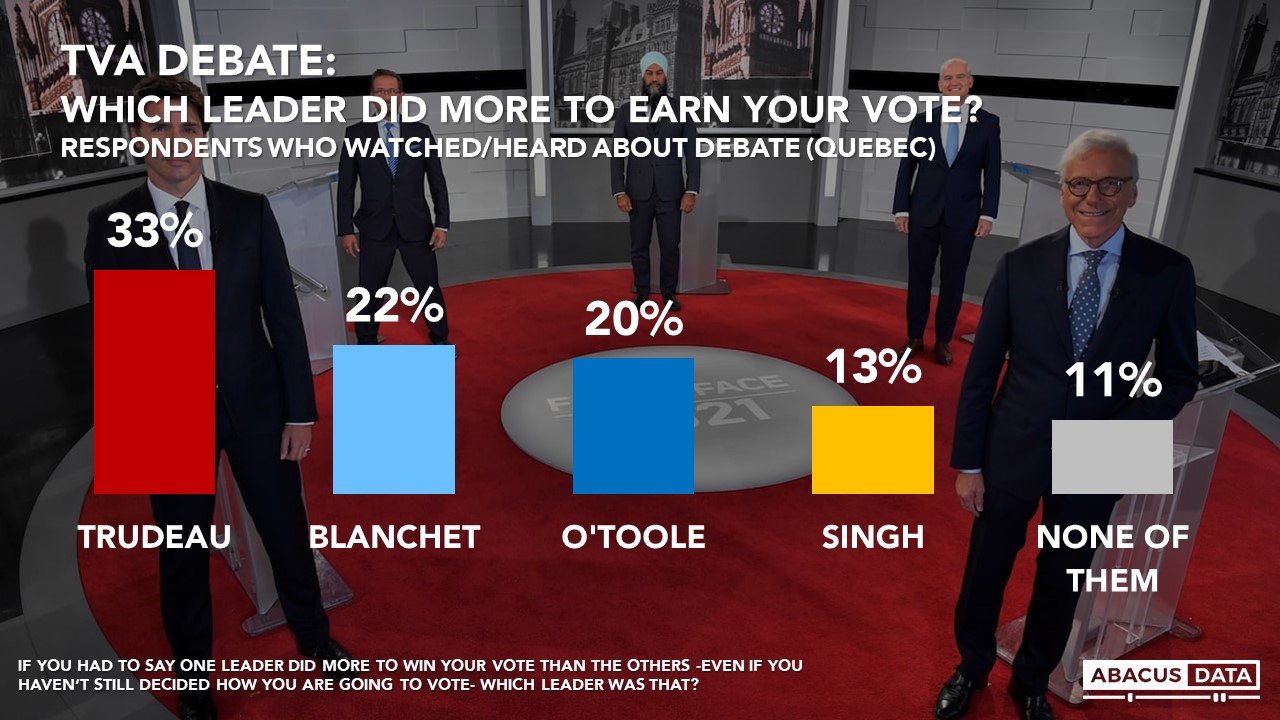 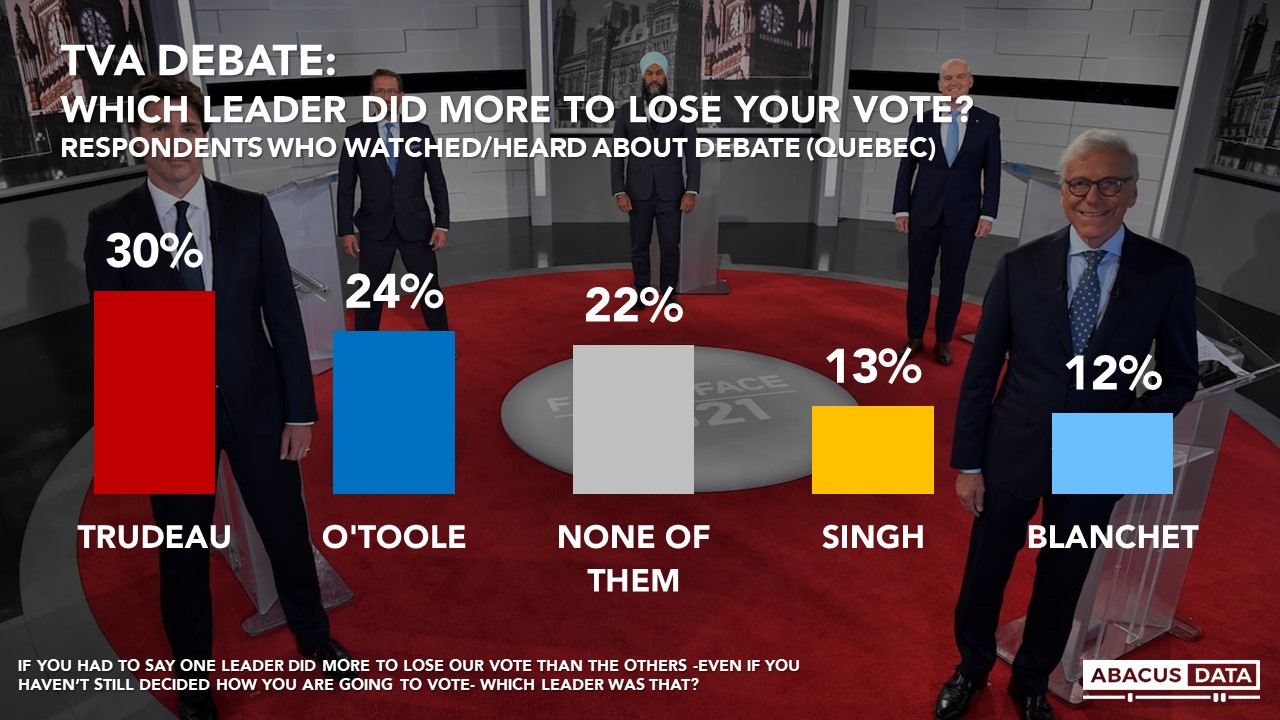 Overall, these results suggest that Mr. Trudeau and Mr. Blanchet had better nights than the other two leaders but that no leader performed poorly.

Asked which of four (most likely based on today’s numbers) outcomes they would prefer, 58% would prefer a Liberal victory (30% majority, 28% minority) while 42% would prefer a Conservative win (15% minority, 27% majority). This is unchanged from our previous survey.

Among BQ voters 51% would prefer the Liberals win, compared to 49% who would like the Conservatives to come out on top.

Among Liberal/Conservative switchers 72% would prefer to see the Liberals win. 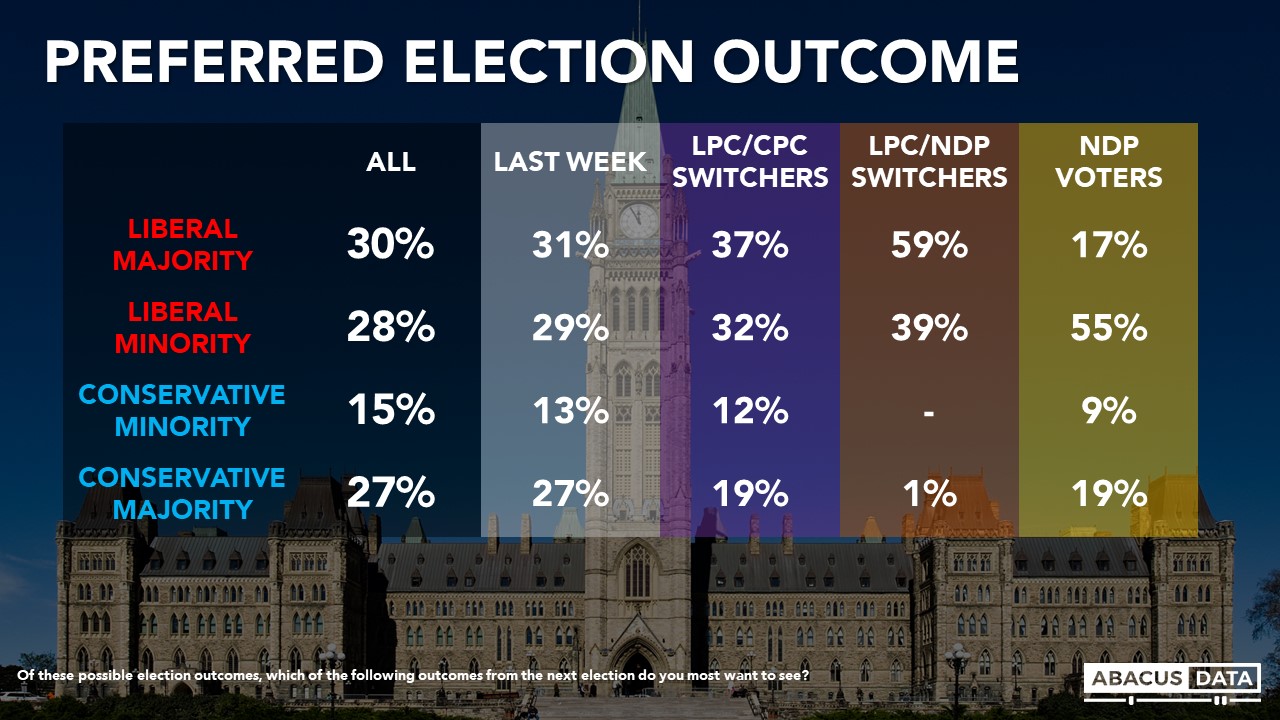 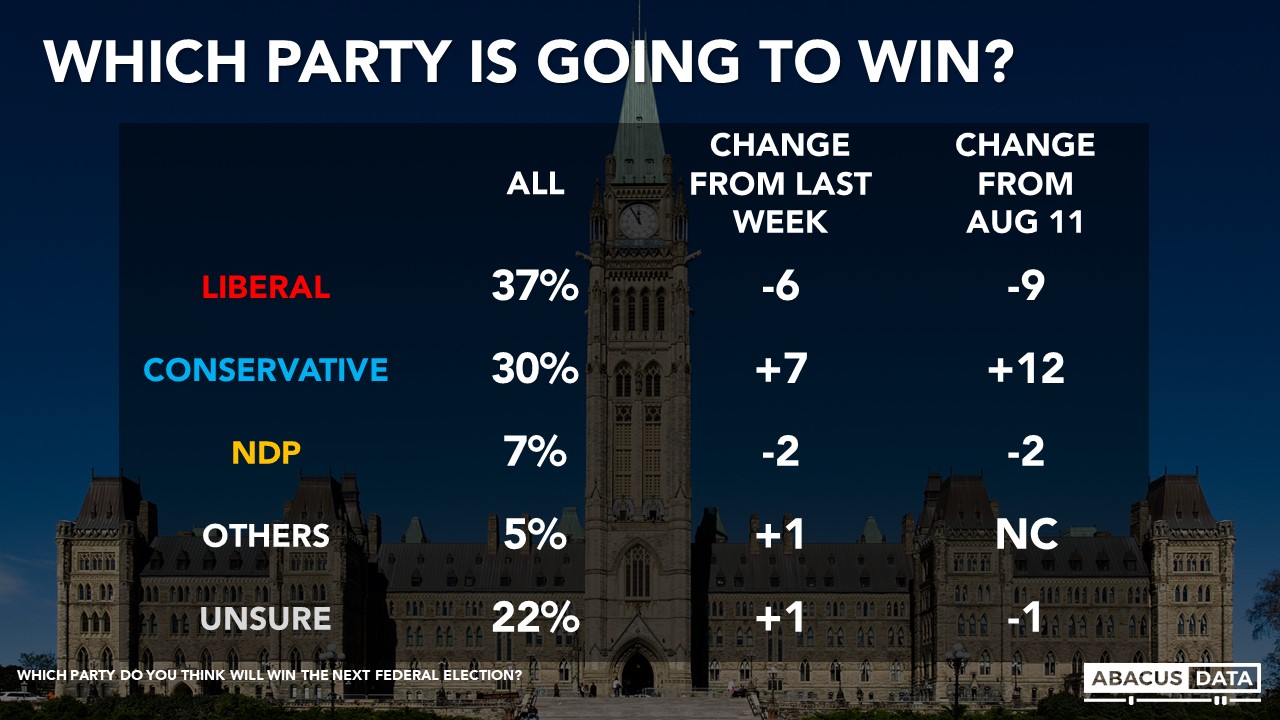 Those who would prefer the LPC to win but think the Conservatives are going to win makes up 5% of the electorate – continuing to rise over the past week.

Justin Trudeau enjoys a positive impression among 38% and negative impressions among 43%, for a net score of -5. This is unchanged from last week. Regionally, Mr. Trudeau’s net favourables are -4 in BC, -24 in Alberta, -27 in SK/MB, 0 in Ontario, -2 in Quebec, and +6 in Atlantic Canada. Among Liberal/NDP switchers Trudeau is +71. Among Liberal/Conservative switchers he is +46. 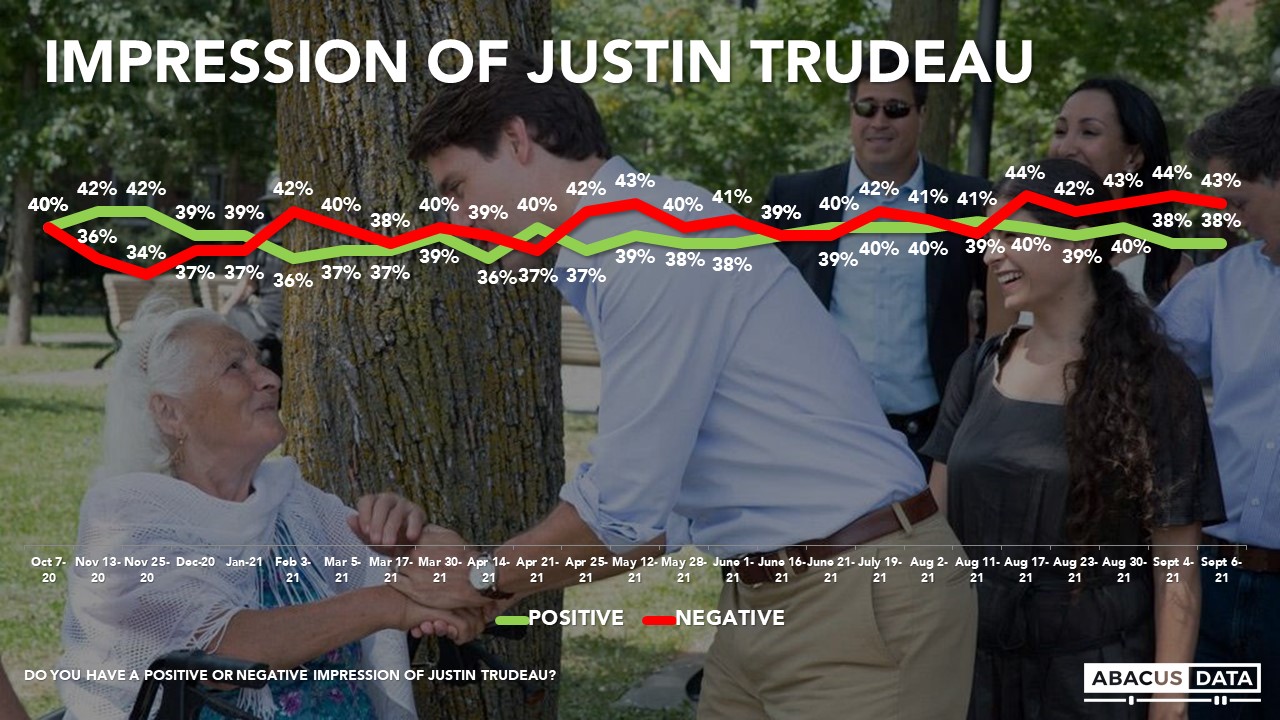 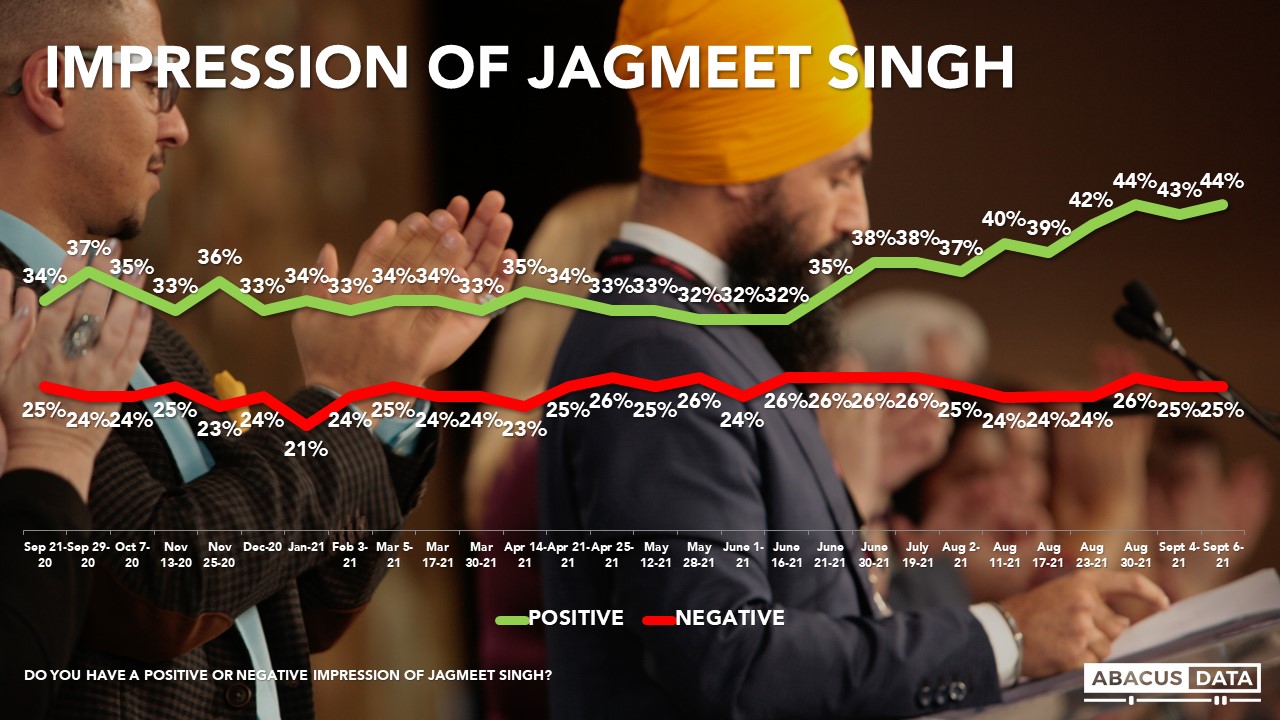 Today 31% have a positive impression of the Conservative leader Erin O’Toole (+1 from last wave) while his negatives are at 39% (-1) for a net score of -8. 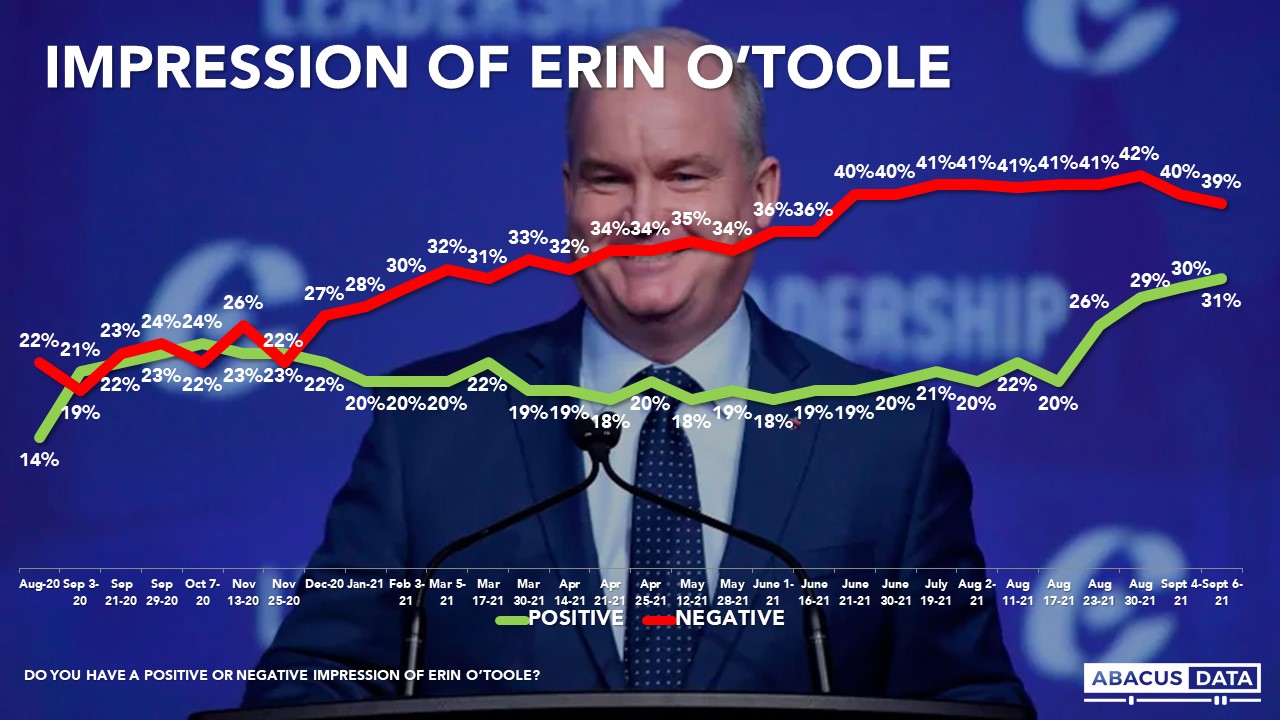 In Quebec, BQ Leader Mr. Blanchet is 40% positive and 30% negative for a net score of +10. Mr. Blanchet’s negatives are up 5 since the end of August. 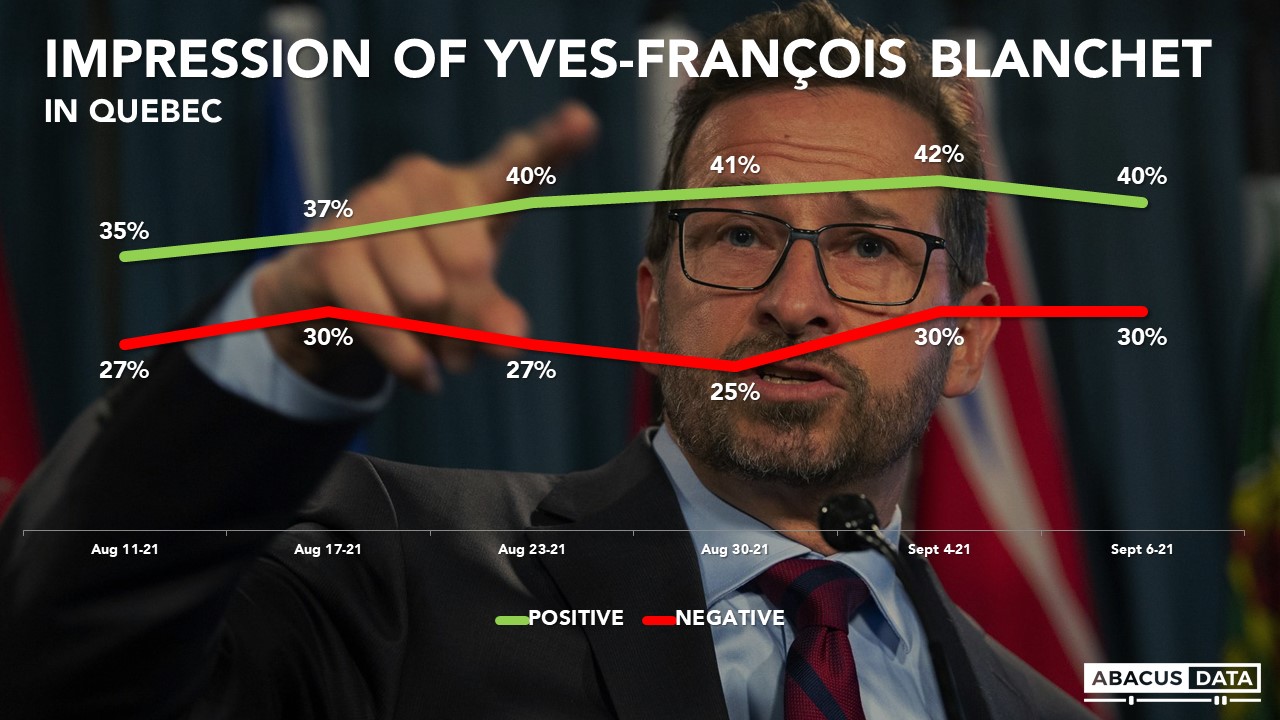 Since the campaign started, the Conservative pool has grown by 5, the BQ by 4 while the Greens have seen their accessible voter pool drop by 4 points. The Liberal and NDP voter pools are largely unchanged. 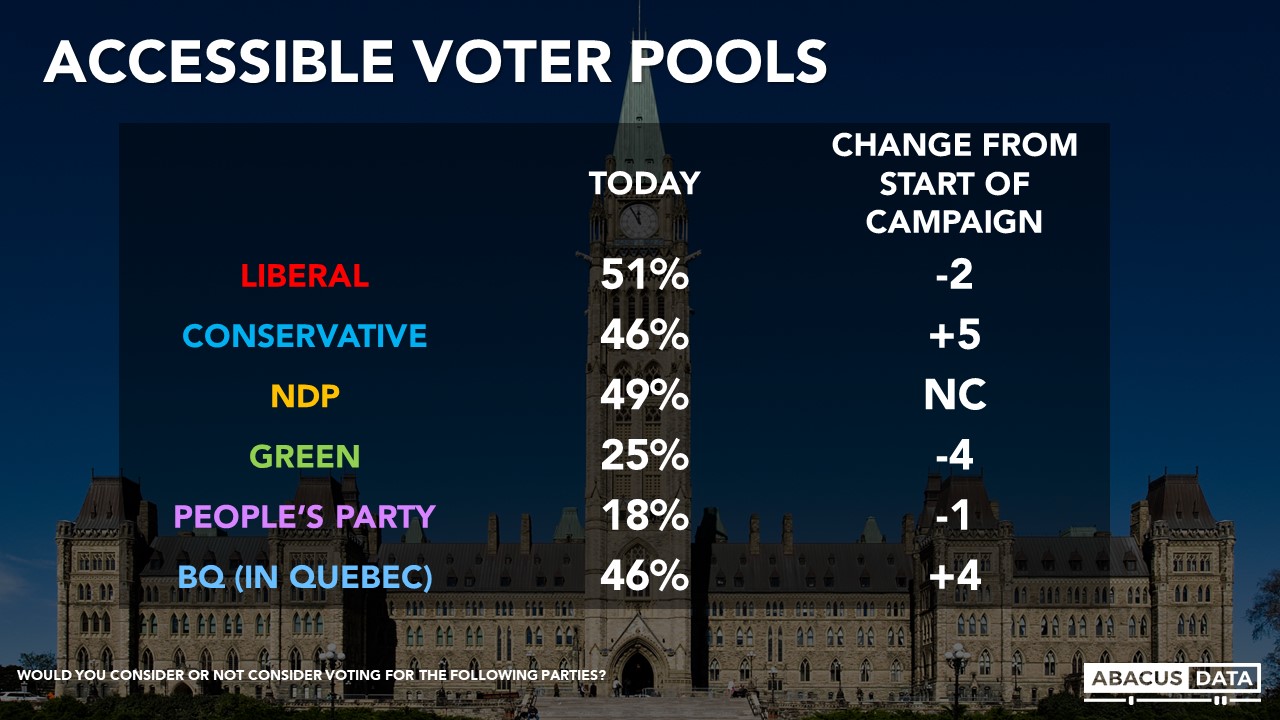 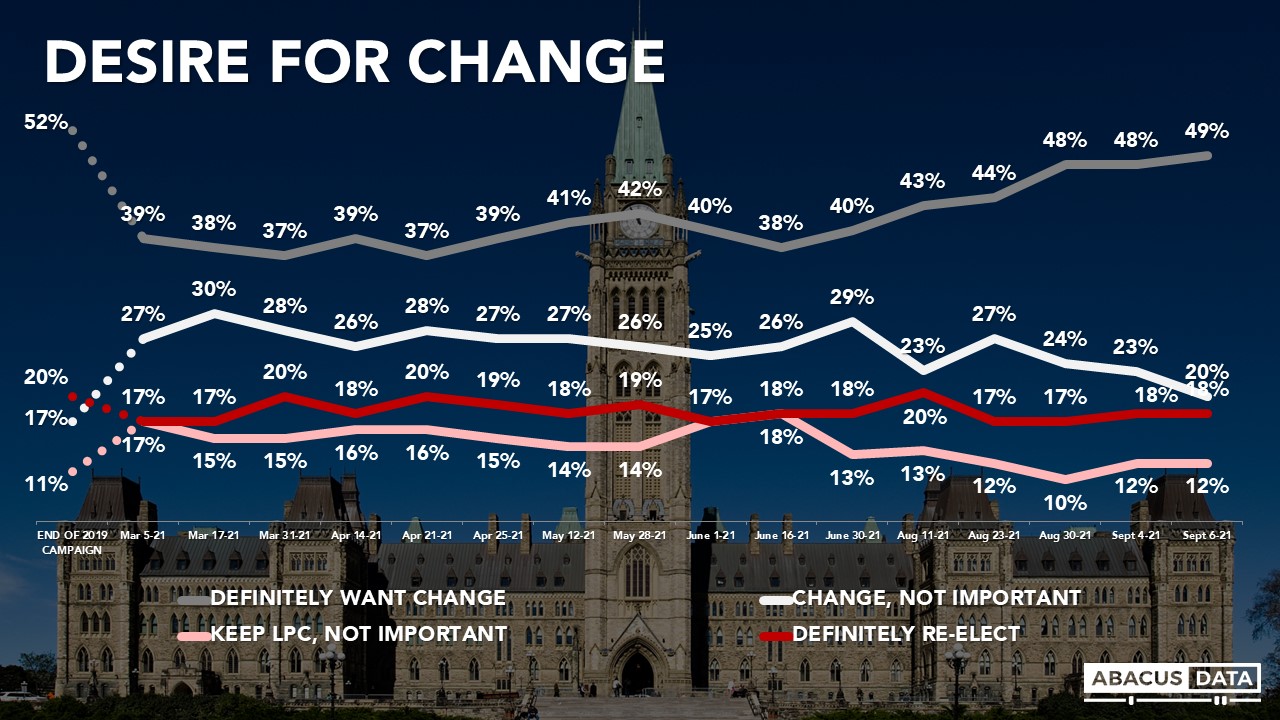 The vote preference by change group is important to understanding the election. Among those who prefer change but say it isn’t that important to them (20% of the electorate at the moment), the Liberals and NDP are statistically tied (LPC 34% vs. NDP 30%) with the Conservatives in third. Liberal re-election hopes likely ride on how this group ultimately leans.

Among those who say they want to keep the Liberals in office but it’s not important to them, 68% would vote Liberal compared with 16% who would vote NDP. 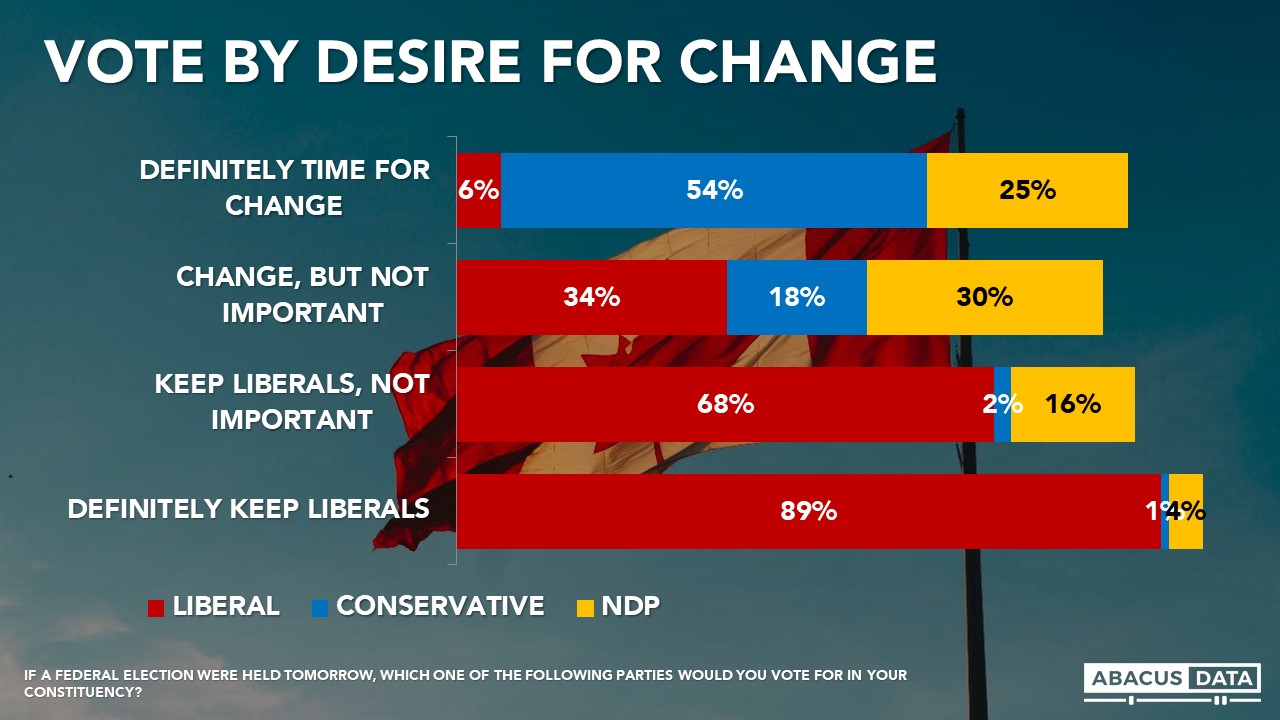 Today, 37% of voters would prefer Justin Trudeau be PM after the election, 32% would prefer Erin O’Toole, and 24% Jagmeet Singh. This is almost the exact same split as our last poll. 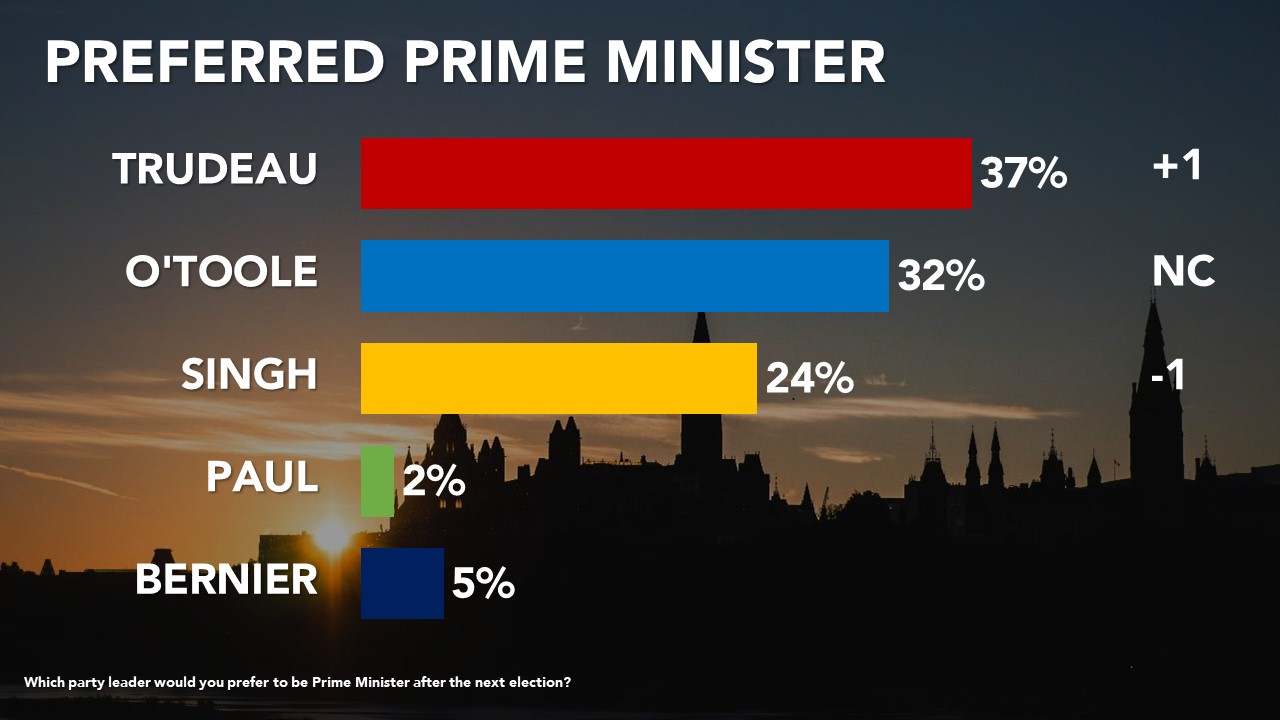 According to Bruce Anderson: “Anyone who felt that this election had a locked-in trajectory will want to revisit that point of view as more data is suggesting this race can be won by either one of two parties and that many voters remain uncertain what they will do. The TVA debate was a good outing for Mr. Trudeau but also for his chief rival in Quebec, Mr. Blanchet. Battles in BC, Ontario and Quebec are too close to call and the coming week, with more debates and more advertising, will be of vital importance for all the campaigns.”

According to David Coletto: “The race remains deadlocked nationally with the Liberals ahead in Ontario and tied in Quebec. Even among those most likely to vote, the 2-point Conservative margin is unlikely to win them more seats than the Liberals.

The TVA debate doesn’t appear to have changed the trajectory of the campaign with more saying Mr. Trudeau and Mr. Blanchet left a positive impression and vote intentions and leader impressions largely the same as before the debate.

But the static horse-race numbers obscure some important shifts and underlying perceptions/views that give us a sense of where this campaign could go in the final two weeks:

2. More voters continue to prefer a Liberal government to a Conservative one and this preference is not shifting much over time.

4. So far, the NDP has done the best at growing supporting. Of its current supporters, 49% said they voted NDP in 2019 meaning half of its support is new – with the bulk coming from potentially new voters (24%) who say they didn’t vote in 2019 either cause they weren’t eligible or they chose not to.

5. The desire for change remains at about the level it was when the 2019 campaign ended (49% today vs. 52% in 2019). Keeping this number below 52% is critical for the Liberals. Getting it higher is a must for both the Conservatives and the NDP.

The survey was conducted with 2,875 Canadian adults eligible to vote from September 3 to 6, 2021. A random sample of panelists were invited to complete the survey from a set of partner panels based on the Lucid exchange platform. These partners are typically double opt-in survey panels, blended to manage out potential skews in the data from a single source.

The margin of error for a comparable probability-based random sample of the same size is +/-1.9%, 19 times out of 20. 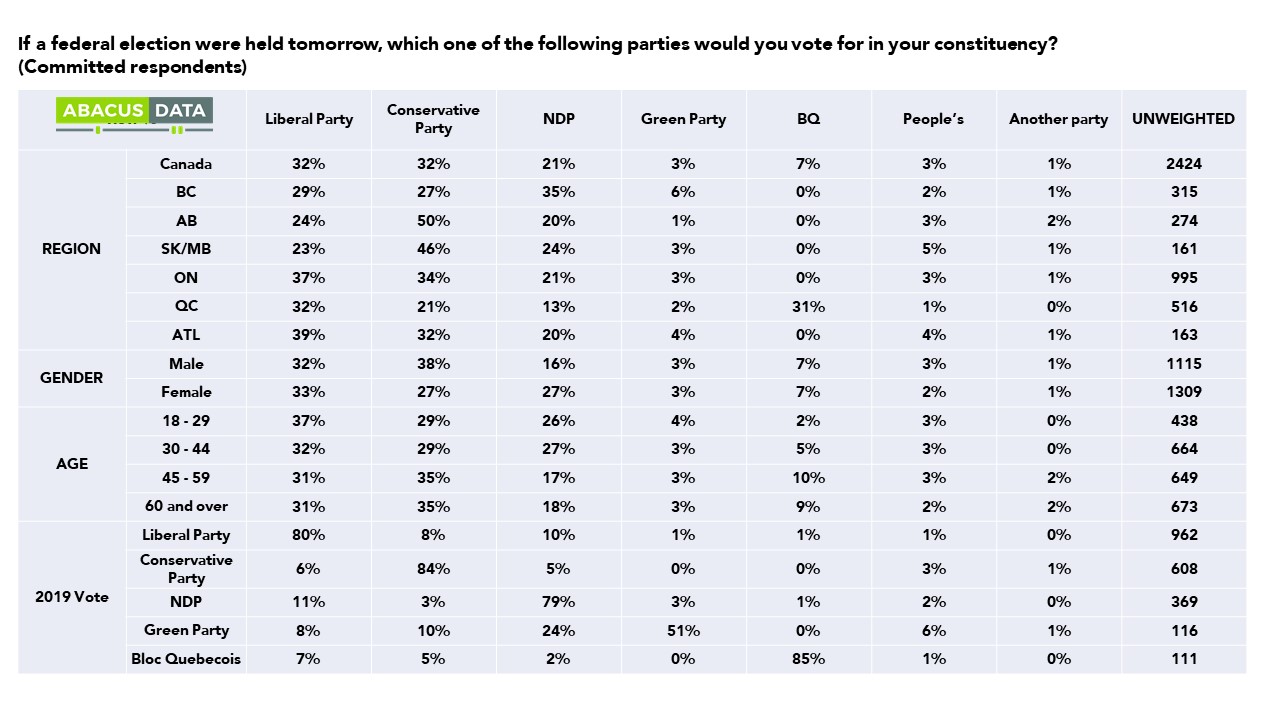 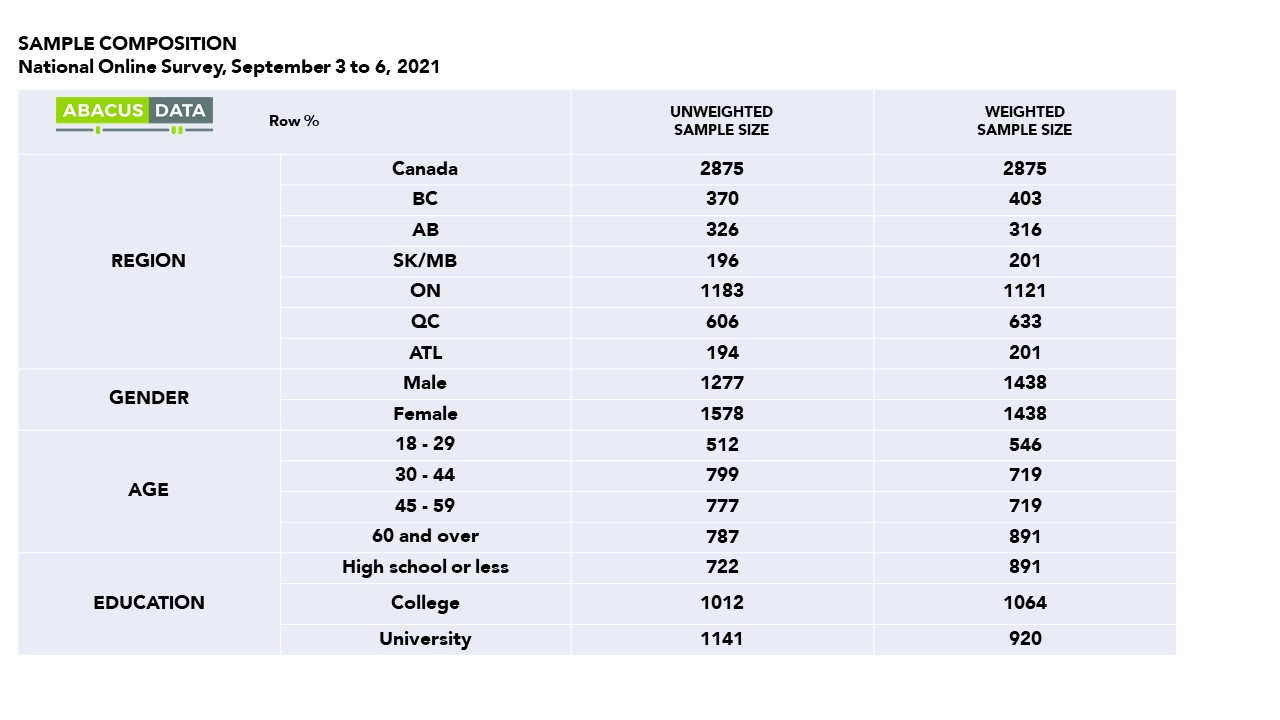