We just completed a national survey of 2,000 Canadians eligible to vote in the current federal election completed entirely after the French and English leaders’ debates last week. 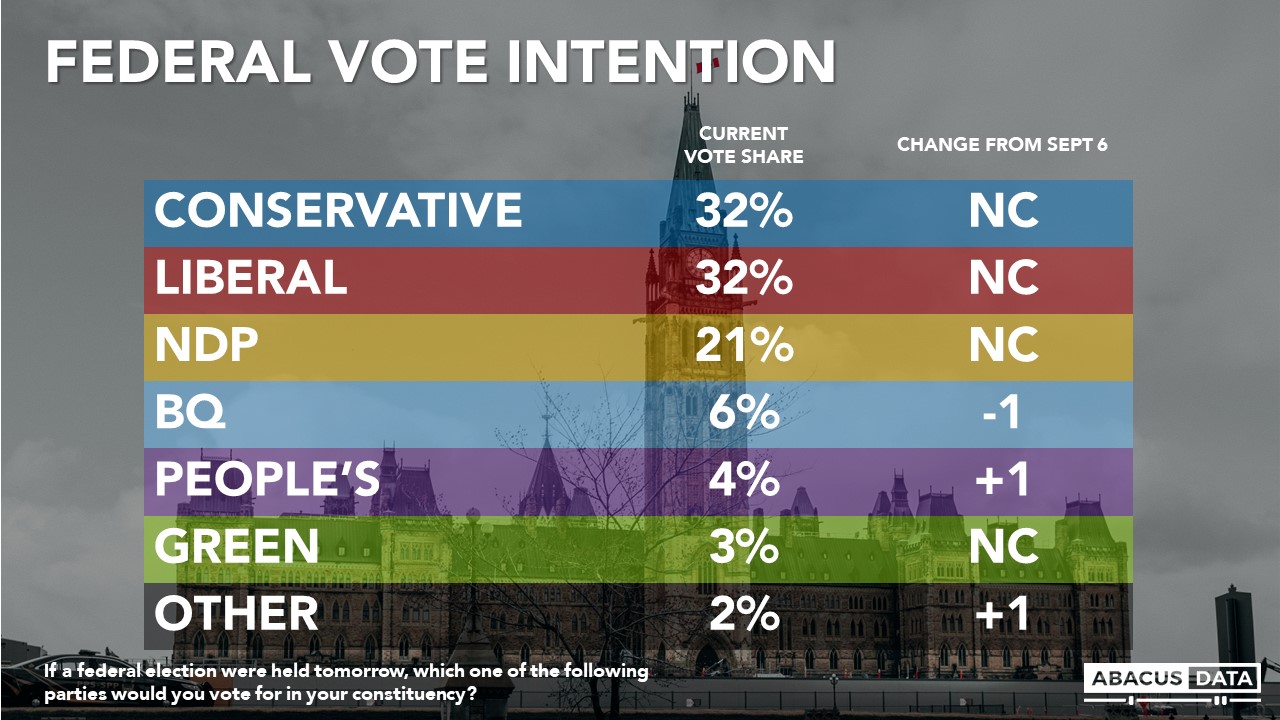 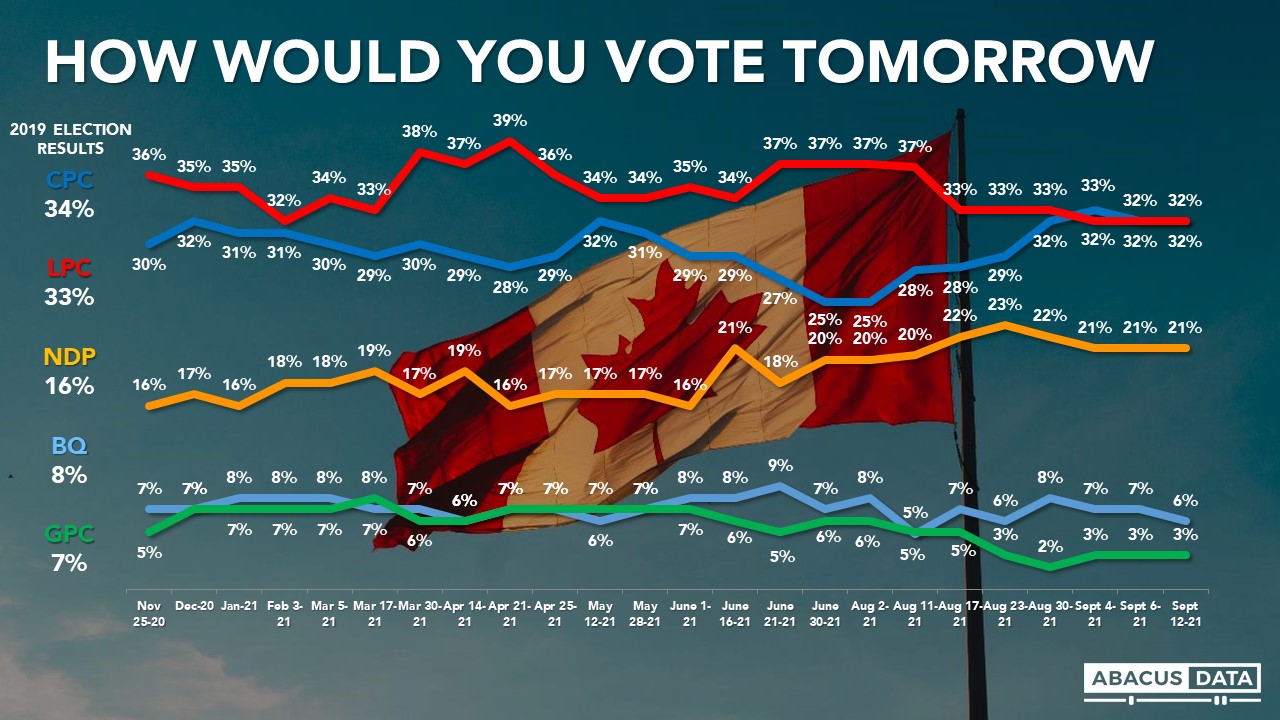 • In Manitoba and Saskatchewan, the Conservatives lead with 43% followed by the NDP at 24% and the Liberals at 18%.

• In Quebec, we see the Liberals ahead of the BQ by 7-points with the Conservatives at 17% and the NDP at 13%. This is a rise for the Liberals of 4-points and a drop for the BQ of 2-points. 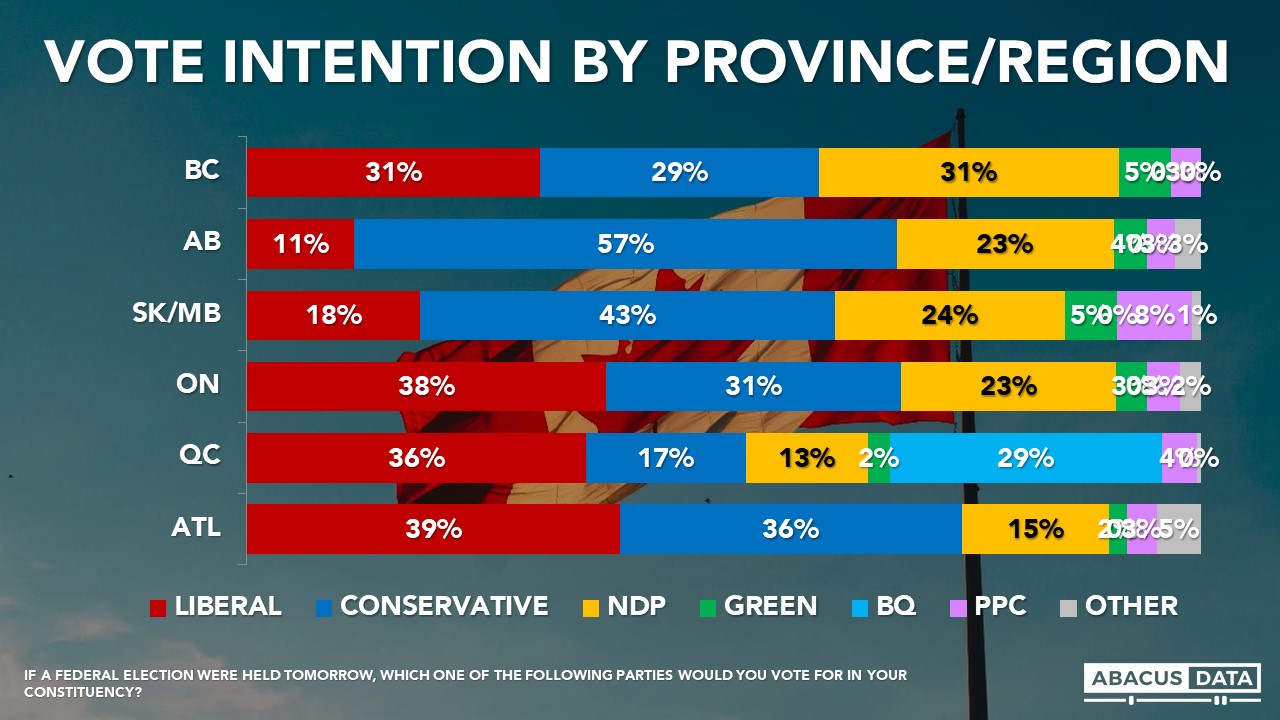 The Conservatives lead among those who say they will definitely vote by 4-points (35% to 31%) This is largely unchanged from our last poll. 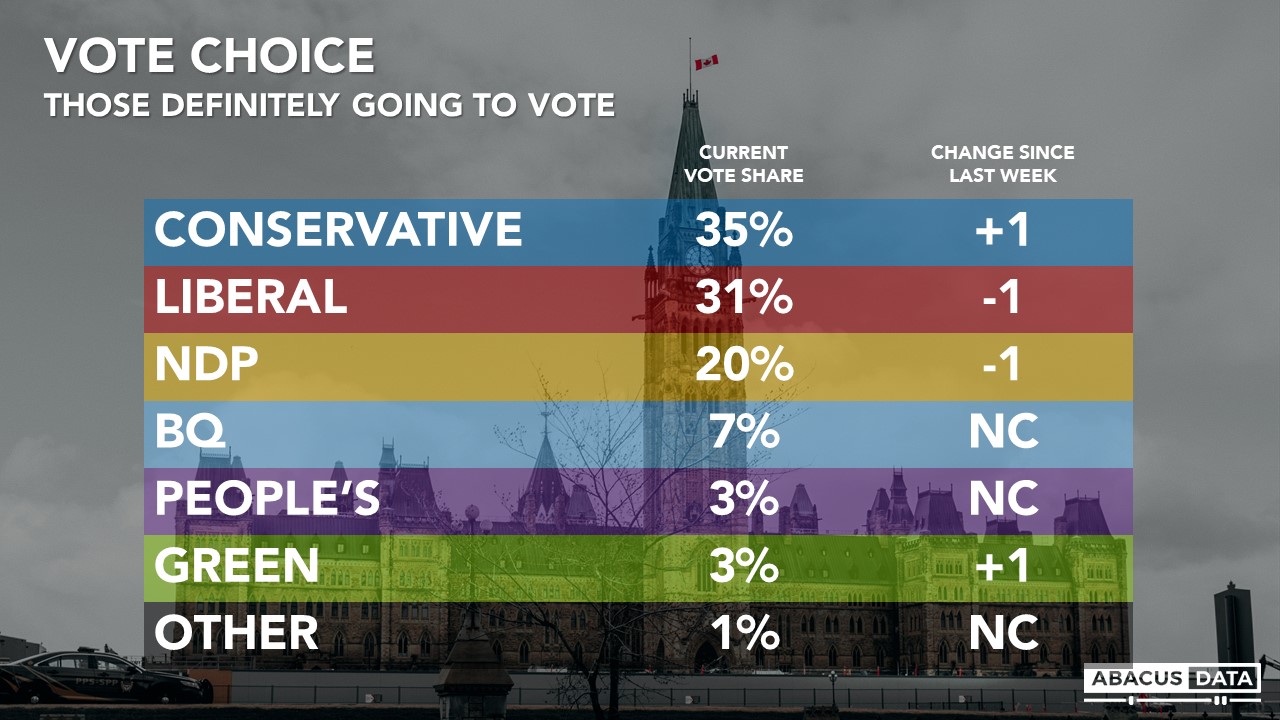 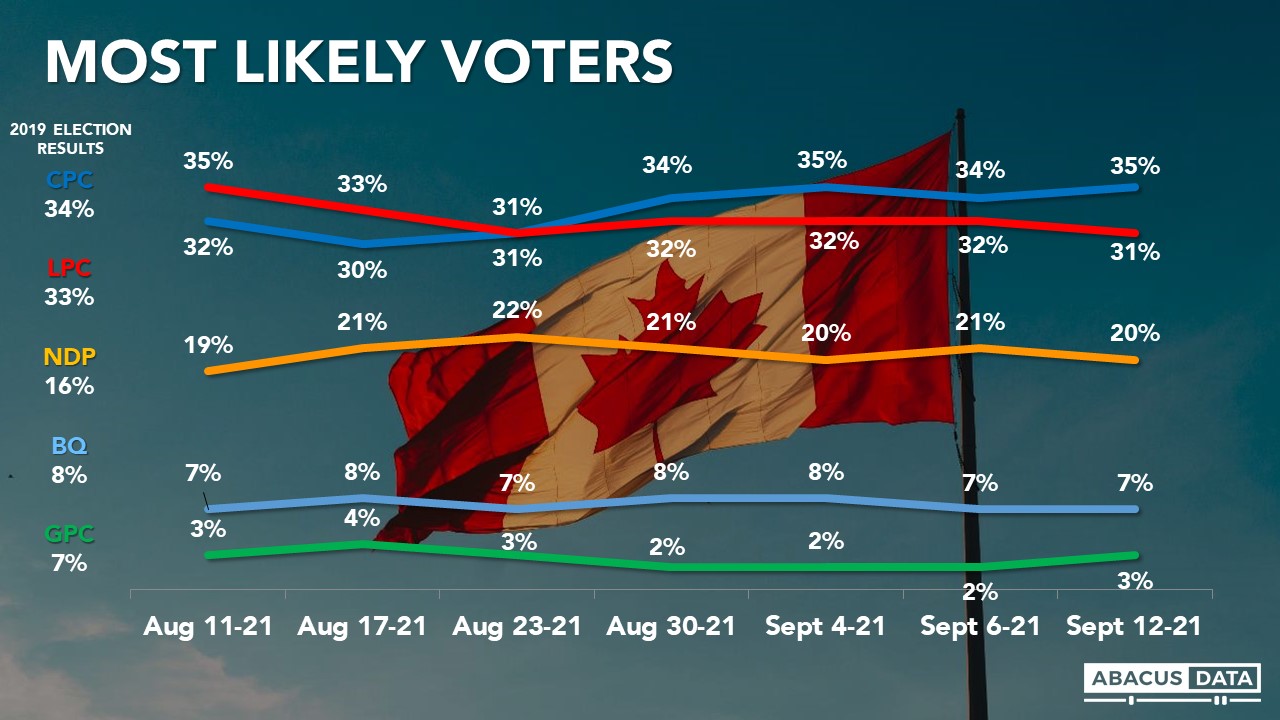 About half of francophones (49%) said they watched all of some of the French language Commission debate. The audience among anglophones for the English language debate was smaller, with only 41% indicating they had watched some or all of it. 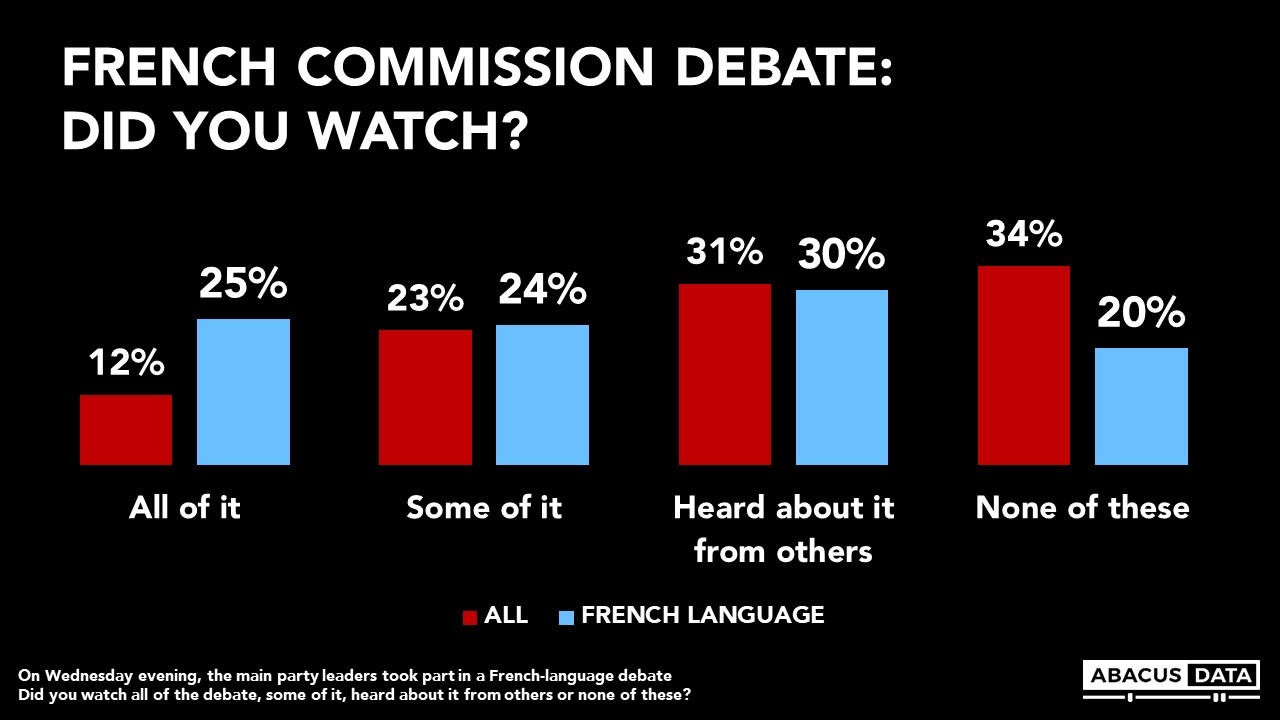 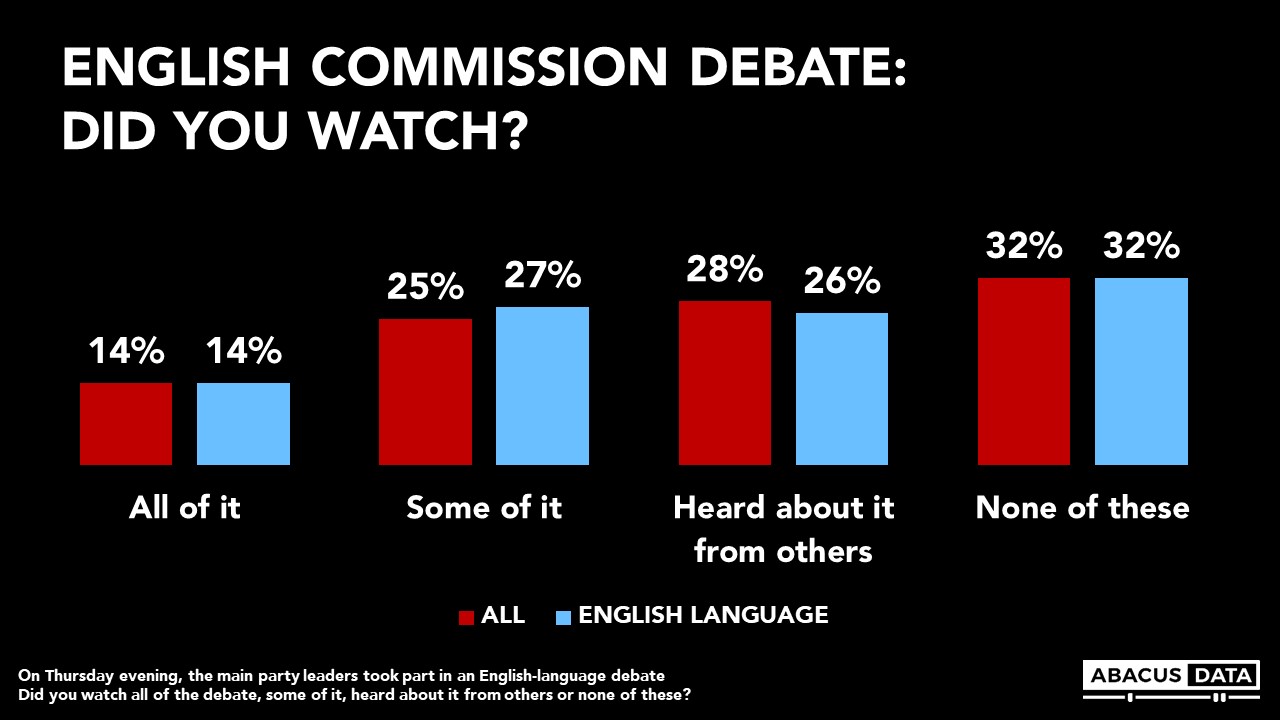 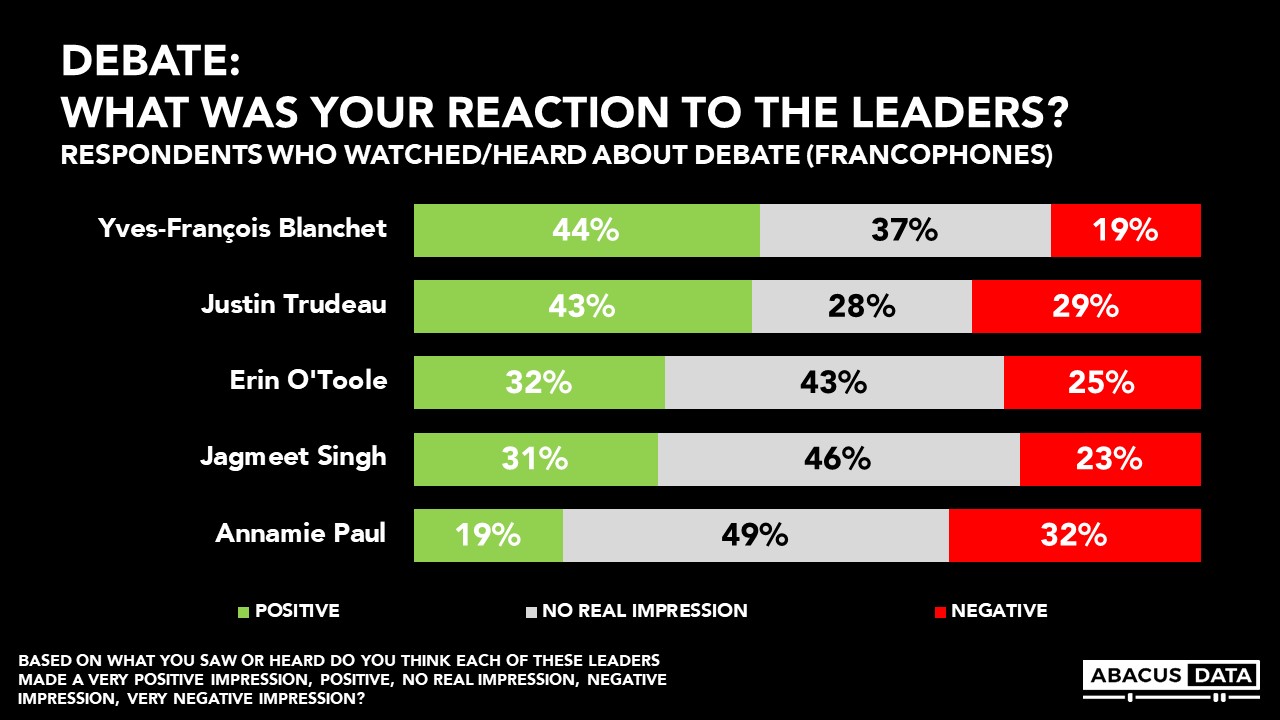 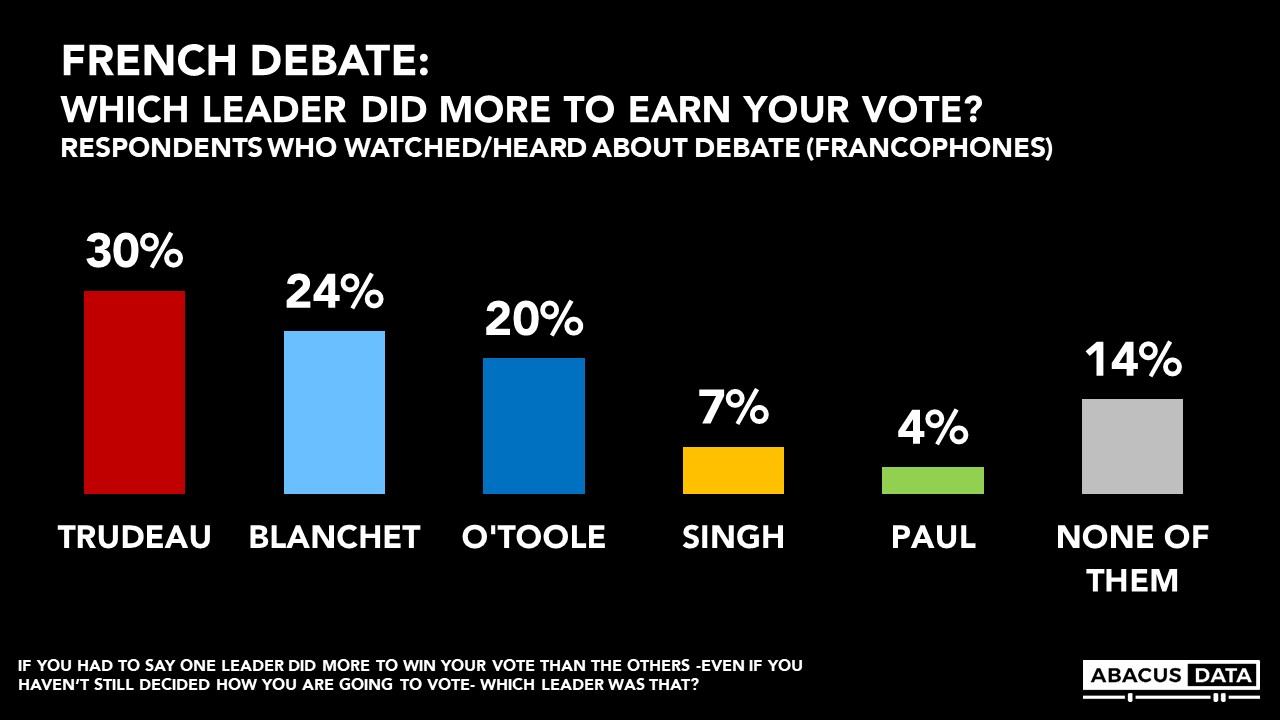 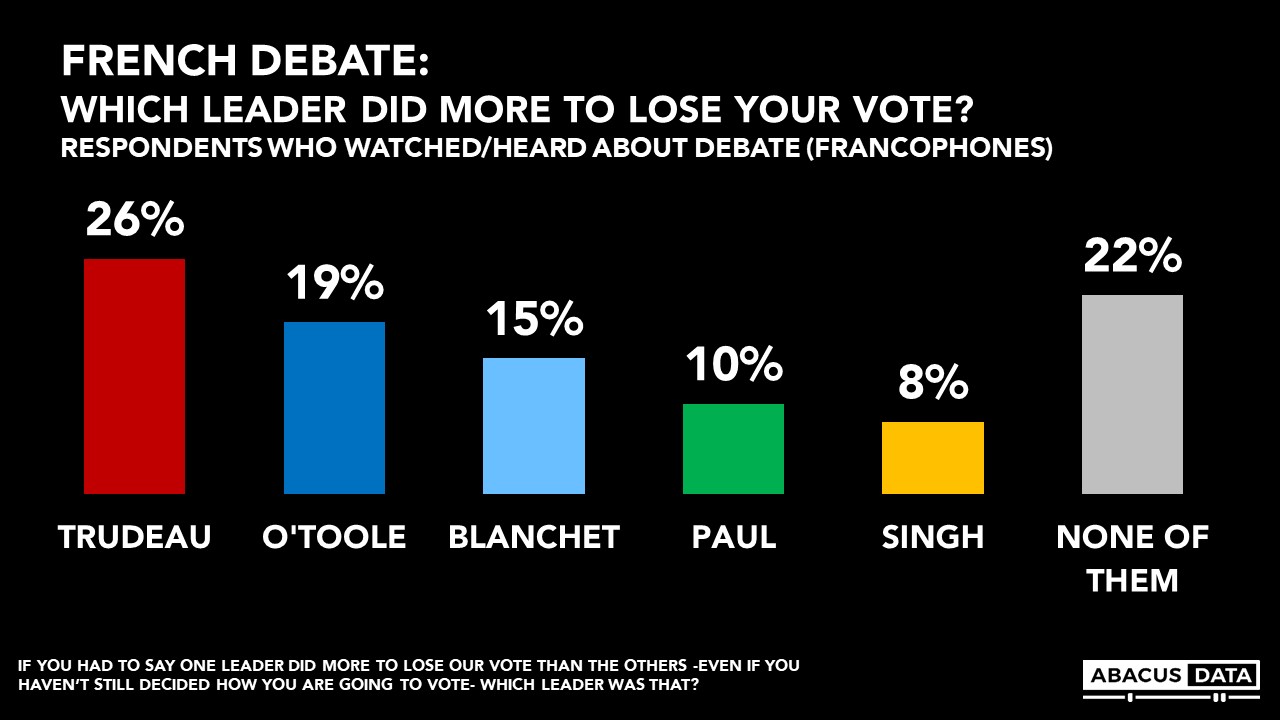 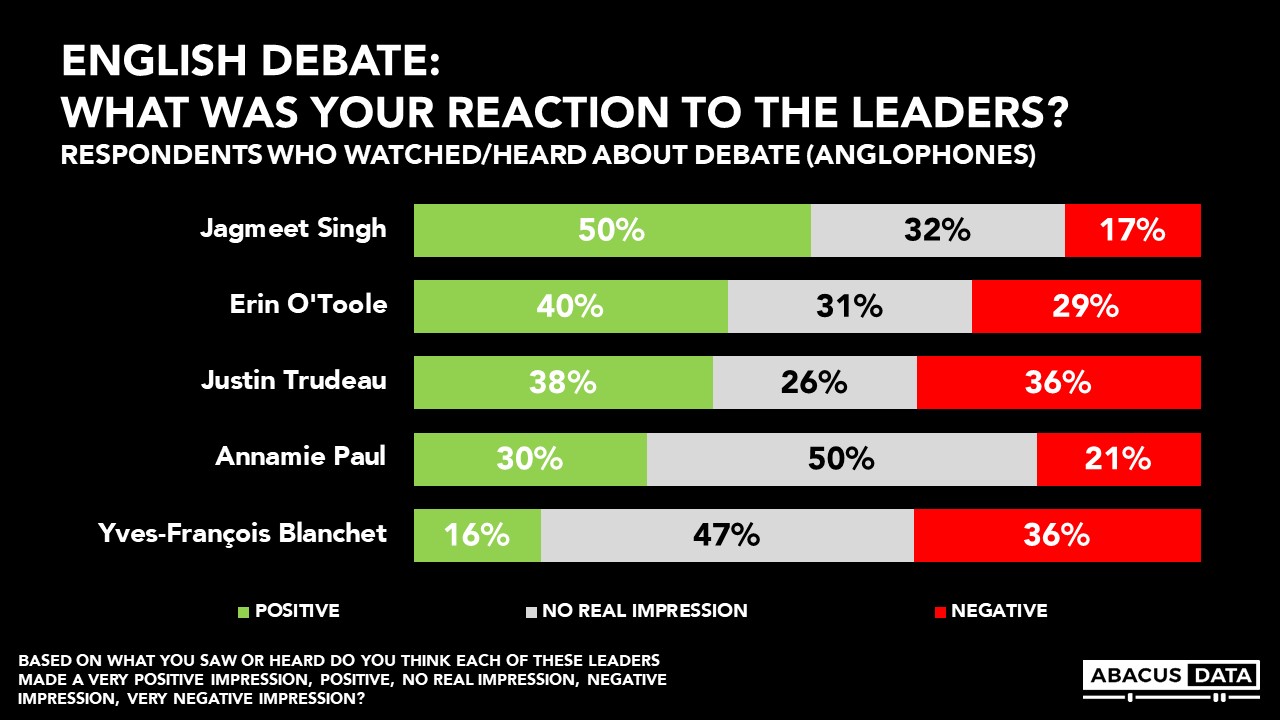 Overall, reaction to the debate was largely aligned with one’s vote inclination. 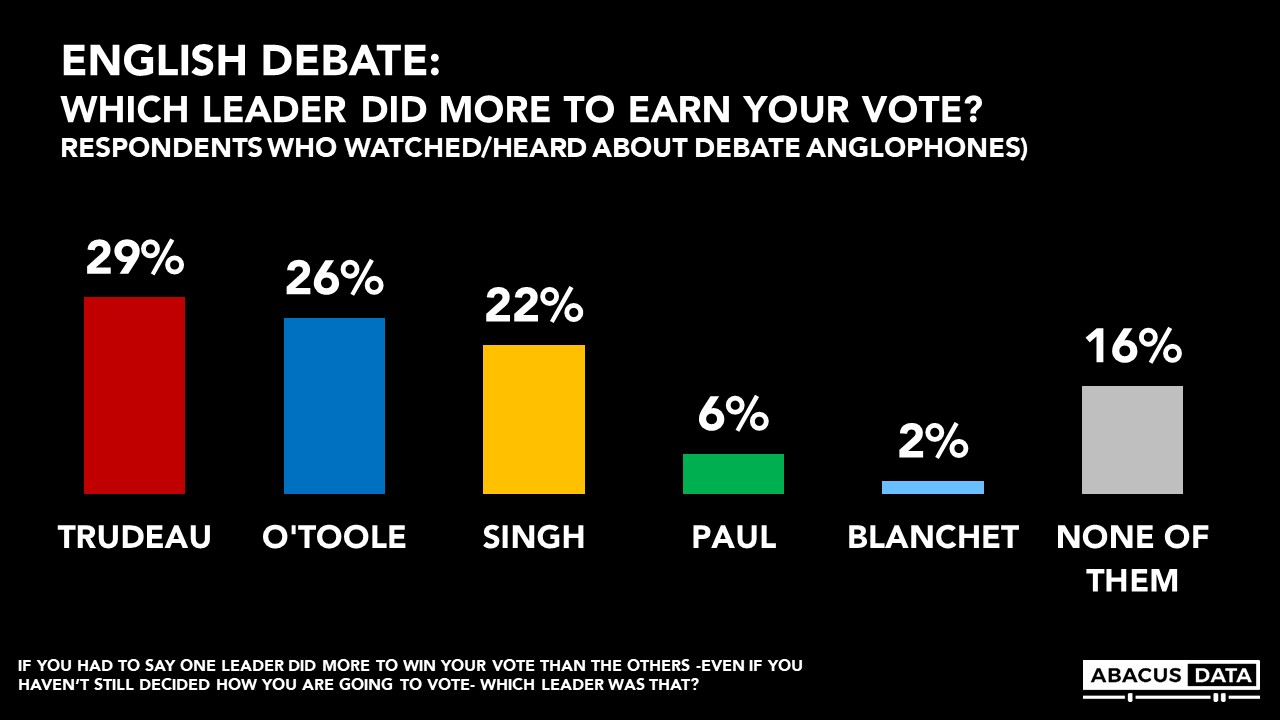 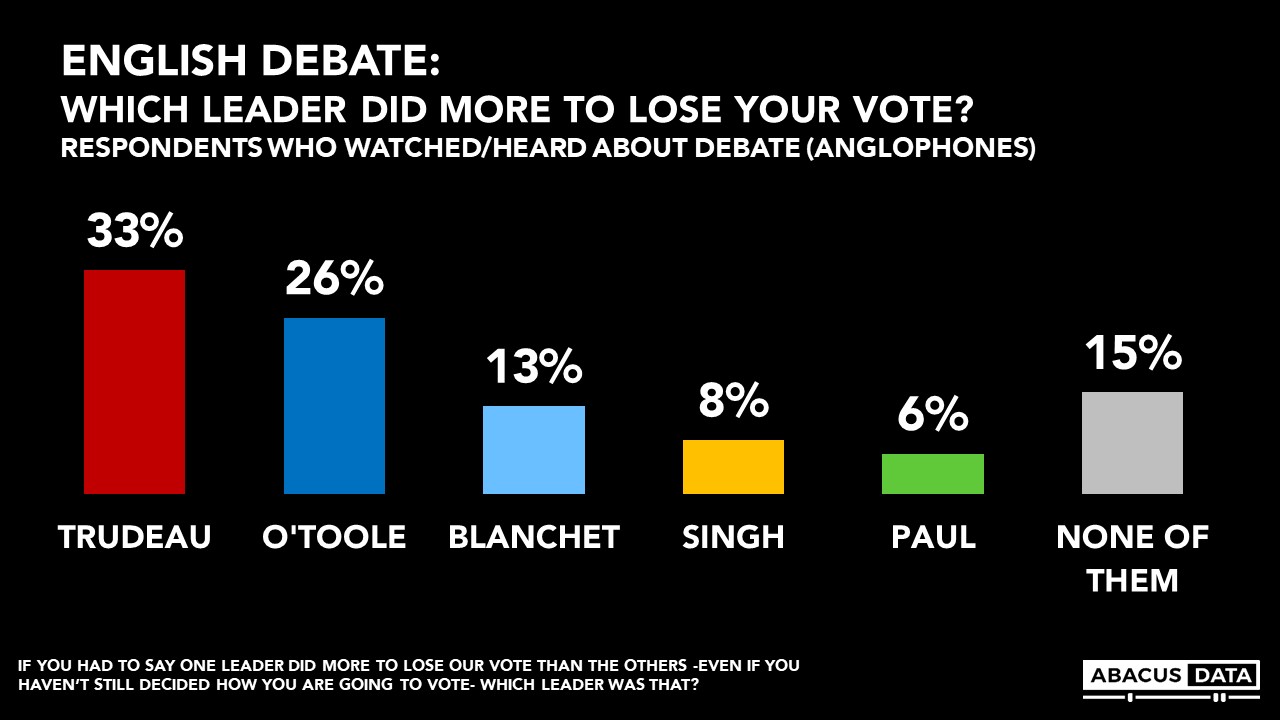 Asked which of four (most likely based on today’s numbers) outcomes they would prefer, 60% would prefer a Liberal victory (30% majority, 30% minority) while 40% would prefer a Conservative win (15% minority, 25% majority). This is mostly unchanged from our last survey. 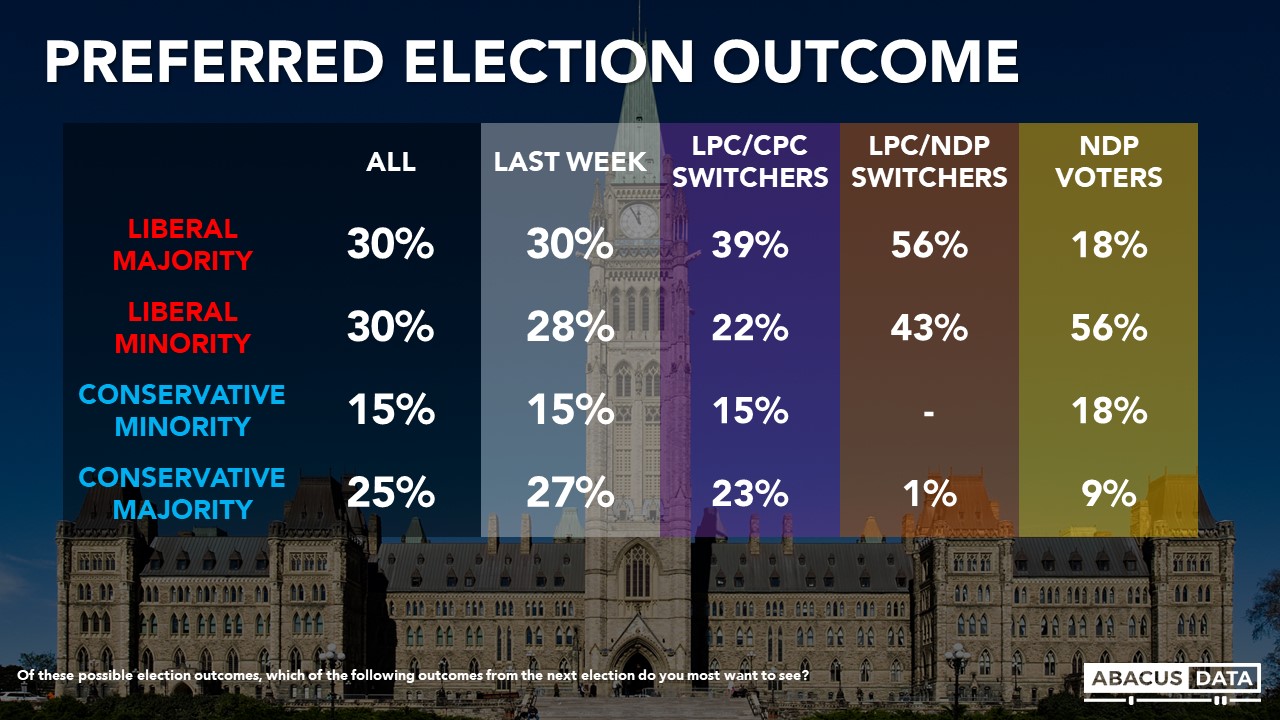 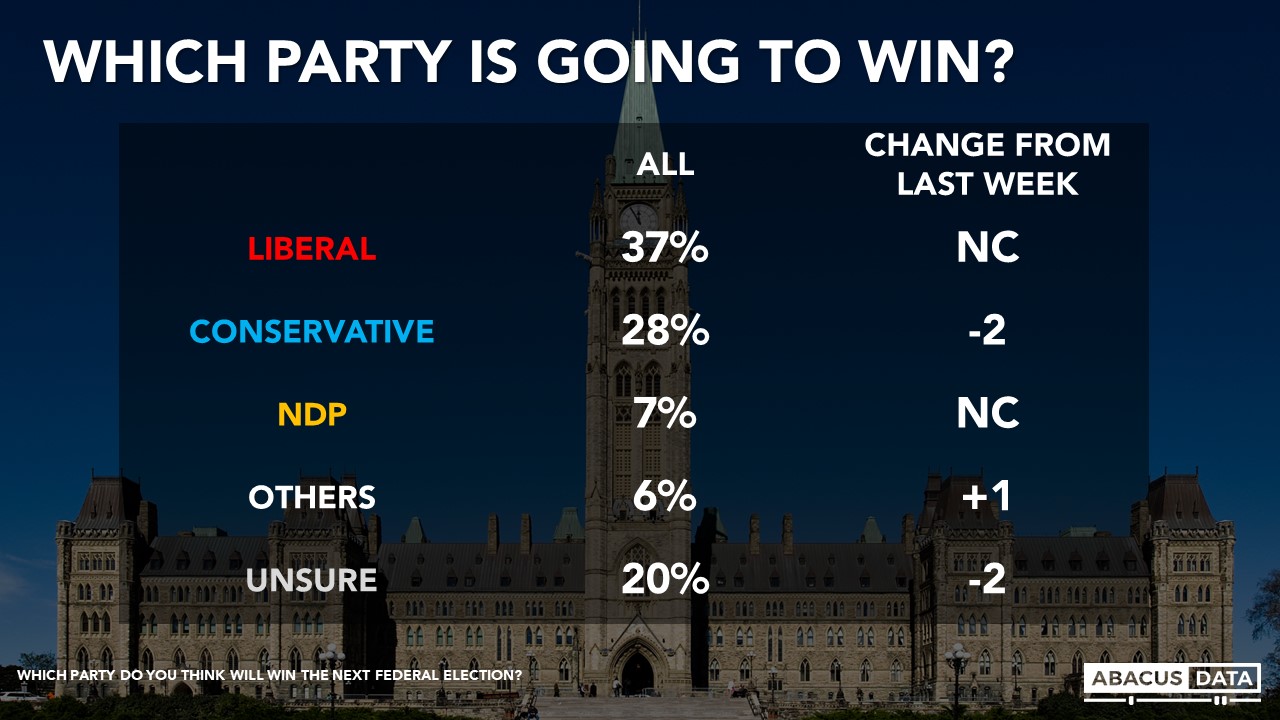 Those who would prefer the LPC to win but think the Conservatives are going to win makes up 5% of the electorate – holding steady from last week.

Justin Trudeau enjoys a positive impression among 40% and negative impressions among 43%, for a net score of -3. This is a slight increase in positives for Mr. Trudeau. Regionally, Mr. Trudeau’s net favourables are -2 in BC, -39 in Alberta, -18 in SK/MB, +2 in Ontario, +2 in Quebec, and +30 in Atlantic Canada. Among Liberal/NDP switchers Trudeau is +65. Among Liberal/Conservative switchers he is +53. 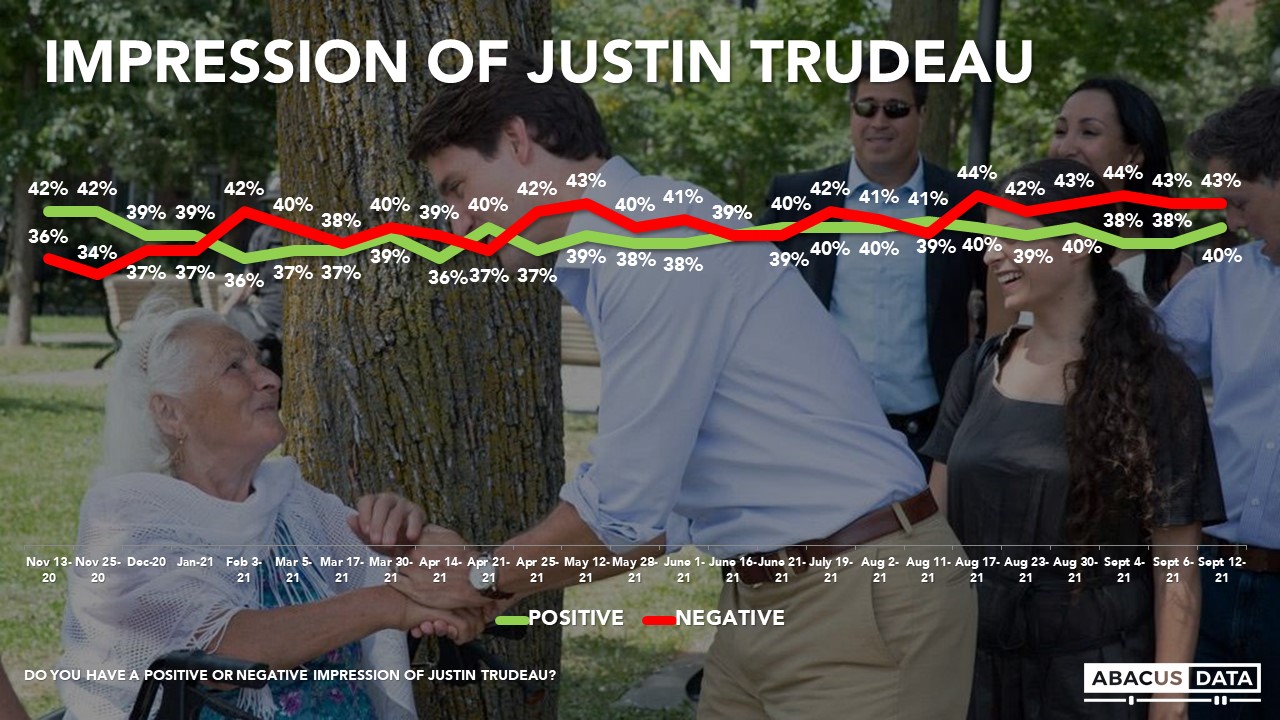 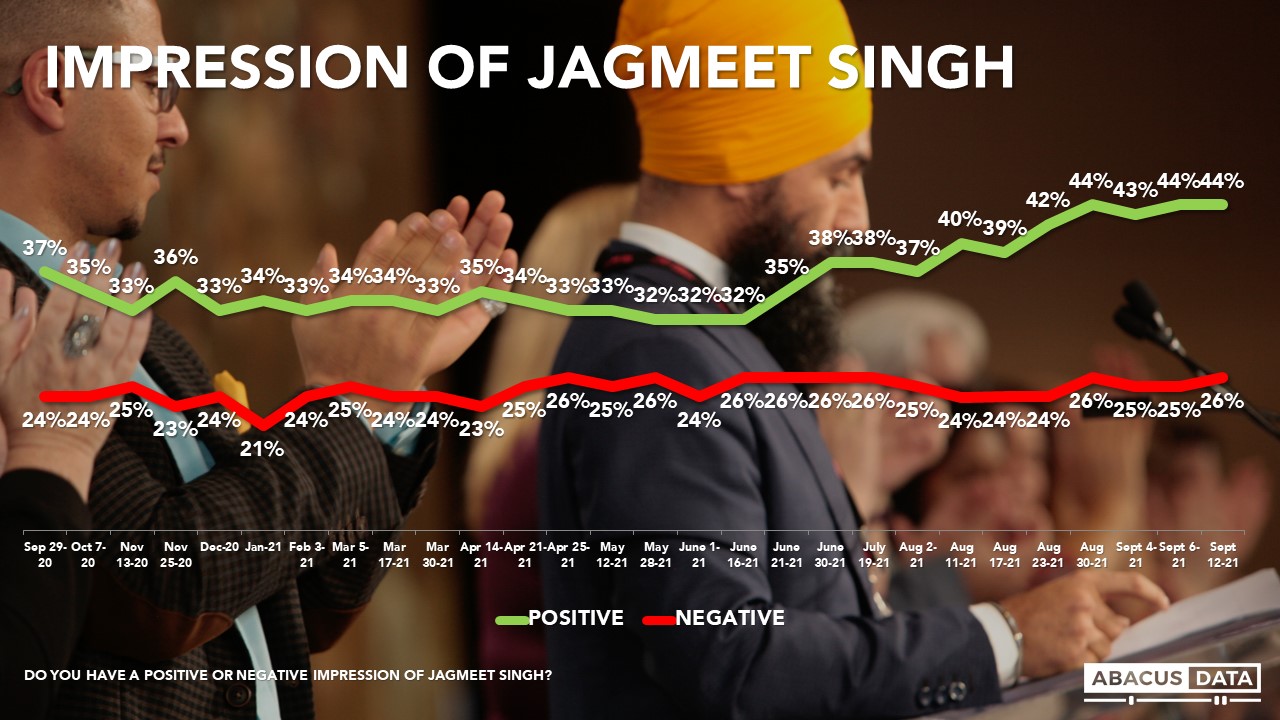 Today 31% have a positive impression of the Conservative leader Erin O’Toole unchanged) while his negatives are at 41% (+2) for a net score of -10. 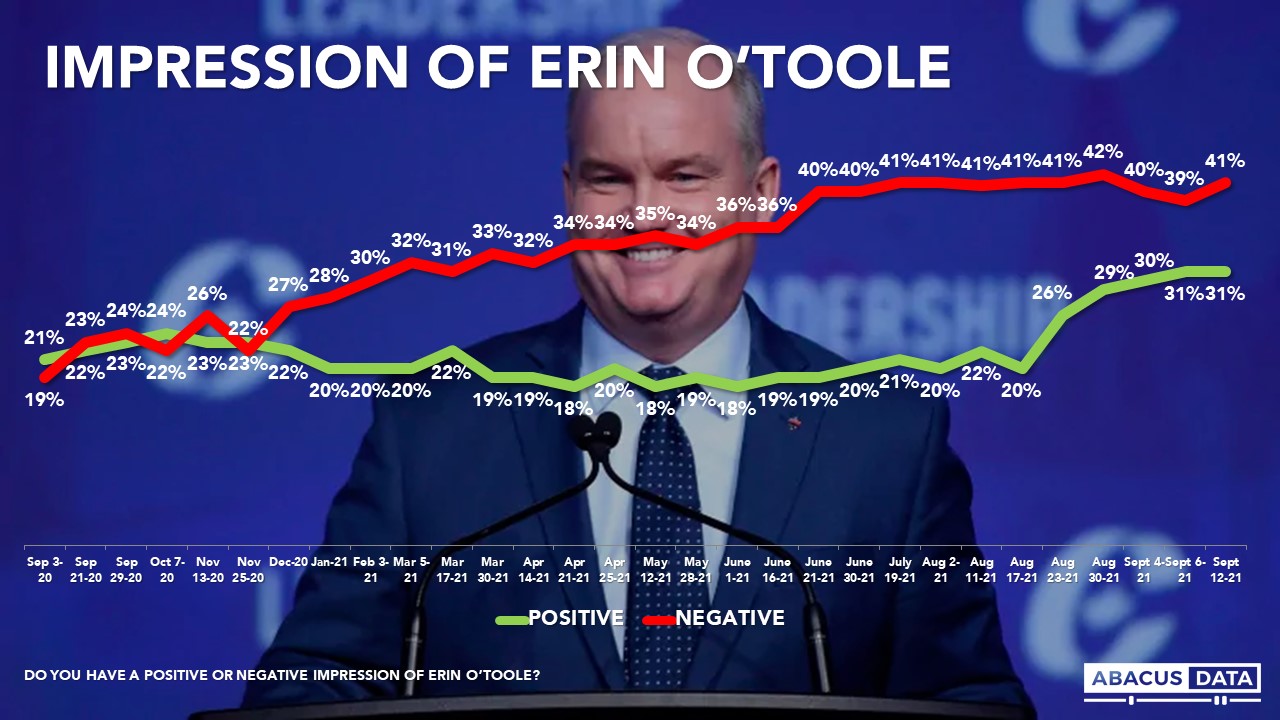 In Quebec, BQ Leader Mr. Blanchet is 39% positive and 29% negative for a net score of +10. Mr. Blanchet’s is largely unchanged from the last wave. 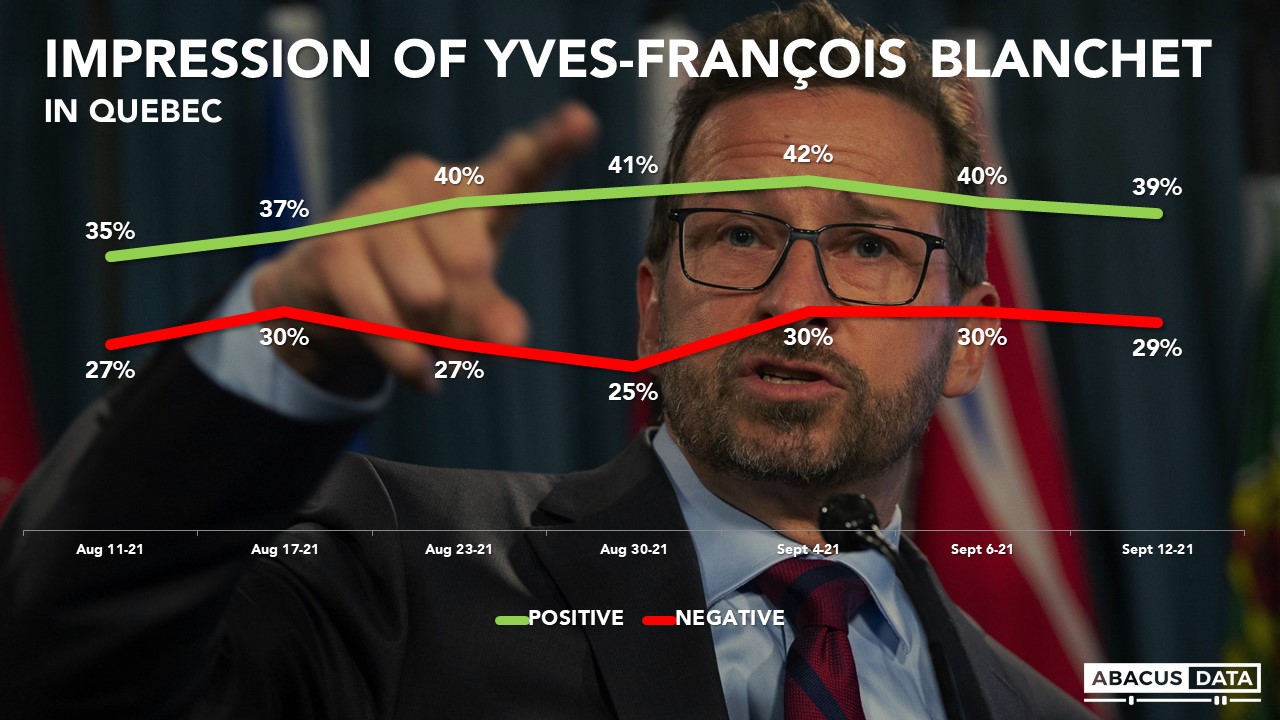 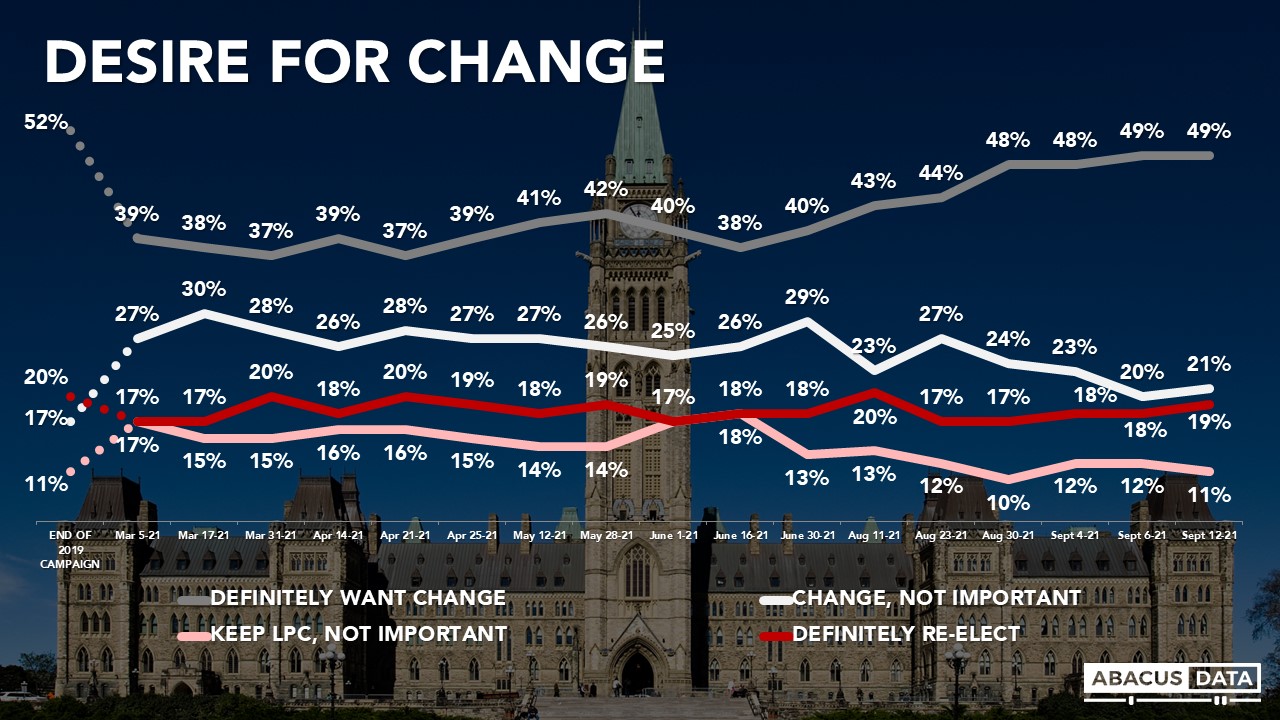 The vote preference by change group is important to understanding the election. Among those who prefer change but say it isn’t that important to them (21% of the electorate at the moment), the Liberals have opened up a 13-point lead over the NDP with the Conservatives in third. Liberal re-election hopes continue to ride on how this group ultimately leans and Mr. Trudeau’s party seem to be gaining over timing.

Among those who say they want to keep the Liberals in office but it’s not important to them, 74% would vote Liberal compared with 9% who would vote NDP. 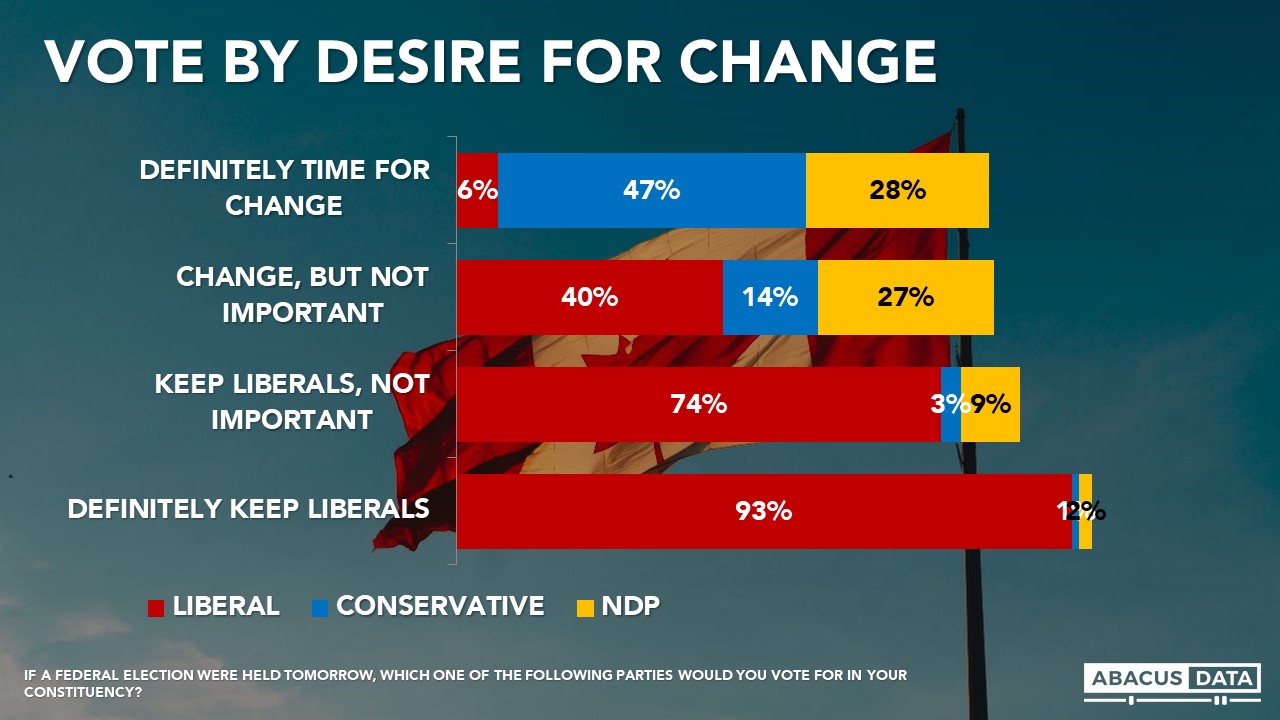 According to Bruce Anderson: “The debates are over and the campaign enters its final week with more good news for the Liberals than for their competitors, although the outcome is far from clear. Mr. O’Toole’s reputation gains have stalled, and the Liberals have gained some precious margin in Ontario and Quebec. BC looks like a vital and potentially determining race. Perhaps the most important news in this poll for the Liberals is that the desire for change may be softening and among those who were leaning towards a change but not committed to that position, the Liberals find more support this week.

None of the leaders performed badly enough to affect their prospects in this election, and it’s arguable that the PM accomplished more of what he needed to accomplish than his main rivals did in the debates.”

According to David Coletto: “With a week to go the race remains tight nationally but the Liberals have opened up some leads in vote-rich Ontario and Quebec. Right now, the Liberals have the advantage as the debates don’t seem to have made much difference except for reinforcing some pre-existing ideas people had of the leaders.

In my opinion, the most important data point in this release is the question about the desire for change. At 49%, those definitely wanting a change in government remain below the 2019 number and has hasn’t moved in a few weeks now.

Instead of articulating a clear rationale for why the Liberals should be replaced, the Conservative and NDP campaigns have focused on the election call itself. Undoubtedly people are annoyed by the election, but so far, it doesn’t look like either has made much progress in convincing past Liberal voters to switch their support.

Because they have repeatedly claimed this election was “unnecessary” they may have inadvertently helped the Liberals buffer against growth in a desire for change.”

The survey was conducted with 2,000 Canadian adults eligible to vote from September 10 to 12, 2021. A random sample of panelists were invited to complete the survey from a set of partner panels based on the Lucid exchange platform. These partners are typically double opt-in survey panels, blended to manage out potential skews in the data from a single source.

The margin of error for a comparable probability-based random sample of the same size is +/-2.1%, 19 times out of 20. 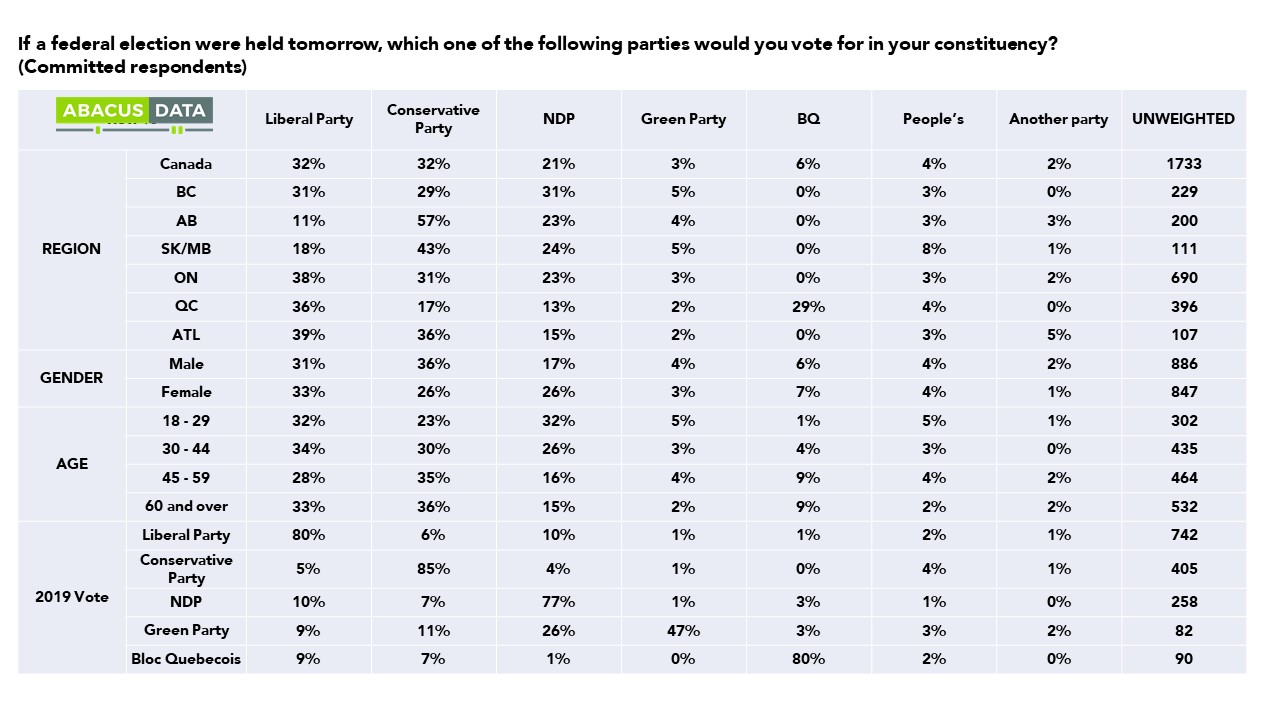 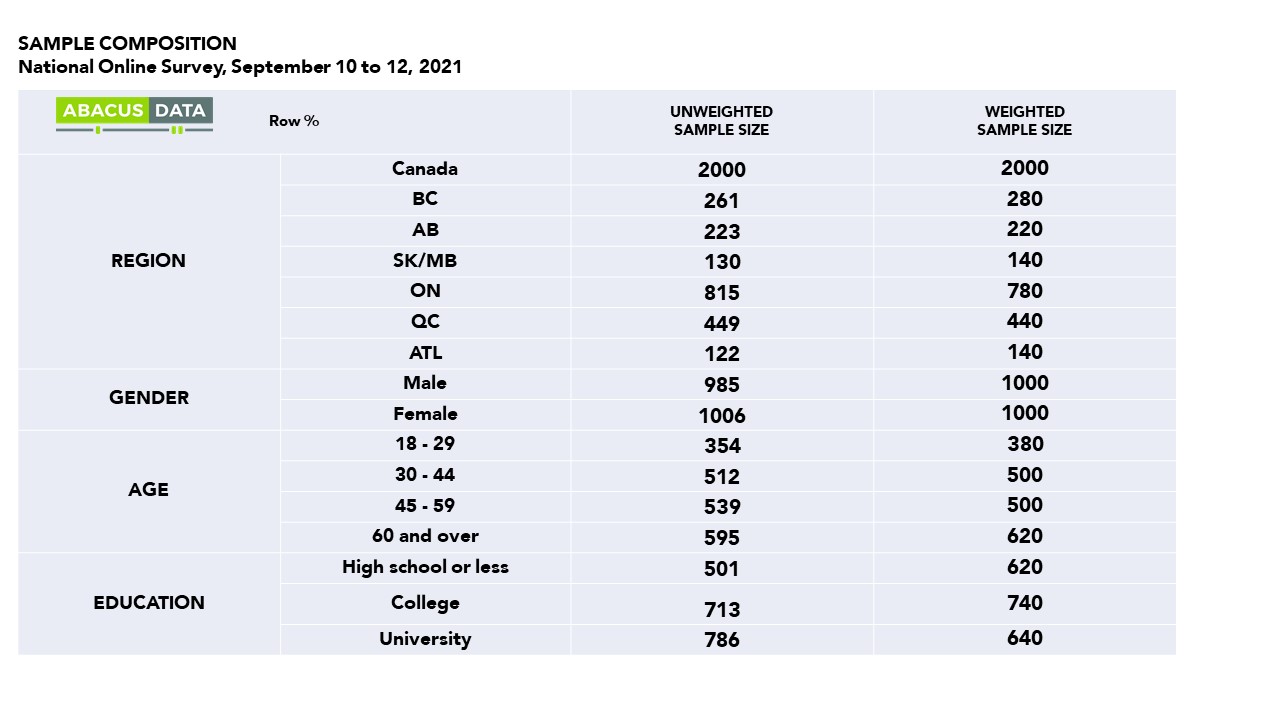