Earlier this week, my colleague Oksana Kishchuck reported on some interesting data about what is driving voters’ decisions. On average, respondents said that more than half of their vote decision would be based on (1) which party was best on the issue they cared most about and (2) whether the party could actually deliver on its plan. 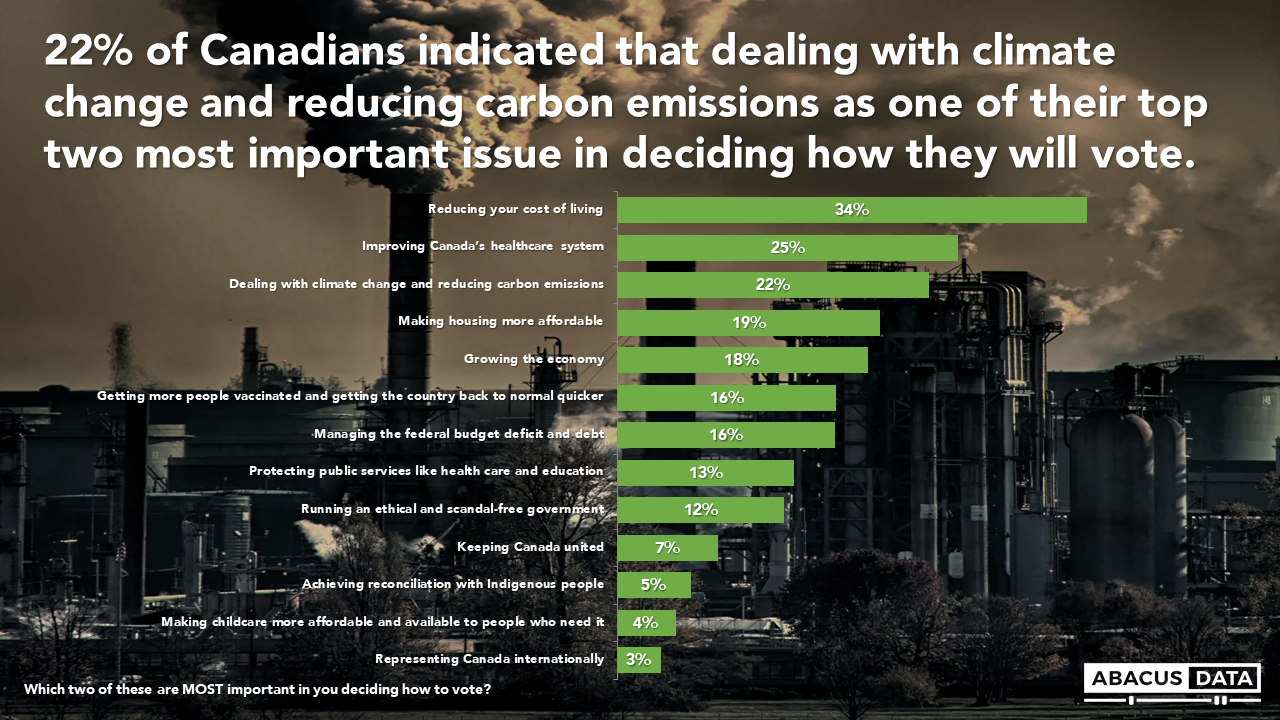 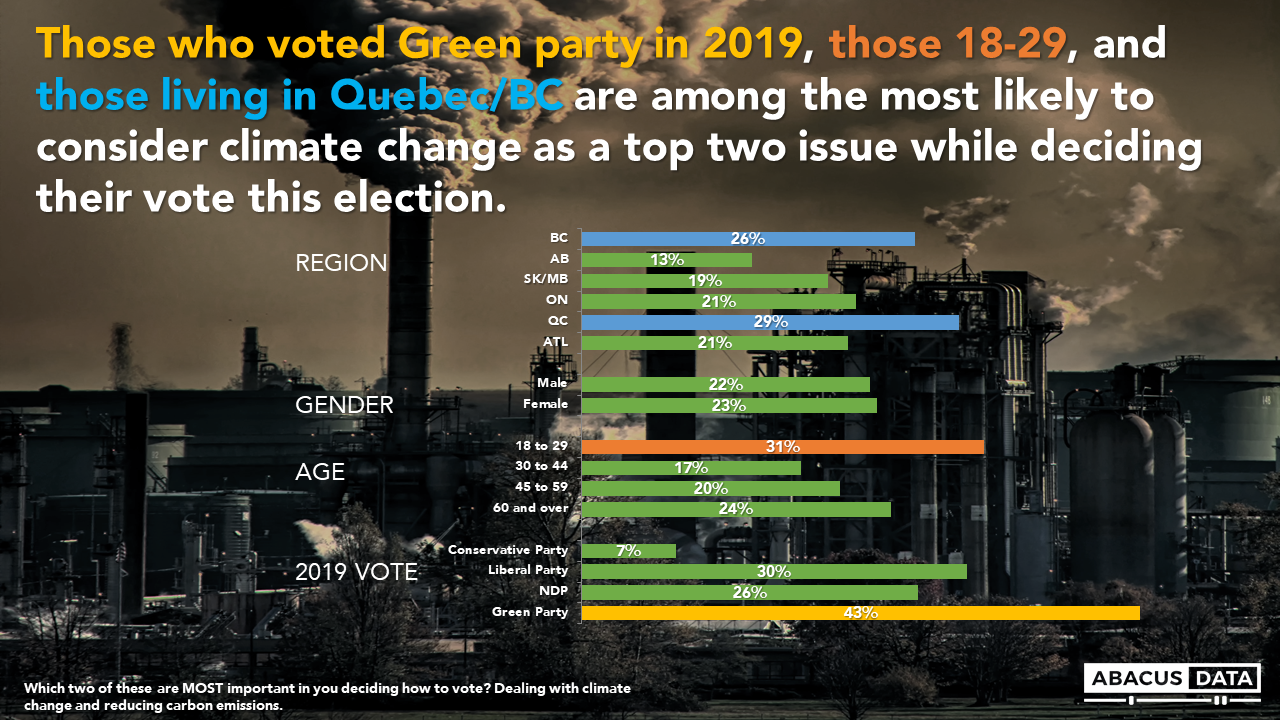 Among the general population, 36% of Canadians believe that the party and leader who would best deal with climate change and reducing carbon emissions is Justin Trudeau and the Liberals. However, there are some stark differences when this is compared among those most likely to include it in their top issues (and therefore also the most likely to vote for a party in line with these issues). Among those younger than 30, Jagmeet Singh and the NDP are seen as the best for the job. However, among Quebec and BC residents, Justin Trudeau and the Liberals remain their top choice. Unsurprisingly, previous Green Party supporters believe Annamie Paul and the Green Party to be the best for the job. 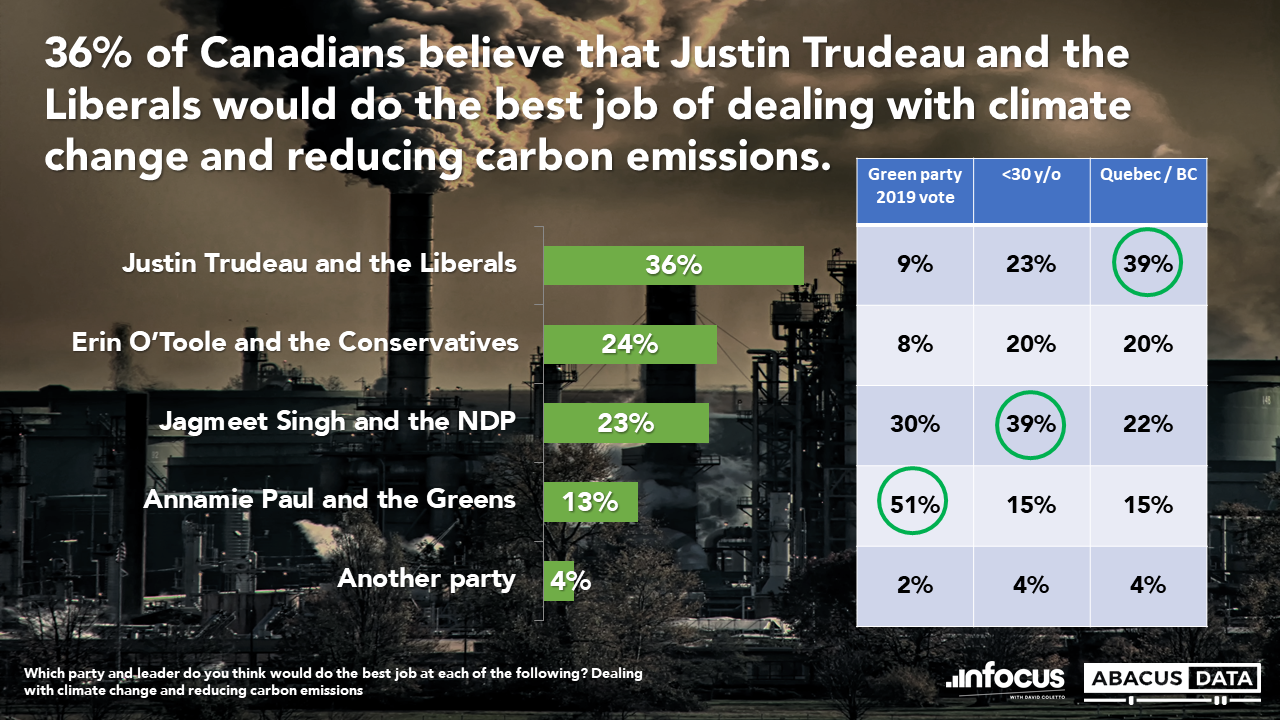 According to Michael Monopoli: Voters are paying attention to how parties are aligning themselves with the many key issues that are driving this election. When it comes to dealing with climate change and reducing carbon emissions, there are a few key demographic groups that value this issue significantly more than others. Those who voted for the green party in 2019, those under 30 years of age, and residents of BC and Quebec are among the most likely to include Climate change and the environment in their top two.

Focusing in on those who are most likely to include it in their top two, there is very little agreement on who would be best suited for the job. Previous Green Party supporters, unsurprisingly, would prefer Annamie Paul and the Green Party, but those under 30 would prefer Jagmeet Singh and the NDP and those in Quebec and BC would prefer Justin Trudeau and the Liberals. This goes to show that no one party or leader is dominating within the topic of climate change and reducing carbon emissions.

Our survey was conducted online with 2000 Canadians aged 18 and over from August 24 to 29, 2021. A random sample of panellists was invited to complete the survey from a set of partner panels based on the Lucid exchange platform. These partners are double opt-in survey panels, blended to manage out potential skews in the data from a single source.

The margin of error for a comparable probability-based random sample of the same size is +/- 2.2%, 19 times out of 20. In Canada the data were weighted according to census data to ensure that the sample matched Canada’s population according to age, gender, educational attainment, and region.