We just completed a national survey of 2,000 Canadian adults (from March 12 to 17). Here’s what the survey found:

DIRECTION OF THE COUNTRY

By a narrow margin, more Canadians feel the country is going in the right direction (42%) rather than the wrong direction (38%). While that number is stable with our last wave, we continue to see the Biden election causing an uptick in feelings about the path the US is on. 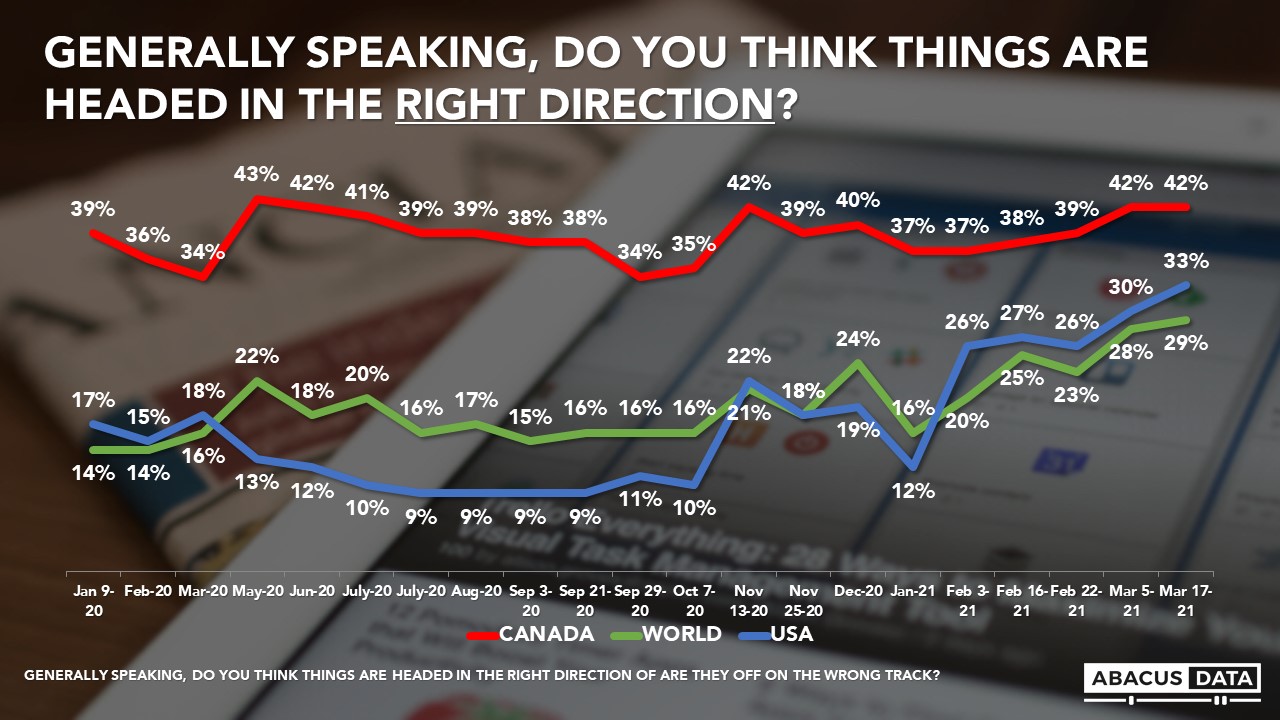 These national numbers in Canada obscure some differences that are worth noting.

• Among those under 45, the plurality likes the way things are going. Over that age the reverse is true.

• Everywhere but in the Prairie provinces, solid pluralities are happy with the direction of things in Canada.

• Those with high school education are unhappy, those with more education see things more positively.

Because of the unusual circumstances of a global pandemic, we began asking people who felt the country was going in the wrong direction if they felt that this was more due to governments in Canada making the wrong choices or because of factors beyond Canada’s control. What we find is that 73% of the “wrong direction” respondents blame Canadian governments, while 27% don’t. 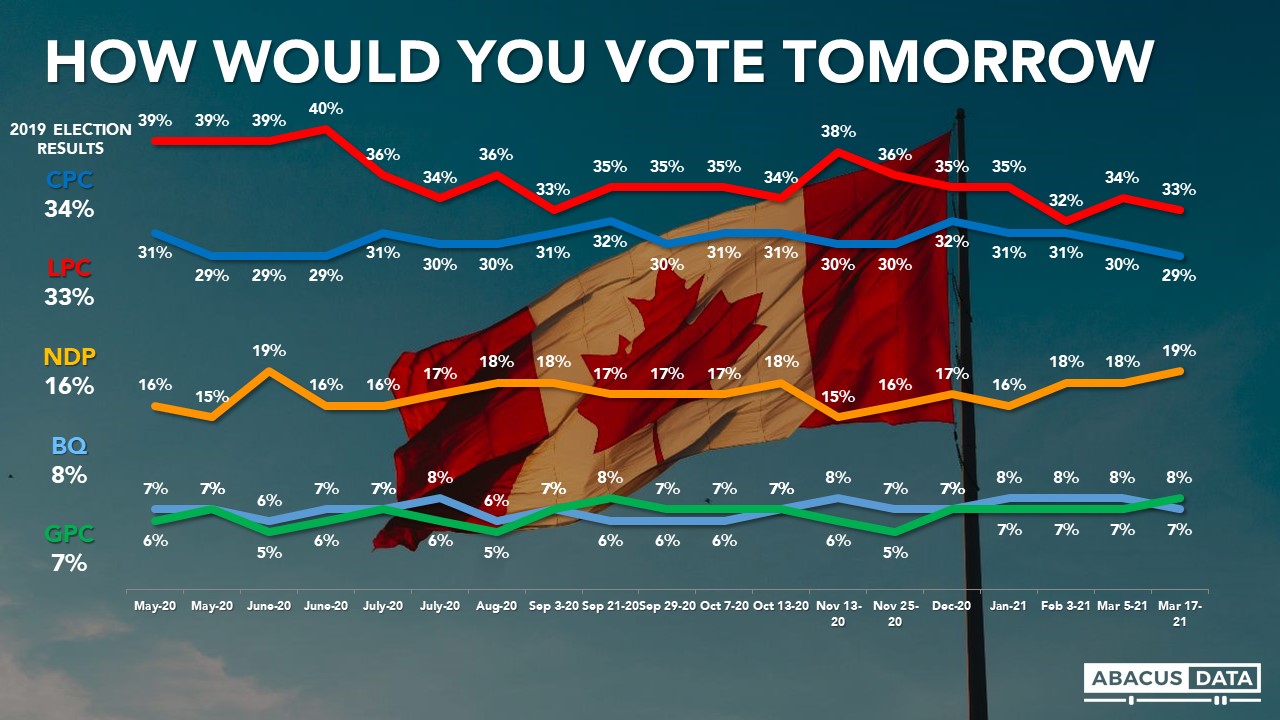 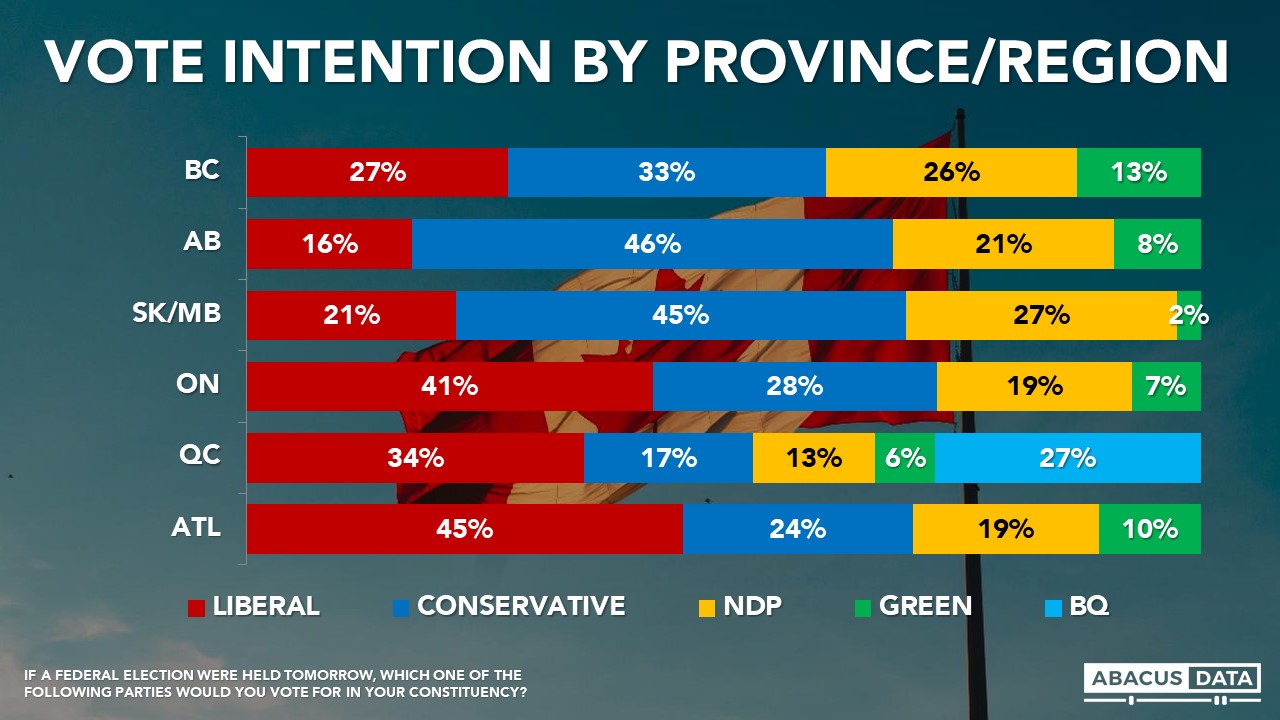 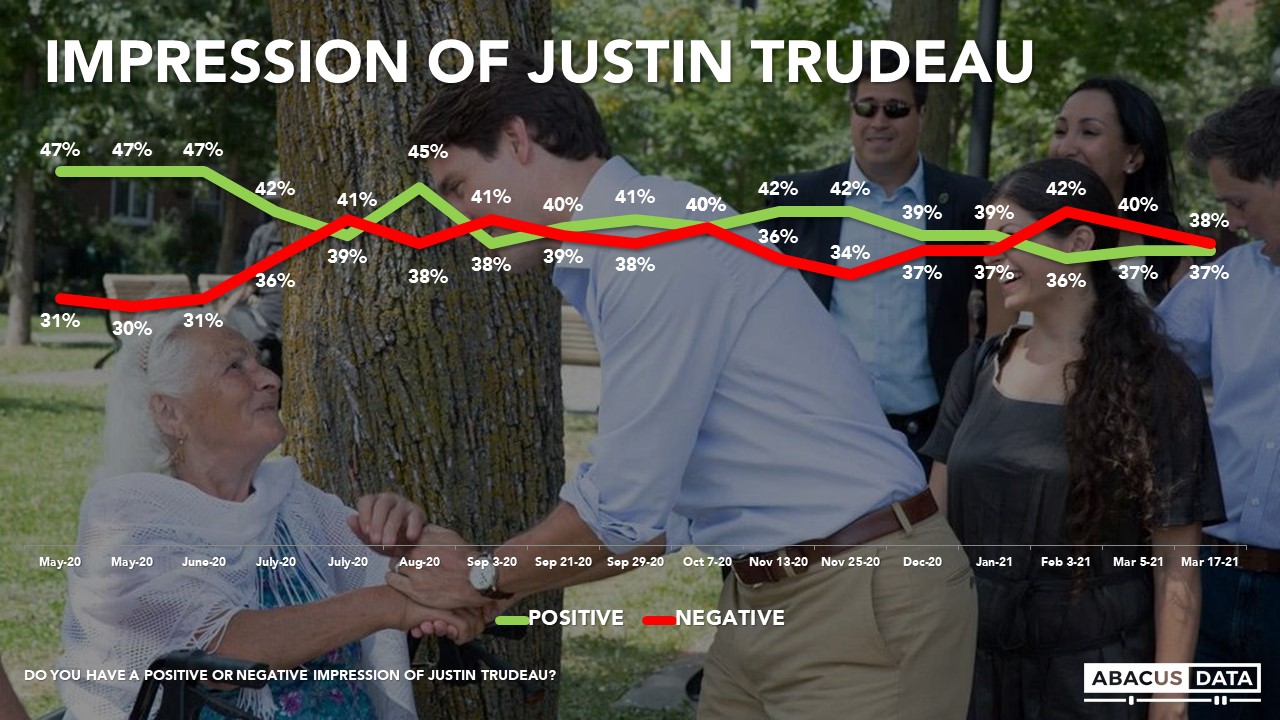 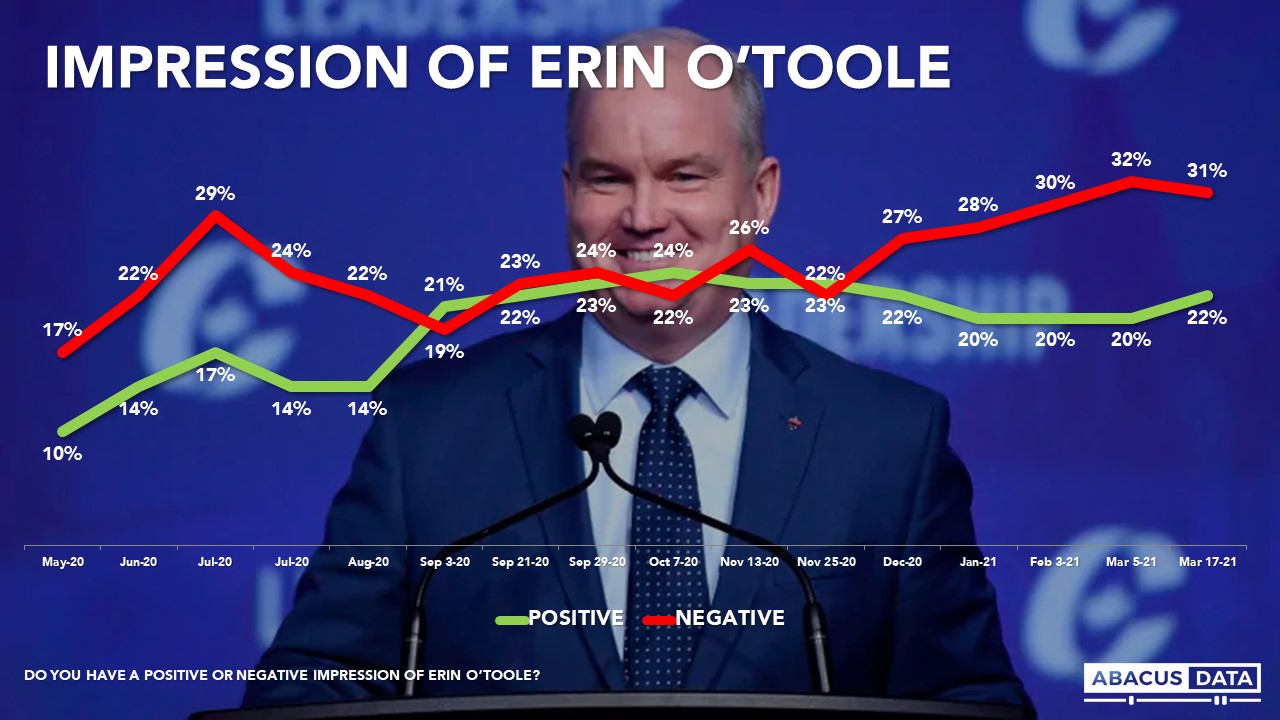 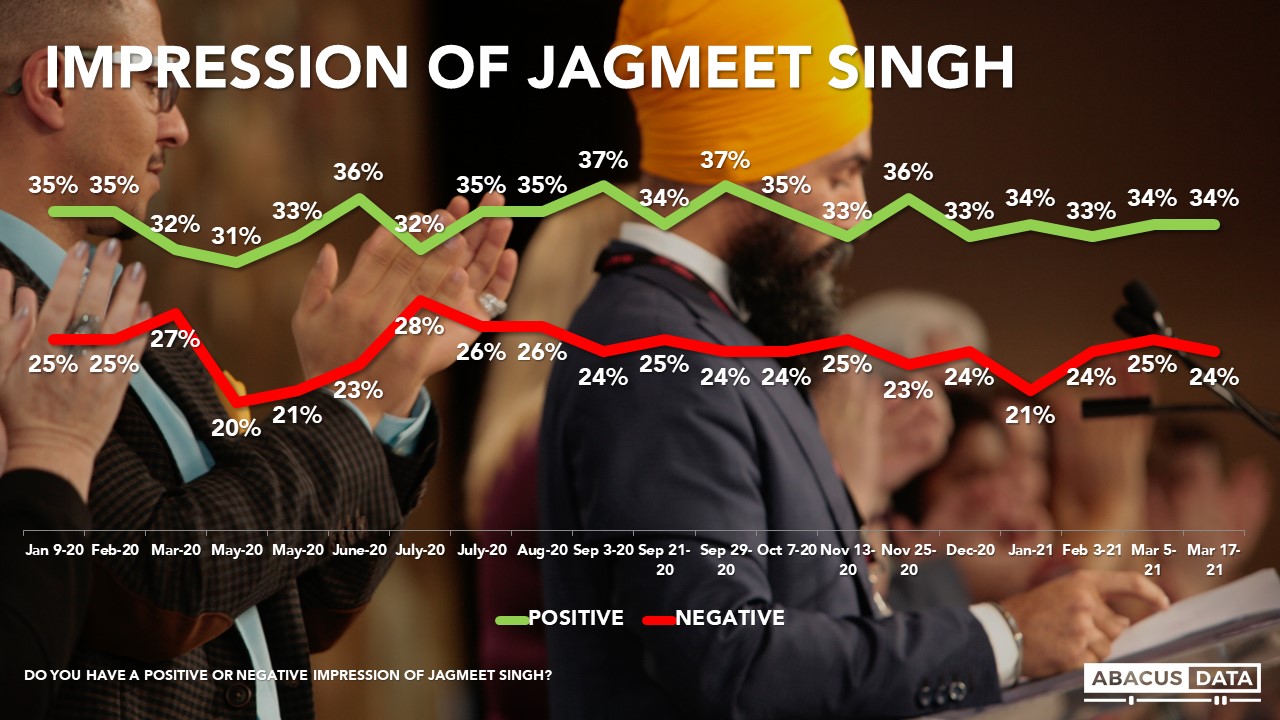 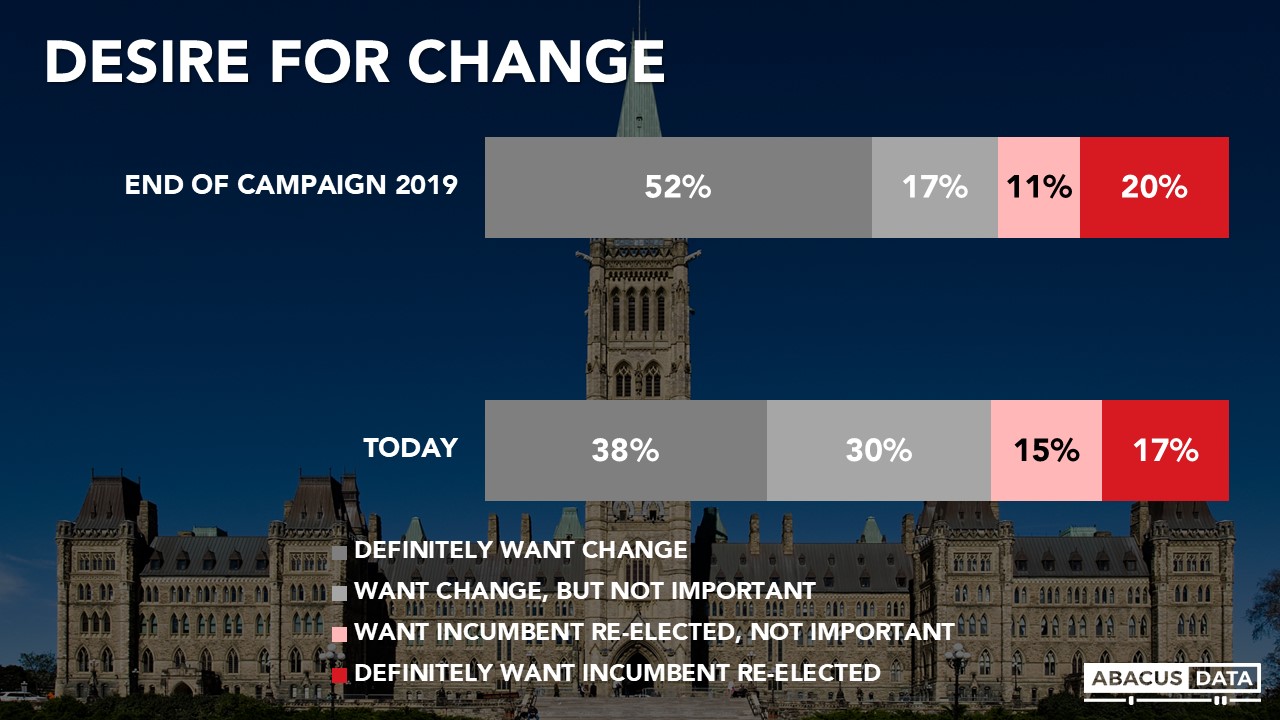 17% definitely want to see the Liberals re-elected, and 15% prefer to see them re-elected but don’t feel strongly about it.  What has changed is the intensity of desire for change, not the breadth of that desire.

Among those who definitely want change voting intentions do not coalesce around a single choice: 54% would vote Conservative, 25% NDP, 8% BQ, 7% Green, and 5% for the People’s Party of Canada. Seeing less intensity of desire for change is potentially a major challenge for the Conservatives if they are to improve upon their 2019 result.

Something that may cause pause for the Liberals is that among their 2019 voters, only 49%  definitely want to see the party re-elected, and another 25% say they would prefer that outcome, but don’t feel strongly about it.  That leaves about a quarter of the 2019 coalition leaning towards a desire for change.

According to Bruce Anderson: “Canadians are mostly suspending engagement in partisan political choice right now, as they continue to grind through the pandemic and look towards a better future. While the balance of data suggests the Liberals could win another mandate if an election were held now, possibly a larger one if the split in Quebec is as we see it in this wave, there is also a bit of softness in the numbers for the government. The NDP and its leader Jagmeet Singh are finding space for progressive conversation, especially among younger voters, something that will no doubt attract attention from the Liberals as they map an electoral strategy.

The Conservatives on the other hand are struggling, at risk of losing touch with too many centrist voters in central and eastern Canada, and also watching some of their base shift to populist conservative alternatives. Mr. O’Toole will likely know that he needs to shake up his approach if he wants to gain traction, increase the intensity of desire for change, and make the case that the Conservatives are the best alternative.

Right now, Conservatives are at risk of being the 4th choice among voters under 30 – a prospect that should be of real concern. The party cannot keep battling internally on issues like abortion, transgender rights, whether and how to act on climate change, and at the same time have little or nothing to say about housing affordability, the gig economy and attracting next generation economic investment and expect to resonate with younger voters.”

According to David Coletto: “Not much has changed from our late survey suggesting we may be in a period where political views remain steady, especially as the risk of a third COVID wave increases and the public focuses on the implications of that.

A few things stand out to me in these numbers.

First is the increase in vote share for the NDP and Greens. Back in November, 21% of decided voters said they would vote either NDP (15%) or Green (5%). Today, it is 27% (NDP 19%, Green 8%). The Liberals should be concerned about this as a weaker Conservative Party has not translated into a higher Liberal vote share. The Greens and NDP are finding wide support among younger Canadians (48% would vote either NDP or Green), a demographic critical to a future Liberal majority.

Second, the Conservatives can’t count on an enthusiastic base like in 2019. Given that the Conservative vote share has slowly dropped over the past few months, from 32% to 29%, the party will need an energized base to make up for its weakness in the broader electorate. The problem with that strategy requires people to really dislike the incumbents. We see far fewer people who are angry at Mr. Trudeau and far fewer who are strongly motivated to want to kick out the Liberals.”

The survey was conducted with 2,000 Canadian adults from March 12 to 17, 2021. A random sample of panelists were invited to complete the survey from a set of partner panels based on the Lucid exchange platform. These partners are typically double opt-in survey panels, blended to manage out potential skews in the data from a single source. 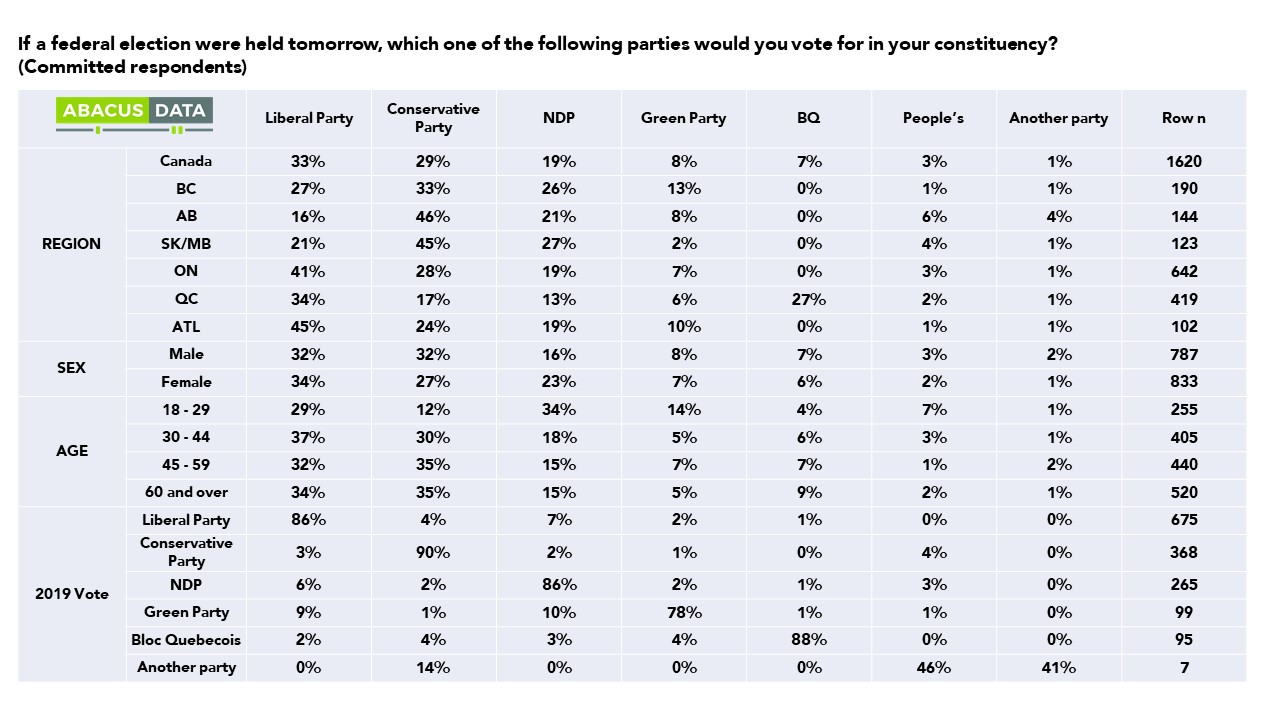 When the economy "re-opens", what will it take for people to come back in?
Looks, Gender, and Ideas: Do these matter?
Hill Times: Layton's Legacy is Authenticity
Tags: Canadian politicsCOVID-19Erin O'TooleJagmeet SinghJustin Trudeau