In our latest nationwide survey, we looked at a range of political questions.

LIBERALS HAVE A 4-POINT LEAD NATIONALLY, INCLUDING A 10-POINT LEAD OUTSIDE OF ALBERTA AND SASKATCHEWAN 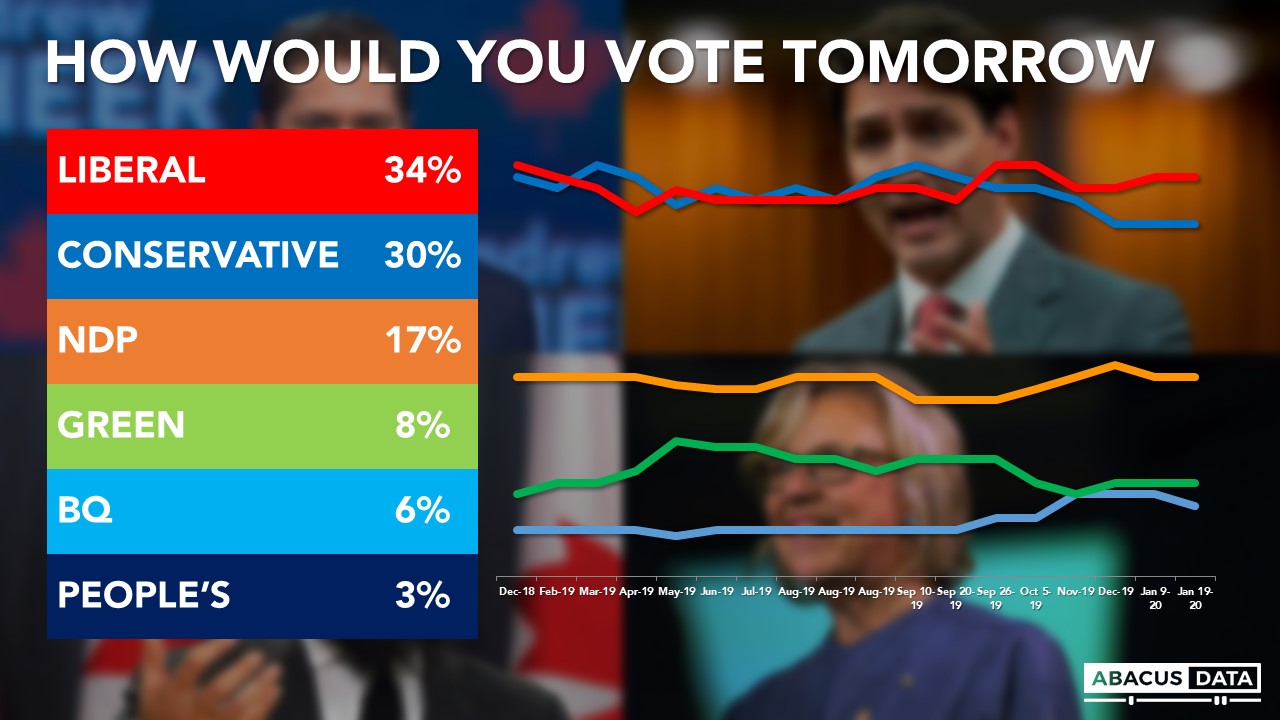 In Alberta and Saskatchewan, the Conservatives have a massive 37-point lead over the Liberals. In the rest of the country, the Liberals hold a 10-point lead. 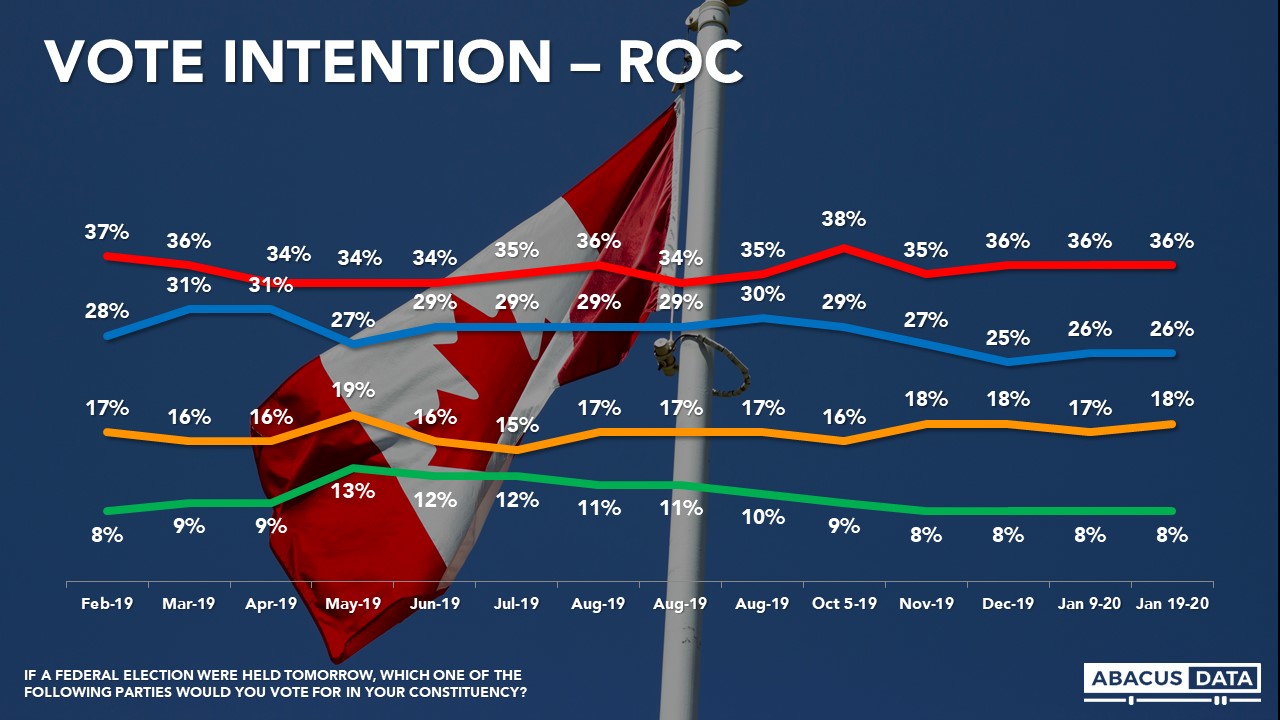 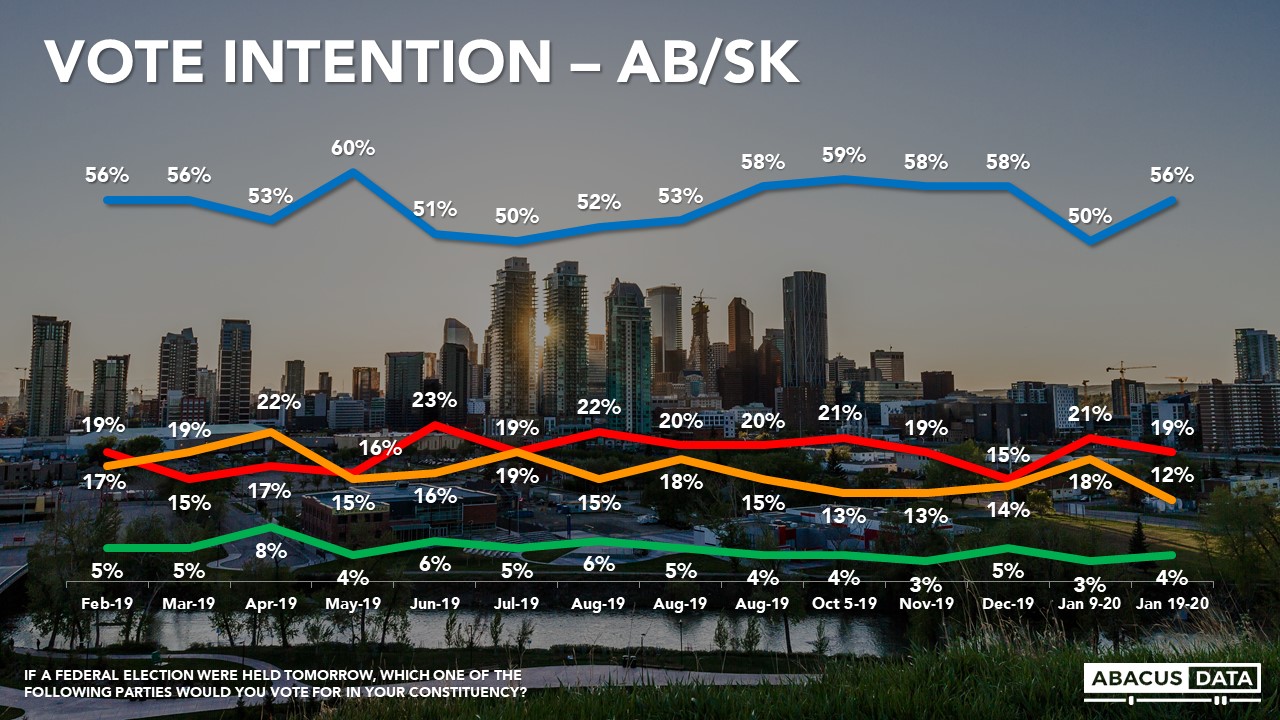 Our latest numbers show the Liberals with an11-point lead in Atlantic Canada, an 11-point lead in Quebec and a 10-point lead in Ontario. British Columbia is a close race among the three major parties. The Conservatives dominate in Alberta and Saskatchewan.

We have seen improved Liberal support among voters under 30 years of age, where the governing party now has twice as much support as the Conservative Party, underscoring one of the key challenges facing the Conservatives as they look for a new leader. There were points last year where that gap was about 5 points, compared to the 20 point gap today.

FEDERAL GOVERNMENT DISAPPROVAL DOWN TO LOWEST LEVEL SINCE FEBRUARY 2019.

38% approve of the job the federal government is doing, compared to 42% who disapprove. This indicator has shown gradual improvement from the low point recorded as the SNC-Lavalin issue took centre stage last winter. 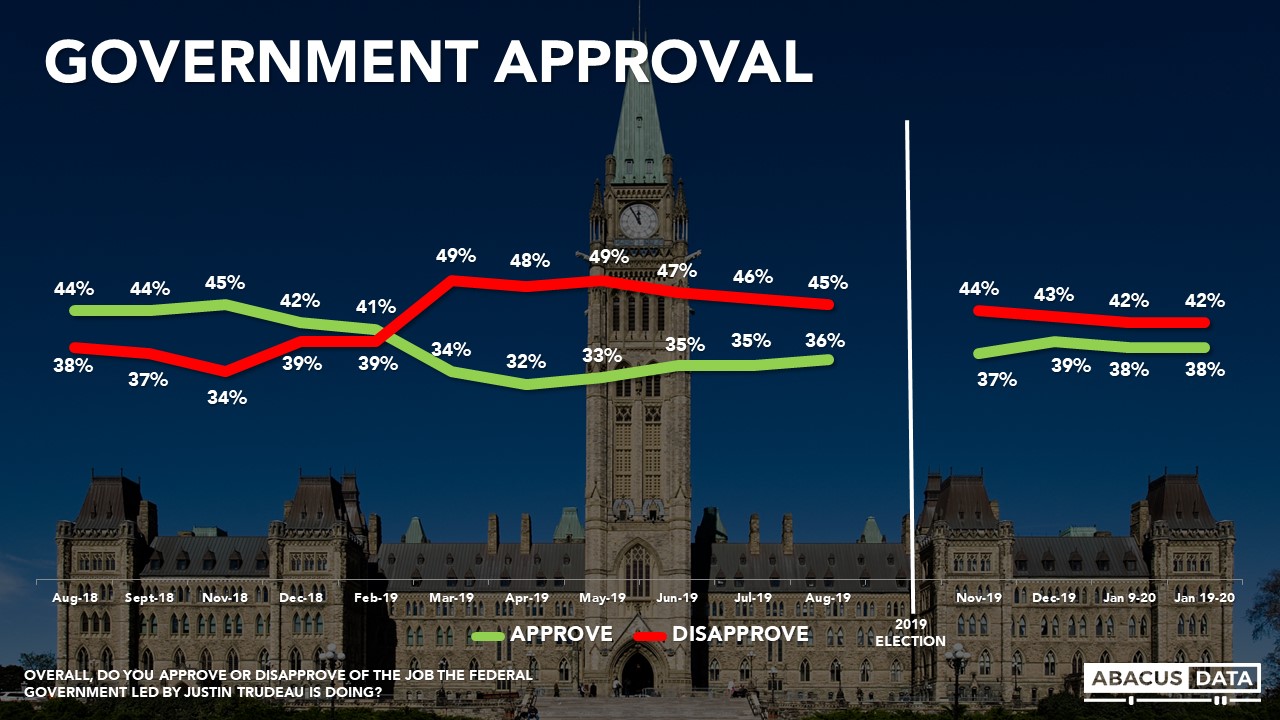 Outside of Alberta and Saskatchewan, 40% currently approve of the federal government’s performance while 39% disapprove. The government’s approval hit a low of 34% in April 2019 but has improved by 6-points since then. 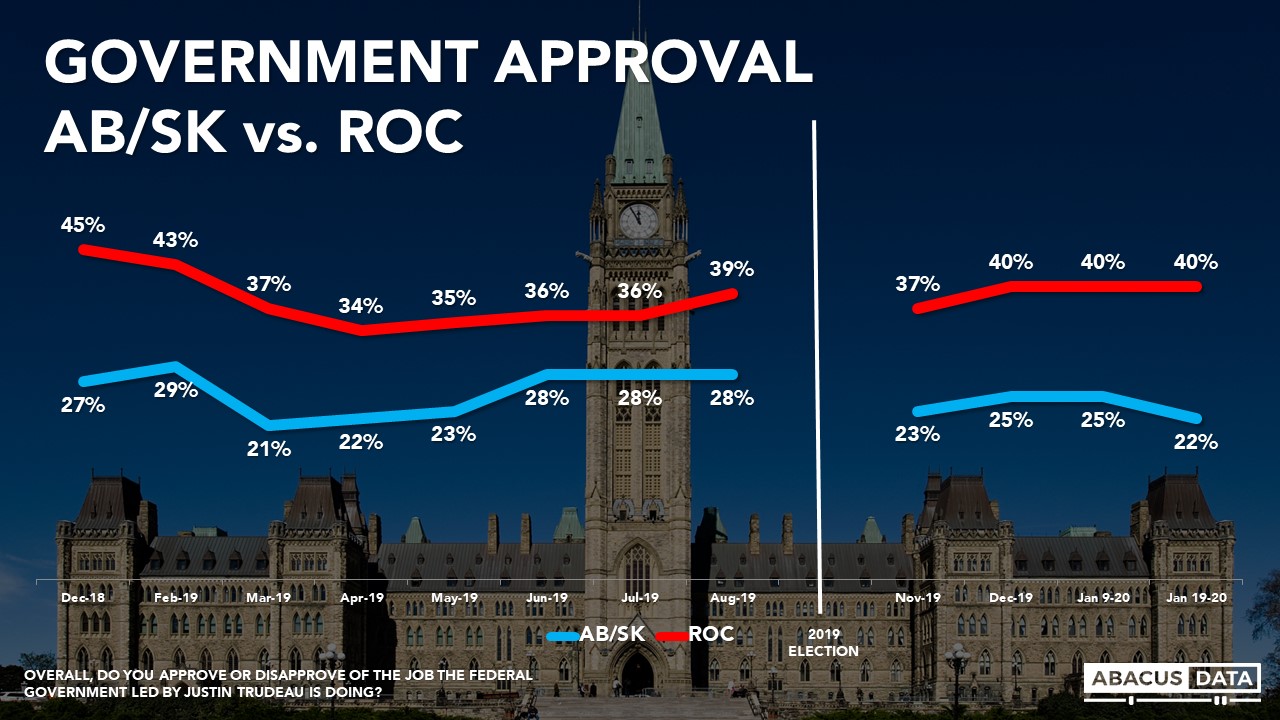 Ratings for the job the Prime Minister is doing show that a clear majority see him doing an acceptable or better job on 10 of 13 items. Strongest positive reactions are for his approach to dealing with the tragedy in Iran, his representation of Canada internationally and his approach to gender issues. Also worth noting is that a two-thirds majority indicate they are happy enough with the NAFTA deal. Weak ratings are for handing of tax dollars, the size of the deficit and the TMX pipeline. 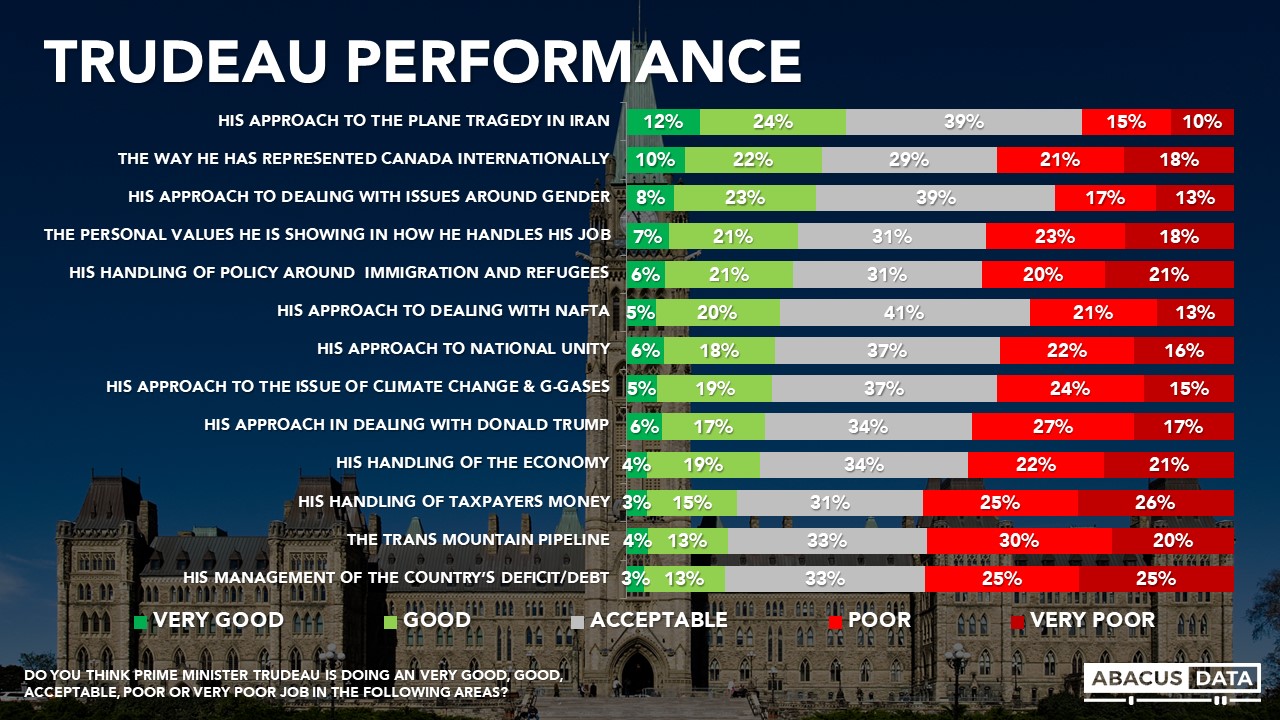 Personal approval of Mr. Trudeau shows 36% positive, 43% negative, continuing a gradual recovery from the -18 rating we saw around the SNC Lavalin issue last winter. In Alberta and Saskatchewan, 20% have a positive impression of the Prime Minister while 63% have a negative view. In the rest of the country, his numbers are almost even, 39% positive and 40% negative.

Back in June 2019, the gap between Alberta/Saskatchewan and the rest of the country was 9-points when it comes to positive impressions of the Prime Minister. Today it is 19-points.

Ratings for NDP leader Jagmeet Singh are 36% positive, 22% negative with positives holding steady from the end of the election and negatives down slightly. 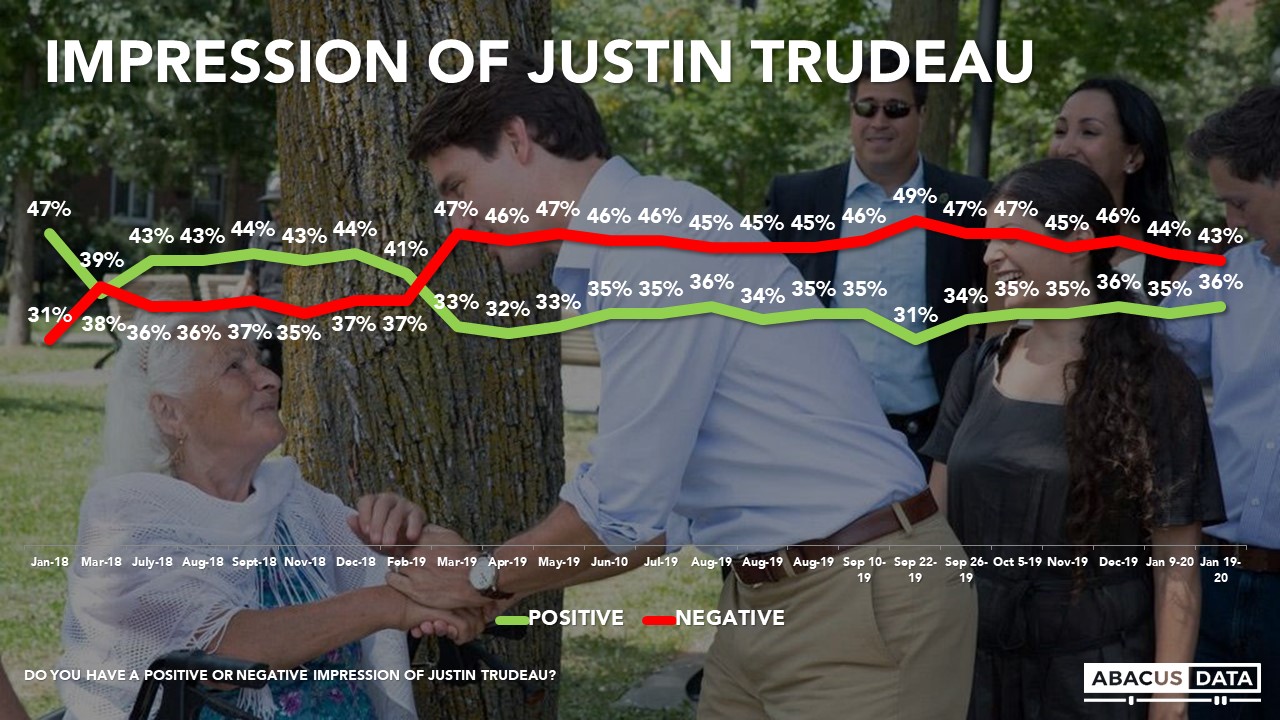 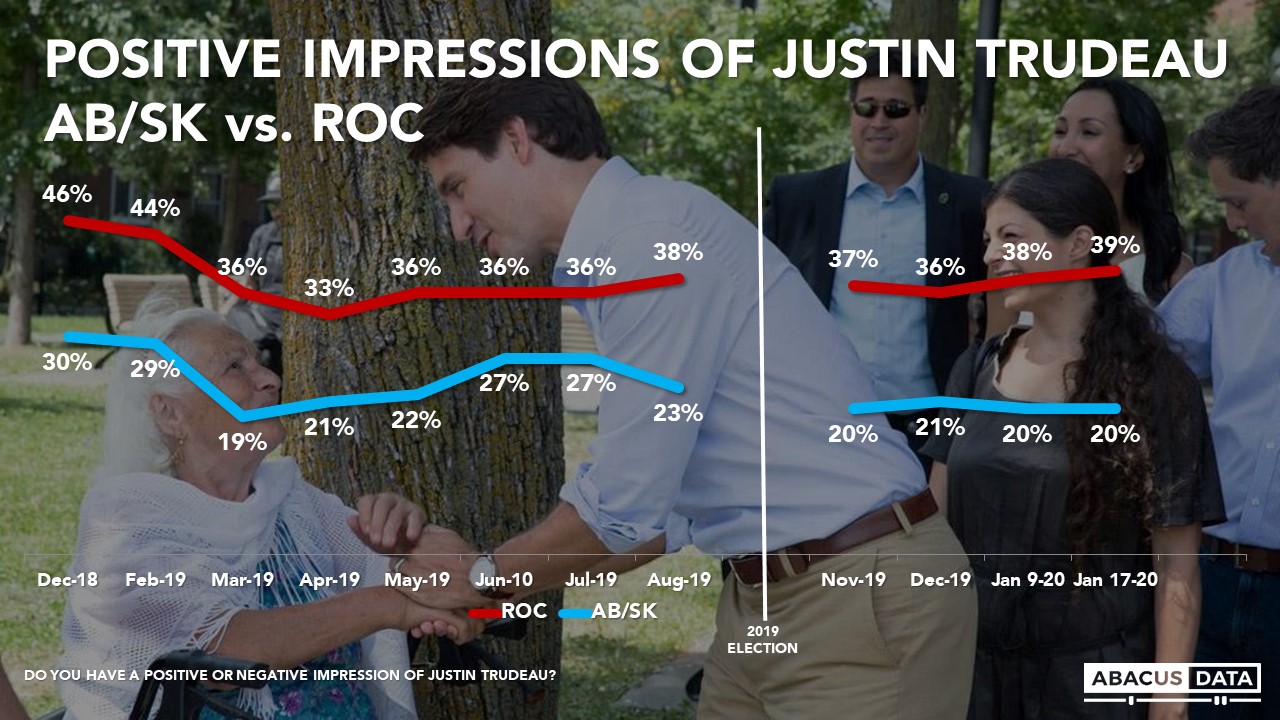 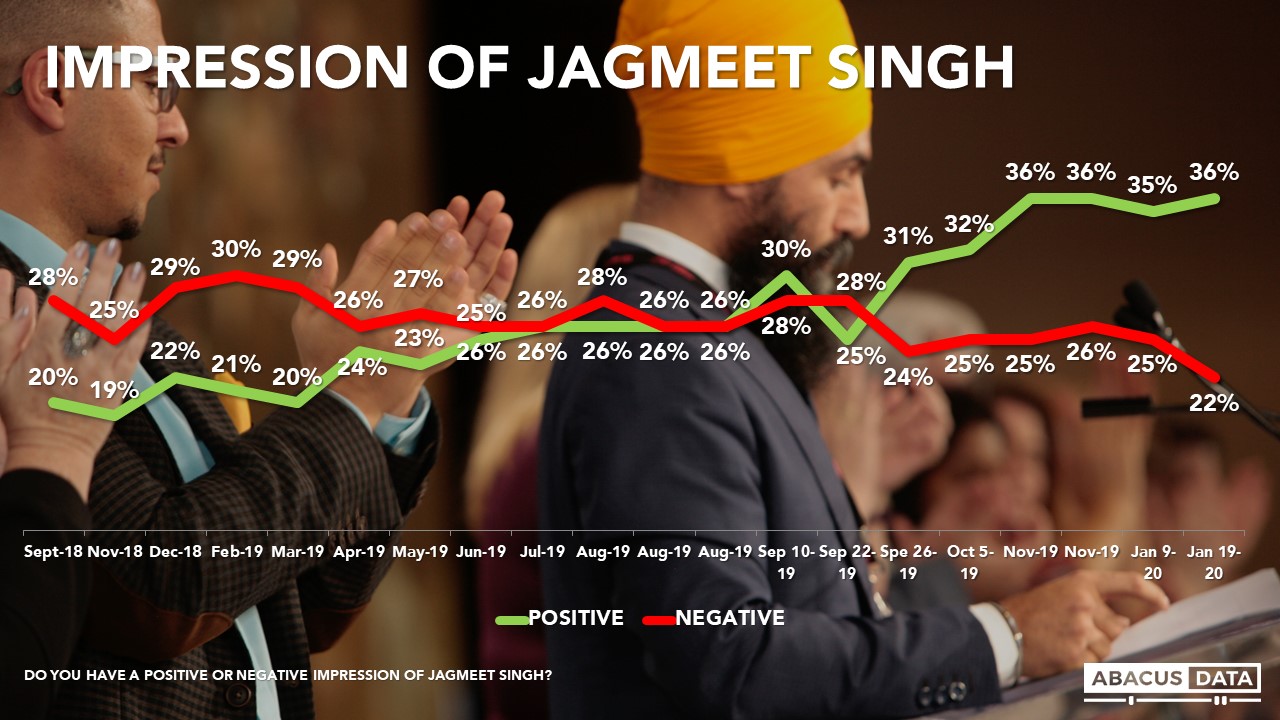 WHAT PEOPLE ARE PAYING ATTENTION TO

We regularly measure what Canadians say they are paying attention to. When this survey was taken, the plane crash in Iran, Australia wildfires, and the US-Iran conflict were garnering the most attention. Almost half say they were also following very or somewhat closely the Trump impeachment hearings. 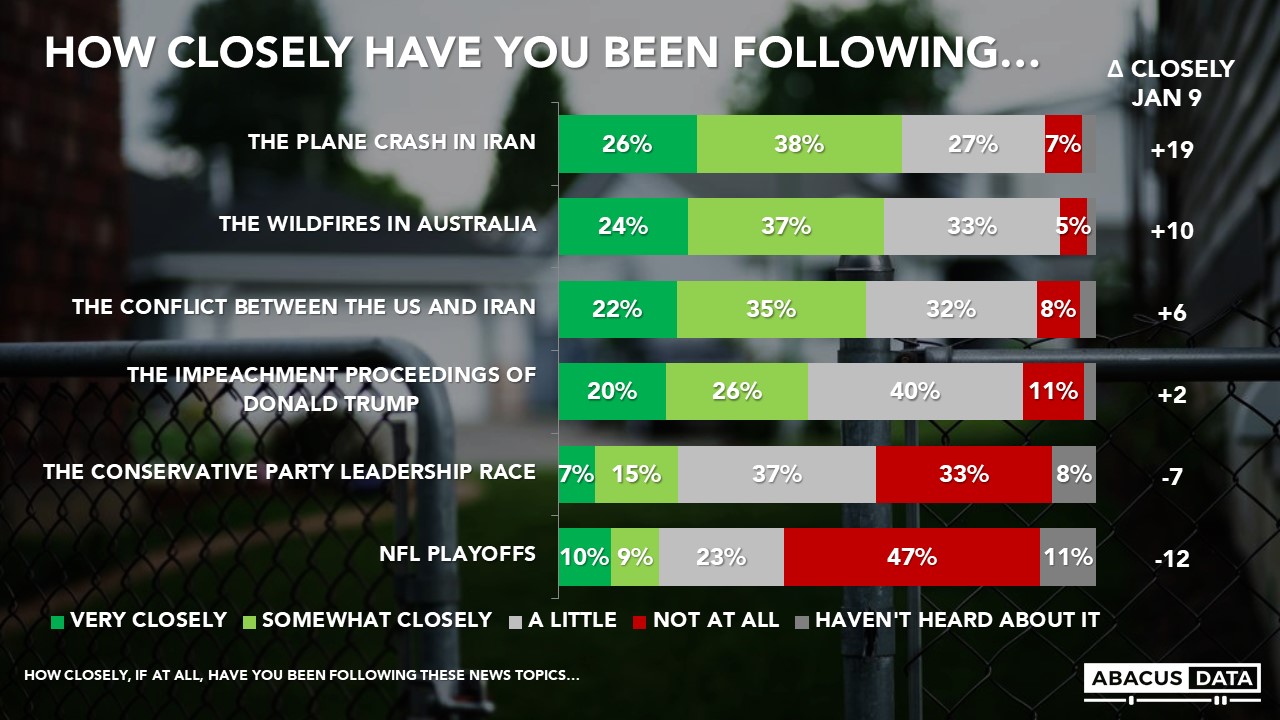 According to Bruce Anderson: “American politics is easily characterized and understood as polarized and entrenched between ardent Democrats and fervent Republicans. Canada has largely avoided such polarization, however, a case can be made that Conservative voters in Alberta and Saskatchewan see the world quite differently from many in the rest of the country.

The Trudeau government found no second honeymoon bounce in our post-election numbers but instead can see in these numbers confirm that a somewhat understated approach to governing is showing positive results in public opinion.

For the Conservatives, the gap among younger voters and the Alberta/Saskatchewan and ABexit issues show the risk that lies ahead – leadership candidates who might play to these divisions may find a positive response within the membership, but they create more challenges for the party in an election that could happen at any time, given this is a minority parliament.

Finally, reactions to the plane crash tragedy also are a reminder of the instinct to unify and show compassion in the face of such terrible situations.”

According to David Coletto: “As the year begins, the Liberals hold a slight lead in a hypothetical ballot. But up against a more or less leaderless opposition Conservatives leaves the ballot somewhat meaningless. Instead, some of the fundamentals continue to show improvement for the government and Prime Minister from the low-points in spring 2019.

The government’s approval is holding steady but the negatives remain lower than they have been since the SNC-Lavalin controversy. Mr. Trudeau’s personal image has improved as well. It’s clear that his response to the tragedy in Iran has been well received and his strength remains how he handles himself and represents the country internationally.” 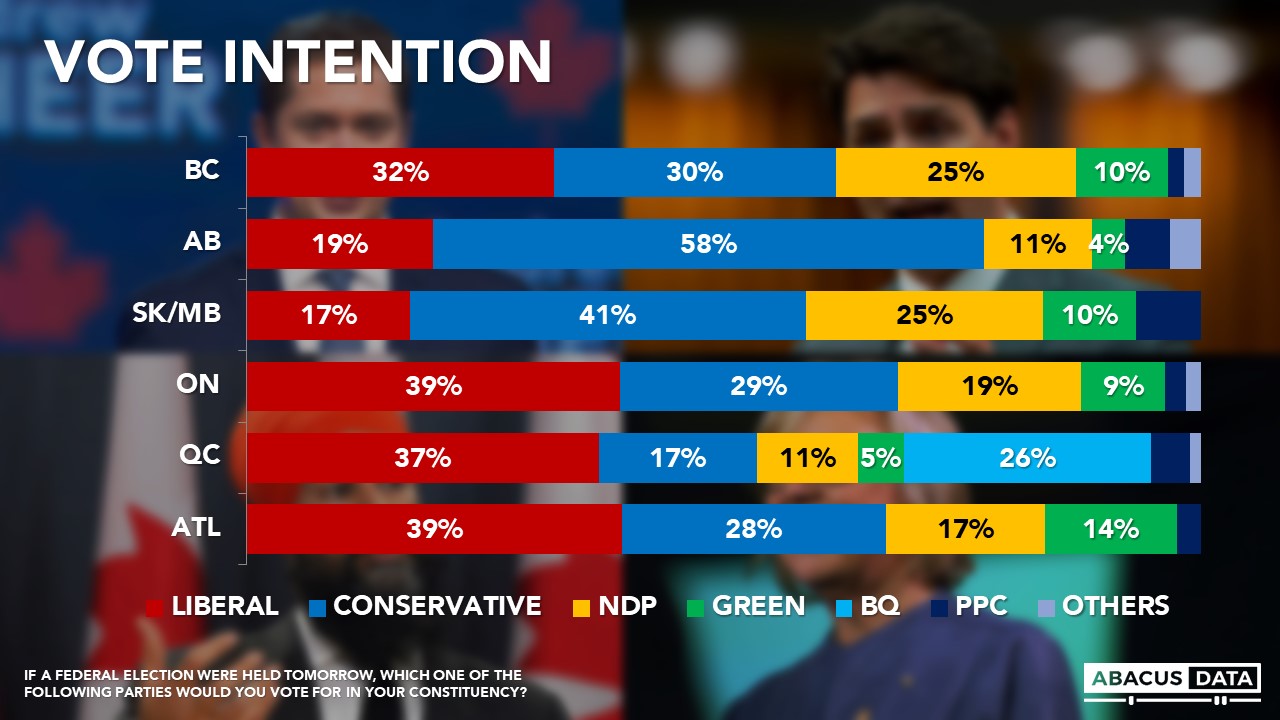 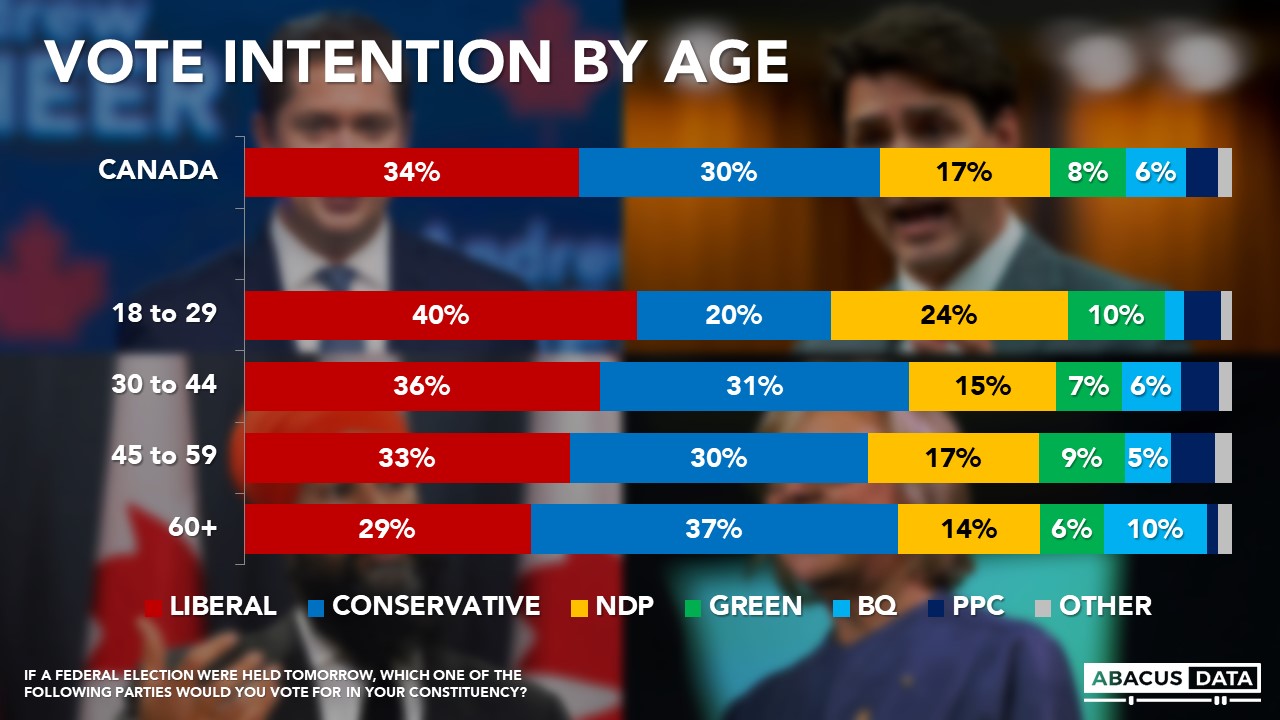 Our survey was conducted online with 1,500 Canadians aged 18 and over from January 16 to 17, 2019. A random sample of panellists was invited to complete the survey from a set of partner panels based on the Lucid exchange platform. These partners are double opt-in survey panels, blended to manage out potential skews in the data from a single source.

The margin of error for a comparable probability-based random sample of the same size is +/- 2.5%, 19 times out of 20. The data were weighted according to census data to ensure that the sample matched Canada’s population according to age, gender, educational attainment, and region. Totals may not add up to 100 due to rounding. 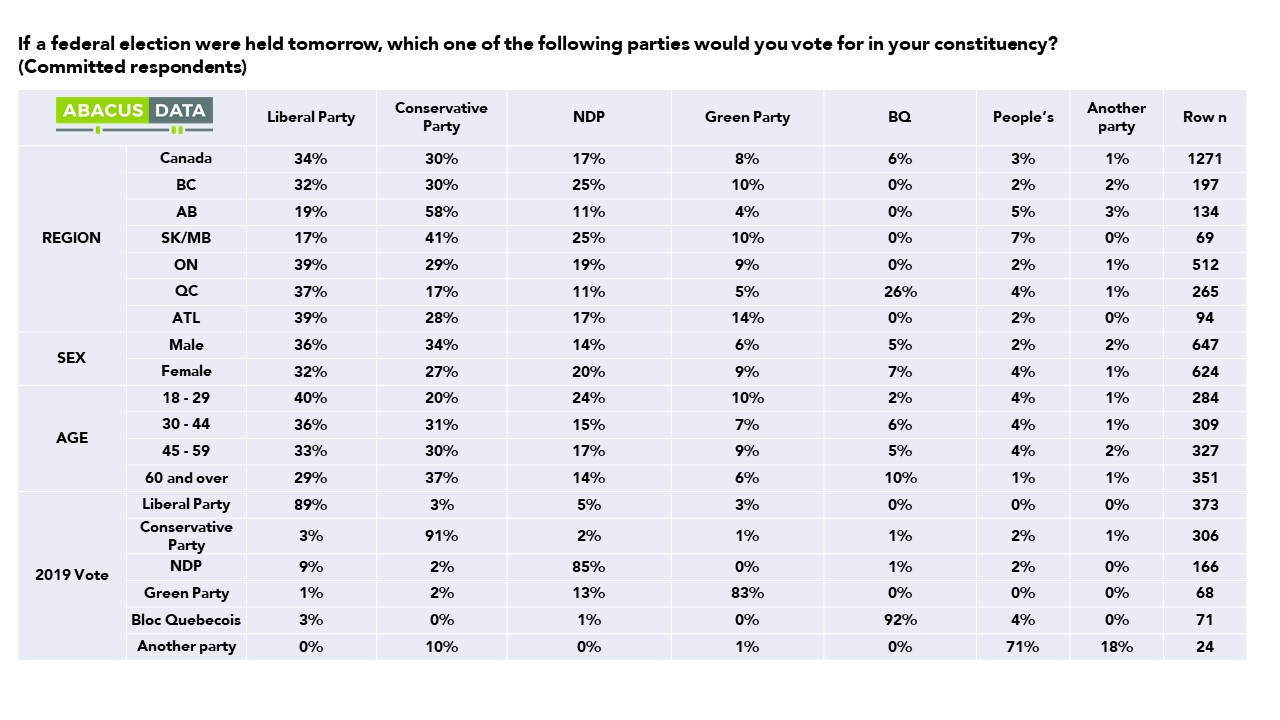 Canadians think their tax system is unfair and support new revenue tools that bring down the deficit...
You vaxxed? Millions are asking each other and relationships might hang in the balance
How Canadians view the federal party leaders
2021 is not 2019: Liberals well ahead as Conservative vote hits a new low
Liberal fortunes strengthen; Conservatives shed 5 points in a month