Last Thursday, Whole Foods Market got into a bit of trouble when  CBC News reported that its team members in Canada were asked not to wear poppies to commemorate Remembrance Day. As a result of the public outcry, by the end of the day on Friday, the company announced it was changing the policy and allowing staff to wear a poppy.

The backlash to the news was quick and broad. Prime Minister Trudeau described the decision as a “silly mistake” and Ontario Premier Doug Ford even announced that he would make it illegal for businesses to prohibit team members from wearing poppies.

Given this news, we wanted to assess how quickly news spread and the potential impact on Whole Foods’ reputation. Our team moved quickly and asked two questions on our weekly national omnibus survey.

We interviewed over 1,600 Canadian adults and used an experimental questionnaire design. Half the sample was told about the Whole Food Market’s decision but not that they had reversed the decision on Friday. The other half was told of the decision and the reversal. 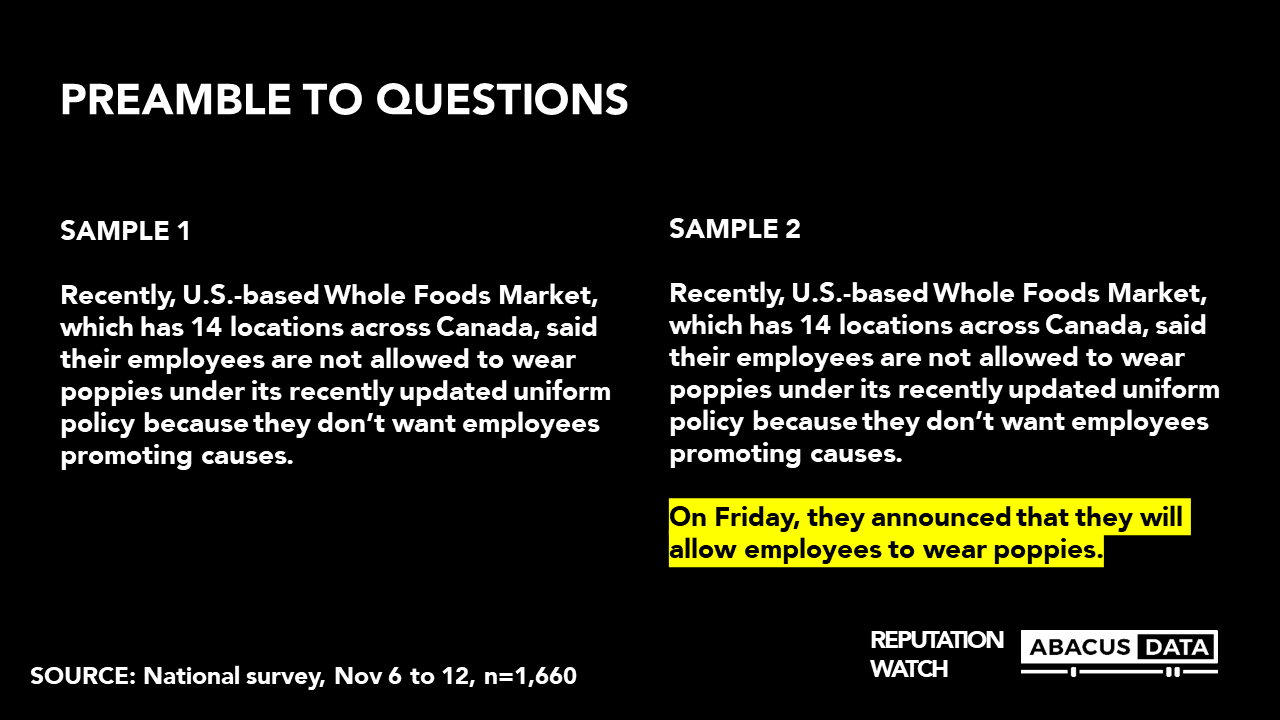 Here’s a summary of what we found.

WITHIN A WEEK, 7 IN 10 CANADIANS WERE AWARE OF THE INCIDENT

Attention to the issue was higher than other issues we have measured in the past.  Seven in ten (71%) were aware of the incident with almost half saying they are following the issue closely or have seen at least a few things about it. 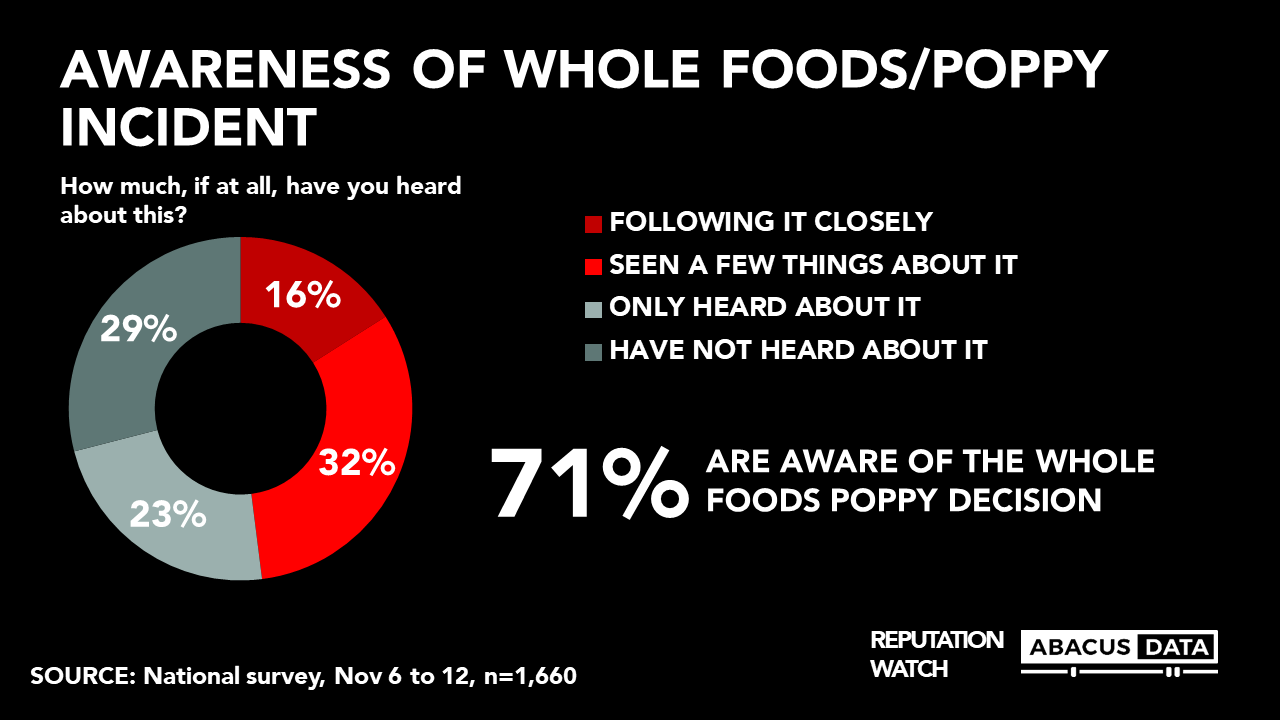 EVEN WITH THE REVERSAL, DAMAGE TO WHOLE FOOD’S REPUTATION WAS DONE. ALMOST HALF SAID THEY WOULD BE LESS LIKELY TO SHOP AT WHOLE FOODS MARKET. 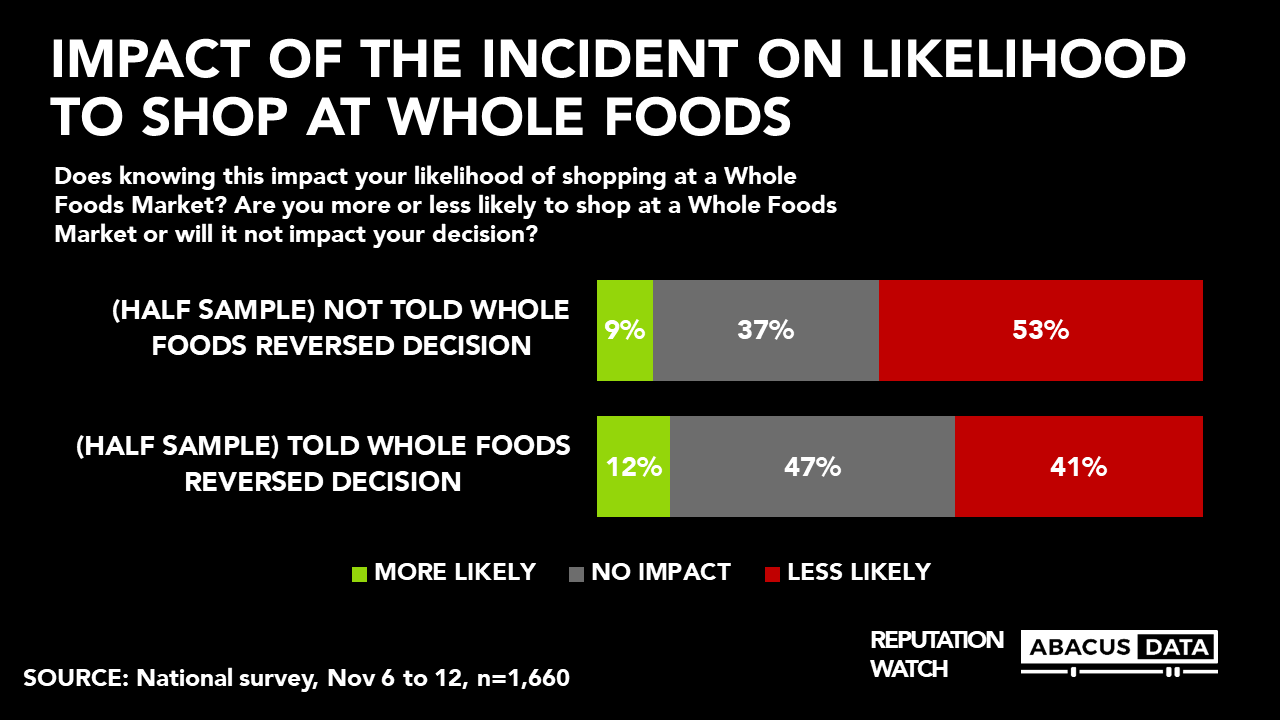 A few interesting findings from the crosstabs:

Those following the story closest were most likely to say they are less likely to shop at Whole Foods Market as a result. 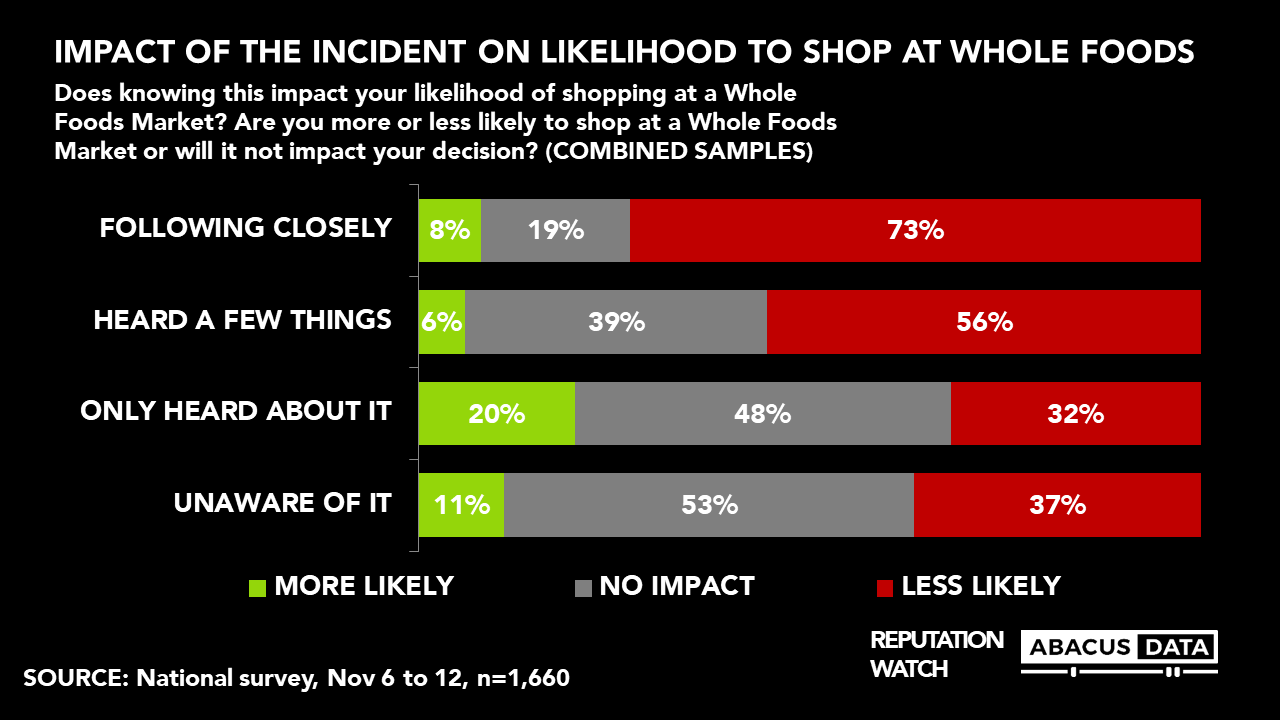 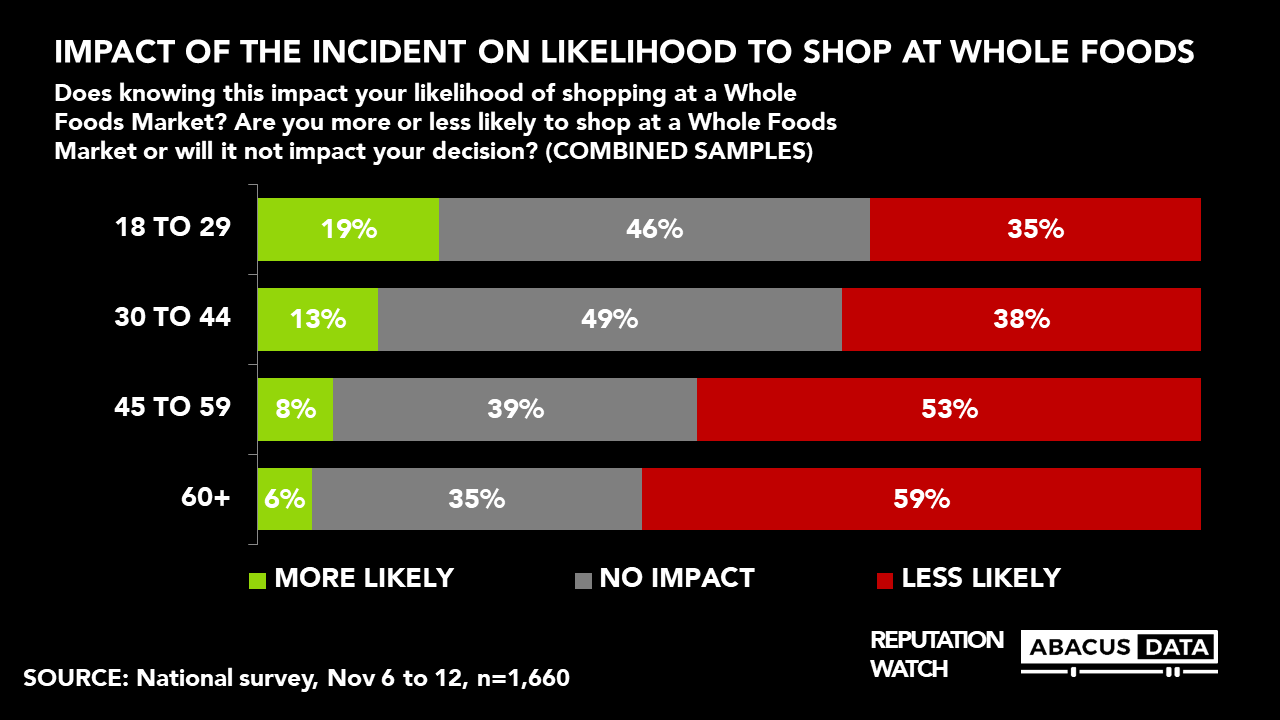 The impact was consistent across the political spectrum. Half or more of Liberal, NDP, and Conservative voters said they would be less likely to shop at Whole Foods Market. 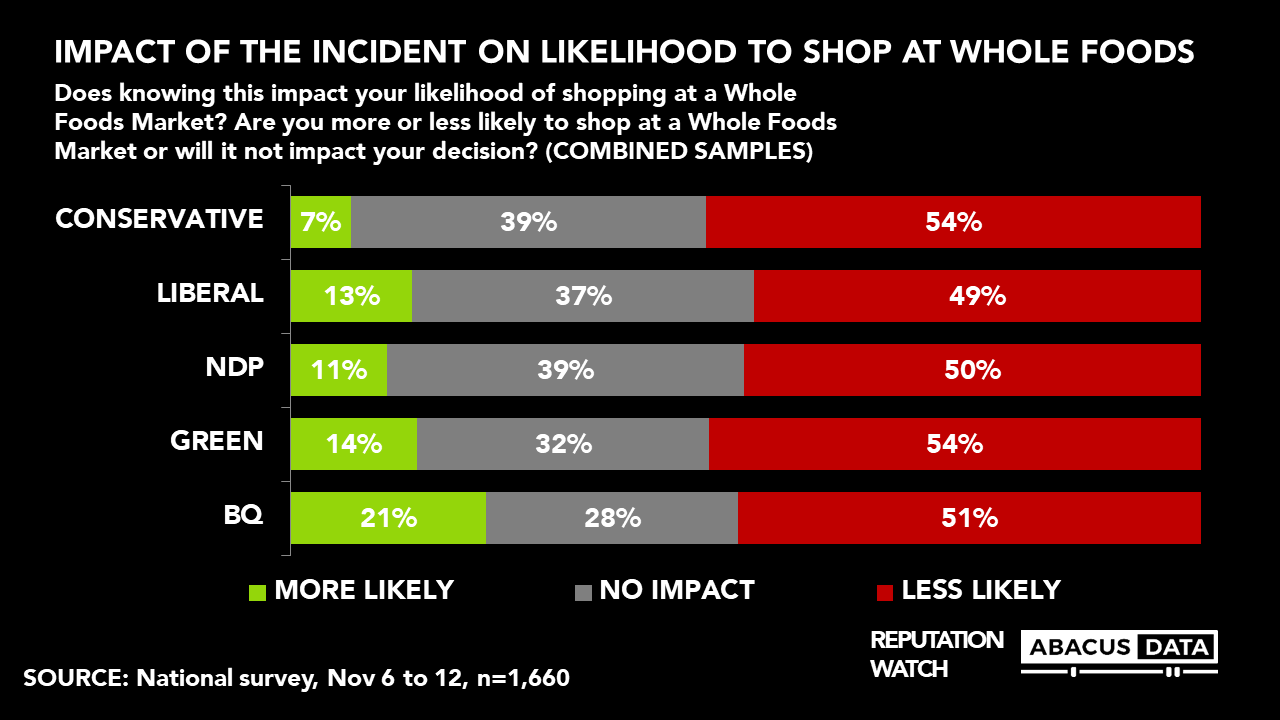 Within a few days, 7 in 10 Canadians were aware of the decision by Whole Foods Market to not allow their staff to wear poppies. The reaction to the decision was quick and crossed the political spectrum. Almost half of Canadians said they would be less likely to shop at the retailer as a result.

a. Information can move so quickly today.

b. Remembrance Day and Canadian veterans are revered in Canada and the high esteem crosses the political spectrum.

c. Even when you change course, the impact could be lasting.

e. Local context matters. Multi-national companies need to know how local populations might react. This is where research and intelligence can support better decisions.

We meet leaders all the time who aren’t sure which choice is the right one. They struggle to achieve their objectives.

Our work helps respond to challenges and take advantage of opportunities every day.

Testing messages to decide which one will captivate and motivate the right audiences through creative qualitative research.

Assessing the impact of big events on an organization or individual’s image and brand through reputation research.

Exploring how audiences will react to new product or service offerings through surveys, focus groups, and one-on-one interviews.

SCHEDULE A MEETING TODAY AND LET’S GET STARTED

The survey was conducted with 1,660 residents of Canada aged 18 and older from November 6 to 12, 2020. A random sample of panelists was invited to complete the survey from a set of partner panels based on the Lucid exchange platform. These partners are typically double opt-in survey panels, blended to manage out potential skews in the data from a single source.