As part of our national survey completed this morning, we asked some questions exclusively of the 1007 respondents living in Ontario. Note, this survey was completed entirely after Premier Ford’s press conference on Friday afternoon.

Here’s a quick summary of what we found:

In a week, Premier Ford’s negatives have increased by 9-points. He is more unpopular than he’s been at any point since start the pandemic.

Overall, 46% of Ontarians have a negative view of the Premier, up 9-points since last week while 28% have a positive impression (down 11 since last week). 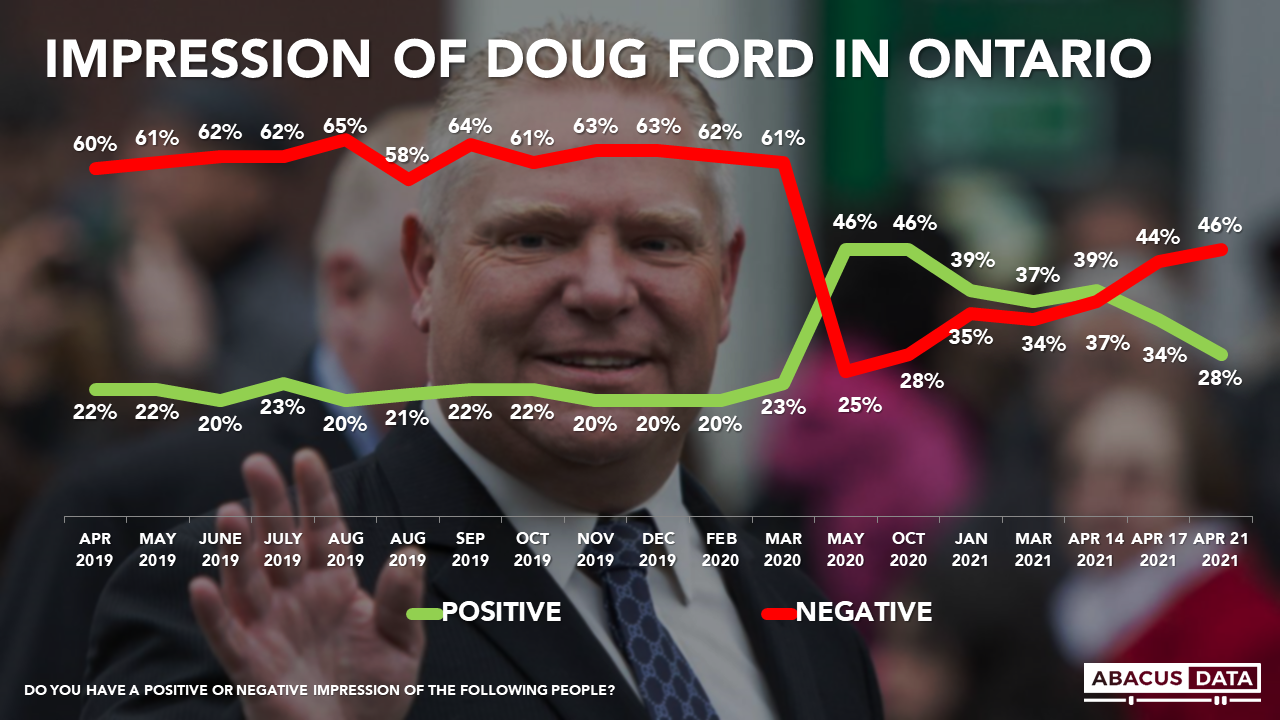 Mr. Ford is viewed negatively now by 22% of those who voted PC in 2018 (that’s up 9 points in a week). A majority of Liberal, NDP, and half of Green voters have a negative view of the Premier. 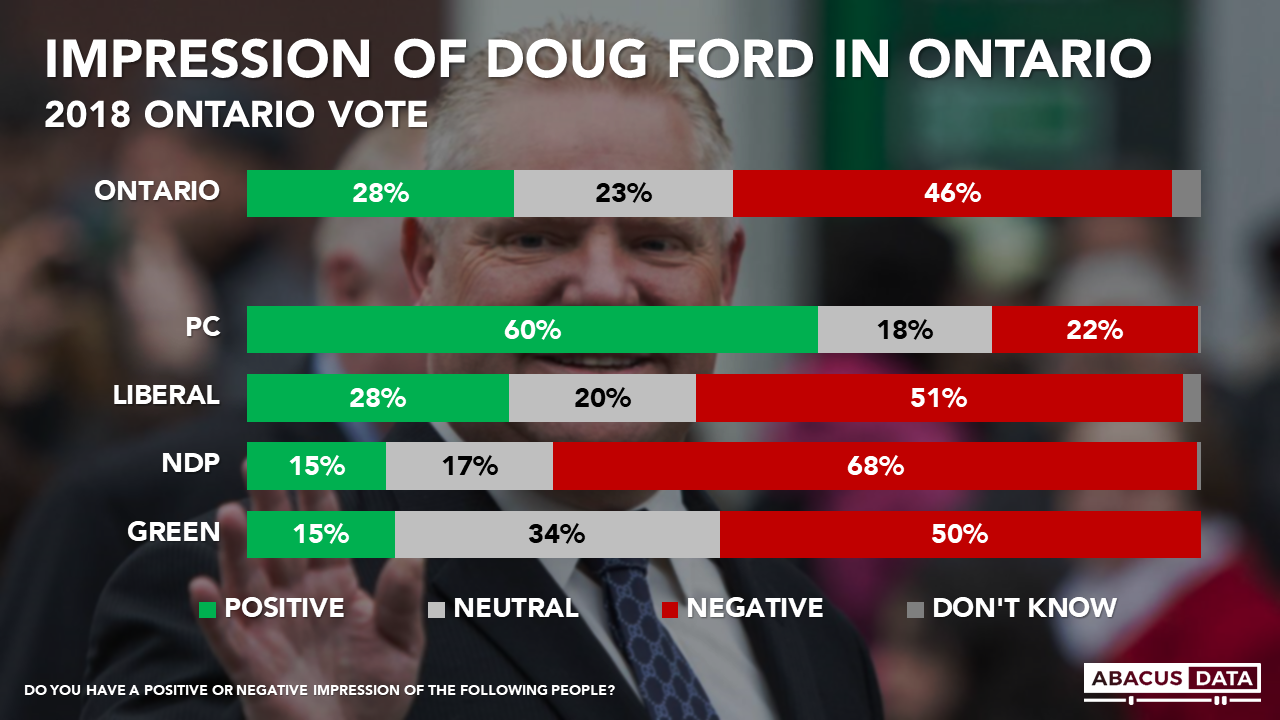 He’s also angered those on the left side of the spectrum, 78% of whom have a negative view (up 33-points!). 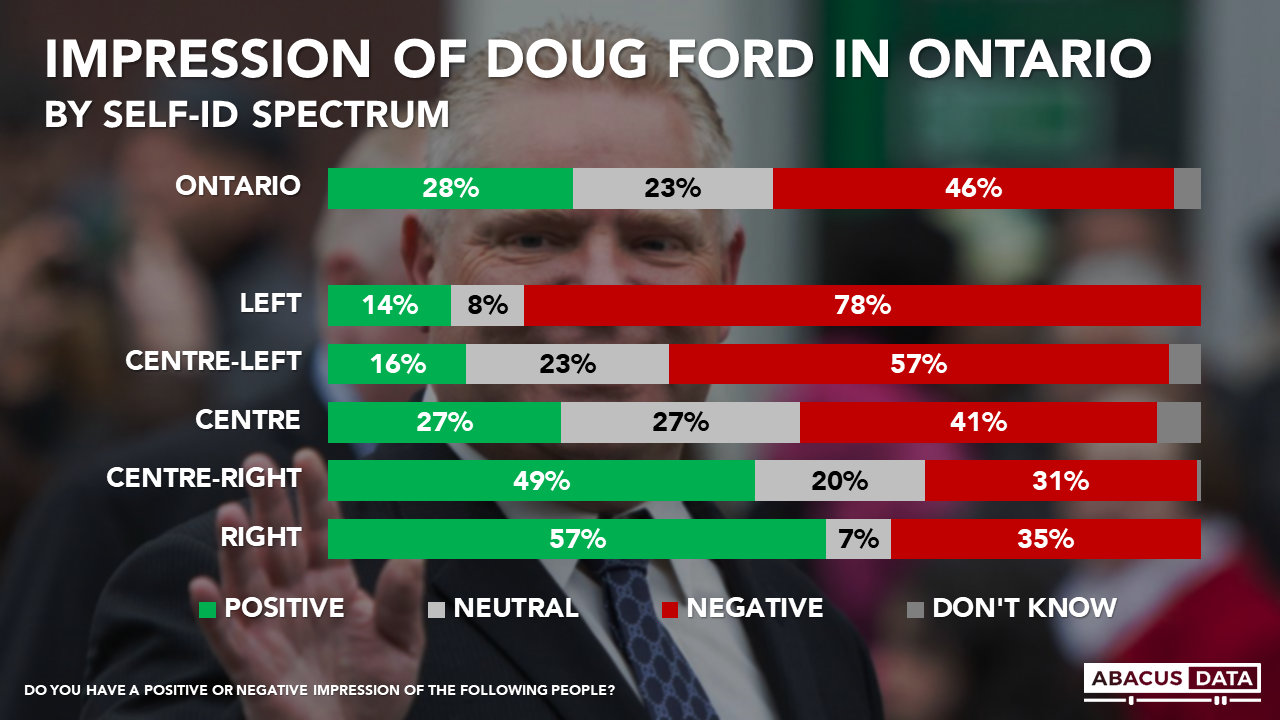 In short, his announcement on Friday had the effect of upsetting voters on all sides of the spectrum, including his base on the political right of the province.

Despite the drop in Mr. Ford’s approval, vote intentions have not changed much. The Ontario Liberals and PCs remain statistically tied with the NDP in third.

If an election were held at the time of the survey, the Ontario Liberals would get 35%, the PCs 34%, the NDP 23% and the Greens 5%. There is almost no change from our previous survey that was completed on April 14. 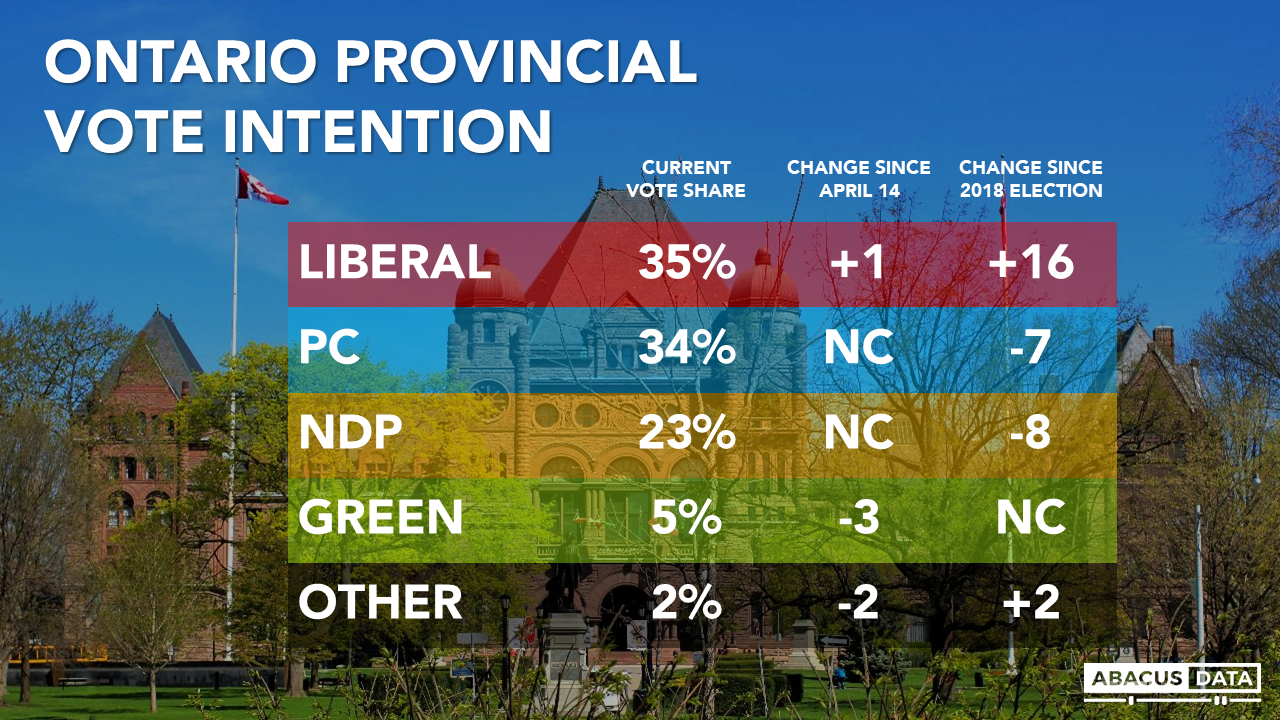 Regionally, the Liberals have a slight lead in Toronto, while the PCs and Liberals are statistically tied in all other regions except for eastern Ontario where the PCs have the lead. 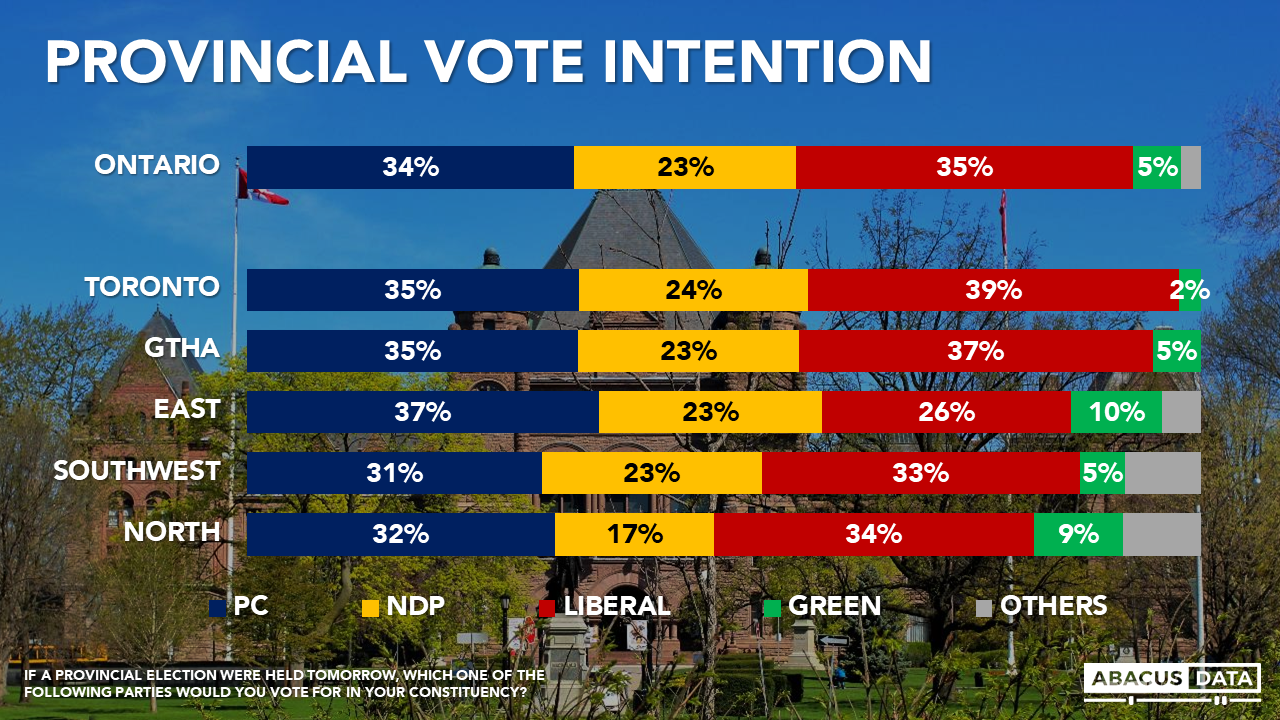 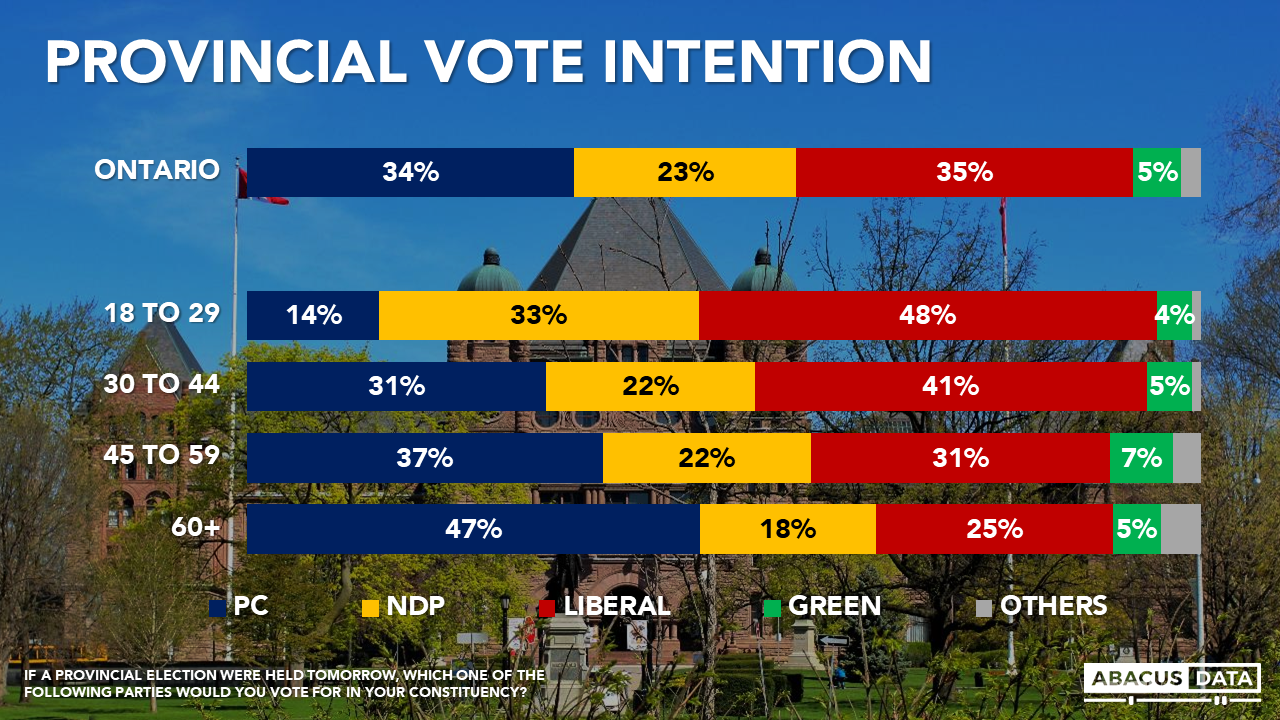 In less than a week, the Premier’s image has soured substantially. Almost half the province has a negative view of him, the highest since the start of the pandemic. He’s upset not just his usual opponents and detractors, but also a large part of his base.

So far, this hasn’t translated into a decline in vote share for the PCs. But they remain 7 points back from their share of the vote in the previous election while the Liberals have rebounded into a virtual tie for the leader. If anything, the increased anger among centre-left voters could encourage consolidation around one of the alternatives. If that happens, the PCs and Mr. Ford will have a very hard time being re-elected.

We will continue to monitor the situation in Ontario.

Interested in an exclusive polling brief after the federal budget? Find out more

The survey was conducted with 1,007 Ontario residents from April 16 to 21, 2021. A random sample of panelists were invited to complete the survey from a set of partner panels based on the Lucid exchange platform. These partners are typically double opt-in survey panels, blended to manage out potential skews in the data from a single source.

The return to normal travel is delayed, but not cancelled.
2.4 million are vaccine “maybes”, another 2.4 million say “no”. More than 5 million doubt the second...
How Canadians view the federal party leaders
Introducing Carson Miles - an Ottawa-based road cyclist being supported by Abacus Data
2021 is not 2019: Liberals well ahead as Conservative vote hits a new low