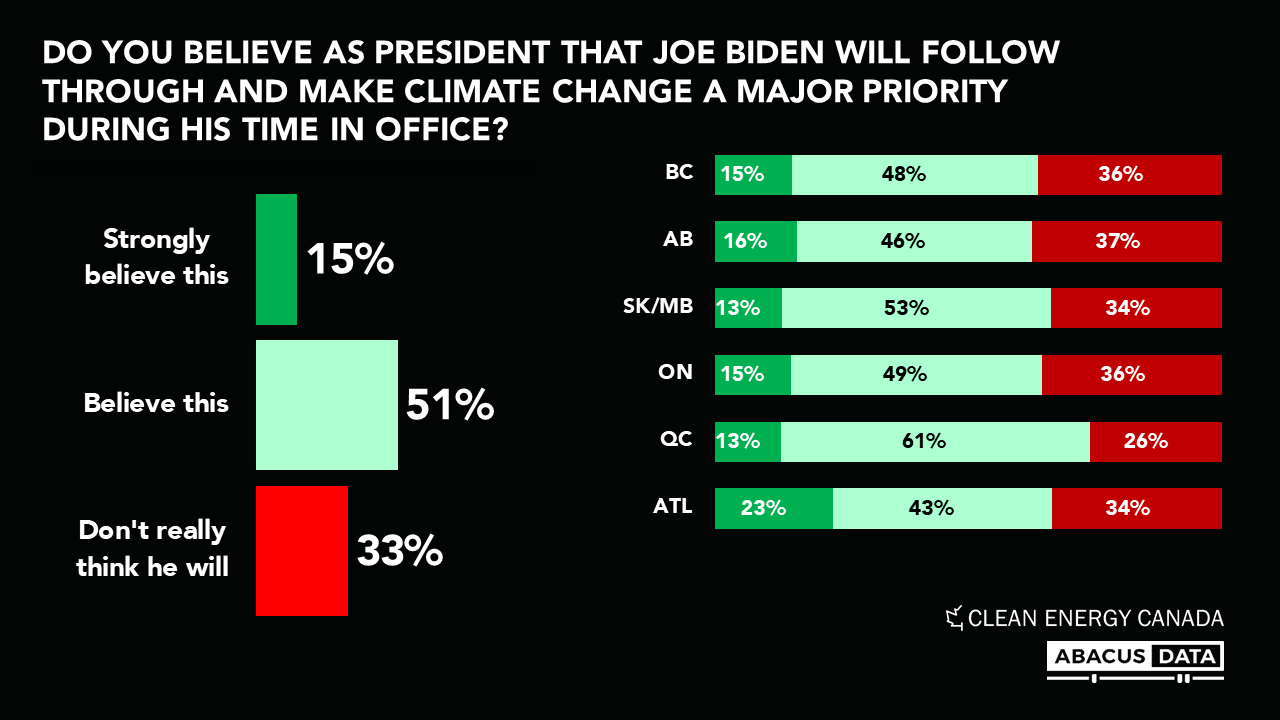 The consensus that America can reduce emissions without harming its economy is broad, includes all regions of the country, and cuts across all generations. While the debate in Canada has had strong regional and political cleavages in the past, these seem more muted now.

• Only 30% of Albertans believe a climate push will hurt America’s economy, while an equal number think it will add strength (31%) and the rest think the economic impact will be neutral.

• While one in three Conservative (33%) voters think a Biden climate push will weaken America’s economy, a quarter (24%) think America will be stronger as a result, and 42% see no significant impact. Supporters of other parties are considerably more likely to say cutting emissions will strengthen America’s economy. 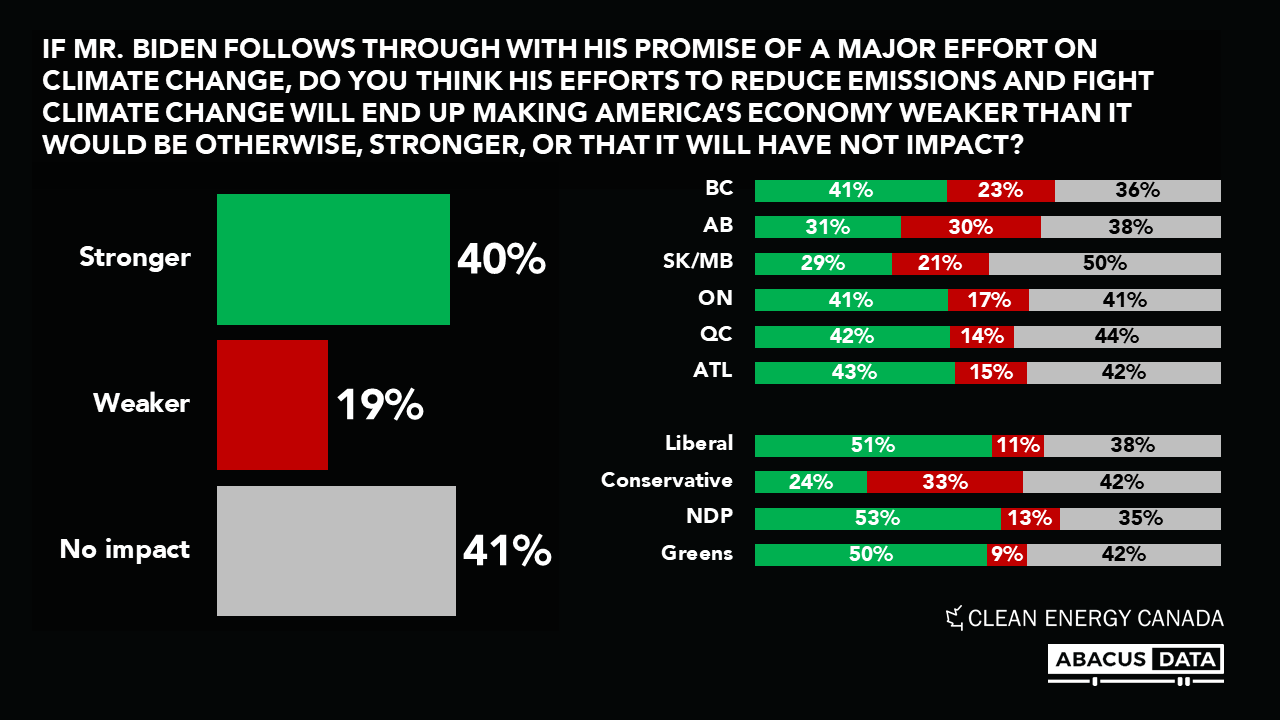 The question of how Canadian policy should tack based on Mr. Biden’s anticipated approach is topical right now. When told of Biden’s stated intent to invest very significantly in clean energy projects, respondents are clearly of the view that Canada should follow the same path.

Three out of four (77%) to want Canada “to move our economy at a similar pace towards clean energy so we don’t become uncompetitive with the US economy” rather than to assume America’s economy will be weakened by a shift to cleaner energy and that we should move more slowly to gain an economic advantage (23%).

This preference to move in step with America is the majority view in every part of the country, including Alberta (65%). It is also the view of a majority of supporters of all political parties, including 59% of Conservatives. 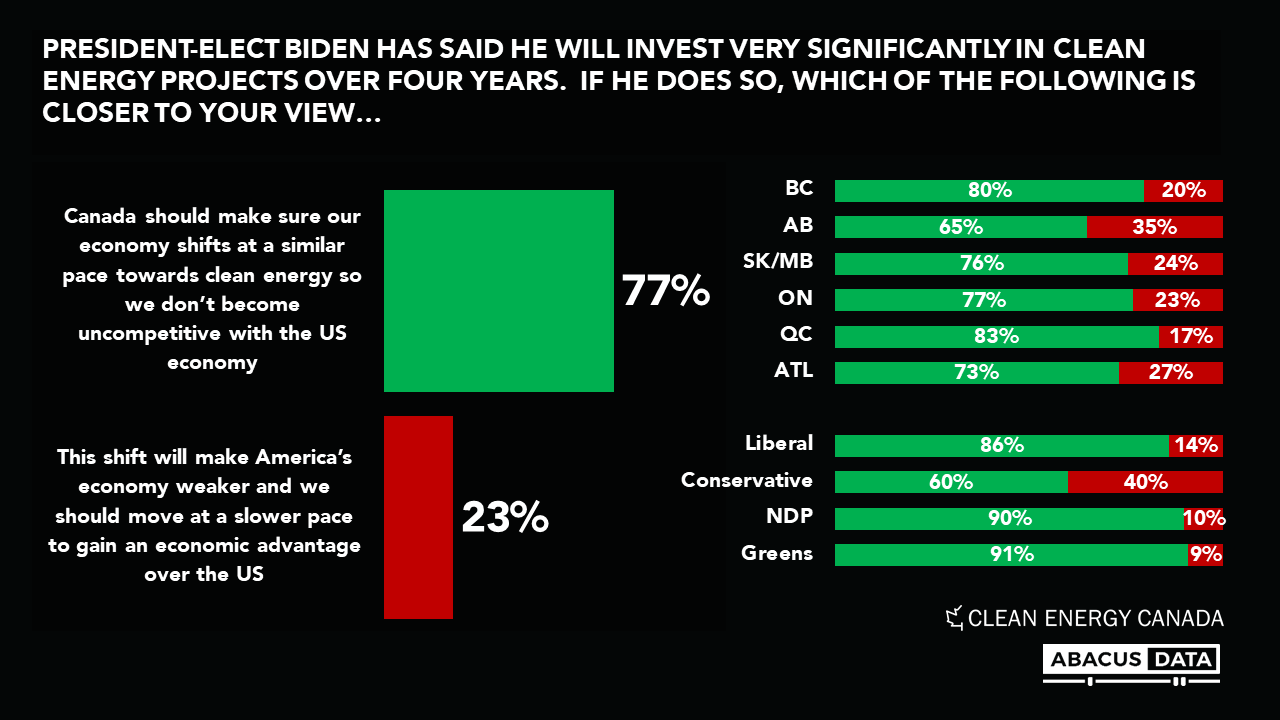 According to Bruce Anderson, Chairman of Abacus Data: “For most Canadians, who welcomed the election of Joe Biden, his climate agenda will be seen as a positive for the future of the planet.  But what is most interesting in these numbers is the fact that public opinion has crossed a tipping point – people now believe that an economy which shifts it’s an approach towards cleaner energy won’t be adding costs and losing competitiveness – they are more likely to believe that it will have a positive economic effect.

The second major finding here is that Canadians, including most Albertans and most Conservatives, believe Canada must shift in this direction in order to remain competitive with the US and not be left behind.  For politicians and policymakers we are now much more squarely in a world where people want to discuss the how, not the whether, of an energy transition and the fight against climate change.”

According to Merran Smith, Executive Director of Clean Energy Canada: “Canadians don’t want to be left behind, which means keeping tabs on our friends around the world. With a Biden presidency kicking off the new year and game-changing clean stimulus plans from countries like Germany, the U.K., and South Korea, it’s clear that Canada must work to keep up in what might be the world’s most competitive—and economically critical—race. It’s also clear that Canadians understand what’s happening globally, and that few wish to place their bets on old ways of doing things.”

The survey was conducted with 1,419 Canadian adults from November 26 to December 1, 2020. A random sample of panellists was invited to complete the survey from a set of partner panels based on the Lucid exchange platform. These partners are typically double opt-in survey panels, blended to manage out potential skews in the data from a single source.