This release was prepared by Clean Energy Canada.  Details and additional information on the study can also be found here.

Survey also shows most Canadians support a transition from fossil fuel reliance as quickly as possible, including half in Alberta

New public opinion research found that roughly 20 million Canadian adults (69 per cent) heard something about the recent First Ministers’ Meeting on climate—including 9 million who heard either a lot or a fair bit about it. Among those who were aware of the meeting, which resulted in the adoption of a new national plan to tackle climate change and spur clean energy, reactions to the outcome were broadly positive, with little evidence of anxiety. For example: 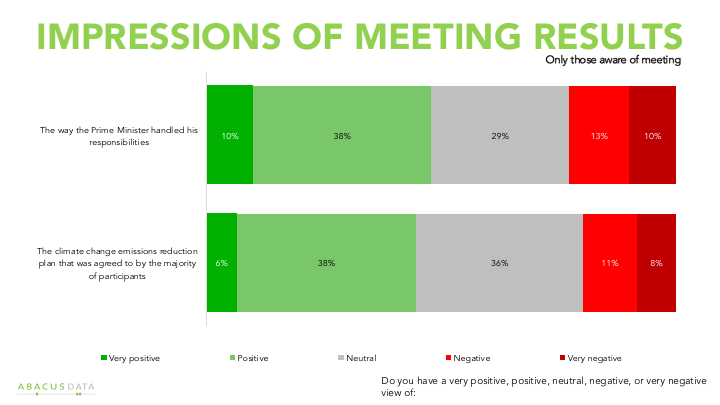 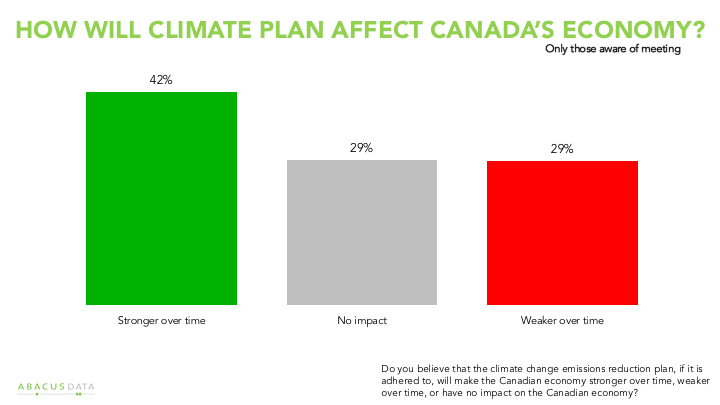 These results come from a survey of 1,848 Canadians conducted December 12 to 14, 2016, by Abacus Data at the request of Clean Energy Canada, measuring Canadians’ views of climate and clean energy policy issues, including the new Pan-Canadian Framework on Clean Growth and Climate Change.

Saskatchewan Premier Brad Wall did not agree to the new climate framework, and said the likely direction of U.S. climate and energy policy under president-elect Donald Trump means we need to be very cautious about adopting climate policies in Canada.

However, only 17 per cent of Canadians think Canada should stick with fossil fuels for the long term in light of Mr. Trump’s energy agenda. Many more (49 per cent) said Mr. Trump’s pro-fossil fuel stance made them more inclined to want Canada shift towards cleaner energy. 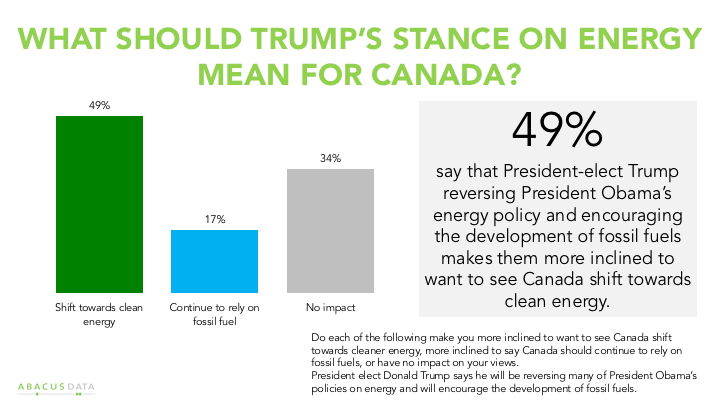 Support for a transition away from fossil fuels

The survey found that 70 per cent of Canadians want the country to “shift its energy use as quickly as possible to cleaner, lower-carbon sources of energy and away from fossil fuels.” Just 30 per cent said they felt it was “better for Canada to stick with mostly fossil fuel energy for a long time to come.”

In every region but Alberta, a majority favours a transition from fossil fuels. In Alberta, opinion is evenly divided. The overwhelming majority (82 per cent) of Canadians under 35 favour a shift as quickly as possible. 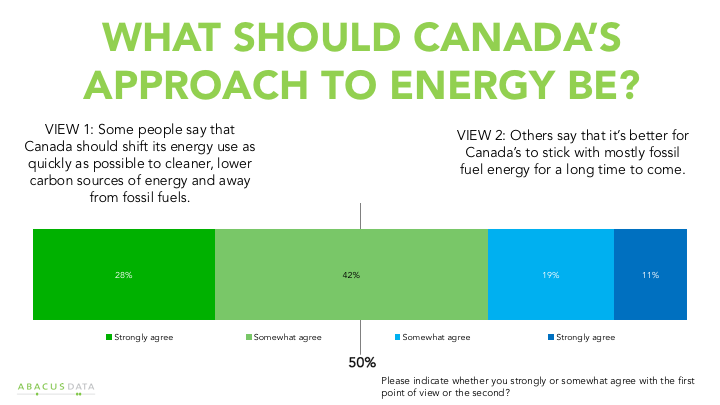 To deliver on the new national climate plan, the next federal budget will need to include funding for initiatives to reduce carbon pollution. Our survey shows that a large majority of Canadians support or would accept allocating funding in the 2017 federal budget to a range of clean energy priorities, including:

Support for these potential budget measures cross all regions of the country, age groups, and partisan supporters. 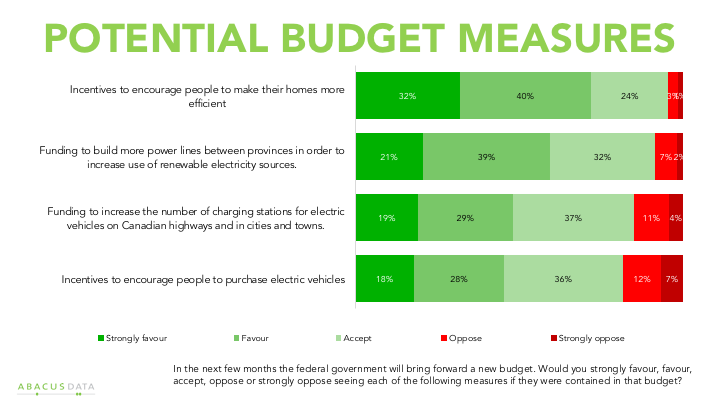 For further analysis of these results, see the media backgrounder.

“The national climate plan negotiations were tense at times, but Canadians are largely happy with the results. Most Canadians believe that we can build a stronger economy by taking action to cut carbon pollution—and they see it as one of the prime minister’s jobs to deliver that clean growth by investing in clean energy.”

“Canadians support a shift in our energy use from fossil fuels to cleaner energy as quickly as possible. And the election of Donald Trump in the U.S. hasn’t dented that support—if anything, this survey suggests that the new U.S. leader’s position actually makes Canadians more inclined to support clean energy here at home.”

“Canadians broadly believe in shifting towards cleaner sources of energy, because they are convinced doing so will benefit the planet, and are unconvinced by the argument that such a transition would gravely damage the economy.

“Assembling a workable public consensus on energy and climate change is the most challenging agenda item in Canadian politics today. These numbers reveal that while no government could please everyone, especially where economic stakes differ and emotions run high, the Trudeau government has laid out a path towards a lower-carbon economy that has alienated few and found acceptance by a large majority.”