If an election were held right now, the Liberal Party (36%) lead nationally – five-point ahead of the Conservatives (31%) – but Liberal support has slid four points since our last measurement at the end of June. 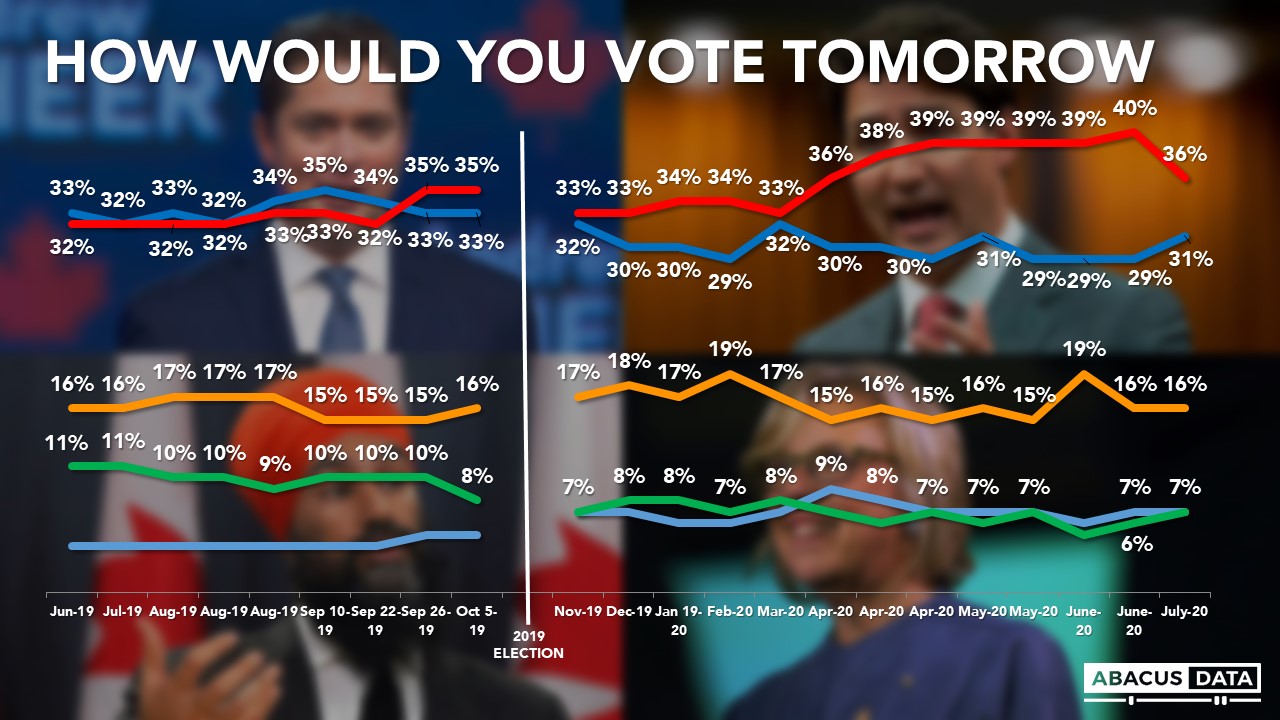 The Liberals lead has shrunk to 7-points in Ontario, 4-points over the BQ in Quebec, and the Liberals are tied with the NDP in BC, with the Conservatives trailing in third. 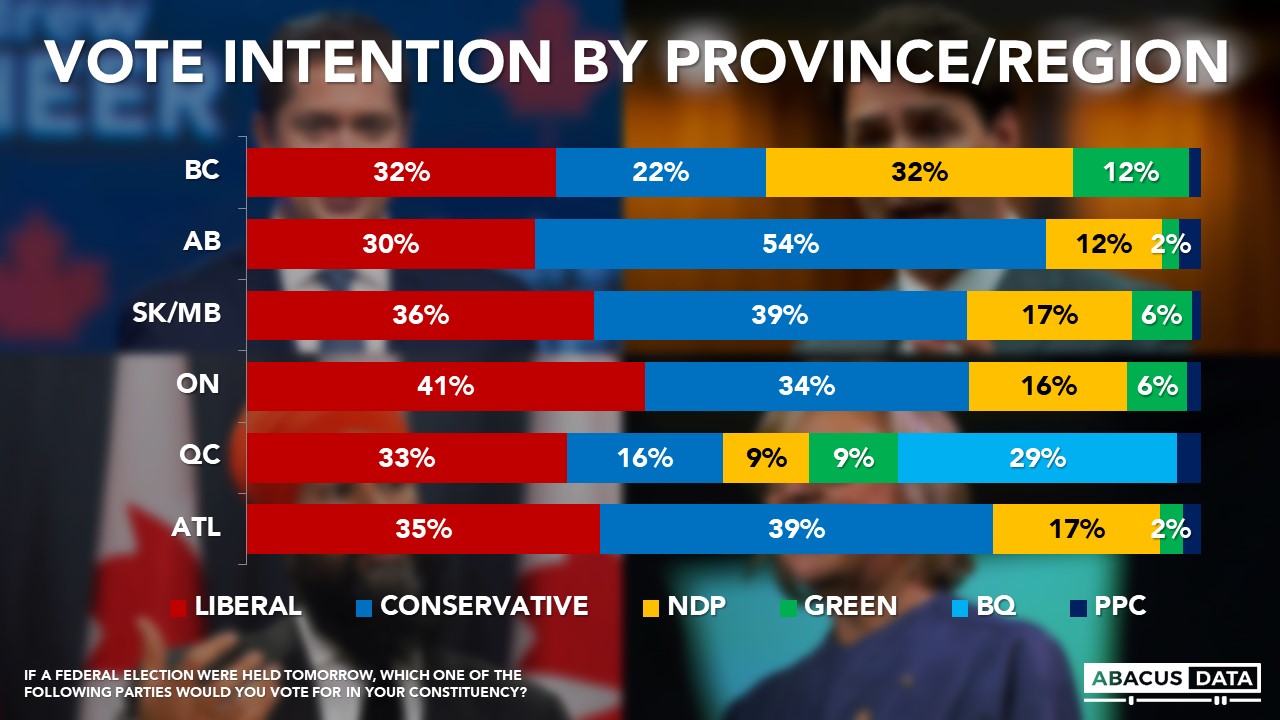 Public impressions of the Prime Minister have also taken a hit, dropping 5-points over the past month. Today 42% have a positive view of Mr. Trudeau and 36% say their feeling is negative. On a regional basis, Mr. Trudeau is net +6 nationally (42% positive, 36% negative), +9 in BC, +9 in Ontario, +6 in Quebec and +14 in Atlantic Canada. 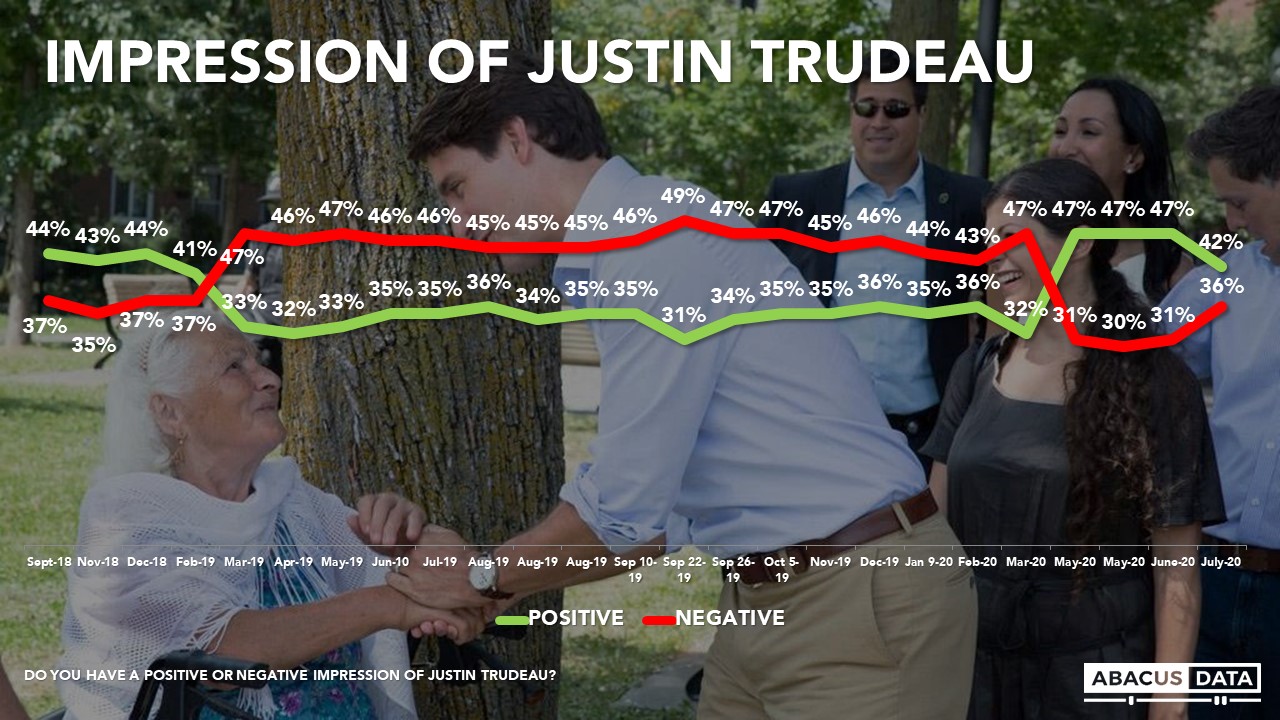 By a 14-point margin, more people approve of the federal government’s performance today than disapprove (48% approve, 34% disapprove), although approval is down 10-points over the past two months and 4-points since June. Approval remains above 50% in BC, Ontario and Atlantic Canada but has sagged below in Quebec and the Prairies. In Quebec, approval of the federal government is down 12-points, to 40%. 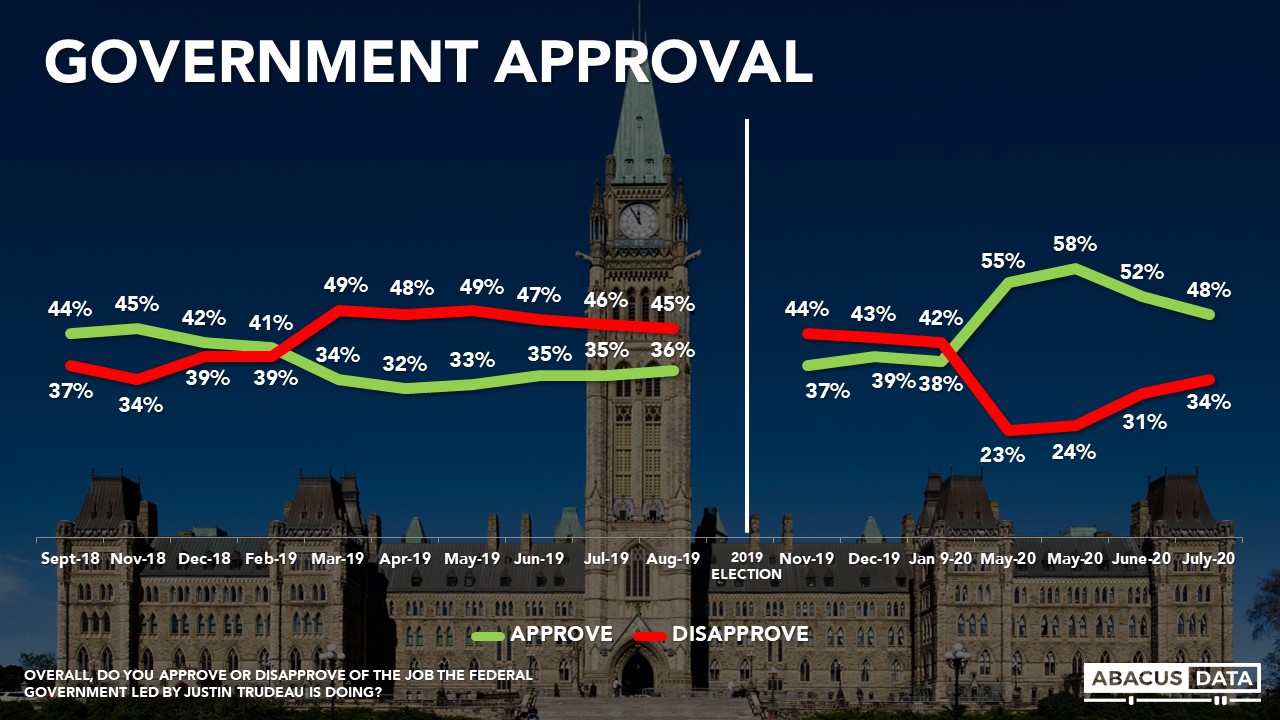 THE WE CHARITY CONTROVERSY 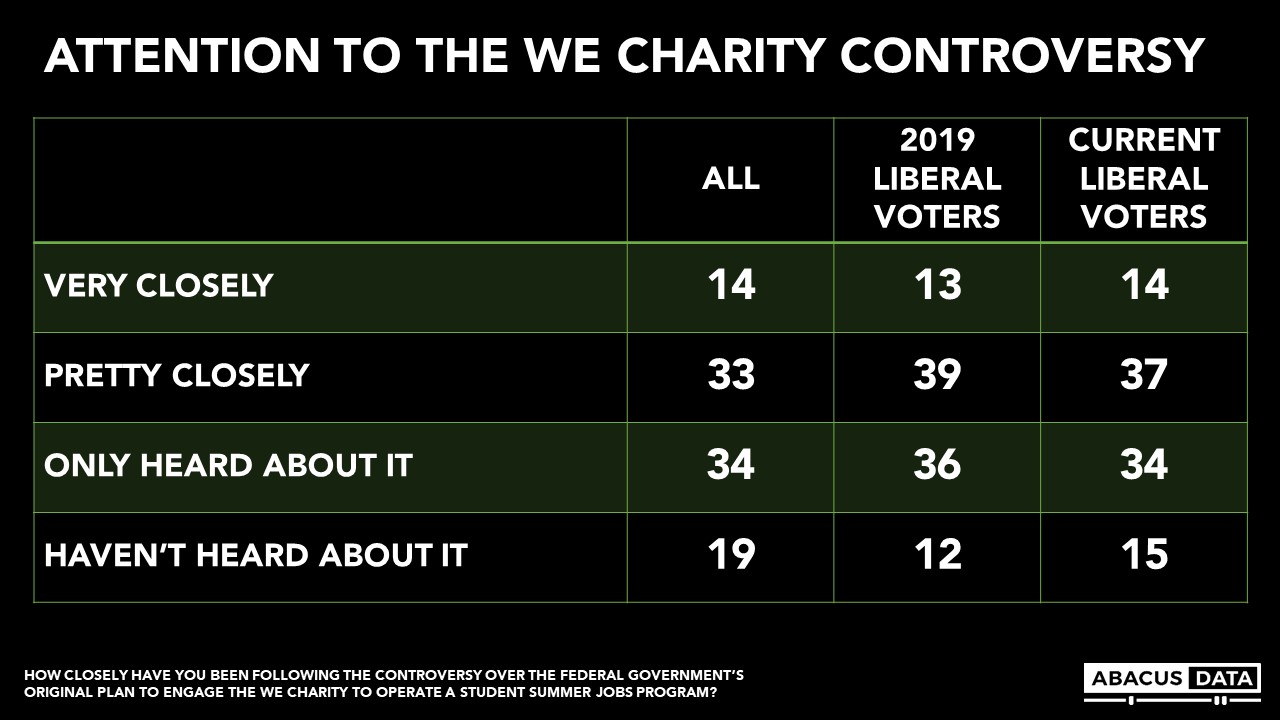 Based on what they have heard about the We Charity matter to date, 18% say the federal government has managed the matter well, another 28% say “ok”, while a majority give the government poor (29%) or very poor (24%) marks.

Reactions are fairly negative across the country, and even 40% of those who voted Liberal last fall says the government handled this poorly. 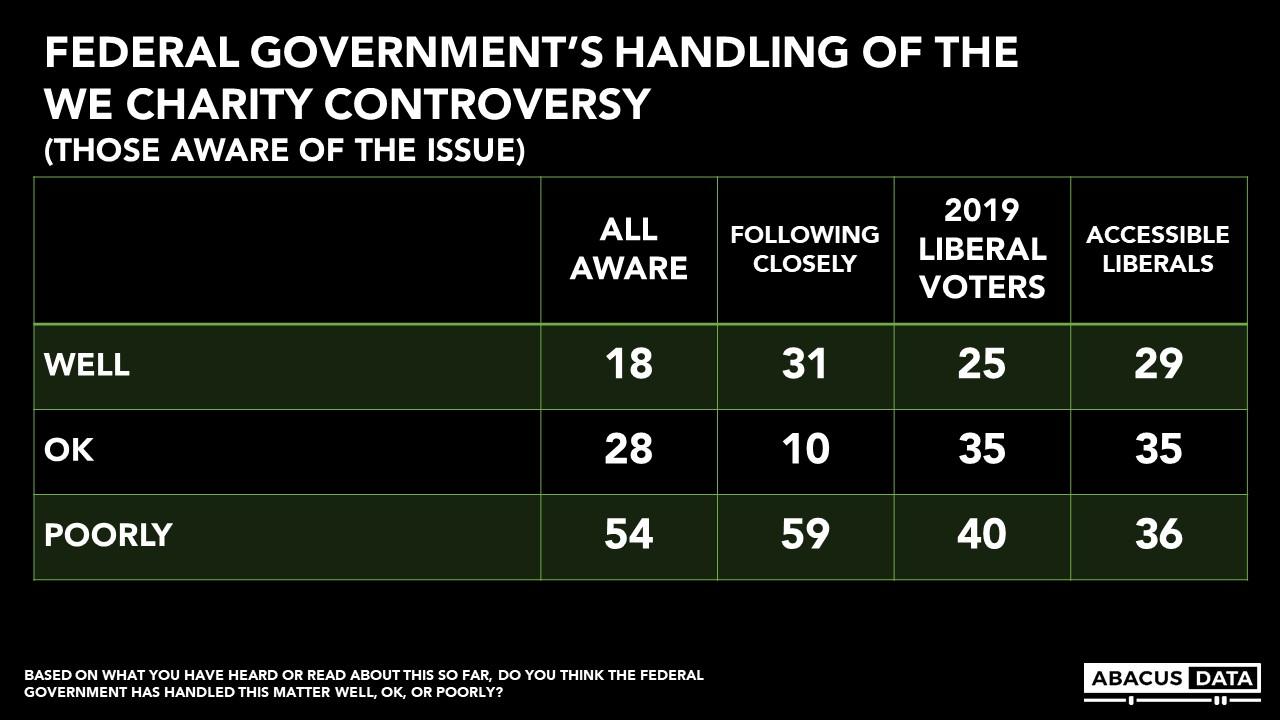 When asked if they feel the controversy is about “short time frames and a lack of proper diligence on the part of the government” or “an attempt to use public funds to reward people who are friends and supporters” – opinion is pretty evenly split, with the slight majority (53%) suggesting it was about patronage rather than a lack of diligence.

Quebecers are 6-points more likely than those in Ontario or BC to think the controversy was about using public funds to help friends and supporters.

Again it is worth noting that 31% of those who voted Liberal say the WE Charity controversy was about trying to reward friends and supporters. 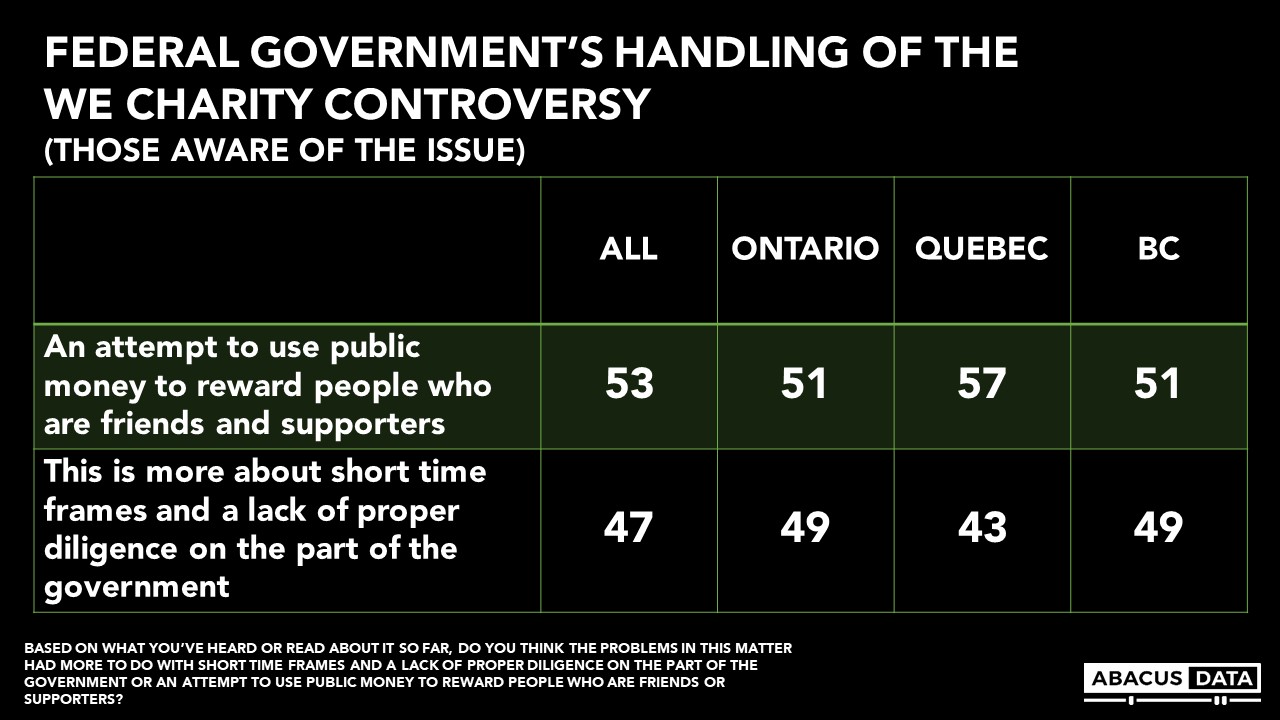 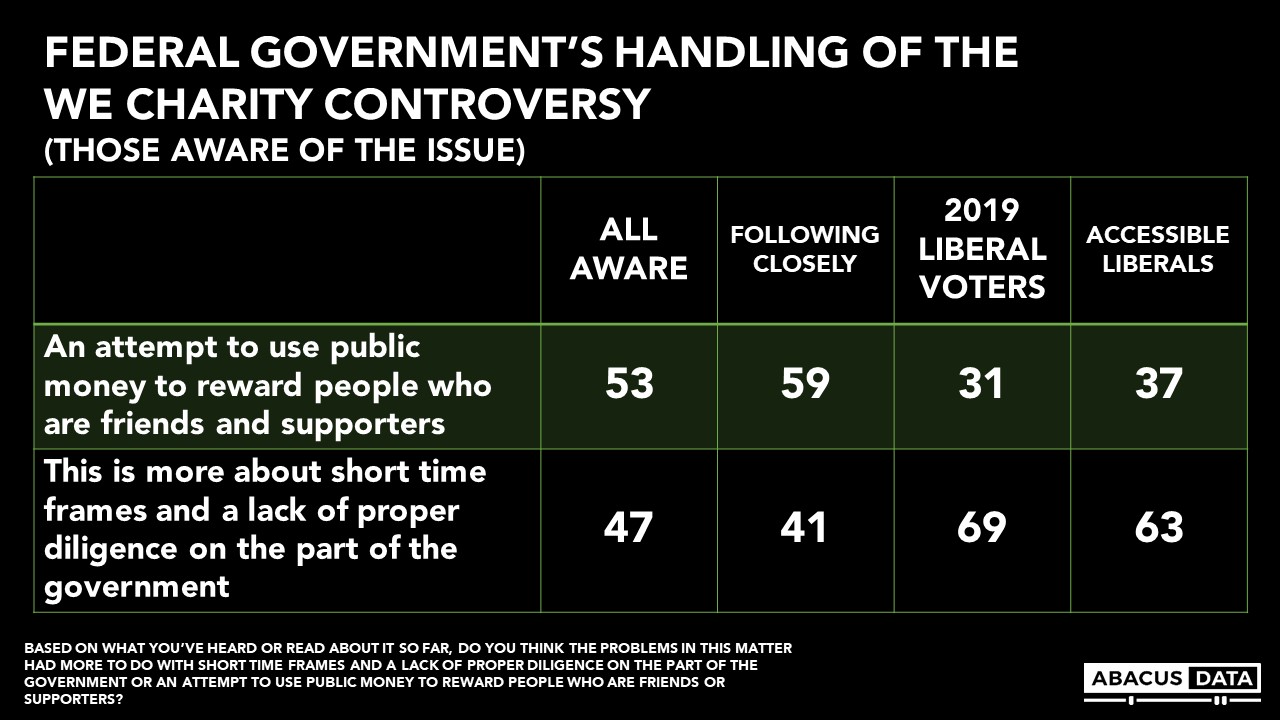 According to Bruce Anderson: “The WE Charity controversy has damaged the government’s standing with Canadians, after several months of people feeling fairly positive towards the Prime Minister and the Liberals. So far the damage is significant but not extreme. For the Liberals, these results are a reminder that ethical lapses can bring about a swift reversal of political fortune, and can undermine confidence even among those who supported the party at the ballot box only months ago.”

According to David Coletto: “For the past several months, impressions of the Prime Minister and the Liberal Party been trending positively as a result of the public’s positive evaluation of the government’s handling of the pandemic. Canadians evaluated the Prime Minister’s leadership through the lens of the crisis.

But, over the past few weeks, that lens has shifted as a result of the WE Charity controversy. Despite it being summer, Canadians remained highly engaged with current affairs and more continue to follow the news than they might normally do. It’s pretty clear to me that the controversy has harmed the Prime Minister’s image and pulled the Liberal vote down with it.”

The survey was conducted with 1,500 Canadian residents from July 13 to 16, 2020. A random sample of panelists were invited to complete the survey from a set of partner panels based on the Lucid exchange platform. These partners are typically double opt-in survey panels, blended to manage out potential skews in the data from a single source. 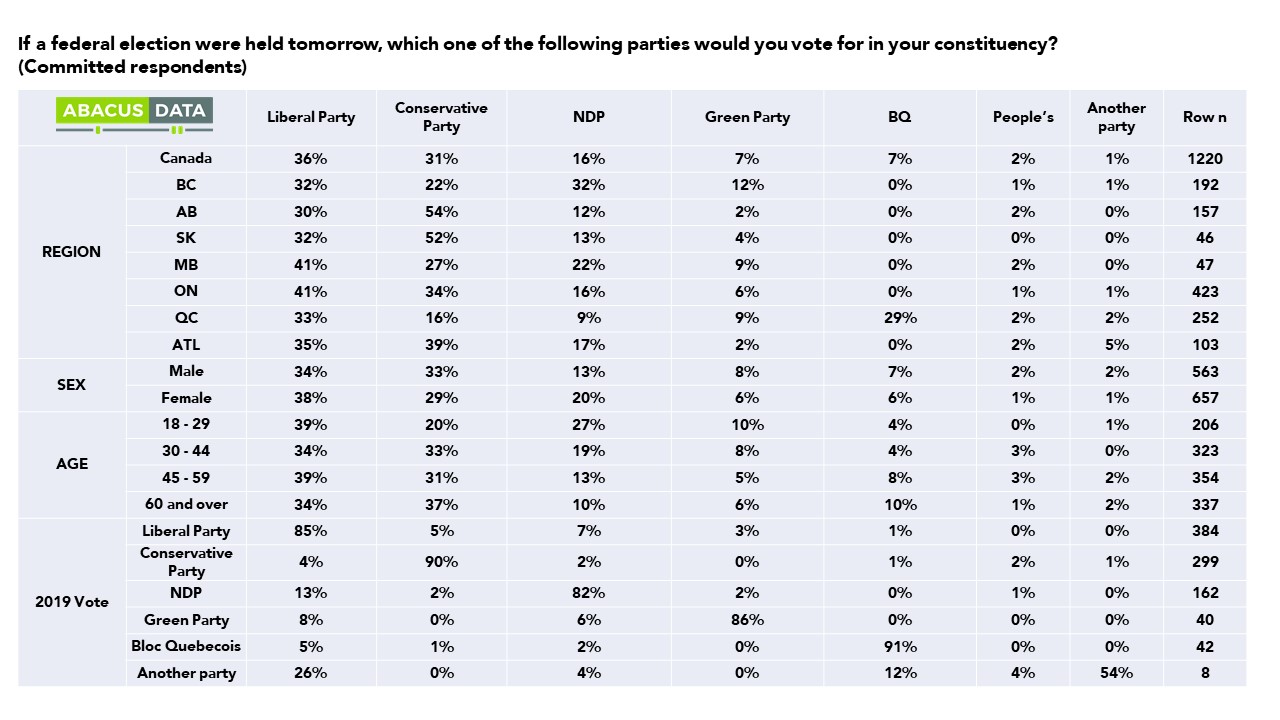