On behalf of the Canadian Life and Health Insurance Association, Abacus recently completed a nationwide survey of 1500 adult Canadians. The focus was to understand how Canadian adults feel about the policy choices that lie ahead for Ottawa on this file.

83% HAVE SOME FORM OF DRUG INSURANCE

Half of those surveyed say they have coverage of drug and other health benefit costs through a group insurance plan and another 10% purchase such benefits themselves. Four in ten are covered under a provincial plan (such as that in operation in Quebec and British Columbia).

Those who have group insurance benefits are broadly satisfied (85%) with the cost of their drugs, and 84% are satisfied with the range of drugs that are included in their coverage.

Three out of four people who have group coverage are required to pay a co-pay amount when filling out a prescription. Among these people, 88% say the co-pay amount is affordable or “affordable enough”.

About one in three voters said national pharmacare was among the more important factors when they were deciding how to vote in last October’s election. Another 39% said it was “relevant, but less important than other considerations.

We tested design characteristics for a national pharmacare program and found that the top two considerations were making sure that “no one faces financial ruin because of a rare condition and needing a rare drug” and “making sure those with no coverage can afford the most common drugs”. Limiting impacts on the federal deficit and taxes was also deemed important by most people as was paying less to pharmaceutical manufacturers. 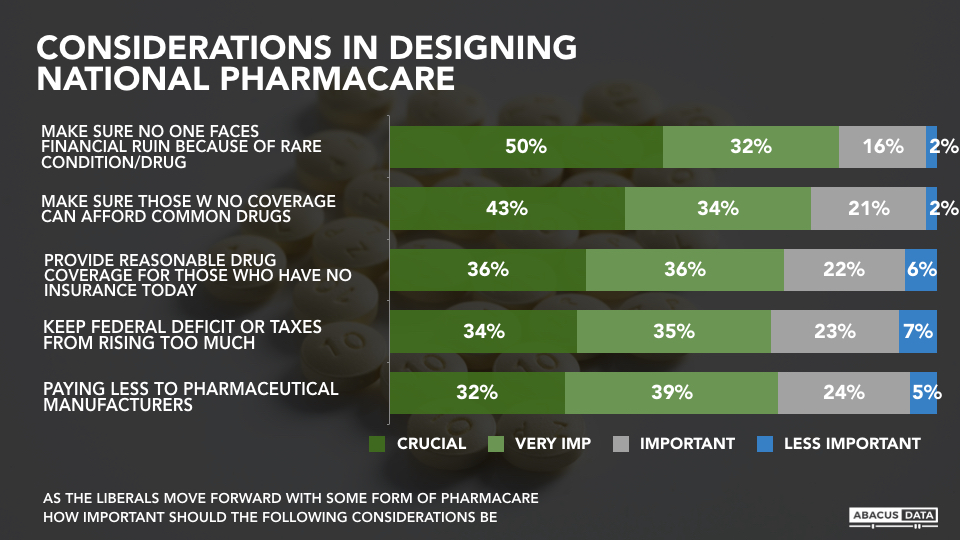 NEARLY UNANIMOUS SUPPORT FOR FEDERAL APPROACH THAT FOCUSES ON HELPING THOSE WITH NO COVERAGE TODAY; DIVIDED OPINION ABOUT A SINGLE-PAYER SYSTEM IF IT REDUCED RANGE OF DRUGS COVERAGE FOR SOME.

A total of 95% said they would support “a plan for government and insurance companies to work together to ensure everyone has affordable access to the most common drugs and those with group plans keep their benefits intact”. Support levels for this approach are very high across generations, regions and party lines. 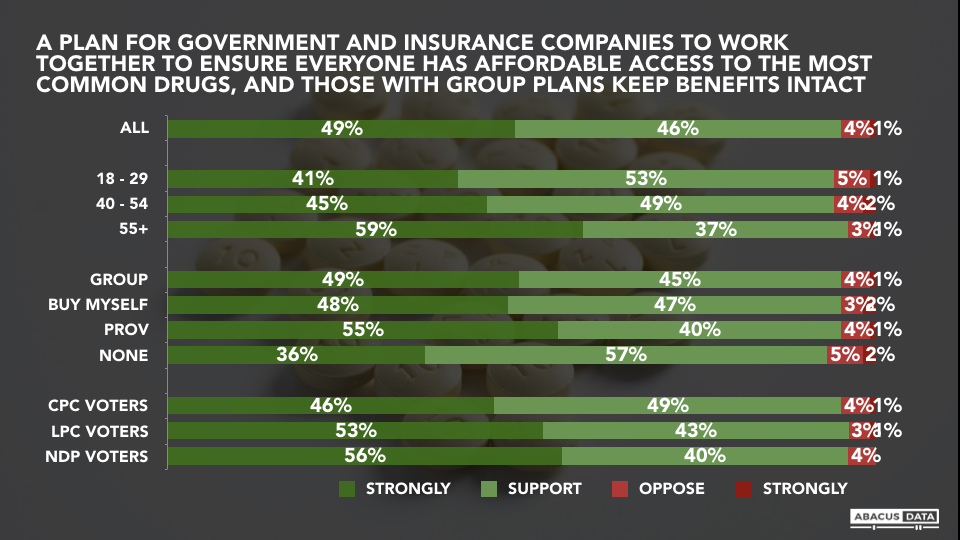 When asked how they would feel about a “plan that shifts everyone to a government-run plan which covers the most common prescription drugs, but those with a plan today might end up with fewer drugs covered”, support for this option clocked in at 48% and opposition was 52%. Older people were considerably more likely to dislike this approach. 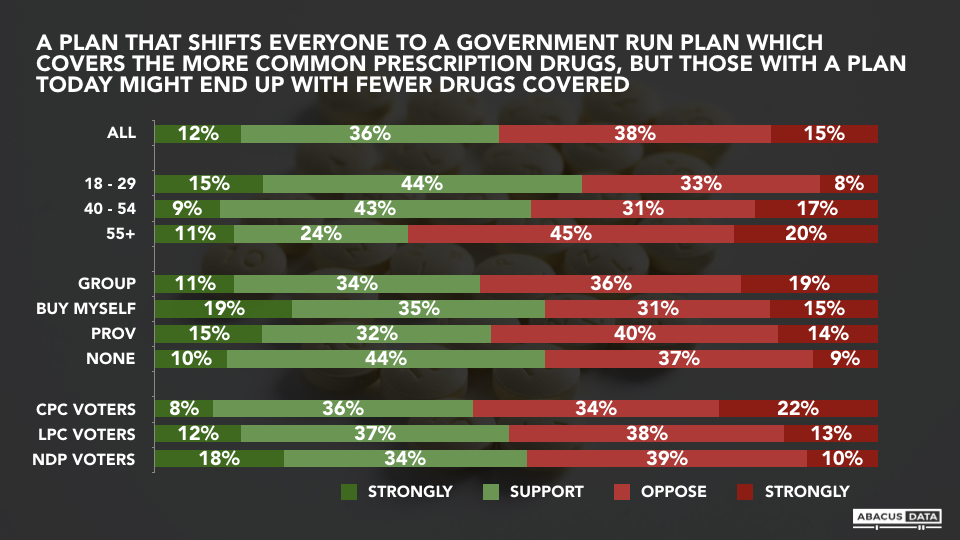 MOST THINK LIBERALS WOULD BE HONOURING CAMPAIGN PLEDGE WITH A TARGETED PROGRAM.

About two in three (67%) say the federal Liberals would be honouring their campaign pledge if they delivered a program focused on covering those with no coverage; only 39% would feel the same way if the result was a program that covered everyone the same way and ended up reducing the range of drugs covered for those who are currently in group plans. 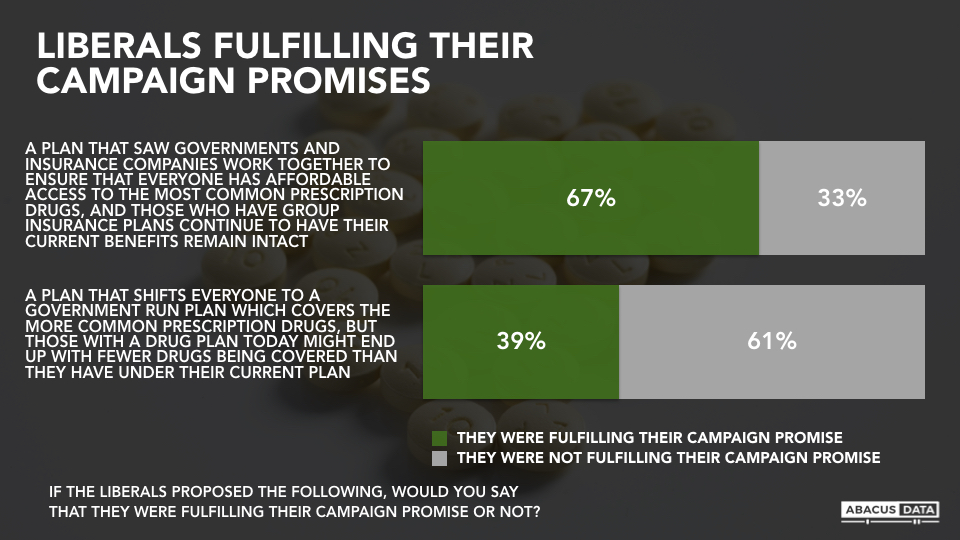 Given a choice between these two scenarios, 80% would prefer to see their MP vote for an approach that is targeted to help those with no coverage today rather than a single-payer system run by the government. This includes 80% of Conservative, 83% of Liberal and 87% of NDP voters. 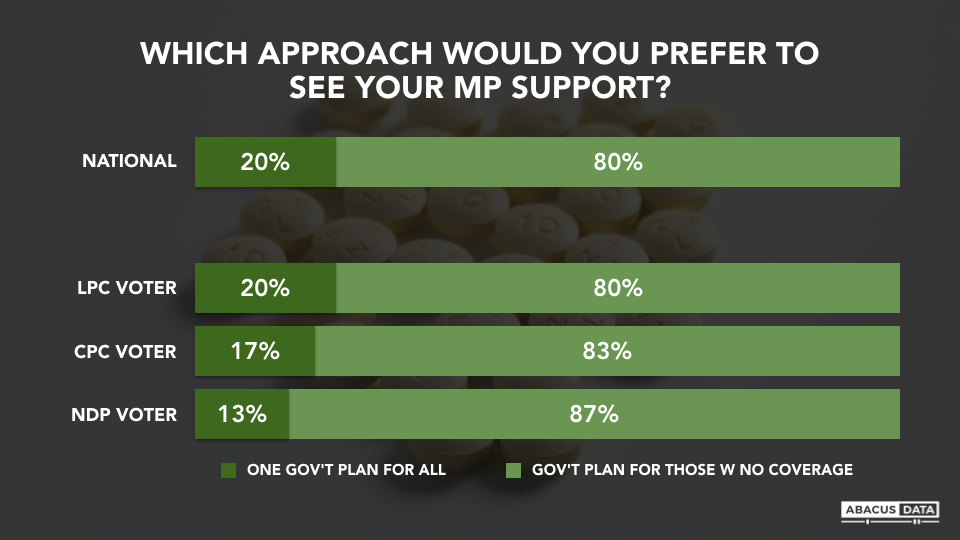 Again this year, and after exposure to the issue in the last federal election campaign, Canadians remain enthusiastic about the goal of helping protect people from financial hardship when it comes to needed prescriptions. At the same time, the level of satisfaction experienced by the large majority today leads them to the conclusion that government efforts are best focused on those who lack coverage today or who could be experiencing catastrophic coverage costs. There is significant hesitation about a single-payer program, especially if it would lead to a situation where some who have broad coverage today might see that coverage reduced in some way.

For the Trudeau government, the expectations of voters are more likely to be met with a targeted program, than with an initiative that might feel as though it was disrupting something they feel is working well for them today.

Our survey was conducted with 1,500 residents of Canada aged 18 and older from January 22nd to 26th 2020. A random sample of panelists were invited to complete the survey from a set of partner panels based on the Lucid exchange platform. These partners are typically double opt-in survey panels, blended to manage out potential skews in the data from a single source.

The margin of error for a comparable probability-based random sample of the same size is +/- 2.5%, 19 times out of 20. The data were weighted according to census data to ensure that the sample matched Canada’s population according to age, gender, educational attainment, and region. Totals may not add up to 100 due to rounding.

Latest Public Opinion on National Pharmacare: Canadians prefer a dollar-wise focus on those who have...
Canadian Perspectives on Pharmacare