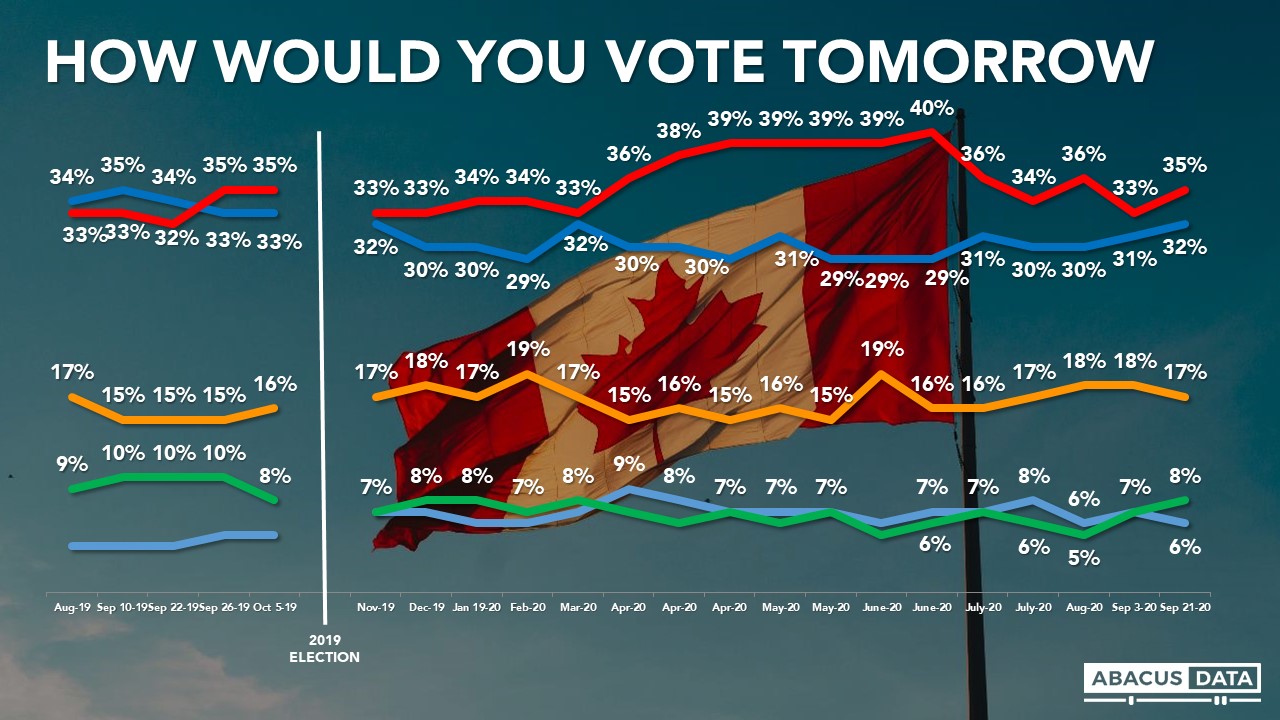 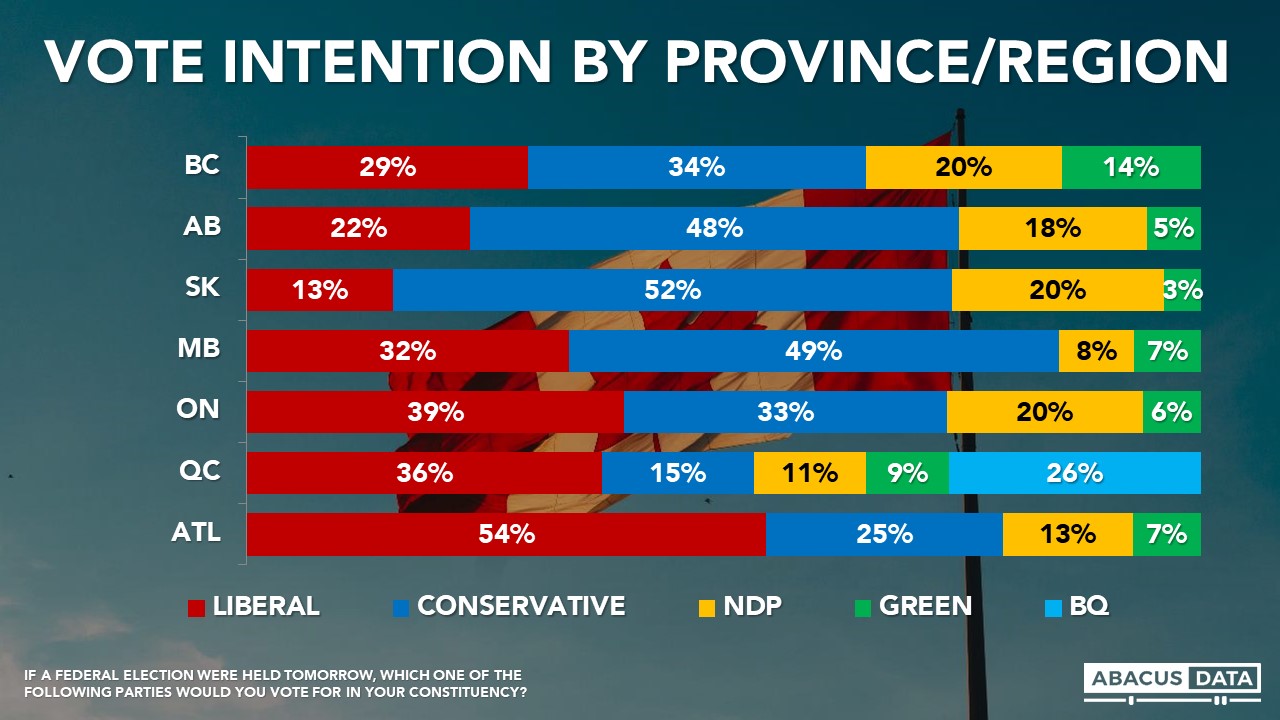 As he sets to outline the government’s agenda to a new session of Parliament, the Prime Minister’s image remains split with 40% having a positive view of him and 39% having a negative view. Although down from highs in May and June, the PM’s numbers are still stronger than they were before the pandemic began. 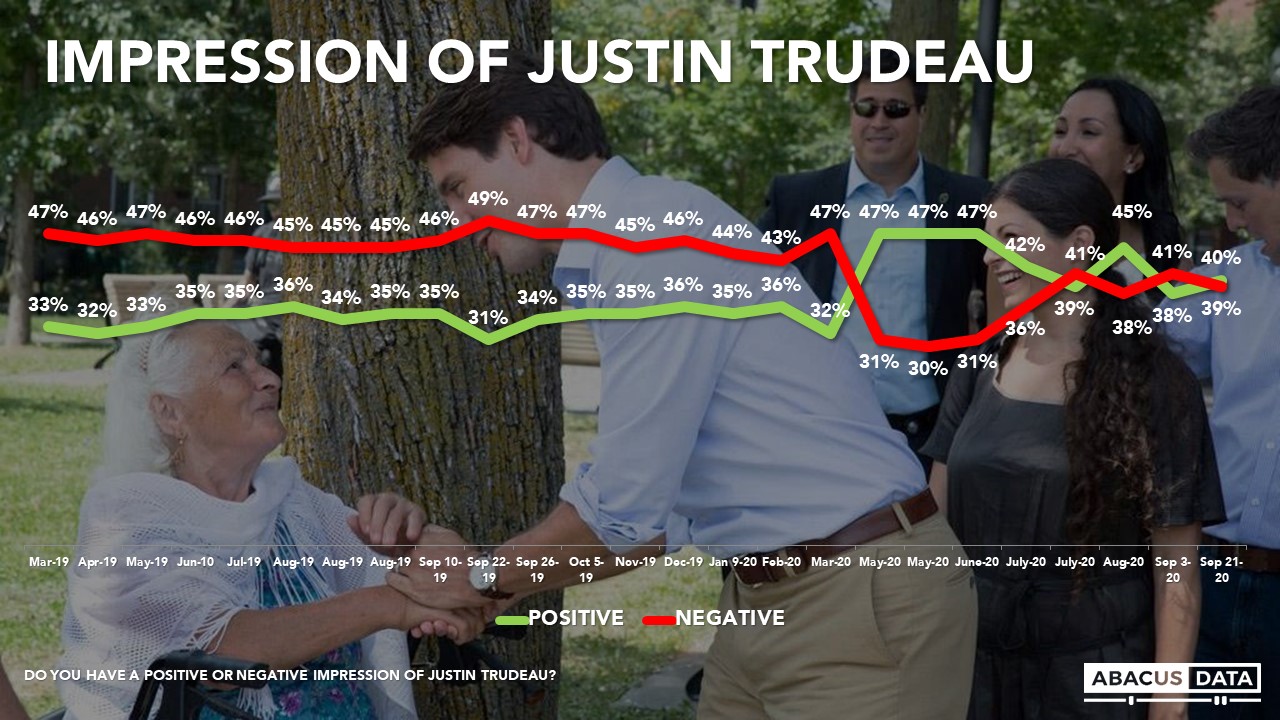 Impressions of Mr. O’Toole have become slightly more negative over the past few weeks. 23% have a negative view of the Conservative leader compared with 22% who have a positive view.

Mr. Singh’s numbers remain more positive with 34% having a positive impression (down 3 since early September) and 25% negative. 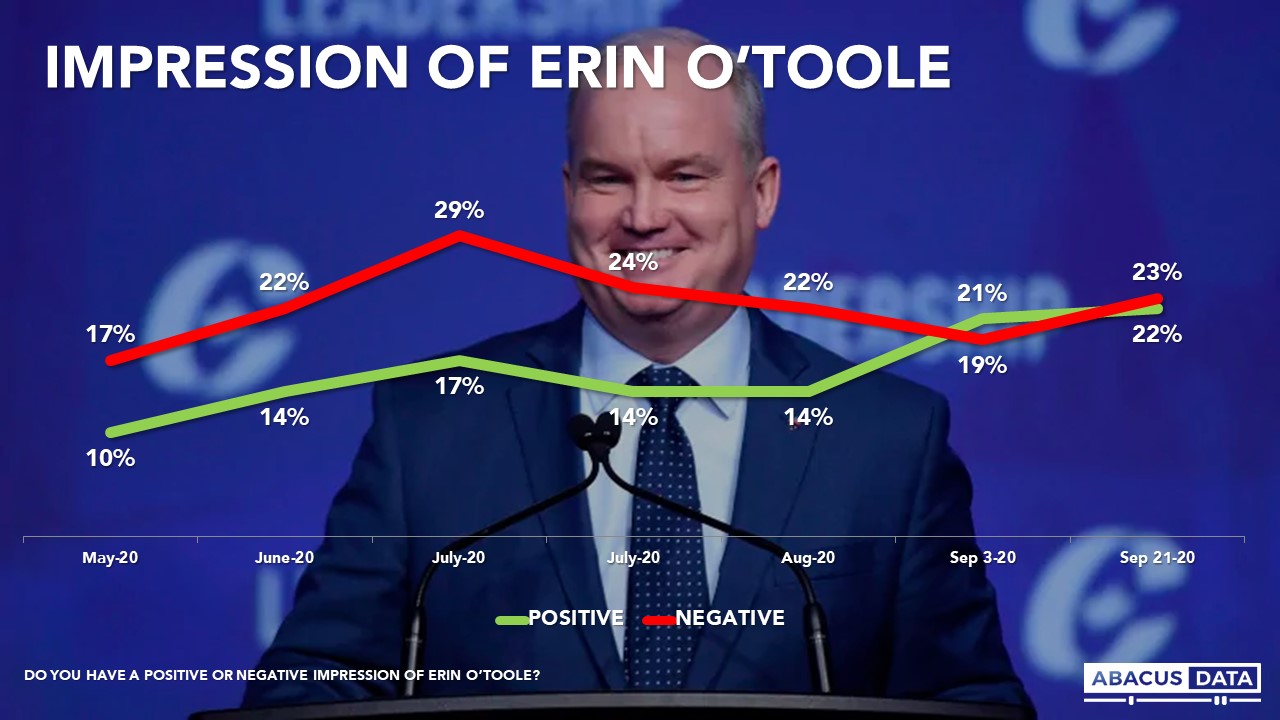 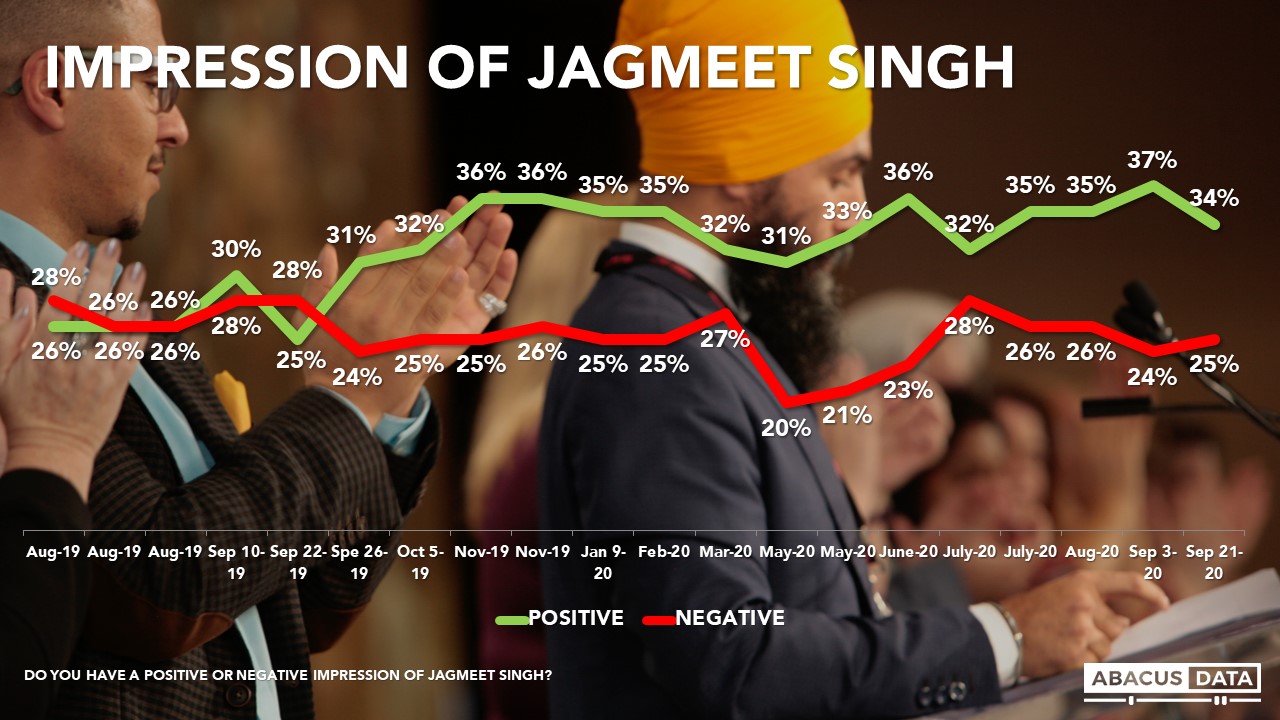 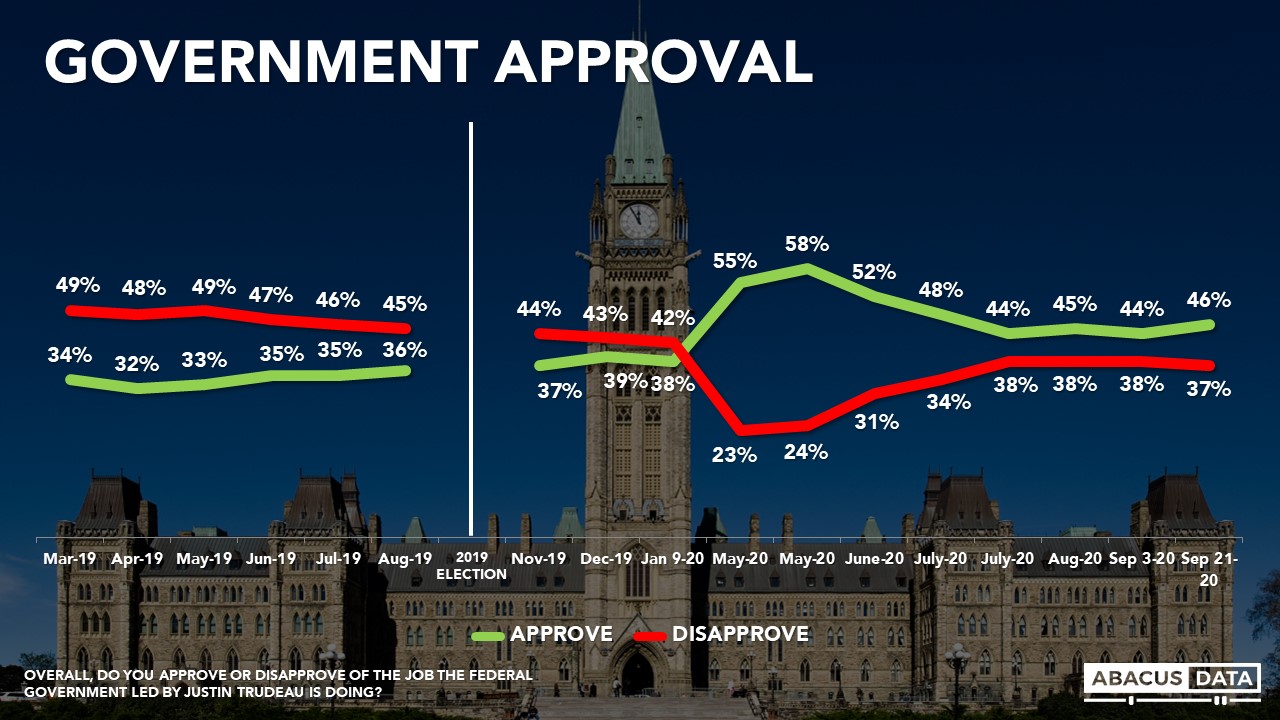 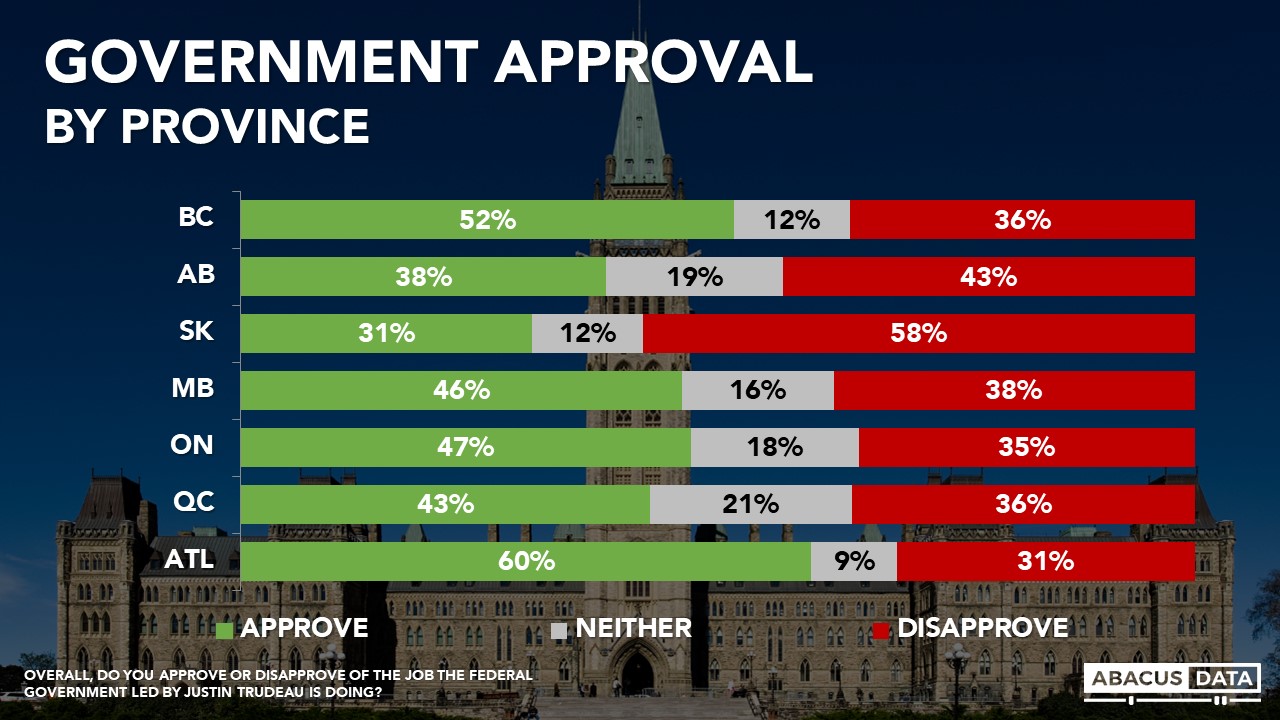 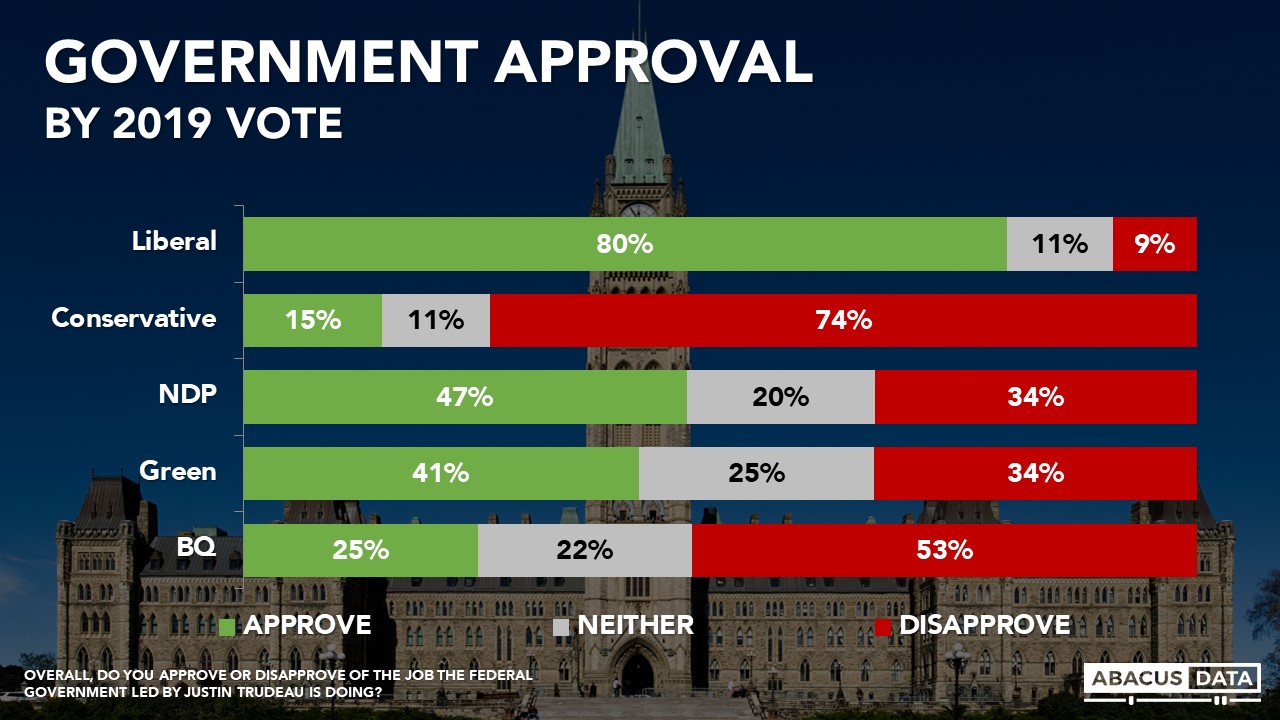 The gap between the federal government’s approval rating (46%) and the Liberal vote share (35%) is something to watch carefully. It suggests the Liberal vote share has plenty of room to grow and maybe underperforming. For comparison, just prior to the start of the 2019 election campaign, the government’s approval rating was 36%. It ended up with 34% of the popular vote.

If that 13% who are undecided did vote Liberal, the party’s vote share would increase to 42% and the Liberals would have a 10-point lead over the Conservatives. That gap between approval and vote is something to monitor closely over the next few months.

According to Bruce Anderson: “We are heading into a period of remarkable uncertainty – on any number of fronts – including the pandemic, the global economy, the US elections. The patterns of opinion provincially and federally tend to underscore that people are drawn towards stability over disruption in this period of time. Events that might in other circumstances carry more political charge seem to be ignored by many people, as the focus is on getting through a day, a week, a month at a time, and hoping for a solution to the pandemic before too many more months. These numbers are a reminder to government that people are looking for steady over flashy and to opposition parties that partisanship for its own sake carries a particularly bad odour today as voters struggle with everyday life.”

According to David Coletto: “The Canadian political landscape appears to have entered another period of stability, despite a high level of public uncertainty and anxiety. Despite Erin O’Toole’s win as Conservative leader and perhaps because of the on-going COVID-19 pandemic, public opinion has remained relatively stable for the past few months.

The Liberals and Conservatives are competitive in vote intentions, but the Liberal government has a solid and durable approval rating. The Prime Minister’s image remains more positive than it was before the pandemic started.

As the government outlines its new agenda for the next session of Parliament, it does so in a position of relative strength. It has healthy leads in Ontario and Quebec and is continued to be viewed positively by almost half the country. The pandemic and its economic and social impact have Canadians on edge but so far, many are satisfied with the federal government’s performance.”

The survey was conducted with 1,500 Canadian residents from September 18 to 21, 2020. A random sample of panelists were invited to complete the survey from a set of partner panels based on the Lucid exchange platform. These partners are typically double opt-in survey panels, blended to manage out potential skews in the data from a single source. 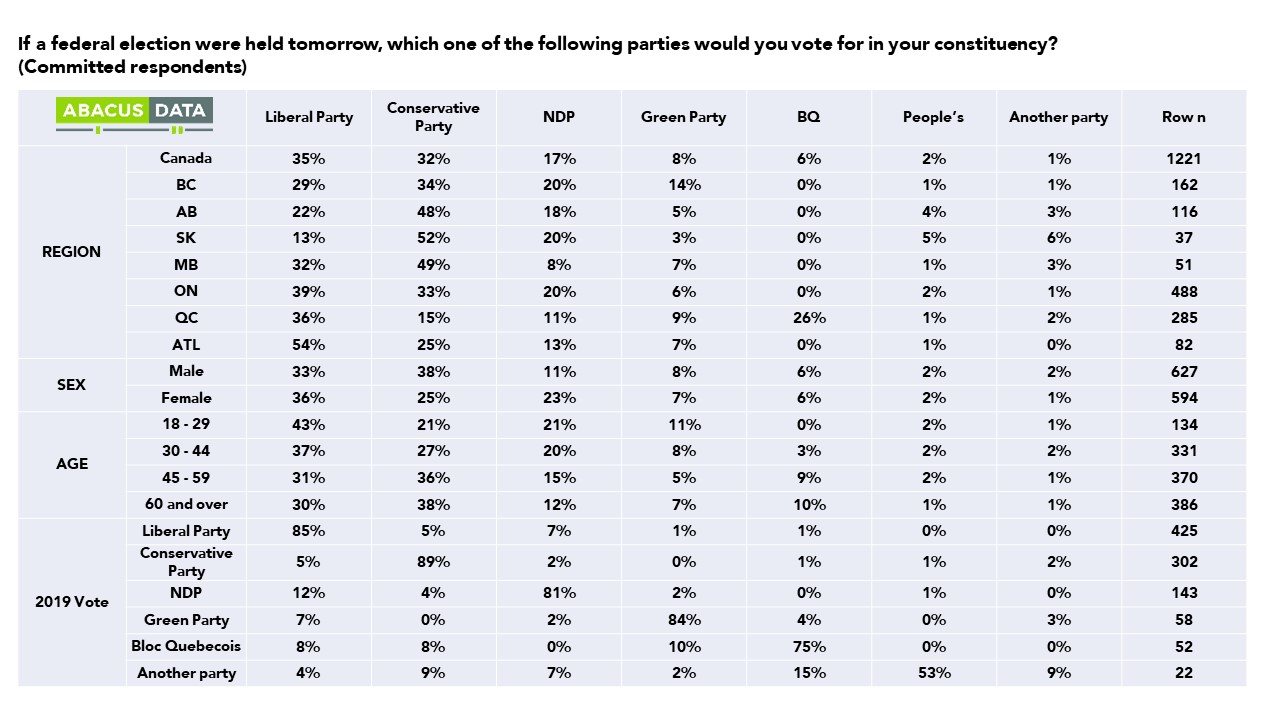