Our latest national survey of 2,070 Canadian adults from June 18 to 21, 2021 finds the Liberals opening a 10-point lead over the Conservatives as the federal government’s approval rating improves.

Since our last survey, we see a four-point rise in approval of the federal government’s performance, to 44% with 38% disapprove. While movement on this indicator has been very limited this year, 44% is the highest number we recorded since January. 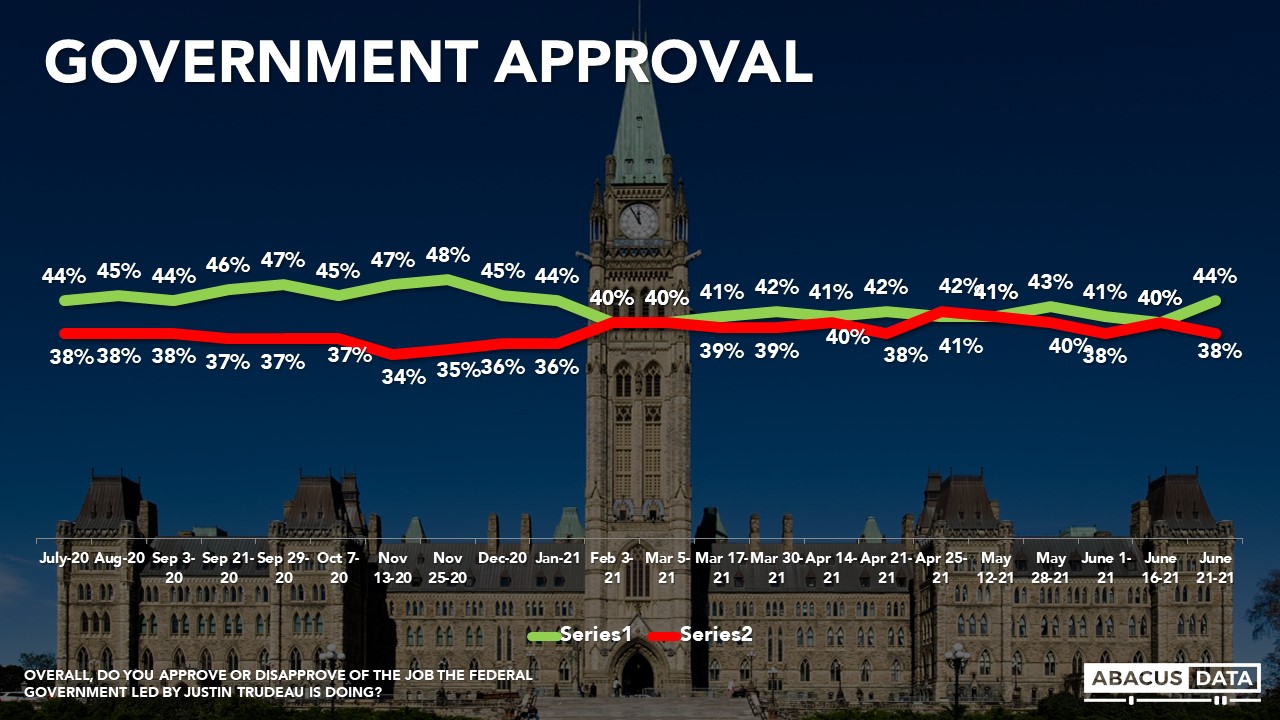 Comparing these results to the outcome of the 2019 election, the Liberals are 4 points higher, the Conservatives 7 points lower, and the NDP 2 points higher. 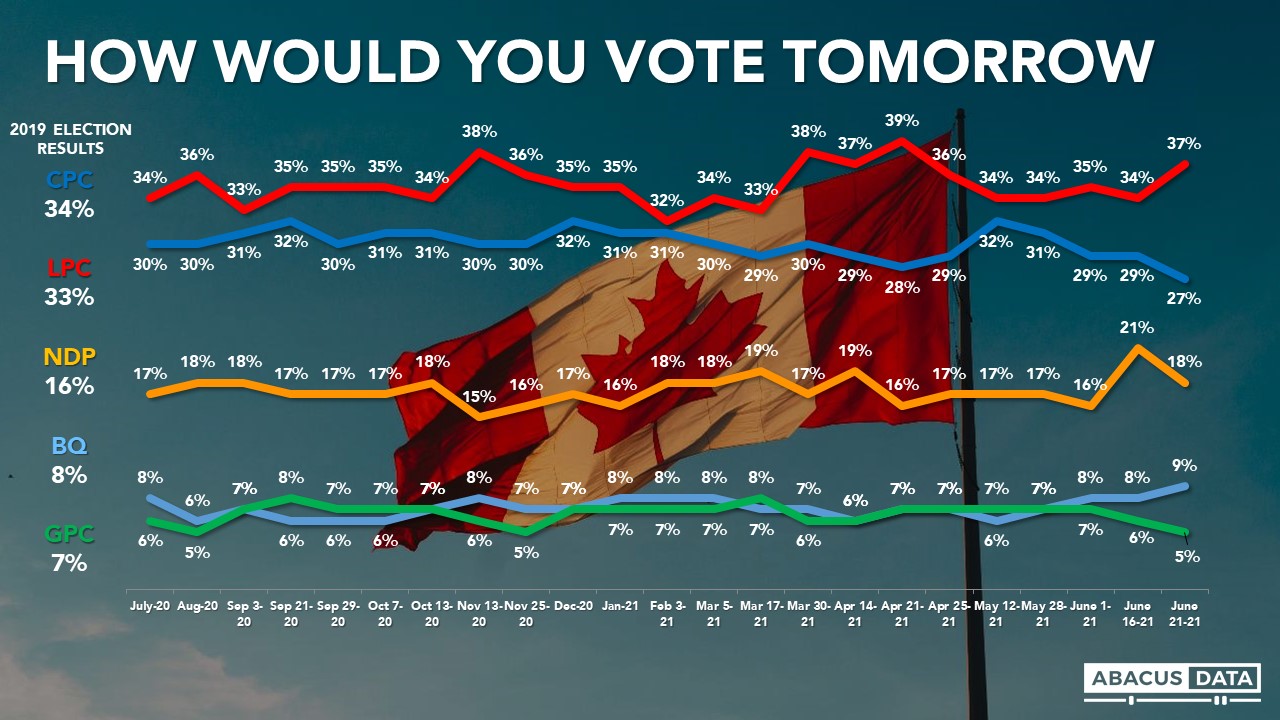 While regional breakdowns are obviously important, readers are encouraged to read these breaks with appropriate caution, as sample sizes are smaller and margins of error higher.

• In this wave we see the Conservatives with 39% in Alberta, compared to 34% for the Liberals and 18% for the NDP. The People’s Party claims a 7% share.

• In Atlantic Canada, we find 50% support for the Liberals followed by the Conservatives at 27% and the NDP at 13%.

Worth noting is that the higher support levels for the Liberals in the Prairie provinces may be an anomaly and reflect smaller cell sizes, but we do also see a 6 point rise in federal approval in Alberta and a 9 point rise in Manitoba/Saskatchewan since the beginning of June. 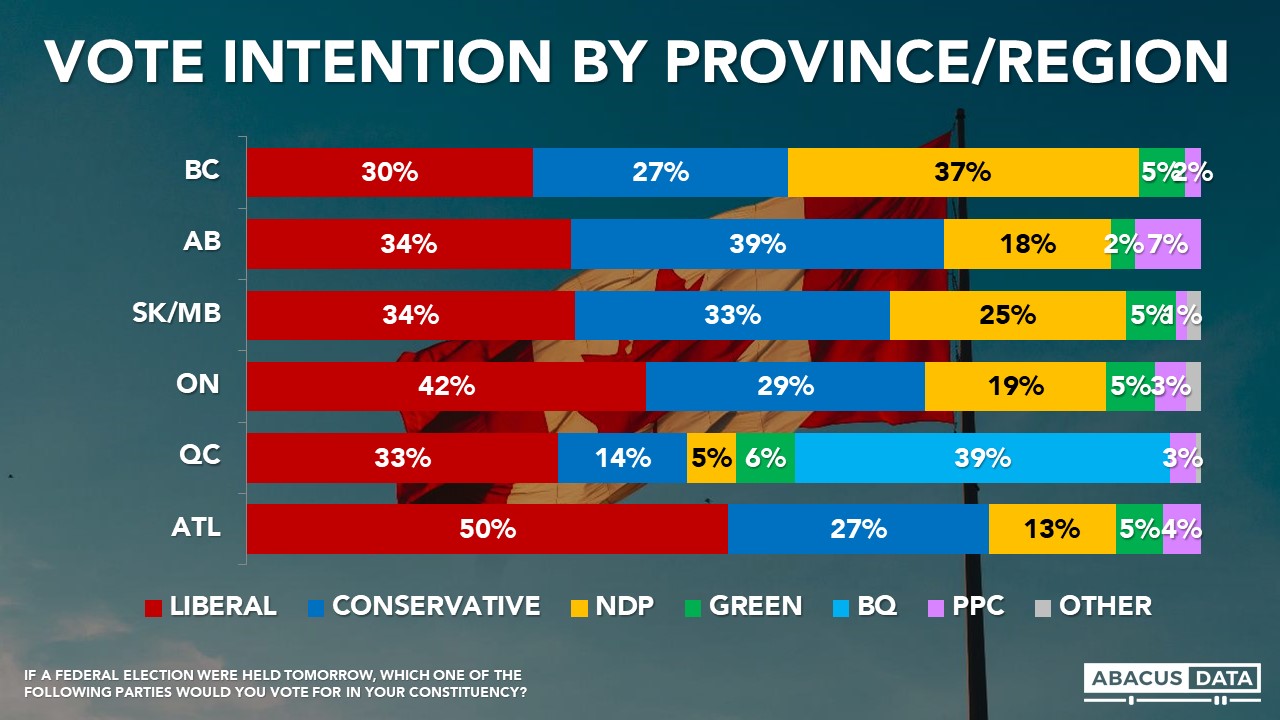 Annamie Paul has seen her negatives increase over the past two weeks. 12% have a positive impression while 25% have a negative one for a net score of -13. 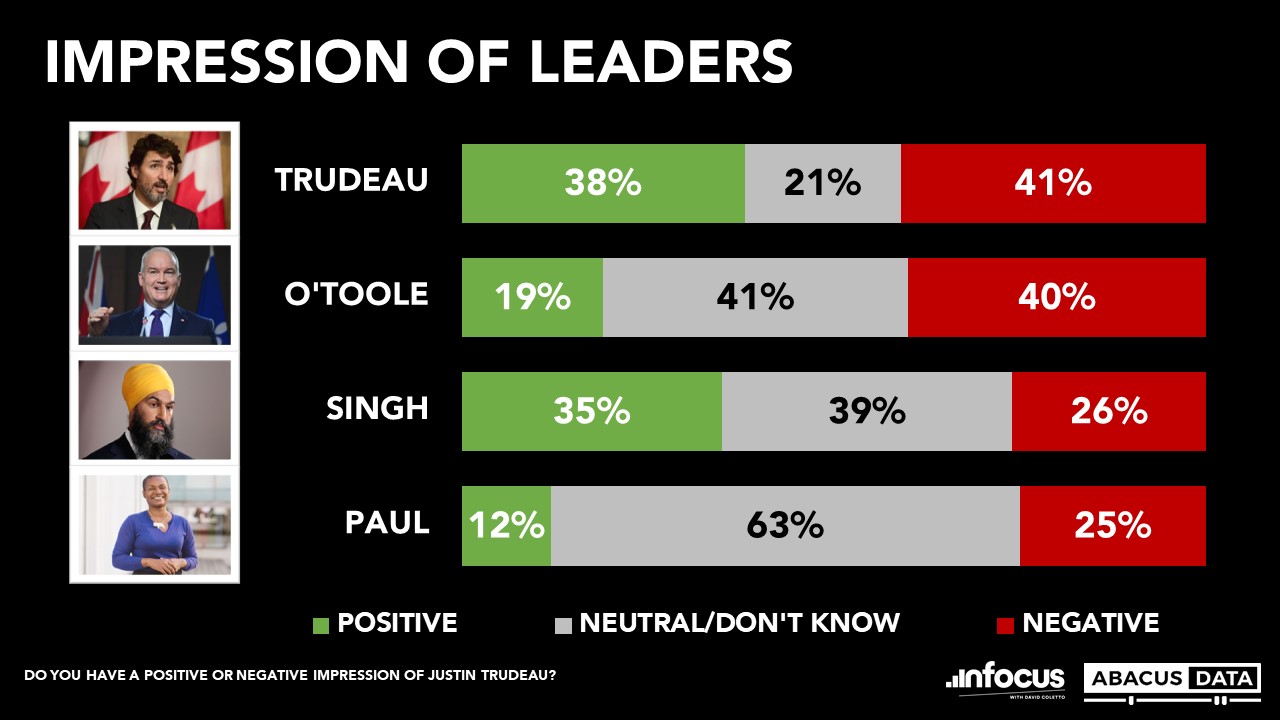 On three measures of federal performance related to the Covid19 pandemic, the federal government has seen generally improving numbers recently.

• On supporting the economic needs of Canadians 41% say Ottawa is doing an excellent or good job compared to 24% poor/terrible for a net +15.

• On finding the right balance between protecting health and the economy, 38% give good marks compared to 29% poor/terrible rating, for a net of +9, up substantially since a -6 net in April.

• But by far the biggest improvement has been on “making sure that Canada receives vaccines in as timely a fashion as possible, with 46% giving the government excellent/good ratings compared to 26% poor/terrible. In roughly a month, the government net score on that item has gone from -8 to +20. 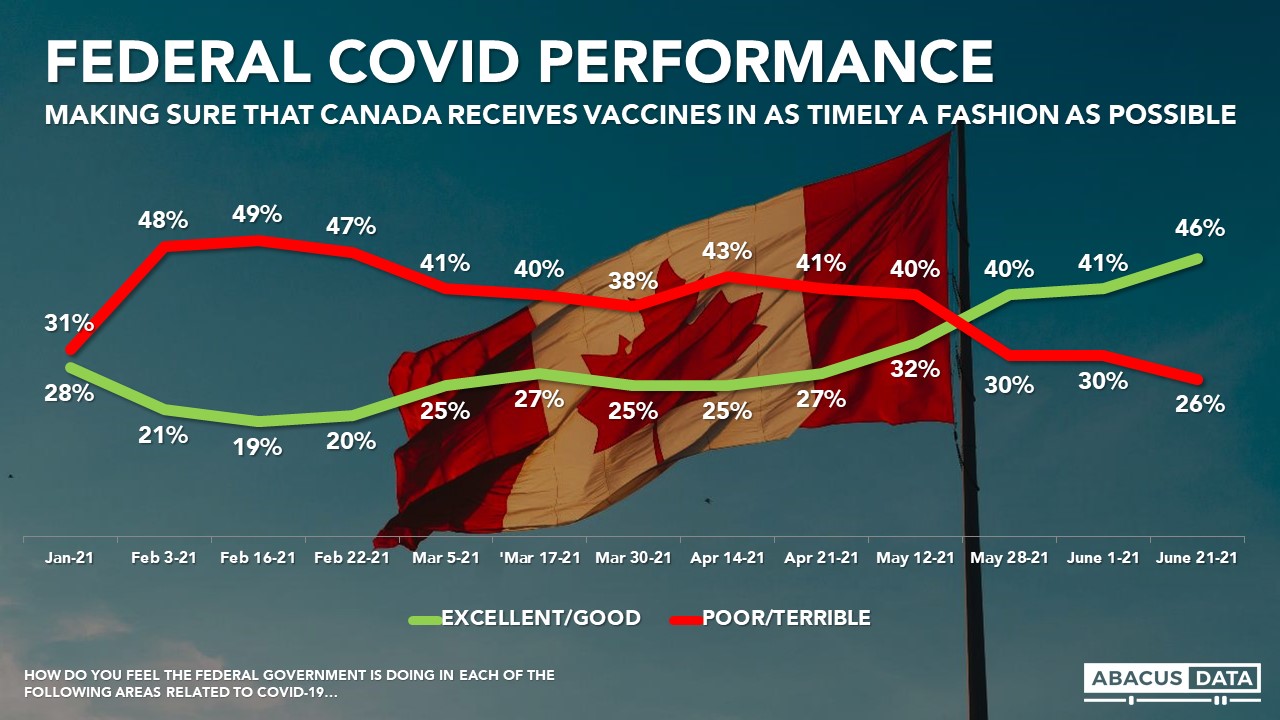 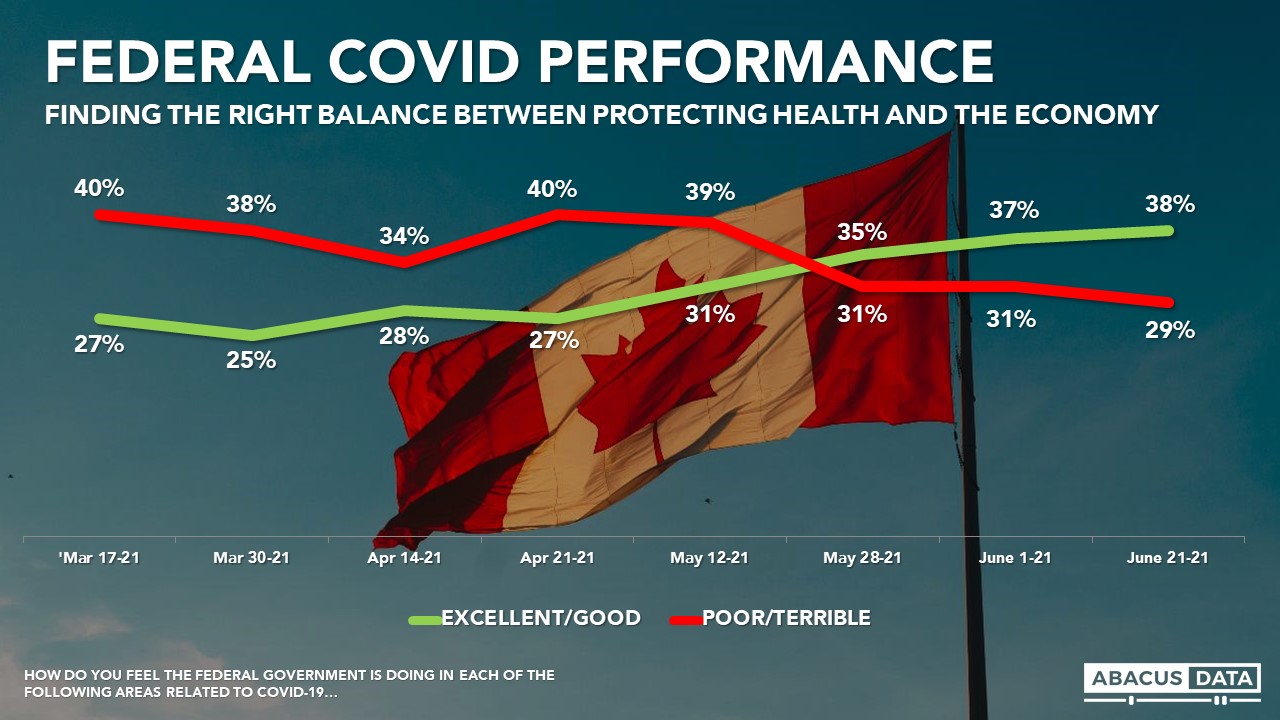 As election speculation is heating up, we thought it would be useful to compare the situation between the two largest parties in the House today, with where things were before an election call in 2019.

The Liberals trailed by 4 heading into that election, compared to a 10-point lead today. Today’s approval rating for the Trudeau government is 9 points higher than it was in 2019. Impressions of PM Trudeau are 5 points better this year, while impressions of Mr. O’Toole are 14 points lower than they were for Mr. Scheer.

Finally, in August 2019, 53% of voters were determined to see a change in government, today that number is 38%. 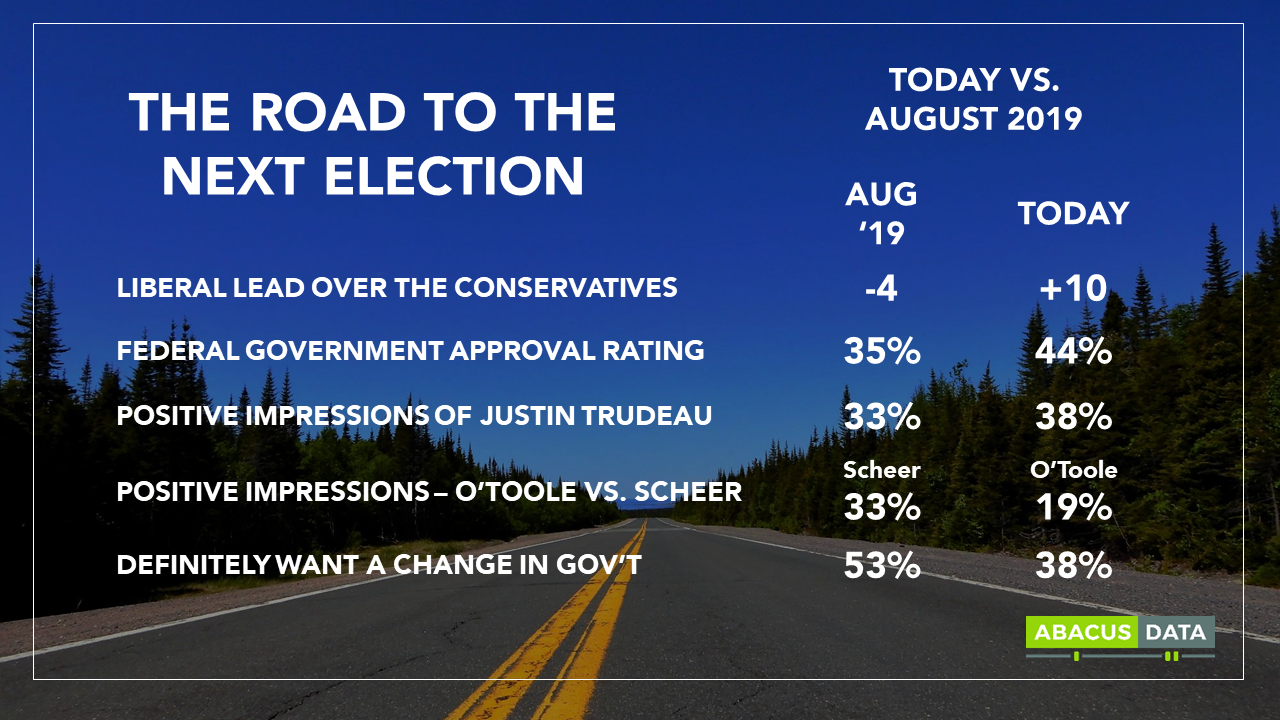 A FEW OTHER THINGS WORTH HIGHLIGHTING

Among self-described left of centre voters, the Liberals have 53% support followed by the NDP at 31% the Conservatives 5%, the Green Party 4% and the BQ 6%.

Among the self-described right of centre voters, the Conservatives have 67% of the vote, followed by the Liberals 14% the NDP 6%, the Peoples’ Party 7%.

Among the largest block of voters, who self-describe as on the centre of the spectrum, the Liberals lead with 36% followed by the Conservatives at 22%, the NDP at 14%, the BQ 15%.

Among those who self describe as visible minority, the Liberals (44%) have a 22-point lead over the Conservatives (22%), followed by the NDP (20%).

Justin Trudeau’s net image (positive impression minus negative impression) in the three biggest seat provinces is +2 in BC, 0 in Ontario and -4 in Quebec. He is +82 among his own party supporters, -5 among NDP voters, and -69 among Conservative voters. Trudeau is -6 among voters under 30.

According to Bruce Anderson: “As summer arrives and vaccinations continue to reach more and more people, the Liberals are seeing some wind in their sails. For the Conservatives, the data suggest a continuing struggle to find a message that is compelling or an issue that is galvanizing for them. Their support is softer in the Prairies and rivals on the right are making it more difficult for Mr. O’Toole to fashion a story of momentum, or to find a platform that is uniting western and eastern conservatives, and captivating for non-conservatives. The NDP continues to pose a challenge for the Liberals, especially among younger voters. But for the moment, anyway, progress in ending the pandemic is the focal point for most voters and this is working to ease frustrations with and grow support for the Liberals.”

According to David Coletto: “The Liberals have opened up their largest lead over the Conservatives in three months built on a higher approval rating for the government overall, improving impressions about its handling of the pandemic, and worsening impressions of Mr. O’Toole and the Conservatives. If an election does come this summer, the Liberals are in a much stronger position than they were prior to the start of the 2019 campaign.”

The survey was conducted with 2,070  Canadian adults from June 18 to 21, 2021. A random sample of panelists were invited to complete the survey from a set of partner panels based on the Lucid exchange platform. These partners are typically double opt-in survey panels, blended to manage out potential skews in the data from a single source. 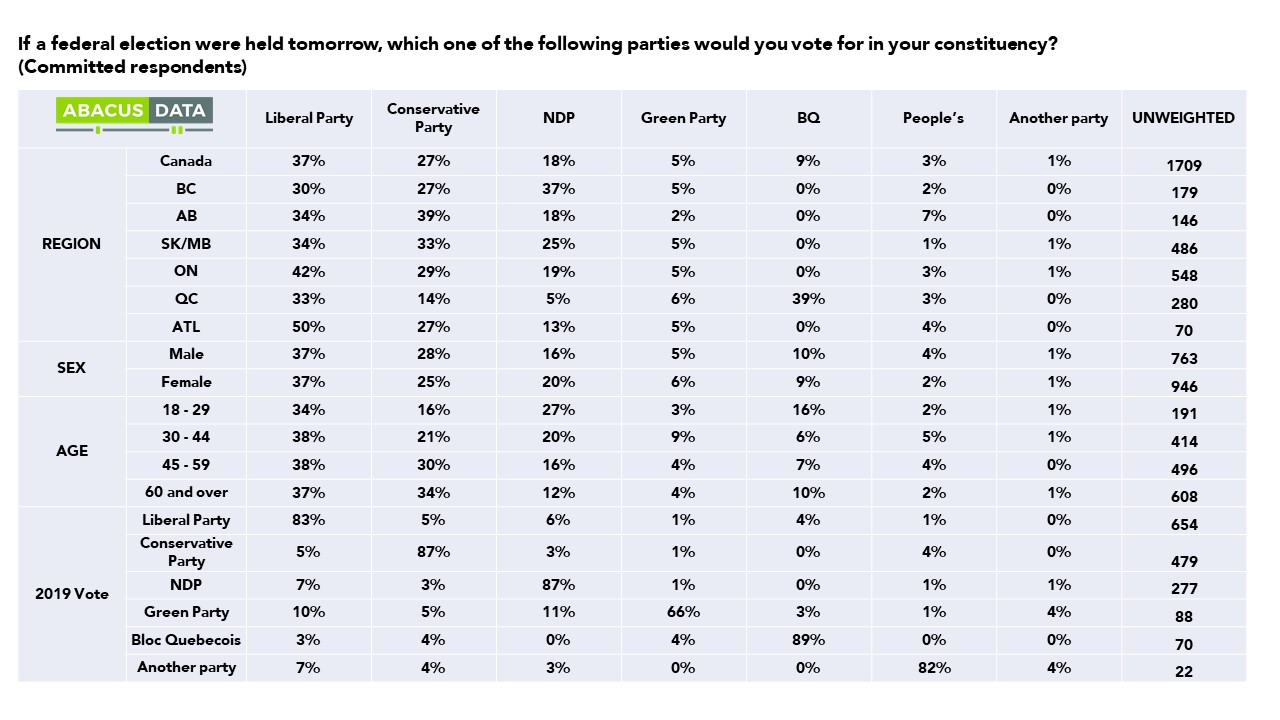 You vaxxed? Millions are asking each other and relationships might hang in the balance
2.4 million are vaccine “maybes”, another 2.4 million say “no”. More than 5 million doubt the second...
How Canadians view the federal party leaders
2021 is not 2019: Liberals well ahead as Conservative vote hits a new low
Liberals lead by 5 but NDP makes big gains