While opinion in the country as a whole is divided among the three major political parties, millennials have a clear preference for the NDP.
Abacus Data’s exclusive poll for The Huffington Post Canada on the views of Canadian millennials suggests that 36 per cent of decided voters would vote for the NDP. That puts Thomas Mulcair’s party nine points ahead of the governing Conservatives in that age bracket, although the New Democrats trail the Tories in surveys of the entire voting population.

“Right now, the NDP has a healthy lead among Canadian millennials with the Tories and Liberals fighting for second,” said Abacus’ David Coletto, adding the whole picture could change if Justin Trudeau becomes leader of the federal Liberal Party.

“I think Trudeau has enormous potential to engage and connect with Canadian millennials. But he has to be genuine and offer concrete policies that will help us (millennials), otherwise he will be seen like every other politician in Ottawa,” he said. 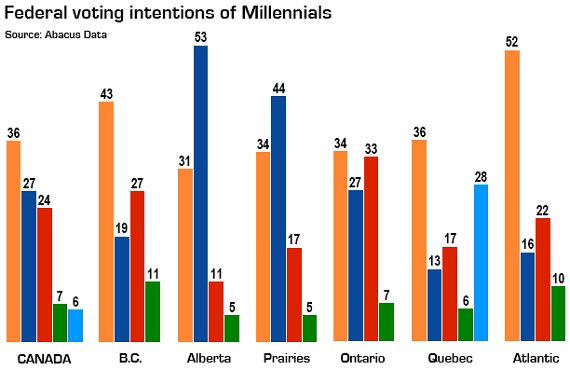