The vast majority of millennials consider themselves to be good citizens, but there is not nearly as much consensus on what that means — a disagreement often influenced by age, education and country of origin.

Abacus Data polled 1,004 Canadians of the Millennial Generation —aged 18 to 30 — on a variety of issues between Oct. 23 and 25. Overwhelmingly, respondents to the poll, carried out for The Huffington Post Canada, believed they were good citizens.

This may not necessarily be representative of the entire generation, however. People who consider themselves to be bad citizens are not likely to volunteer information to a pollster. And this kind of self-evaluation may not be accurate. For example, when surveyed, a majority of people tend to believe they are better drivers than the average person. 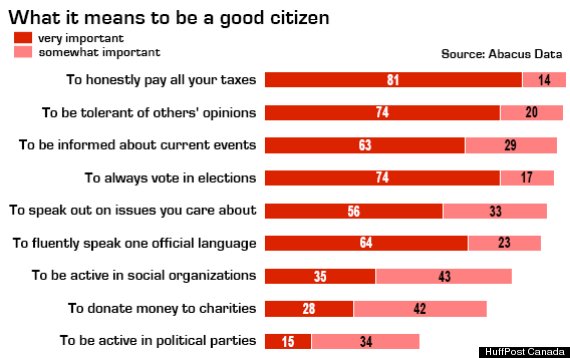