75% SAY IT IS A GLOBAL TREND, BENEFICIAL FOR CANADA IN THE LONG TERM. MOST FEEL IT IS NECESSARY AND WILL HAPPEN.

IN ALBERTA, OPINION REVEALS MORE DISCOMFORT, BUT MOST SAY A TRANSITION TO LOWER CARBON ENERGY IS NECESSARY AND WILL HAPPEN. 60% WANT THE PROVINCE TO PLAN AN ECONOMY LESS DEPENDENT ON OIL.

A strong majority of Canadians believe the transition to energy that produces less impact on climate change is a global conversation, bound to happen, and something necessary whether we like it or not. Most also think it will be good for Canada in the long run, even if it might make life more expensive.

⦁ 75% say the conversation about an energy transition is a global one, not isolated to Canada. This view is equally widely held in Alberta. 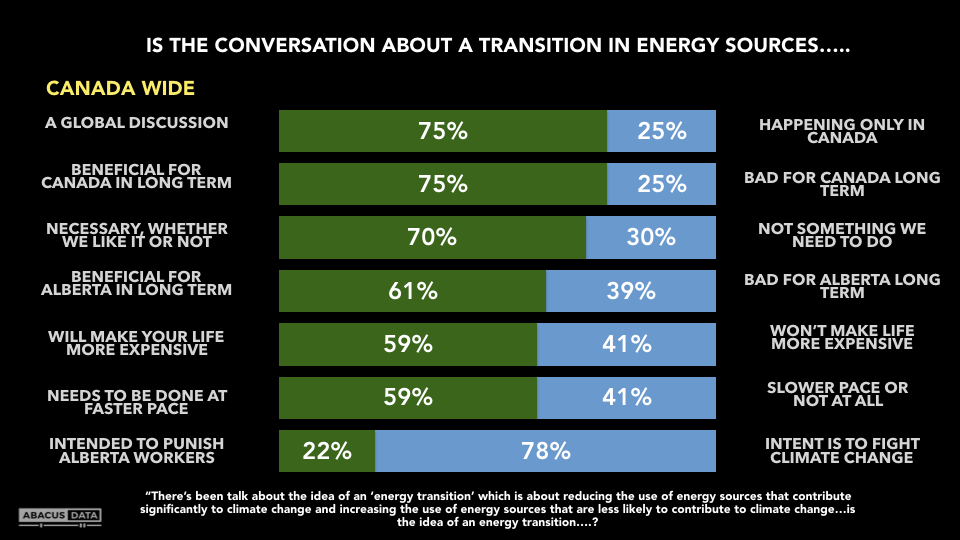 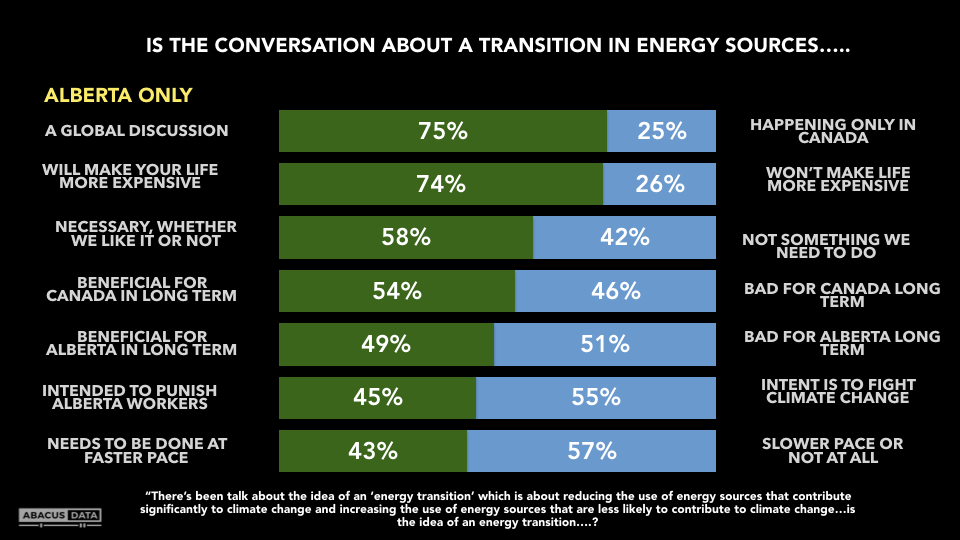 ⦁ 71% say an energy transition is certain or likely to happen, including 63% in Alberta. 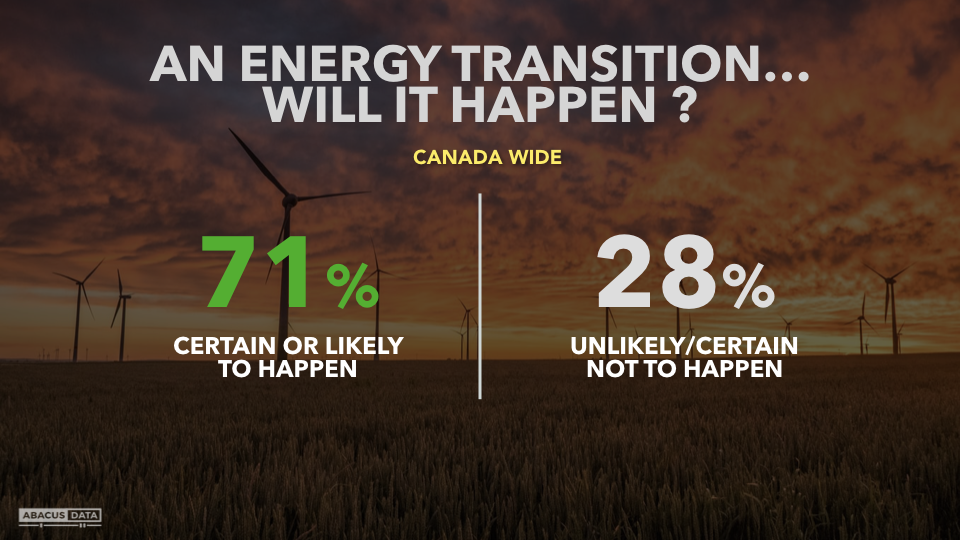 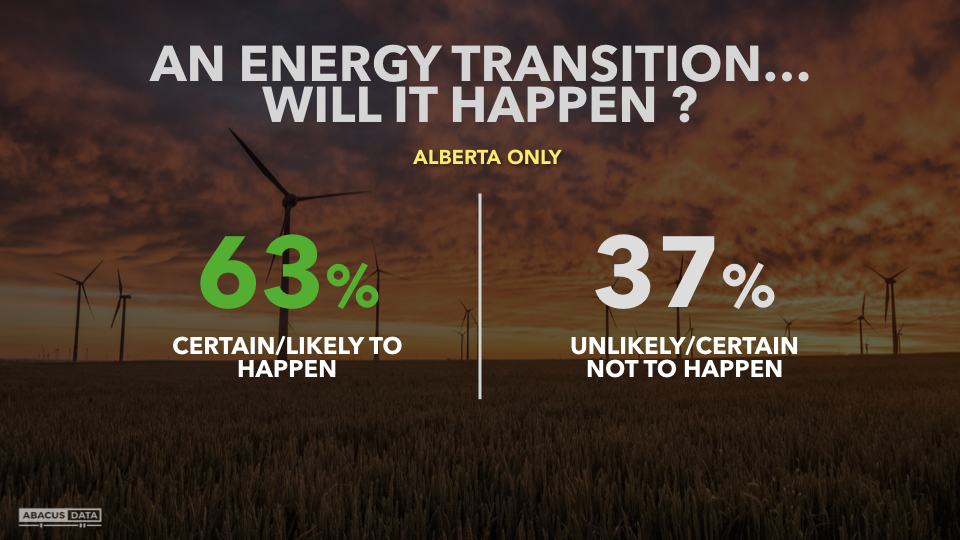 ⦁ 70% say an energy transition is necessary, including 58% in Alberta.

⦁ 68% believe Alberta Premier Jason Kenney opposes an energy transition (same percentage in Alberta as across the country). However, 72% across Canada and 60% in Alberta would prefer to see Premier Kenney find ways to shift Alberta’s economy over time because “global demand will change and Alberta will be left behind if the province is more dependent on oil”. Just 32% nationally and 40% in Alberta would prefer to see Mr. Kenney “reject the idea of an energy shift and promote growth in Alberta’s oil sector”, instead. 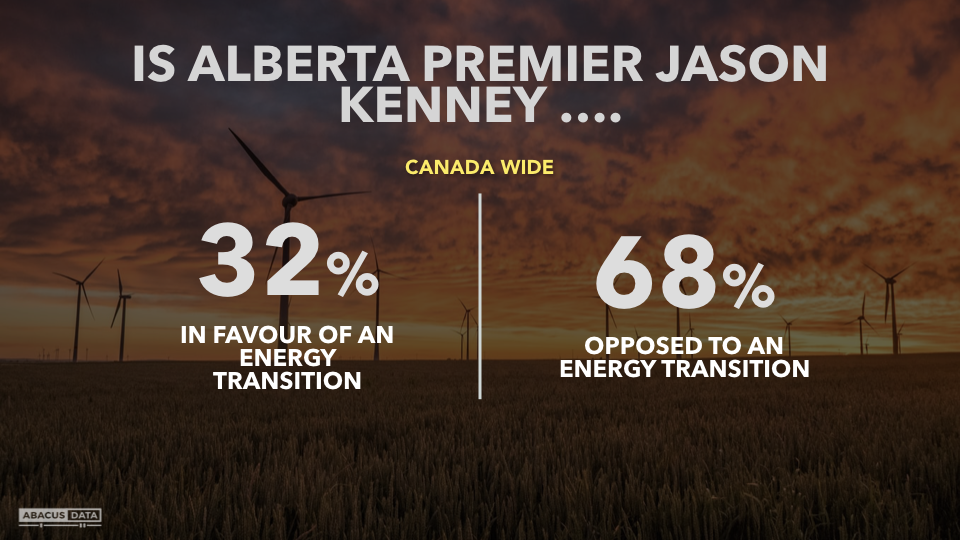 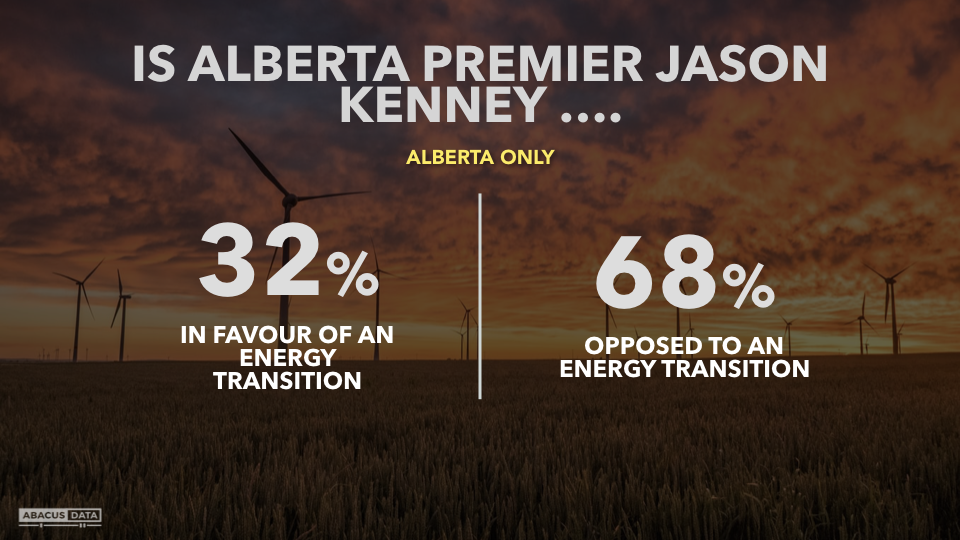 ⦁ When it comes to expectations of the federal government, Canadians generally (68%) prefer to see Ottawa offer help for Alberta’s workers to build new areas of economic opportunity, compared to 32% who would rather see Ottawa do more to help protect and grow Alberta’s oil sector. In Alberta, opinion is evenly split. 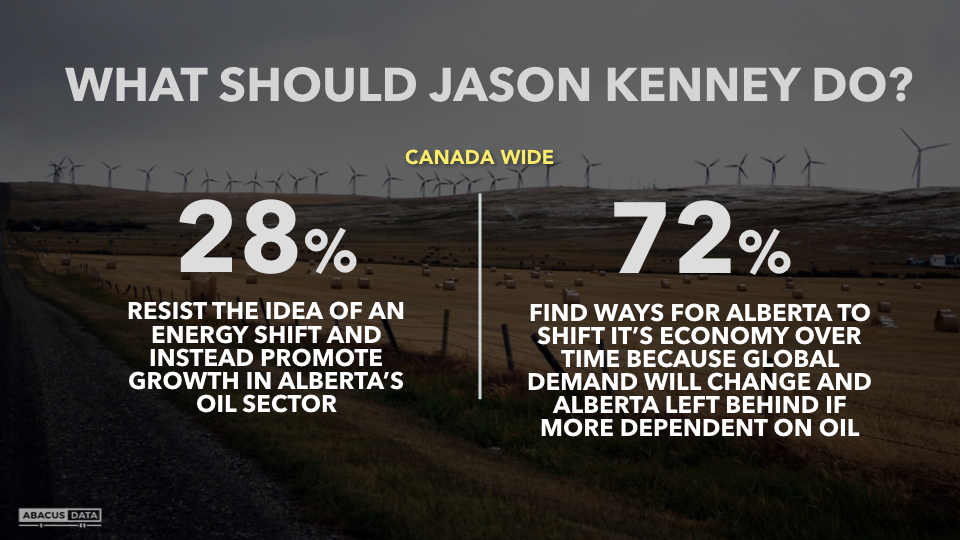 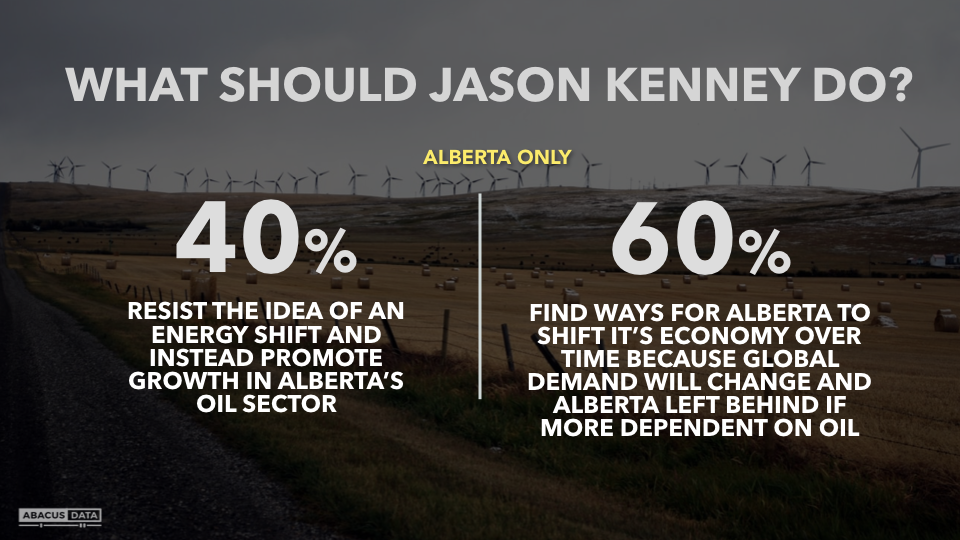 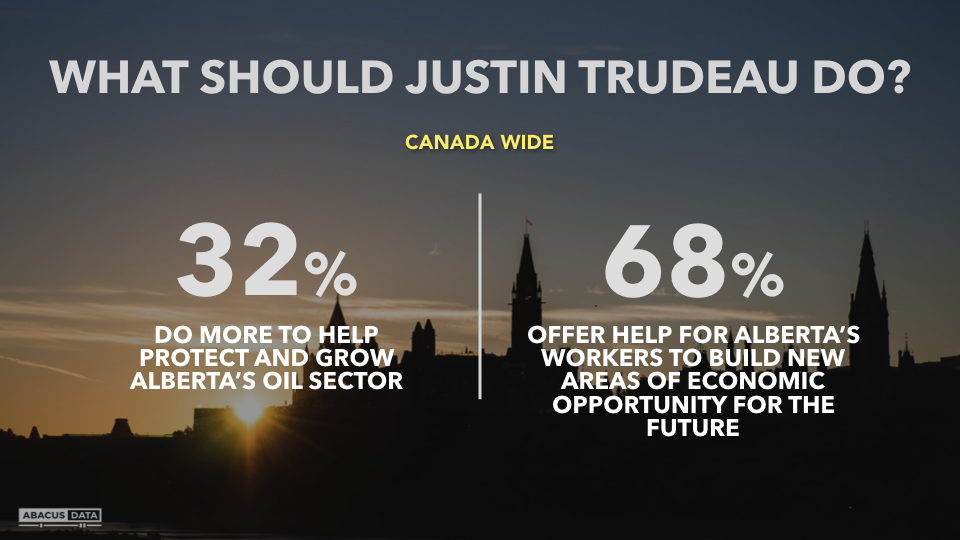 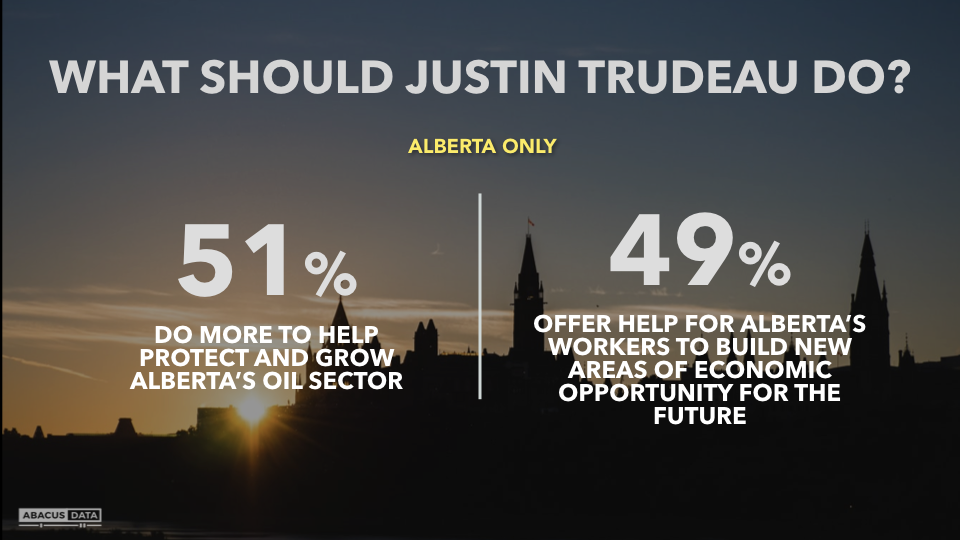 QUOTES
“A lot of the political conversation about an energy transition has involved the suggestion that an energy transition is anti-Alberta, or something happening only in Canada, or a thing that could be stopped by a more pro-oil federal government. But Canadians and most Albertans don’t see it that way – they believe whatever disruption a transition will cause is necessary and inevitable, and they want governments to work together on a plan to adapt our economy, not debate whether we need to or not.”

“Canadians recognize the facts on the ground: climate change is here, and the clean energy transition is happening with or without us. A majority of Albertans realize this too, and half of them believe it will actually benefit Alberta. A sustainable future for ourselves, our kids, and our economy—that’s something Canadians can agree on. We’re not as divided as some would have us believe.”

The survey was conducted online with 1,848 Canadian adults from December 12th to 19th, 2019. A random sample of panelists were invited to complete the survey from a set of partner panels based on the Lucid exchange platform. These partners are typically double opt-in survey panels, blended to manage out potential skews in the data from a single source. The margin of error for a comparable probability-based random sample of the same size is +/- 2.28%, 19 times out of 20.  The data were weighted according to census data to ensure that the sample matched Canada’s population according to age, gender, educational attainment, and region. Totals may not add up to 100 due to rounding.