We just completed a national survey of 2,000 Canadians eligible to vote in the current federal election (August 24 to 29, 2021). Here’s what we are seeing: 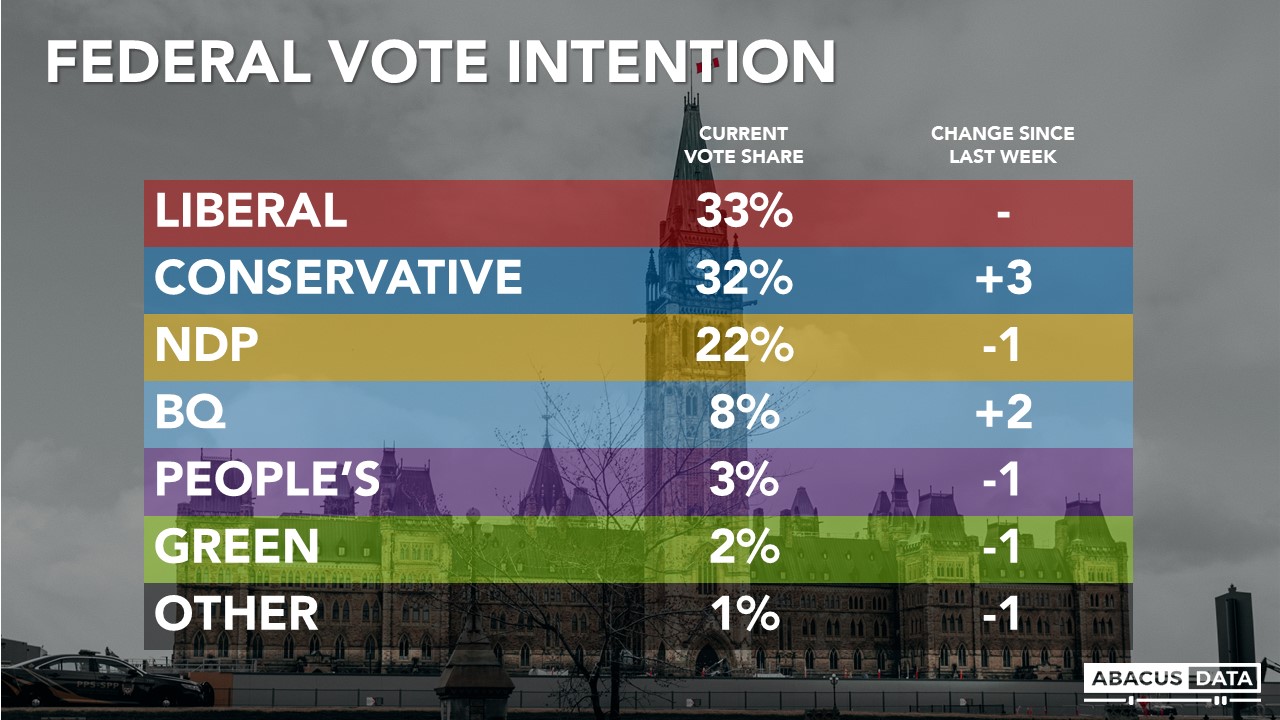 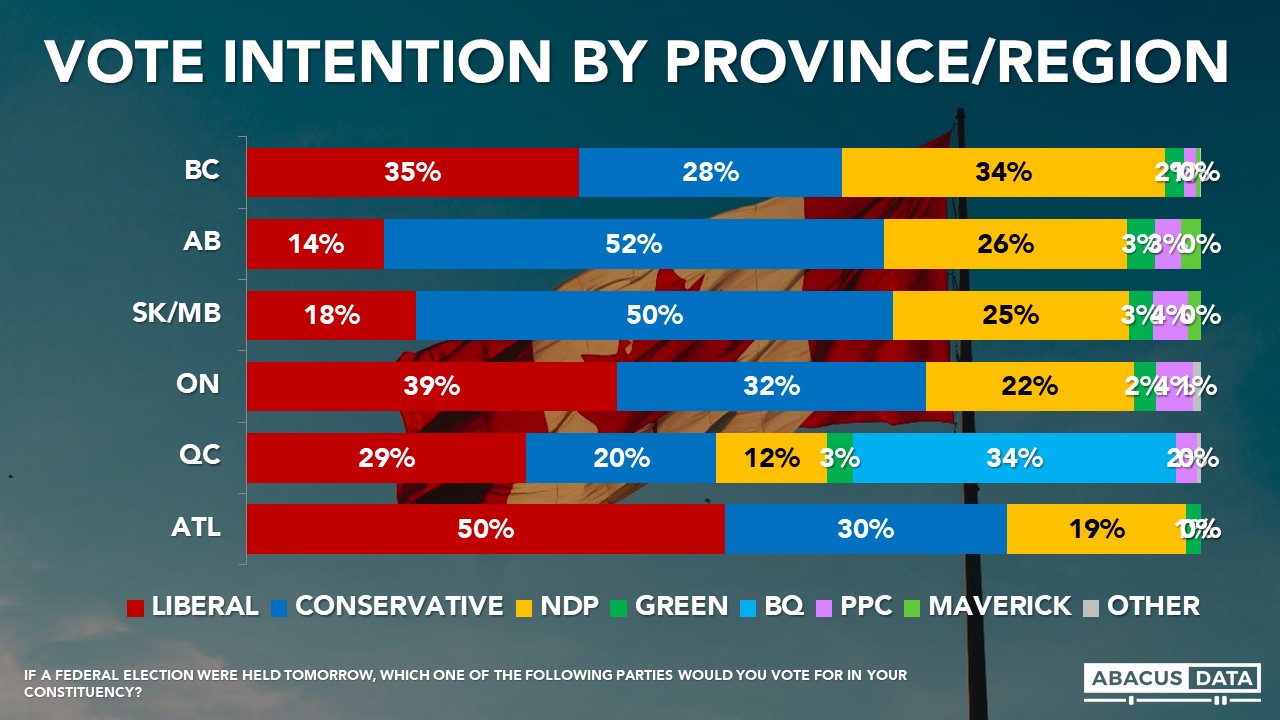 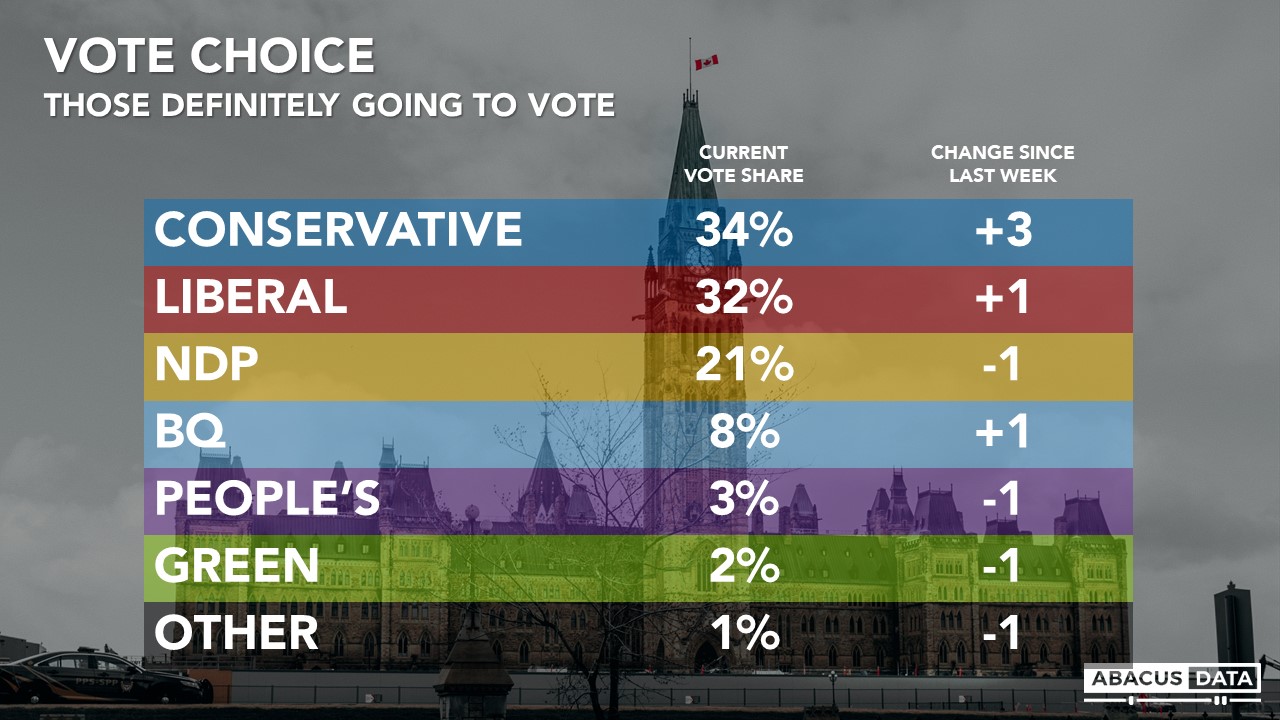 TODAY VS. 2019: HOW WELL ARE PARTIES HOLDING THEIR VOTE?

The Conservatives are holding 87% of their 2019 vote, the rest has been scattered with no more than 4% going to any other party.

Overall, 21% of decided respondents say their second choice is the NDP, followed by the Liberals (18%) and the Conservatives (10%). 28% say they have no second choice.

Conservative voters are the least likely to have a second-choice preference. Their second choice is a bit more likely to be NDP (19%) or People’s Party (16%) than Liberal (15%)

VACCINATION STATUS AND THE VOTE

Almost four in ten of those with a vote preference (38%, down 2 points from last week) say they could change their mind about how they will vote come Election Day, including at least a third of voters in every region, almost half of voters under 30 (47%). NDP and Green supporters are the most likely to be open to switching. 32% of Conservative supporters might change, 36% of Liberal voters, 43% of BQ supporters, and 45% of NDP voters. 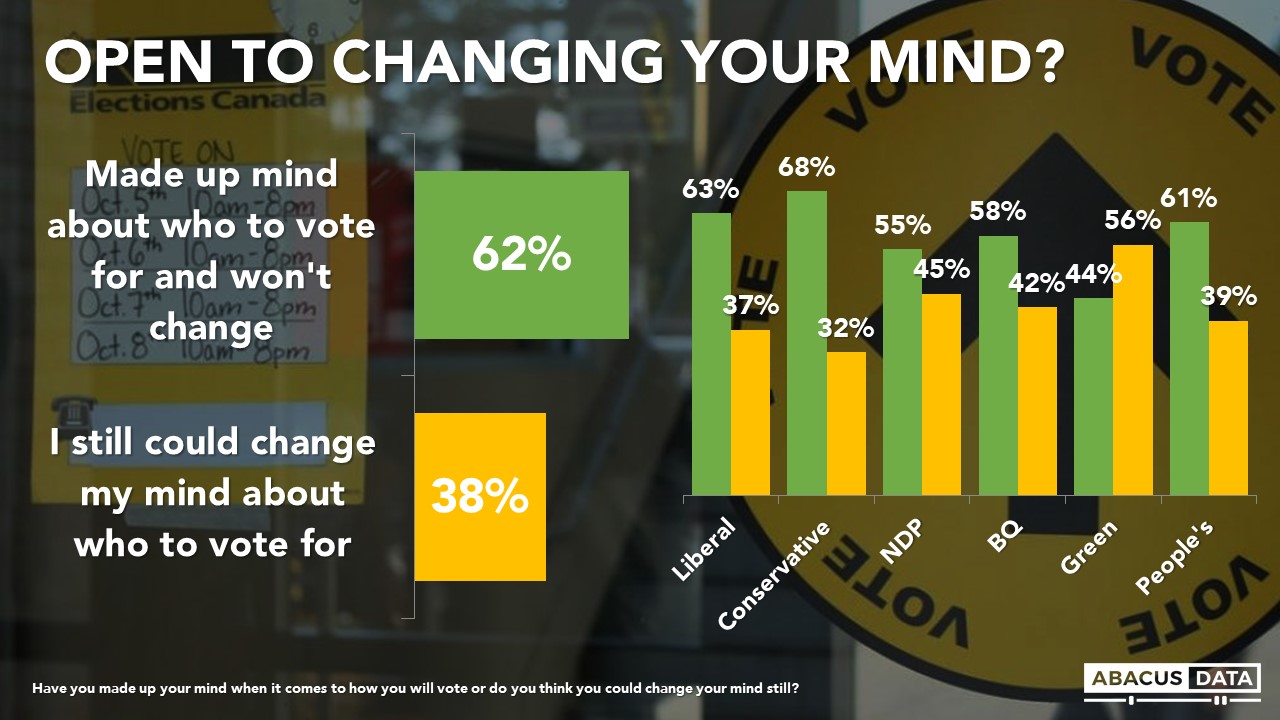 Among BQ voters 61% would prefer the Liberals win, compared to 39% who would like the Conservatives to come out on top.

Among Liberal/Conservative switchers two thirds (64%) would prefer to see the Liberals win.

Among vaccine refusers, 73% would like the Conservatives to win while 64% of those fully vaccinated would prefer the Liberals to win.

Those who would prefer the LPC to win but think the Conservatives are going to win make up 2% of the electorate. This is unchanged from last week and is a good indicator of the potential of strategic voting. 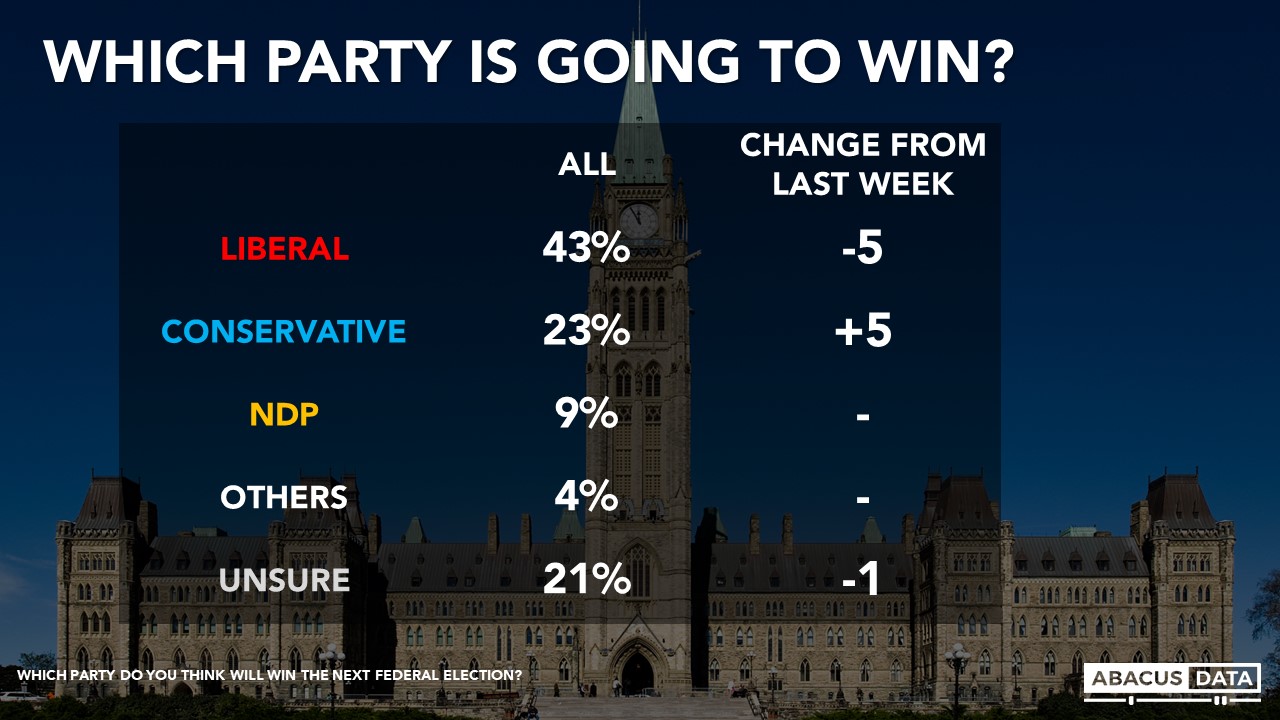 Justin Trudeau enjoys a positive impression among 40% and negative impressions among 43%, for a net score of -3. This is unchanged from last week. Regionally, Mr. Trudeau’s net favourables are +2 in BC, -48 in Alberta, -32 in SK/MB, +1 in Ontario, +7 in Quebec, and +22 in Atlantic Canada. Among Liberal/NDP switchers Trudeau is +65. Among Liberal/Conservative switchers he is +46. Trudeau is +2 among the fully vaccinated and -72% among vax refusers. 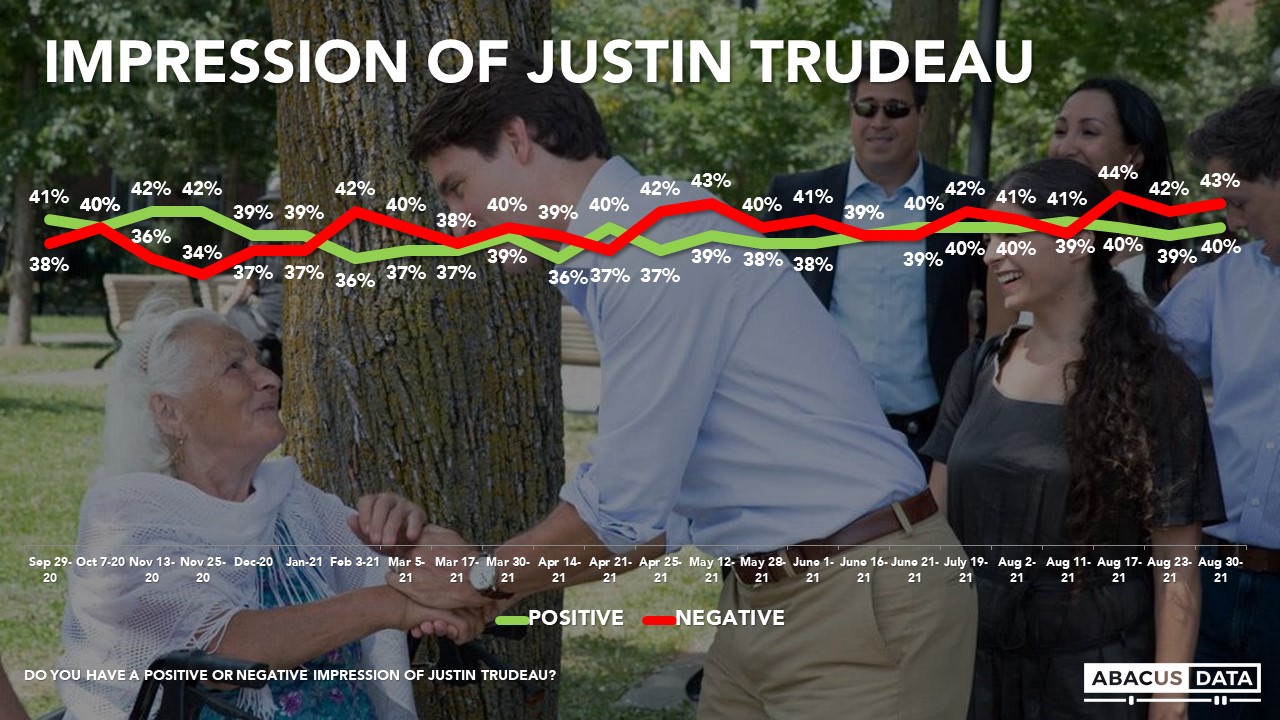 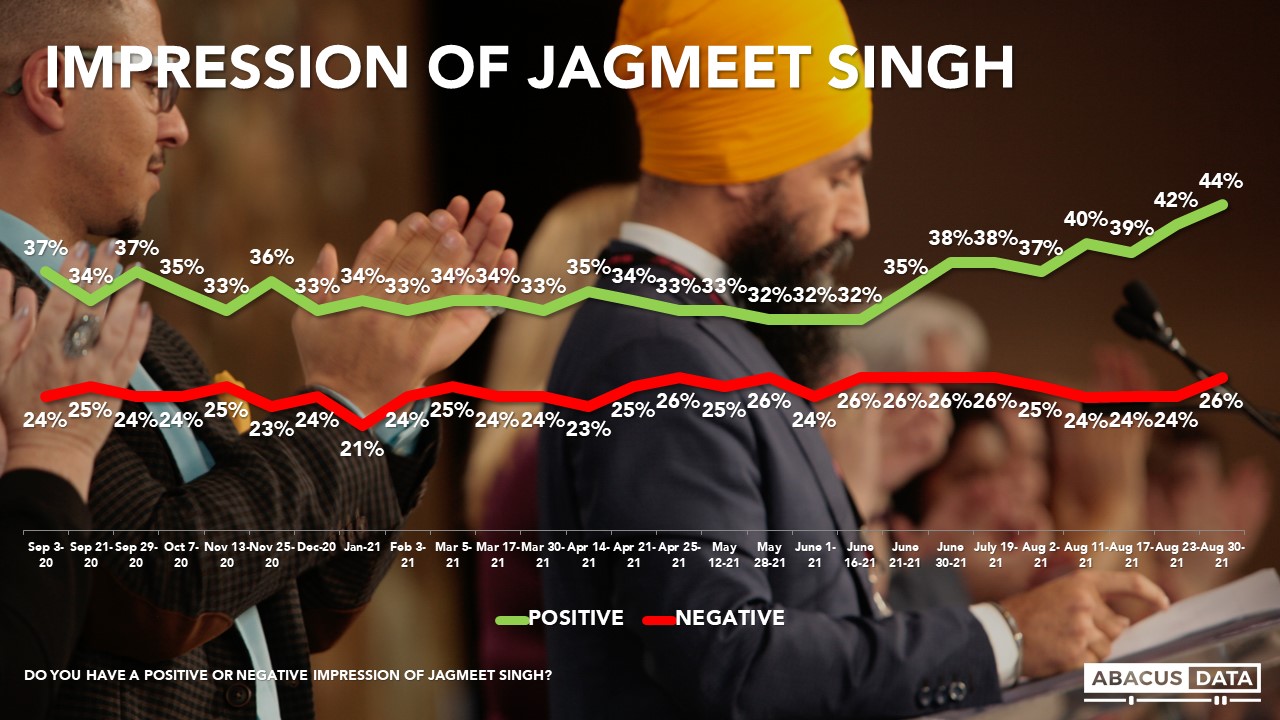 Today 29% have a positive impression of the Conservative leader Erin O’Toole (+3 from last week) while his negatives are at 42% for a net score of -13, showing another week of gains.

Regionally, Mr. O’Toole’s net favourables are -24 in BC, +7 in AB, +2 in SK/MB, -15 in Ontario, -13 in Quebec, and -15 in Atlantic Canada. Mr. O’Toole’s improvements so far seem to be concentrated more in the Prairies and among Conservative voters who were soft in their support before the election was called. Among Liberal/Conservative switchers O’Toole is +44. O’Toole is -13 among the fully vaccinated and -9% among vax refusers. 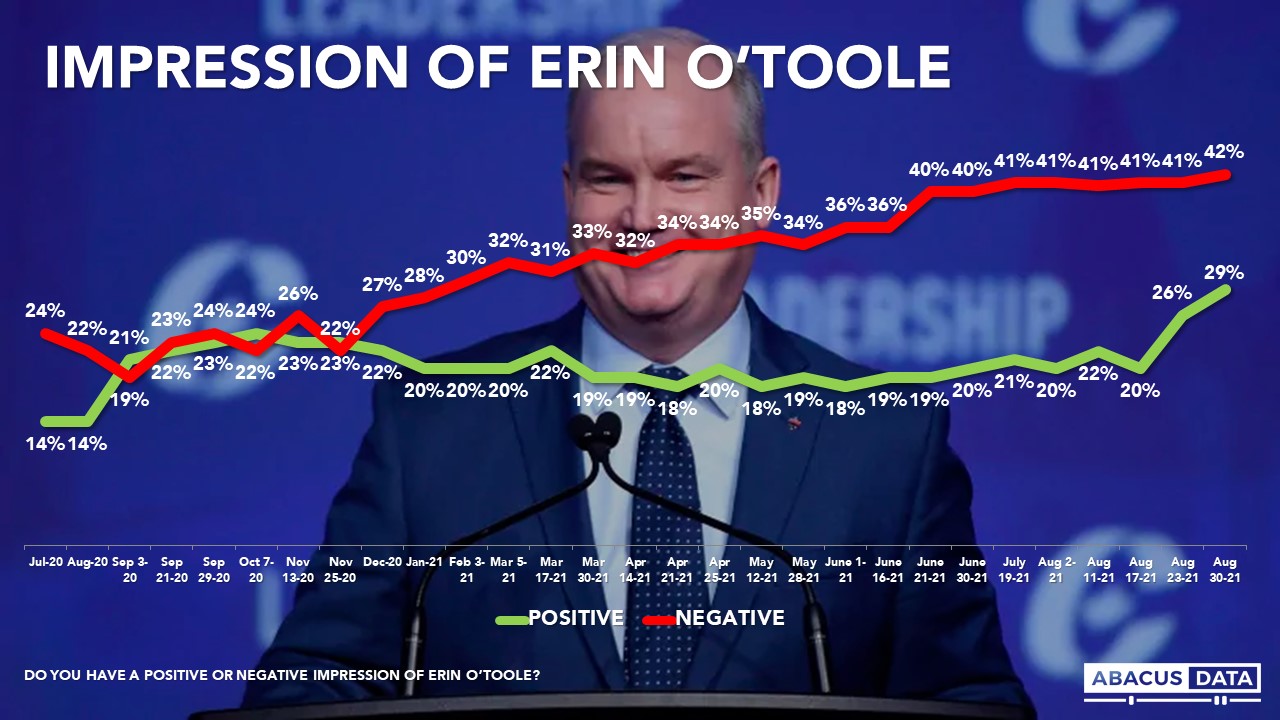 If we compare Mr. O’Toole’s image with that of Mr. Scheer around the same time of the 2019 election, we find almost identical results. Mr. O’Toole is as unpopular with non-Conservative voters as Mr. Scheer was and as popular with Conservatives as he was at this point in the campaign. 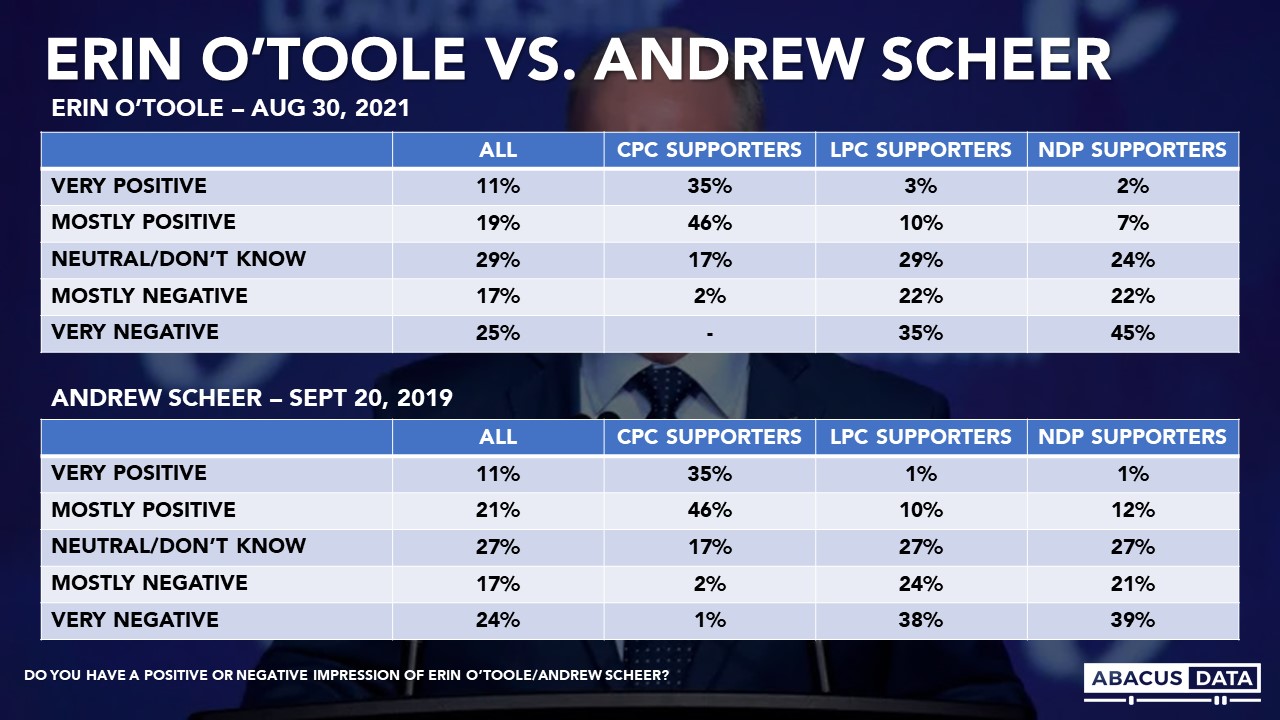 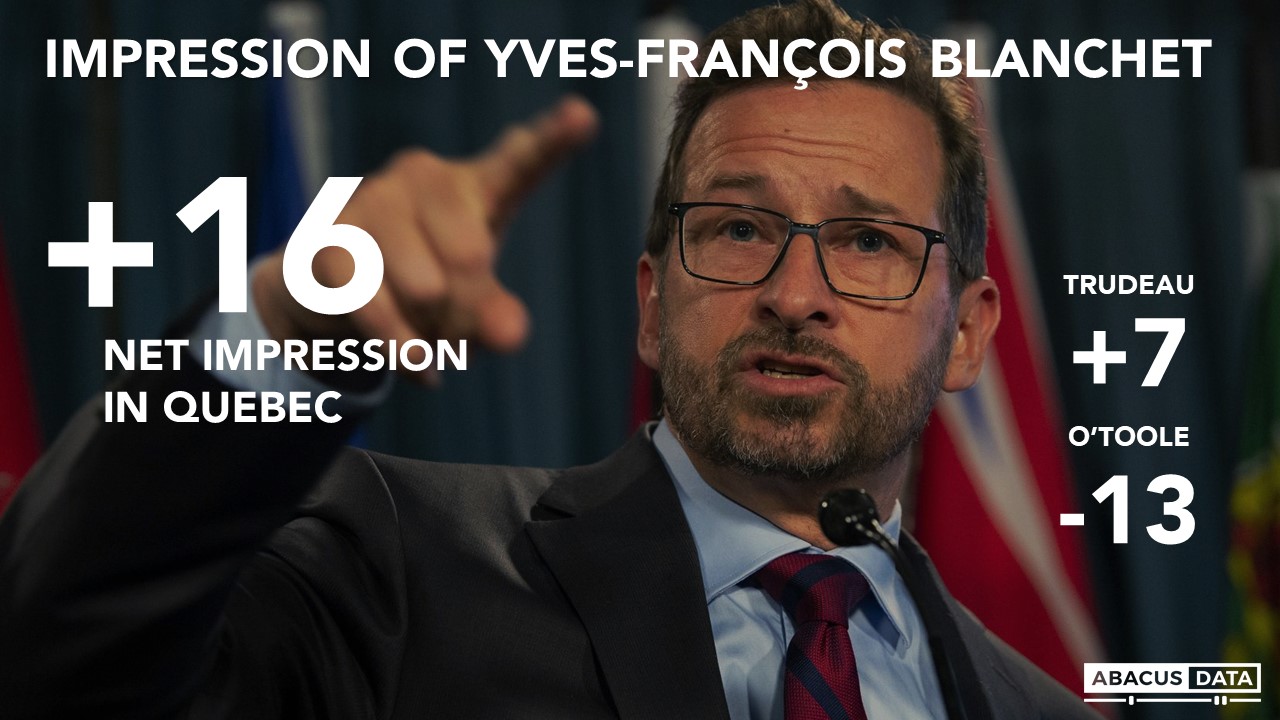 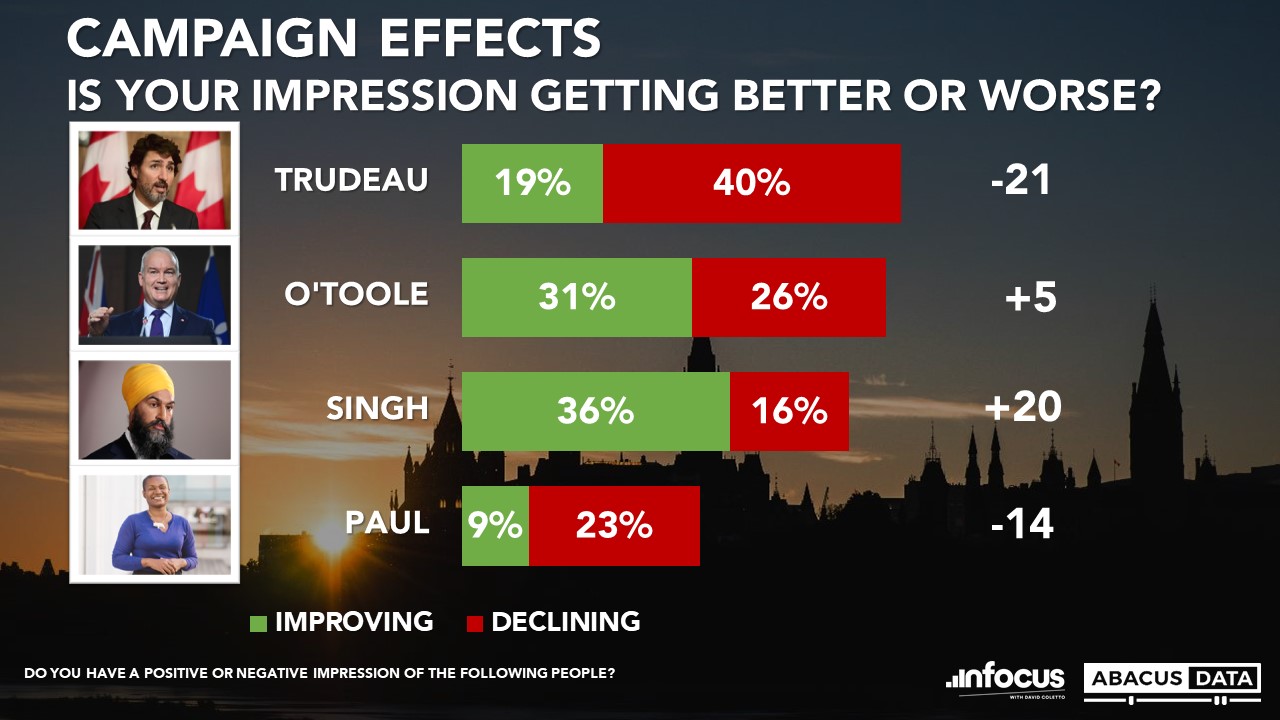 Today 40% approve of the job being done by the Trudeau government, while 43% disapprove. Regionally, the net approval rating for the federal government is +3 in BC, -44 in Alberta, -34 in Saskatchewan and Manitoba, +2 in Ontario, +4 in Quebec, and +25 in Atlantic Canada. 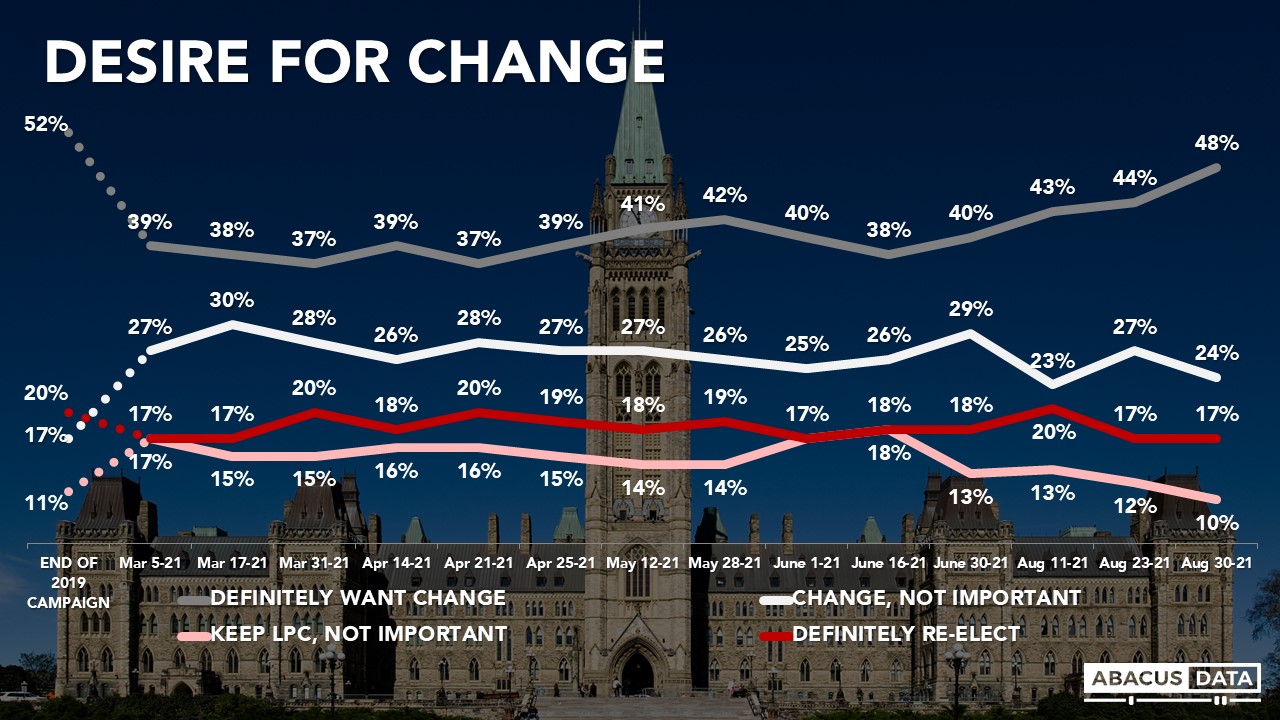 The vote preference by change group is important to understanding the election. Among those who say they want change but it isn’t important (24% of the electorate at the moment), the Liberals are slightly ahead of the NDP. As long as the Liberals can win a large share of this group, they can be re-elected.

But if those in this group migrate up to “definitely want change”, it’s far less likely they will vote Liberal. As perceptions about the competitiveness of the election shifts, the split in these groups could also change. 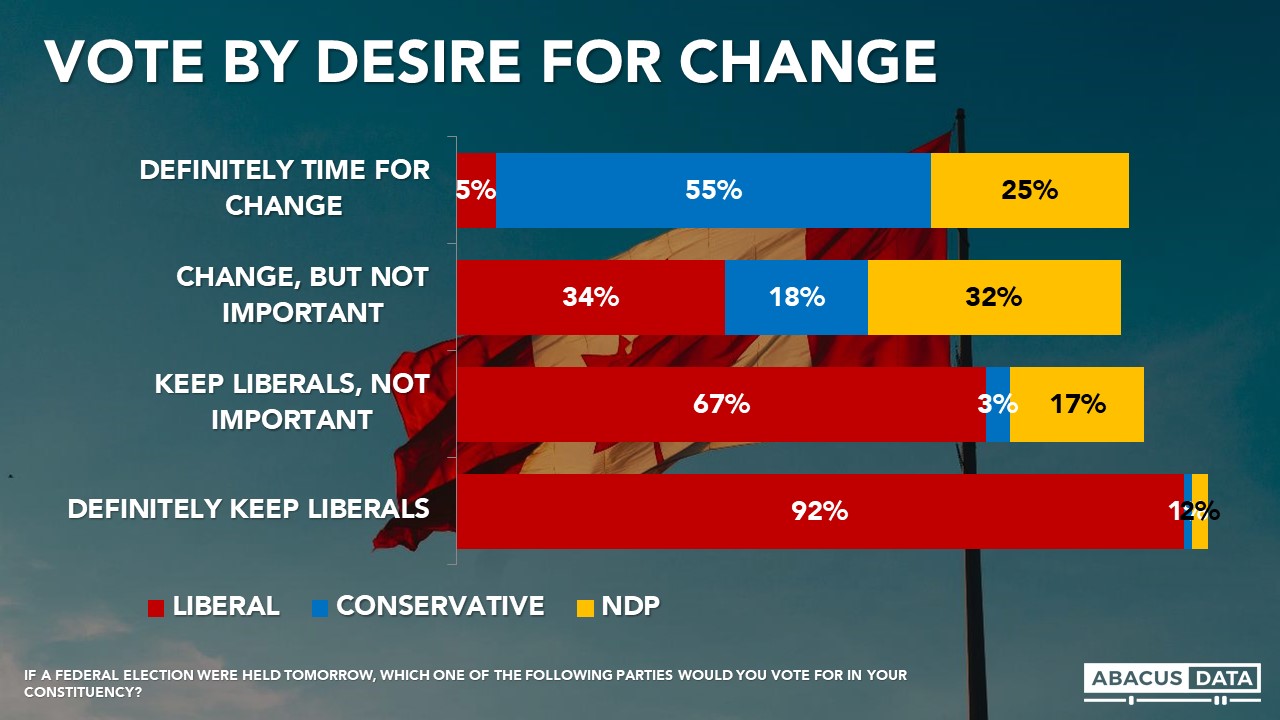 Today, 36% of voters would prefer Justin Trudeau be PM after the election, 32% would prefer Erin O’Toole, and 25% Jagmeet Singh. O’Toole is preferred in the Prairies by a wide margin with Mr. Trudeau behind Mr. Singh. 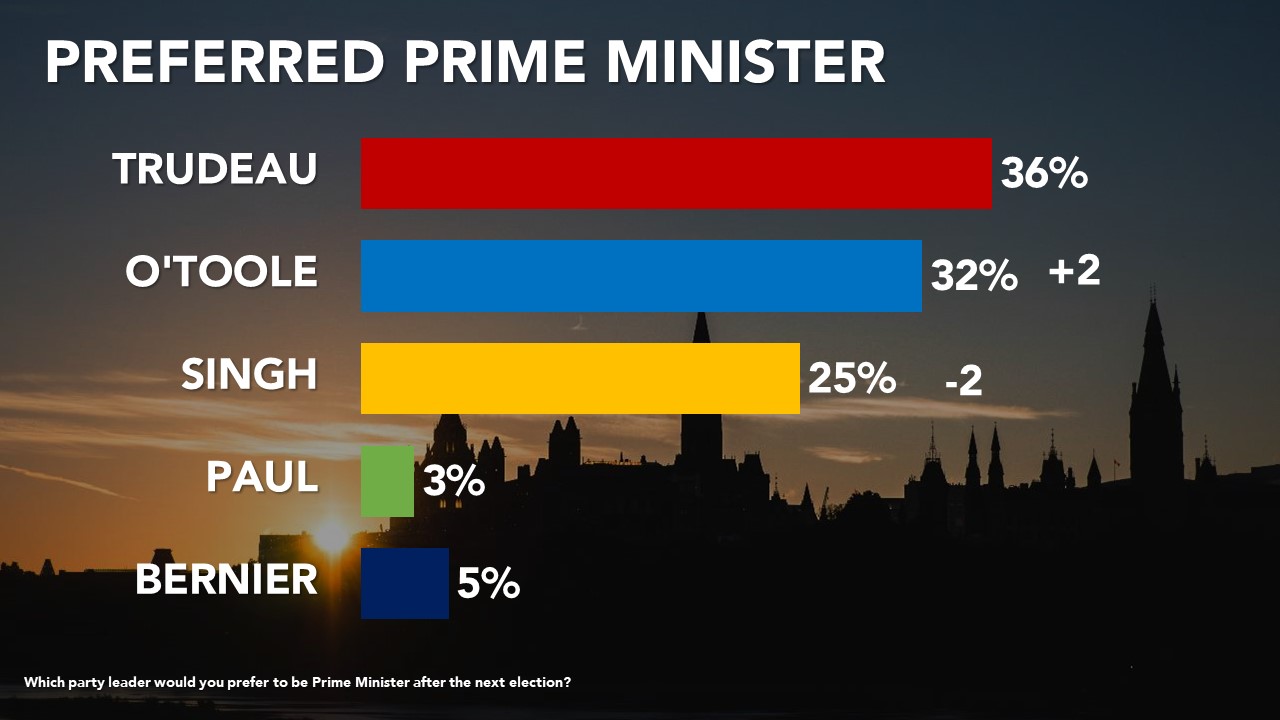 According to Bruce Anderson: This race is about ready to kick into a higher gear, and the outcome is unpredictable. The key variables I’m watching are these:

1. Erin O’Toole has had a successful start and his gains have probably begun put him and his party under a different level of scrutiny – and made this election feel less like a referendum on Justin Trudeau and more like a conversation about the different choices on offer. Whether he and his party will fare well through that scrutiny is an unknown. The ugly protests of anti-vaxxers are a cloud that certainly does more to threaten Conservative prospects, than Liberal chances.

2. The NDP has made gains at the expense of both the Liberals and the Green Party. Will the gains hold, even as voters start to focus on the prospects of a Conservative government? If they don’t, the benefit will accrue to the Liberals, disproportionately. If the election feels like it comes down to a Trudeau or O’Toole government, soft NDP voters show a lopsided preference for the former.

3. The Liberals have been feeling the brunt of frustrations that build up over years for an incumbent government and probably extra frustrations because of the mood impacts of the pandemic. Enough voters appreciate their record and approach to prefer them to the Conservatives, by a wide margin – making that that the apparent choice and sharpening the contrast is the work that they have cut out for them in the next three weeks.

According to David Coletto: This election is now close and competitive, and the outcome is far from clear.

We see evidence that Conservative supporters are re-engaged, the desire for change is trending up, while Liberal supporters have become less interested and engaged in the election since it started. That lends itself to a good environment for Mr. O’Toole and the Conservatives.

However, while the Conservative campaign has been able to animate past supporters, it hasn’t yet made much progress in converting past Liberal, NDP, Green, or BQ supporters– hence why it’s stuck at around its 2019 vote share. It’s almost like we have returned to normal – the political environment pre-pandemic.

The only difference remains the stronger position for the NDP and Mr. Singh. Despite more viewing Mr. Singh positively than last week, the NDP’s vote share has stalled. More people are open to voting NDP (50%) than at any point in the past two years, but they remain hesitant to support the party outright. That could change, but as the dynamics of the campaign shift away from a focus on Mr. Trudeau and why the election was called, to what a potential Conservative government might or might not do, the risk for the NDP’s support to be squeezed will increase.

By suggesting he’d be open to working with Mr. O’Toole if the Conservatives win the most seats, Mr. Singh may be playing with fire given that 82% of NDP supporters would prefer a Liberal government over a Conservative one.

The survey was conducted with 2,000 Canadian adults eligible to vote from August 24 to 29, 2021. A random sample of panelists were invited to complete the survey from a set of partner panels based on the Lucid exchange platform. These partners are typically double opt-in survey panels, blended to manage out potential skews in the data from a single source. 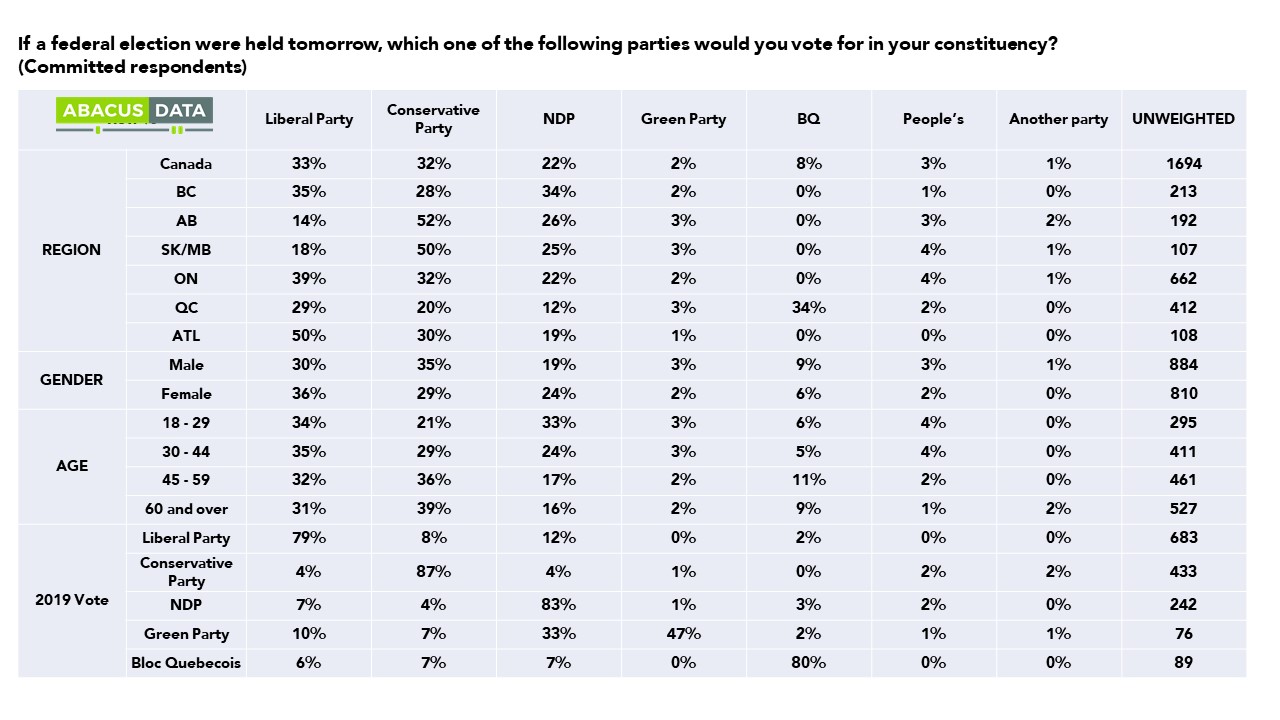 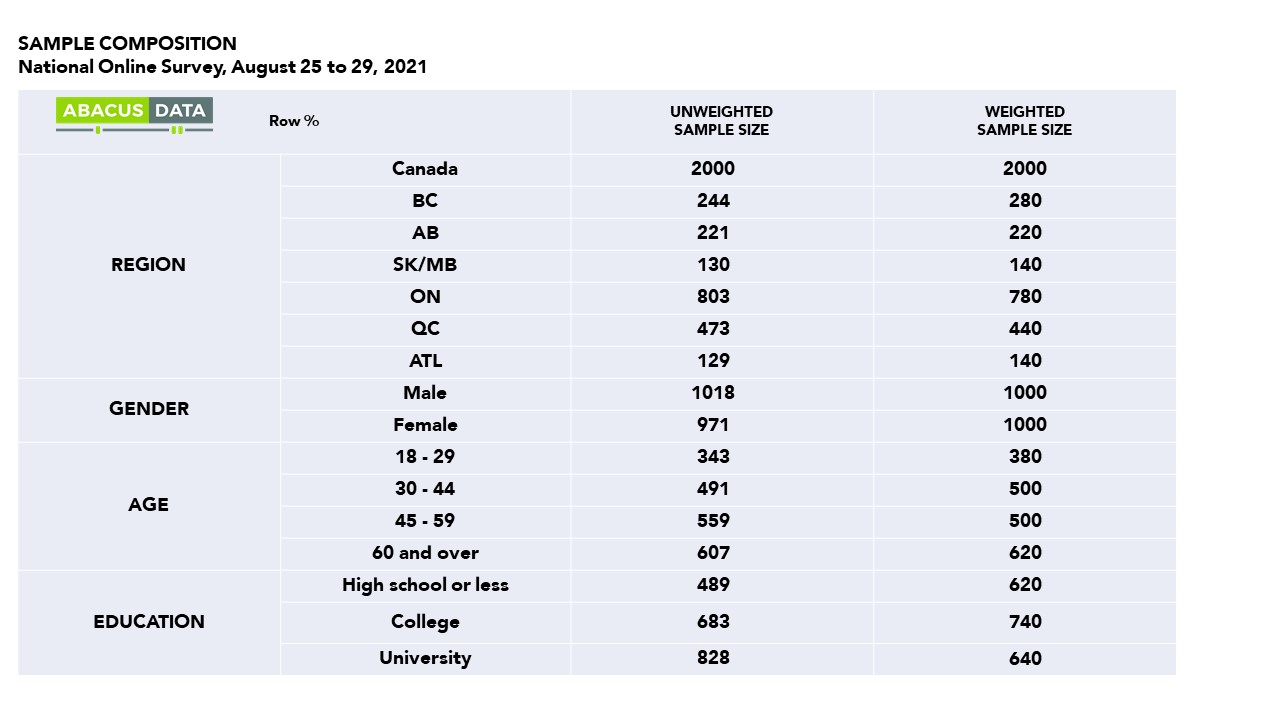