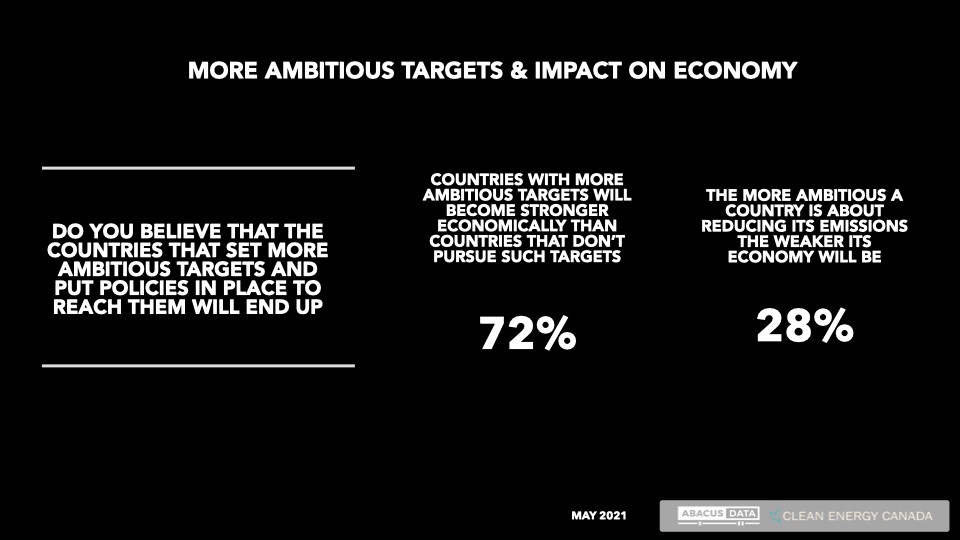 While believing ambitous targets are good for longer term economic competitiveness, many Canadians do not follow the debate about specific targets closely. Fully 85% said they had no real idea what Canada’s current emissions reduction target is. Among the 15% who offered an answer, just over half picked a number between 30% and 59%. The mean and median responses were both 40%. Canada’s recently announced new target is between 40% and 45% by 2030, compared to our 2005 levels.

Only 8% say they follow specific targets pretty closely. Another 52% say they have a general sense but don’t pay attention to targets per se. Finally, 41% say they find it pretty confusing and hard to keep track of the various targets under discussion. 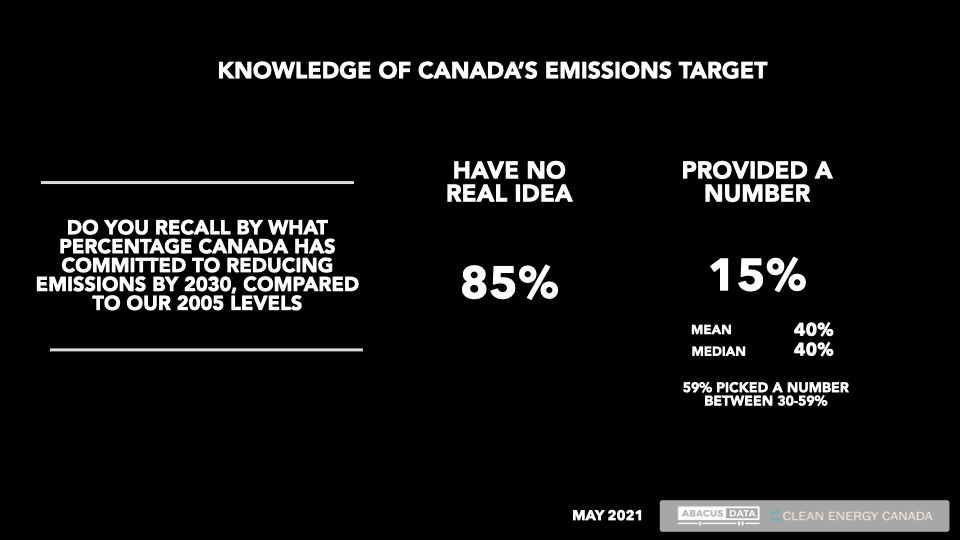 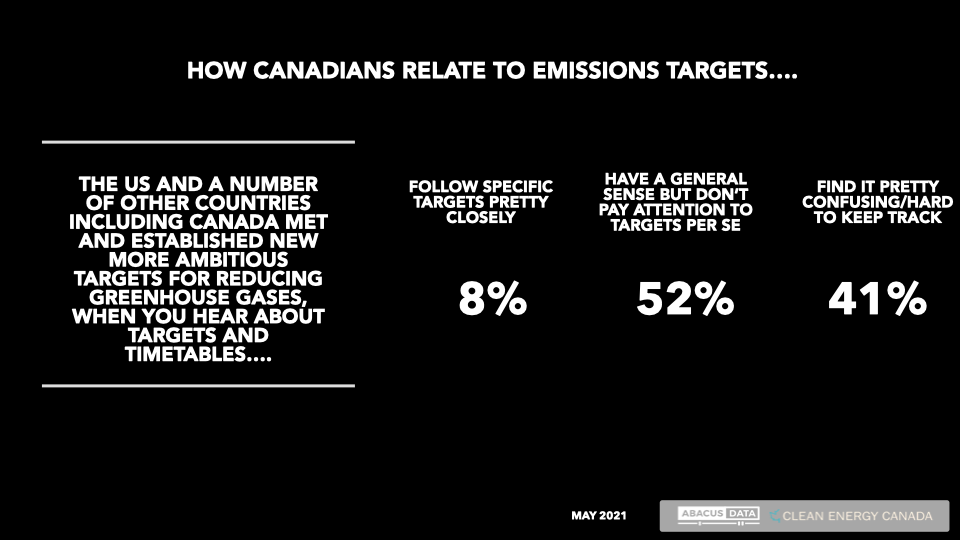 Most people want to know that there are goals and policies to back them up, but also recognize that knowing exactly how and which elements of innovation will affect change can be difficult. 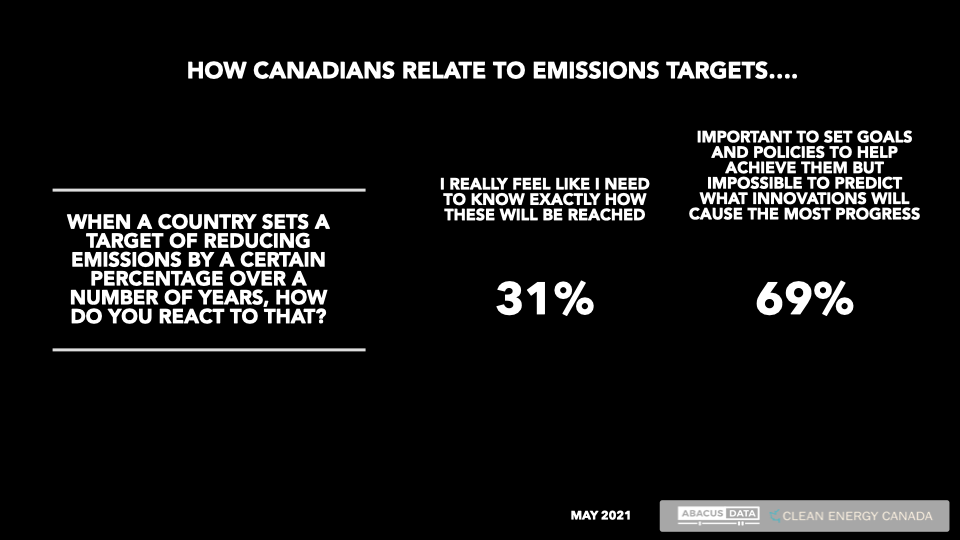 Based on what they know or guess are Canada’s emissions reduction targets, one in four (24%) people believe our targets are too ambitious, one in five say not ambitious enough (20%) and a slight majority (56%) say they are about right.

There are some notable differences in opinion on whether Canada’s ambition is set at the right level. People over 60 (43%), Albertans (43%) and Conservative voters (54%) are all more likely to say the target is too ambitious. Relatively few, and even only 35% of Green Party supporters, believe the target is not ambitious enough. 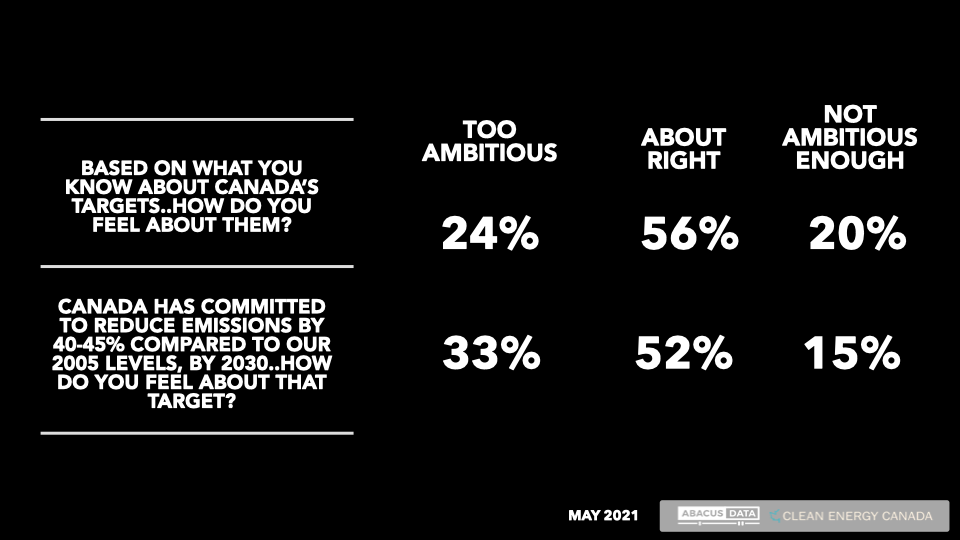 According to Bruce Anderson: “For several years, Canadians have been coming to the conclusion that emissions reduction was essential and urgent, and more recently they have become broadly of the view that this effort will yield economic opportunity – while lagging would reduce our competitiveness. At the same time, for most people this is a debate at a high level, few get drawn into a deeper conversation about specific targets and timetables.

Canadians believe that target setting with policy tools to help shape and catalyze change is a good approach for the country and recognize that innovation will play a major role in achieving targets.

Finding a level of ambition that makes most people feel comfortable is a challenge, given the nature of the country, but at this point in time most people seem to feel our national target is set at a level that is appropriate.”

According to Merran Smith, Clean Energy Canada’s executive director: “Two-thirds of Canadians either support the new, bolder climate target or say it could go even higher. At the same time, awareness of these long-term goals remains low despite all the press coverage. It goes to show you that numbers are seldom remembered. Canadians need to see the energy transition happening in front of them. They need to see their local buses and garbage trucks running on electricity. Their need to see their friends getting jobs in the clean energy sector. The action we take today—and not just our promises for tomorrow—is what will really stick with people.”

The survey was conducted with 1,500 Canadian adults from May 7 to May 12, 2021. A random sample of panelists were invited to complete the survey from a set of partner panels based on the Lucid exchange platform. These partners are typically double opt-in survey panels, blended to manage out potential skews in the data from a single source.